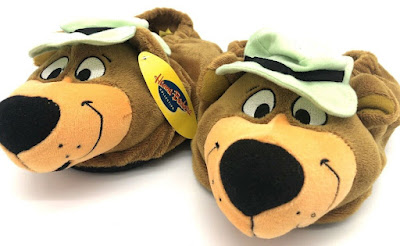 Anyone who has ever acquired a replacement for a much-missed toy or comic from their childhood knows the sense of satisfaction that comes from doing so.  I’ve been lucky enough to obtain quite a number of doppelgangers of items I owned when young, but sometimes I’ve had to settle for the same type of item, rather than an exact ‘duplicate’ – simply because some things are so rare, it’s almost impossible to easily locate them.

Before I managed to find (or afford) a JR21 TB2 toy, I purchased other plastic TB2s in a quest to replace my original with something very similar.  First there was an Imai model kit, then there was a Matchbox TB2 playset, followed a few years later by a Vivid Imaginations version.  All three had one thing in common – they were actually larger than the JR21 incarnation, and were probably better-made toys.

Same goes for my Dinky TB2.  Before I acquired a replacement for my original, I bought the Matchbox diecast toy from the early ’90s to fill that TB2-shaped space in my life.  Had I never been able to replace the Dinky one, the newer version would have sufficed (I suppose), because it was replacing one diecast toy with a very similar one, even if not exactly the same.

Sometimes I have to admit defeat though (while hoping it’s only temporary), and such an example is my Yogi Bear Hallowe’en mask, as well as my Yogi Bear slippers, which I had when I was about 3 or 4 years of age.  My original mask was Papier-Mache, and I’d be surprised (though delighted) if many (or even any) survived to the present day, on account of just how fragile they were.  The slippers looked like normal slippers, but had Yogi’s head on top of each one.  I don’t mean a picture of Yogi, I mean actual 3D-shaped heads sitting on the front top of each slipper.

I’ve been searching on ebay for years, but never been fortunate enough to locate them.  Similar ones, yes, but not the same as my originals.  So I’ve had to settle for a plastic Hallowe’en mask of Yogi from the ’90s, and a pair of relatively modern-day slippers which are definitely and unmistakably Yogi, though nothing like the ones I had as a kid.  However, at least I can say I had a Yogi mask and slippers as a bairn, and have a Yogi mask and slippers as an adult (allegedly).

I’ve shown the mask before, so you’ll have to settle for a couple of the seller’s pics of the slippers, which are winging their way to me.  I don’t know if they’ll even fit, but as long as I can hang them on the wall just to look at from time-to-time, I’ll be happy.

Has there ever been an item from your childhood that you’ve been unable to replace and had to settle for a ‘stand-in’, or would you rather do without if you couldn’t have an exact example of the original you once owned?  If so, let’s hear all about it. 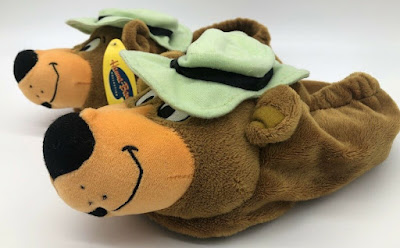 The ebay photo below is slightly closer, slipper-wise, to the ones I had as a kid, except for the fact that these ones have ‘flat’ representations of the bold bruin, whereas mine had actual rubber Yogi heads, as if lifted from a model, and didn’t have furry parts. 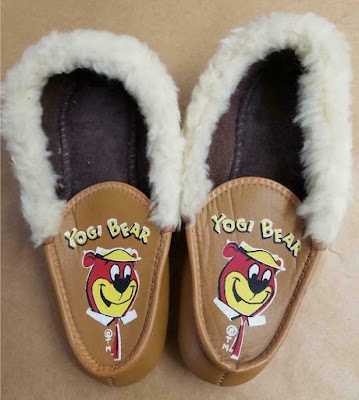 Black Clover Cliffhanger Welcomes Back Yuno With Major Save