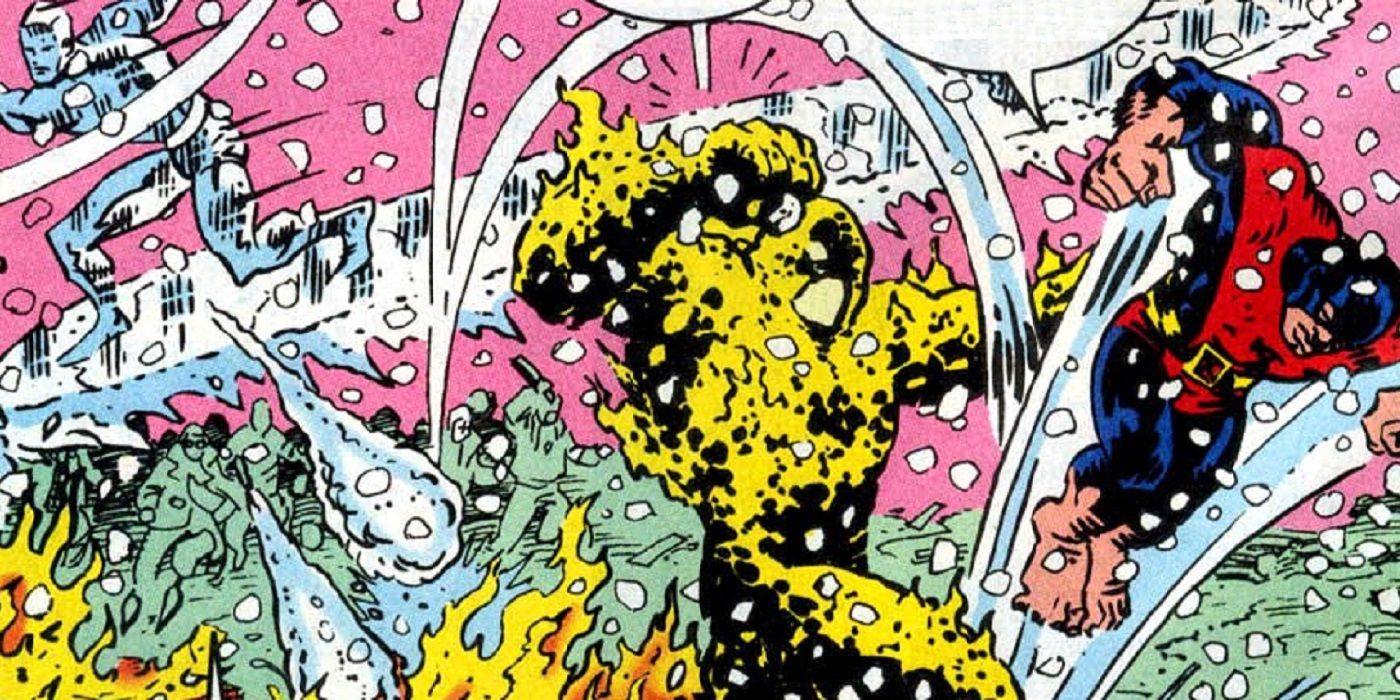 Today, learn about how an X-Men villain took nearly thirty years to debut after being promised in a 1960s “next issue” box and see how that debut was a Christmas adventure set in both the past AND the present!

And now, a bit late, Day 10 will be opened (once opened, the door will feature a panel from the featured story)… 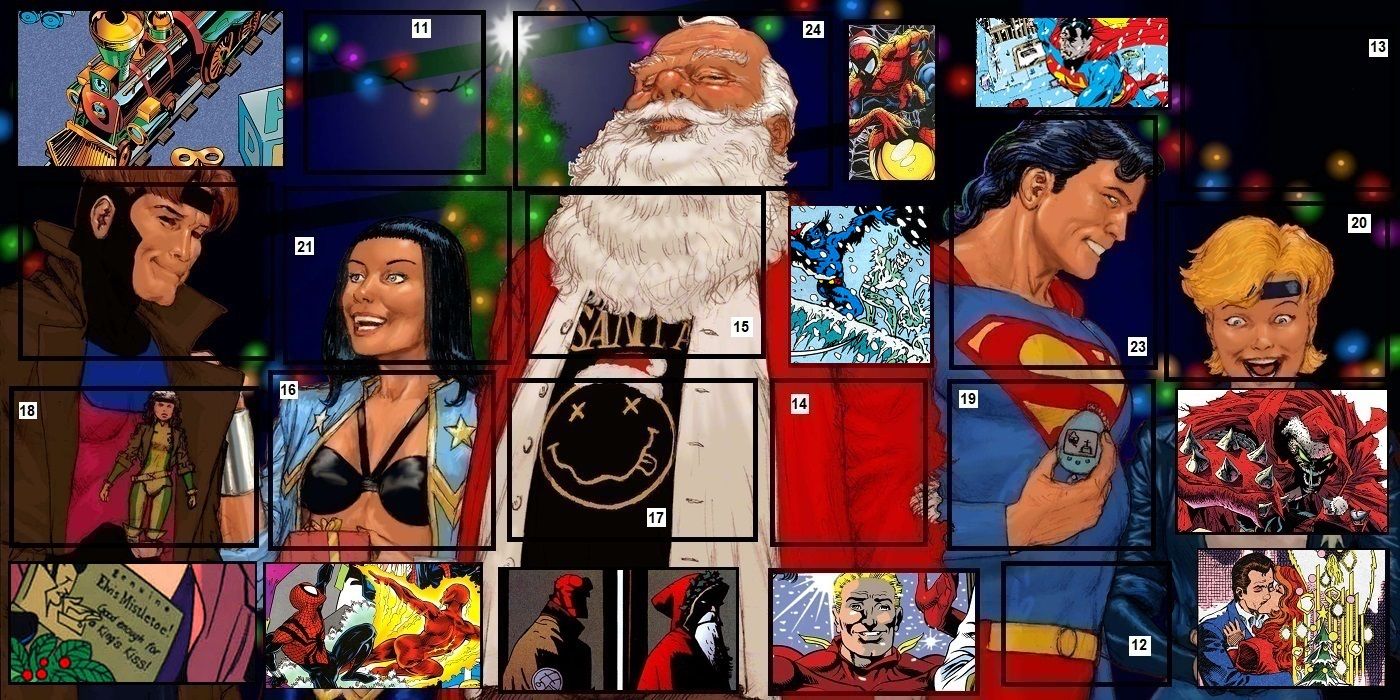 You know something funny? Well, maybe more STRANGE funny rather than “Ha ha” funny. Lots of crazy things have happened to the X-Men over the past 30 years, and yet they don’t seem to moan as much about it as they did during the 1990s. Perhaps it was because the 1990s was the first time that things got QUITE so bad for the X-Men? Perhaps, but even there, it’s weird, since had been bad for them in the past. They had had the Mutant Massacre, they were believed to be dead there for a couple of times, the Dark Phoenix Saga, but anyhow, during the 1990s, every other X-Men Christmas story from this time opens up with “Oh man, it is so bad to be an X-Men right now.” It’s just interesting.

That, of course, is the set-up for this excellent Christmas story from the 1994 Marvel Holiday Special, where Beast and Iceman are bemoaning how depressing the holiday feels. They can’t even enjoy the cheesy (literally) TV Christmas special that they watch every year. Their complaint session is interrupted by news of a lava monster kidnapping Santa Clauses… 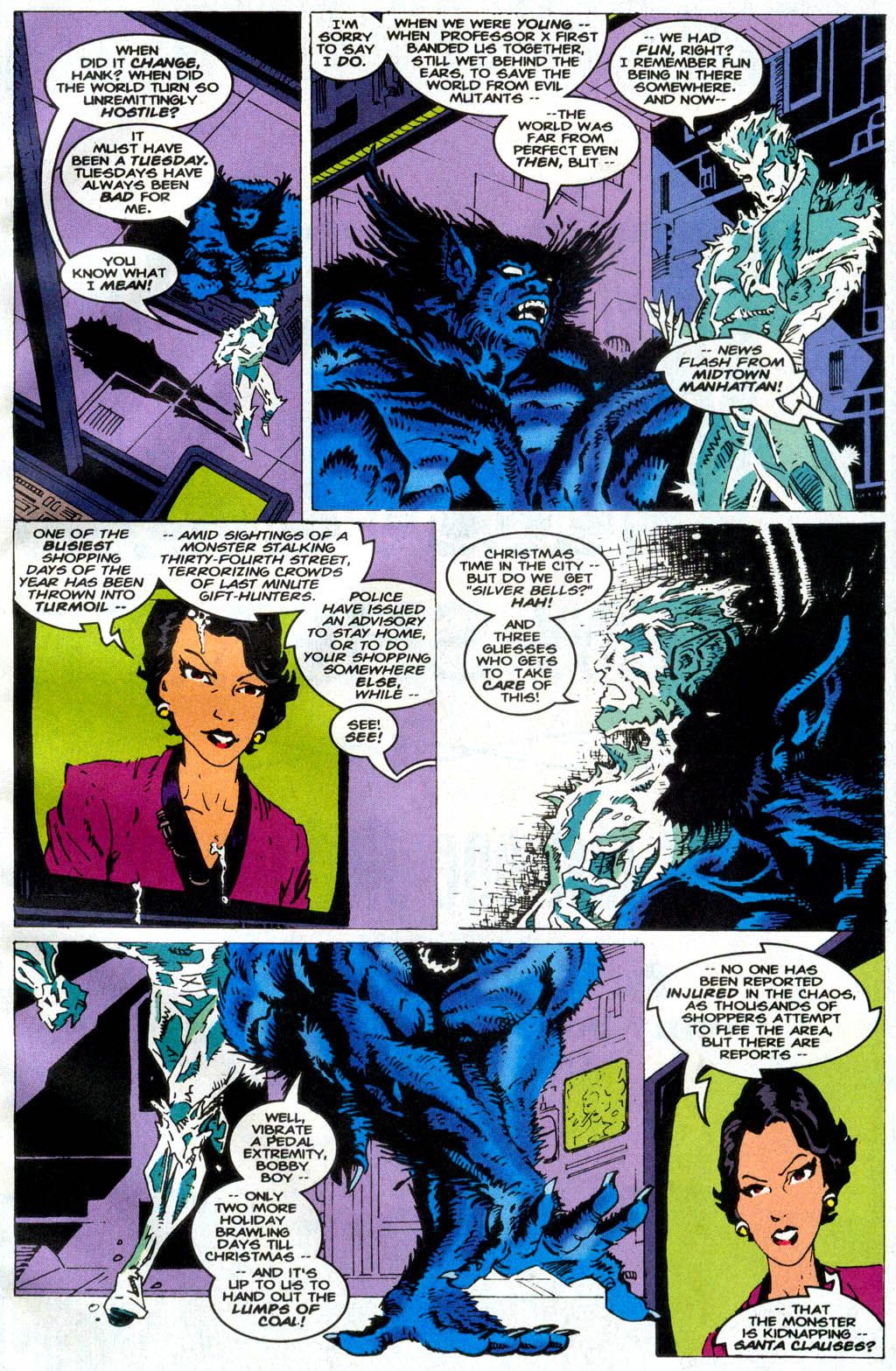 They save the Santas and defeat the lava monster, but the monster seems more SAD than anything else. It is then that they realize that they know who this lava monster is… 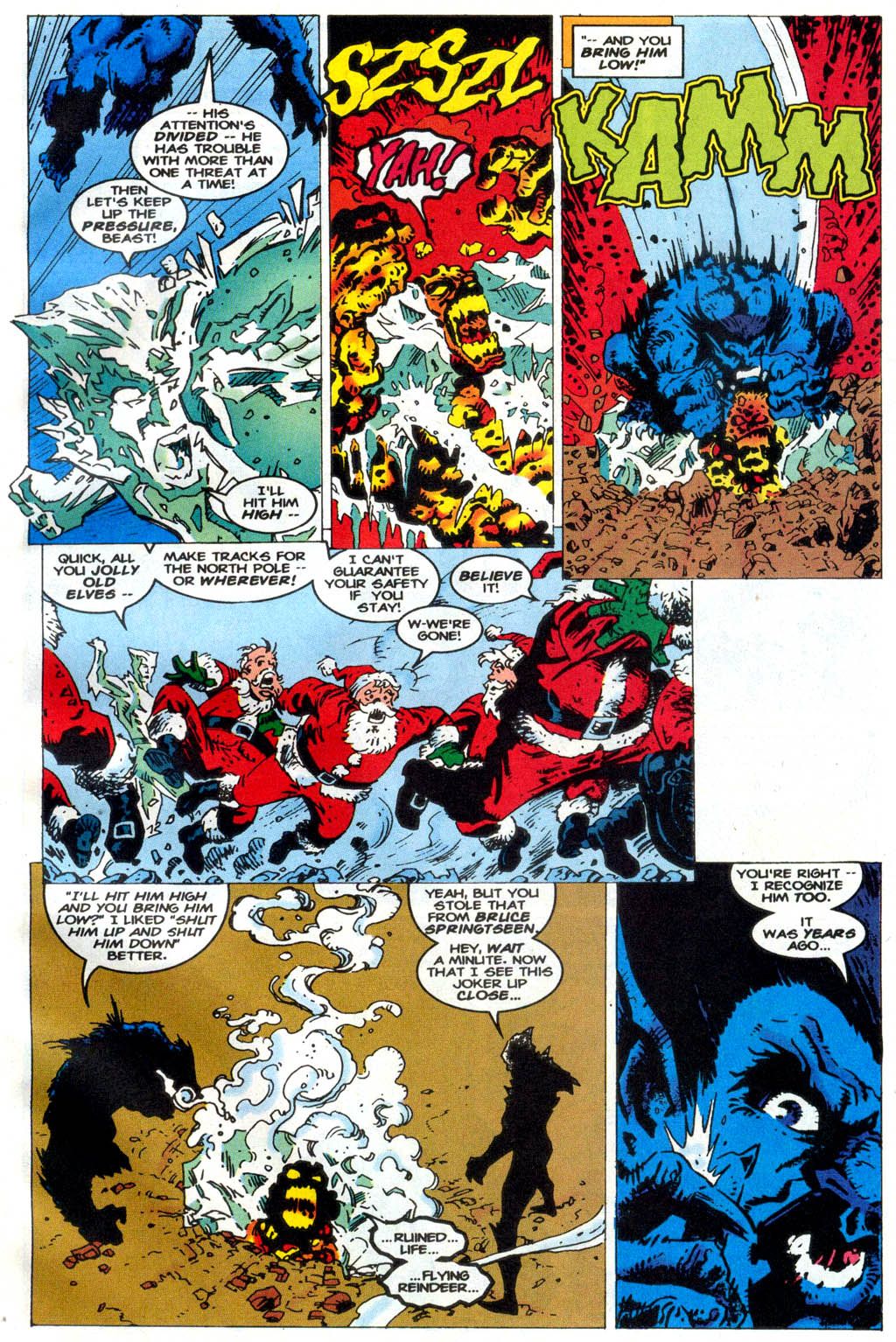 Now, you see, for a little while there in the late 1960s, Stan Lee came up with the idea of the X-Men splitting up and then the title would change every issue to spotlight whichever members of the team who appeared in that given issue. It would be a novelty to have the title of the series change from issue to issue. It did not work at all, sales-wise, so they dropped the idea right in the middle of it, to the point where a Beast and Iceman story was promoted that never actually came out, which was to show Beast and Iceman fighting against Metoxo, the Lava Man!

We then get a flashback, as Busiek, Fry and Vokes (with Fry and Vokes beautifully altering their art style to imitate Don Heck and Werner Roth’s art style, who were the guys who drew those solo stories) essentially tell us the Metoxo story that we never got in the first place!! 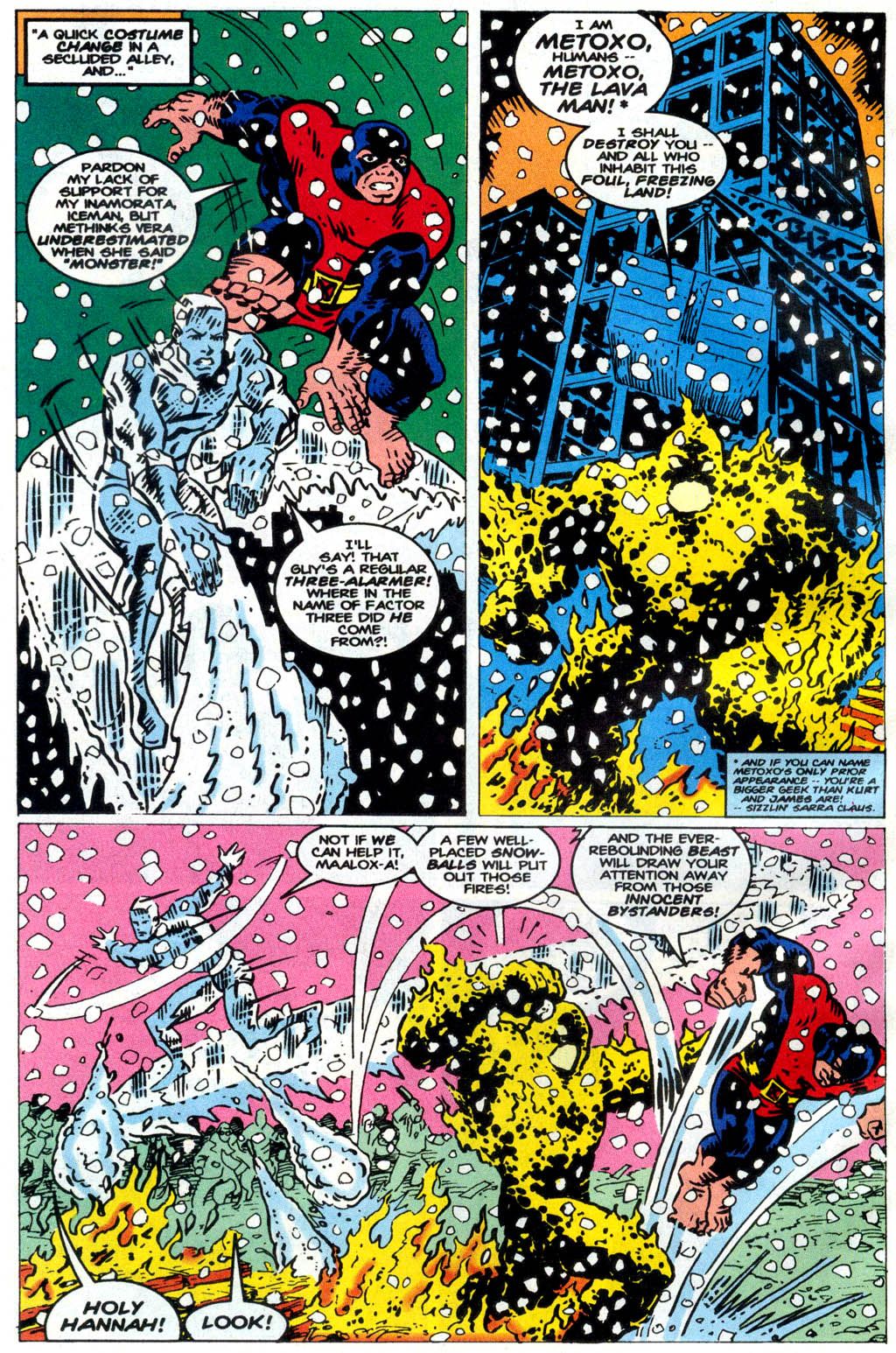 As it turned out, Metoxo just needed to be shown the true meaning of Christmas. So the heroes did so and the day was saved… 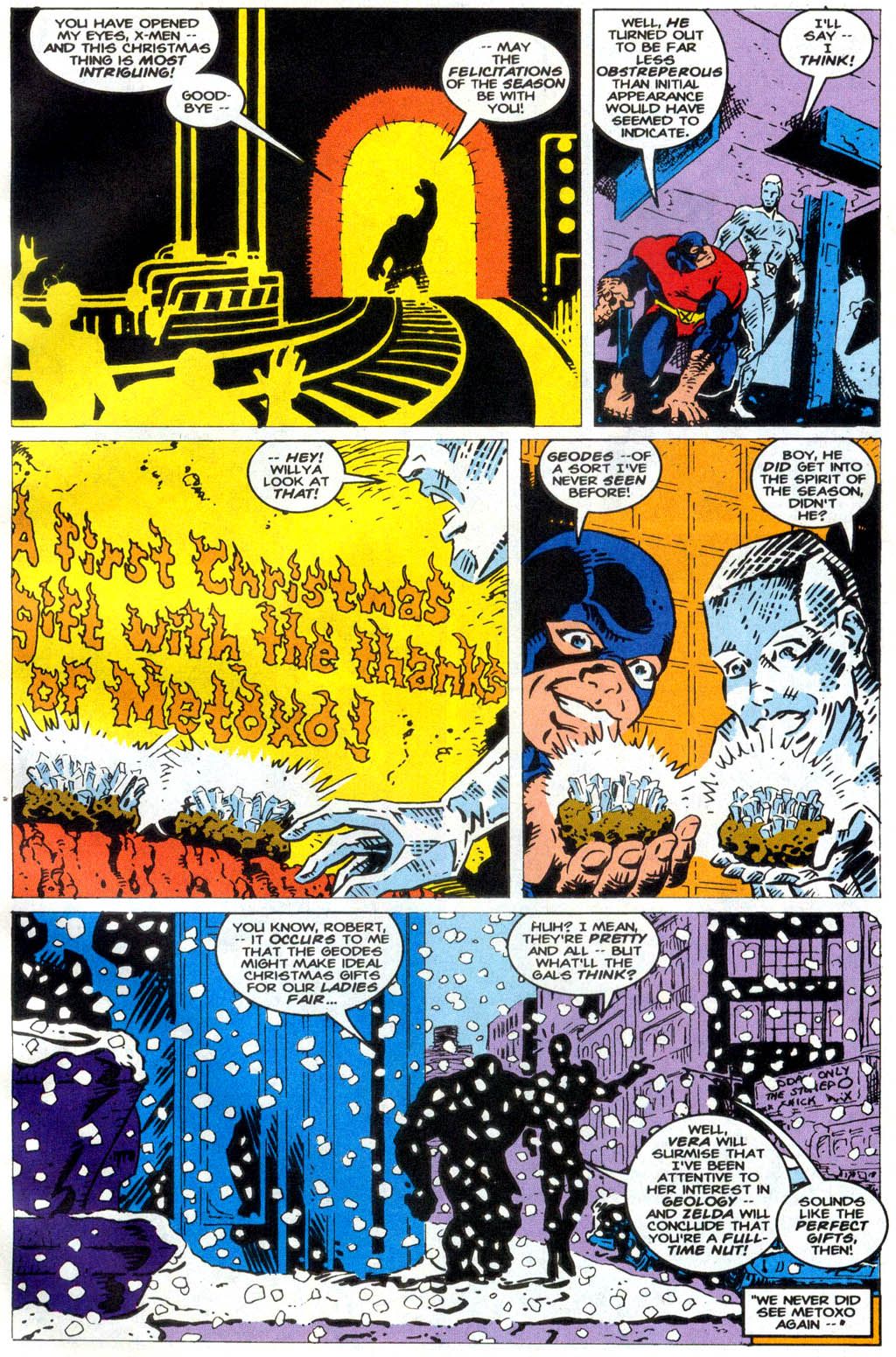 However, in a brilliant twist by Busiek. It’s now years later and Metoxo has kids and his kids don’t believe in Christmas (or at least the version of Christmas that survived in his mangled interpretation of what he saw years earlier). So that’s why he attacked the outside world, he wanted to bring Santa Claus to prove to his children that Christmas existed!

Beast and Iceman fill in instead…. 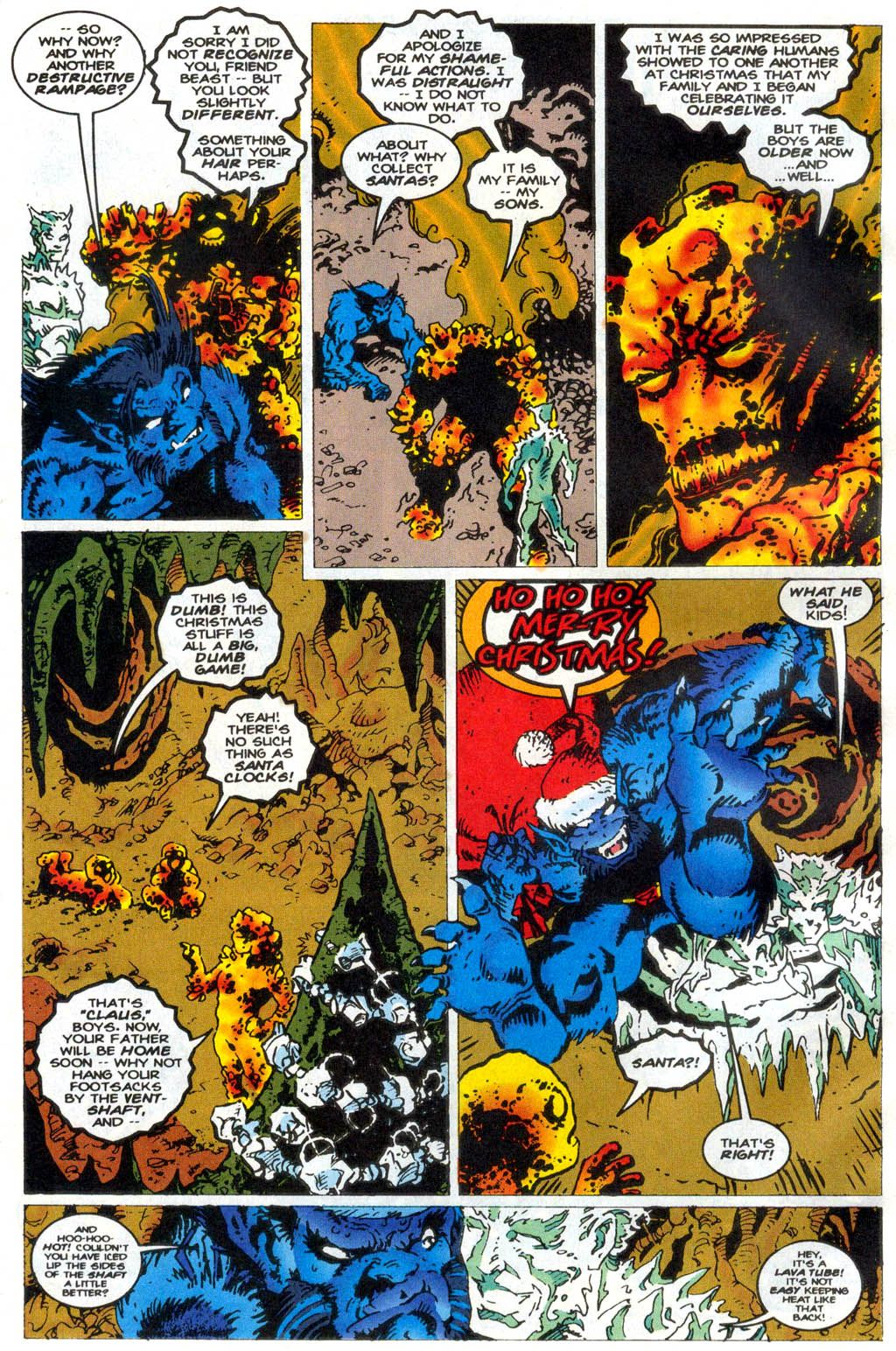 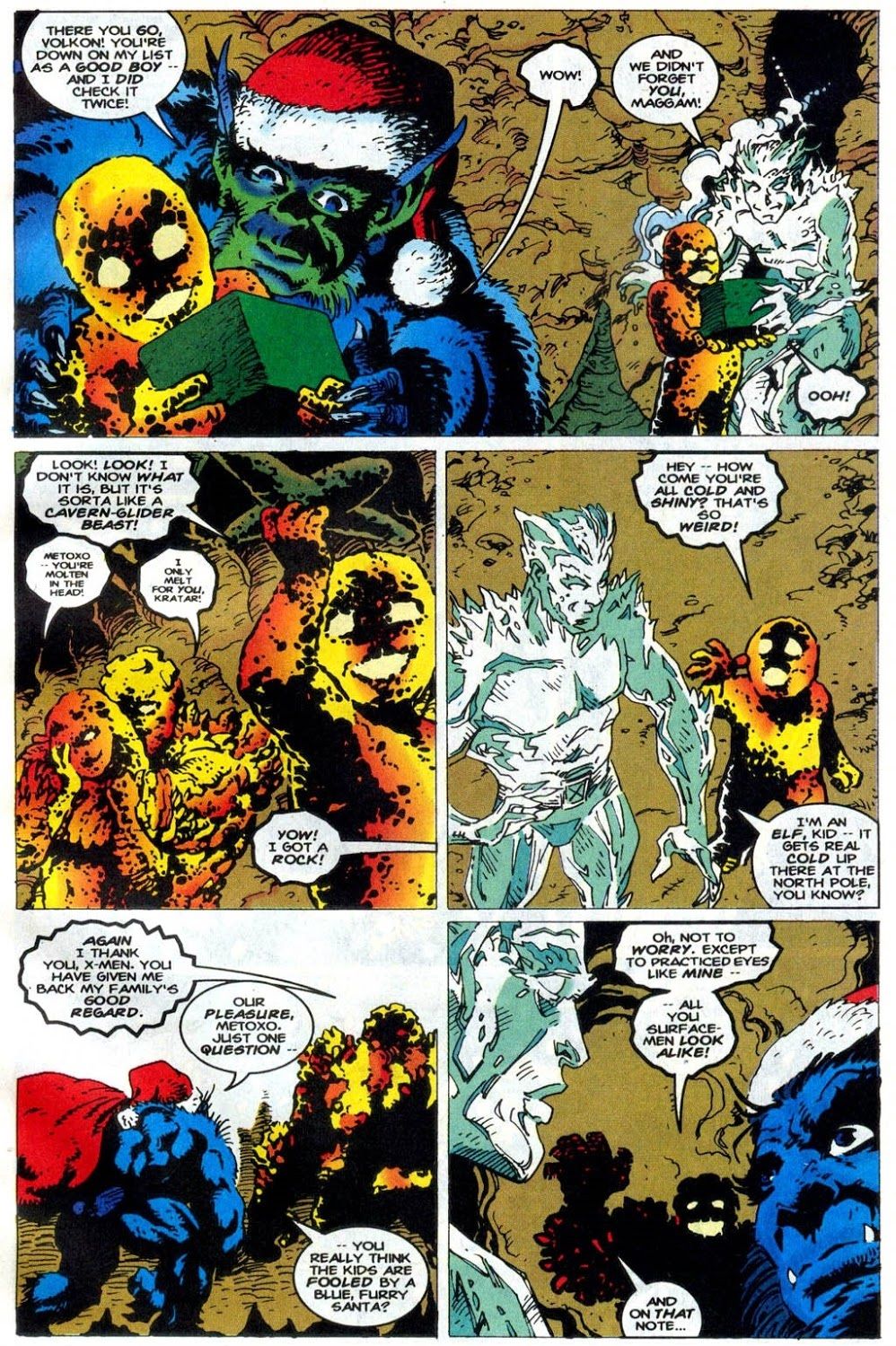 At the end of the story, Iceman reveals that he secretly recorded the cheez-ball Christmas Special and so he and Beast go back home to bask in their own peculiar holiday tradition! Very fun stuff.