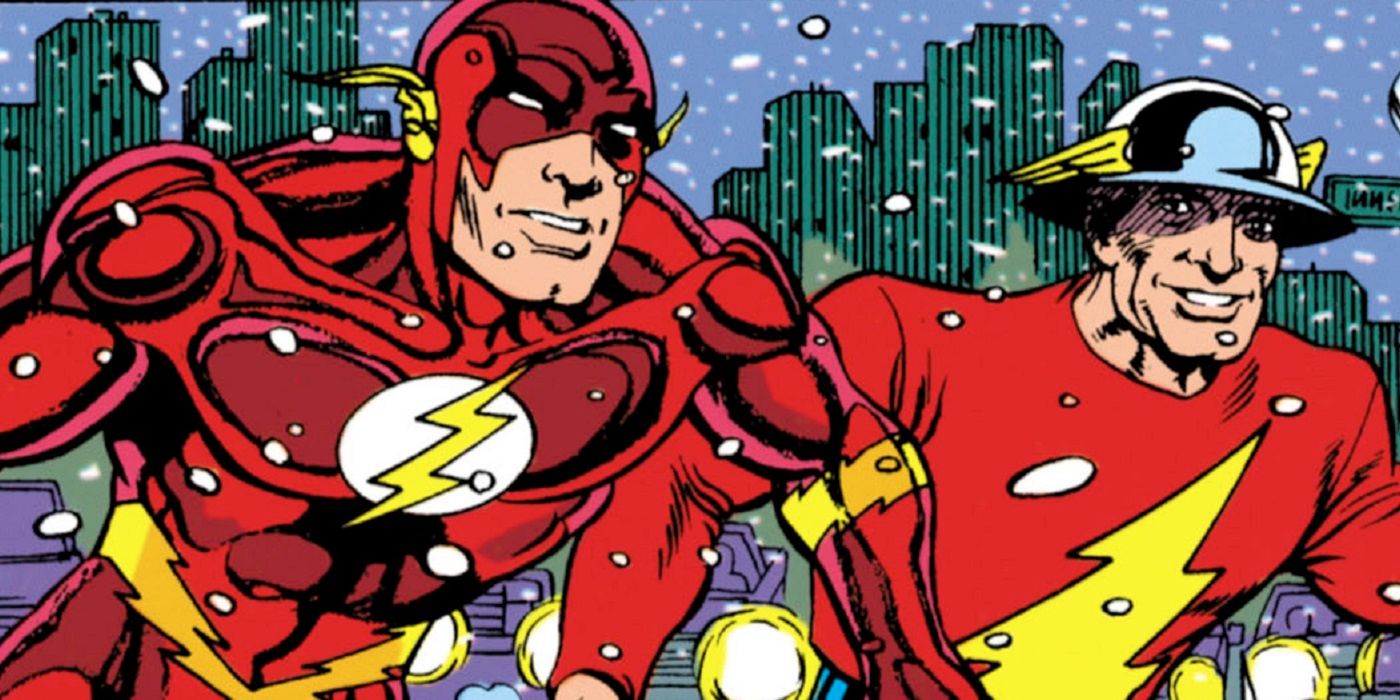 Today, we look at the 1992 Flash Christmas comic book where Wally West is shocked by the greatest Christmas present imaginable…the return of Barry Allen!

For the first day, I’ll show you the image itself… 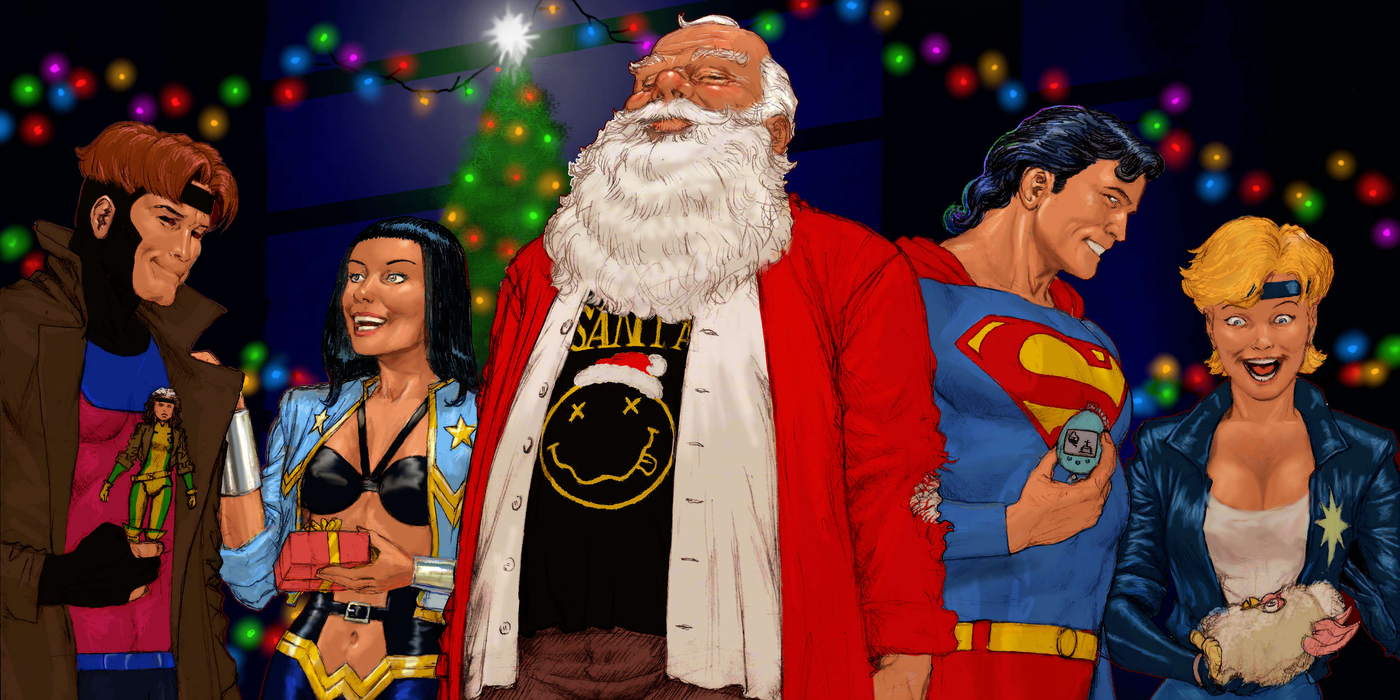 The drawing for this year’s Advent Calendar, of Grunge Santa Claus giving out 90s present, like a Tamagotchi, while posing with four superheroes with the most-90s costumes around, is by Nick Perks.

Here it is in calendar form… 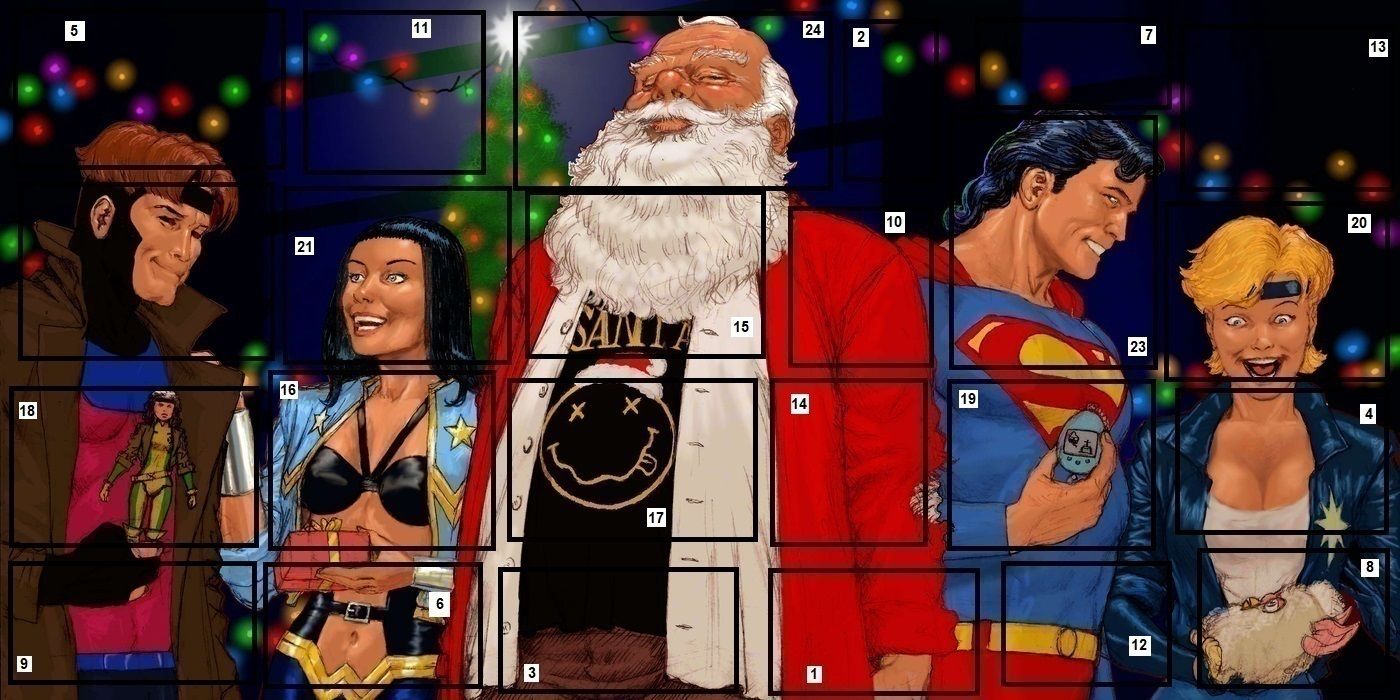 And now, Day 1 will be opened (once opened, the door will feature a panel from the featured story)… 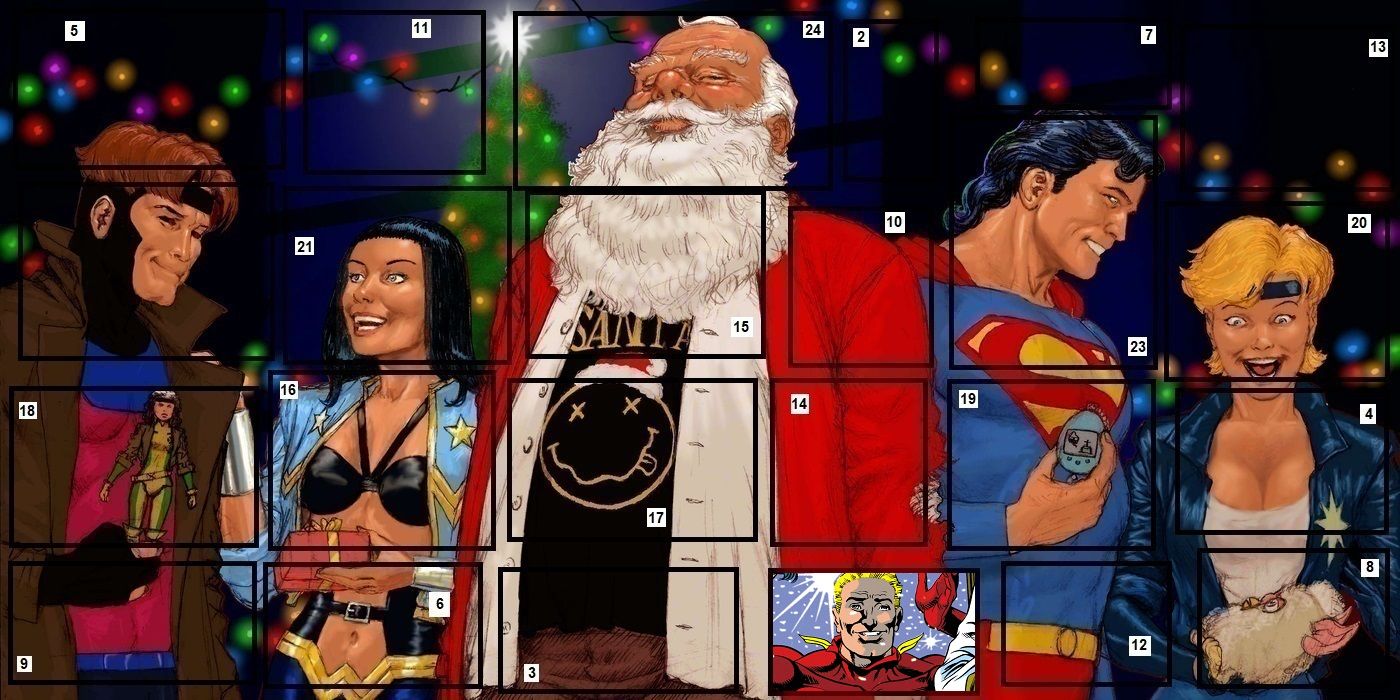 There are a number of fascinating aspects of this story that standout when you look back upon it, but I want to highlight two of them right off of the bat. There are a number of ideas in comic book history that are so on point and perfect that they just feel like they were always that way. Just to name a handful of these ideas, I would say the whole Daredevil being trained by Stick thing, Alfred Pennyworth being the sort of wisecracking medic for Batman, Mary Jane Watson knowing Peter Parker’s secret identity, Foggy Nelson knowing Daredevil’s secret identity and Professor Xavier being publicly acknowledged as a mutant are all things that seem like they just make perfect sense and yet took decades (MANY decades in a few of those instances) before they were actually part of comic book canon.

Similarly, it might shock you to read Flash #73 and realize that A. Linda Park and Wally West started dating literally the issue RIGHT BEFORE THIS ONE and B. Jay Garrick and Wally West barely interacted with each other before this issue. In fact, this was literally the FIRST ISSUE of this volume of Flash that Jay Garrick in which Jay Garrick even made an appearance! You see, DC had decided to write the Justice Society of America out of things for a while and they had only returned to the DC Universe proper the year before, so Jay was pretty much in literal comic book limbo for Wally’s series up until this point (Jay’s wife, Joan, appeared more often than Jay!).

This is shocking, of course, because Wally’s relationship with Linda and his relationship with Jay are both SPARKLING in this issue. In the case of Linda, that is because William Messner-Loebs did a wonderful job developing Linda Park as a supporting cast member during his time on the series, so the move from friends to boyfriend/girlfriend was very natural. In the case of Jay, that’s just all Waid. It is amazing ho well he made them synch together.

Waid had now been on the series for about a year (or at least a year’s worth of stories) and he was clearly VERY comfortable with Wally now and thus, that allowed him to challenge Wally as a character. Waid was not afraid to make Wally come off as kind of annoying sometimes because he had the confidence that he had made us care enough about Wally to look past stuff like that, while also establishing the sort of grandson/grandfather relationship between Wally and Jay… 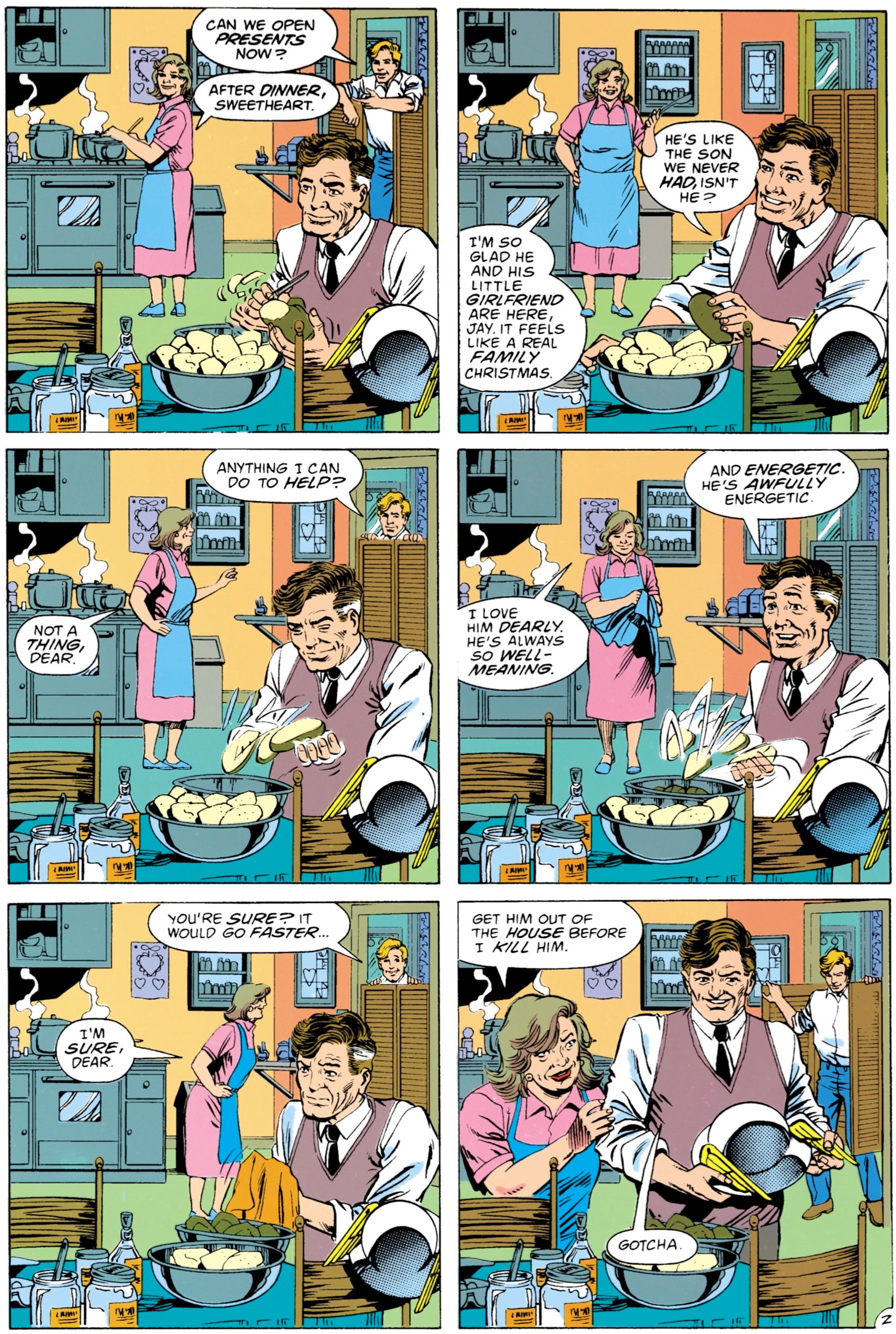 Waid has Wally addressing some very relatable ideas about how when you grow up, Christmas presents sometimes lose the same thrill that they had when you were a little kid, when just getting a mitt or something like that could really blow your mind…. 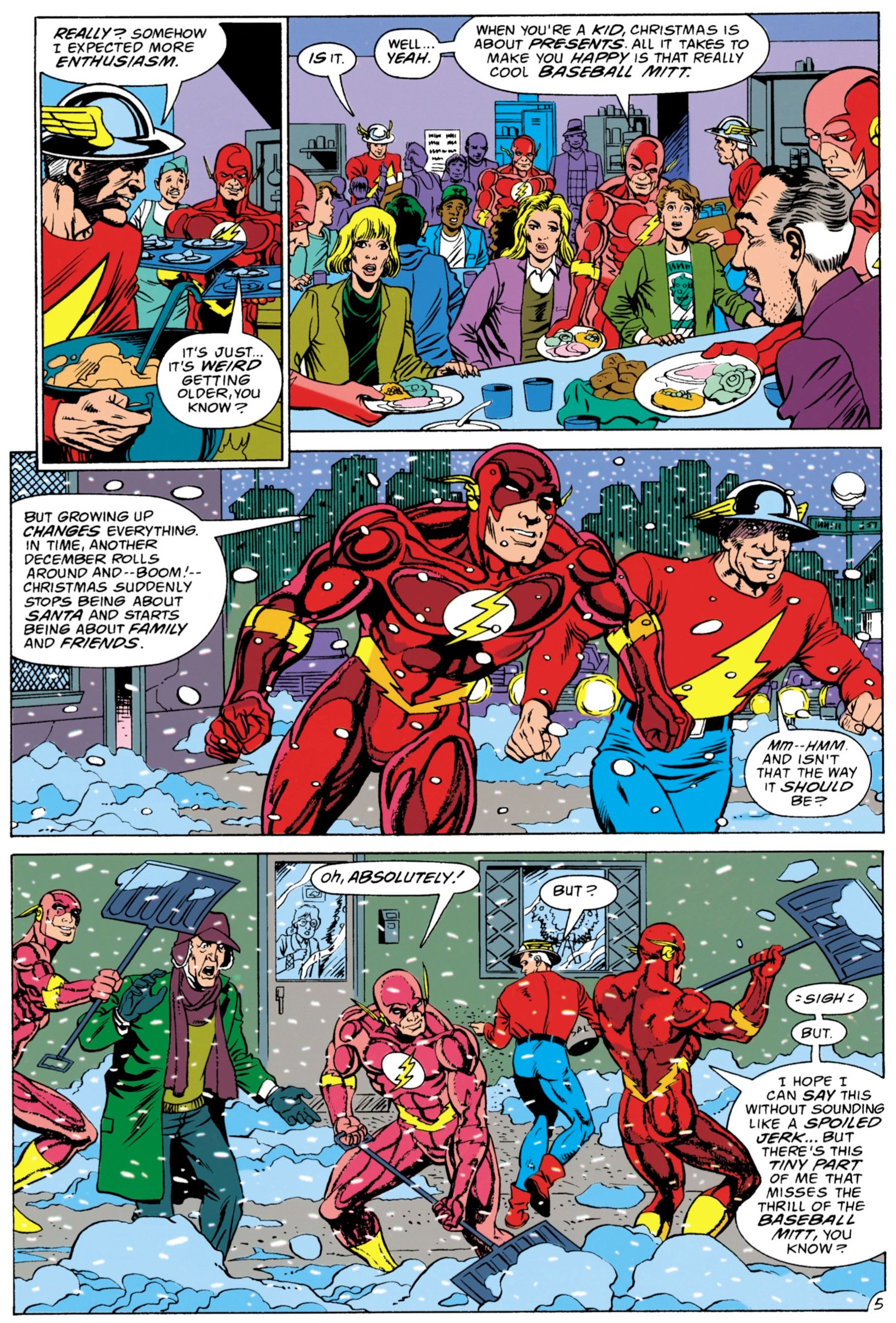 It is amazing just how impressively character-driven pretty much the entire Flash run was, between Mike Baron, William Messner-Loebs, Mark Waid and Geoff Johns. By the way, when you’re reading Greg LaoRocque’s Flash run (he was on the book for quite a long time), a fun little game is to see how he finds ways to sneak cheesecake into stories that logically would not include cheesecake. Like, well, sexy mannequins…. 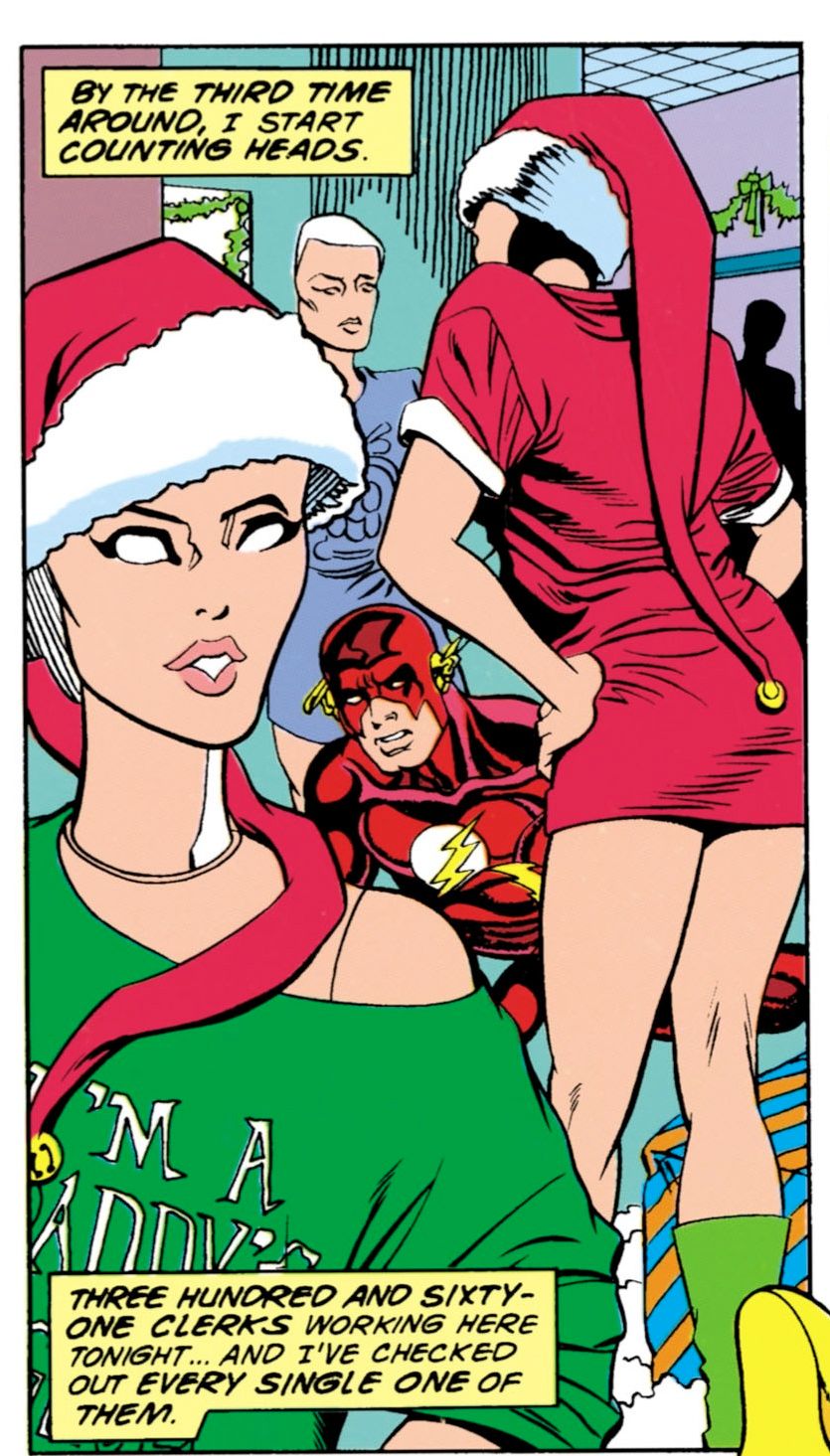 Waid dedicated this issue to Denny O’Neil, and that’s a perfect reference, because Waid leaned HEAVILY into a number of Denny O’Neil Christmas classics for this issue. Jay and Wally come across a pregnant young woman whose husband is a part-time worker at a local department store and he is so desperate for money to help with their new baby that he has agreed to help rob the store. Jay deals with the woman, bringing doctors to her at super speed (rather than try to move her while she is in labor) and Wally’s job is to find the husband at the department store that is packed on Christmas Eve (back in the olden days when people didn’t do all of their shopping online). The husband, of course, first shows his mettle by changing his mind (and almost being killed for it), but luckily the Flash saves his life (and the little boy that the husband had been willing to give up his own life to protect) and then gets to be reunited with his wife and their newborn child (and there’s a Christmas star for good measure)… 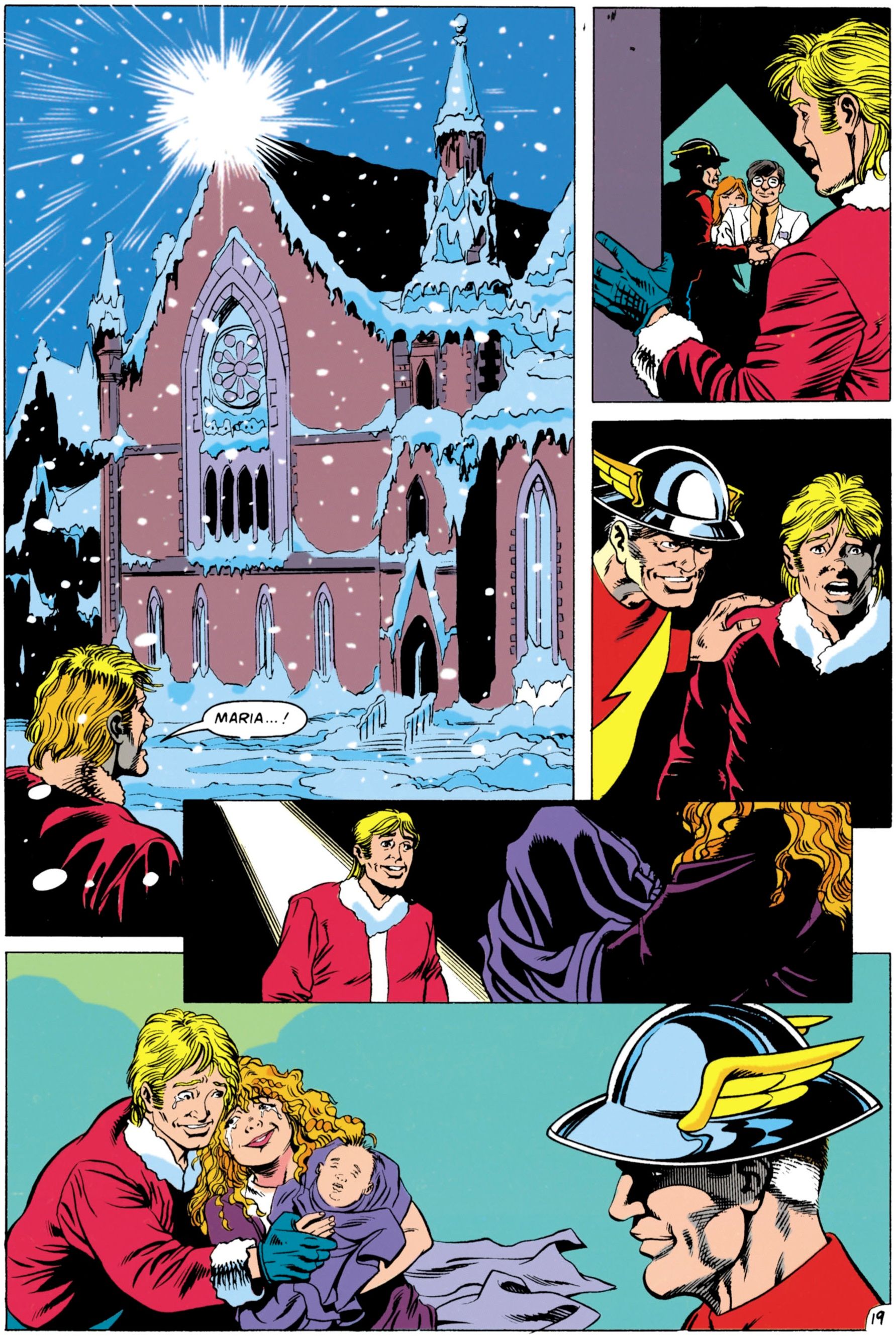 Then, when we see Wally, Linda, Joan and Jay open up their presents, Linda finds a way to surprise Wally by actually getting him…a mitt! 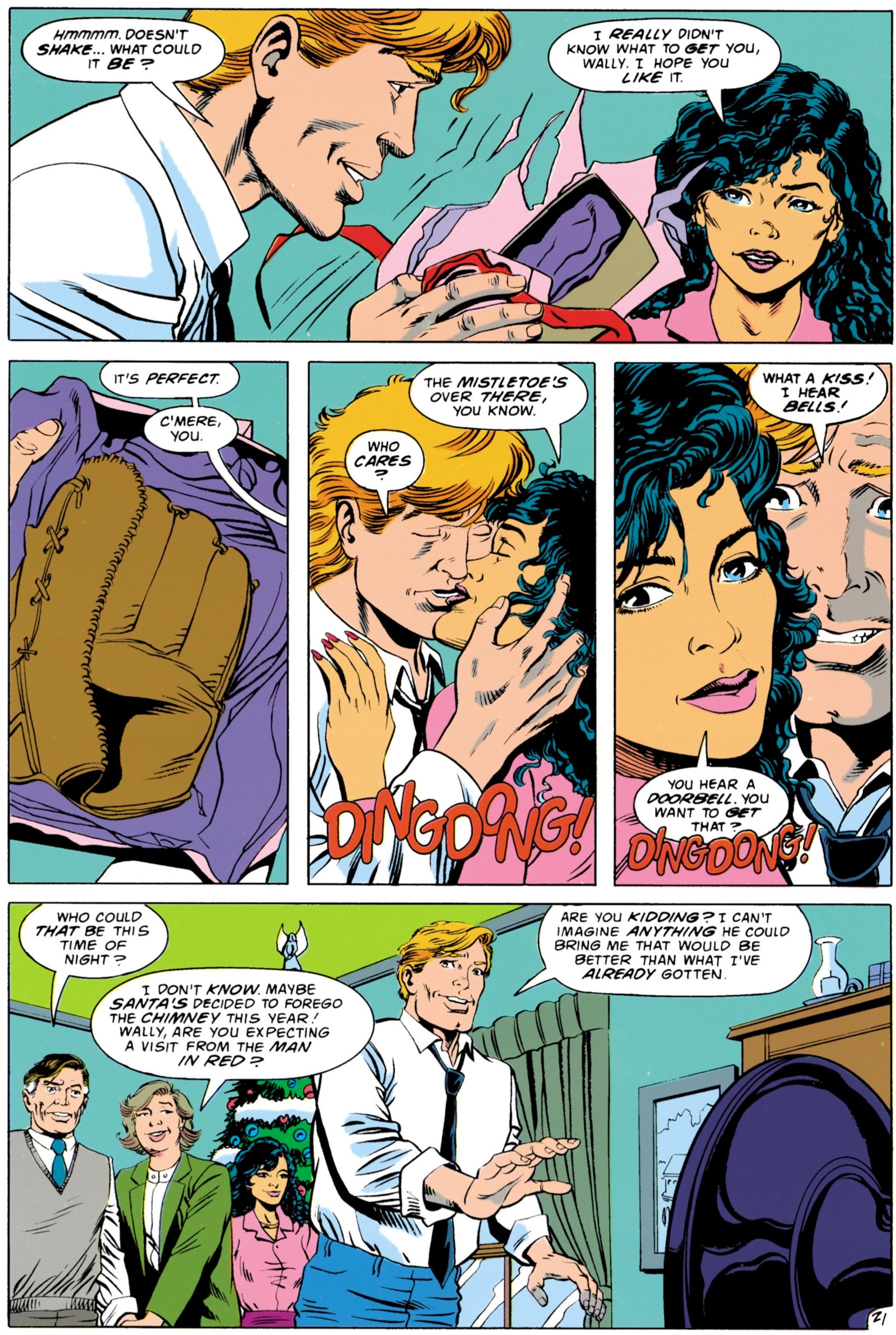 That’s some fine, fine writing there by Waid, bringing things back into a circle. Just excellent writing. But then, of course, the shocking coda of the issue. The doorbell rings, and Joan says some weird comment about a man in red (yes, it’s meant to be a Santa reference, but people don’t call Santa “A man in red” like that) and instead, it’s…BARRY ALLEN!?!? 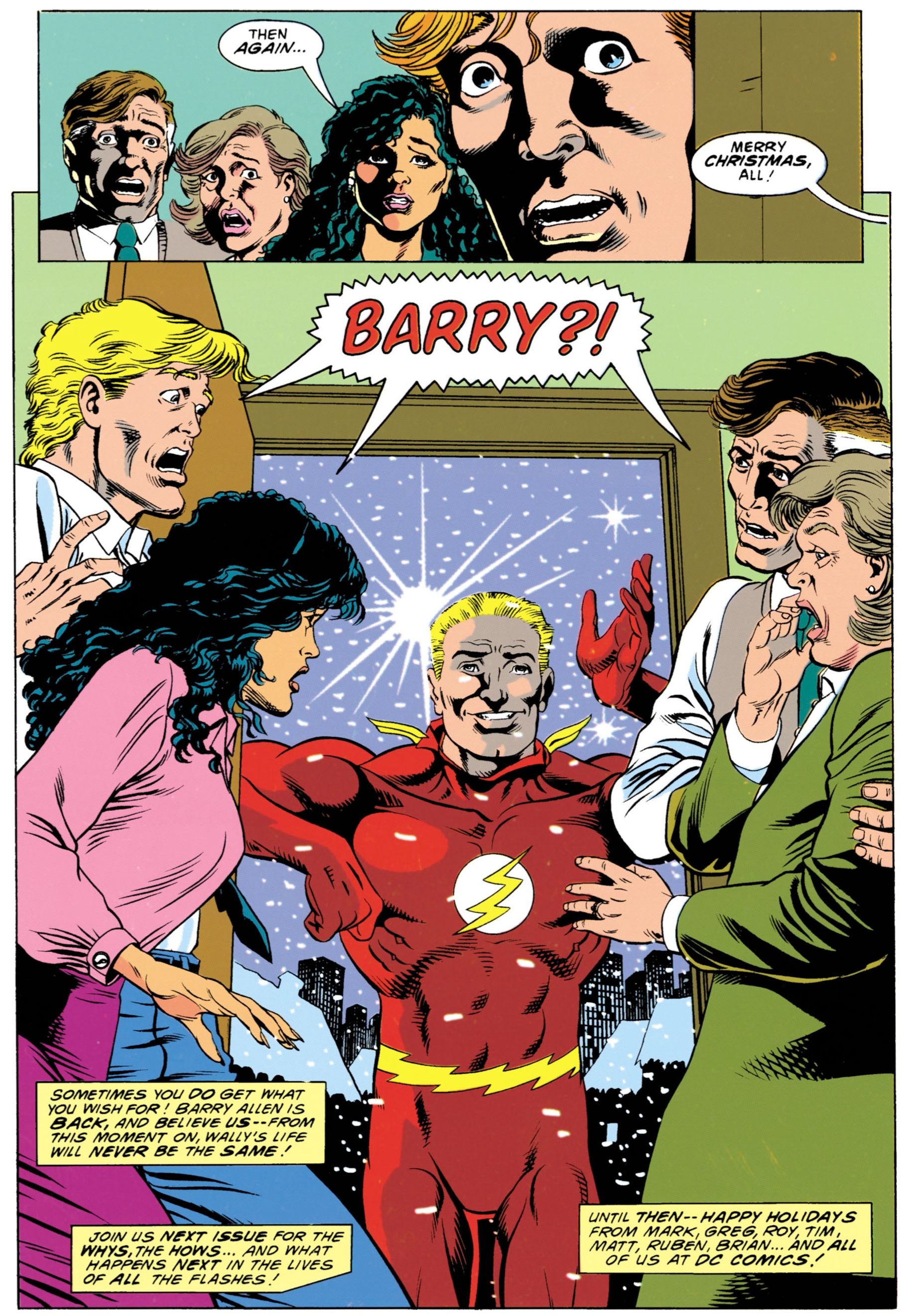 This, of course, sets up the “Return of Barry Allen” storyline that was so great that it recently finished #30 in our countdown of your picks for the greatest comic book storylines ever told!

OUTSIDE THE PANELS – TIM SEELEY