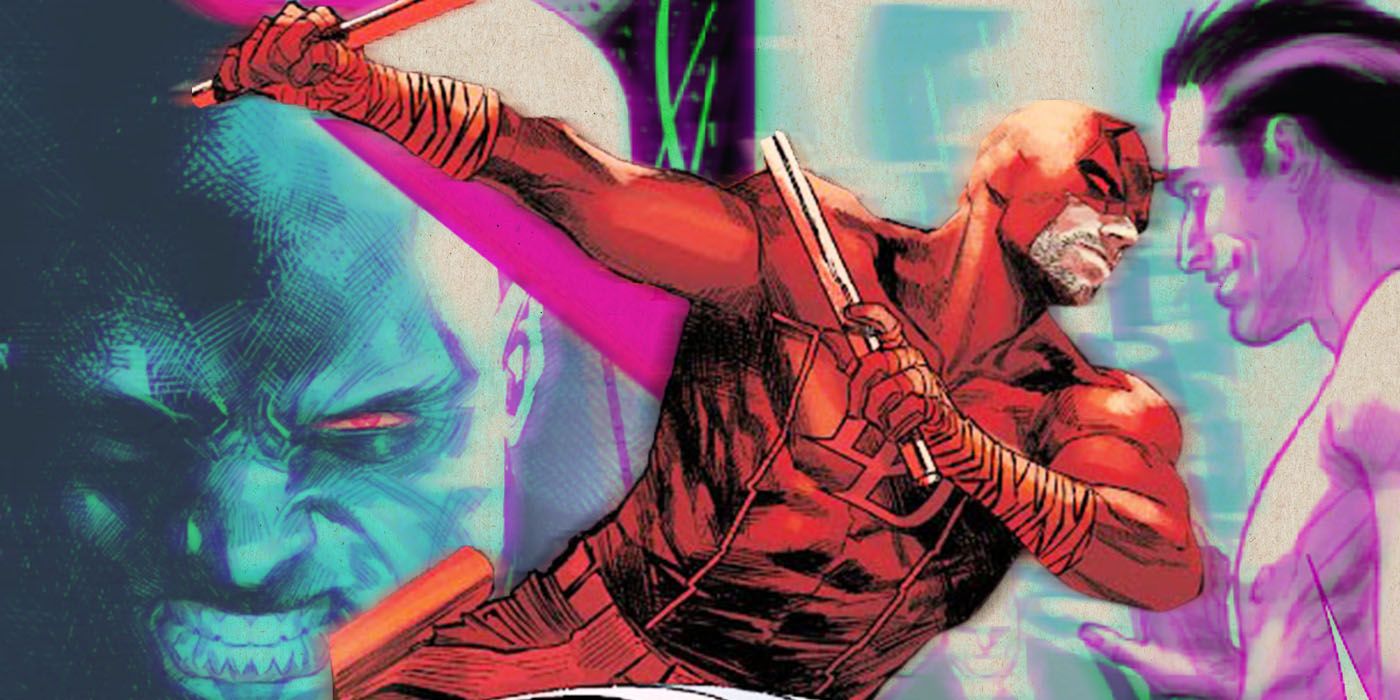 Wilson Fisk has been one of the most imposing figures in the Marvel Universe ever since his debut over fifty years ago, but his long standing rivalry with Daredevil has just brought out a whole new level of cruelty from the former Kingpin of Crime. In Devil’s Reign #1 (by Chip Zdarsky, Marco Checchetto, Marcio Menyz, and Clayton Cowles), Fisk has used his position as the mayor of New York to criminalize all of the superpowered heroes working within the city, while turning to his underworld empire to give himself a horrifying new upgrade. Now Wilson Fisk is poised to become an unstoppable threat, thanks to taking the power of the Purple Man for himself.

While Wilson Fisk has spent the past few months celebrating a series of major personal victories, his mood has been soured by his inability to recall Daredevil’s secret identity. After spending so much time and energy uncovering his adversary’s most coveted secret, Fisk has now lost it all. This slight is all it took to drive the Mayor of New York to use his political power to unleash a new anti-superhero police force on the city. The extent of his reach as mayor only extends so far, but Fisk has a solution to the problem that involves another villain, the Purple Man. 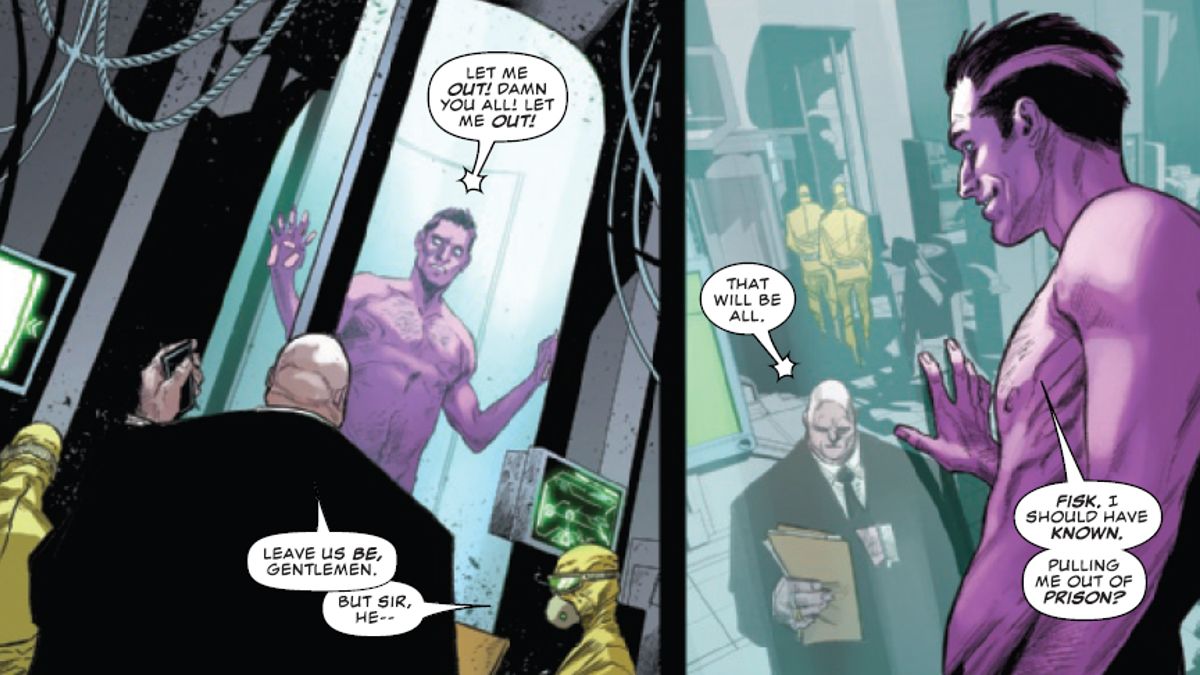 First introduced in 1964’s Daredevil #4 (by Stan Lee and Joe Orlando), Zebediah Kilgrave, aka the Purple Man, has been a lethal menace ever since he was first introduced, able to bend the will of those nearby through little more than an uttered phrase. In spite of the villain’s imprisonment, it was an easy task for Mayor Fisk to have Kilgrave moved to a more private location, where he could access his mind-controlling abilities and steal them for himself in the furthering of his nefarious goals. Even if it hasn’t been seen just yet how exactly Fisk plans to steal Kilgrave’s mind controlling pheromones, that hardly matters as much as the fact that he could achieve such a feat in the first place.

Between his still expansive underworld empire, his position as mayor of New York, and the Thunderbolt Units carrying out his personal war against superheroes, Wilson Fisk is still displeased with the limits of his power. He now seeks to harness the power of the Purple Man to secure his run for the highest office in the land, that of the President of the United States, and with the abilities of Kilgrave at his disposal there appears to be nothing stopping his aspirations from becoming reality. 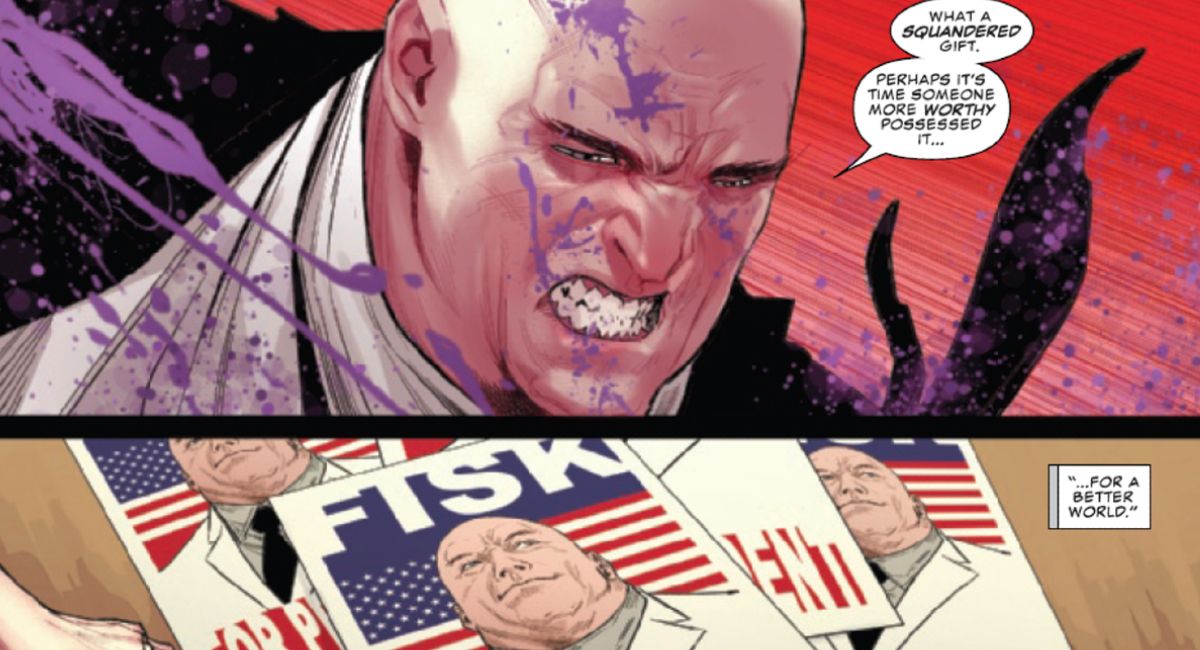 While Fisk’s latest play for power has not been shown to be successful as of yet, it hardly seems like he will have any trouble successfully fulfilling his endeavors now that he can break people’s wills as easily as he does their bones.

It is also possible that he could use the Purple Man’s powers to further legitimize his own image despite any ill-gotten praise. If that happens, it likely won’t matter how many enemies Fisk has, especially if he has the backing of the rest of the country.

OUTSIDE THE PANELS – JON LOCK