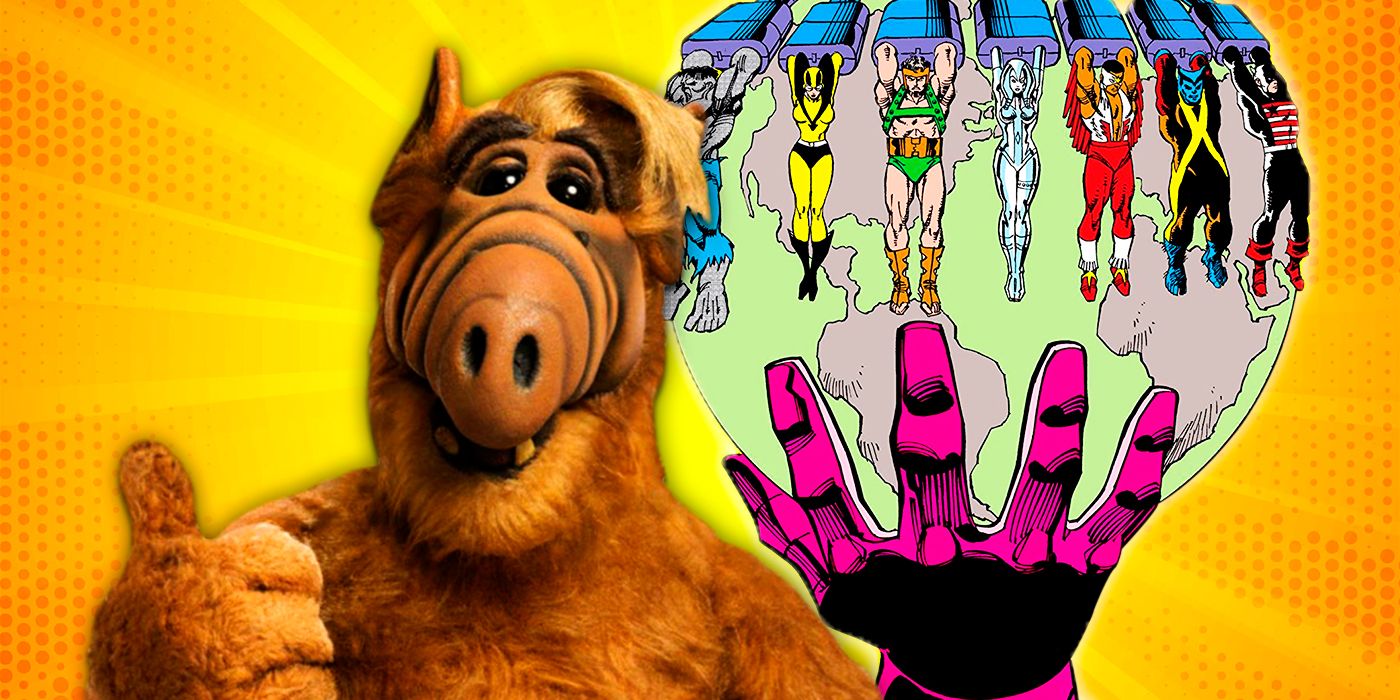 Today, we look at how one of Marvel’s sweeping Summer Annual crossover events somehow also involved…ALF?!

This is “Can’t Cross Over,” a feature where I look at instances when comic book writers had to adjust their stories to deal with crossovers.

Comic book crossovers have obviously been a part of the comic book industry since the Golden Age, when MLJ’s Shield and Wizard first had a crossover between their respective comic book titles, but the ubiquity of crossovers didn’t really become a thing until the mid-1980s, when suddenly the advent of trade dress denoting that a comic book was a tie-in to a major crossover became a big part of the industry, with both DC’s Crisis on Infinite Earths (which was an unusual example where every DC title was forced to nominally tie-in to the then-new event, even if it was just as simple as the Monitor making a cameo or the skies turning red in the background, but after the sales figures came in on the crossover, then suddenly every title was going out of its way to tie into Crisis) and Secret Wars II, with its corner box logo (that was so familiar to the logo for Nabisco that fans came to refer to the Secret Wars II tie-ins as the Nabisco tie-ins), taking control of so much of the comic book released on the market.

Once those were out of the way and the dam had burst, as it were, sweeping companywide crossovers soon became a standard thing in comics, although Marvel initially tried to limit the idea to its annuals, with the 1988 crossover, Evolutionary War, getting so crazy that it even involved the ALF Annual!

RELATED: How Superman’s Killer Doomsday Was Recruited by the Suicide Squad

ALF was a sitcom that aired on NBC from the Fall of 1986 until the Spring of 1990, about an alien (named Gordon Shumway) who crash landed on Earth after his home planet of Melmac was destroyed and was taken in by an otherwise typical suburban family, who hid ALF in their home to prevent him being captured by the government and experimented on. The name, ALF, stands for “Alien Life Form.” ALF was a puppet who was voiced and operated by Paul Fusco, who was also the creator of the series (I recently did a bit examining how many sitcom cliches ALF hit during its run). 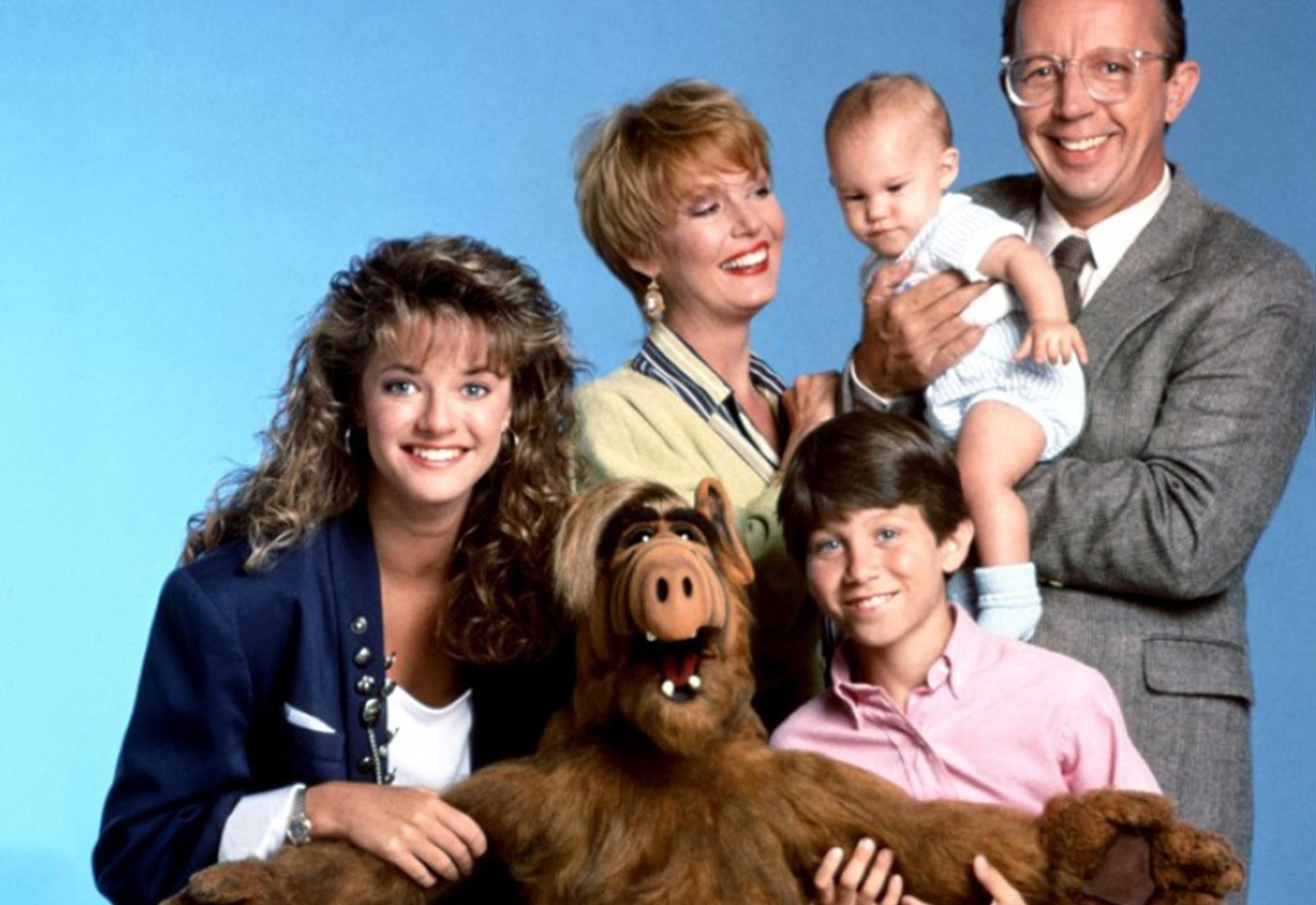 ALF was so popular that NBC then launched an ALF cartoon in 1987, showing Gordon’s adventures before he crash landed on Earth… 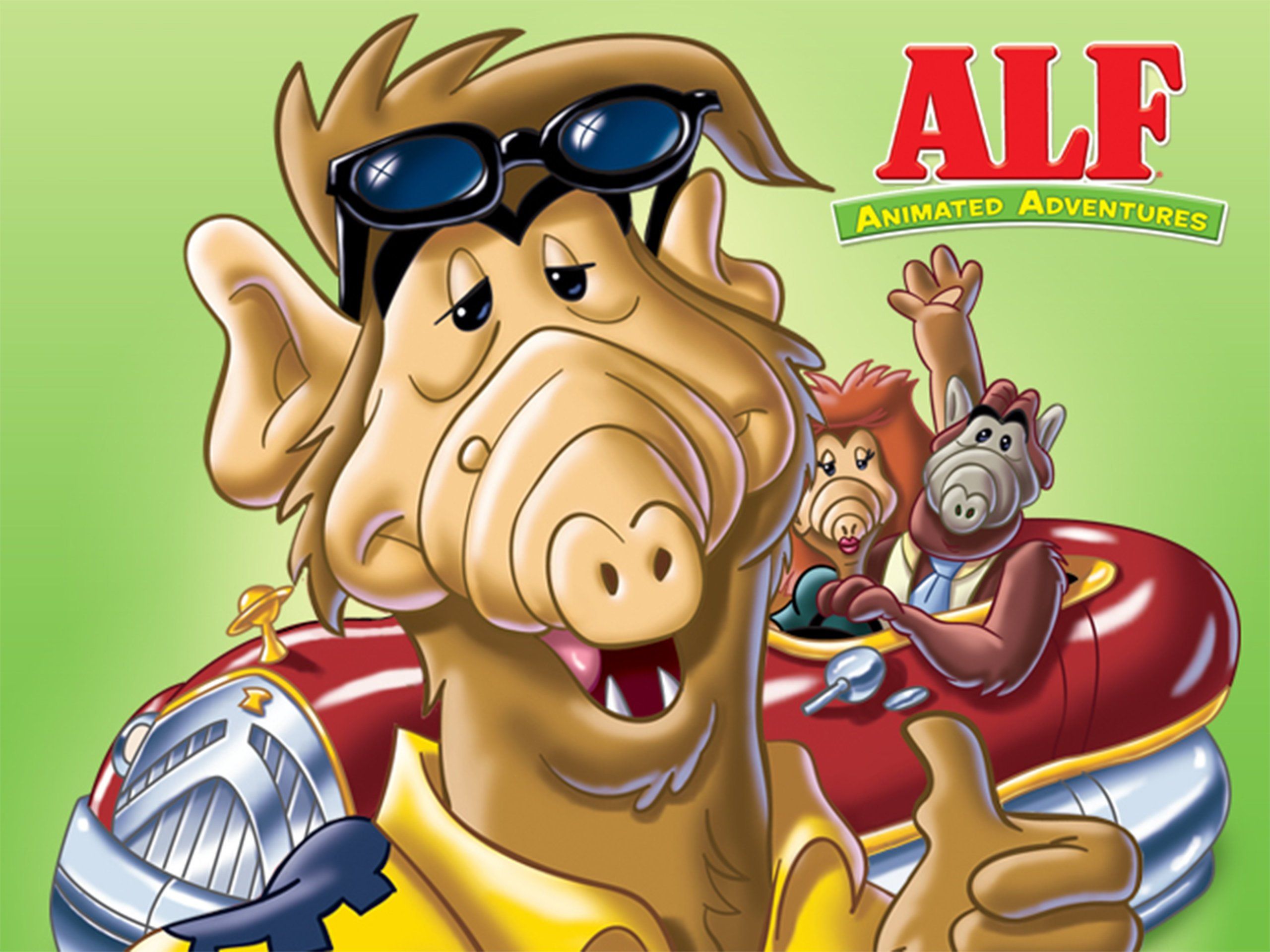 THAT cartoon was so popular that he even had a SPINOFF cartoon (which obviously was extremely rare) called ALF Tales, where Gordon would star in stories based on famous fables and the like… 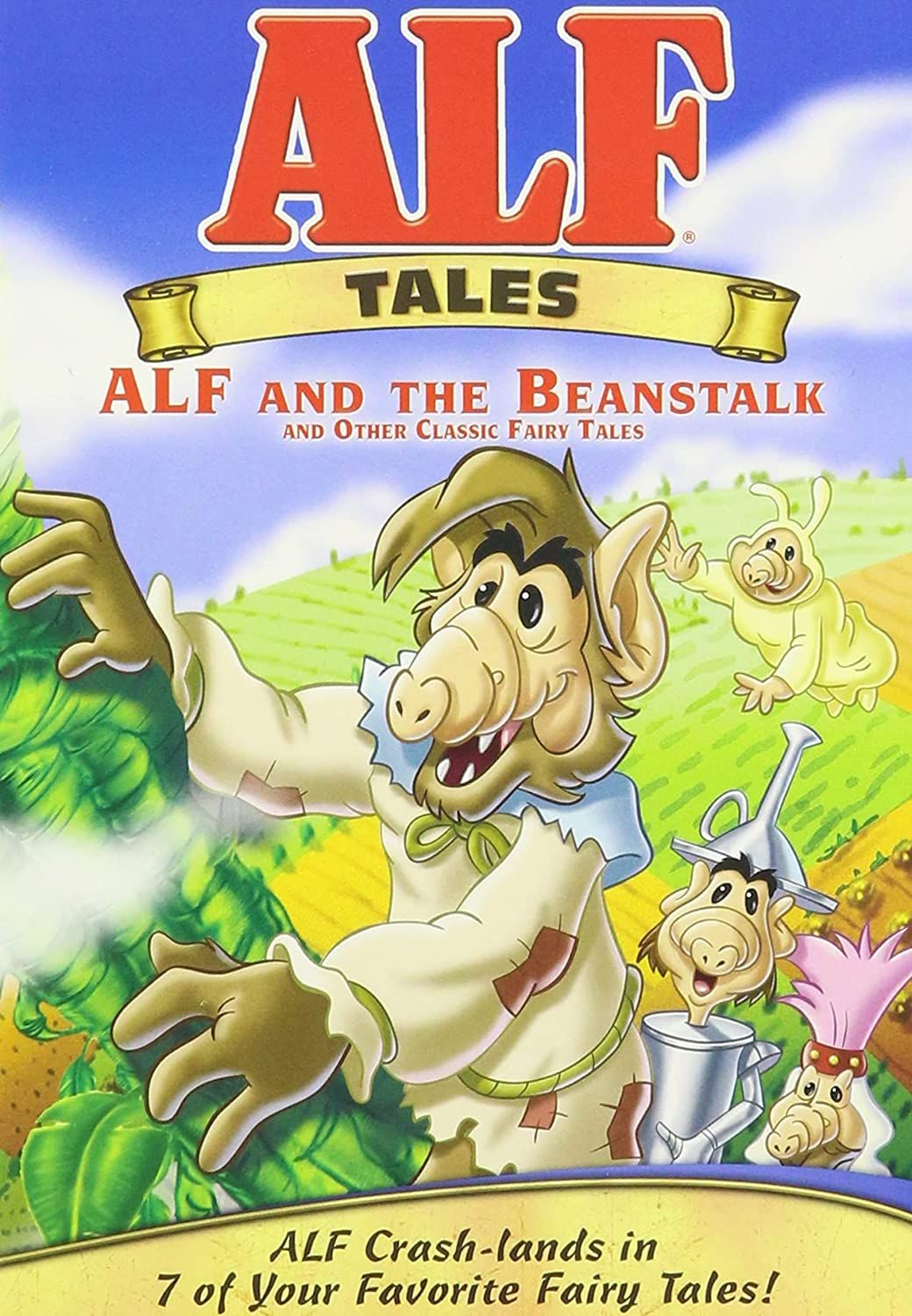 And, of course, ALF was so popular that he then even received his own Marvel comic book in 1988 (as per comic book tradition, there wasn’t a comic book until the fad had almost run out)… 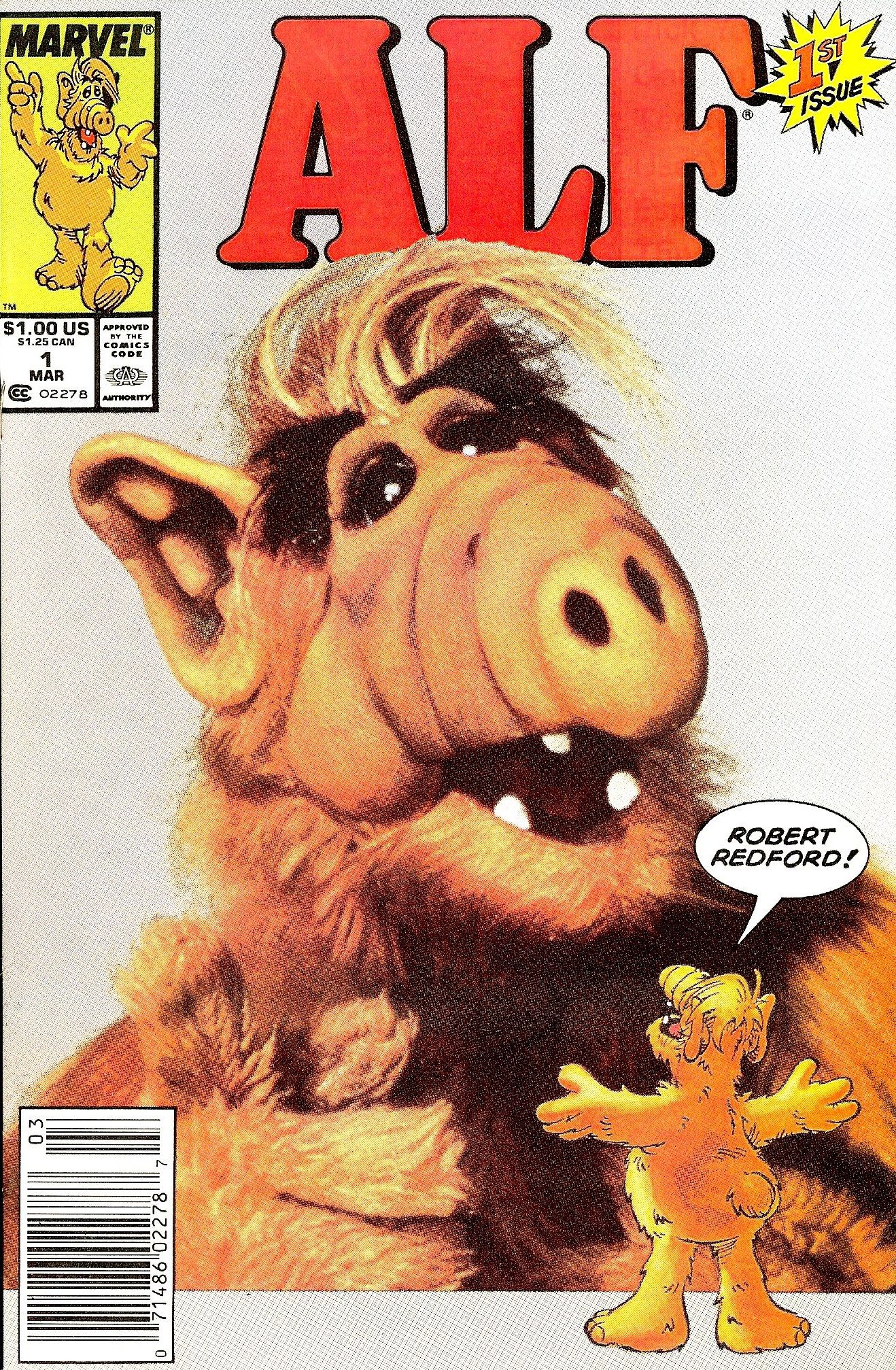 Written by Michael Gallagher and drawn by Dave Manak and Marie Severin, the comic book was a surprise hit, running for 50 issues, thus lasting a couple of years longer than the TV show that it was based upon!

It was a crossover where the longstanding Marvel villain/supporting character, the High Evolutionary, decided he was going to “evolve” humanity, whether it wanted to or not!

The High Evolutionary was a famous geneticist who became so fascinated with evolution that he literally created his own planet with mutated animals on it called Counter-Earth. However, what he felt was his crowning achievement was seen as just a cosmic curiosity by the cosmic beings out there like the Beyonders. So the High Evolutionary went mad and tried to kill himself. He seemingly survived, but turned up again during the Evolutionary War crossover re-dedicated to his purpose, to evolve humanity to the point where it was more powerful than even the Beyonders!

His plans were widespread (so that it could make sense with a number of disparate Marvel titles, like there was a drug war element that let the Punisher get involved and there was a plot where the Evolutionary’s minions were trying to rob mutants of their powers to get the X-Books to tie in), and all of the titles appeared with the notable Evolutionary War trade dress on their covers… 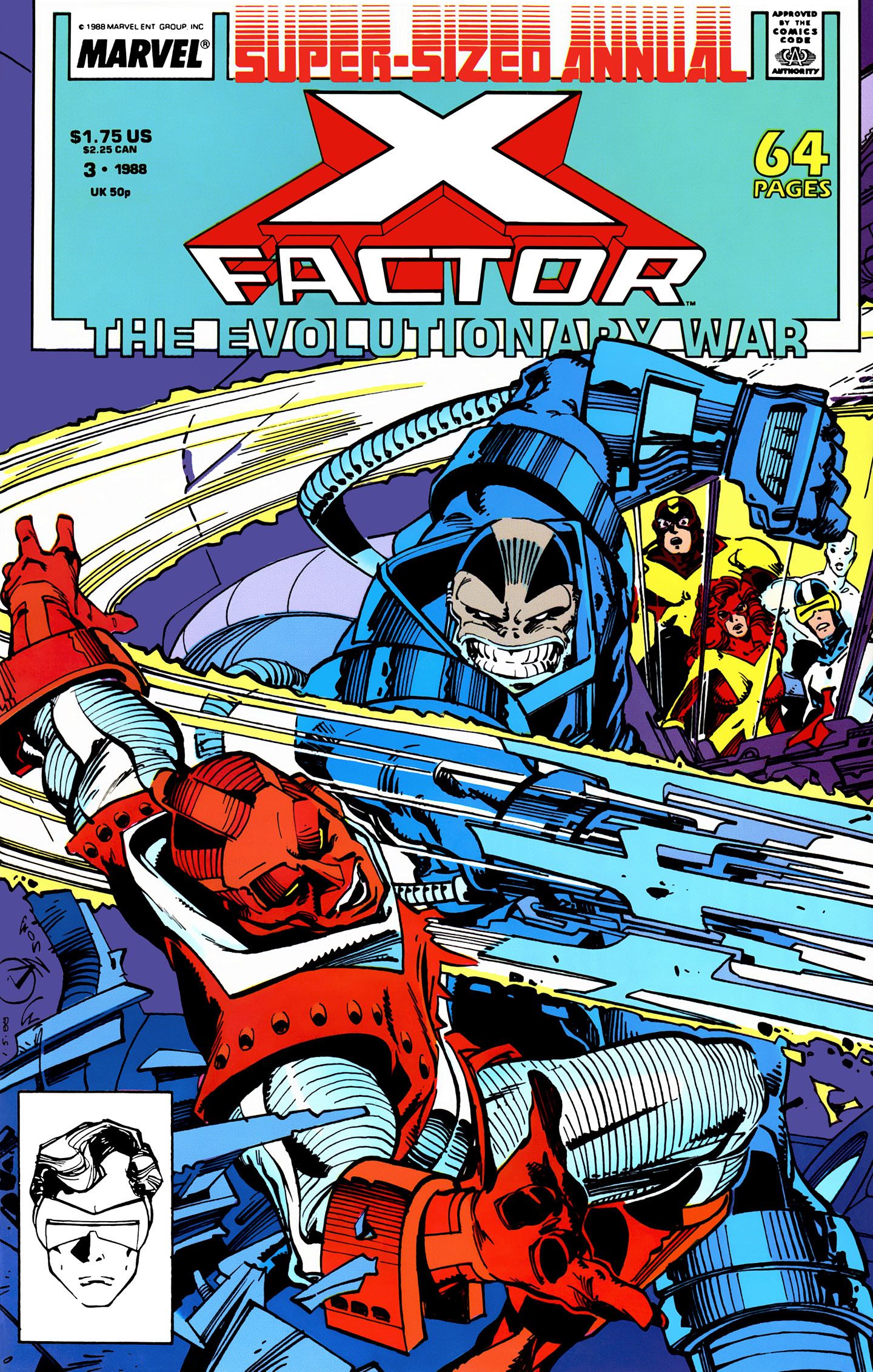 RELATED: Black Adam: How the Next DCEU Star Led the Suicide Squad Into a DC God War

Well, in 1988, ALF received his first comic book annual, and sure enough, it had the Evolutionary War trade dress on it! 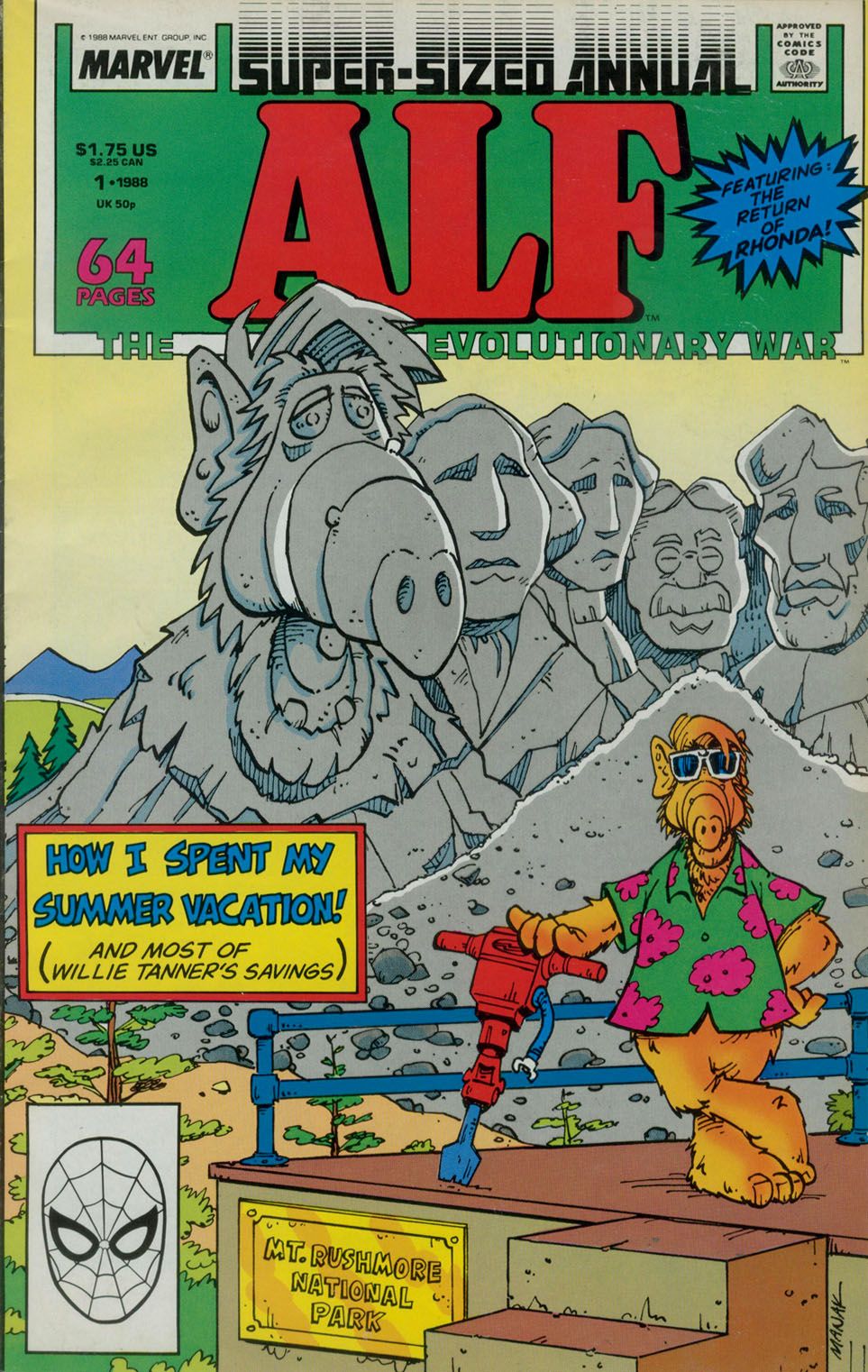 In the fifth ALF story in the volume, the young boy in the family (ALF’s best friend), Brian, goes to camp. ALF mistakenly thinks that it is a bad place (he thinks it is basically Stalag 17) so he tries to rescue young Brian. On the way to the camp (he’s mailed himself with a Fed-Ex like company) he is contacted by none other than the High Evolutionary!!! 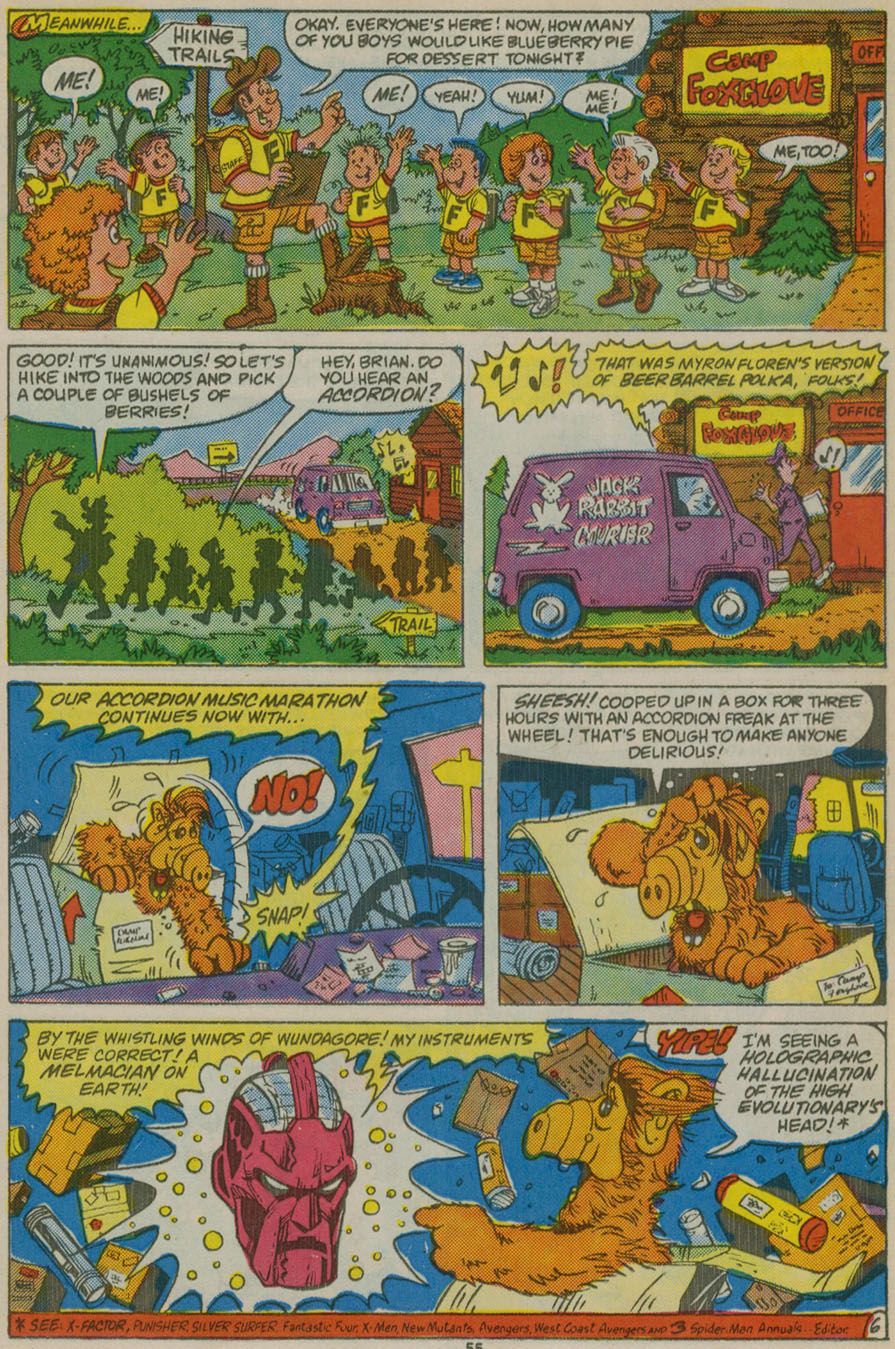 (Notice the joking reference about their being THREE Spider-Man Annuals. People really used to think it was excessive when there were three Spider-Man titles. Oh, how little they knew was coming).

The High Evolutionary wants information from ALF, but obviously, he is busy on his camp adventure, so he is able to get the Evolutionary to back off for a little bit and agree to contact him later on… 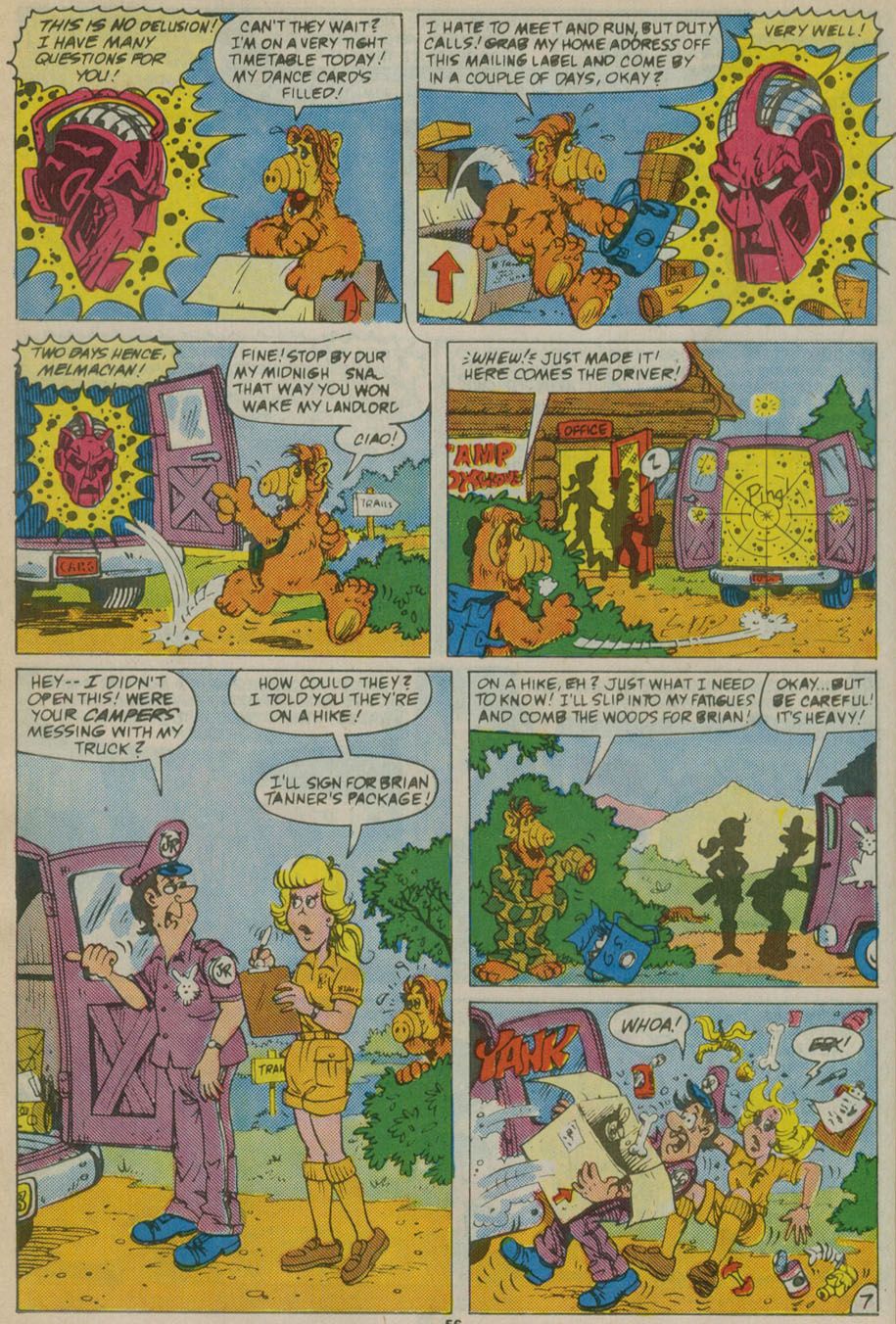 Alf then is contacted again by the High Evolutionary later in the annual, as the Evolutionary is interested in the history of ALF’s home planet, Melmac, but he is sad to learn that the planet has been destroyed (Evolutionary automatically assumes that it was Dark Phoenix who destroyed it)… 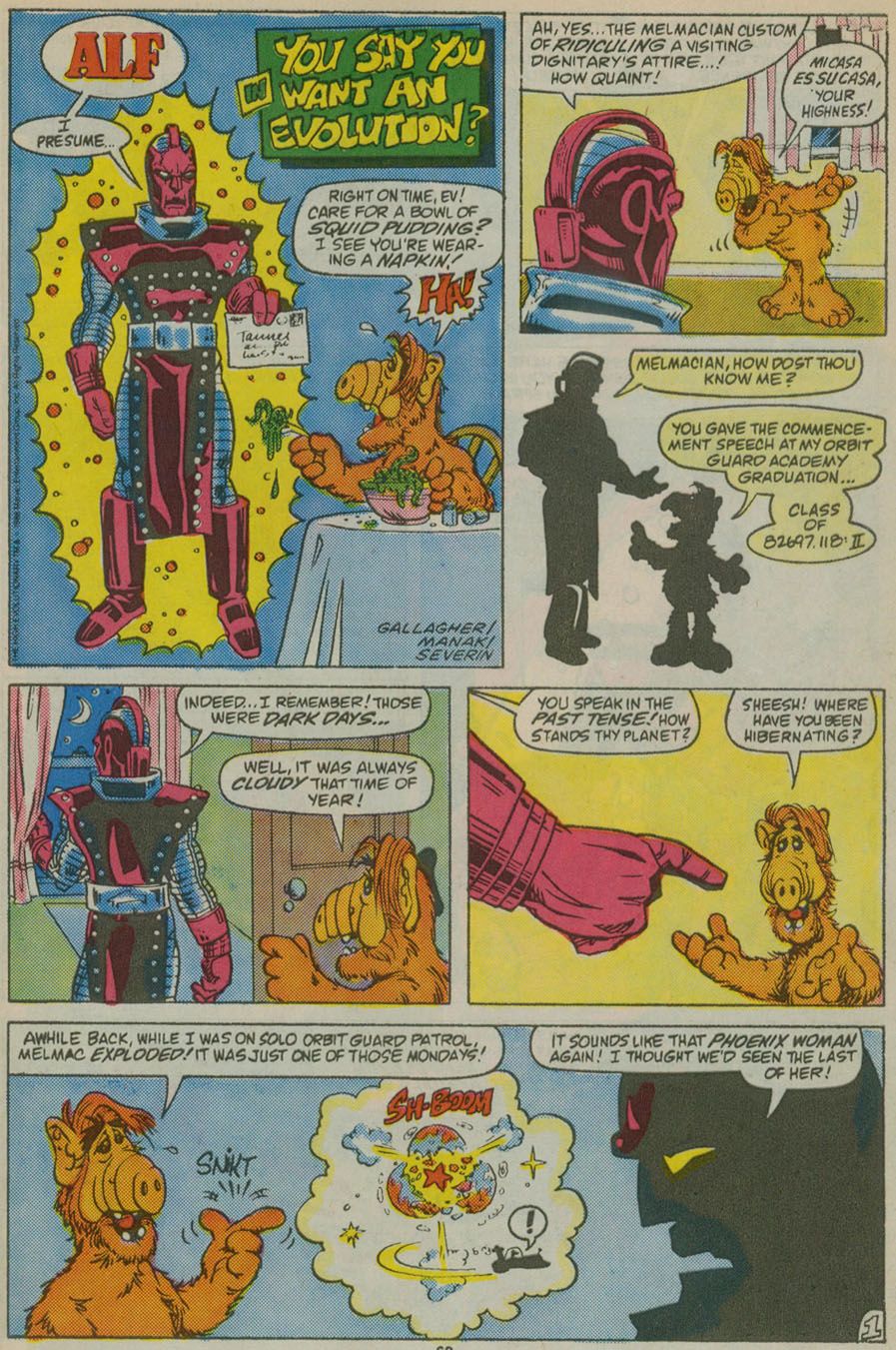 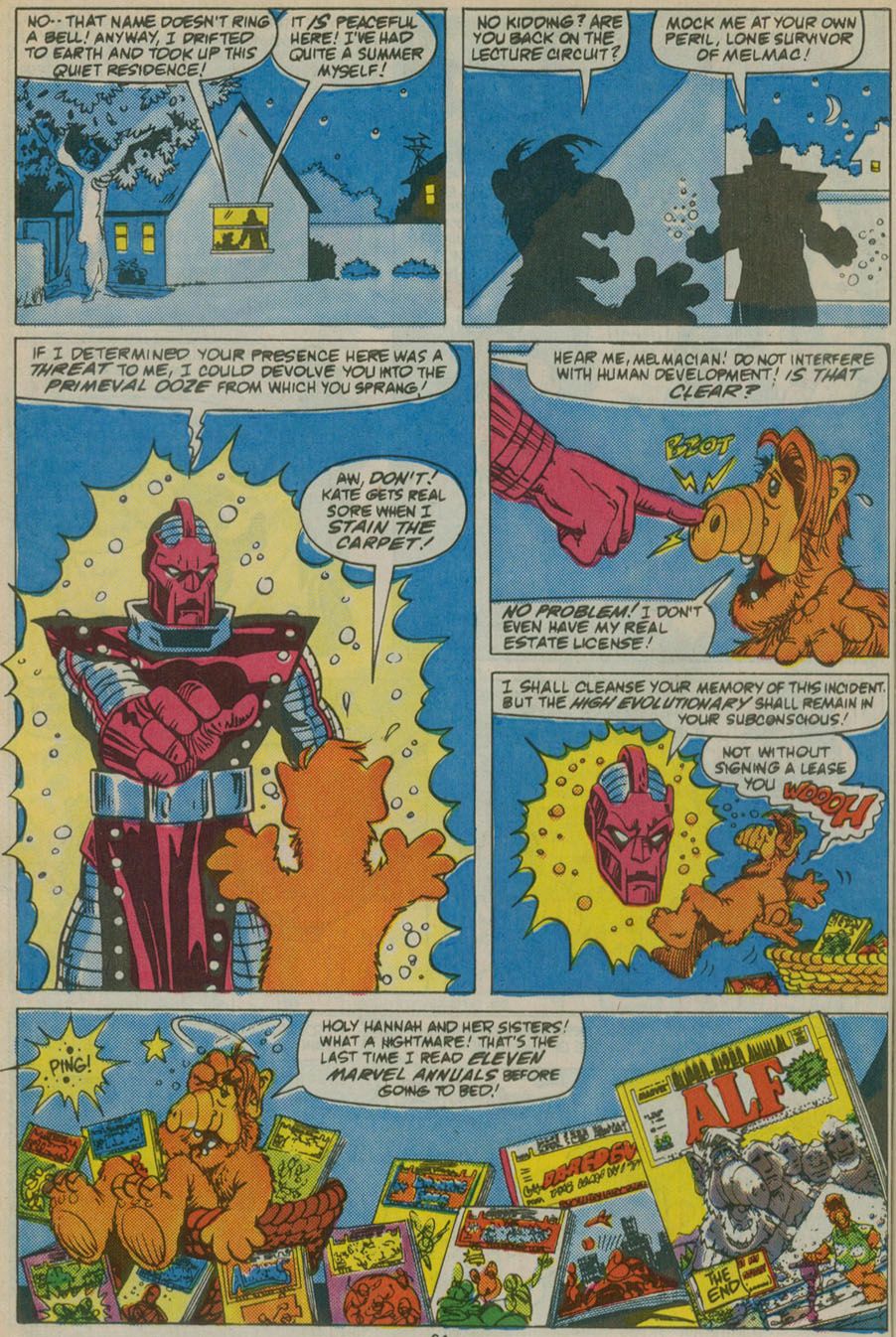 The story cleverly suggests that it could have just been a dream, driven by ALF reading all of those many annual tie-ins, but it also clearly COULD have happened (a later Official Handbook entry confirmed that it DID, in fact, happen).

KEEP READING: How Wolverine Made Black Widow the Guardian of an Infinity Stone

https://ift.tt/0RfLM2b No Holds Bard will take literature’s most famous author, William Shakespeare, and turn him into a 1960s-era superhero. from