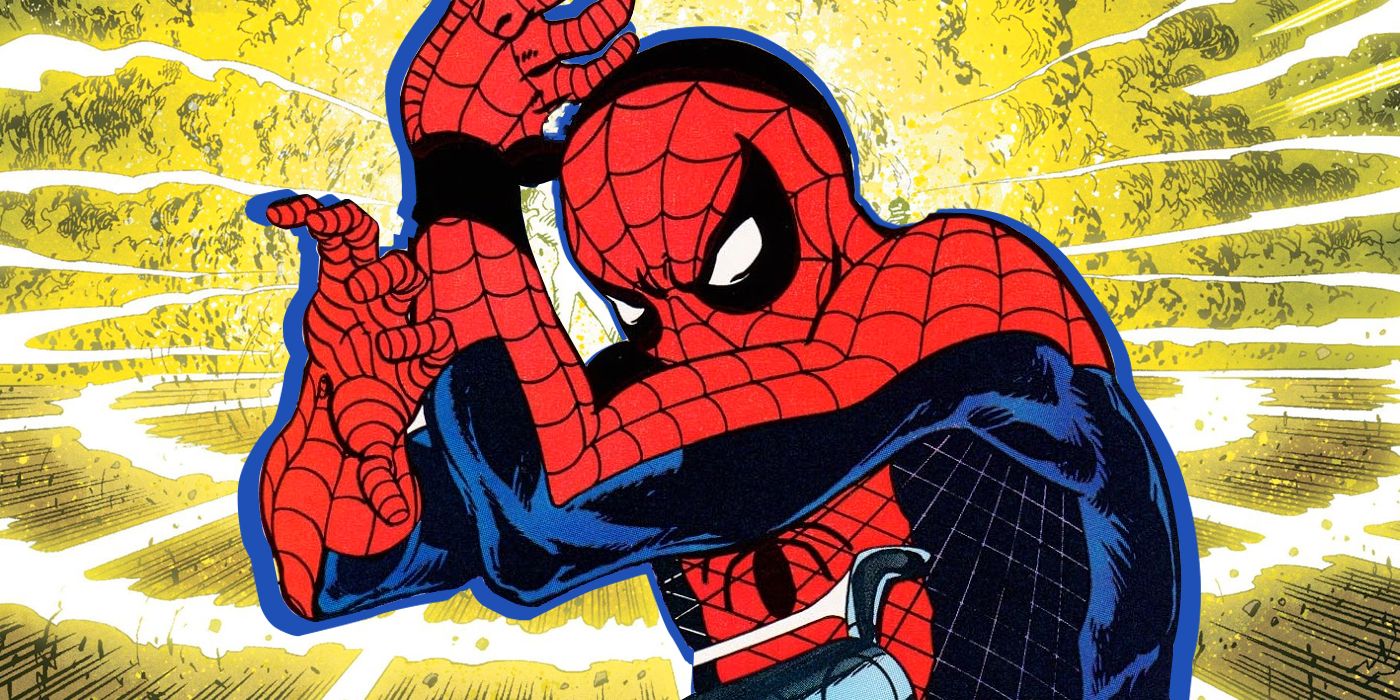 Today, we look at how Web of Spider-Man made a change in approach after Marvel received a bomb threat over a storyline in the title.

This is a “Gonna Make a Change,” which takes a look at the odd evolution that comic book series used to make. You see, nowadays, when a comic book series wants to re-tool, comic book companies simply cancel the book and start a brand-new series (heck, change a creative team and books will often reboot). In the old days, however, comic book companies felt that they had too much capital invested in the higher numbers and wanted to avoid starting over with a new #1. So we got to see some weird changes over the years.

In the early 1980s, Marvel published three Spider-Man titles, Amazing Spider-Man, Spectacular Spider-Man and Marvel Team-Up. As the direct market became a bigger deal as the decade continued, Marvel felt that Marvel Team-Up was losing steam. As I’ve noted a few times over the years, team-up books were really popular during the age of newsstand comic book sales, because kids would get TWO heroes for the price of ONE, but the stories almost inherently did not have any impact on the major continuity of the characters in question, since you couldn’t really change anything about your guest star character (except for rare examples when the guest star was a no-name, but that would typically hurt sales if they WERE no-names) and since you were so busy trying to explain why Spider-Man teamed up with this other hero, there typically was no place to advance Spider-Man stories. So in 1985, Marvel Team-Up was canceled and replaced by Web of Spider-Man.

However, the series then went through five different writers in the first dozen issues. Part of the “problem” was that the book did not exactly have a focus (presumably because it didn’t have a regular creative team).

Eventually, David Michelinie, Marc Silvestri and Kyle Baker appeared to become the “regular” creative team for the series, and the new focus would be Peter Parker and Daily Bugle/Now Magazine (the news magazine that J. Jonah Jameson owned) reporter Joy Mercado would investigate stories “ripped from the headlines.”

Heck, the cover of Web of Spider-Man #16 even advertises the new direction of the series… 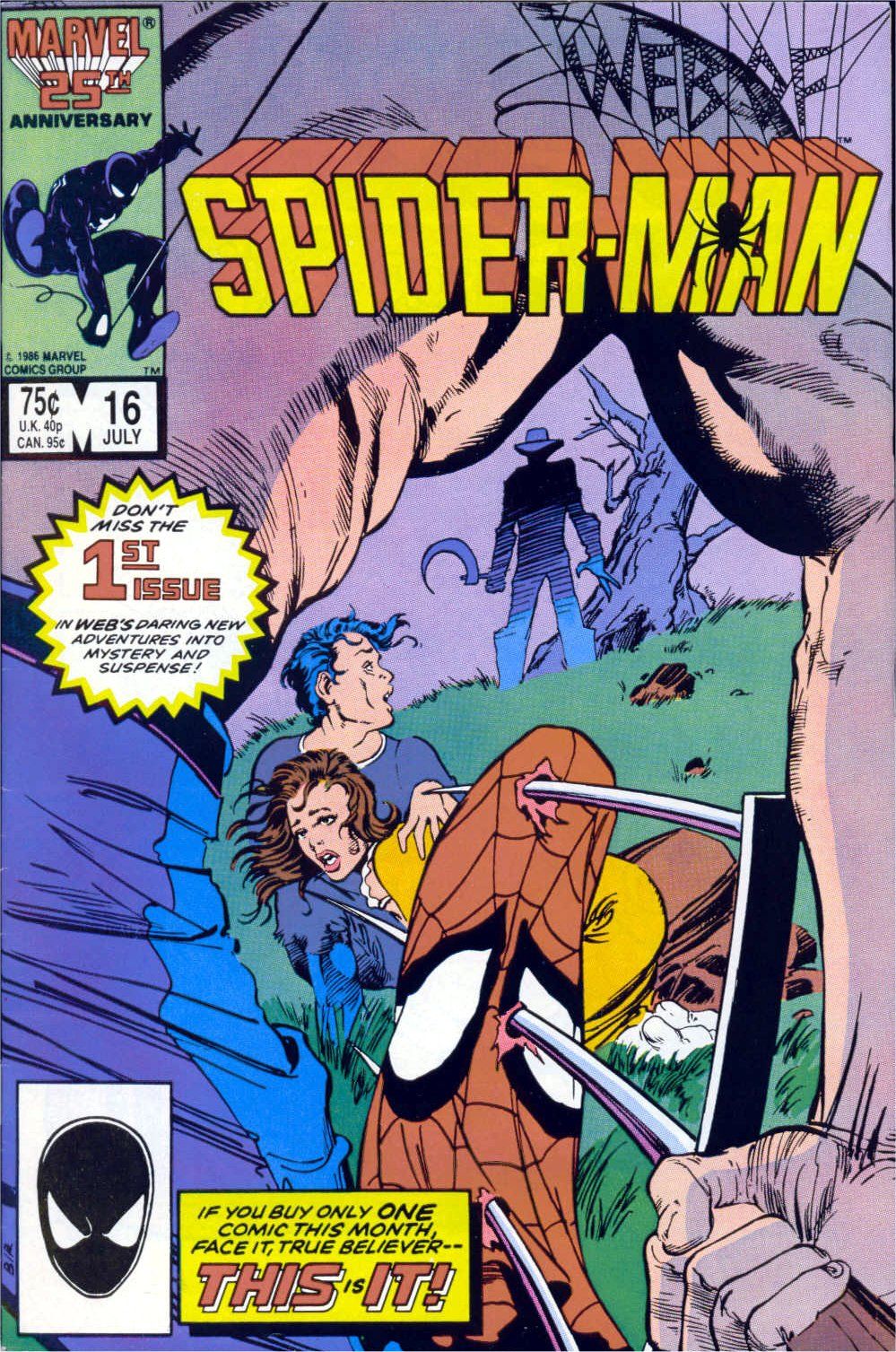 This new direction, though, would be short-lived.

Web of Spider-Man #19 set up a storyline involving the “Troubles” between Ireland and the United Kingdom, with Peter and Joy sent to England to cover the story… 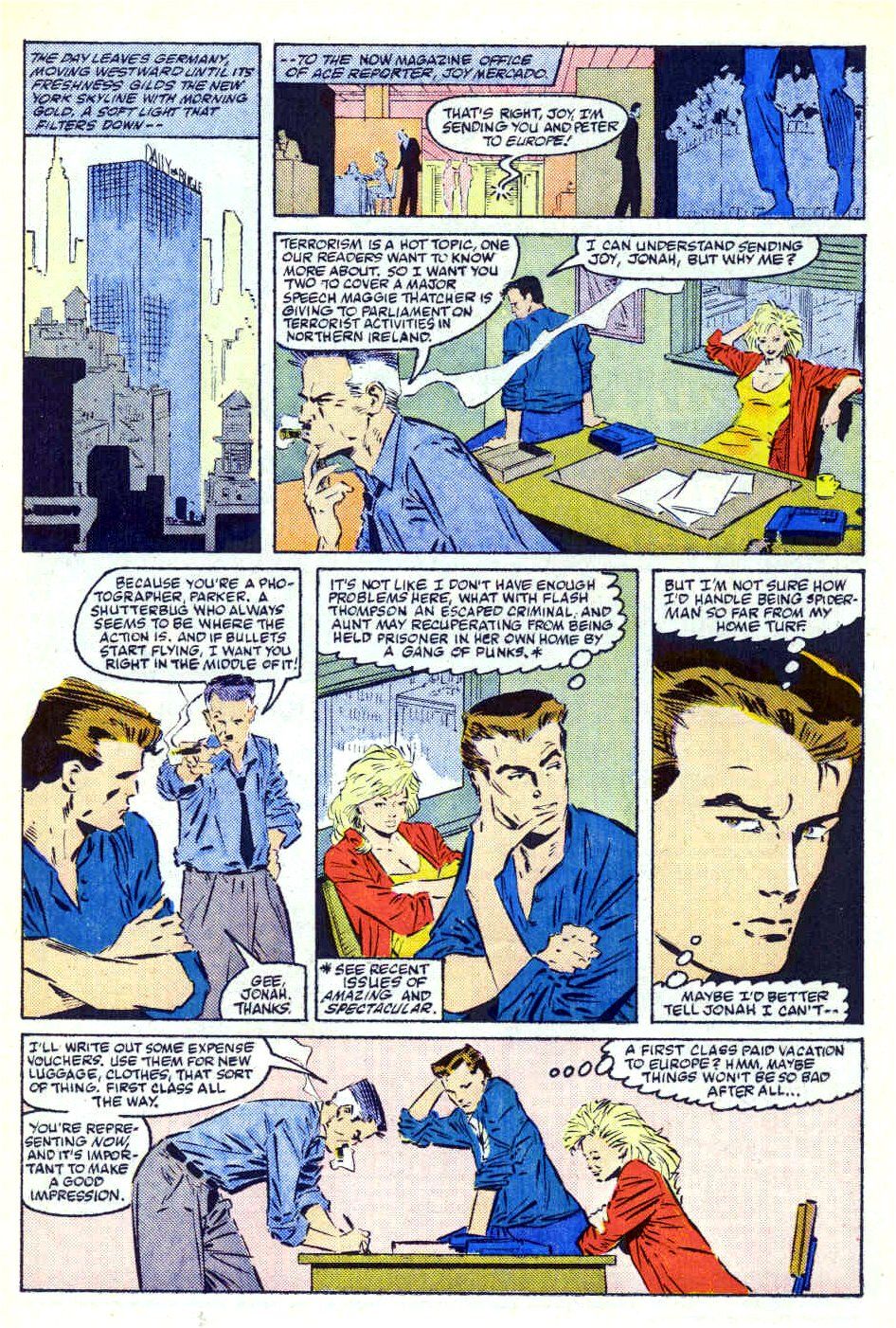 There is a bombing at the airport as soon as they arrive and Peter is really messed up about the aftermath, including the death of a young girl… 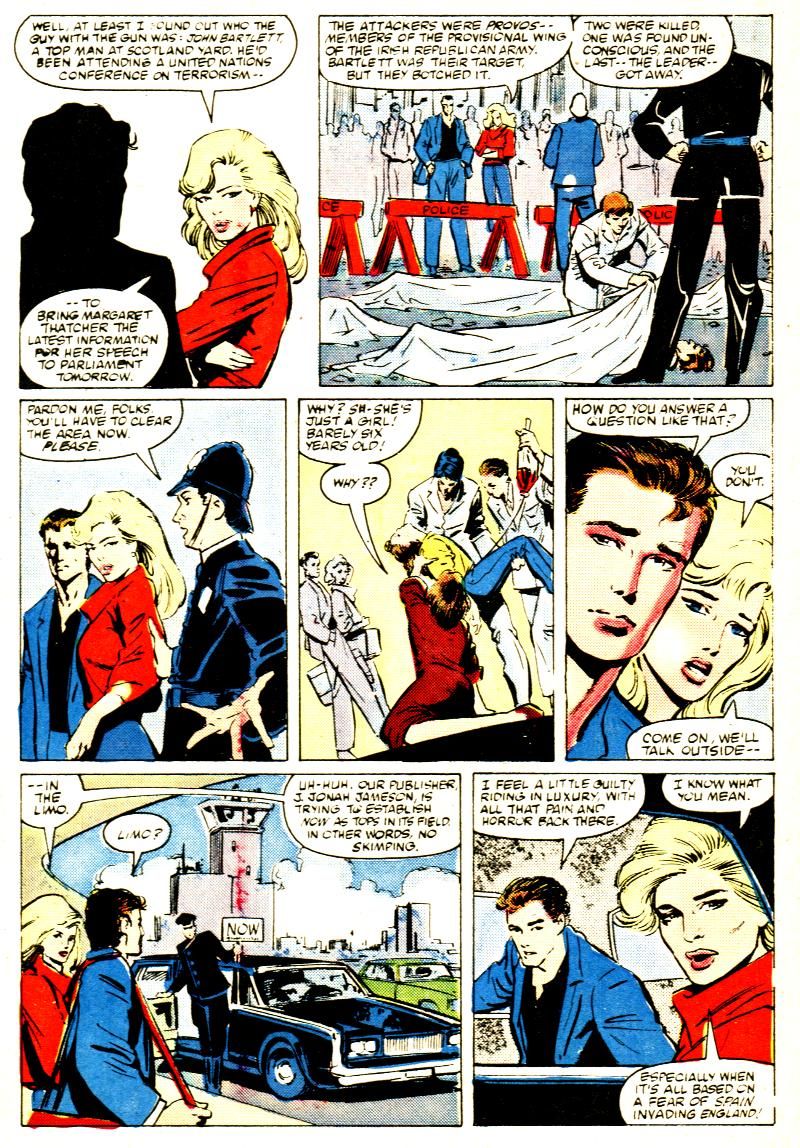 Michelinie then opines about the origins and history of the Troubles… 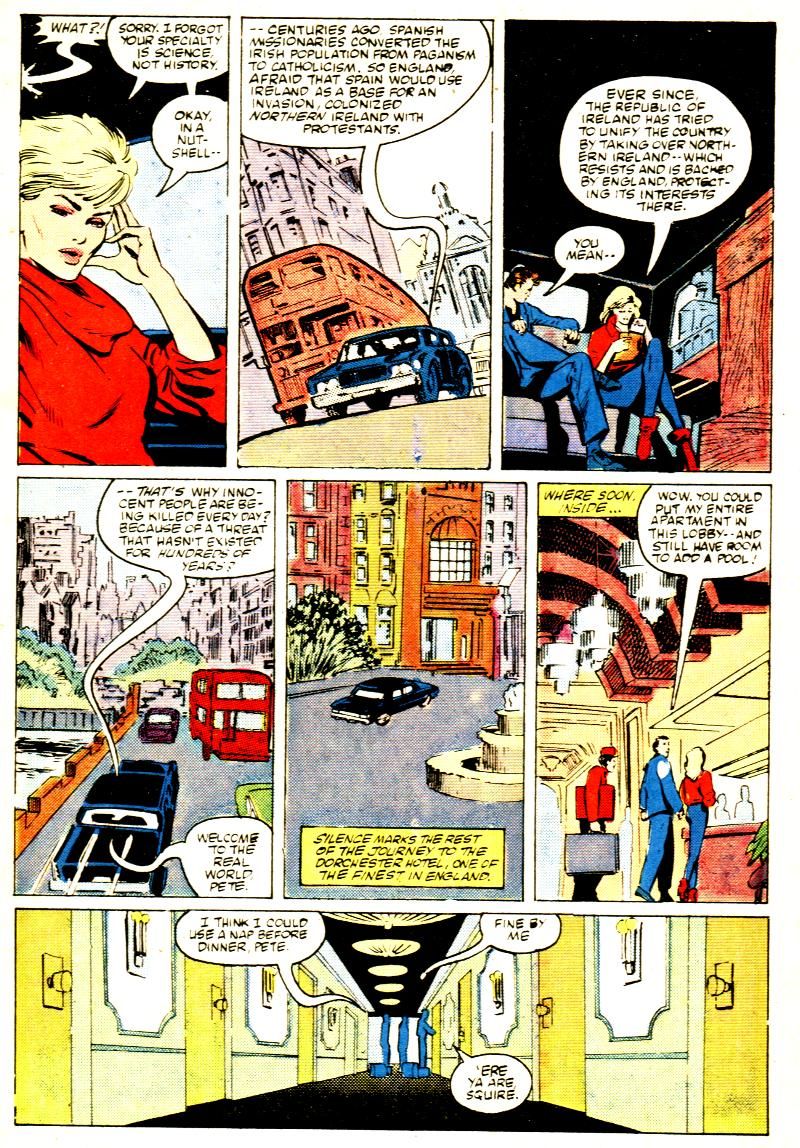 Peter and Joy head to Dublin at the end of the issue to investigate further. As you can see, the issue involved some takes on the politics that likely irked people on BOTH sides of the Troubles.

The following issue was suddenly a fill-in issue, with a framing sequence featuring Peter and Joy on a ferry over to Ireland.

Then, when they arrive, we discover that, whoops, nope, this wasn’t actually about the Troubles, at all, but it was actually an evil plot by Marvel’s resident evil corporation, Roxxon! 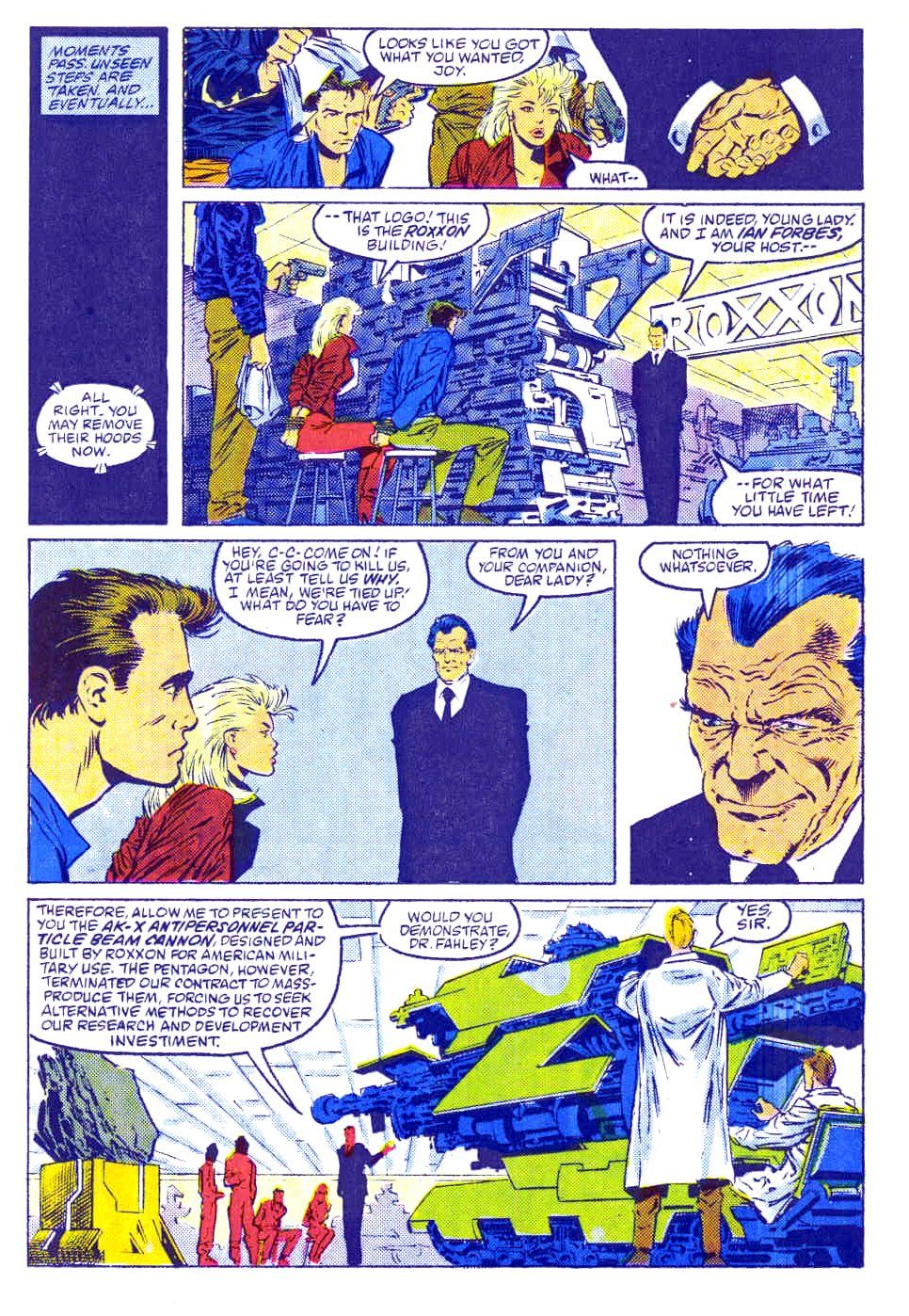 And the “terrorists” were all just fakes, hired by Roxxon as part of their evil plan of the week… 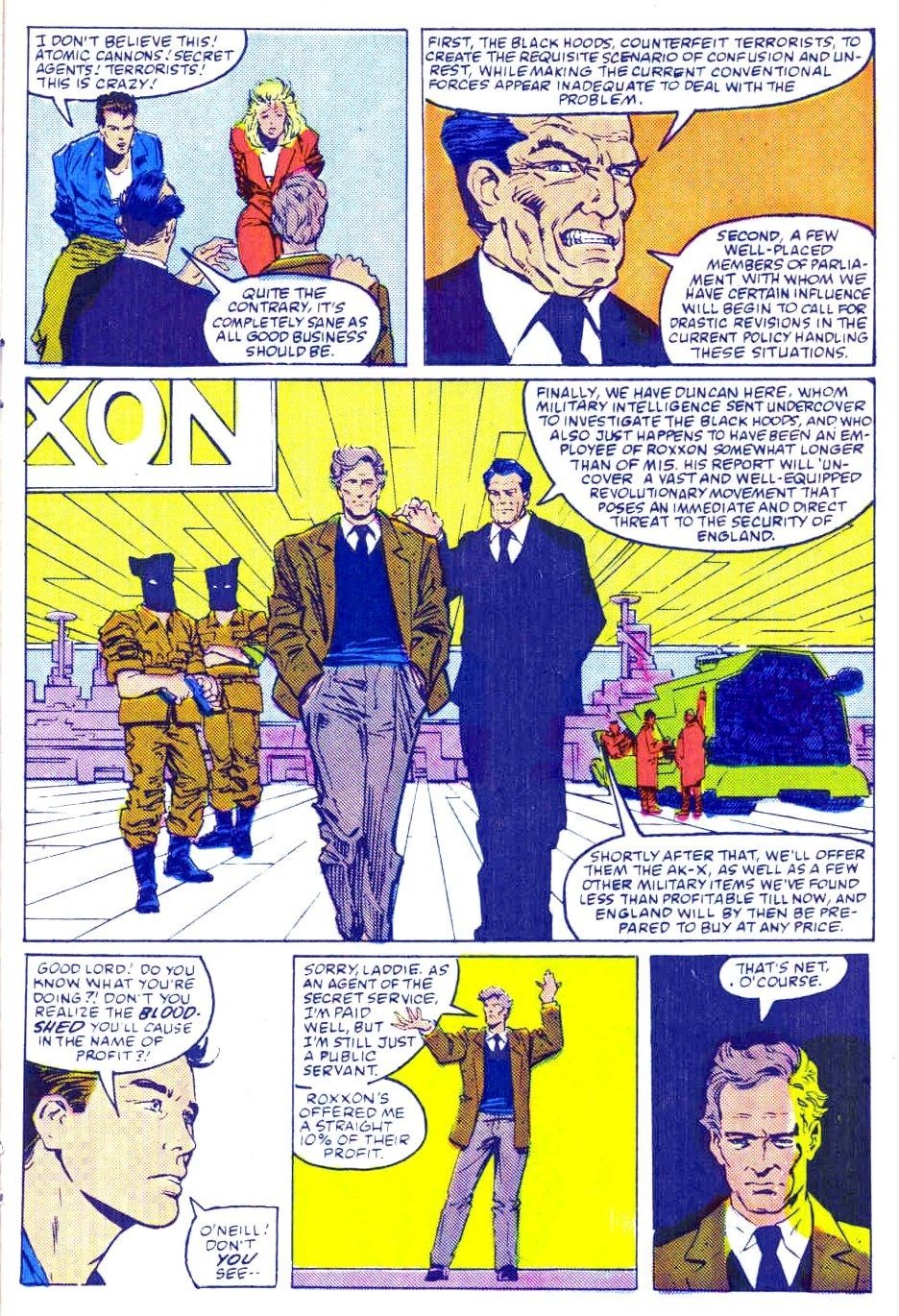 Once Roxxon was defeated, Peter and Joy headed back to the United States and this new angle was dropped entirely (Michelinie was then hired to write the main Amazing Spider-Man series and Silvestri became the artist on Uncanny X-Men).

But why the sudden change? As it turned out, it was all due to a bomb threat that Marvel received over the Troubles storyline. I asked Len Kaminski, who wrote the altered Web of Spider-Man #22, and he explained it all to me for a Comic Book Legends Revealed years ago:

It was originally a two-parter plotted by David Michelinie; the Irritated {alllegely} Residents {I only heard stuff second-hand, I wasn’t answering phones that week} Aggrieved made their objections Quite Sincerely Known to Marvel via Mr Graham Bell’s remarkable invention.

I can directly confiim that not only Marvel, but ALL OTHER OFFICES at the 387 Park Avenue South location had themselves a very hastily-organized surprise fire drill, emptying the building entirely (with the unexpected result of proving once and for all that the human contents of 387 PAS, when removed from the ten story structure and redistributed on a single plane (in this case, Manhattan sidewalk), the would, in fact, completely encircle the block demarcated by 387 PAS, E28th St, E27th St. and 3rd Avenue) in ranks approximately 8-15 humunits (a measurement coined by Gruenwald of course) deep.

Again, I did not take that call myself, but multiple sources told me outright this move was inspired by several calls that morning claiming there was an explosive device somewhere close by, and that there was a causal relationship between the previously mentioned SPIDEY story and Things That Go Boom.

Then-editor Jim Owsley hired me to re-write the second half to remove the elements that had been objected to. Overnight Using the existing word balloons, which had been whited out. Sort of the cage-match x-treme version of the old-skool DC practice of cooking up an insane cover, then making the writer create a story to justify it somehow, crossed with MadLibs reimagined as a bloodsport.

I can’t… ever… talk about the all-nighter I pulled Getting It Done. Go read both halves in light of this new information… and IMAGINE — it could have been — YOU!!

Isn’t that amazing? A whole new direction dropped because of a bomb threat! Web of Spider-Man just became a typical Spider-Man comic book series after that.

Thanks again to Len Kamninski for those powerful insights into the making of the story!

Okay, folks, if you have suggestions for comic book series that went through notable format changes that you’d like to see me spotlight, just drop me a line at brianc@cbr.com!

DC’s Death of the Justice League Will Kill Batman but Who Will Replace Him?