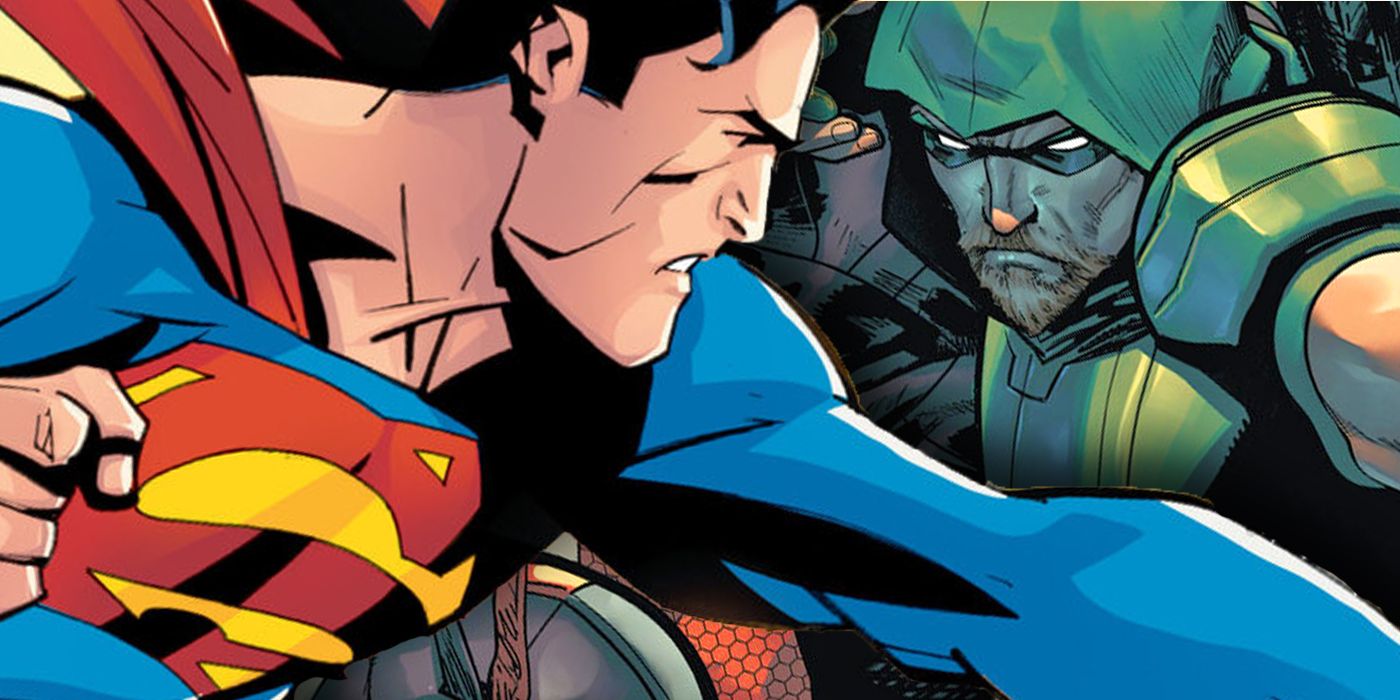 Green Arrow has never been the most powerful member of the Justice League, but that doesn’t mean he is any less dangerous. In fact, Oliver has actually done more harm to Superman than Batman ever has. Granted, a majority of these events take place in alternate worlds or futures, but even then, it is very often Oliver Queen who does Superman the most lasting damage.

It may be coincidence that it is the Green Arrow who ends up hurting Superman the most when heroes find themselves on opposing sides, but it could also be a deliberate decision. While Batman may be considered the most ordinary member of the Justice League when considering mainstays among its roster, there is an aspect of the character that dehumanizes him. He stands alongside the likes of Superman and Wonder Woman as an equal. In contrast, Green Arrow is much more human, interacts with people more easily and is seen as significantly less of a threat than Batman. So really, he is perfect for the role of dealing Superman truly devastating blows. It’s a classic case of David versus Goliath. The most recent example of this is found in Dark Knights of Steel #1 (by Tom Taylor, Yasmine Putri, Wes Abbott). 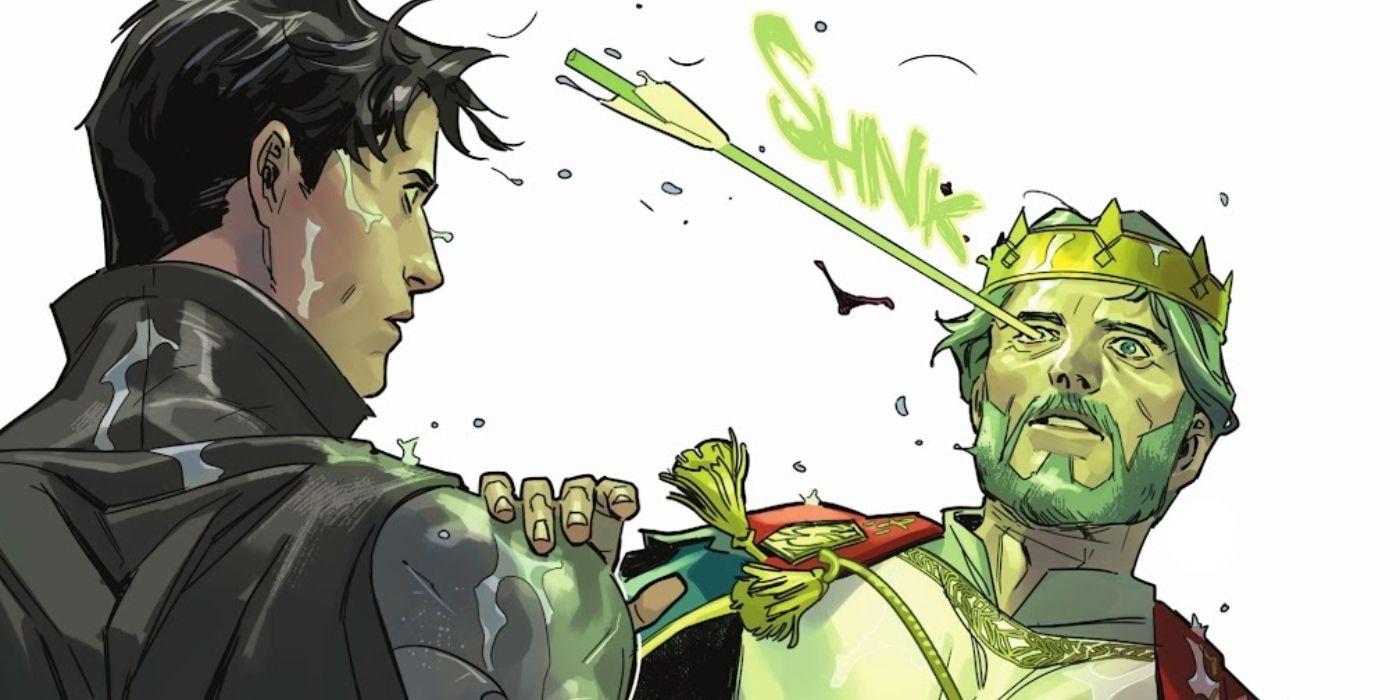 The most recent attack on the Man of Steel was in the alternate world of Tom Taylor’s Dark Knights of Steel. Set in a medieval fantasy setting where Superman’s parents traveled to Earth and formed a kingdom to raise their son in, Green Arrow found himself serving the opposing Kingdom of Storms, ruled by Black Lightning.

Fearing what the Kryptonians could do to the world, Green Arrow was sent on a mission to assassinate King Jor-El, a mission he achieved. Here, Green Arrow managed to deal a lasting blow, but it might have been one of the few times that his attack was unprovoked, at least on Kal-El’s part. This isn’t even the first time one of his arrows found its way into Superman’s father. 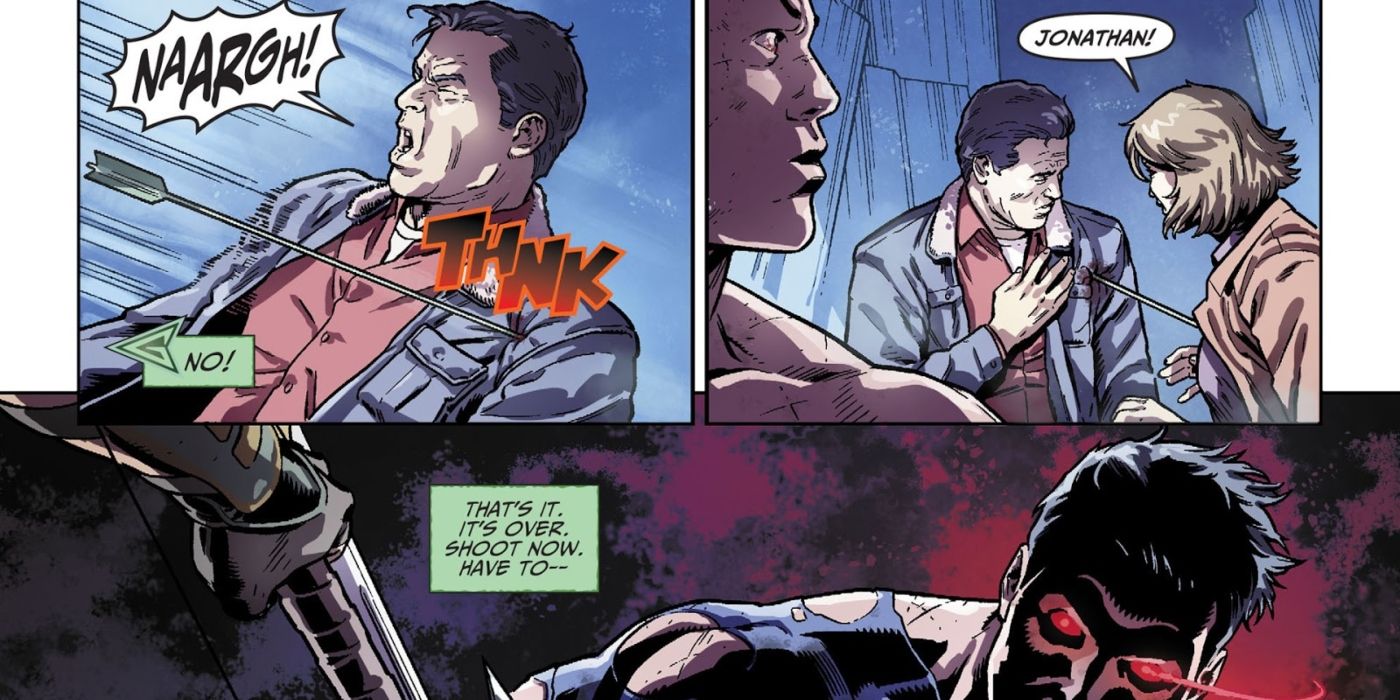 In the Injustice universe, also by Tom Taylor, Green Arrow accidentally shot Jonathan Kent, Superman’s adoptive father, with an arrow that ricocheted off of Superman. The reason he fired at his former friend was because Superman was becoming increasingly tyrannical and even developed a way to enhance his soldiers with Kryptonian durability, an edge that would have seen Batman’s growing resistance killed off in its infancy. Green Arrow infiltrated the Fortress of Solitude to steal a sample of the miracle pill to help his allies. Unfortunately, Superman found him.

The resulting standoff saw Green Arrow shoot at Superman. His shot didn’t hurt the Man of Steel, of course, but it found its way into Jonathan Kent. Despite the blow not being fatal, Superman was enraged, having only recently lost his wife and unborn child. Despite his father’s pleas to stop, Superman proceeded to beat Green Arrow to death, one the most unforgivable things he did in this alternate universe. Even then, Green Arrow still got the last laugh, managing to send the pill he stole to safety and giving his friends a weapon to use that would be a big part of defeating their fallen friend a few years later. 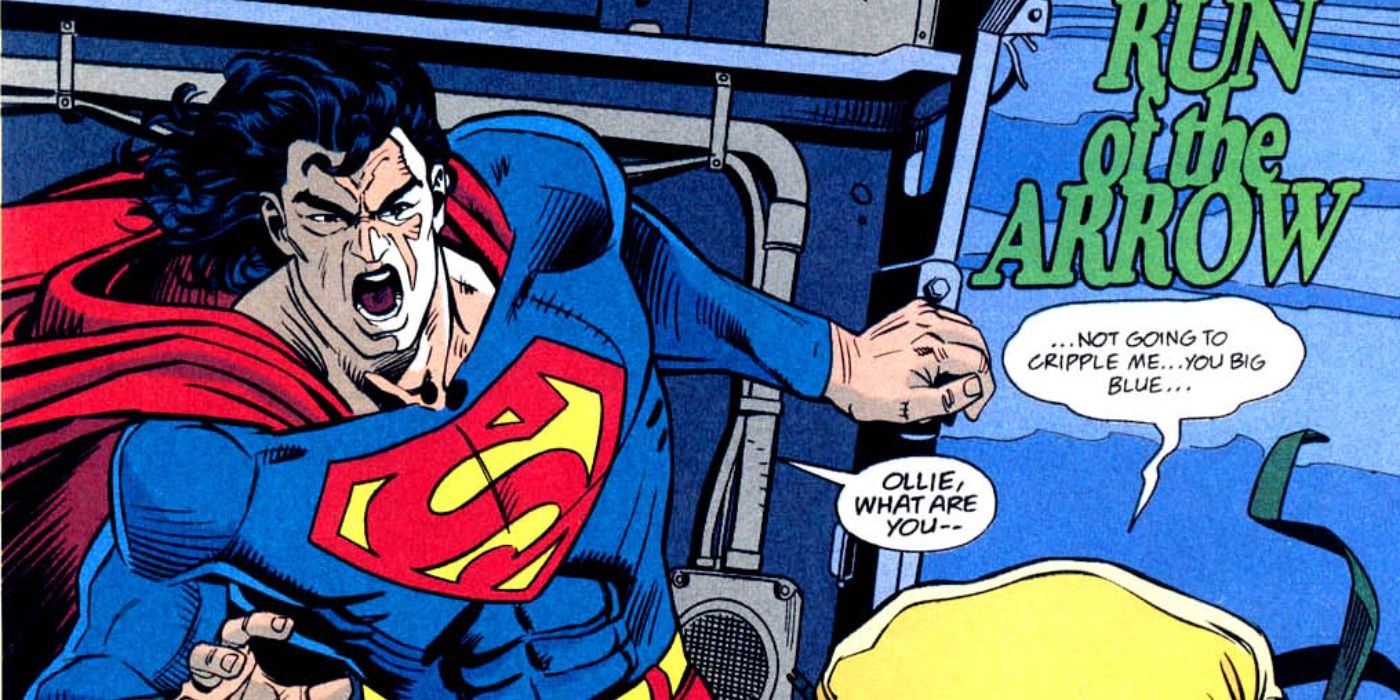 Then there was the time that Green Arrow deliberately wanted to hurt the Man of Steel. In The Dark Knight Returns (by Frank Miller, Klaus Janson, Lynn Varley, John Costanza), after superheroes are outlawed by the government, Green Arrow continued his activities as a vigilante, waging a one -man war on government oppression. At the same time, Superman aligned himself with the United States government to gain legal permission to continue protecting people. The two came into conflict at some point, resulting in Green Arrow losing his arm, for which he blamed Superman. So to even the score, when Batman fought Superman, Green Arrow shot an arrow of kryptonite dust at him, weakening his former friend and allowing Batman a fairer fight.

Sometimes Green Arrow didn’t have to physically harm Superman or his family, he could just take him himself off the field. In Green Arrow #100 (by Chuck Dixon, Jim Aparo, Gerry Fernandez, Lee Loughridge, John Costanza), he was trapped in a tenuous situation. His hand was on a dead man’s trigger for a mutagen bomb on a plane aimed for Metropolis. If he let go, the bomb would explode, killing him, but sparing everyone else. If he didn’t, the plane would crash into the city and the bomb would still explode, killing everyone else. That was when Superman arrived, but even he couldn’t find a clean way out of this.

The only solution he could find was to sever Oliver’s arm, leaving his hand holding the trigger, but crippling Oliver to save his life and the lives of millions. This was a deliberate homage to The Dark Knight Returns, but Oliver did not want to lose his arm and chose to refuse Superman by letting go, sacrificing himself instead to save the city.

RELATED: Aquaman Reveals He Has No Respect for Another Justice League Hero’s Powers 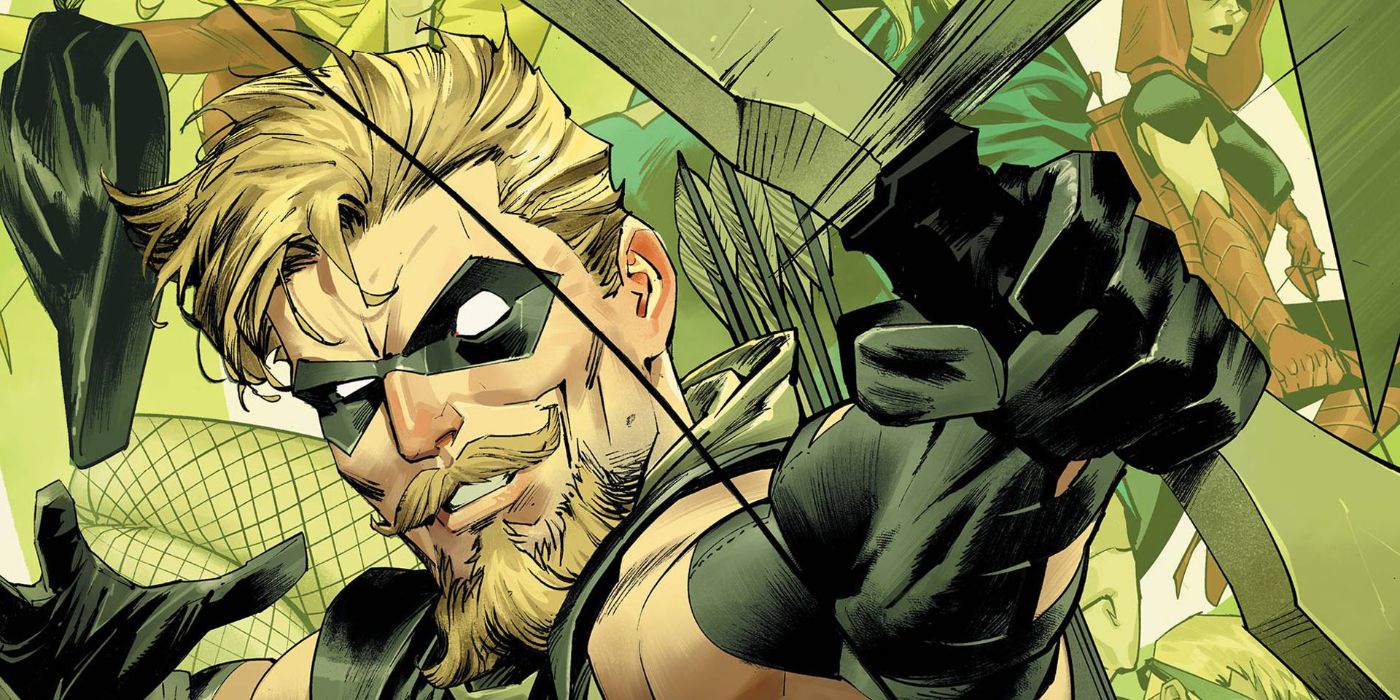 There are a number of lesser offenses that Green Arrow has made against Superman, such as spying on him during Kingdom Come (by Mark Waid, Alex Ross, Todd Klein), but overall, Green Arrow has done some lasting harm to Superman both physically and emotionally simply by standing in his way. In no way could he stand against the Man of Steel after, but his determination and sheer grit would see Oliver make choices that Superman could not be prepared for, allowing him to beat Superman in ways that even Batman never could.

It also factors in how everyone underestimates his skill. Oliver is never truly considered one of the more dangerous members of the Justice League, but that gives him an edge all its own. He’s unpredictable to most people, especially someone like Superman, who never considers the outcome of a fight because he can’t contemplate that Green Arrow would win. In that regard, he is right. Green Arrow would lose a straight up fight, but he might lose an eye, or a father, doing it.