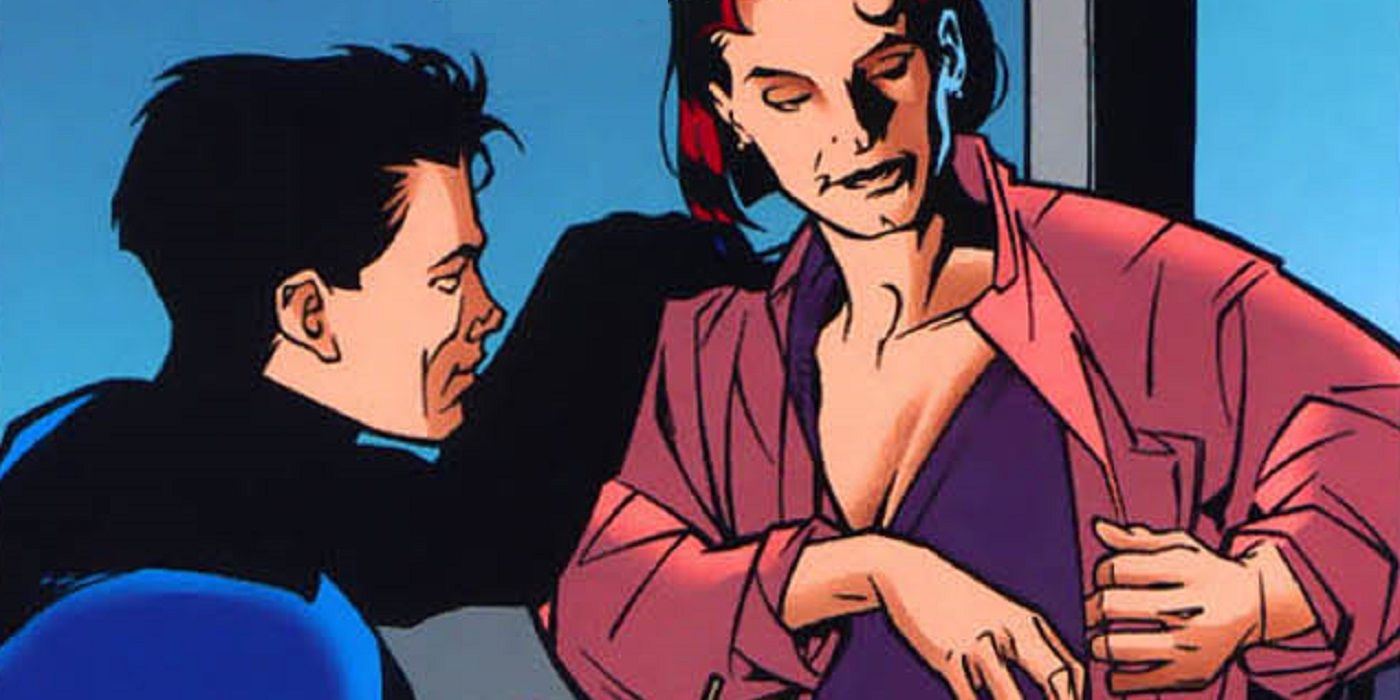 Today, we look at a hilariously adorable holiday story involving Nightwing and Oracle as they reflect on some holiday misunderstandings they had back when they were Robin the Boy Wonder and Batgirl, respectively.

And now, a bit late, Day 9 will be opened (once opened, the door will feature a panel from the featured story)… 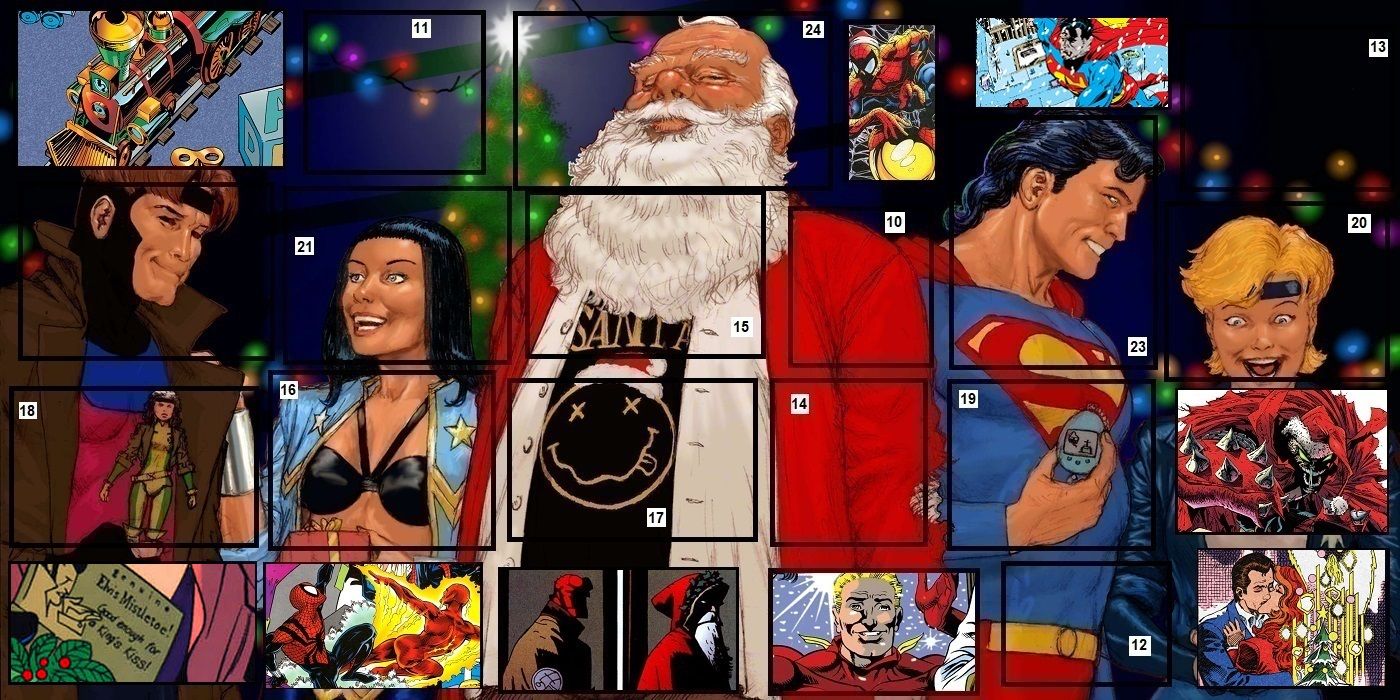 In the 1990s, the name of the game in comic books was, generally speaking, excess. Generally speaking, for many years, the standard amount of books for the very top comic book heroes was three. Batman and Superman both maintained two solo titles (Batman and Detective Comics and Superman and Action Comics) plus one team-up title (World’s Finest Comics) for decades before the effects of the “Bat-Mania” of the 1966 Batman TV series saw Batman add a second team-up series, The Brave and the Bold, to his ledger. DC briefly tried to even things up a couple of years later by making World’s Finest Comics a non-Batman title (and have Superman team up with other non-Batman heroes), but eventually it once again saw the Dark Knight and the Man of Steel split the title and in the late 1970s Superman just got his own brand-new “solo” team-up series, DC Comics Presents. By that point, Spider-Man had added a third solo title, as well (Amazing Spider-Man was first joined by Spidey’s team-up series, Marvel Team-Up, in 1970, and then in 1976, Spider-Man received a new series, Spectacular Spider-Man, that was nominally about giving Spider-Man’s supporting characters their spotlight while Amazing Spider-Man was free to do less subplots (this was back when Marvel’s series had dropped down to just 17 story pages. Not a whole lot of room for checking in on J. Jonah Jameson and Aunt May when you only have 17 pages each month). Into the 1980s, that was the basic status quo – Batman and Superman had two solo books and two team-up books apiece and Spider-Man had two solo books and one team-up book.

In the 1980s, team-up books went out the door, and instead, Brave and the Bold became Batman and the Outsiders, which was done by 1986. In 1987, Action Comics became Superman’s team-up series while Superman was re-named Adventures of Superman so that DC could launch a brand-new Superman #1. A couple of years earlier, Marvel Team-Up had given way to Web of Spider-Man. Batman got back to three titles with the 1989 launch of Legends of the Dark Knight. By this time, Action Comics had gone back to a solo Superman title (after a short stint as a weekly anthology series), giving him three, as well. 1990 saw Spider-Man gain a fourth book, Spider-Man. Superman and Batman soon followed suit, with Superman adding Superman: The Man of Steel in 1991 and Batman getting Batman: Shadow of the Bat in 1992. These were key moves, as now it meant that there were nominally weekly adventures of Batman, Superman and Spider-Man, right?

Well, except there are 52 weeks in a year, not 48, so what about those “missing” weeks? As it turned out, Marvel and DC were happy to help fill in those gaps, and 1993 saw the release of the quarterly Spider-Man Unlimited and 1995 saw the releases of the quarterly series, The Batman Chronicles and Superman: The Man of Tomorrow. While perhaps excessive, Spider-Man Unlimited and Batman Chronicles being oversized books allowed for some excellent off-the-beaten path short stories, especially Batman Chronicles #5, where Kim Yale and John Ostrander came up with an “Oracle: Year One” for Barbara Gordon, a character that they had saved from the scrap heap in Suicide Squad after Barbara was basically thrown into comic book limbo after being assaulted in Batman: The Killing Joke. That story was drawn by the brilliant Brian Stelfreeze (and his inker, Karl Story), who developed a lot of the elements of Oracle in that era, including her famous symbol. Around that same time, Stelfreeze also re-designed Nightwing’s costume to a look so iconic that it is still Nightwing’s costume (with some tweaks over the years, of course). Two issues later, Batman Chronicles #7 introduced a new writer to DC, Devin Grayson, who caught fandom by surprise by her excellent story (drawn by the great Rodolfo Damaggio) reuniting Dick Grayson and Donna Troy for their first shared story in quite a while.

Two issues after that, in 1997’s Batman Chronicles #9, Grayson and artist Duncan Fegredo showed the first team-up of Robin and Batgirl and it was ADORABLE… 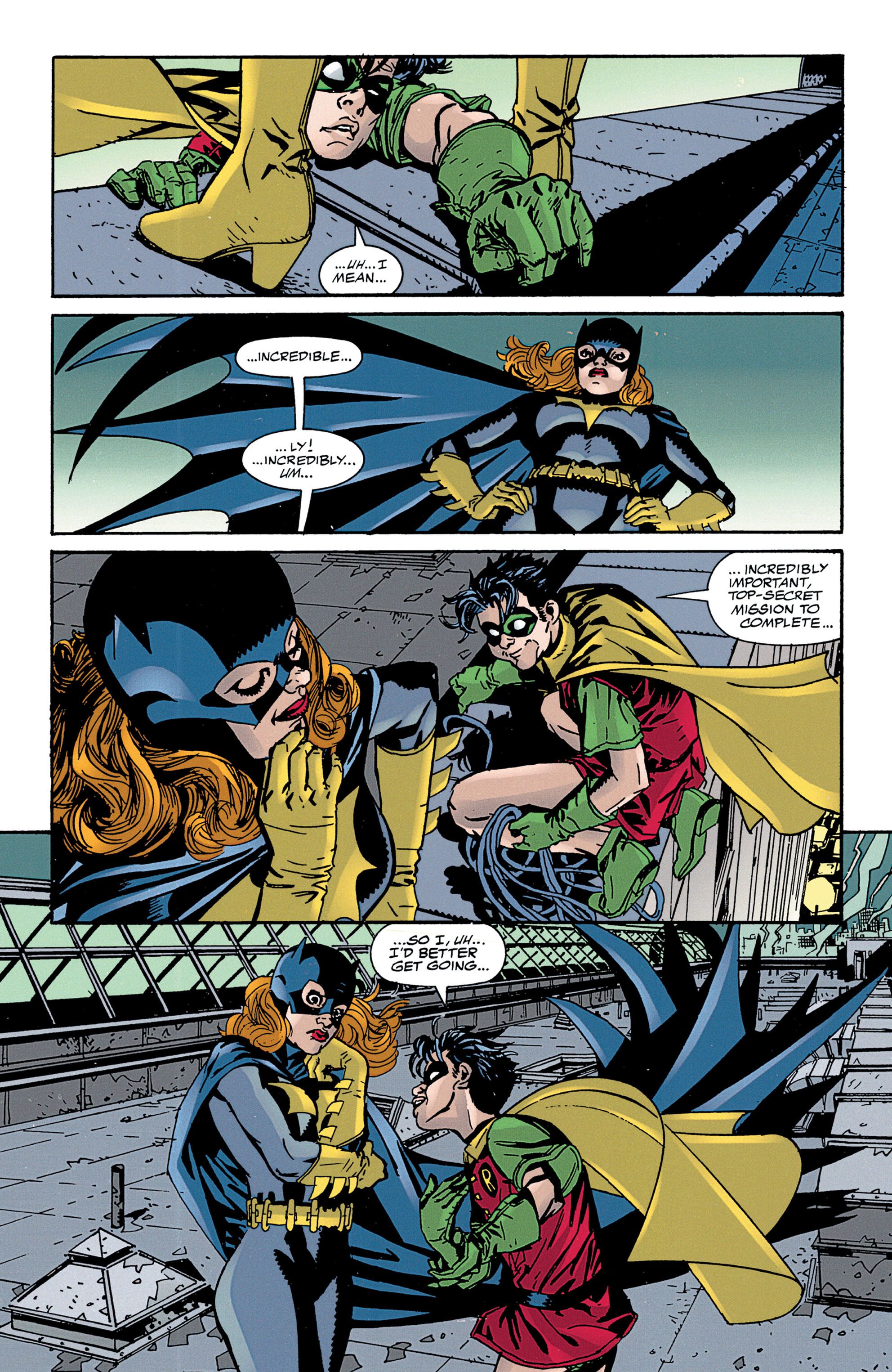 So it was only fitting that Stelfreeze and Grayson would combine their powers in 1997’s DCU Holiday Bash #2 for an adorable holiday story of Dick Grayson (now Nightwing) and Barbara Gordon (now Oracle) sharing a secret (well, not to Batman. He knows everything) annual New Year’s celebration with each other.

As they eat takeout together on the roof of Oracle’s base of operations, they reflect on their pasts as heroes, with Nightwing revealing that he used to believe that mistletoe was actually a supervillain known as Missile Toe, who presumably shot missiles from his toes… 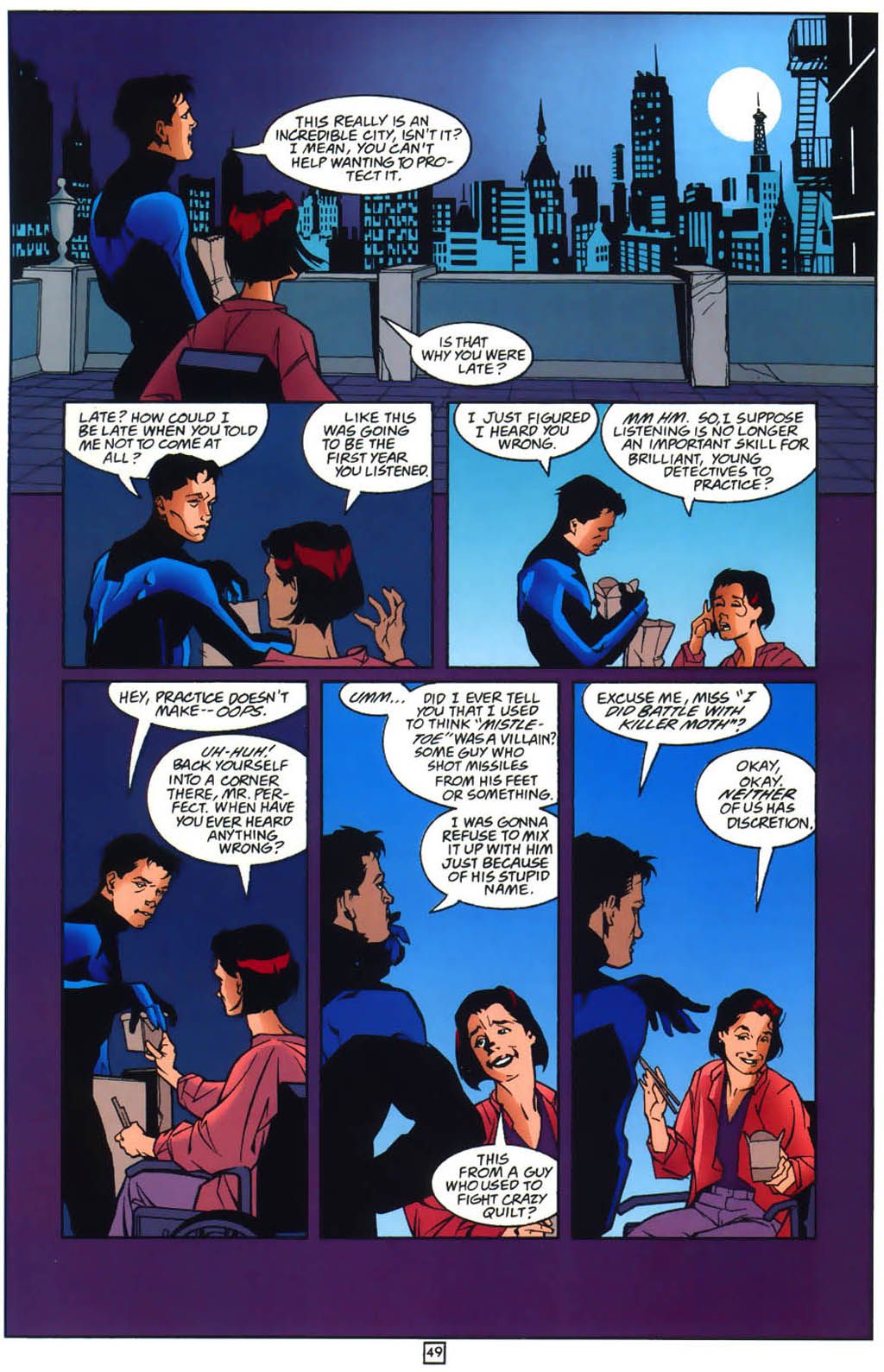 Barbara explained that her photographic memory doesn’t help her if she mishears something, like when she believed that “Auld Lang Syne” was “Old Lane sign”… 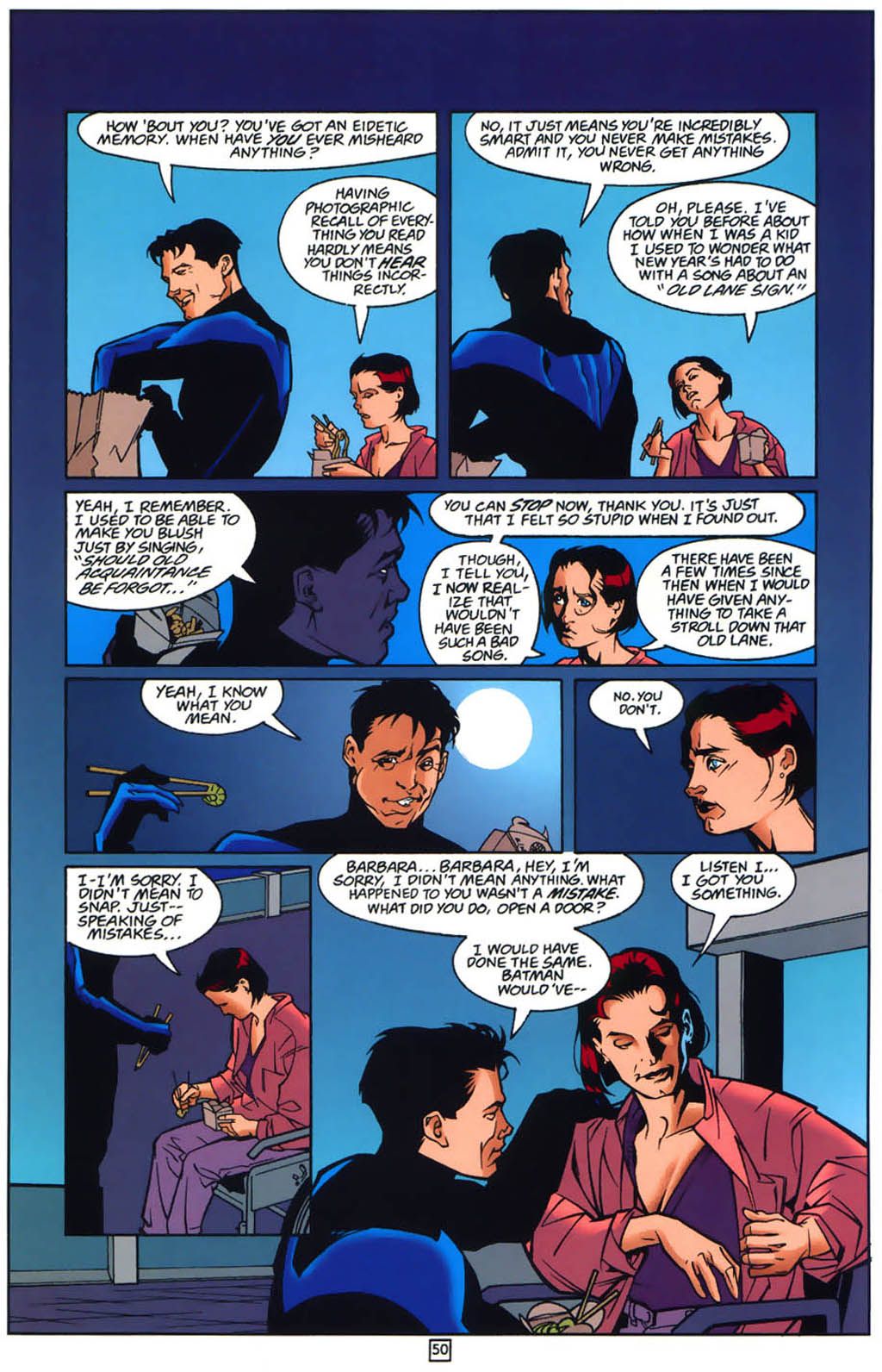 Barbara then gives Dick a present of some mistletoe. There is then a bit of awkwardness about Barbara’s wheelchair and how she obviously still blames herself for her injury at the hands of the Joker in Killing Joke, which Dick tries to dispel, but it is too late and the mood is now a bit ruined, so Barbara turns in for the night.. 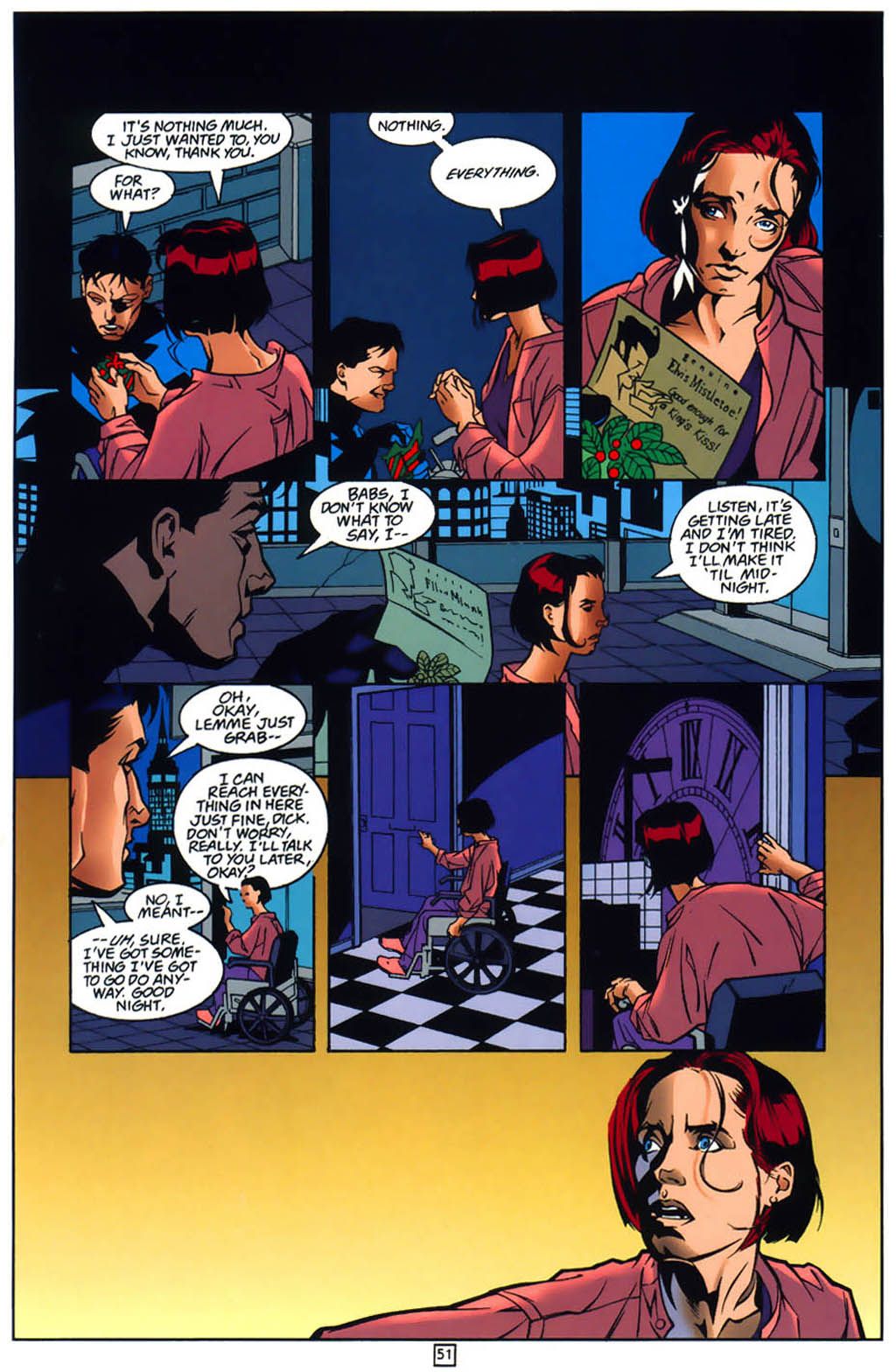 And, of course, she returns to her base to discover that Dick had given her an “Old Lane” sign as the world’s most adorable holiday present… 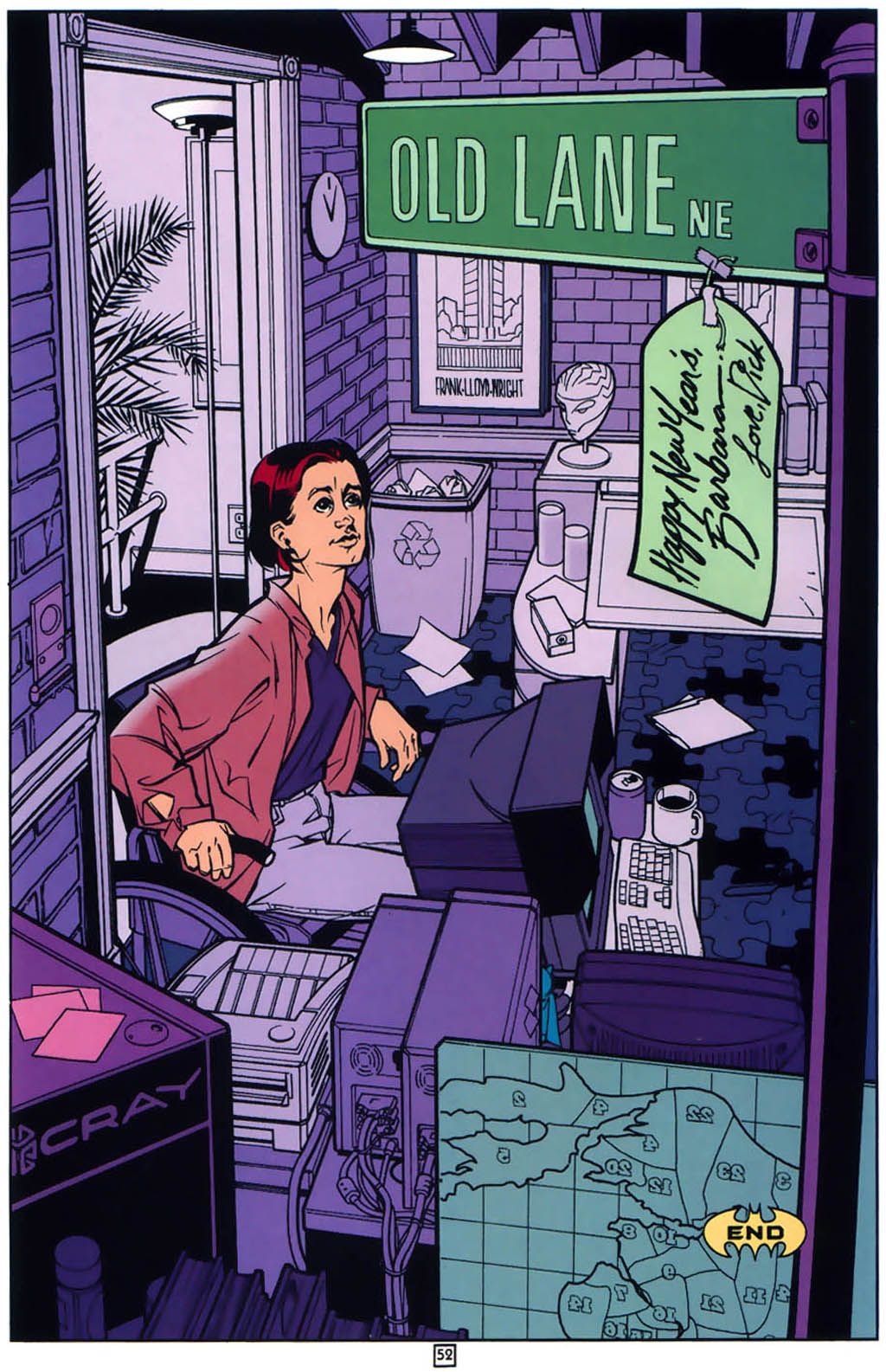