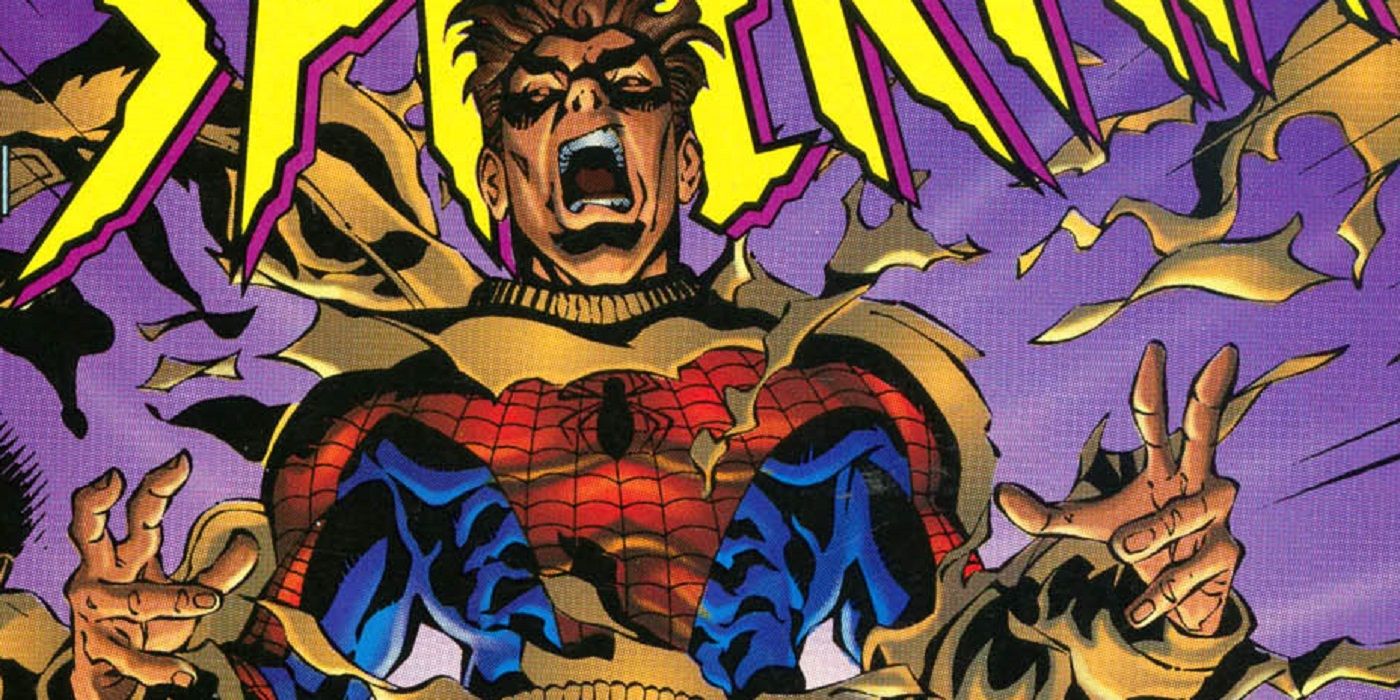 Today, we look at an oddly sentimental moment shared between Spider-Man, X-Man and…a dead Aunt May?

And now, Day 2 will be opened (once opened, the door will feature a panel from the featured story)… 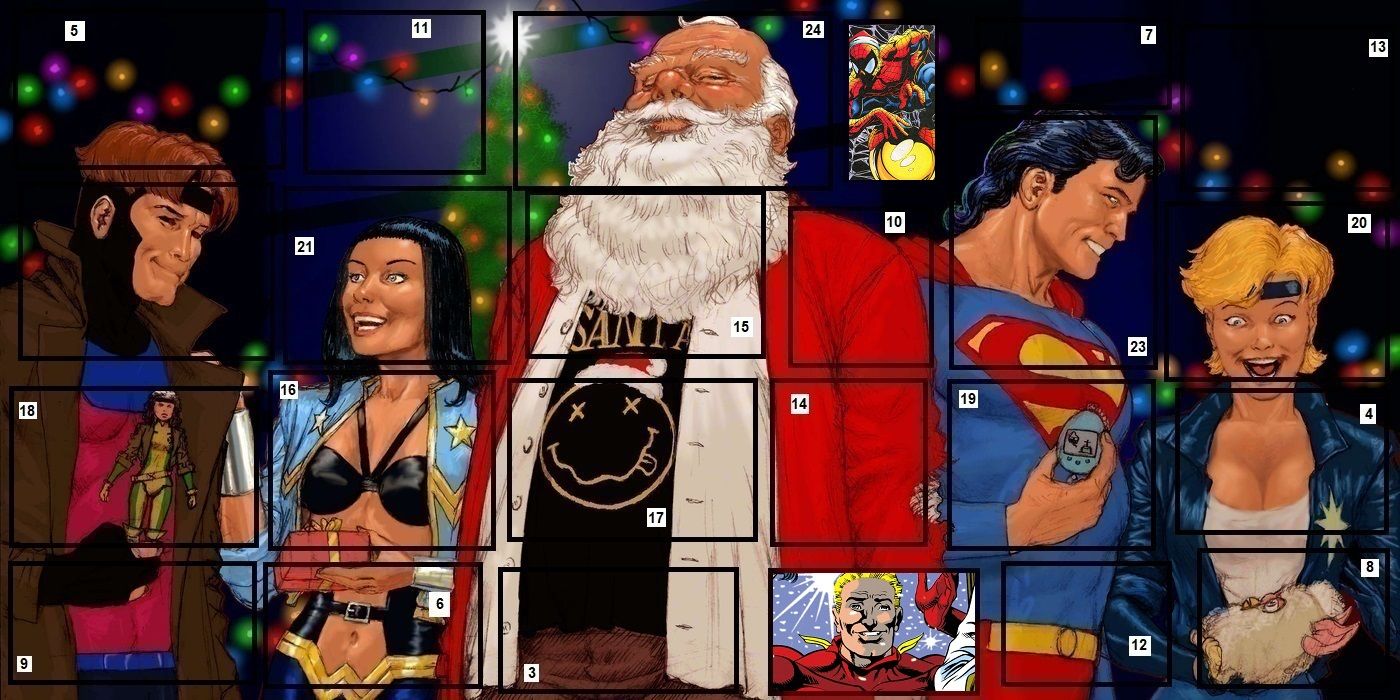 Late 1996 was a strange time for the Spider-Man line of titles. After briefly having Ben Reilly take over as Spider-Man (with the reveal that Ben was the REAL Peter Parker and the hero we thought of as Peter Parker was the ACTUAL clone), Peter Parker had returned as Spider-Man with Ben Reilly revealed as the ACTUAL clone (right when Ben died and had basically exploded, proving he was a clone). With Peter back as the main hero in the book, the various writers of the series tried to stress just HOW young Peter and his wife, Mary Jane (who had just lost their daughter to a stillbirth), were. They both went back to college and they were living with Mary Jane’s Aunt Anna, who took on the role of the well-meaning older parental figure who Peter had to hide his secret identity from that was temporarily vacated by Aunt May Parker (who was thought to be dead at the time, having died during the Clone Saga, where she revealed that she had known Peter was Spider-Man all along. Aunt May later turned out to be alive).

Meanwhile, late 1996 was also a weird time for X-Man, as well. Launched as part of “The Age of Apocalypse,” Nate Grey was a sort of alternate version of Cable (since Cable couldn’t exist in an alternate reality, Nate Grey was basically what Cable would have been had he not had been turned into a cyborg-like being), but he survived the alternate reality and came over to the “main” Marvel universe. The title was created by the then-creative team of Cable, writer Jeph Loeb and penciler Steve Skroce. They both continued on X-Man (the fascinating aspect of the “launch” was that X-Man #1 was set in “Age of Apocalypse,” so X-Man #5 was the real “first” issue of the series), but eventually both moved on to other titles. Terry Kavanagh took over writing X-Man. The problem with X-Man was that he had no real specific purpose as a character, so he sort of wandered around aimlessly.

Peter Parker is assigned to do a photo essay on Nate, who at this point in time was doing a sort of “mystic in Central Park” routine, where people would come to him for help. He and Peter become friends (although it is awkward after Nate tears of Peter’s clothes to show that he is Spider-Man) as they bond over their respective rough upbringings, with Peter’s whole sad Uncle Ben tale…

and Nate has his whole Age of Apocalypse problem… 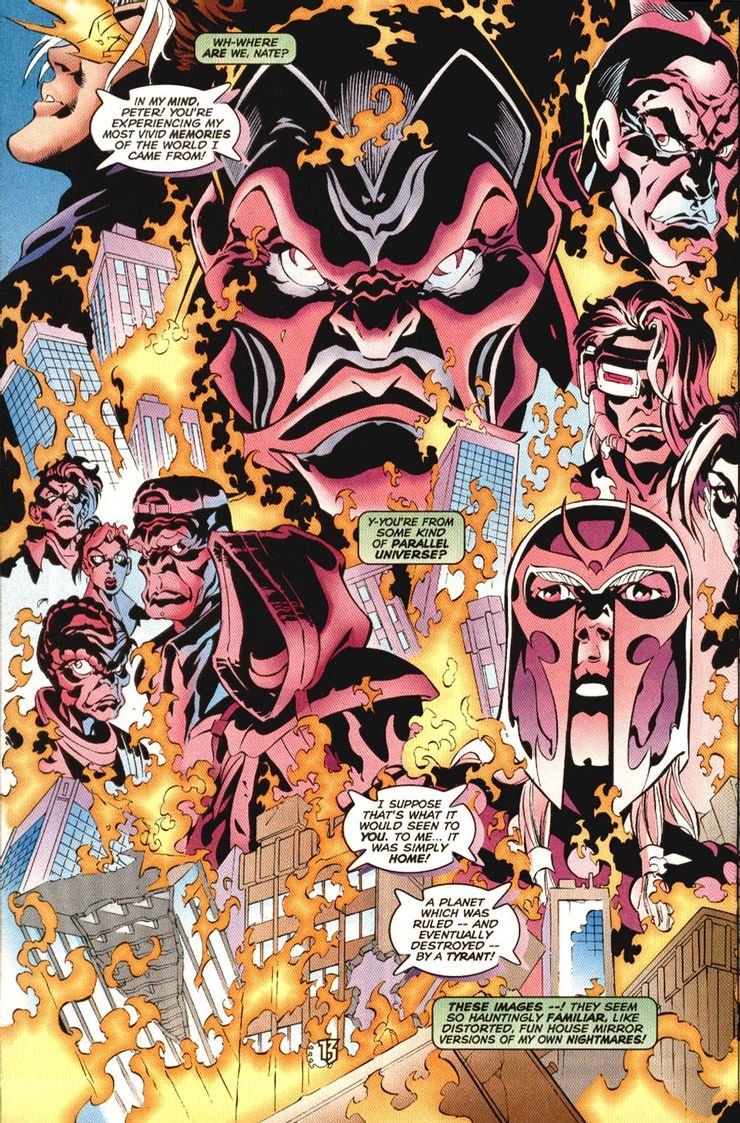 Peter invites Nate over for Christmas Eve dinner with him, Mary Jane and Aunt Anna and it is a cute visit… 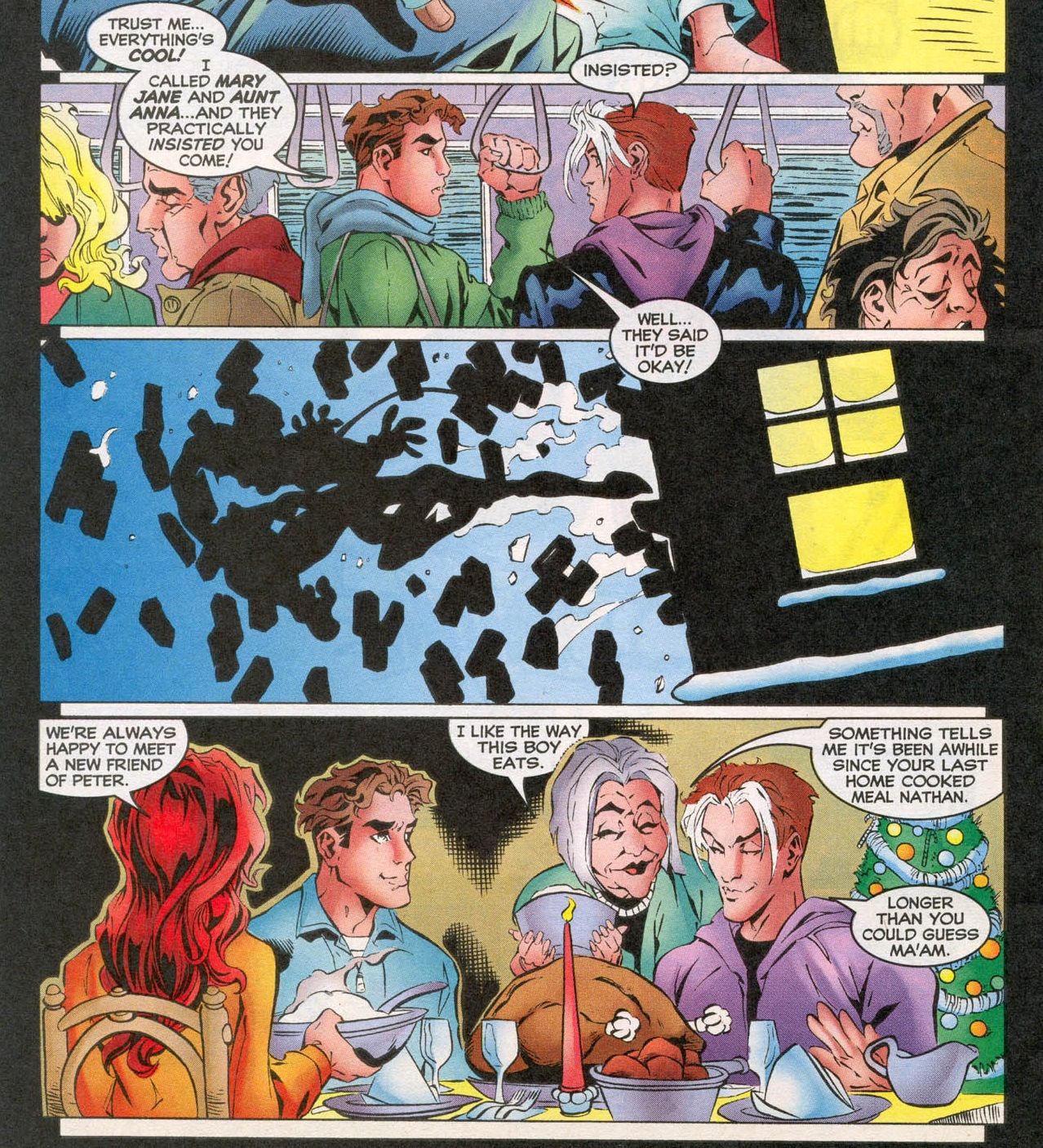 It really is fascinating to me to see how they tried to make Aunt Anna “happen” as a character. This was someone who had been around for DECADES and yet NO ONE knew ANYTHING about her other than her being a nice older lady and now suddenly she’s supposed to take the place of Aunt May? I totally get why they tried it, but it was an odd fit to say the very least.

Well, in response to Peter having him over for dinner, Nate uses his telepathic powers to “give” Peter a visit with his dead Aunt May on Christmas Eve, a sort of fascinating twist on the idea of being visited by ghosts on Christmas and Nate allows Peter to come to terms with the loss of both his Aunt May and his stillborn daughter (who was also going to be named May)…. 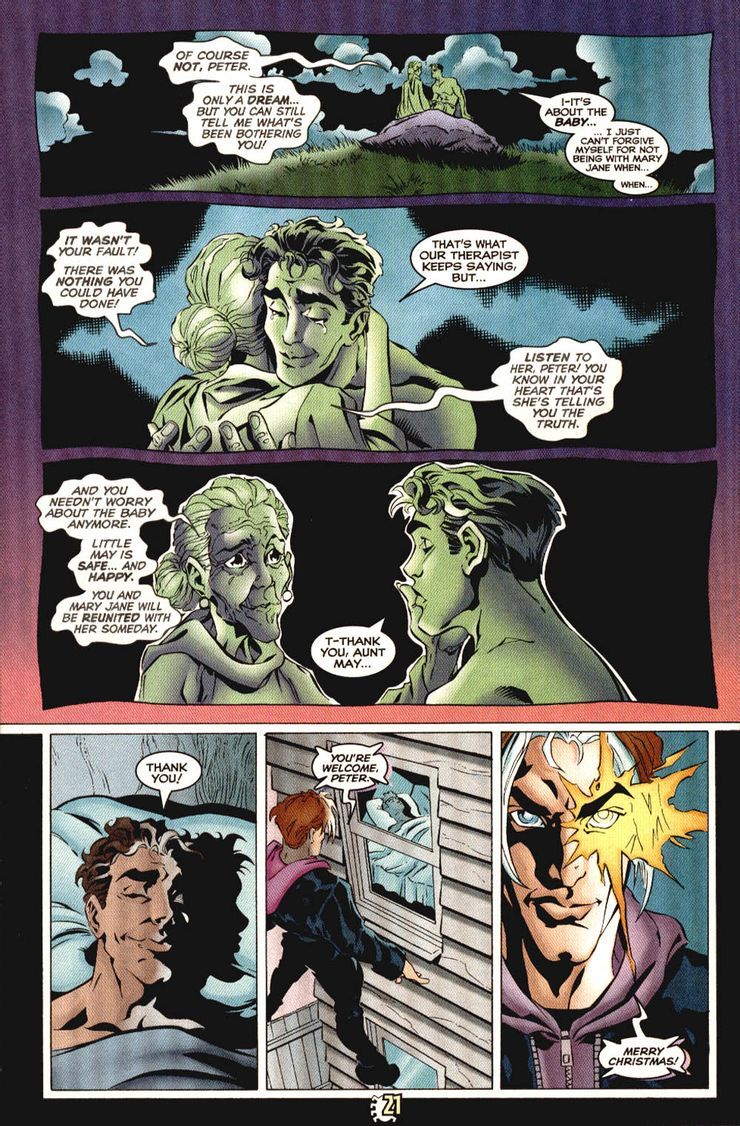 It’s a sweet scene, but I like that DeFalco at least sort of allowed for the slight undercurrent of it being kind of disturbing, too, for this guy who JUST met Peter to be creating a simulation of Peter’s dead Aunt to help him come to terms like this. It’s sort of like some intensive psychotherapy, but being run by just some dude.

At this same time, Terry Kavanagh had Spider-Man guest-star in the pages of X-Man and for a brief period there, Spidey was a quasi-regular guest star in the series (Kavanagh had previously written a long run on Web of Spider-Man), although when Kavanagh left the title, Spider-Man stopped being pals with X-Man and I don’t think anyone remembers their friendship anymore.

As an aside, I just wanted to call attention to the awesome title page that Skroce did for the issue, which otherwise didn’t exactly go over the top in terms of Christmas elements, design-wise… 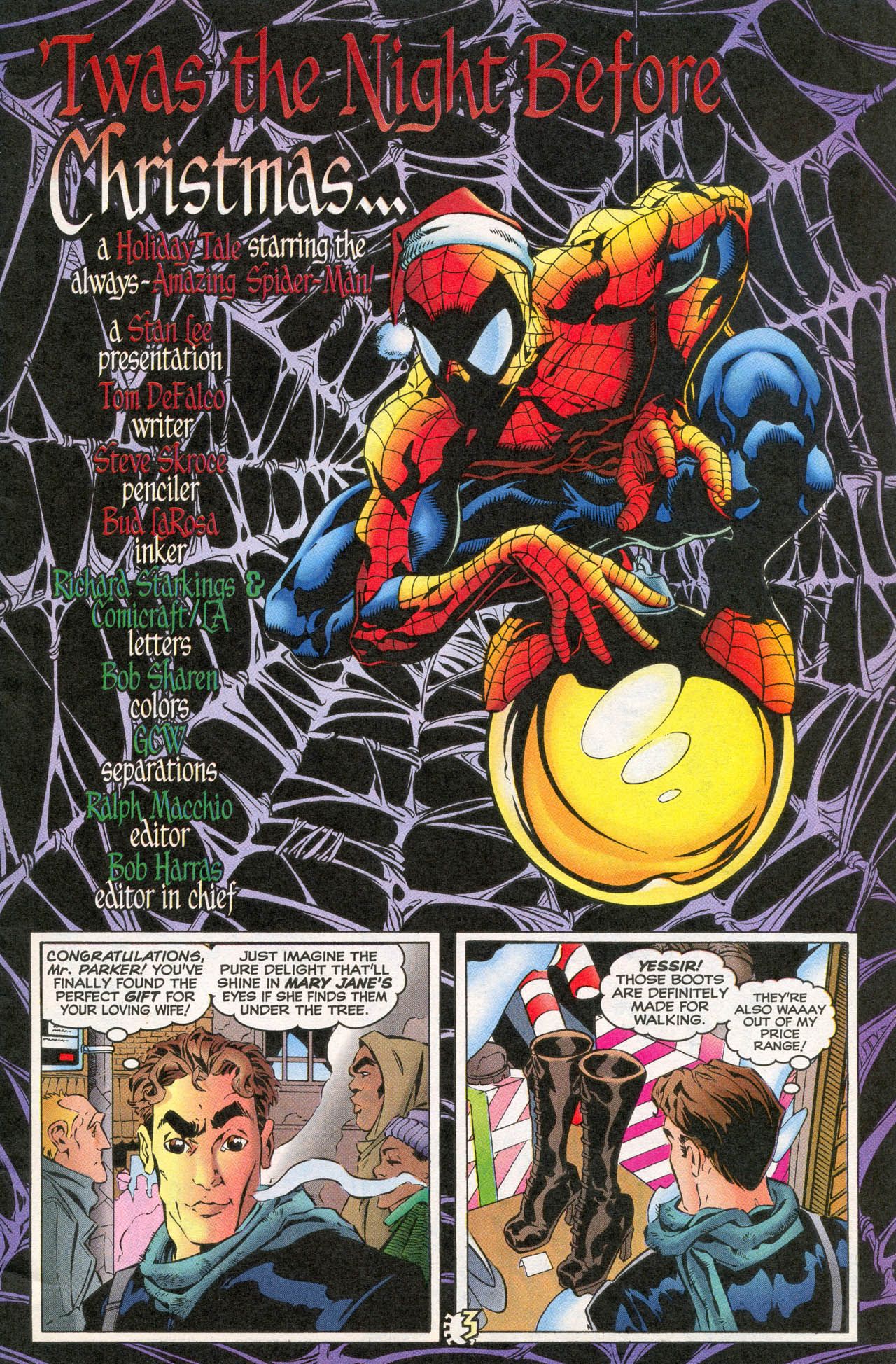 Skroce’s run on Amazing Spider-Man didn’t last that long, and the book would be rebooted entirely in 1999 (DeFalco stuck with it until it ended), with Howard Mackie and John Byrne doing a brand-new #1 (as part of a tie-in to a miniseries by Byrne that revisited Spider-Man’s origins called Chapter One).