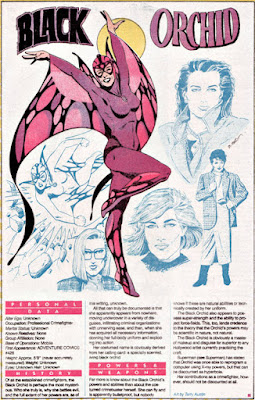 A couple of weeks ago I reviewed the Black Orchid story from Phantom Stranger #36.
The reason behind the review? A 70s fan theory that perhaps Black Orchid was Supergirl in disguise. I have heard in a couple of places that Black Orchid had X-ray powers. And that story was the evidence behind that. She used xrays to reprogram a computer.
I was always a fan of Orchid. The mystery. That great costume. It worked for me whenever I ran across her. Only later when I heard the Supergirl rumor did my interest grow stronger.
As old as I am, I bought the first Who’s Who off the rack as they off the rack as they came out. I loved Black Orchid’s page. Art by Terry Austin! I know Austin as one of the premier inkers in the comic world. But he penciled this!
I love the almost playful pose Orchid is in as it emphasizes the crazy cape she has. And the surprint was supposed always show the character out of costume. So seeing all these different women made sense. Gorgeous.
Did the page bolster or dispute the rumor?

In powers they list flight, invulnerability, and super-strength.
But I thought this passage was worth pointing out.
The X-ray power that was a strong basis for the rumor? Well, Superman saying it can only be discounted as hyperbole. So maybe it didn’t happen … even though we read it in an ‘in continuity’ story.
So next part in this mini side-mission? The comic where Superman says that. Because I think I found it.
Honestly, the more I think about it, I think DC could have side-stepped the ‘death of Supergirl’ in Crisis by making her be Black Orchid for a couple of years, unbeknownst to the readers.
Which Supergirl non-identity do you like her more as ? Black Orchid? Or Sensor Girl?

How Many Batcaves does Batman have? | CBR