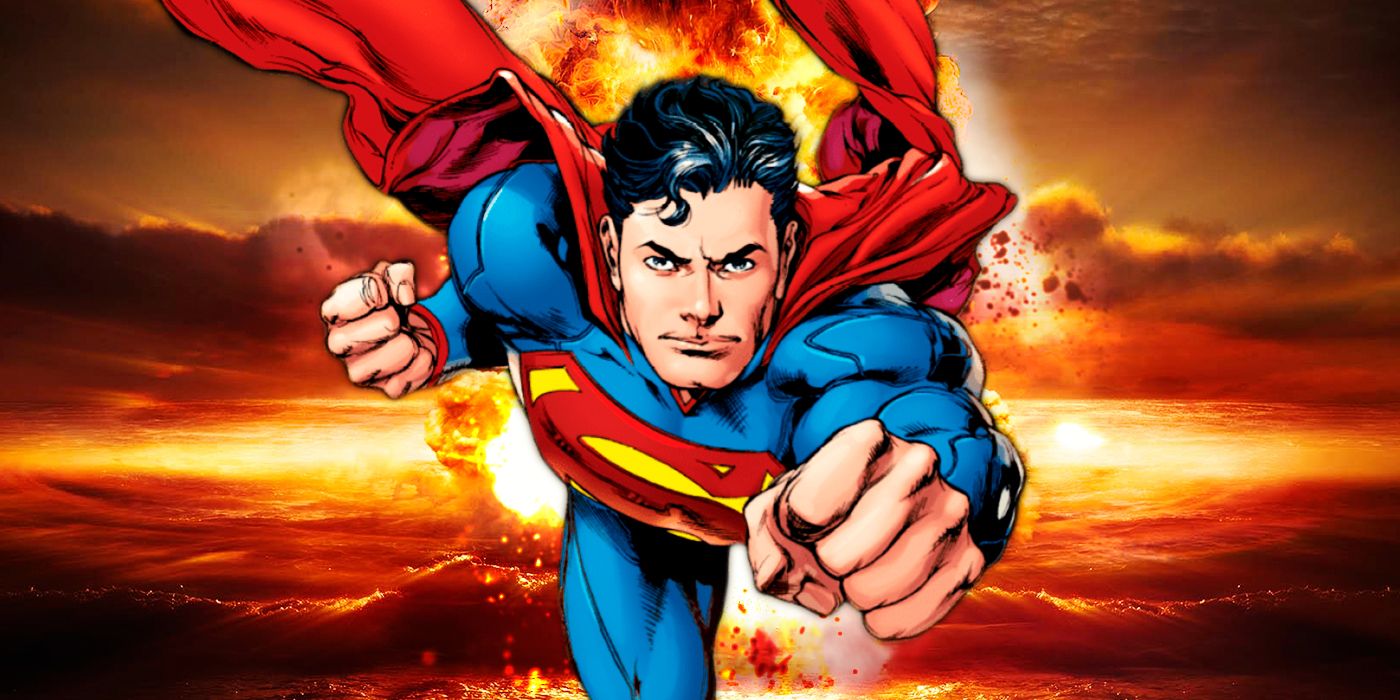 Today, we look at the first time that Superman was able to survive a nuclear explosion.

Years ago, my first book came out, called Was Superman A Spy? And Other Comic Book Legends Revealed. 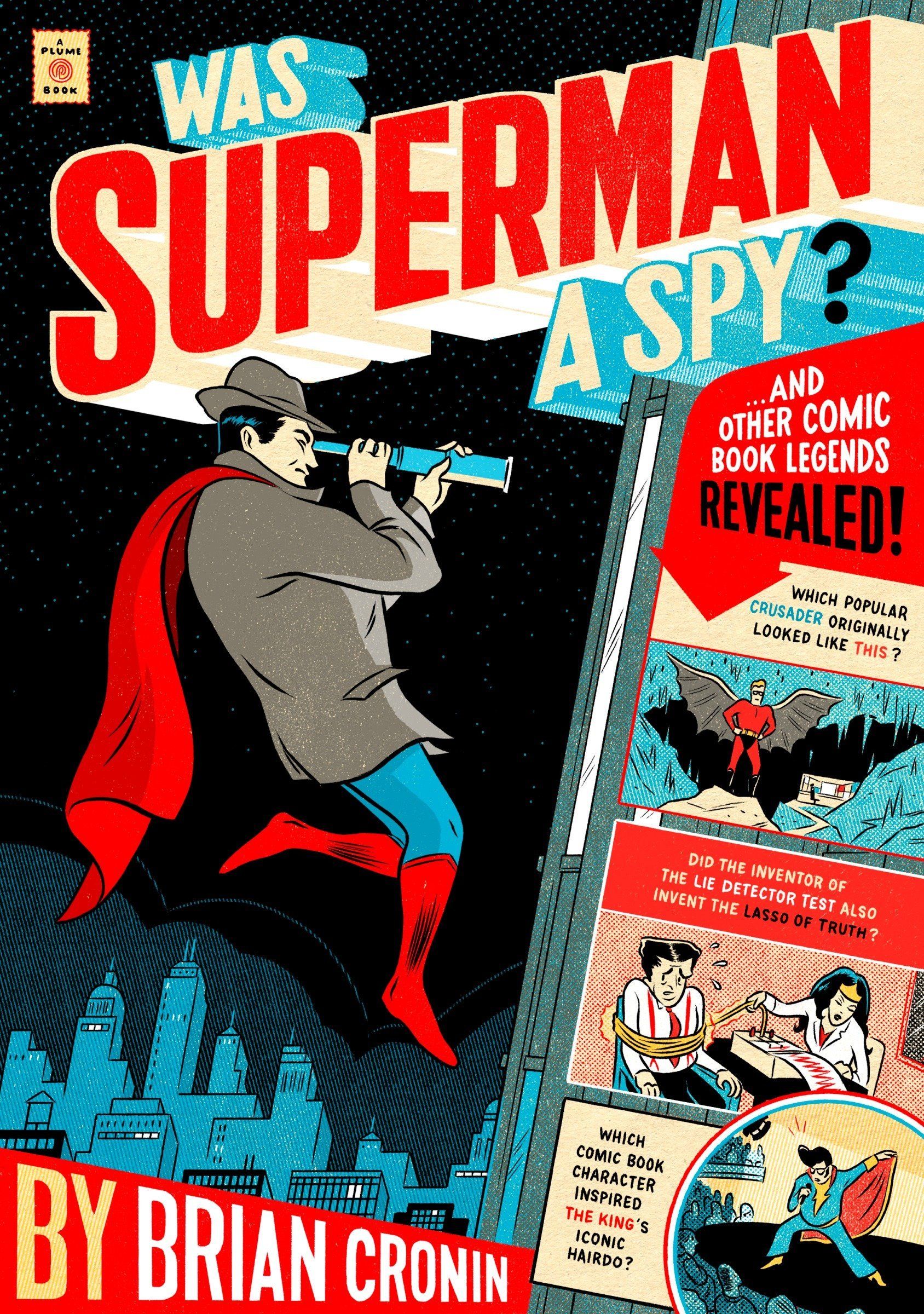 The title of the book referenced how the U.S. War Department was a reference to one of my favorite old Comic Book Legends Revealed columns about how the U.S. War Department took issue with the Superman comic strip having a storyline involving atomic energy, specifically the use of a cyclotron in a series of strips by writer Alvin Schwartz and artist Wayne Boring. However, there was ANOTHER Superman story involving “Atomic bombs” that was ALSO censored by the War Department and that one led reader Jim R. to write in and to ask when Superman comics first started treating nuclear weapons as something that Superman could survive.

It is almost quaint nowadays, but if you look back to Superman’s debut in Action Comics #1 (by Jerry Siegel and Joe Shuster), there is a specific reference to Superman’s abilities and it discusses his invulnerability and notes that nothing short of a burst shell could harm him, which, of course, certainly suggests that a burst shell COULD harm him… 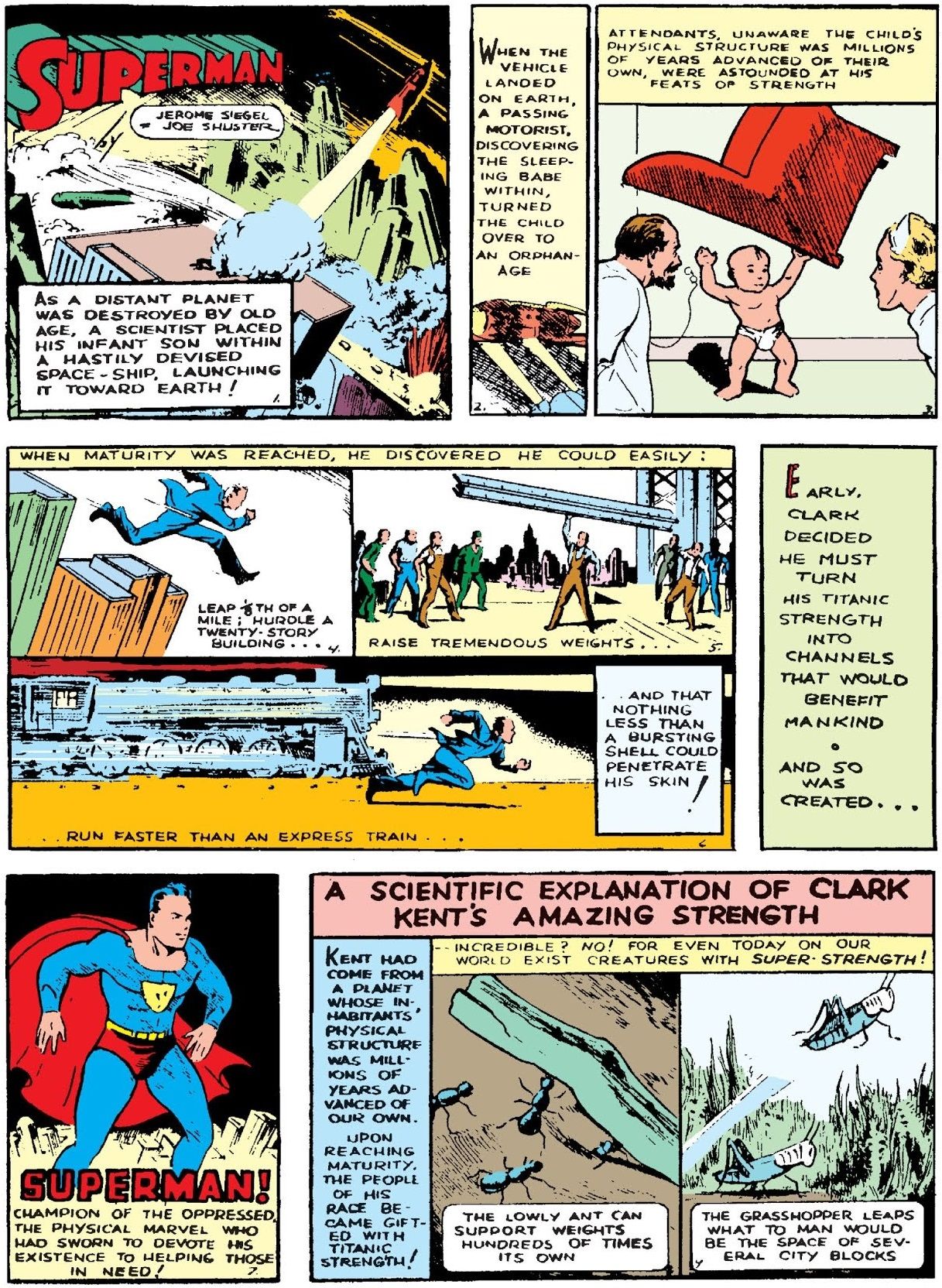 As they say, power creep is a helluva drug and it wouldn’t be long before the notion of an exploding shell doing the Man of Steel in would seem to be preposterous. However, in those early days, Siegel and Shuster clearly weren’t all that clear on what Superman could or could not survive. A particularly amusing example of this occurred in Action Comics #4 where Superman saves a man from being hit by a train (the man’s heart gives out in the process, though, sadly).

The way that Superman is reacting, it sure as heck seems like he thought that the train would have killed him, right? How would THAT be for a slogan, “Superman, okay, he’s nowhere near as powerful as a locomotive. I mean, have you SEEN those things? How can he be expected to be as strong as one of those bad boys!”

However, by Action Comics #35 (by Siegel, Wayne Boring and possibly Leo Nowak), Superman was easily surviving a nitroglycerin explosion and since nitro was used to blow up holes in mountains, that’s saying a whole lot! 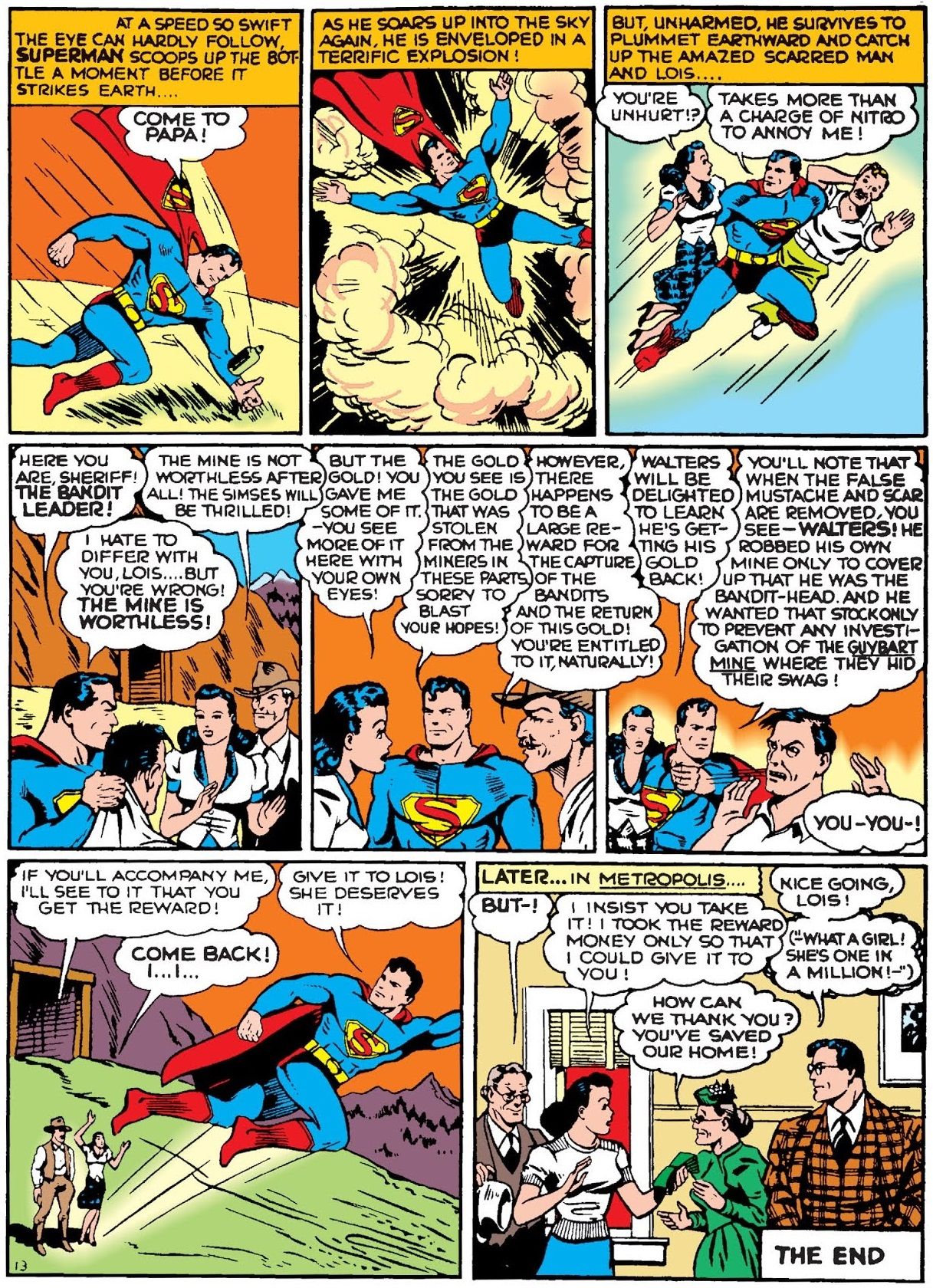 There was a story called “Battle of the Atoms” that was set to be released in an early 1945 issue of Superman (#34, to be precise). The War Department asked them to hold off on the story and so it did not see print until eight months later, well after the United States had used an ACTUAL atomic bomb on Japan (TWICE).

The problem that the War Department had at the time was that they would periodically check in on what the big comic book companies were up to, but they really didn’t think it was worth their effort, so they were continually trying to push for the companies to just self-report sketchy stuff like any discussion about atomic energy.

What’s hilarious, of course, is that the actual story (by Don Cameron, Pete Riss and George Roussos), was not even really remotely connected to actual atomic energy.

The splash page references the conflict (and it is funny to see the comic book story actually bragging about the fact that it was censored, as if it were a mark of pride to be censored by the government during the war)… 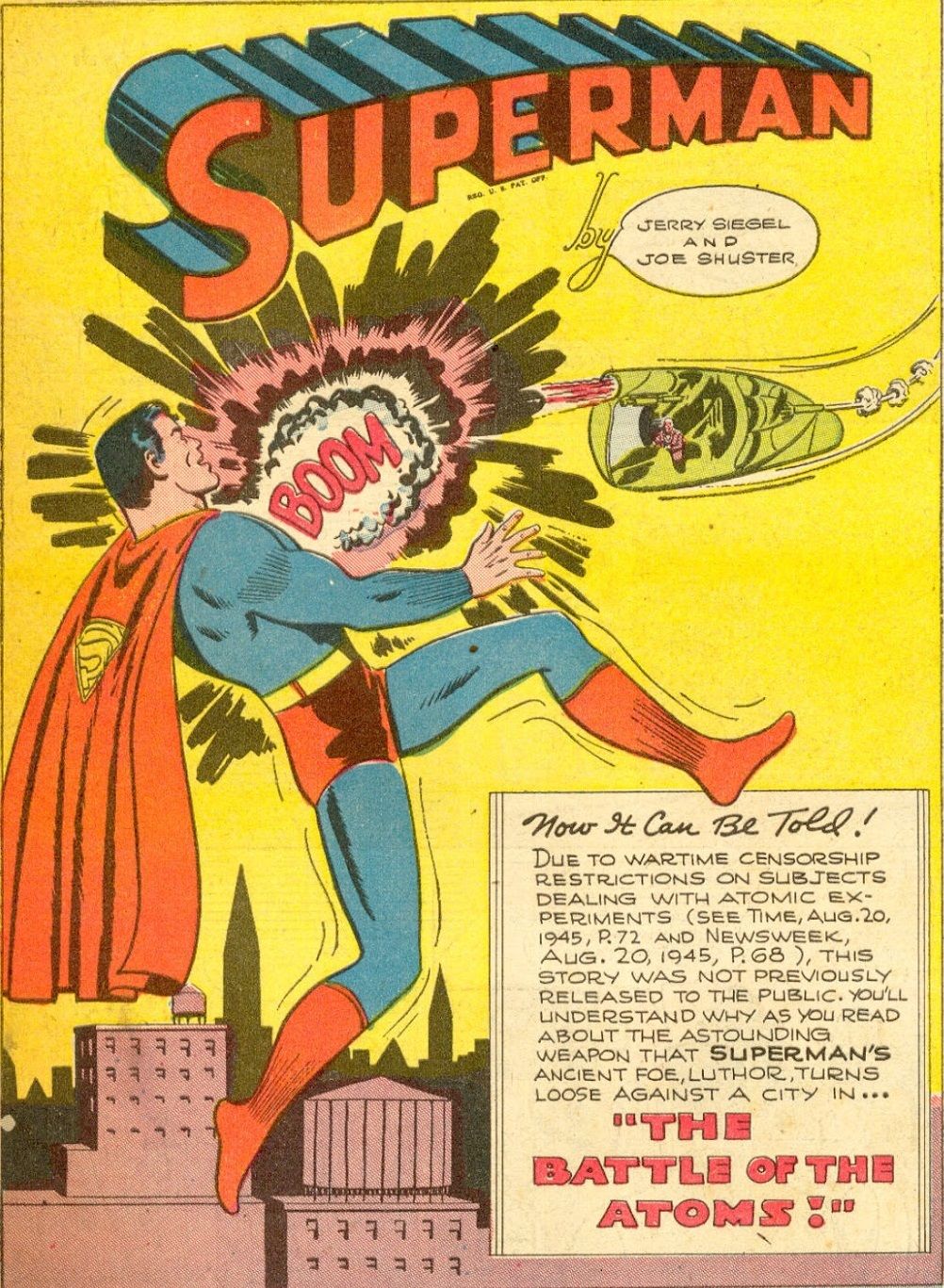 But the story is really just about Luthor doing some experiments when Lois Lane and Clark Kent happen upon his lab. Honestly, a lot of the story involved the rivalry between Lois Lane and Clark Kent, as they were vying for the story of what was going on in the laboratory and Luthor, naturally, did not want them to get involved there at all, so he sends some goons after them, but Superman interrupts them and saves Lois (and Clark, of course, but Clark isn’t there when she is saved). Luthor freaks out, and decides to fly to the Daily Planet and destroy it before Lois can write about what she saw in his lab.

Superman, naturally, intercepts Luthor on the way to the Daily Planet and they have a pretty cool aerial battle, but the whole thing is just over the top and not realistic at all. I don’t mean that in a negative way, though. It’s a cool story, but it just isn’t anything based in reality. It’s just an over-the-top super-battle between Superman and Luthor’s ship.

Finally, though, when Luthor meets Superman head on, Luthor then throws an “atomic bomb” at Superman to no avail… 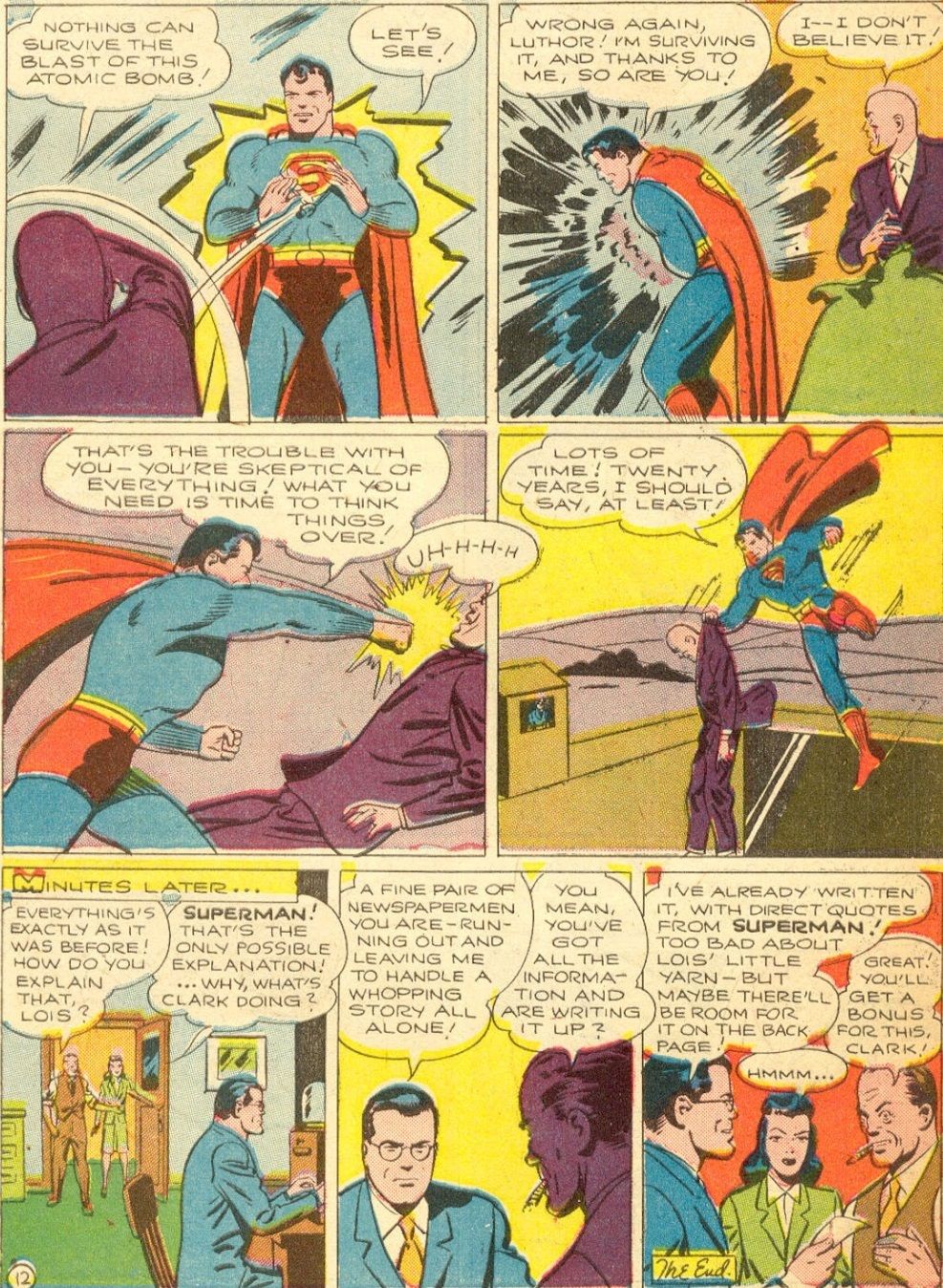 And that, of course, is the problem with the story from the perspective of the United States government. The War Department’s concern back in those days was more that they didn’t want people to think atomic bombs or atomic energy were silly, comic book-esque topics. So they took out any mention of atomic bombs in comics, even when the atomic bombs were silly stuff like in this comic book. Once the actual bombs were dropped in Japan, though, there was no longer any fear of that anymore, so the restrictions were lifted.

There were some other restrictions coming regarding atomic energy, but in general, it was much more open than before.

RELATED: How Did the Argument That Batman Brings Villains to Gotham City Begin?

This leads us to August 1946‘s Action Comics #101 (by Jerry Siegel, Win Mortimer and George Roussos), where Superman was under the influence of a drug that made him act berserk, but he was knocked back to his senses by being caught in an atomic bomb explosion… 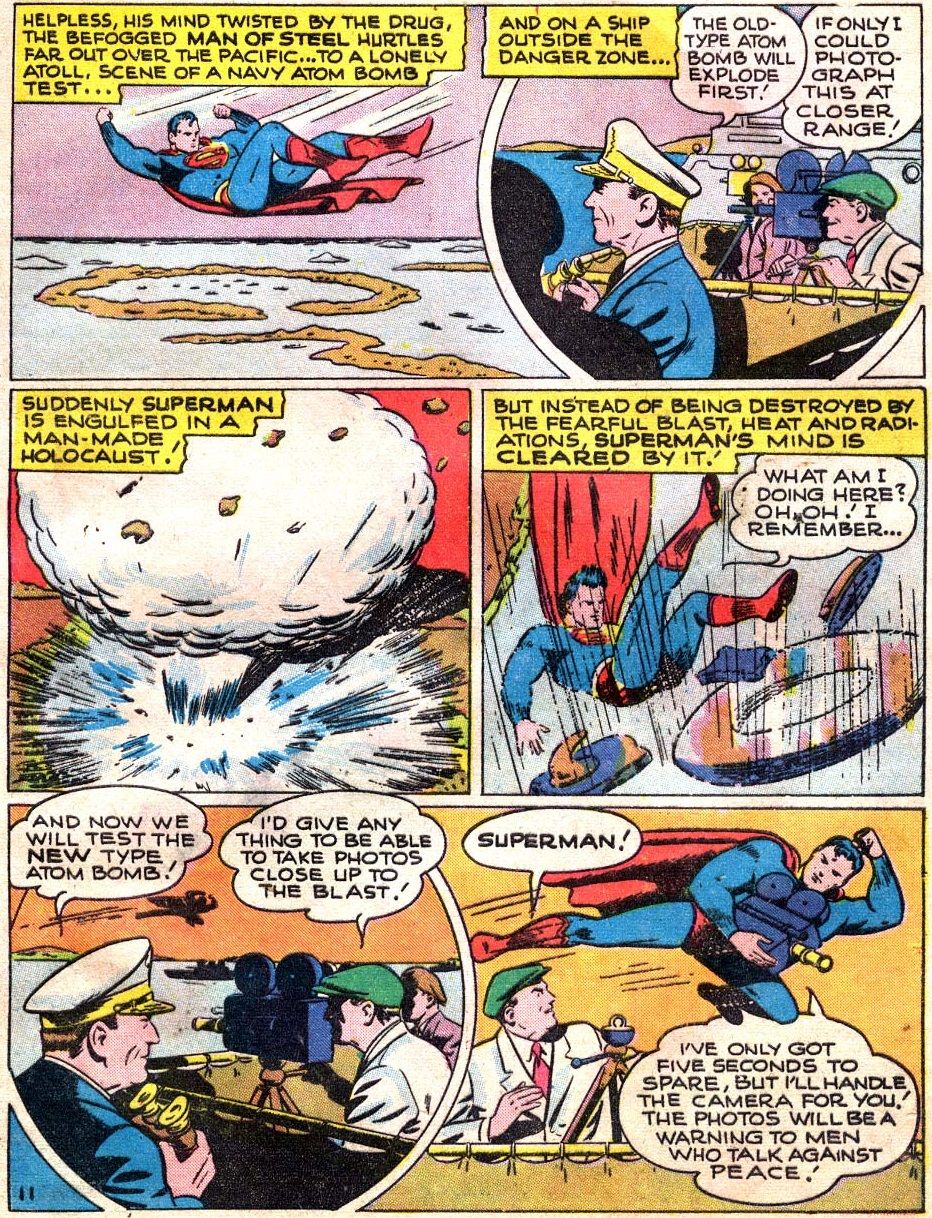 He then films the explosion of the NEWER atomic bomb… 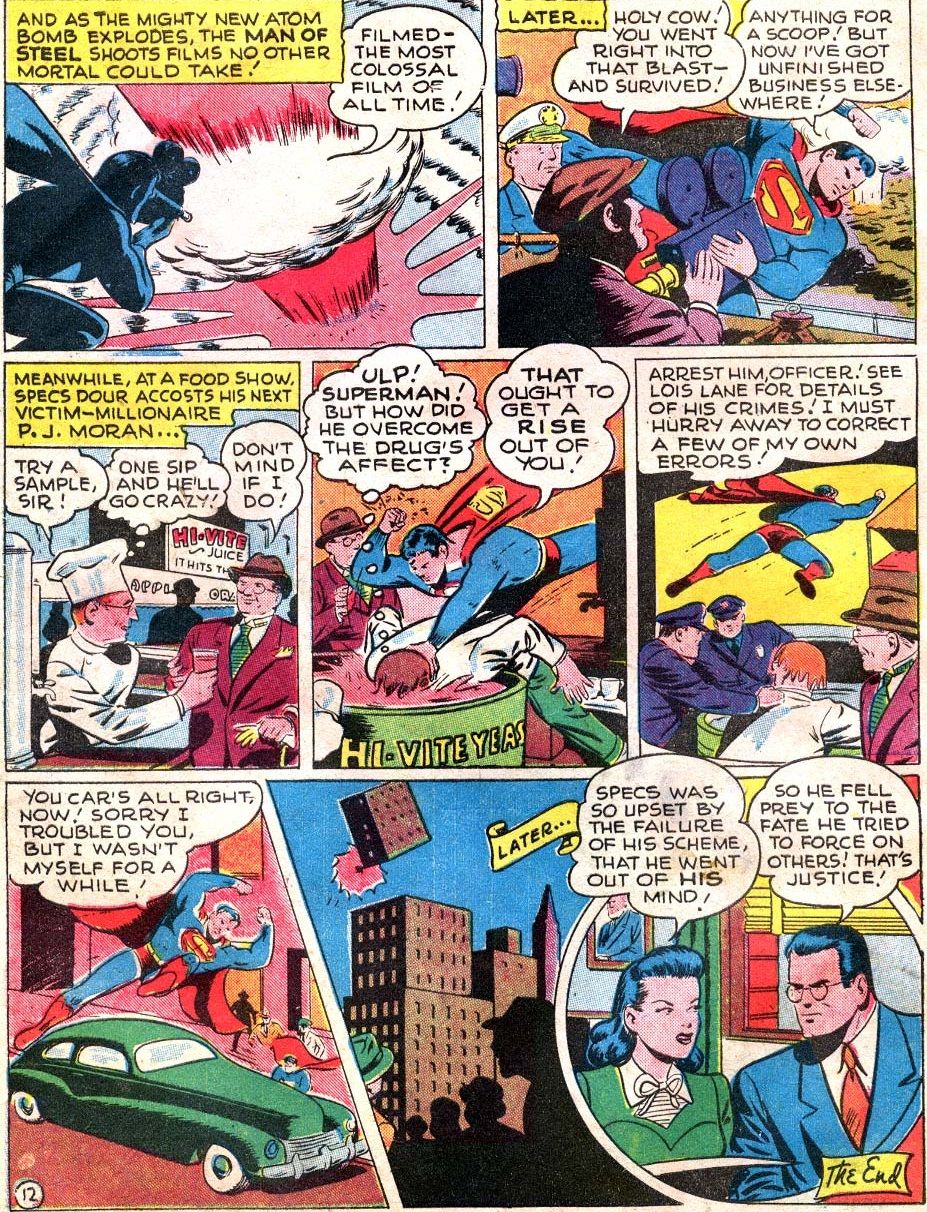 So there ya go, Jim, that’s the first time that Superman easily survived a nuclear explosion!

Thanks to Jim for the suggestion and if anyone else has a suggestion for a notable comic book first that they’d like to see me write about, drop me a line at brianc@cbr.com!

KEEP READING: When Did Superman Save a Villain from Death for the First Time?

Ghosts of the Ozarks: Smallville’s Phil Morris on What Drew Him to the Role