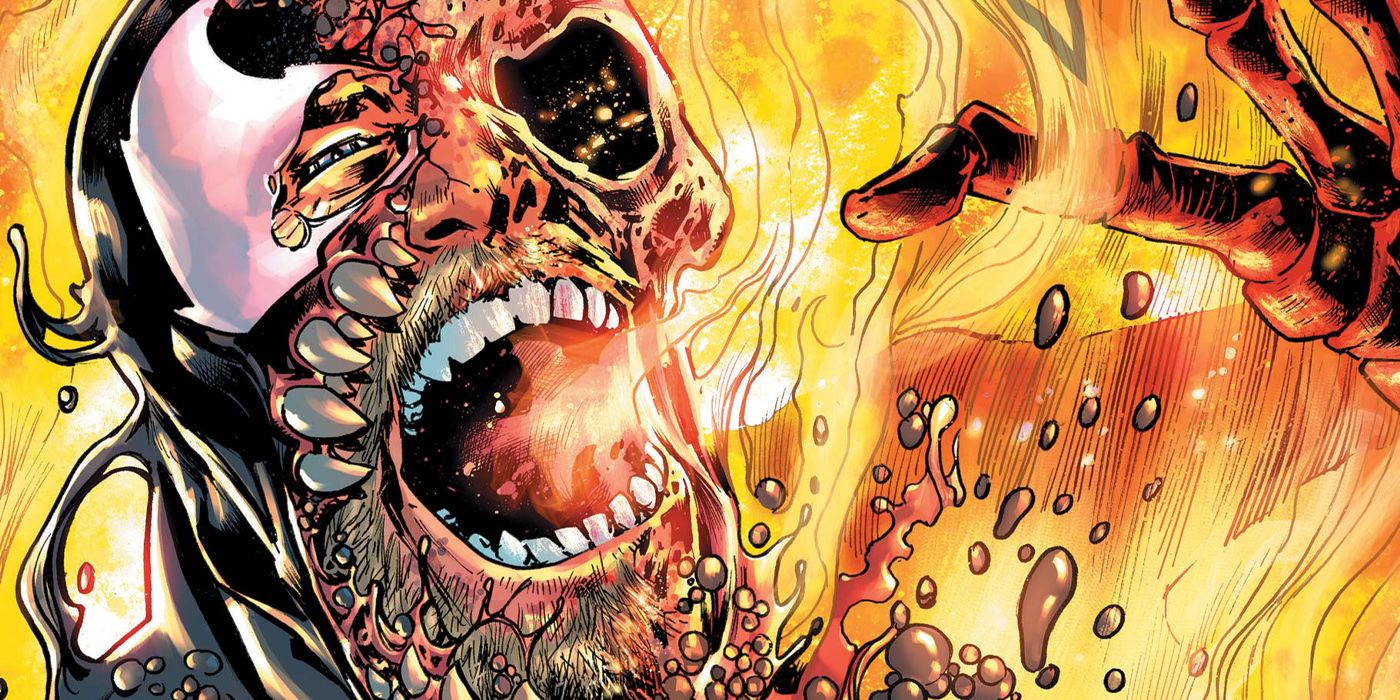 The first issue of the recent Venom relaunch left readers with many questions, and a preview for the next issue hints that there may be an underlying evil to the heroic symbiote.

The previous Venom run was helmed by writer Donny Cates from 2018 until 2021, and featured art predominantly by Ryan Stegman for the series and events like Absolute Carnage and The King in Black. Under the creative team, Eddie Brock went from an isolated loner battling his inner demons to a father and ruling god over the symbiote race, the Klyntar. With a new creative team–writers Al Ewing, Ram V. and artist Bryan Hitch–at the helm, the Marvel Universe’s new Venom, Dylan Brock, is on his own with no one he can trust, including the symbiote he is bonded to.

The previous issue featured the apparent death of Eddie Brock, or at least his physical body, since his conscious mind appears to have spiraled to another place in time. This also is not the first time that Eddie has died recently. In The King in Black #2, Eddie flatlines, with Venom #32 revealing that his mind had become a part of the symbiotes’ hive mind. Now that Eddie is the King in Black after defeating the former symbiote god Knull, he can control the hive mind and transfer his consciousness to multiple symbiotes at once, as revealed in Venom #200.

However, Eddie is still unable to be physically present with his son, Dylan, who bonded with the Venom symbiote after seeing his father die in the explosion, fighting dozens of soldiers seemingly responsible. The Venom symbiote appears to be acting strange in the preview though. After 35 issues explored his close connection and relationship to Eddie, the preview features dialogue from the symbiote that is rather blunt towards its former host, saying that Eddie is now “nothin’ but dust ‘n’ bones.”

Of course, the sequence does take place within Dylan’s dreams, who may not be remembering the incident as accurately. A rule that he had with Eddie though was that he would not bond with the symbiote or get into any trouble, which he broke after multiple Eddie Brocks contacted him and one died, forcing him to run away and be by himself. Yet, the preview implies that Eddie was not just setting a rule with Dylan, but warning him against the symbiote itself. The preview and solicitation for the issue can be found below. 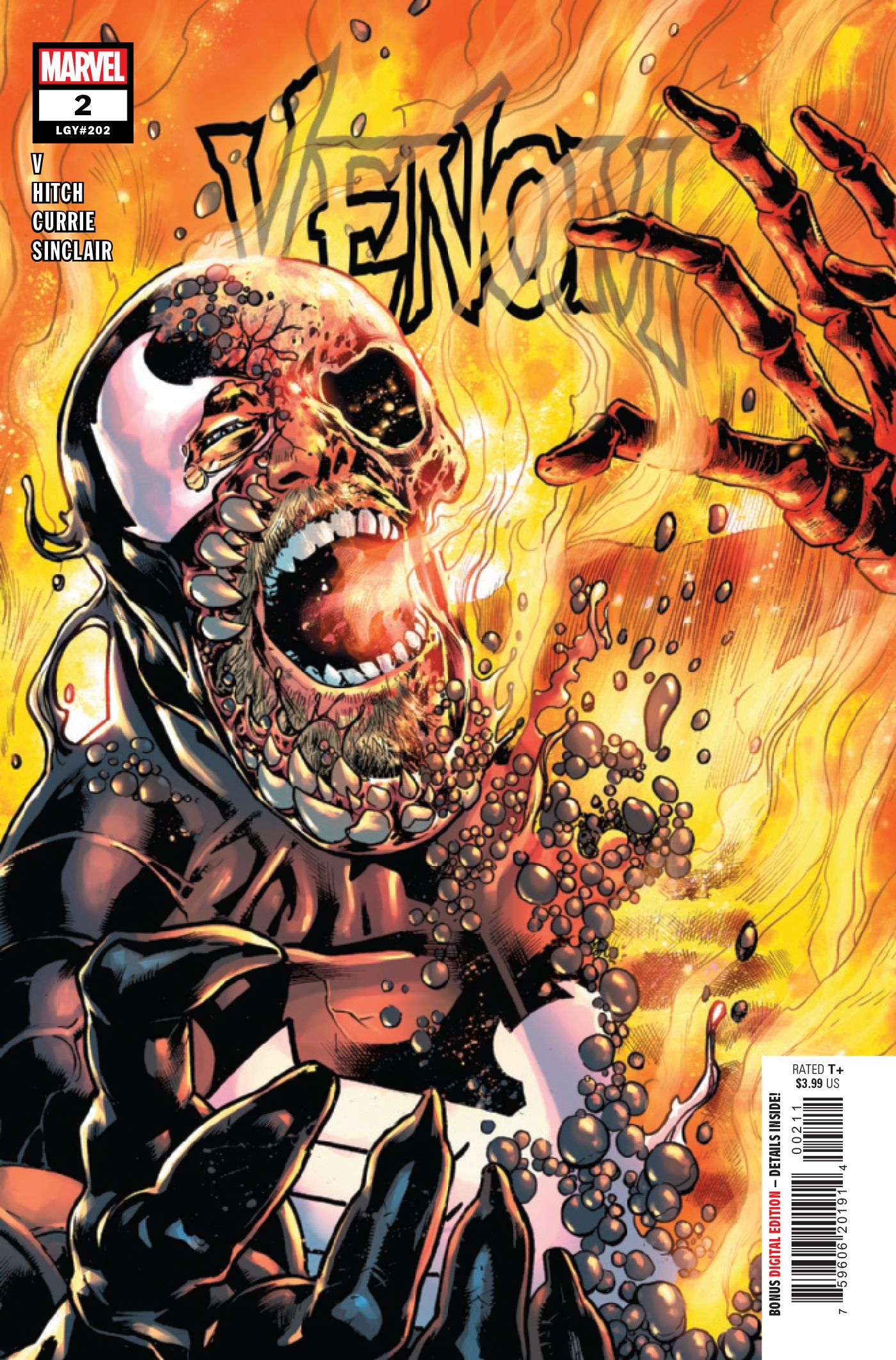 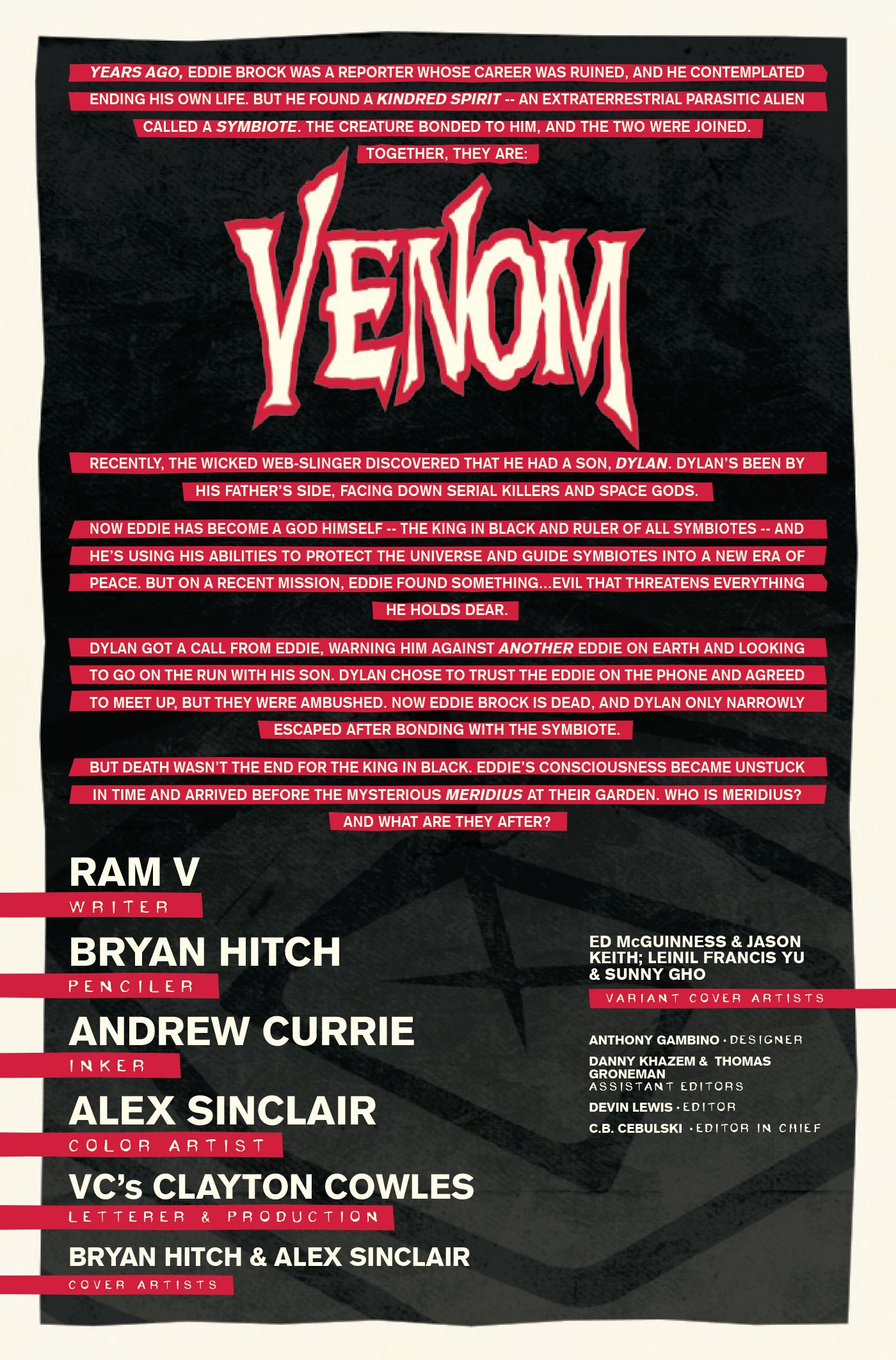 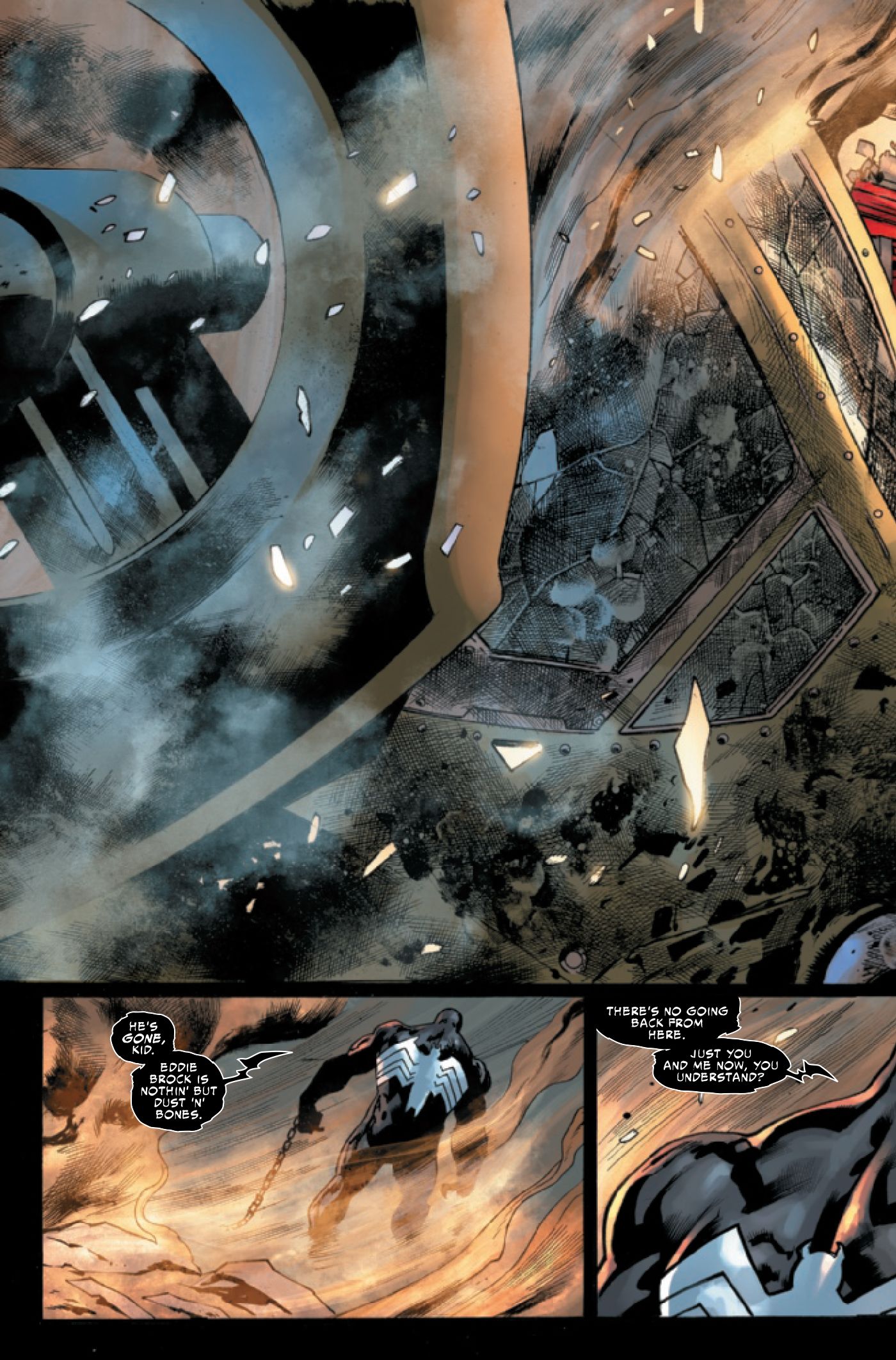 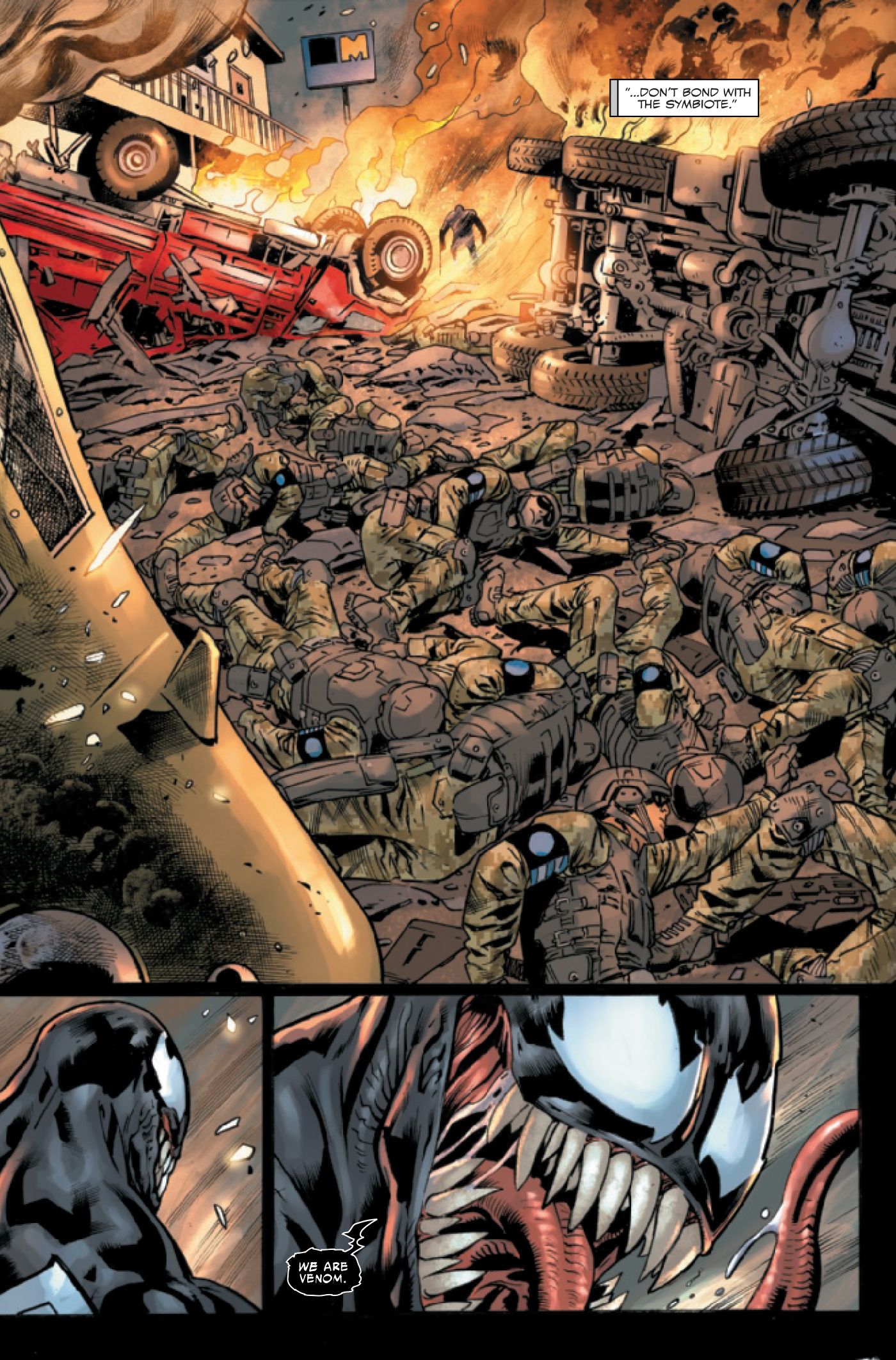 Venom #2 is written by Ram V. with pencils by Hitch, inks by Andrew Currie, colors by Alex Sinclair, letters by VC’s Clayton Cowles and cover art by Hitch and Sinclair. Variant covers for the issue were created by Ed McGuiness, Jason Keith, Leinil Francis Yu and Sunny Gho. The issue goes on sale Dec. 1 from Marvel Comics.

The Witcher’s Henry Cavill and Joey Batey Discuss Their Love of Warhammer 40,000

The Late Brian Augustyn Was an Unsung Architect of ‘90s DC