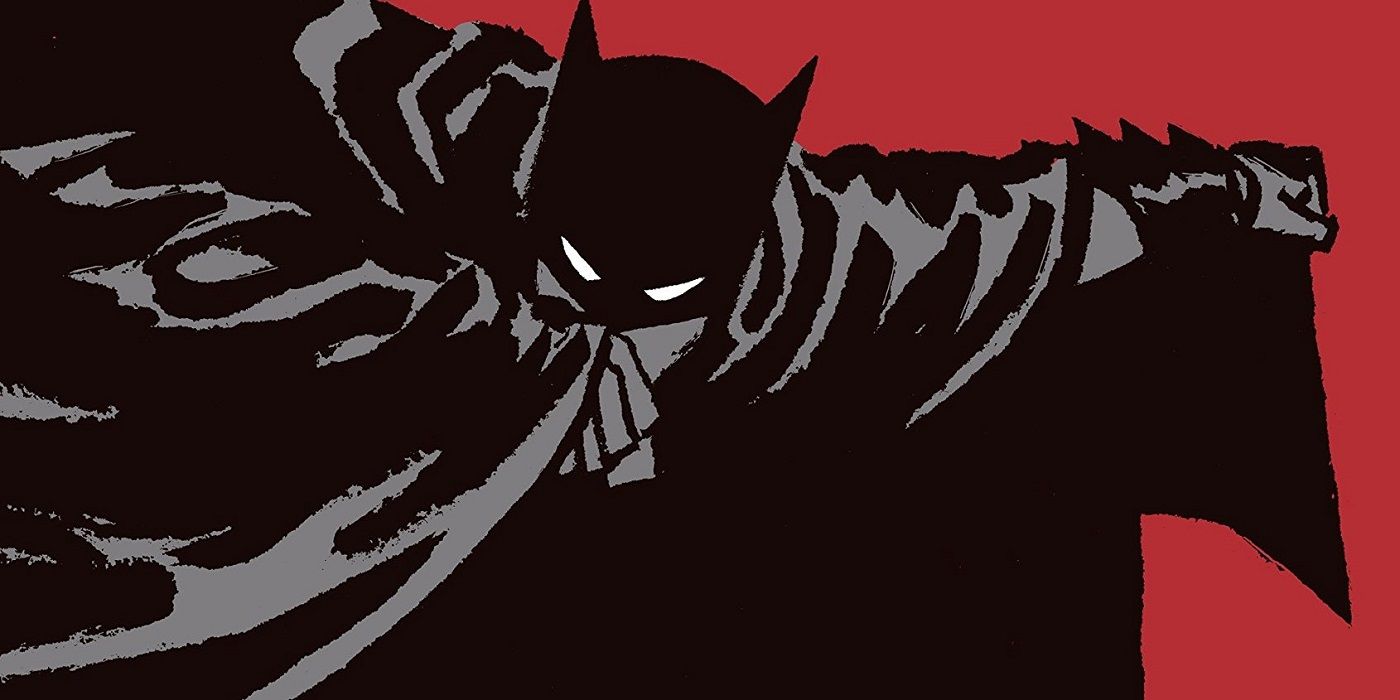 Today, we continue our countdown of your picks for the greatest comic book storylines of all-time with #6-4.

All Star Superman is both a reimagination of Superman as well as a bit of a farewell to the character. The story is basically about the death of Superman, as his death is foretold in the first issue and the comic depicts the last year in the life of Superman.

During that year, Superman has to complete twelve trials before he dies. As he completes the trials, Morrison and Quitely deliver brilliant new approaches to classic Superman plots.

Look at the detail in this sequence from #1, where we see Quitely’s stunning depiction of how Clark Kent can make himself look differently (while we also see the casual heroics of Clark)…. 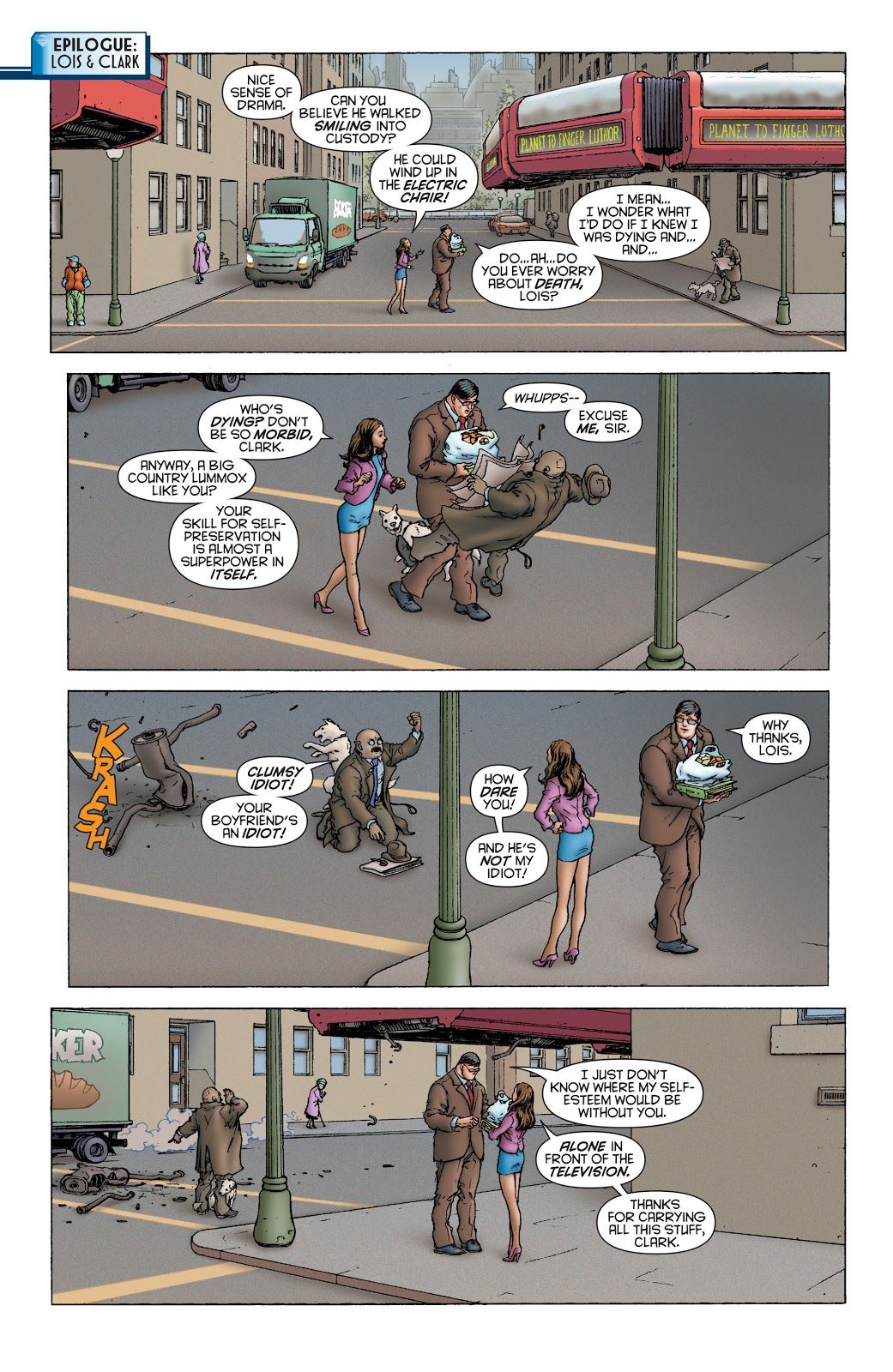 and he slowly changes his posture until he is Superman… 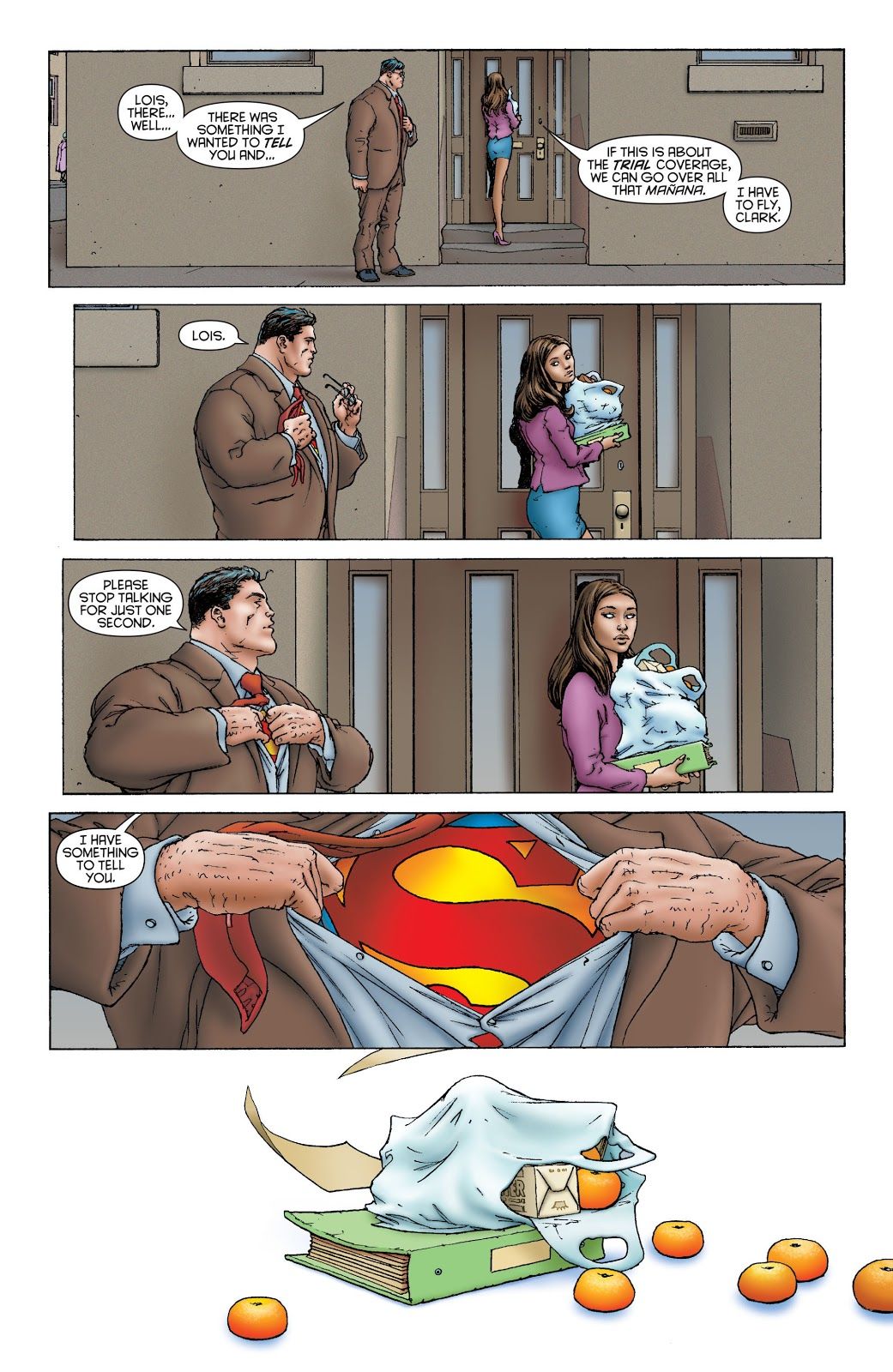 Possibly one of the coolest aspects of All Star Superman is that it is not, in the least bit, cynical. It’s quite a feat to see a re-envisioning of Superman that does NOT involve some sort of post-ironic cynical approach to the character.

In addition, the story was told with a series of (mostly) one-off issues, so each issue was like its own little epic, they just combine to tell one long story of Superman’s last year of life.

Morrison’s take on Superman and his supporting cast is innovative while completely familiar, and Quitely, well, Quitely just goes out of his mind with some of the layouts and dynamism in this series. Really top notch stuff.

Like when Superman gives Lois Lane superpowers for a day… 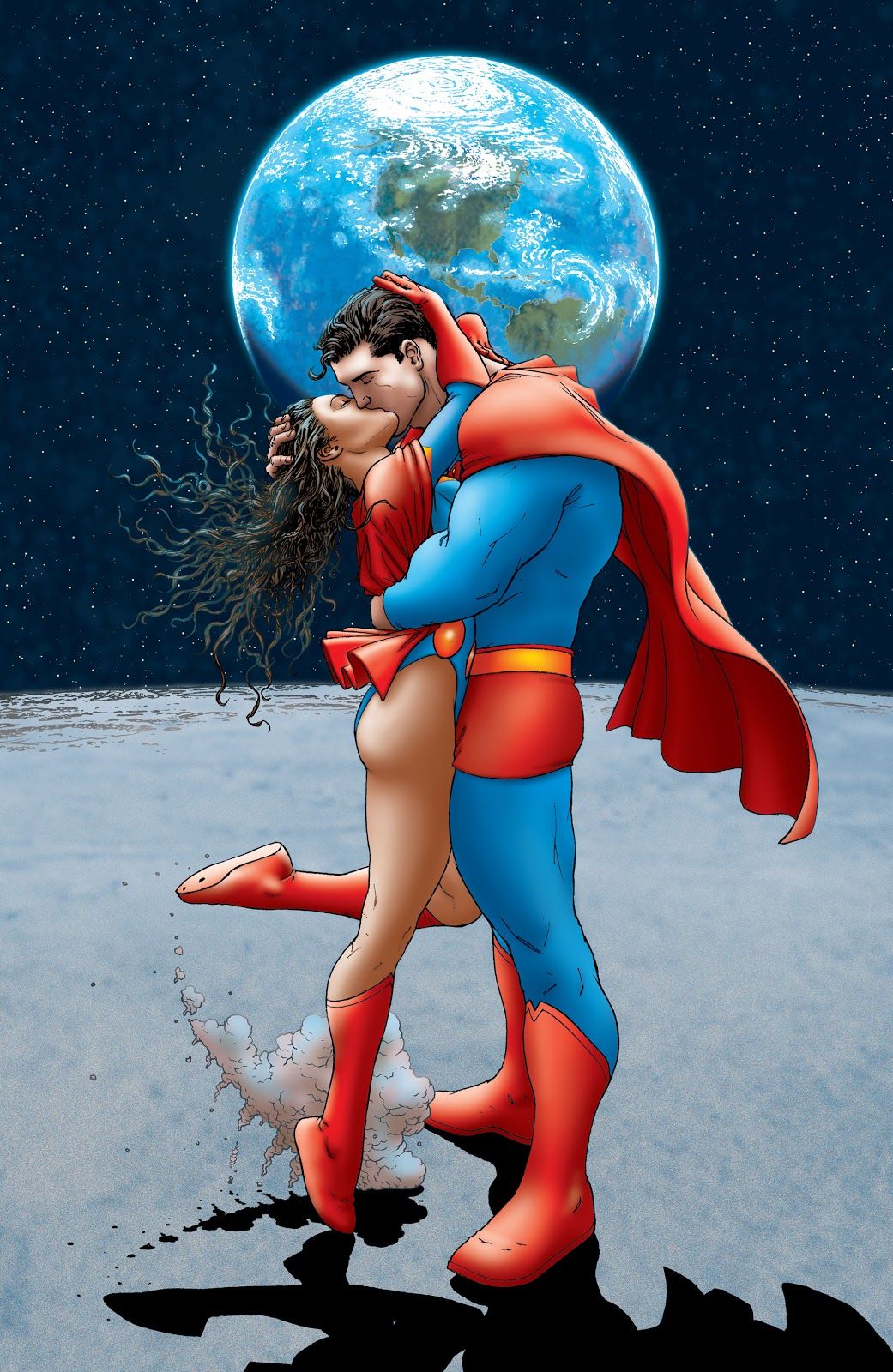 But there’s just too many memorable moments to mention, like Superman interrupting a battle to help a young woman who is struggling with a desire to end things or the classic fifth issue, wwhere Clark Kent interviews Lex Luthor during the middle of a prison riot. One of the greatest Luthor spotlight issues in history, including the innovation Morrison came up with that Luthor’s eyebrows are missing, too, so he just draws on crooked eyebrows!

It’s a stunning collection of stories that all build to a powerful ending.

Whatever aspects of the Batman character weren’t already re-defined by Frank Miller in his Dark Knight Returns series were done so with this landmark new origin for Batman, courtesy of writer Frank Miller and artist David Mazzucchelli.

The story tells the tale of Bruce Wayne and James Gordon, and how one man became Batman and the other became the symbol of honest cops in Gotham City (Harvey Dent also plays an important role, but Batman and Gordon’s stories are the main ones in the story).

Originally, Bruce tried to be a vigilante without a costume. It did not go well. He barely gets home alive and that’s when a new idea comes to him – to become a BAT!

That this story was the basis for the blockbuster film, Batman Begins, is of no surprise, since Miller writes the story in a totally cinematic style, and Mazzucchelli’s brilliant artwork certainly has a cinematic style to it, as well.

This is especially evident in the way that Miller uses the passage of time via calendars. Check it out in this legendary sequence from the second issue of the story, as Jim Gordon tries to get extra support to take down Batman but his superiors ignored him… 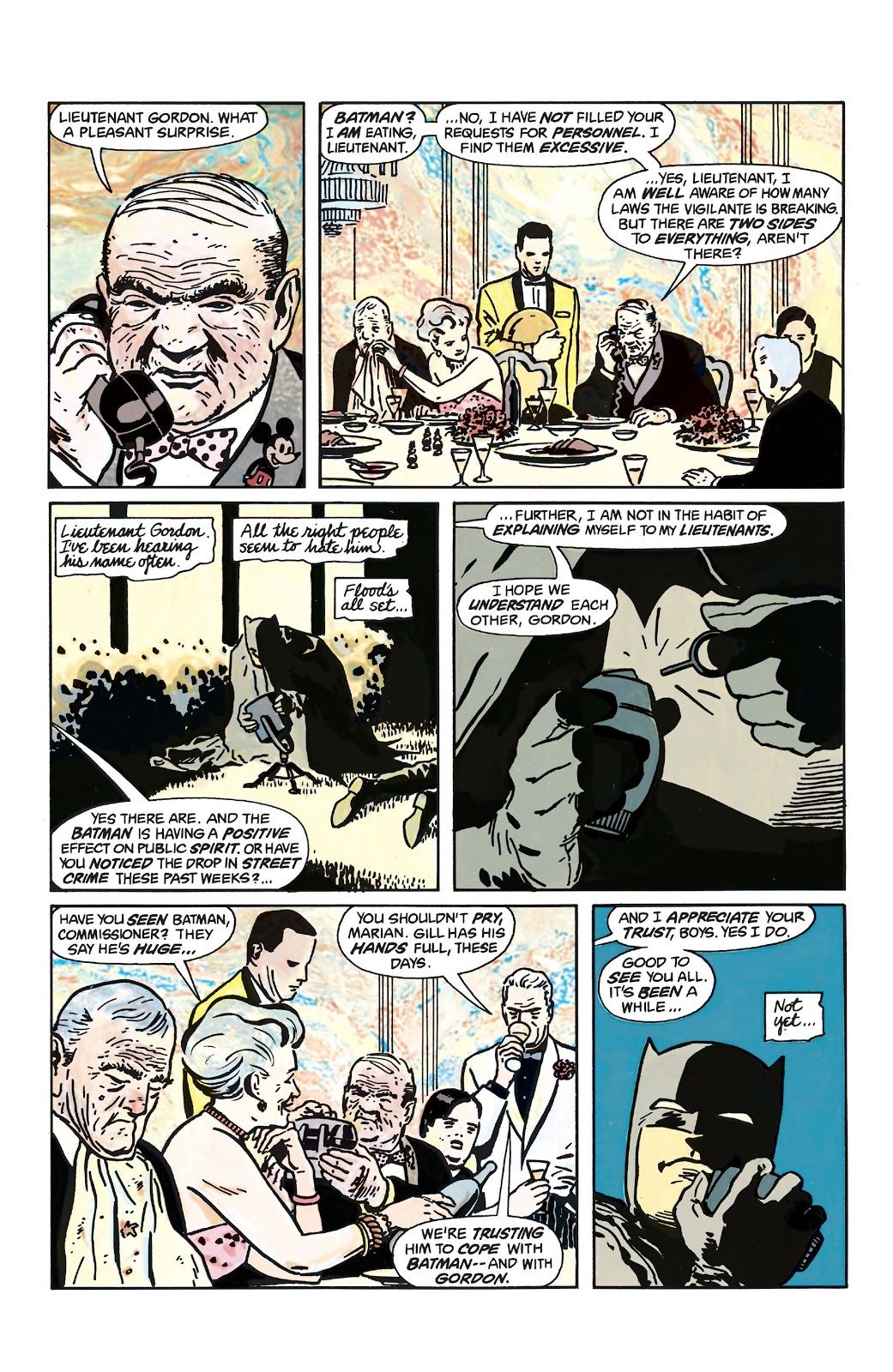 until Batman served notice on the corrupt leaders of Gotham… 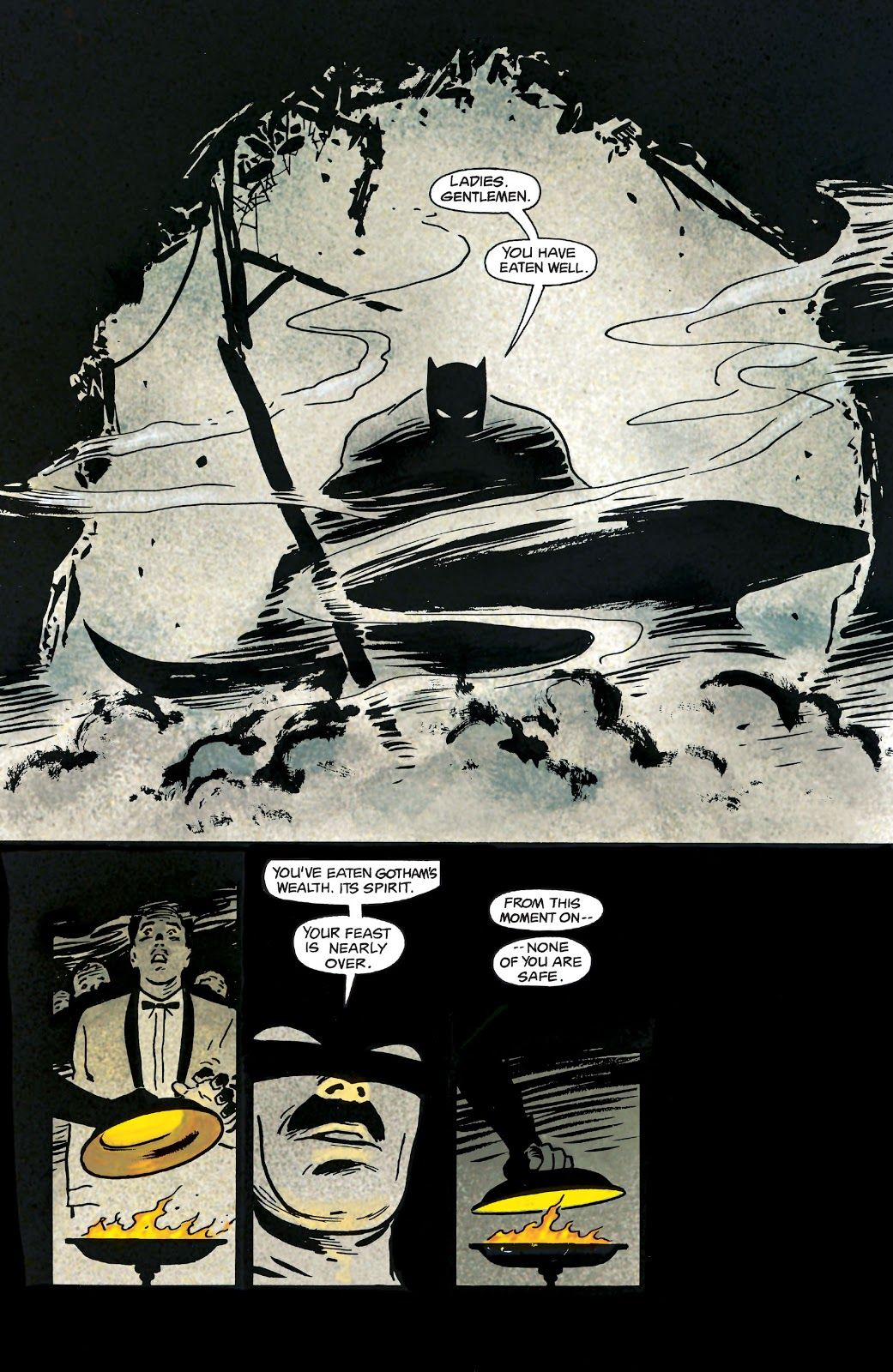 and then suddenly everything was different… 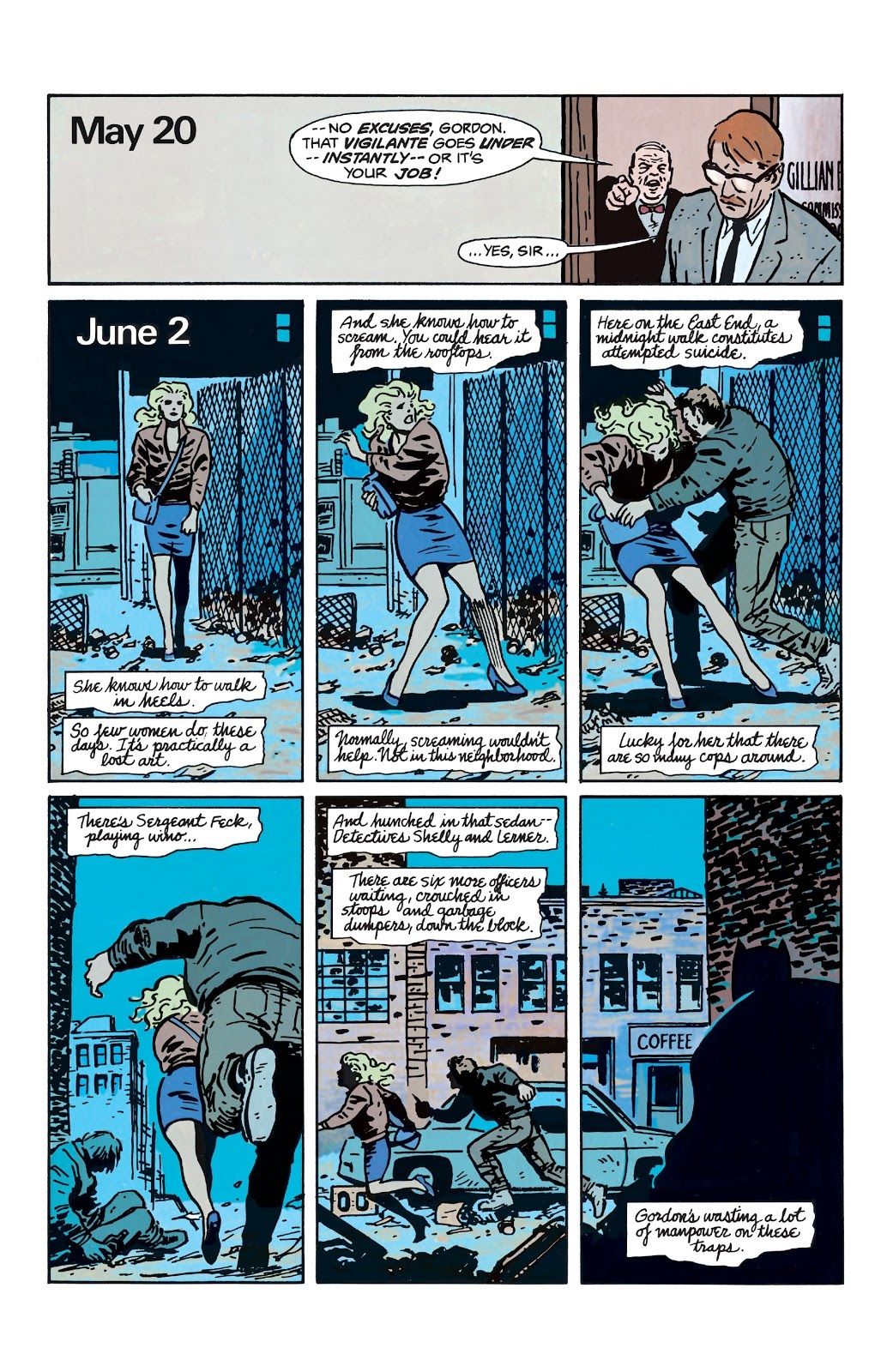 What a great use of the passage of time.

Perhaps the most impressive aspect of the comic is just how strong of a character Jim Gordon is in it. He truly works as the co-lead of the story. While writers certainly had done solo Gordon stories before this storyline, never had he gotten the attention Miller gave him, and a result, Gordon HAS had the same attention since.

Richmond Lewis’ colors should get some attention – she does a marvelous job setting the mood. Very evocative washes.

Add it all together and you have an engaging and entertaining new origin for Batman as we see him go from green vigilante to a trusted friend of the Gotham City police (as the police also go from being totally corrupt to only being significantly corrupt – a major step up!).

The last few issues of the Dark Phoenix Saga, where Phoenix actually BECOMES Dark Phoenix, almost overshadow the importance of the issues that lead up to Phoenix turning evil.

To wit, those issues (which actually were a bit of a cause for celebration for the X-Men, as they were finally reunited after being split up for a year or so – real time – as Jean Grey and Professor X thought that the rest of the team had died after a battle with Magneto) introduced the following characters:

The Hellfire Club, in general

Think about that – Kitty Pryde and Emma Frost are two of the more memorable additions to the X-Men since Giant Size X-Men #1, and they BOTH debuted in this storyline! 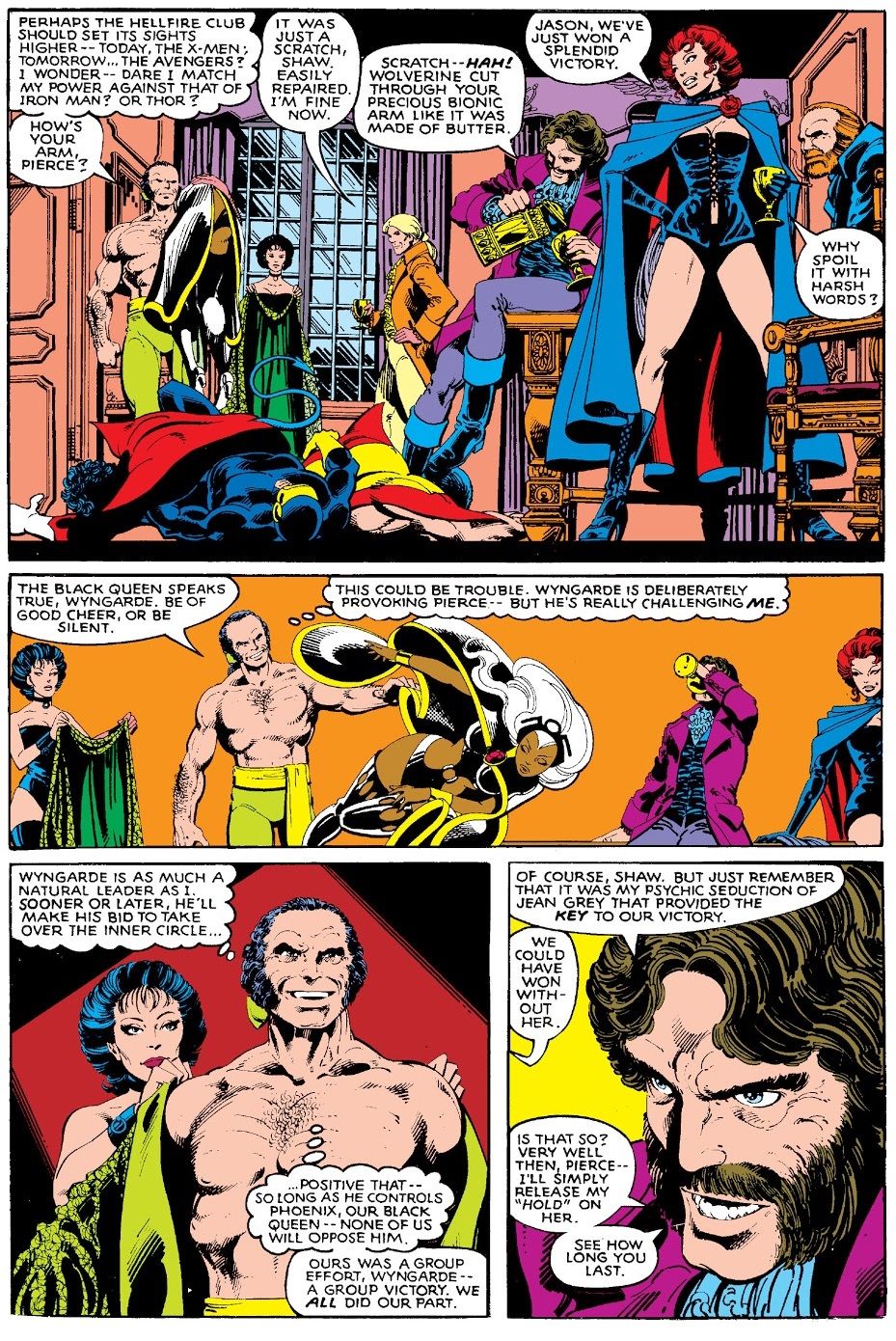 only for Wolverine to turn up at the end of #132 vowing revenge, in a panel is one of the most iconic panels in Marvel History… 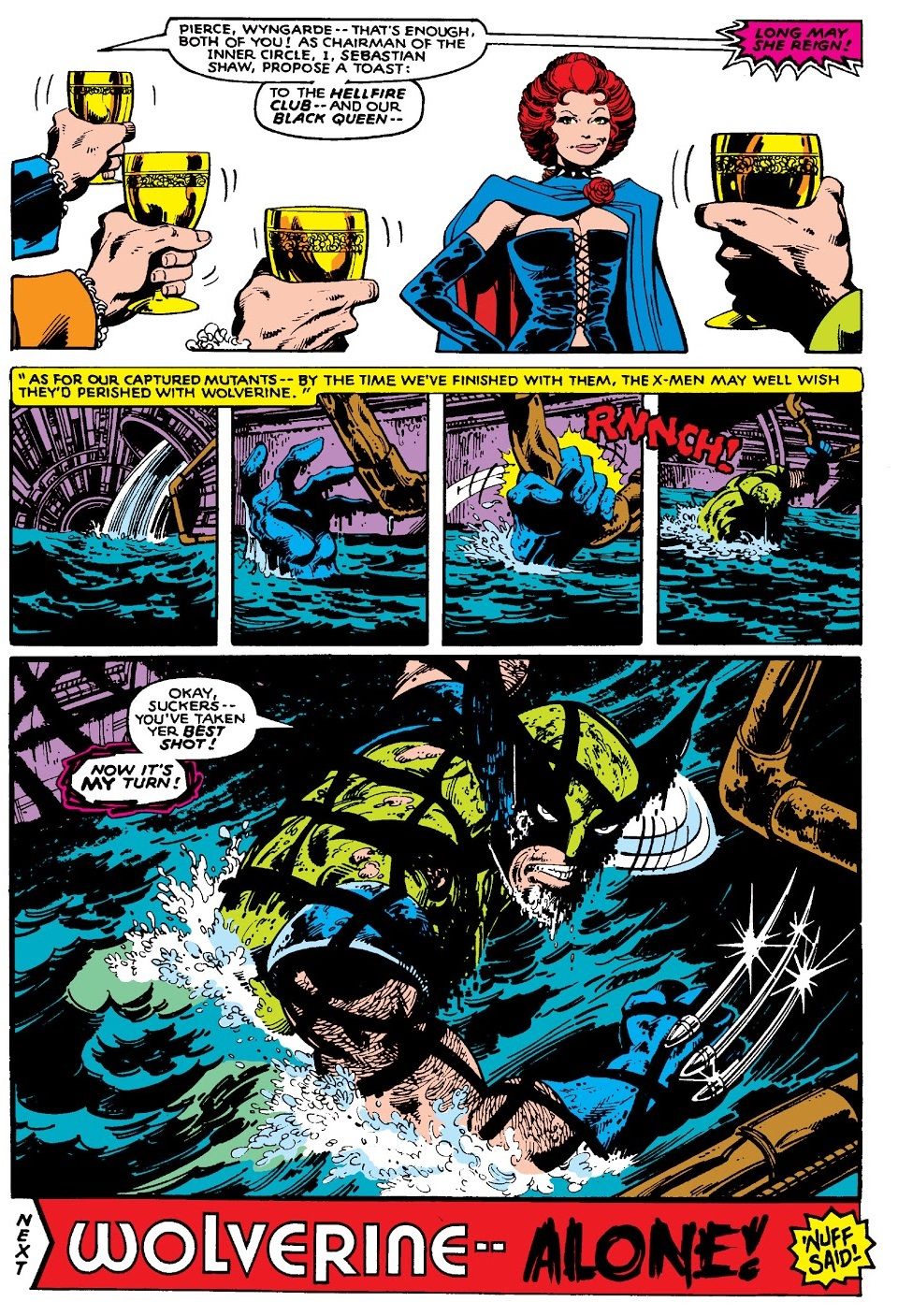 And then Jean Grey snaps and becomes the Dark Phoenix and things get all sorts of crazy.

John Byrne really does a marvelous job on the battle sequences involving Dark Phoenix as the X-Men do their best to take down their friend. They try their best in #135, but she quickly defeats them and flies off into outer space. Her traveling makes her yearn for sustenance, which she gets by entering and imploding a star, soaking in the energy of its destruction. She does not care that the destruction of the star also destroys the planet it orbits. A starship of the Shi’Ar Empire notices, though, and challenges Dark Phoenix.

She destroys the ship easily, but not before it gets off a message to the Shi’Ar Royal Throneworld, where the Empress of the Shi’Ar Empire, Lilandra (Professor X’s then-current lover) springs into action.

Meanwhile, in #136, Dark Phoenix returns to Earth where her teammates and her love, Cyclops, await her with a device meant to shut down telepaths. She destroys it and once again takes care of her teammates with ease, but Cyclops manages to calm her down by appealing to her still human side. At this point, Professor X attacks, and he and Phoenix have a telepathic battle, where ultimately, due to the aid of whatever vestiges of Jean Grey remain in Dark Phoenix, he manages to shut Dark Phoenix’s powers down.

The X-Men do not have a moment to rest, though, as they’re instantly teleported to a Shi’Ar battleship orbiting Earth, where the Shi’Ar Imperial Guard and Empress Lilandra demand Jean Grey be delivered over to them for punishment for her actions as Dark Phoenix. Professor X utters a Shi’Ar ritual challenge, which Lilandra is duty-bound to accept. Therefore, in #137, the X-Men will fight the mighty Shi’Ar Imperial Guard for the fate of Jean Grey.

The next day, the teams meet on the Moon for their battle. The X-Men are heavily outnumbered and outclassed by the Guard, who are made up of the most powerful heroes of the Shi’Ar Empire. Although the X-Men fight valiantly, they are slowly picked off, one by one, until only Cyclops and Jean remain free. When Cyclops is taken out as well, Jean begins to panic and the limits Professor X placed on her begin to crumble – Dark Phoenix frees herself and wants revenge. The X-Men stand ready to battle Dark Phoenix, but Jean manages to take control long enough to intentionally trip a defense mechanism laser, killing herself so that Dark Phoenix can hurt no one else ever again. 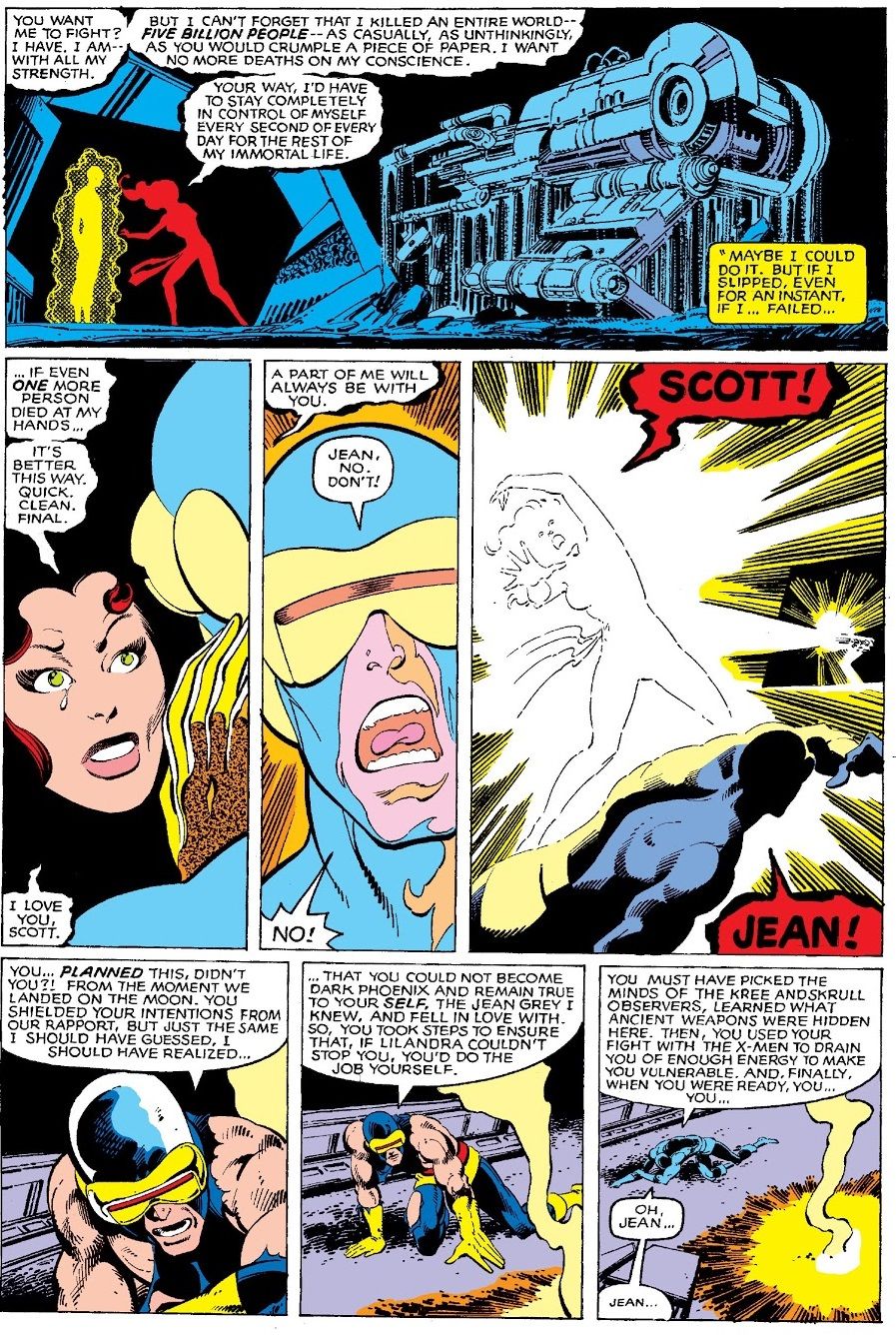 What a combination of two great stories all mixed into one saga, while killing off a major character and introducing a bunch of new ones.