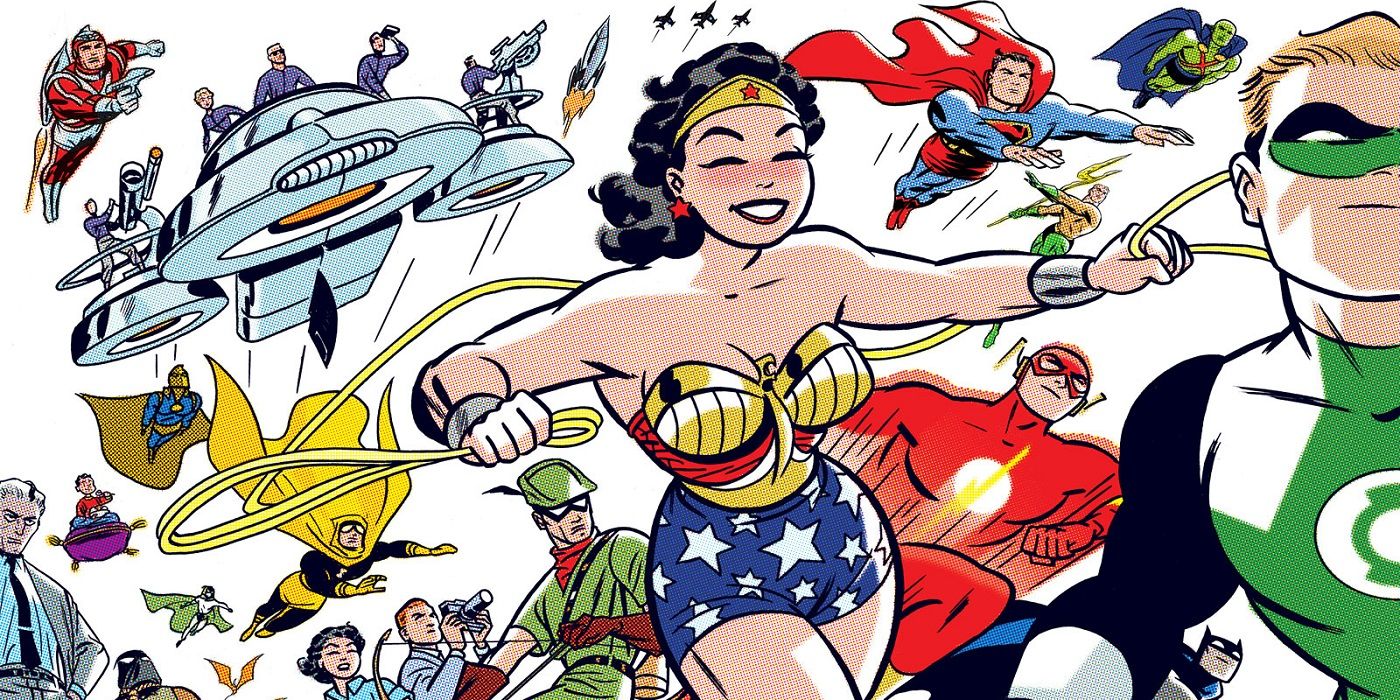 Today, we continue our countdown of your picks for the greatest comic book storylines of all-time with #28-25.

In Mister Miracle, by Tom King and Mitch Gerads, the title character attempts suicide at the start of the series and while he seemingly recovers, the rest of the series never lets that opening moment out of focus… 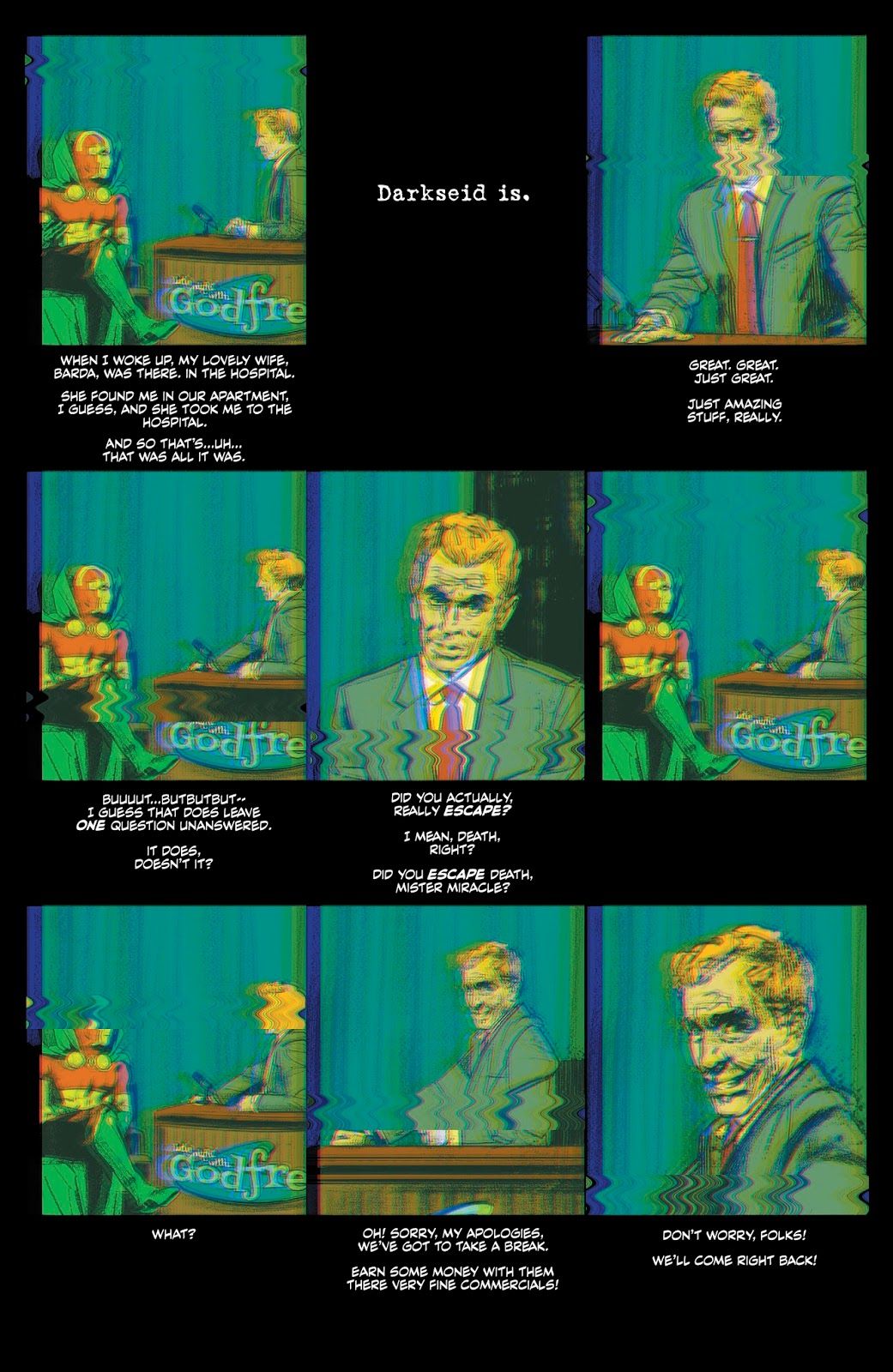 This is a book where mental health is a major theme, but paranoia is also rampant (the “Darkseid Is” flashes certainly don’t help). King explained to CBR that he used Mister Miracle as a stand-in for these perilous times, “This is the most ambitious thing I’ve ever done. Mitch Gerads and I were literally like — we looked at things like Watchmen, stories that are as good as that, that sort of reflect our time. They’re great comics but they’re deeper than that, they sort of get into the veins. So we were like, “Can we do that?” And the answer is. “No.” You can’t be Alan Moore, but you can try, right? You can be ambitious! What the hell, right?

So that’s what we said. So this is our attempt to do something like that. It’s our attempt to write a book that’s an epic, Game of Thrones-y superhero book, but it’s also about this contemporary moment. Not in terms of the politics, really. Not, “I hate Trump!” or whatever, because that’s boring. You can just read a Twitter feed and get better information. But in terms of this feeling we all have, this paranoia we all have. You wake up every day, and you’re not in the world you once thought it was. The rules that your parents taught you, the rules of life don’t make sense anymore, and you get this feeling that you’re just trapped here, like you can’t get out, no matter what you do. You’re stuck here.

And what better person to talk about this feeling we all have of being trapped in a place in a place we don’t understand than the god of escape?”

Scott Free and his wife, Big Barda, are trying to start their lives anew, but the epic battle between the New Gods and the evil gods of Apokolips rages on and Miracle and Barda can’t help but be drawn into the battle, as well. One of the important things in the comic, though, is the idea that no one is JUST one thing. There are the domestic aspects of the story but there are also the action-packed aspects of the story and no one aspect drowns out the other. That ties in with the humor in the story. It is a “dark” story, to be sure, but humor still exists within the story. Gerads noted to CBR the importance of the humor in the tale, “The thing is, nobody is humorless — and the people who are are just boring, and you don’t really want want to talk to them, you don’t really care to hear their story. For Scott, the humor is a coping mechanism — he’s always been portrayed as this happy-go-lucky guy. So in true King/Gerads fashion, we look at him and are like, “…so what’s wrong with him?”

So you look at his childhood and realize how messed up it is — so he’s portrayed as this happy-go-lucky guy because he’s compensating for this torture he’s endured for his whole life. But in our book, all that stress he’s been tamping down is all starting to boil to the top.

Like all people, Scott’s complex. He’s not just one sided, and he’s going through some stuff but he’s trying not to let it break him. It hasn’t broken him yet, even though he’s definitely cracking. That’s just how we keep it interesting — if you’re always humorless, if you’re doing a Dark Book and all you focus on is doing a Dark Book… nobody cares about that. There has to be something in it. Tom and I don’t care to tell stories about “characters,” we care to tell stories about people, and people are unique and complex and that’s all stuff we want to talk about.”

The series ends in a compelling opaque fashion, as this isn’t a book that’s about telling you the lesson that you should get from it, but it’s more just about the journey along the way, with beautifully imaginative artwork and a heartfelt, deeply personal look at trauma, mental healthy, family and paranoia all wrapped up in the colorful bow that is Mister Miracle’s vibrant costume. It’s a true comic book master class.

With the John Byrne revamp of Superman due soon, DC had one last opportunity to “say goodbye” to the pre-Crisis version of the character, and editor Julie Schwartz was delighted that Alan Moore was the man to do the farewell.

The result was “Whatever Happened to the Man of Tomorrow?” a story of the last days of Superman, utilizing pretty much every Superman villain and supporting cast member, in a story that was at both times dark and touching.

The main gist of the plot was that Superman’s enemies all become more and more vicious, with normal bad guys suddenly becoming murderers.

With the D-Level villains suddenly causing problems, the A-Level threats like Lex Luthor and Brainiac are REAL problems for Superman, so he collects his closest friends and holes up at his Fortress of Solitude and awaits the siege.

What follows next is a mix of horror and heroism and love and loss.

Here are two of the most notable tear-jerker moments, as Superman’s friends, Jimmy Olsen and Lana Lang, stand up for him, in sad but lovely ways… 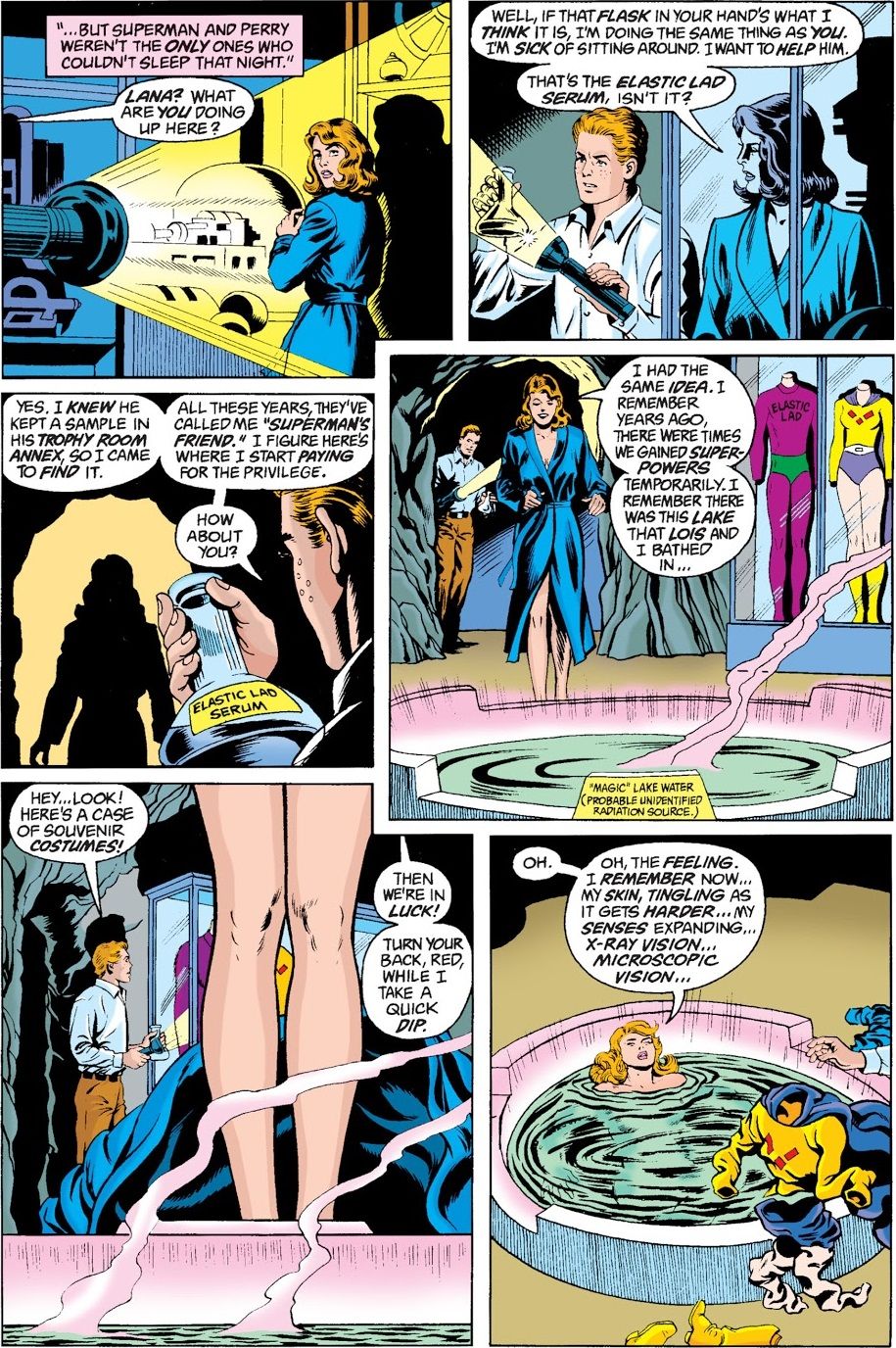 How beautifully sad is it when we see Lana’s now super-hearing hear Superman talk about Lois? And then she STILL goes off to sacrifice herself to protect him! 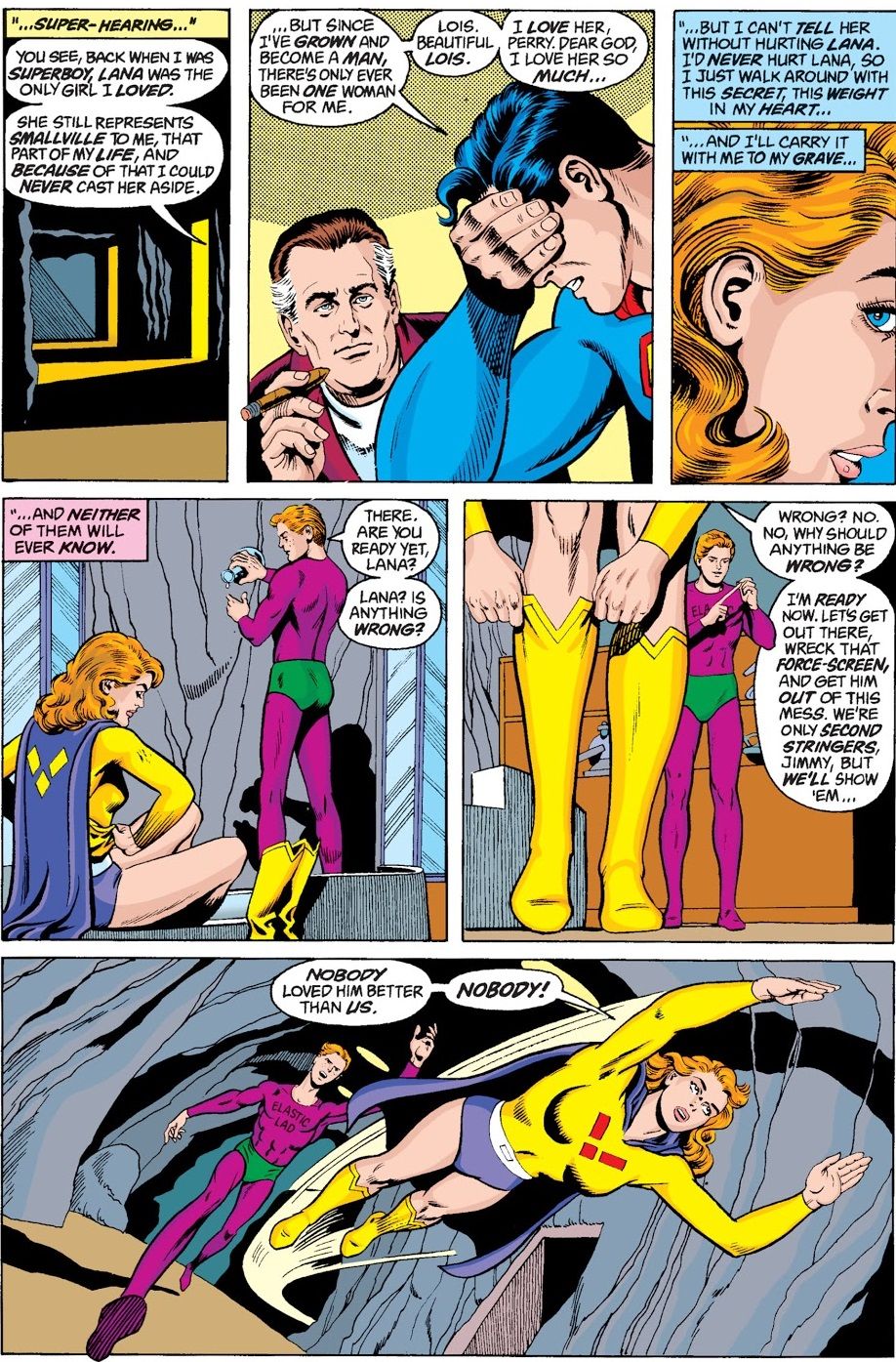 In the end, Moore took the toys that were available to him and used them all up, essentially, in such a way that the book could not have continued otherwise, leaving it perfect for a revamp of the title.

And having it all drawn by Curt Swan (with Perez inking the first issue and classic Superman artist Kurt Schaffenberger inking the second) was just a master stroke – seeing Swan draw some of the death scenes is just beyond touching (as you can see from that Krypto scene above).

This storyline works as the epitome of the epic cosmic adventures Stan Lee and Jack Kirby sent the Fantastic Four on often, with wild technology and astonishing stakes (the fate of the entire planet) but at the same time, real human elements, like Reed Richards’ reaction to having to try to save the Earth from doomsday (he doesn’t deal super well with the enormous pressure, grows a beard and even snaps at Sue). However, the most “human” part of the story turned out to not involve a human at all, as the alien being known as the Silver Surfer, the being who was the herald and literally drew the world-eating Galactus to Earth, ended up falling to Earth and learning a valuable lesson in humanity from Alicia Masters, the girlfriend of the Thing (already famous by this point for seeing the Thing’s inner beauty).

And one of the most interesting aspects (and also part of what made the Kirby/Lee FF so great) of the story is how #48 contains the ending of the previous arc and #50 has a story AFTER the Galactus story wraps up (and sets up a story for #51!). At the time, Kirby and Lee were coming up with so many ideas that something as cool as the Galactus trilogy, where basically “God” showed up to destroy the Earth, was not even the SOLE story for the three parts of the trilogy!!!

The 50th issue has some stretches of the imagination, but it also has two extremely iconic moments – Reed Richards threatening Galactus with the Ultimate Nullifier… 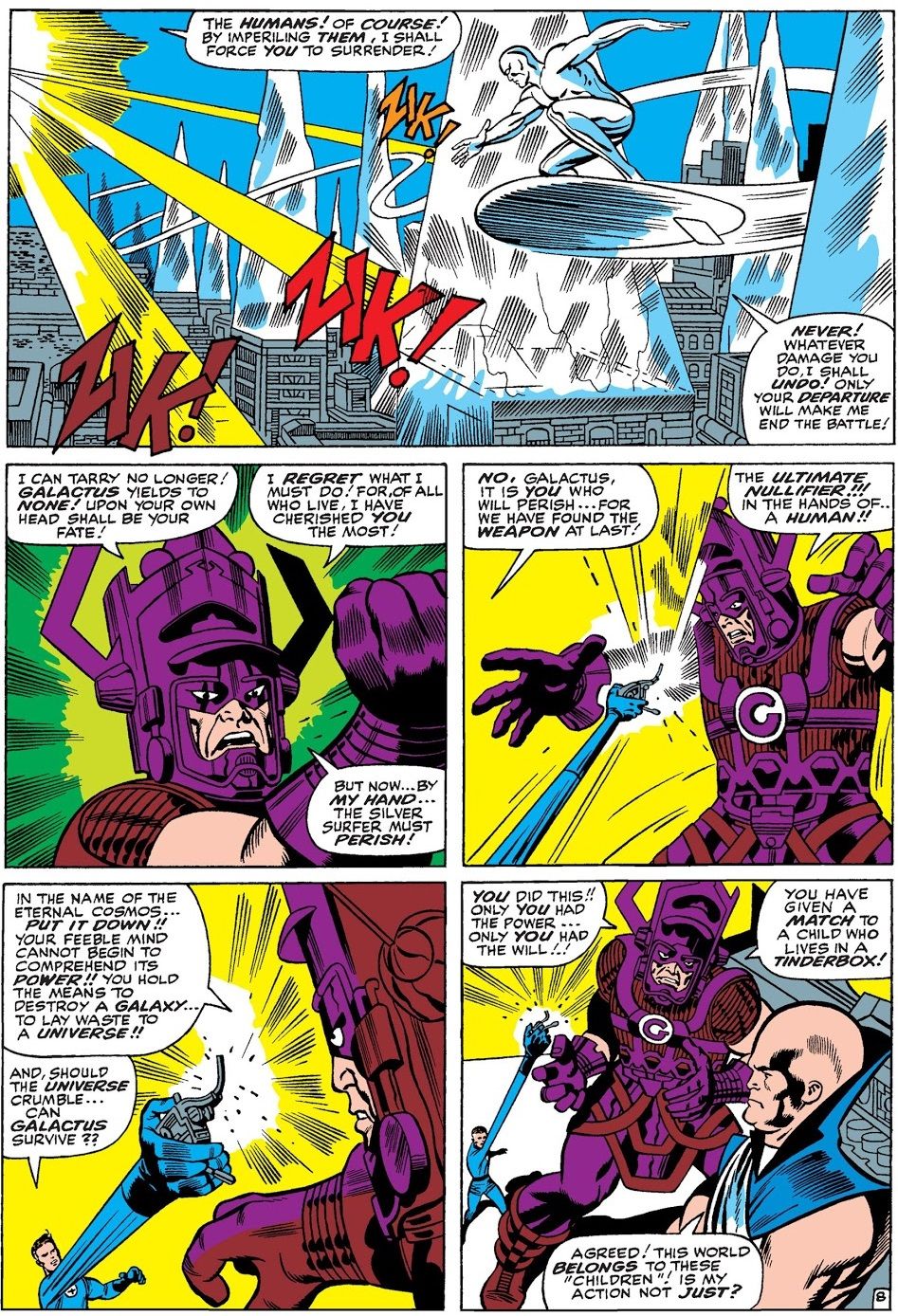 and Galactus stripping his former herald, the Silver Surfer, of his abilities to roam the galaxy, as punishment for helping to fight for the people of Earth… 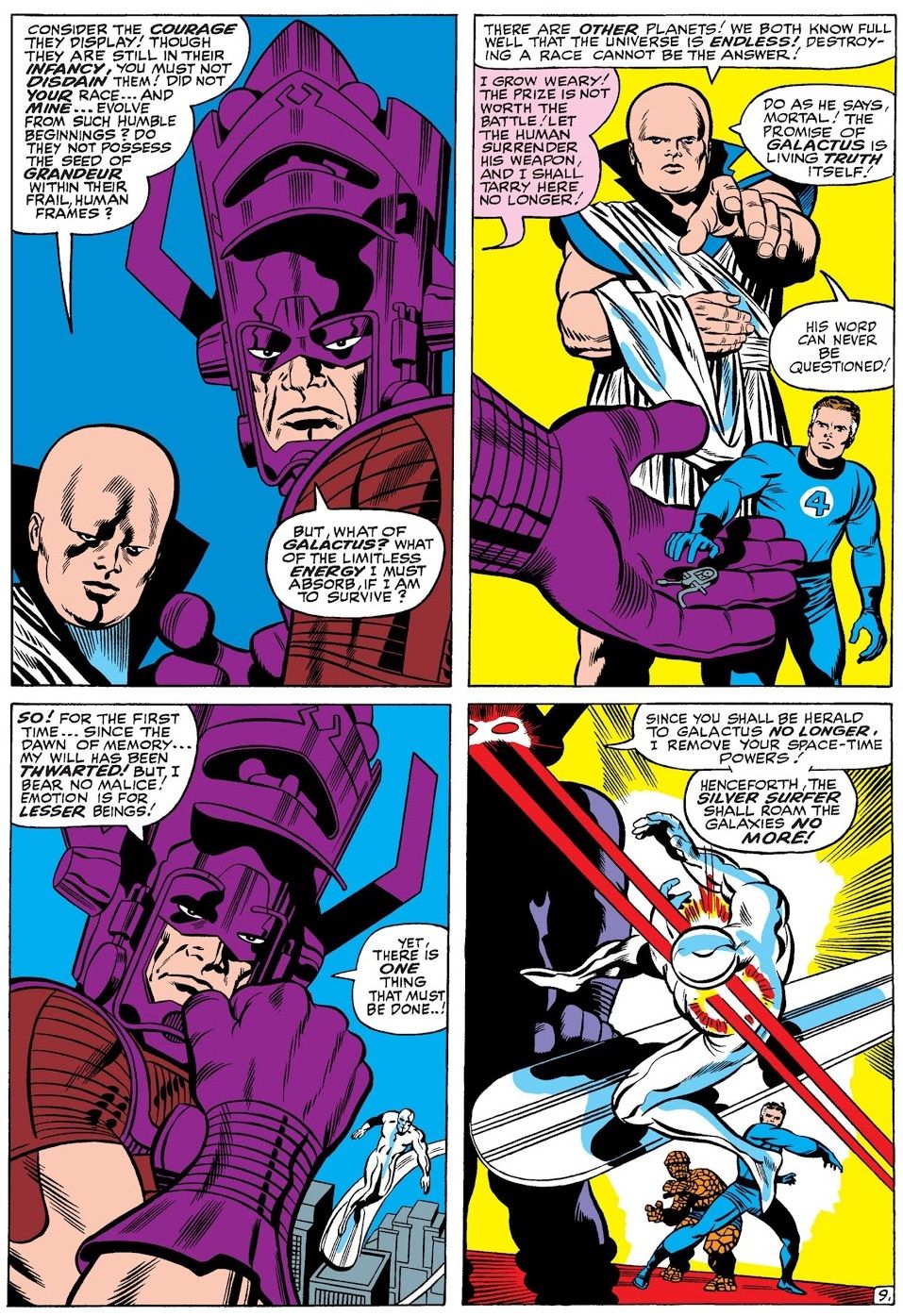 And note that these moments were handled as just one of many panels!!

You could argue that this comic had it all – great story, great art, cosmic problems, earthly problems, action – it was the complete package, and it still stands out today, more than fifty years later!

New Frontier was Darwyn Cooke’s love letter to the Silver Age of the DC Universe.

The set-up of the series was to present the formation of the Silver Age in the context of the actual late 1950s/early 1960s.

So Cooke highlights the days of McCarthyism, and applies that to the world of superheroes, painting a bleak picture for heroes.

Probably the two main characters in New Frontier are J’onn J’onnz and Hal Jordan, as Cooke shows each of their journeys to superherodom from start to finish.

The rest of the series is populated with essentially a who’s who of DC characters, all drawn wonderfully by Cooke.

The book is more or less a collection of set pieces (a Losers story here, a Superman story there, a Hal Jordan here, a Flash story there) all leading up to the point where an alien invasion forces all the heroes to band together. The key is that at this point in the DC Universe, Superman is such a major force that he has been relied on to do pretty much everything. So when the big bad guy knocks Superman out, all of the “little” guys, the DC Silver Age characters Cooke has so much affection for (and rightfully so) have to step up and save the day for themselves. This leads to one of the most epic slow walks in comic book history… 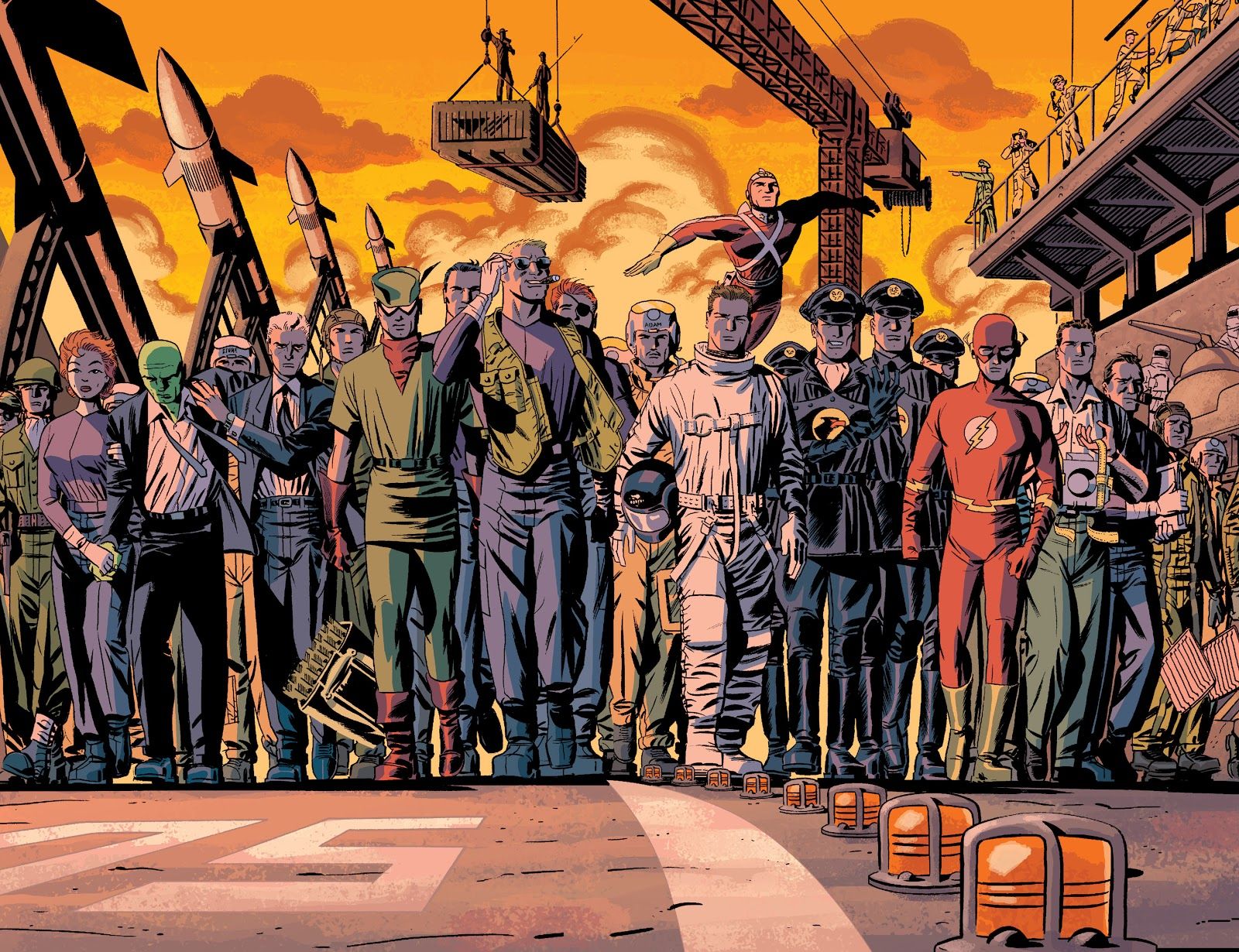 Cooke had been working in animation for years and while he had done comic book work before this series, this was his most significant introduction to the comic book world and wow, what an intro! Thank goodness that the late, great Cooke decided to give comic books another chance, as he changed the medium so much for the better that it was a joy to have him around for the last decade of his life.

Reminder, Weekly Shonen Jump Is on Break This Weekend