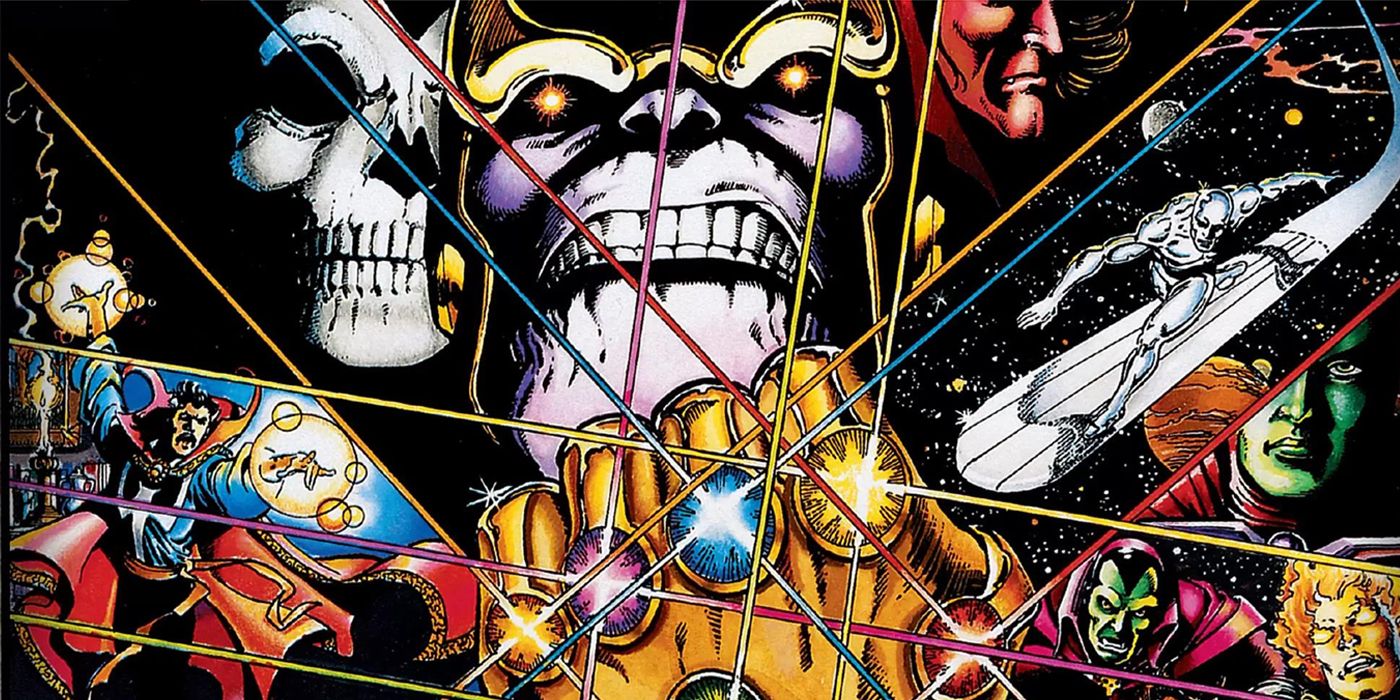 Today, we continue our countdown of your picks for the greatest comic book storylines of all-time with #24-21.

In Winter Soldier, Ed Brubaker achieved something that pretty much no one thought he could pull off. Heck, his own editor thought he couldn’t pull it off when Brubaker first suggested the idea. But after Brubaker explained it, his editor realized what readers of the title also realized – Brubaker had a really good way to bring Bucky back to life!

In this storyline, Brubaker told a few compelling stories that interacted with each other – the major one, of course, was the revelation that Bucky not only survived the rocket plane explosion that left Cap in frozen status for decades, but Bucky was rescued by Russians who brainwashed him into a deadly assassin, keeping him in cryogenic status for months and years at a time between missions (so no one would be able to identify him – after all, five years later, they’d be looking for a 25 year old man while Bucky was still 20). This is how he gained the name Winter Soldier.

Meanwhile, the Red Skull is about to start his latest plot against Captain America when a new villain steps in a seemingly kills the Skull. This new bad guy, Aleksander Lukin, was the current operative in charge of the Winter Soldier, and he used Bucky to kill Skull and steal the Cosmic Cube.

This led to a number of daring attacks and a tragic assault on the city of Philadelphia.

All the while, Captain America had been feeling out of sorts (after the events of Avengers Disassembled), so he was in a particularly poor frame of mind to discover that his former sidekick is now a pretty deadly assassin. 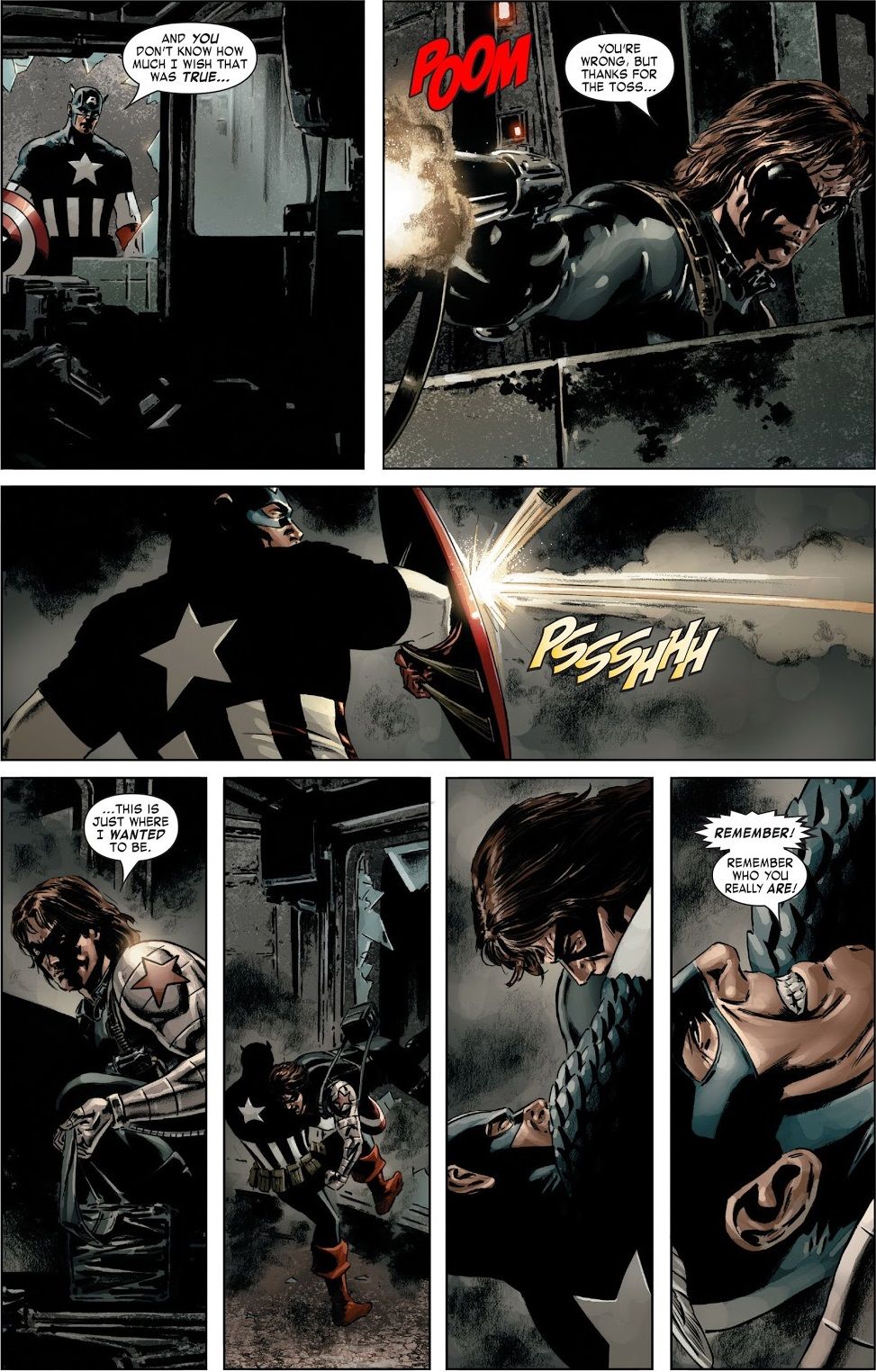 but even when he’s down, Cap’s greatest strength is still his compassion… 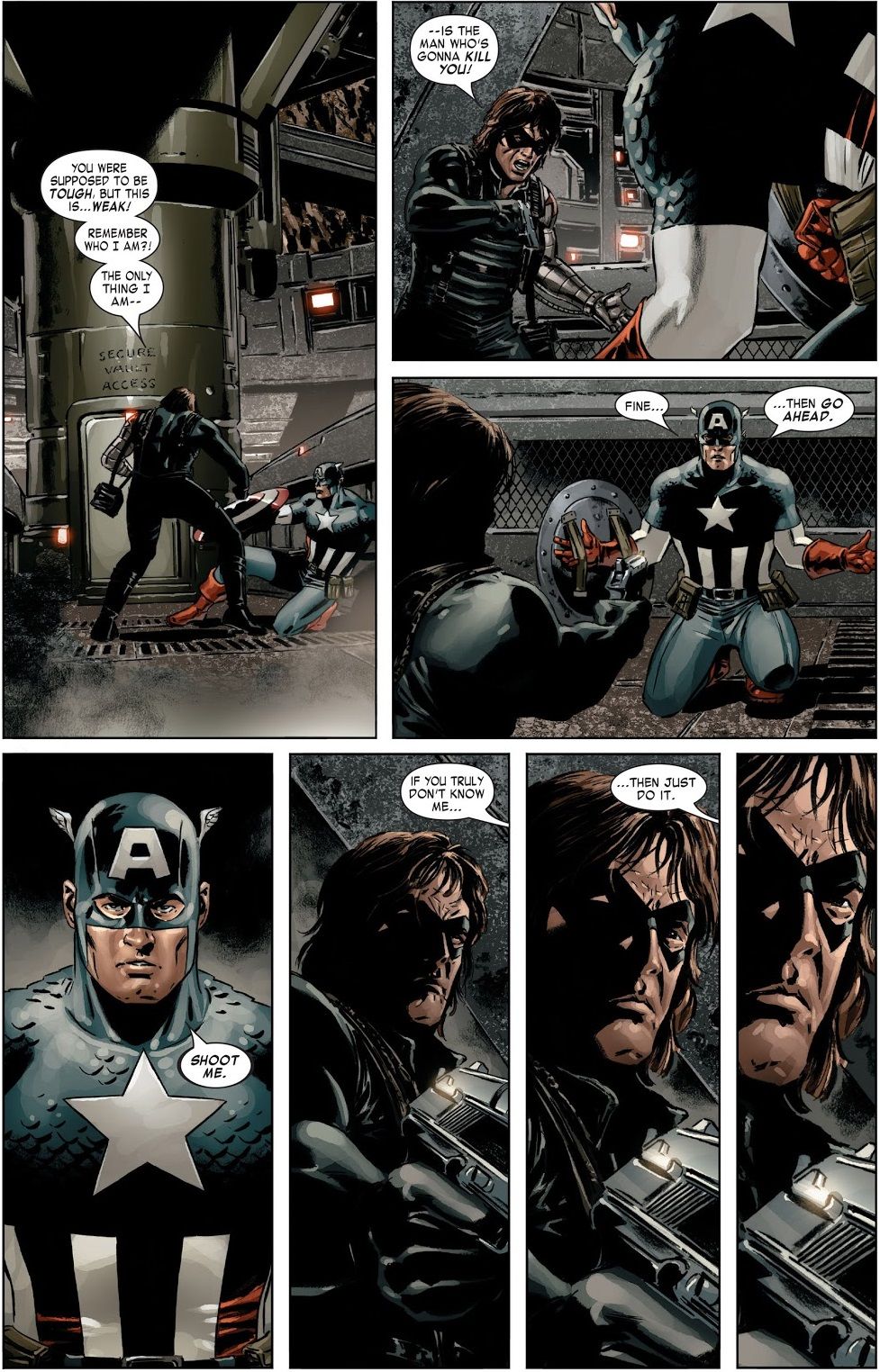 Brubaker does a really great job balancing the various characters and their personalities in the series, while never flinching on the action, either. Steve Epting busted out his new Crossgen style of art on this series, and it is truly excellent, with some fine fill-in work by Mike Perkins for Epting and Michael Lark does his typical brilliant work on some flashback sequences.

There is a fill-in issue by John Paul Leon that I suppose you could count as part of the storyline, if you so choose. It’s a spotlight on the last day in the life of a character who Winter Soldier murders in an early issue of the story.

This was an excellent opening story by Ed Brubaker, and amazingly enough, he managed to get even better on the title!

The mad god Thanos devoted his entire life (and since he has been resurrected a few times, his entire after-life) to pleasing the love of his life – Death. When Death decides she needs a champion once again, she brings Thanos back to life. In an attempt to please her, Thanos goes on a quest for the Infinity Gems; the powerful items that seem to power the various Elders of the Universe.

After finally collecting all of the gems through various methods, Thanos brings them together to form the Infinity Gauntlet, a glove that, when worn, gives the user complete power over the universe. What Thanos does with the Gauntlet is the subject of the 1991 Marvel mini-series, “Infinity Gauntlet” by writer Jim Starlin and artists George Perez (issues #1-3) and Ron Lim (issues #4-6).

His first act, seen in the first issue, to impress Death is to kill half of the universe, which he does with a snap of the fingers. The remaining half of the universe, naturally, is not happy about this and sets about to try to stop Thanos. They are aided by a similarly resurrected Adam Warlock, who was Thanos’ main nemesis back when they were both first alive.

Warlock helps organize an excursion of as many superheroes as they can gather (Doctor Doom, too) to attack Thanos at his fortress. Thanos, meanwhile, in another attempt to impress Death (as suggested to him by that wily devil, Mephisto) has used the Gauntlet to make himself fallible, so that the superhero army attacking him actually has a theoretical chance at defeating him.

The heroes leave in issue #3, and it is in #4 that the battle takes place. Thanos mows through the heroes like he’s a hot knife and they’re all sticks of butter. Cyclops is suffocated, Iron Man has his head torn off, Thor is turned to glass – it is not pretty. Finally, only Captain America remains, and in an impressive act of defiance, stands up to Thanos one on one. 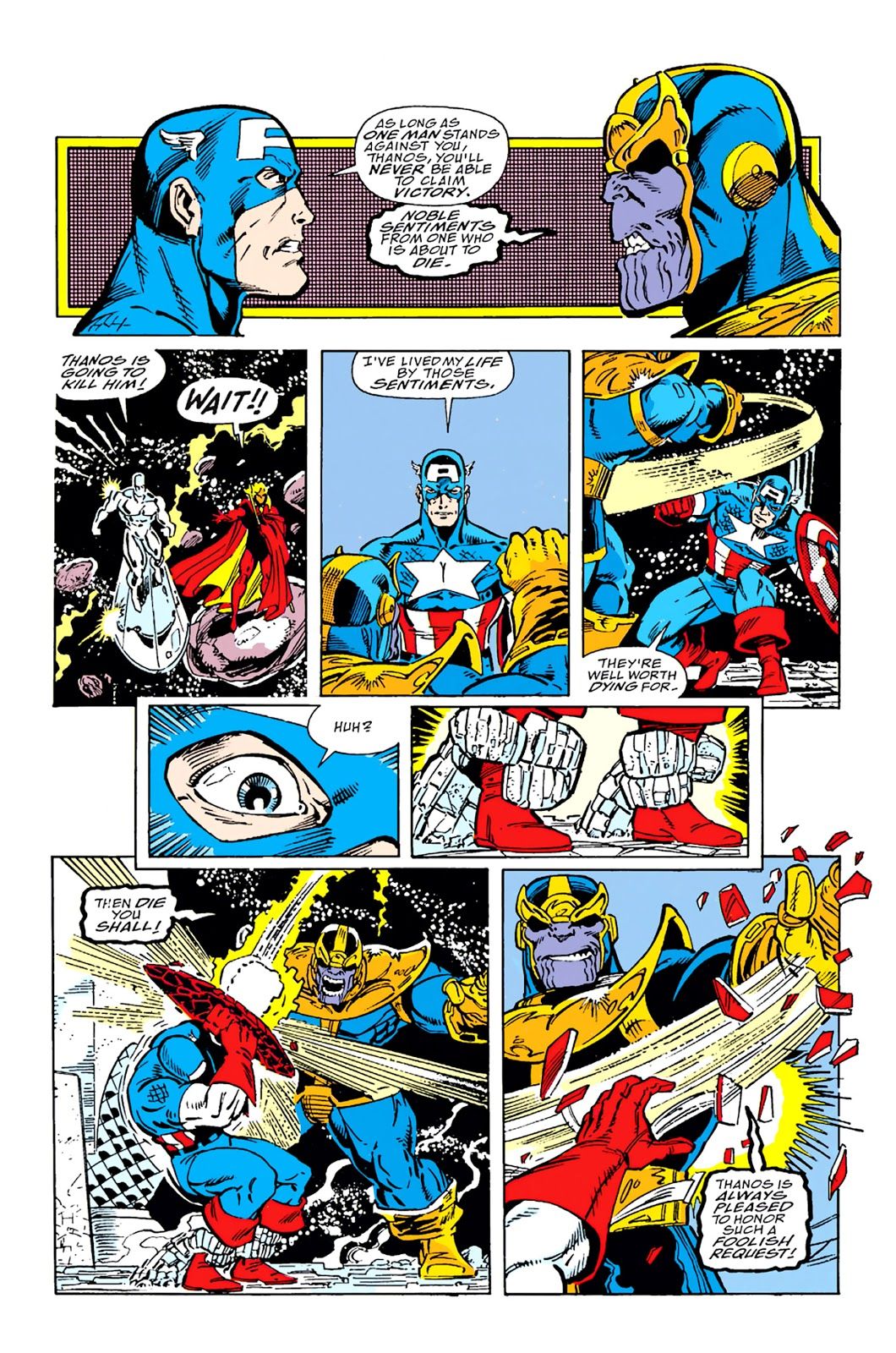 As Thanos gets ready to smite Cap, Warlock’s real plan springs into action. The Silver Surfer swoops in at light speed to snatch the gauntlet away from Thanos. The whole attack was just a diversion so that Surfer could steal the gauntlet. 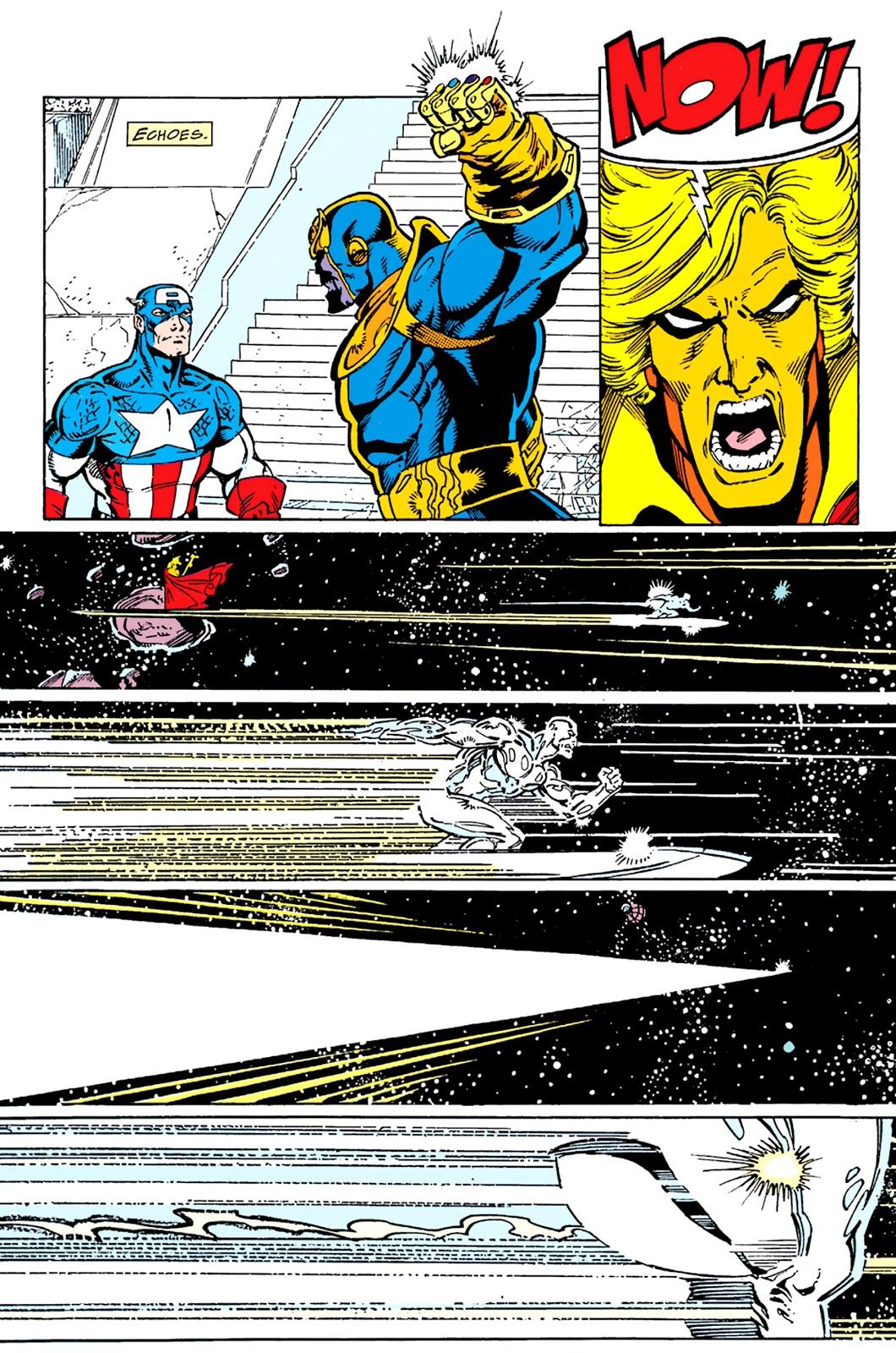 Only the Surfer misses.

You’ll have to read the rest of the series to see what happens next, but suffice it to say that Starlin did a heck of a job on this crossover.

This time-travel classic stars a unique team of Avengers plucked from the past, present and future, who have to take on Immortus and the Time Keepers, a powerful group that has been manipulating the Avengers for years. Each member of the team is chosen at a very specific moment, as Busiek, Pacheco and Merino demonstrate in this sequence from the second issue of the series… 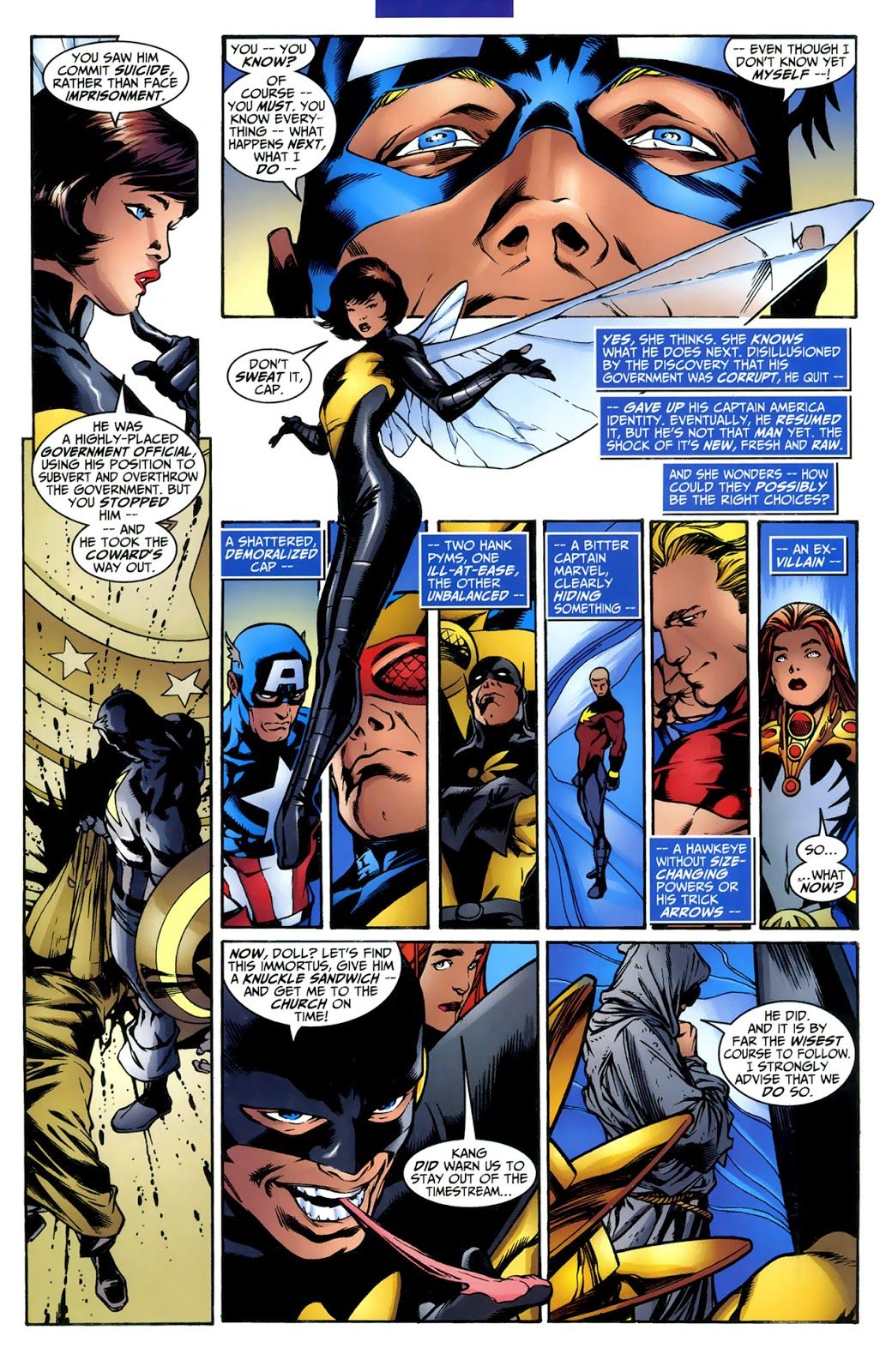 As you can see, Pacheco is a master at giving each character a distinct look and best of all, when you put the disparate heroes together, there is this great sense of visually being able to figure out how each character is reacting to a situation. So much personality in each drawing. Boy, he’s good.

Busiek and Stern’s epic tale brings this rag tag team of Avengers on a journey through history and the Multiverse itself as they try to take hold of their own destinies. They are aided on this journey by one of their greatest foes, Kang the Conqueror, who ALSO wishes to break free of the control of Immortus and the Time-Keepers. Anything should be possible and that possibility is what the Avengers and Kang fight for (although, in the end, can you really trust Kang?)

Along the way, Busiek also ties up some looses ends of Avengers continuity. The whole thing is an epic action adventure steeped in Avengers history but centered the whole way through in real, identifiable human reactions.

At the heart of V for Vendetta is an engaging and difficult dilemma – if you HAD to choose, what would you prefer? Fascism or anarchy?

In the former, yeah, you’d be ruled by dictators, but after they had finished culling their opponents, the odds are that you personally wouldn’t be directly affected anymore. You’d just be a cog in the machine.

In the latter, yeah, you’d be free, but there would be no protection from chaos.

It’s a beautiful dilemma, and while we would all love to answer that we would prefer the latter option, in real life, people very often choose the former, and Alan Moore milks the dilemma for all that it is worth in this alternate reality where a “terrorist” named V (who wears a Guy Fawkes mask) tries to bring down the government, hopefully with the help of a young woman named Evey.

Moore and his brilliant artistic counterpart, David Lloyd, create a lush, dark and vibrant world that is too scary to want to live there, but too interesting not to want to read more about.

Here is one of V’s notorious attacks on a government agent, with V giving his own back story in the process.… 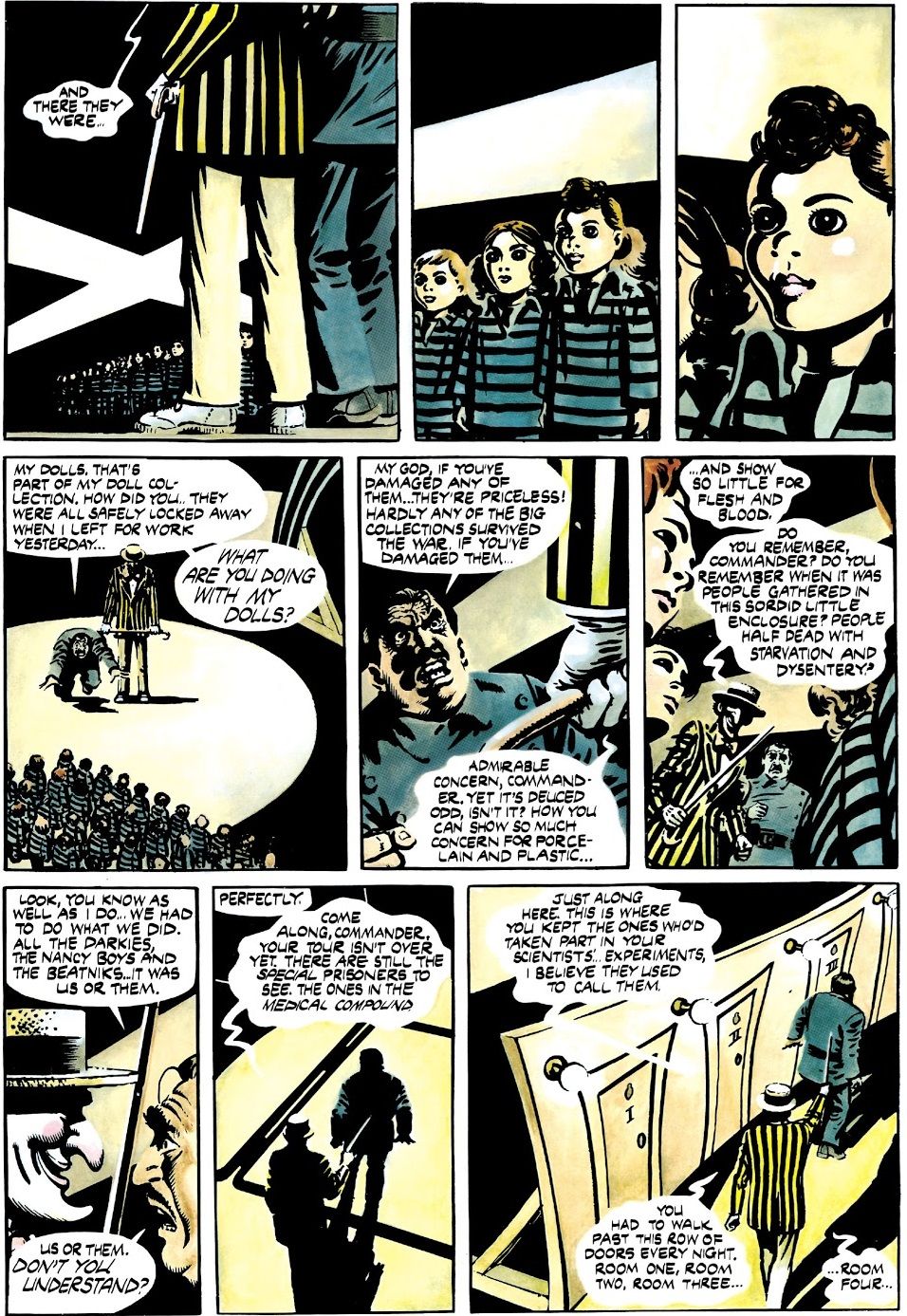 before a big reveal.. 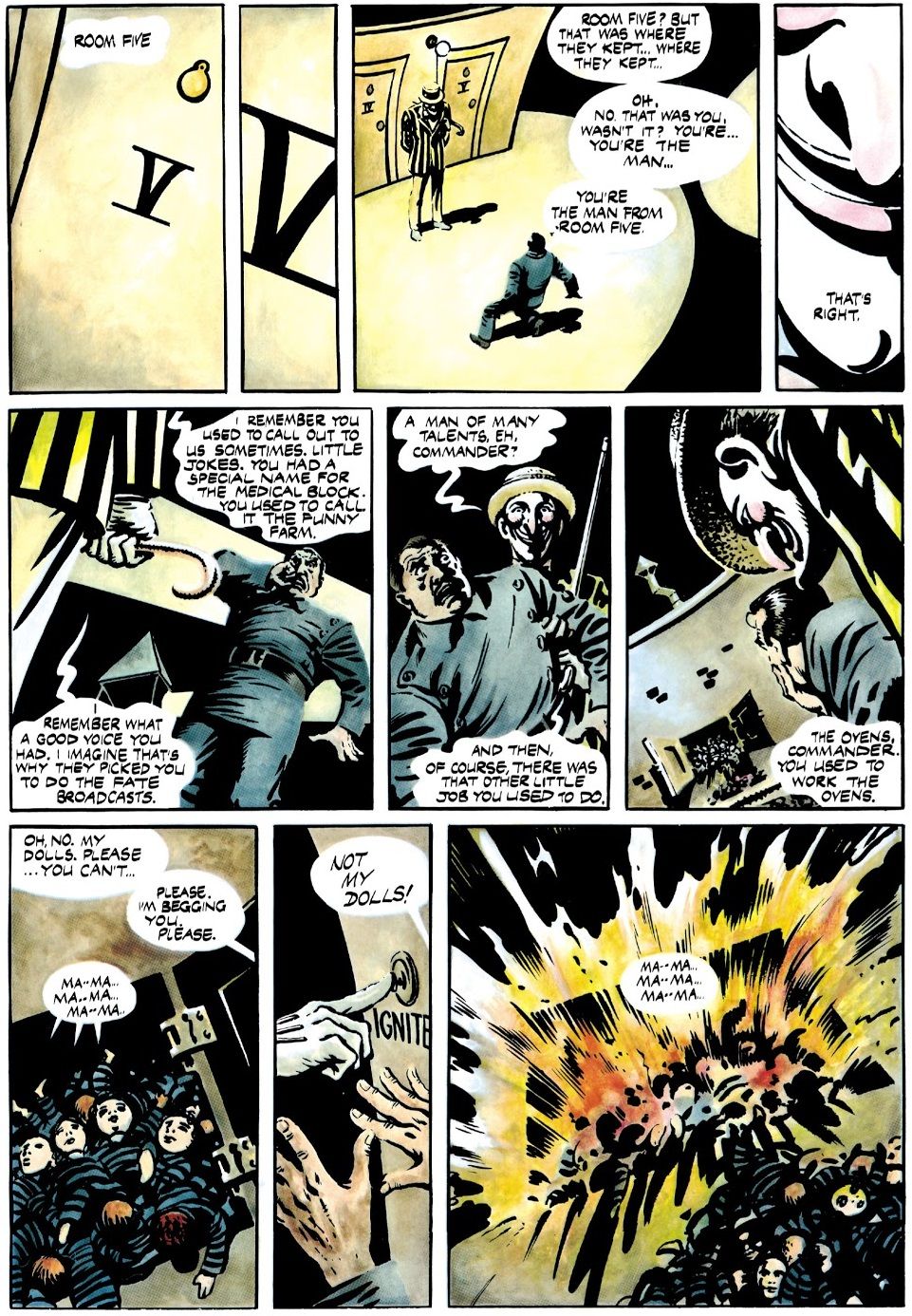 The centerpiece of the story is the evolution of Evey from a perpetual victim to becoming directly involved in V’s revolutionary actions. What’s great about these bits is that Moore lets us see how Evey vacillates on her opinion about V. Like Evey, we never really know too much about V, as his enigmatic nature allows Evey (and we, the readers) to place upon V are own viewpoints – we might see V as too sadistic, we might see him as a hero, we might see him a psycho who just happens to pick a good cause – Moore doesn’t lead Evey or us to any specific point of view. We get there all on our own.

Superman’s Fortress of Solitude Has Disappeared