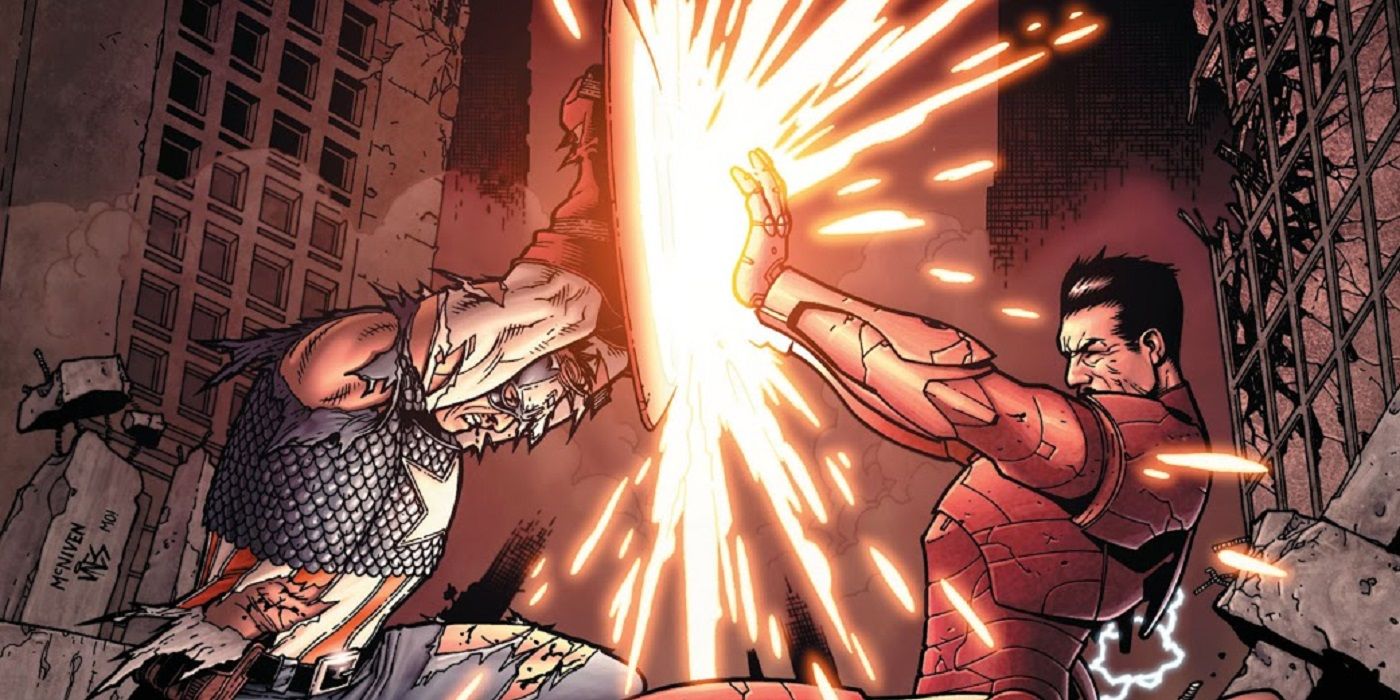 Today, we continue our countdown of your picks for the greatest comic book storylines of all-time with #20-17.

The Judas Contract was the pay-off on an amazing slow build. In the very first issue of the New Teen Titans, the group faced off against a mercenary named the Ravager. He died fighting the Titans. His father was introduced the next issue, picking up his son’s unfulfilled contract. Deathstroke the Terminator would soon become one of the most acclaimed villains of the 1980s.

Thirty-four issues into the series, we learn that a brand-new member of the Titans, Terra, who had joined a few issues earlier, was secretly working for Deathstroke.

From that point on, the slow burn came to a simmer as readers realized that Terra had to eventually make her move and this storyline was it.

The first issue was an awesome “Day in the Life” issue that doubled as showing us how Terra was monitoring the group and looking for their areas of weakness. She almost breaks cover towards the end during a training session where she lets out a little of the real hate that she feels for the Titans, which leads to a really cool transition to a scene with her and Deathstroke… 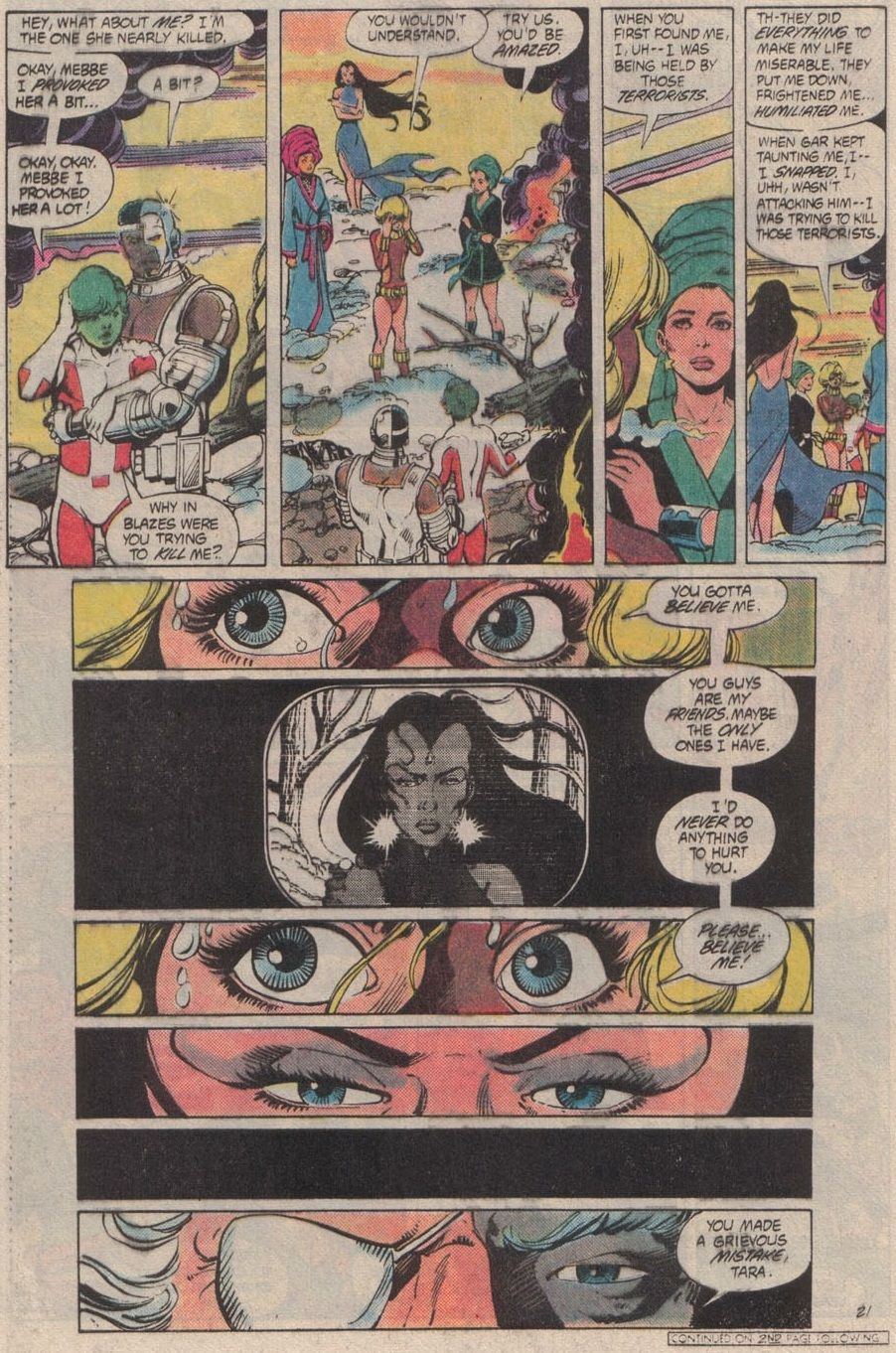 The Deathstroke/Terra relationship was one of the great “oh man, this is so disturbing” comic book relationships of the 1980s. Of course, it was SUPPOSED to be icky, so it works, but boy does it work well in making you squirm reading it.

Anyhow, Deathstroke makes his move the next issue and takes out most of the team, only Dick Grayson (he had recently quit being Robin) avoided capture.

Dick meets up with Deathstroke’s ex-wife and Deathstroke’s other son, who is still alive. Deathstroke’s wife gives Dick the lowdown on how Deathstroke came to be. It’s an amazingly well-told origin and the ending of it is truly outstanding, as we see the extent of Deathstroke’s bizarre sense of “honor.” It lost him his wife, it indirectly lost him his oldest son (who decided to follow in his father’s ways) and it cost him the voice of his youngest son (who had his throat sliced when he was taken hostage by one of Deathstroke’s enemies and Deathstroke was so confident that he could take out the rival before he could cut his son that he took the shot and was partially wrong, leading to his son’s throat being cut enough to sever his vocal cords forever. Deathstroke’s wife then severed their relationship by shooting Deathstroke in the head for letting his arrogance (and keeping his mercenary work a secret from his family) main their son. He survived, but lost an eye, leading to his famous eye-patch look.

Anyhow, Dick of course debuts his new identity in this storyline, with the well-thought reasoning behind the name Nightwing (as a split between his Batman influence and his Superman influence). 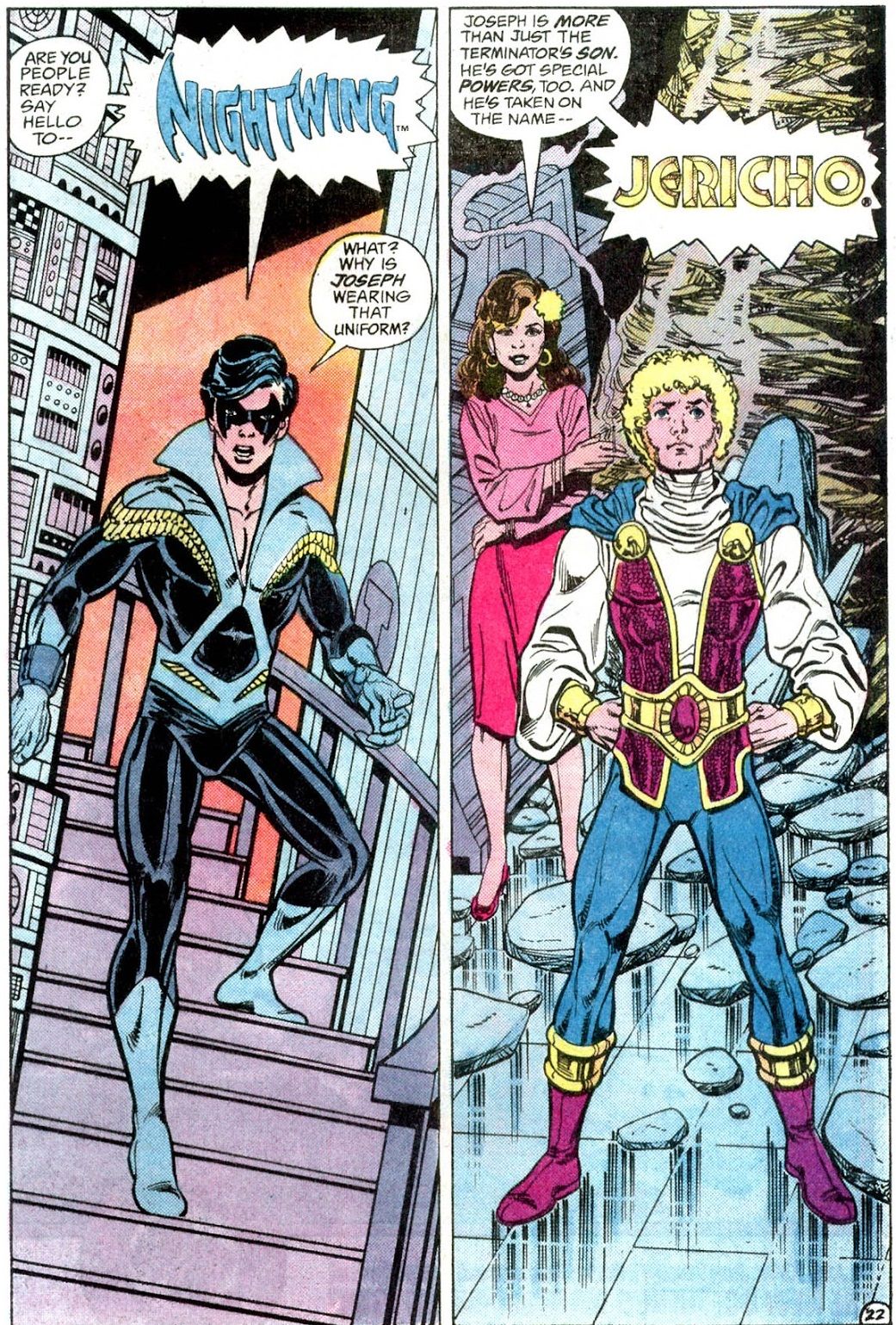 Dick and Deathstroke’s family goes to rescue the Titans and it leads to a dramatic conclusion with one Titan not making it out alive (luckily, it is the Titan who betrayed everybody, so it’s all good).

Mark Millar, Steve McNiven and Dexter Vines reshaped the Marvel Universe for years with this storyline that pitted Captain America against Iron Man over the question of whether superheroes should be forced to register with the government (and thereby trusting the government with their secret identities). Essentially, are superheroes so dangerous that letting them run around without supervision is almost as dangerous as the supervillains that the heroes fight on the street? The question was driven in great part by an incident at the start of the series where the New Warriors get into a fight with some supervillains and the villainous Nitro explodes, killing most of the Warriors but also hundreds of innocent bystanders, including dozens of school children (as the fight took place near by a school). If the Warriors were better trained, would they have known not to start a big fight next a school like that? That’s the question that drives Iron Man as he reluctantly agrees with the government and becomes the face of registration (along with Iron Man’s then-protege, Peter Parker, who shockingly reveals his secret identity to the world to support Registration).

Captain America, however, feels that it is a violation to force superheroes to give up their privacy, not to mention the fact that he has had enough history with the government not being trustworthy to know that it doesn’t make sense to trust it with your secrets. Eventually, Captain America and the heroes who think like him have to go on the run and do their superhero actions as fugitives. Iron Man and Mister Fantastic, meanwhile, embrace their new situation as being part of “The system” by using it to form new innovations (along with some sketchy ones, like building a prison for un-registered super beings in the Negative Zone).

One of the best things that Millar does in this series is know when to let Steve McNiven’s stunning artwork just take over, like this sequence where Cap’s team sneaks into the prison and gets surprised by Iron Man…or ARE they? As seemingly one of Iron Man’s allies betrays him…or DOES he? 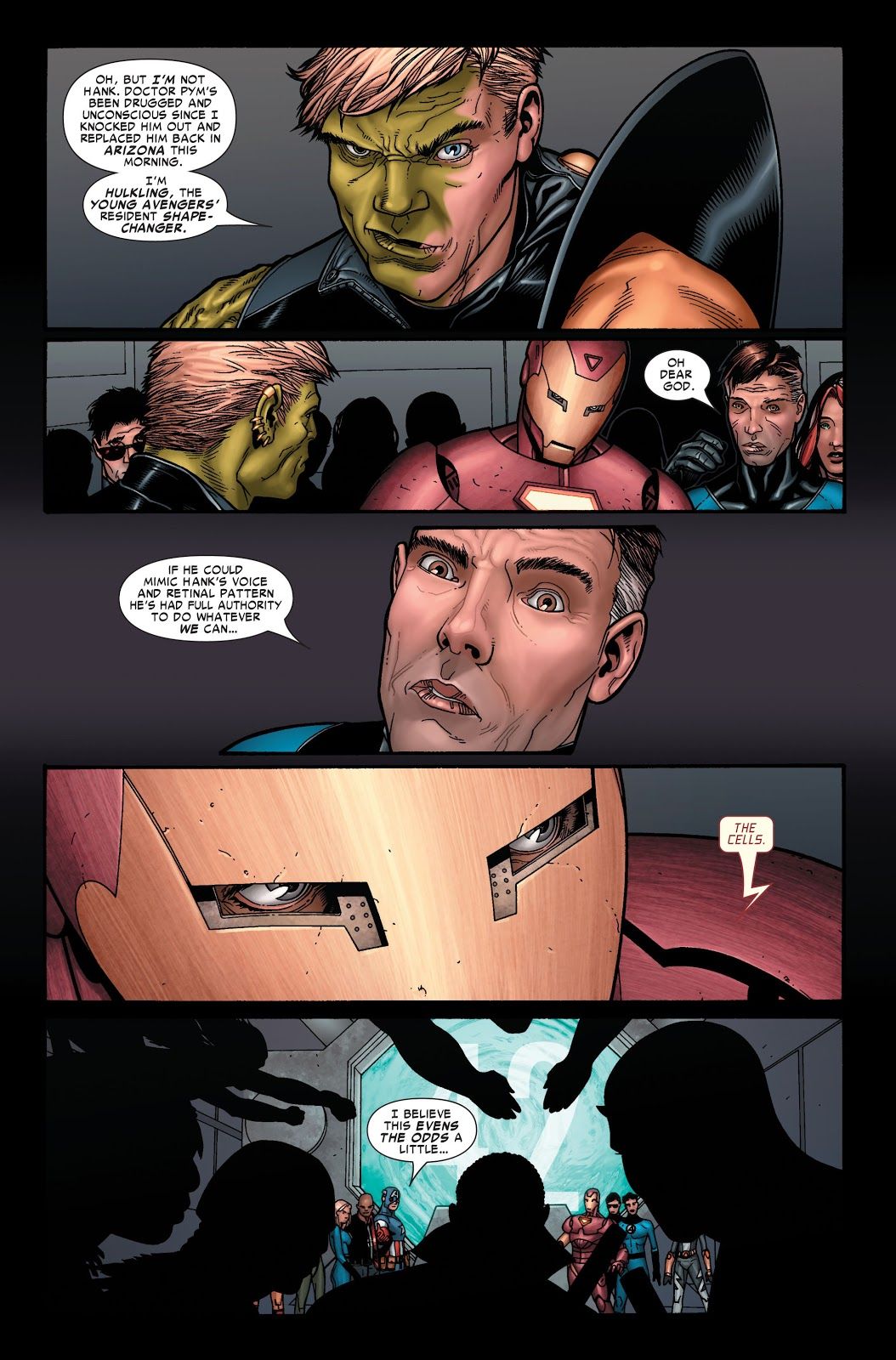 And then that stunning double page splash… 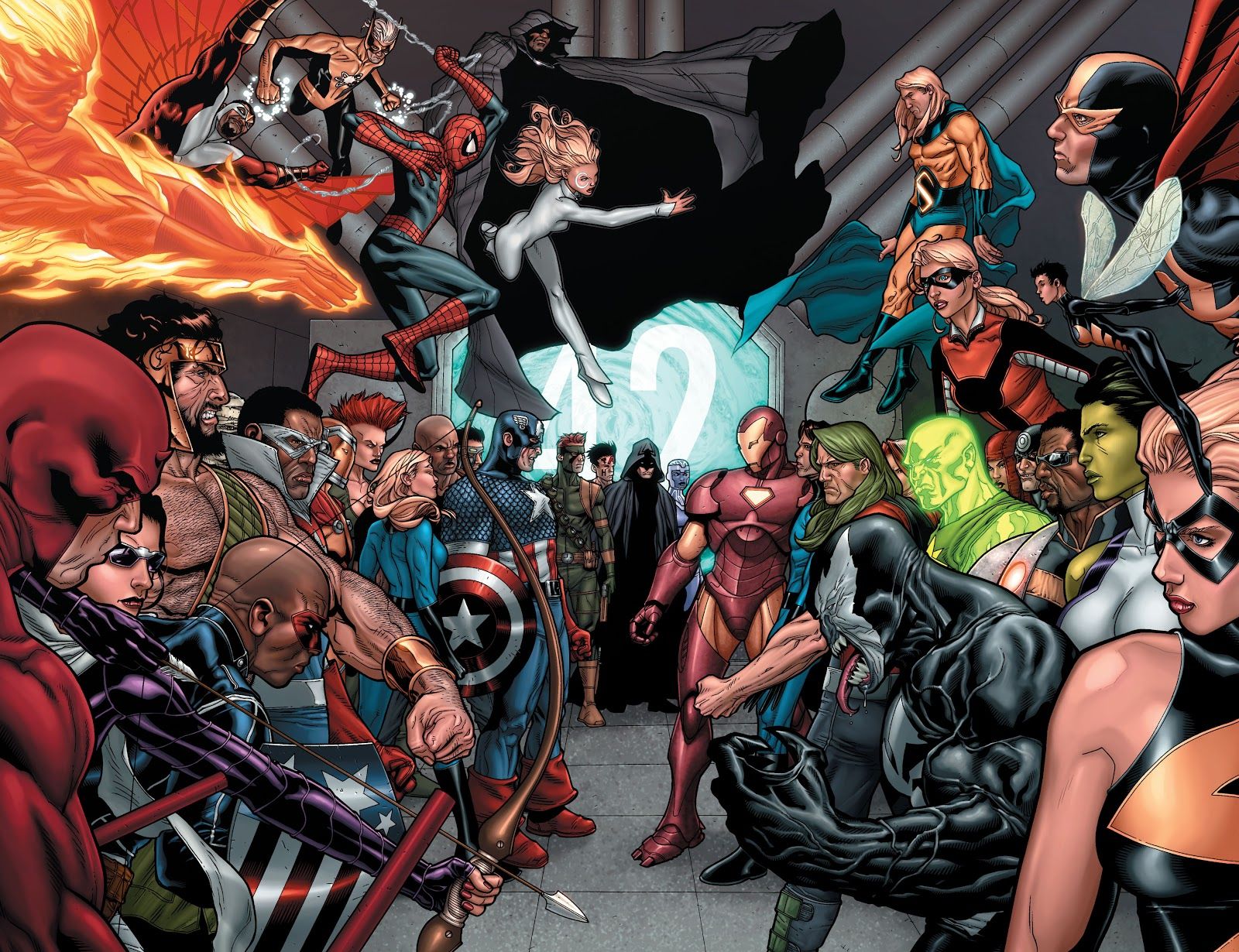 This series massively shook up the Marvel Universe as a whole but especially the Avengers, who ended up splintered into two teams, an officially sanctioned one and a rogue one. Naturally, the government was also soon taken over by the evil Norman Osborn, so Cap’s fears came true.

In this acclaimed mini-series that launched both Alex Ross and Kurt Busiek to comic book stardom, we follow Marvel’s Golden and Silver Age through the eye (and the lens) of photographer Phil Sheldon. From the days of World War II to the explosion of superheroes during the “Marvel Age,” Busiek’s character-driven narrative and Ross’ photo-realistic artwork really makes you feel like you are living through an age of heroes. And therefore, you can also feel the pain when the heroes somehow do not manage to live up to our lofty expectations.

Perhaps one of the most compelling pieces in the story is when we see the contrast between how the Fantastic Four and the Avengers are treated (as the wedding of Reed and Sue is right up there with JFK and Jackie or Liz and Dick in terms of attention) with how the X-Men and mutants are treated. See how Phil himself is forced to confront his prejudices when the “mutant threat” hits close to home… 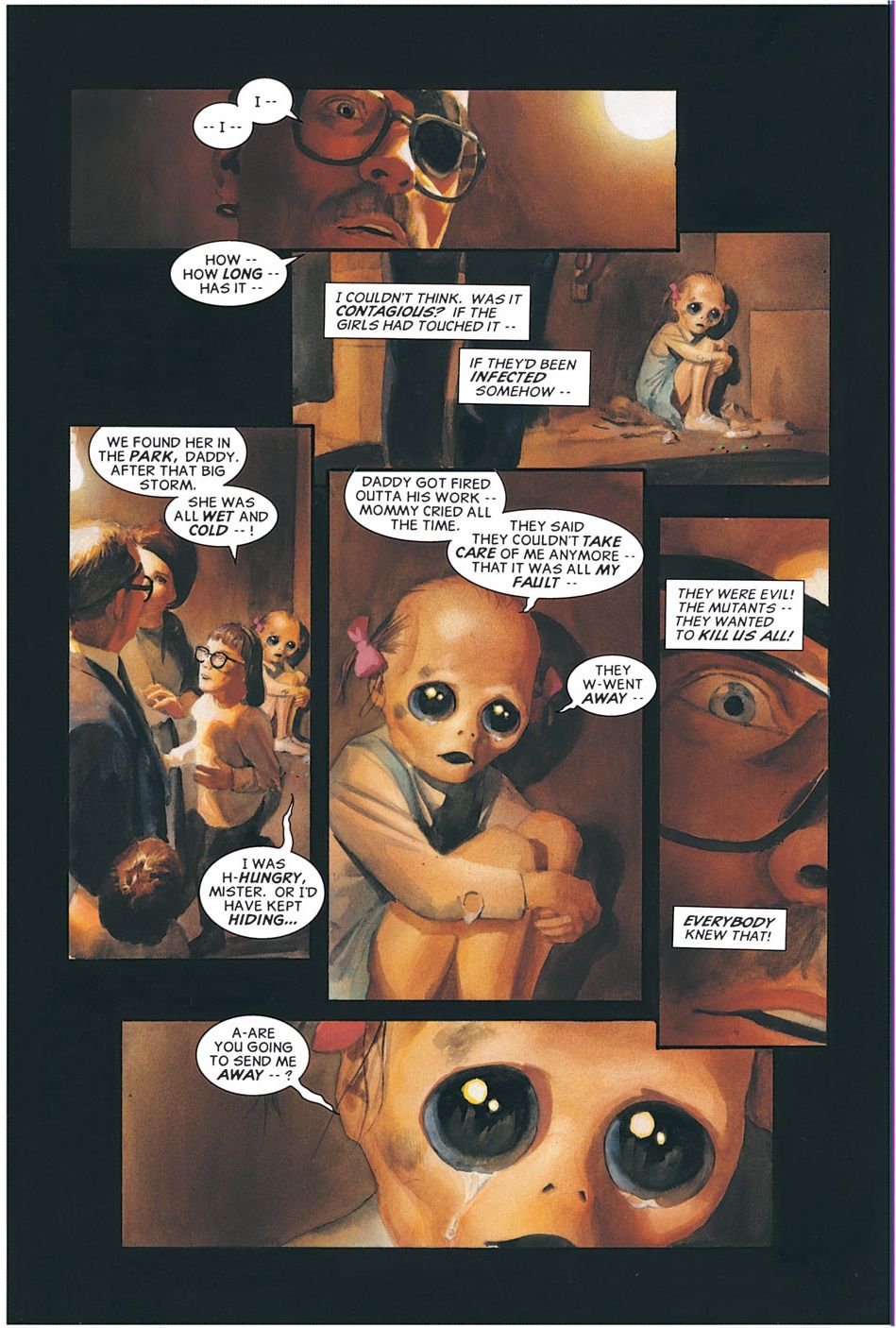 Luckily, Phil is a good man… 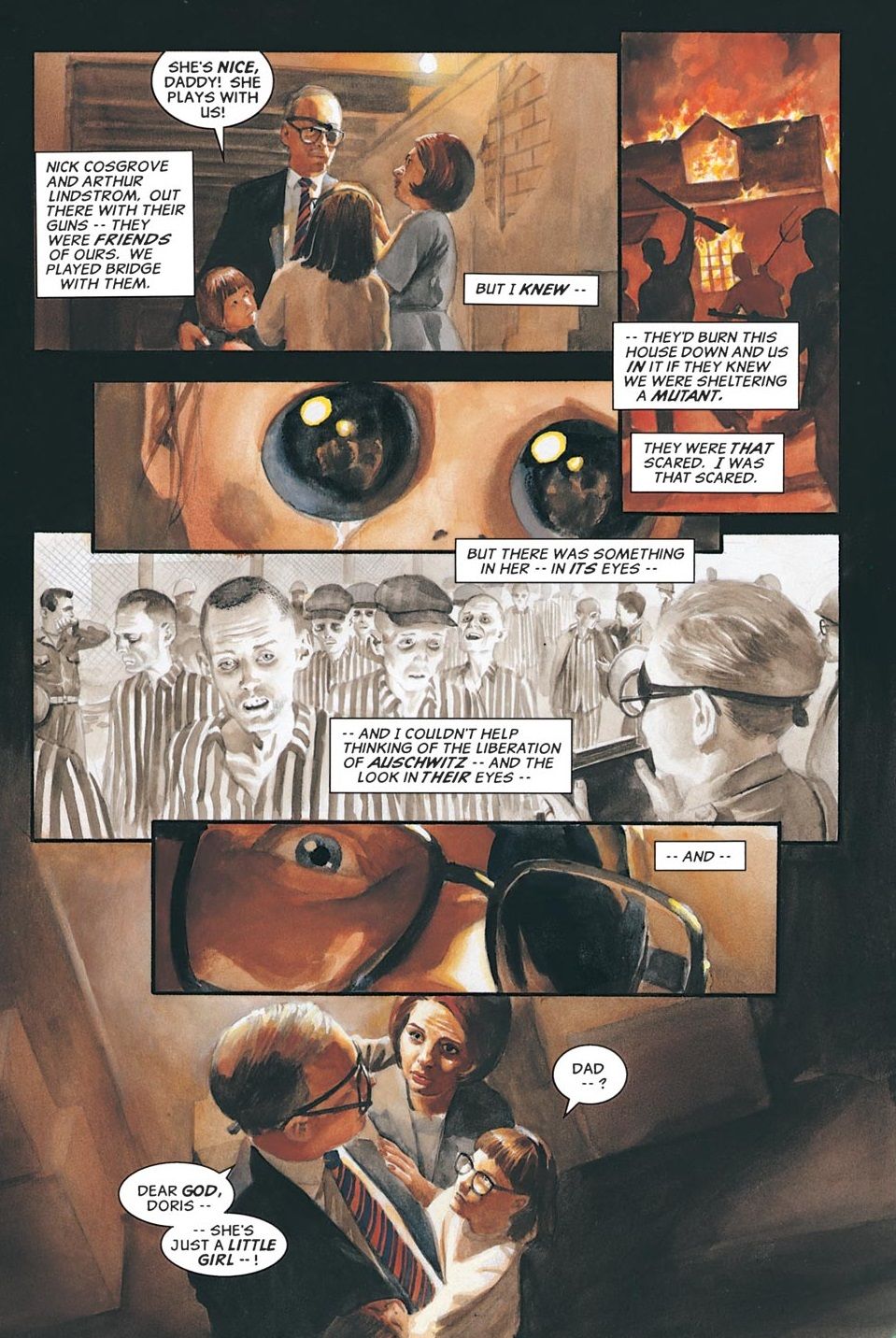 What a powerful sequence. But this series is FILLED with powerful sequences. Like how in the world would the man on the street react to news that some giant dude was showing up to EAT THE EARTH?!!? From over-the-top stuff to the down-to-earth sadness of the death of Gwen Stacy (that punk Peter Parker makes a living off of making Spider-Man look bad and he gets an angel for a girlfriend? And then she is murdered while he continues to live on making money off of Spider-Man’s misery? Where is the fairness?!?), Busiek and Ross really shine a spotlight on the human condition like few other stories are capable of.

This storyline is particularly interesting in the fact that, right smack in the midst of it all, Gwen Stacy and Harry Osborn are introduced!

The story is set as Peter Parker is just beginning college – he hopes to be able to concentrate on his studies, but he soon learns that his Aunt May is deathly ill, likely due to a blood transfusion Peter gave her a number of issues ago (his blood being radioactive and all).

So Peter finds out a way of curing her, but he needs a special serum. Well, the problem is that a criminal known as the Master Planner ALSO wants the serum.

How Spider-Man gets out of this mess is the thing of comic book legend, and that’s just who the creative team was – Steve Ditko delivers what was basically his swan song on the title (he stuck around for a few more months, but clearly, this was the high water mark of his run – everything else was downhill from here until he left at #39, likely because he knew he was on the way out), and he goes out in style, with some of the most brilliantly designed pages of the Silver Age.

First, we see Spider-Man become inspired to get out of his predicament… 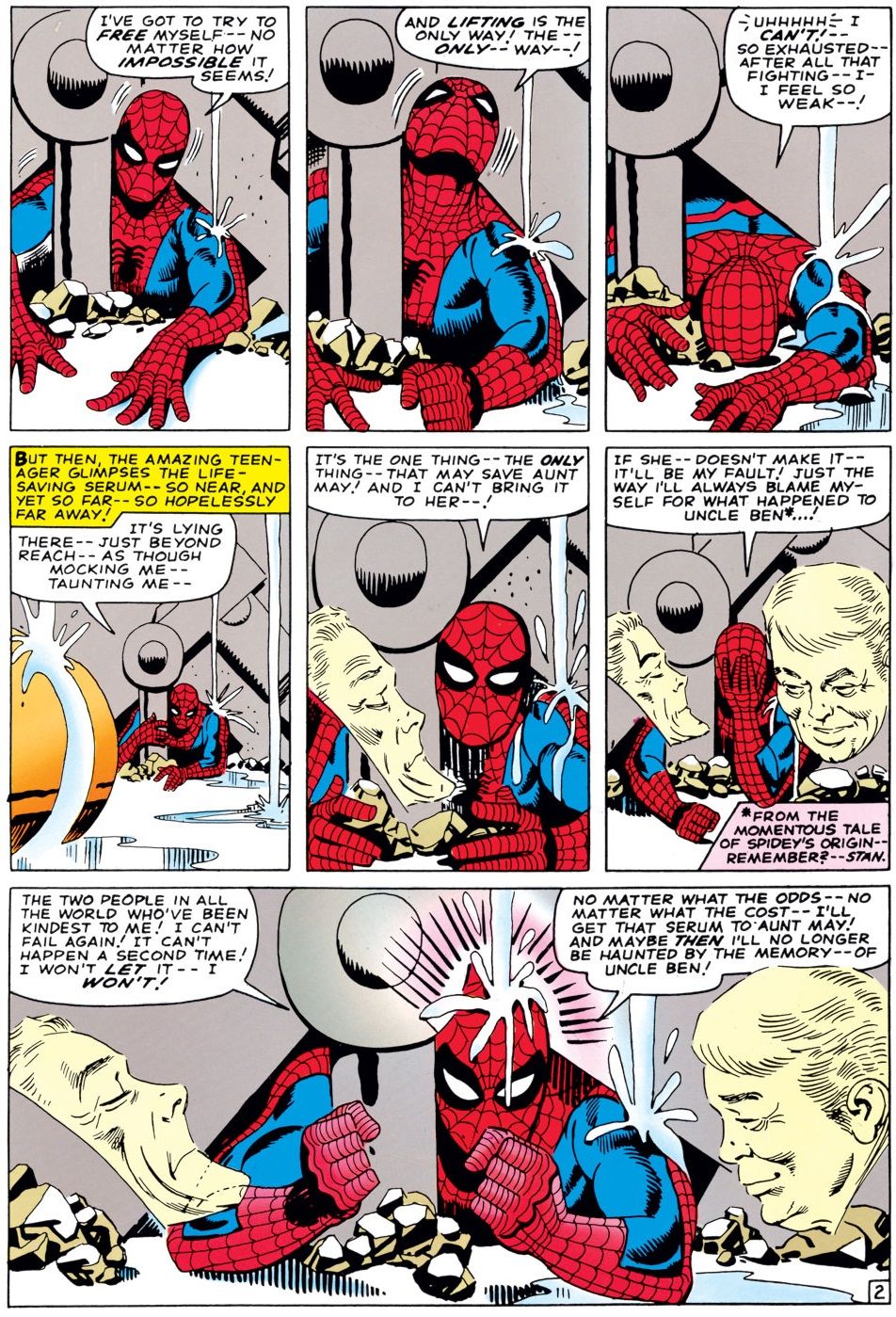 And then we see him almost there… 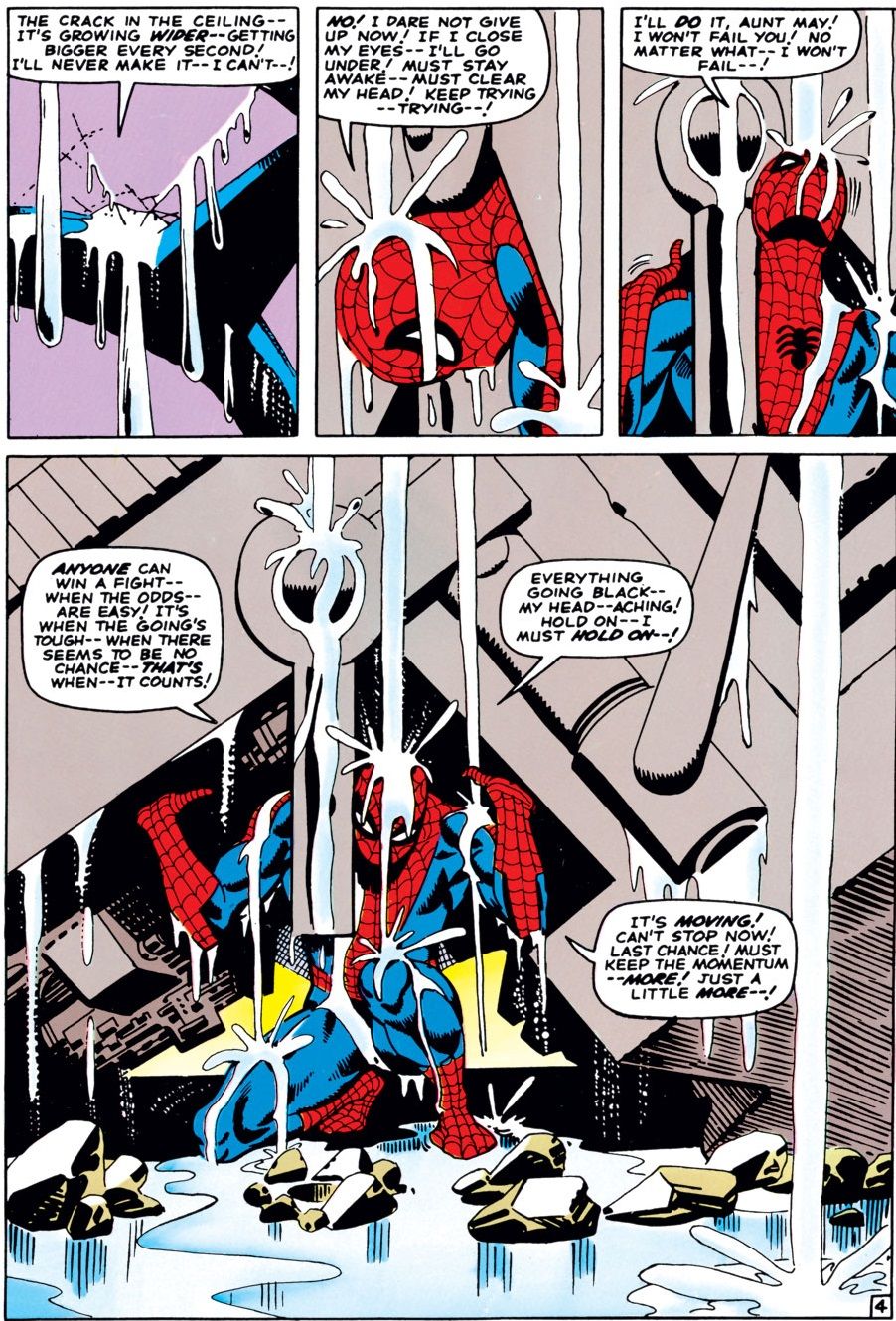 Until he finally succeeds… 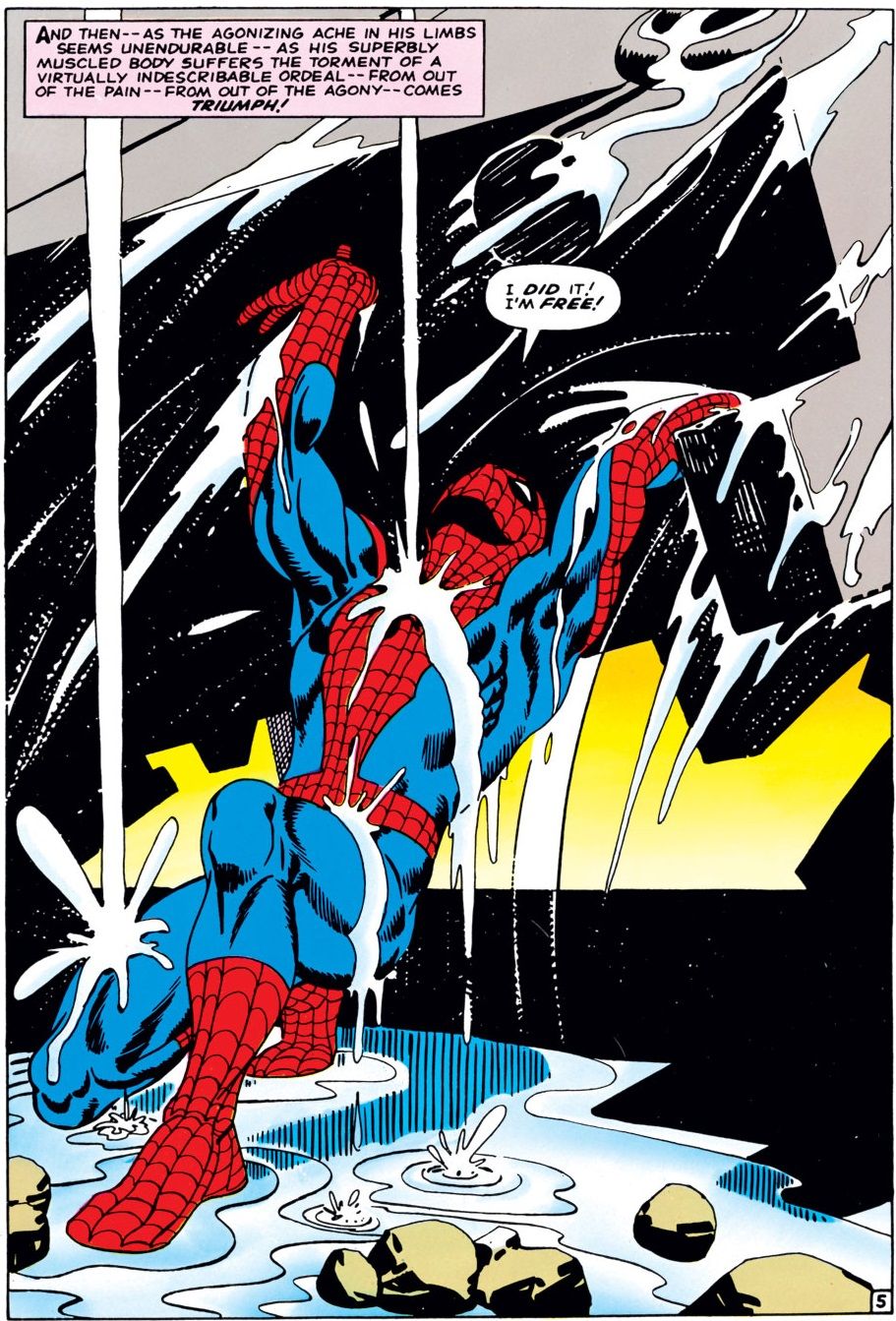 Stan Lee delivers the pathos along with Ditko’s brilliant action sequences. What’s sometimes lost about that sequence is that that was not the extent of what Spider-Man had to do to get to Aunt May. He still had a whole pile of armed guards to defeat, all while injured and having just lifted a whole ton of stuff off of him, so he was exhausted beyond belief, but he just essentially turned his mind off and just starting swinging until everyone was out cold. It was yet another stunning sequence by Ditko right after the previous (more famous) stunning sequence. Ditko was really riding on all cylinders at this point in time.

Peter’s sense of responsibility never had such tangible evidence as this storyline – what he will do to save his Aunt is amazing, or maybe even spectacular!

NOTE: The countdown will be taking a short break for the holiday and will pick back up on Saturday!

Biting Into DC vs. Vampires

Marvel Announces the Return of the Defenders

The Batman: The Origins of Riddler’s Aliases | CBR