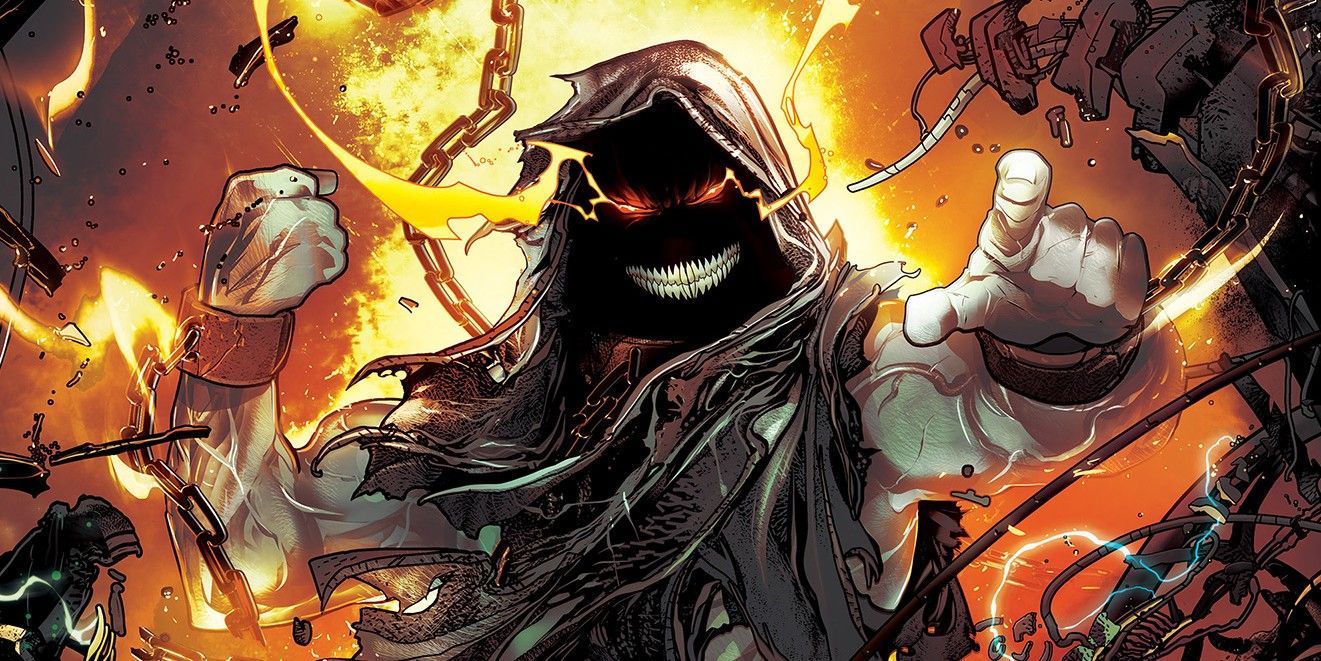 Disturbed, known for blending its Grammy Award-nominated tunes with horror and science fiction sensibilities, recently inspired and helped create a comic book miniseries, Disturbed: Dark Messiah. Published in association with Heavy Metal and Incendium, the five-issue miniseries follows a young firefighter named Griffin DeSanto, who becomes the human host for The Guy and enters cosmic fantasy worlds. From a story developed with Disturbed and Incendium CEO, Dark Messiah is written by Tim Seeley with artwork by Angel Hernandez.

In an exclusive interview with CBR, Seeley shared what led him to craft Dark Messiah, praised his collaborators, and cited which of Disturbed’s mythos influenced the tale. Also included with this interview is an exclusive preview of January’s Disturbed: Dark Messiah #3, written by Seeley, drawn by Hernandez, colored by Fran Gamboa, and lettered by Jacob Bascale. 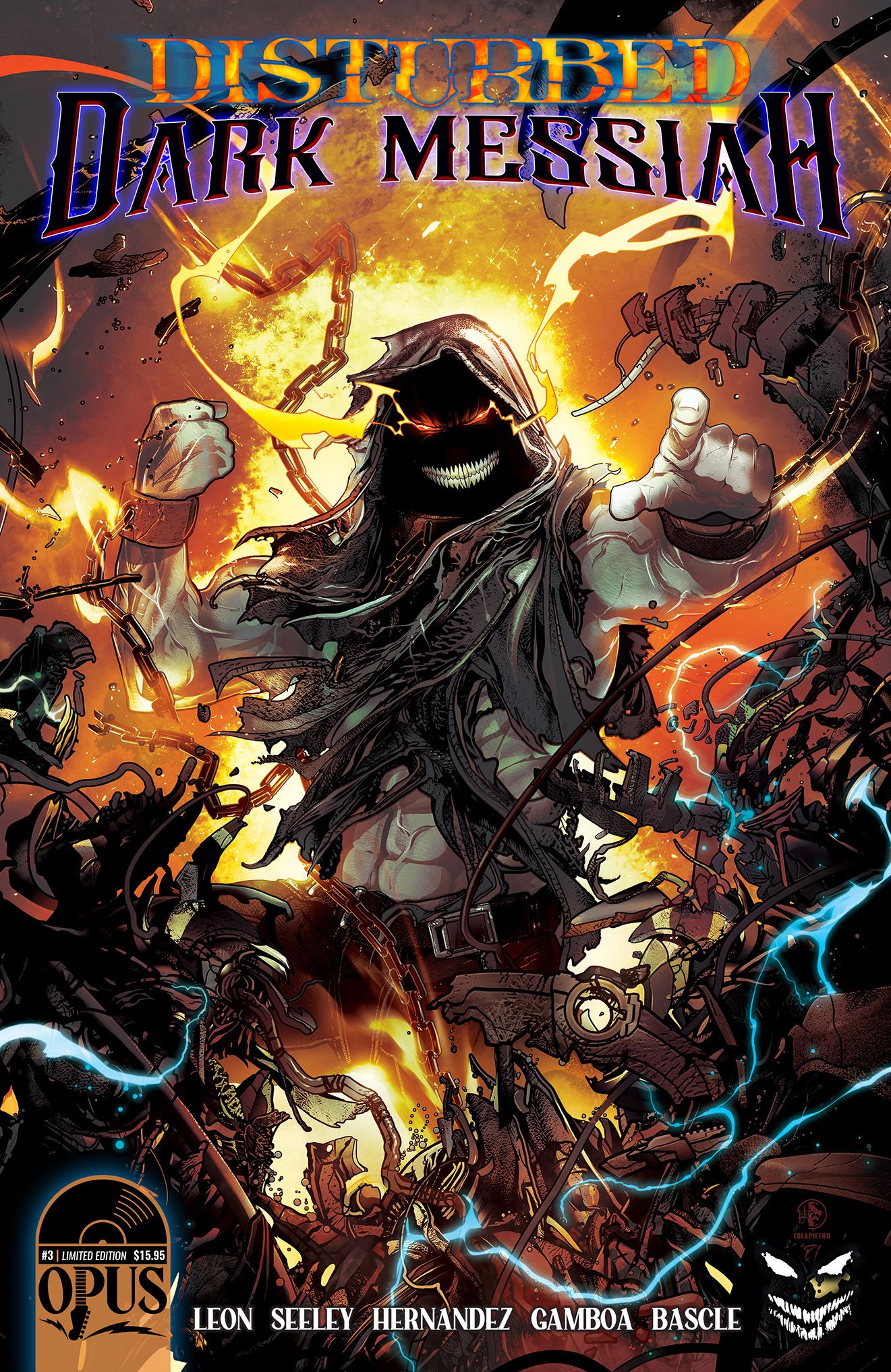 Tim, how did the opportunity to work with Disturbed on a comic book through Heavy Metal and Incendium come about?

Tim Seeley: I was working at Heavy Metal as an editor. I started out as an editor and then I was editor-in-chief and then I was editor again. I phased out because I’m more of a guy who creates stuff rather than organizes, which is just a fact of life. [laughs] I worked with Llexi there and really appreciated the way they ran Incendium. I was already working with Llexi on the Heavy Metal side, so I knew what he was doing and how he was approaching their line of collectibles and tie-in comics and said if they were working on something, I’d be happy to do it.

He had a couple bands that he was thinking about and he mentioned The Guy from Disturbed. I told him to let me know about that one because he looks like my thing — like a ’90s superhero badass horror character which is completely in my wheelhouse. I was happy to pitch for that one. I worked with Llexi on the original outline so I knew what he and the band wanted so it was easy to go into and just provide the cool, visual stuff for the artist to draw.

If there’s a hard rock band out there today with noted comic book influence, it’s The Guy, who’s been drawn by David Finch. How was it creating a sci-fi world and story around this character?

The cool thing is there was a lot of stuff to pull from because there are two specific music videos [I used] — in addition to the band’s lyrics and the stuff they’ve put out like artwork. There are two videos that have pretty solid stories in talking about The Guy, and they are “Land of Confusion,” and “The Vengeful One.” Those two music videos provide a story for The Guy: they’re music videos first, but it’s pretty clear that there’s a plan here. He’s a wrathful god character that comes down from the heavens and does shit [like] taking a human host. I basically went with what I’d seen from those videos, and I took the lyrics and distilled and concentrated them into what I thought was the main thrust of the story.

Llexi and I got together and we pitched some ideas back and forth. We knew we wanted to do a version of the “Land of Confusion” video because it’s such a cool concept and clear story about corruption. That video was made in the early 2000s, so what would that idea look like in 2021? We thought about the tech industry and those entrepreneurs who make a ton of money and, as far as we all know, they don’t choose their power, they get it. What character could we make our antagonist that would also feel very right now?

In talking about protagonists, how did the idea of Griffin DeSanto, this firefighter caught between worlds, come about?

We kicked around a couple of ideas for what the character would be. I had suggested a journalist and we talked about what that would entail. We felt like that was almost too on the nose, especially for a guy who lives in this town that’s facing a lack of public funds, and always running out of money for the things they need, and we’re having a tech company come in and build this corridor and exploit the people and resources for profit. It made sense to have a firefighter, someone who works for the public good. I really wanted to mess around with the idea of saving someone — to save them and wanting revenge. Things that don’t necessarily work together very well. Griffin has this conflict in the entire story whereas he’s being guided by The Guy to get justice, but helping people is not the same as getting revenge or justice. 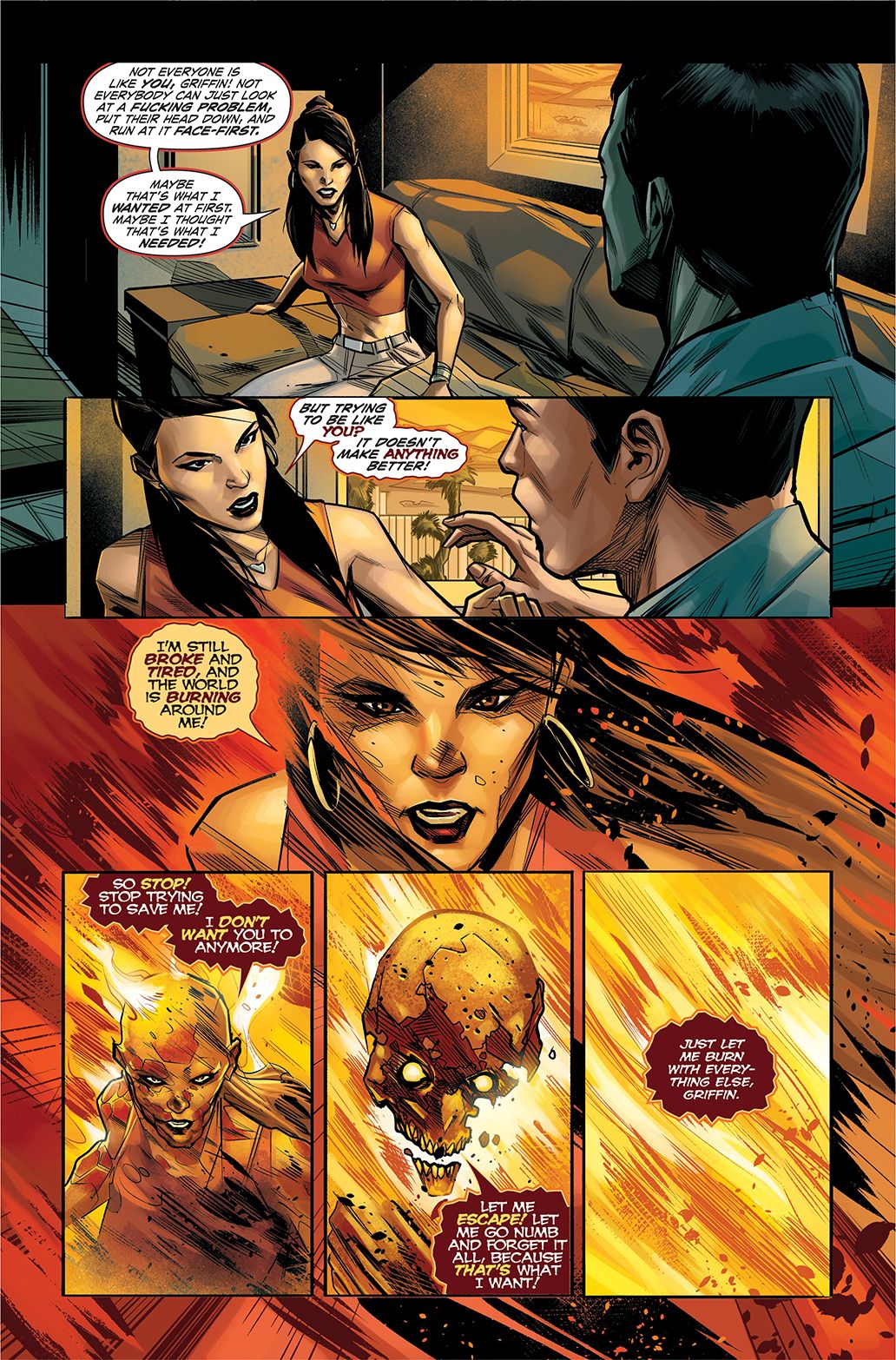 What made Angel Hernandez the perfect artist to bring this story to life?

Llexi was showing me who he was thinking of for this and I went, “Oh yeah, that’s the right person!” It has the gritty, ’90s superhero approach, but this is a guy who is also taking in some modern storytelling approaches. He’s really good at the actual, emotional storytelling beats — not just the flash and big scary and gory stuff but also the little character moments. It’s just a pleasure to let him run with all these designs and he’s equally pulled off the tech side of the visuals and more arcane stuff associated with The Guy and his origin.

With the first issue selling out, and the series off to a strong start, how has the response been from Disturbed?

I don’t want to jinx anything but, so far, there haven’t been any notes. We talk about it enough where I have a pretty good sense about what they want, which is the ideal in any situation like this. I’m not guessing and they don’t respond to it. We talk about it enough and I turn in the script and I don’t get any notes. We just go straight to drawing it. That’s awesome. We’re simpatico in what this is supposed to be about and how it should be told. It’s cool for me just to see them talk about this because metal fans are a very dedicated bunch. 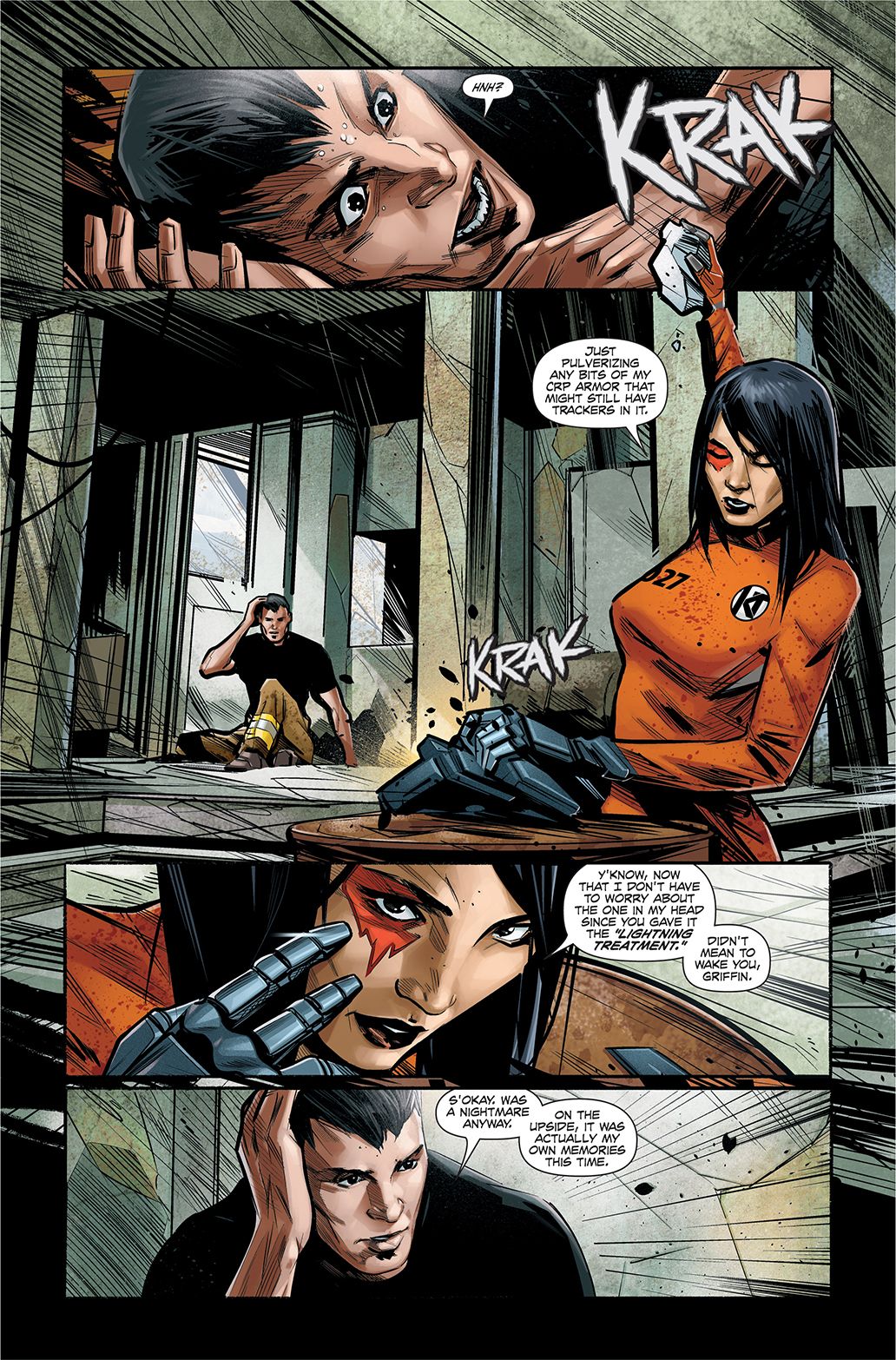 Anybody who puts out anything wishes they had that kind of fandom, that kind of dedication. They’re able to access these awesome people who just instantly show up for anything they want to do, whether that’s a concert or a comic: it’s pretty awesome.

What is it about heavy metal, both the magazine and genre, that lends itself so well to comic book storytelling?

It’s all based on imagination. So much heavy metal stuff is about imagination and emotion which is what we’re trying to do. It happens to be that superhero and horror stuff also works really well with things that are angry, which a lot of heavy metal has been — more modern heavy metal absolutely. It’s about frustration with modern times and that’s  so much of Disturbed. They’re the perfect combination of a social message but also really fun to listen aggressive music. It’s perfect for comics and also what we do: fun, aggressive, and epic stuff. 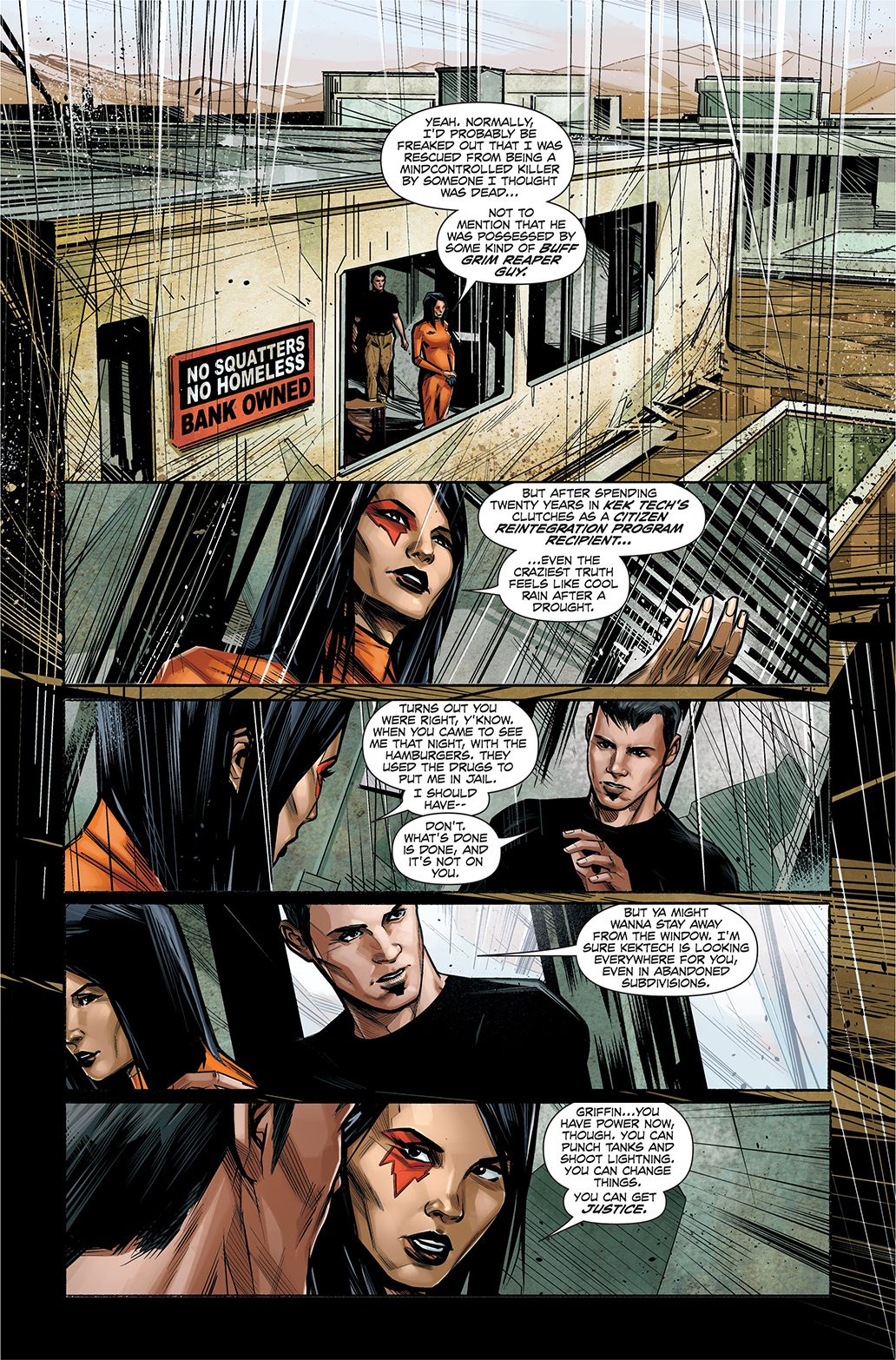 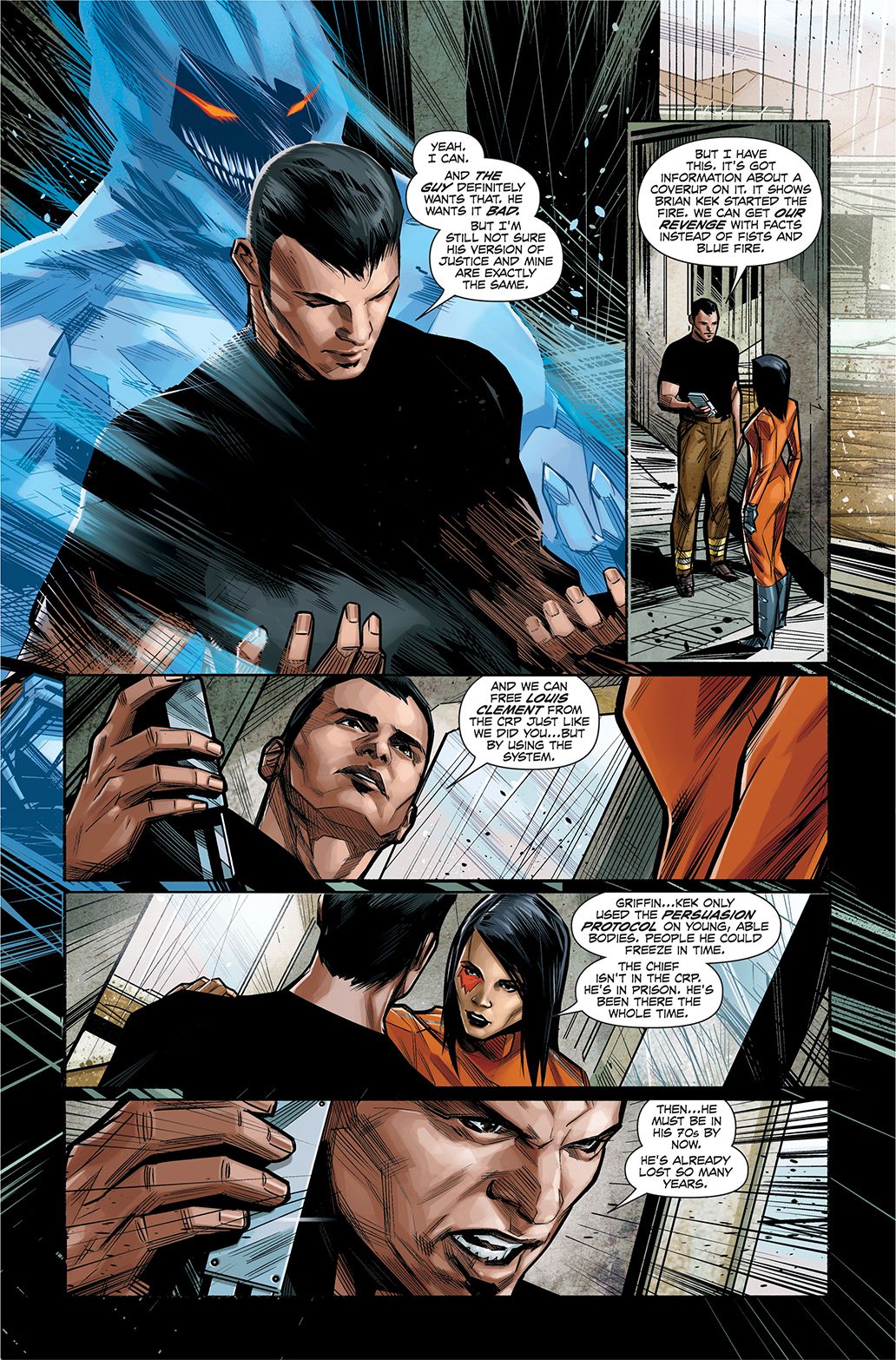 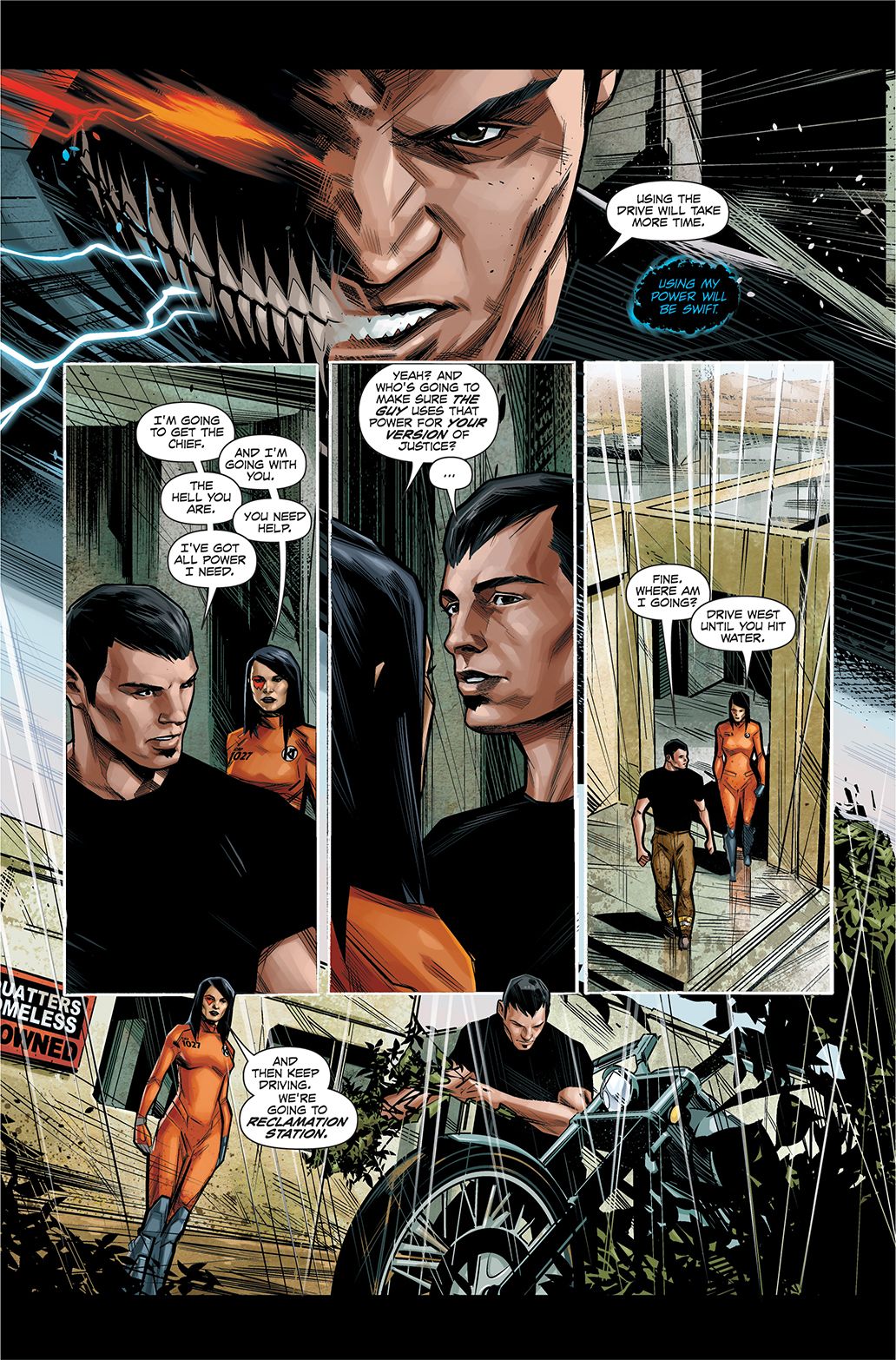 Written by Tim Seeley and illustrated by Angel Hernandez, from a story by Seeley and Llexi Leon, Disturbed: Dark Messiah #3 goes on sale this January from Heavy Metal and Incendium.