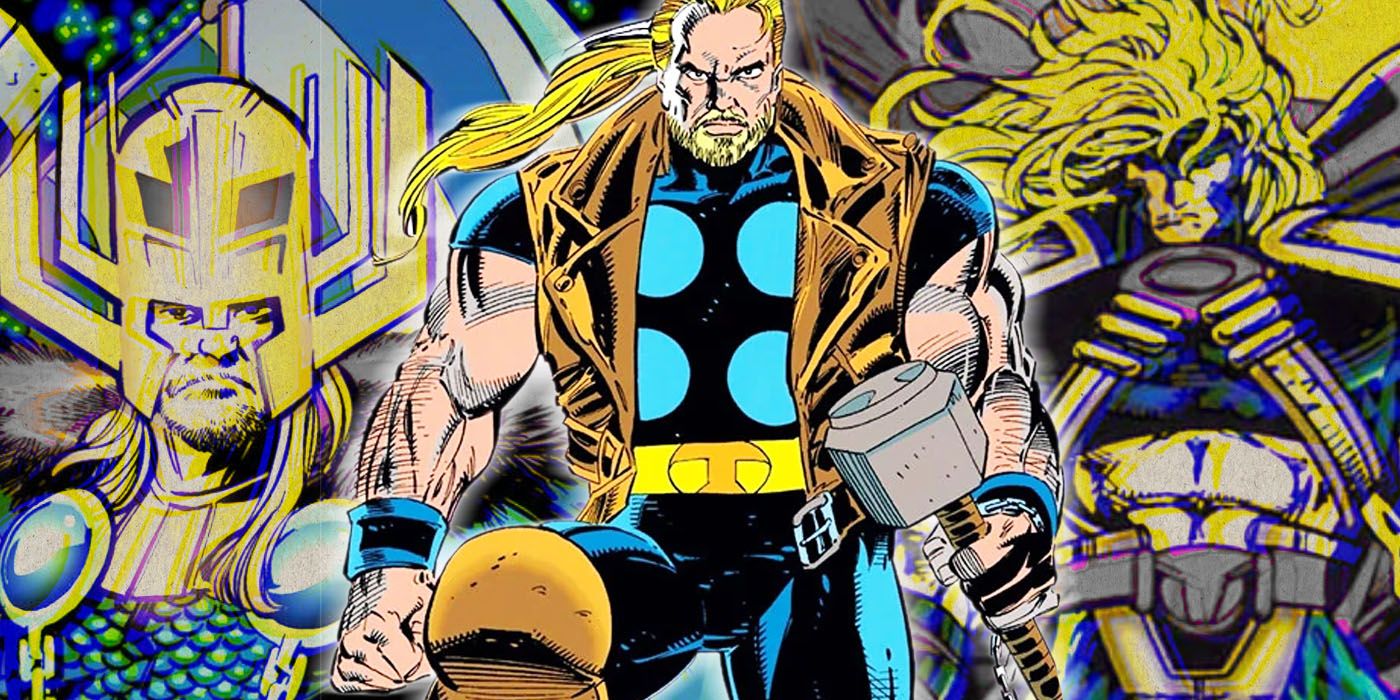 Thor is blessed with a myriad of powers as the Asgardian God of Thunder, and the regal prince of the Aesir has had several royal wardrobe changes over the years. One of these alternate looks is most associated with the hero Thunderstrike, and it’s soon going to be showing up in the Marvel Cinematic Universe‘s next thunder god vehicle, Thor: Love & Thunder.

This costume change wasn’t the only one that Thor had in the ’90s, and it definitely wasn’t the worst. The more street level Thunderstrike look was lightyears better than Thor’s other ’90s duds, which included bare midriffs and a “shirt” shaped like a T. With Thor potentially changing quite a bit in the MCU in the coming years, these suits could show up there. Here’s a look back at them and why they should, or shouldn’t do that.

RELATED: If Shang-Chi Isn’t Marvel New Iron Fist, He Should Be – Here’s Why 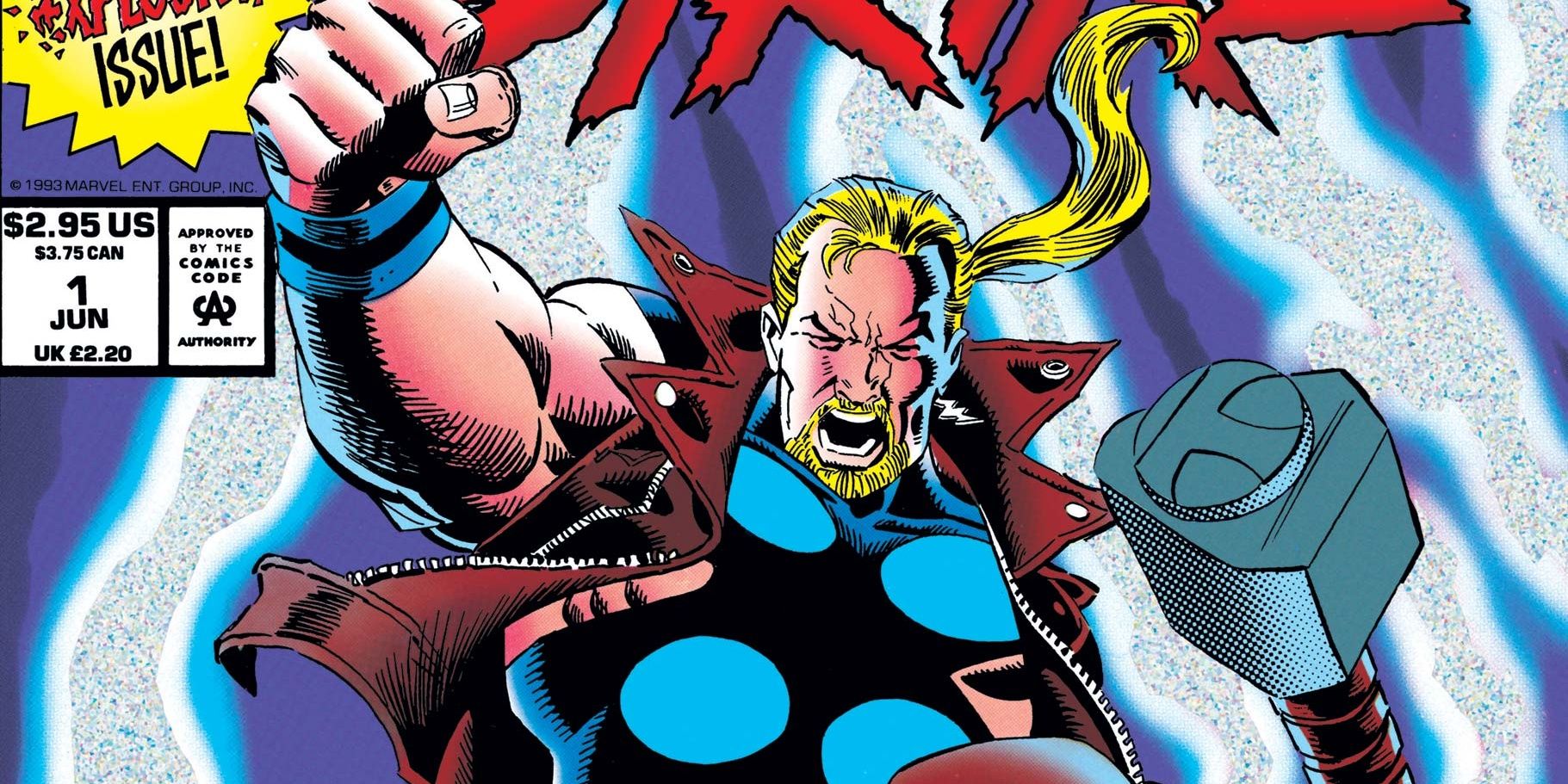 The most well-known of Thor’s ’90s costumes was used by the hero known as Thunderstrike, who was to Thor what Steel, Azrael, War Machine, Artemis and the Scarlet Spider were to Superman, Batman, Iron Man, Wonder Woman and Spider-Man.

This trend of usually edgier, more “from the streets” counterparts to familiar heroes reached all the way to Asgard, but lo and behold, the result was divine. Thunderstrike was just ’90s enough to seem cool and revitalize the stagnant mythos of the God of Thunder, and his suit actually foreshadowed how Thor would look in the Ultimate Universe. 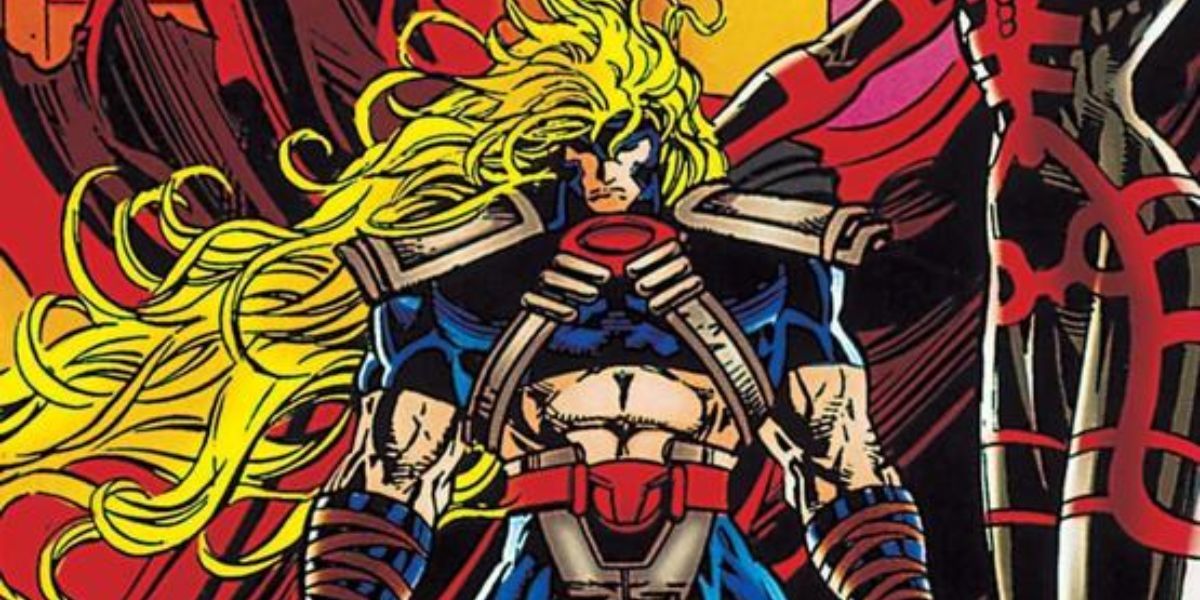 The same can’t be said for Thor’s other new suits, however. One of the more infamous ones is the “bare midriff costume that appeared in the last issue of Thor’s book before it became Journey Into Mystery. This suit looked like the worst Heavy Metal Magazine design ever, giving Thor a hilariously bad looking exposed midriff as if he were a teenage girl.

There was even a prominent codpiece-like element, making the suit even more laughable. There was no explanation for this new look, and it was quickly forgotten after Heroes Return. It did, however, show up in the Marvel vs. DC crossover book, where Thor battled DC’s Captain Marvel/Shazam while wearing the embarrassing suit. 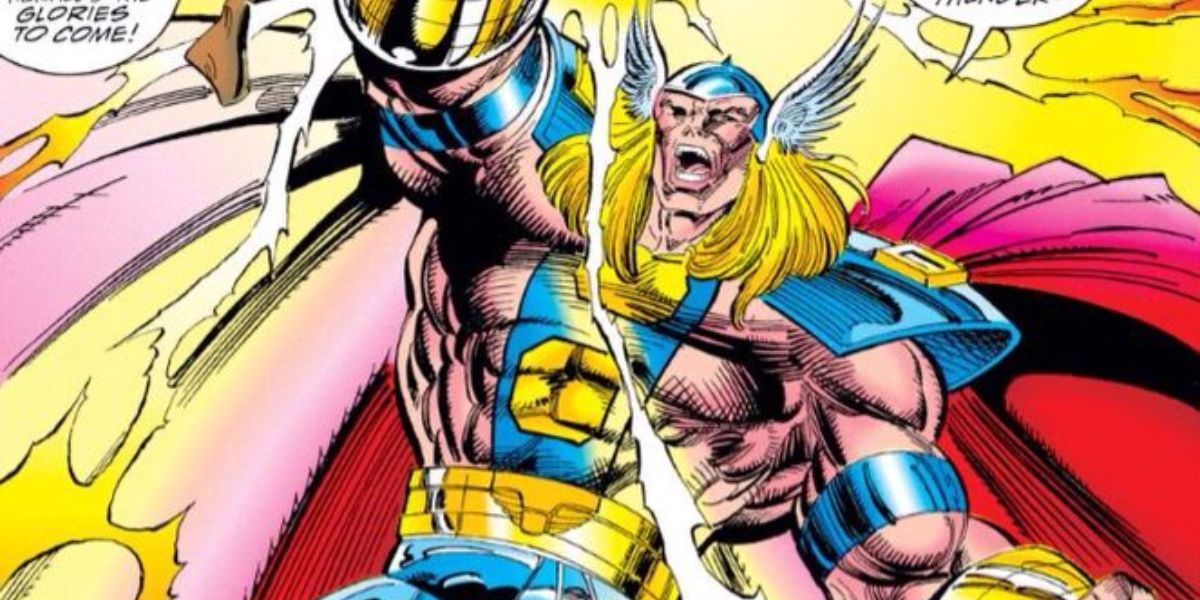 Another horrible Thor costume was used when he briefly joined a team known as the Godpack. This suit was more classic in design than the bare midriff suit, and didn’t look bad from the neck up or waist down, depending on the artist.

The problem was that Thor’s shirt was suddenly in the shape of a T/hammer, making him look like a rejected wrestler. The gigantic shoulder pads, which were very “of the time” also gave it a unique flourish, not to mention a memorable one… though perhaps not for the best reasons. 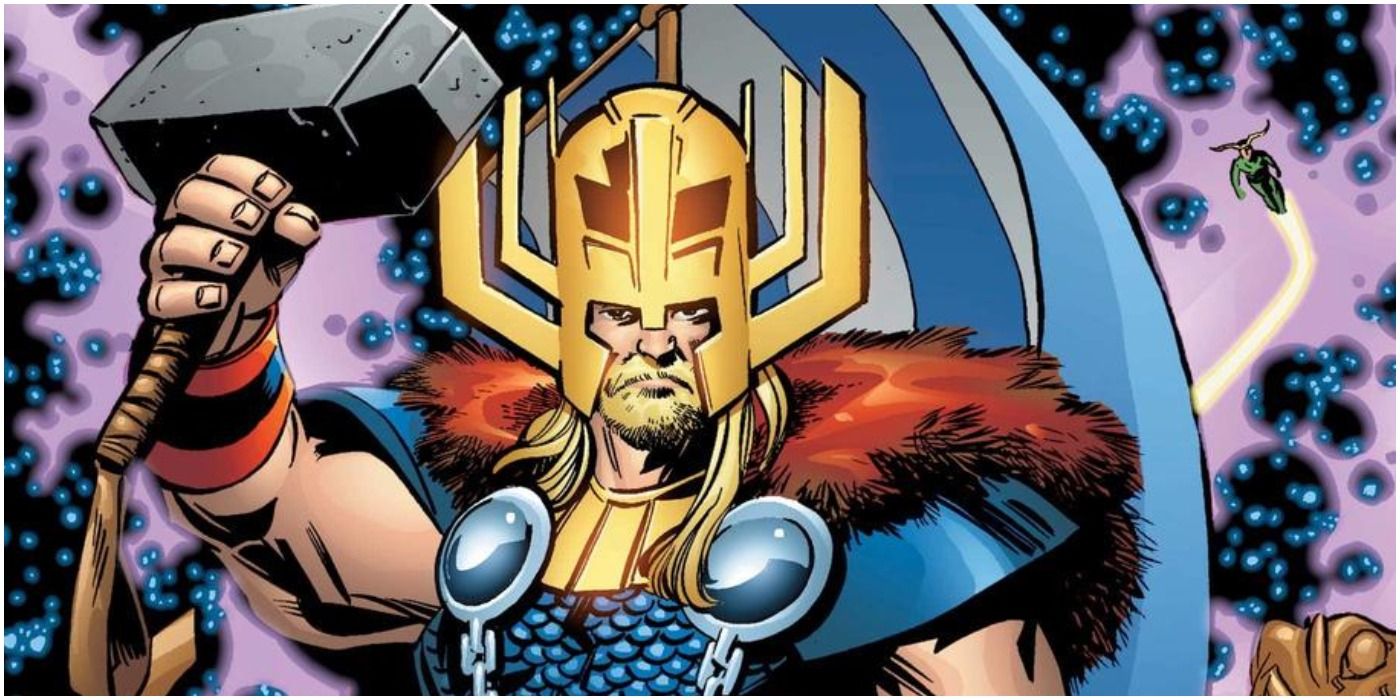 The last awful costume, which sadly almost works, is the ’90s King Thor design. This costume looks pretty much identical to Thor’s typical look, but his “crown” in this case is a positively odd looking helmet that resembles a golden version of Galactus’ head.

Despite the name, the King Thor look was anything but regal, and instead made Thor look like a, at best, a part-time cosmic god cosplayer, and at worst, something of a joke.

As mentioned, the Marvel Cinematic Universe seems to already be using a version of Thunderstrike’s costume, which makes sense as it’s one of the few redesigns of Thor that actually work. Any of these other ’90s looks, however, should be avoided at almost all costs. Even with the MCU embracing comic book costumes more than anyone else, there are many characters who still look way different than they did when they debuted in the comics. For instance, Hawkeye was wisely given a look more reminiscent of his Ultimate universe counterpart than his garish classic costume. In other words, if it already looked bad in the comics, it can only look worse in live-action.

One way to slyly get away with introducing some of these terrible designs might be for Thor to try out different looks alongside Jane Foster. As he cycles through them, entries could include the golden Galactus helmet (which could even help setup up the villain in the MCU), the Godpack shirt and the bare midriff costume. After being laughed at by Jane, he could finally decide upon the Thunderstrike look, with perhaps a throwaway joke about him looking like an Asgardian trucker. In the end, none of these costumes beyond Thunderstrike should be taken seriously, and they’re easily some of the worst threads to ever grace the nine realms.

KEEP READING: How Did Thor and Hulk’s Steamy Romance End… or Did It?