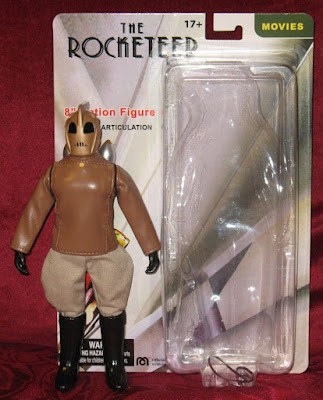 Hard to believe that The Rocketeer movie came out 30 years ago, the character having debuted a mere nine years earlier as a back-up tale in the pages of Starslayer #2.  Created by the late Dave Stevens (who sadly died at the ridiculously young age of 52), the complete eight chapters have been reprinted in various editions (that I know of) down through the years, and at least one of those volumes belongs in every true comics fan’s collection.  (And a deluxe 40th Anniversary Artist’s Edition is due out in April 2022.)
Regarding the movie, I’ve only ever seen occasional bits of it on TV, never the full shebang, but one day I intend to sit down and watch it from beginning to end.  I already have a Rocketeer figure which came out around the time of the film, but I recently bought this Mego figure ‘cos I thought it was a neat looking item.
Only one problem: the straps which attach the rocket pack to the figure are of a barely stretchable flat plastic and are difficult to get the arms into without them digging into the tunic’s sleeves.  Each loop needs to be half-rolled over them, which results in the plastic becoming twisted in places, and I was worried that this procedure might eventually damage the fabric of the tunic, if not snap the straps.
So what was the solution?  I carefully removed the original straps (without breaking anything – that’s the two-loop [single piece of] plastic you can see at the bottom of the clear display ‘case’) and substituted a softer black elasticated cord which allows me to affix the rocket pack with no difficulty or risk of damage to either the cord or tunic.  Who’s a clever boy then?  (Now feed me some Trill.)
My collection of Mego figures is coming along nicely, and another one (this time from America) should be arriving in a couple of weeks or so.  Can you guess who it is?  Don’t worry if you can’t, he’ll be revealed on the blog when he arrives.  Can’t wait ’til he gets here.
Anyway, below is the cover of one of The Rocketeer collections I mentioned.  Do yourself a favour and track down a copy as soon as you can.  You’ll love it. 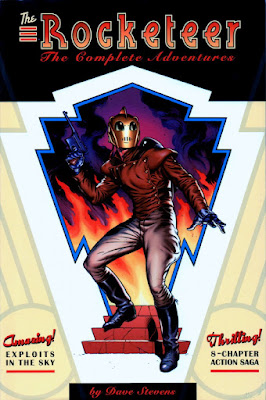 Hawkeye Set Up This Avengers Crossover and We All Missed It