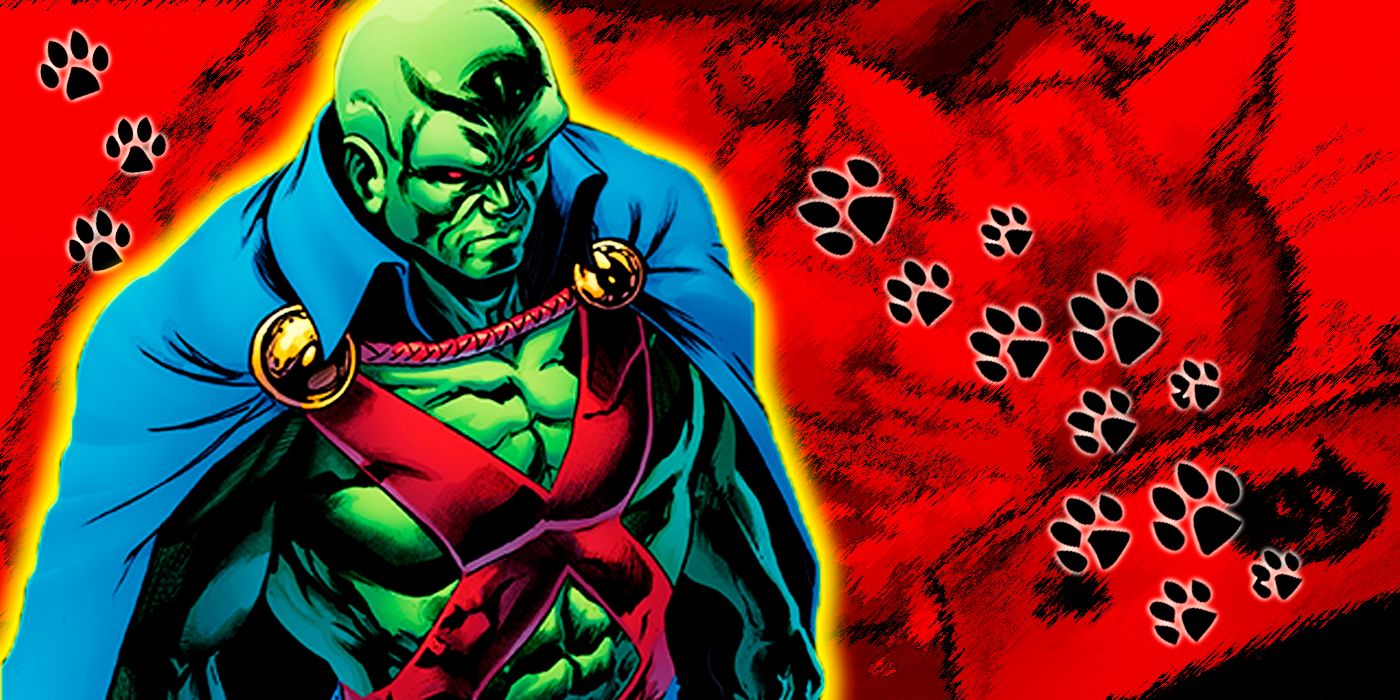 In Action Comics #1037 by Phillip Kennedy and Daniel Sampere, the first part of a six-part story featuring J’onn Jonzz, the Martian Manhunter, written by Shawn Aldridge, and art by Adriana Melo, has begun, and it has introduced readers to the Justice Leaguer’s new home in Metropolis as he adjusts to life in the big city.

However, the green Martian was not the only character that fans are excited to see, as the backup feature introduces a new and adorable companion for the last Martian. “Double Stuff” is J’onn Jonzz’s new pet cat, named after his favorite variety of Oreo cookies. If you’re not sick already with how cute the name is, join us as we explore why the name makes sense for the pet of DC’s number one Oreo fan.

Related: Justice League: Every Way Martian Manhunter Came Back from the Dead 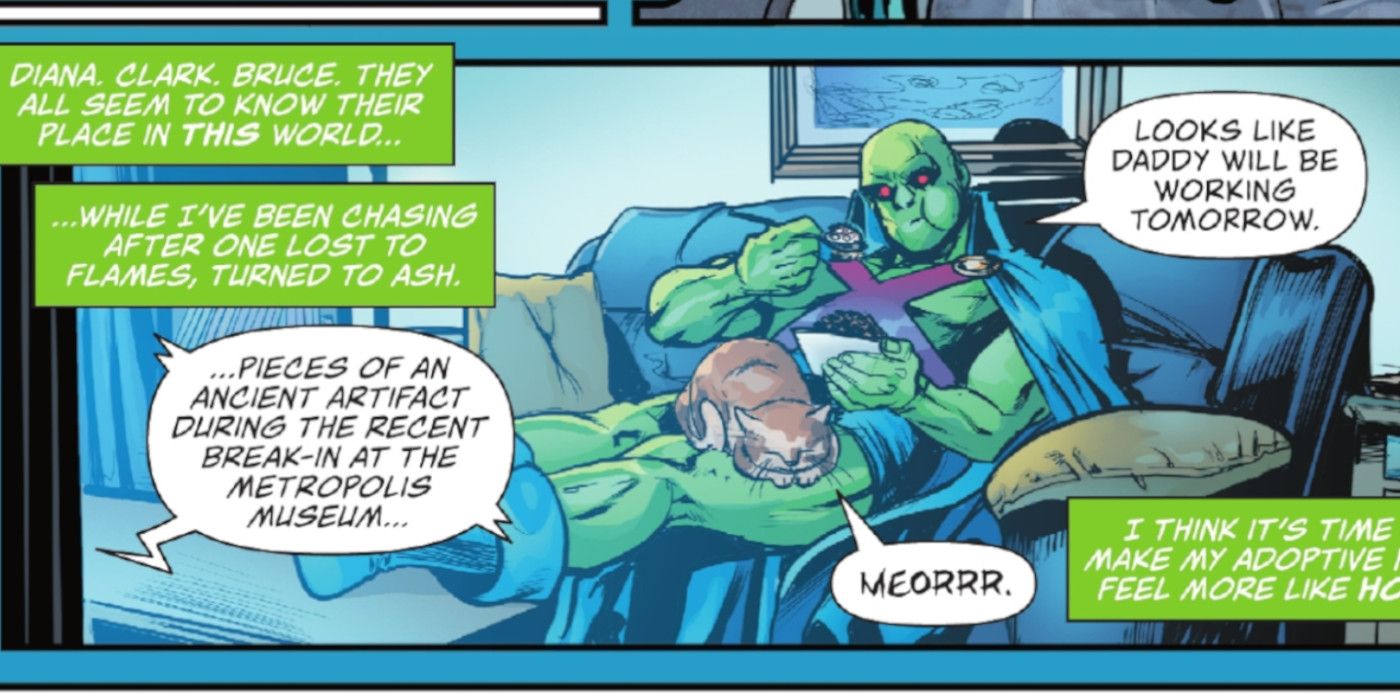 The story begins with J’onn walking home to his apartment in Metropolis, showing various human forms that he has been using when entering the apartment in disguise. When he arrives, we are introduced to Double Stuff as J’onn ponders over his past aliases on Earth such as John Jones, Bloodwynd, Isobel de la Rosa, and the time he even disguised himself as a cat. While watching television with Double Stuff, J’onn hears news reports of pieces of ancient artifacts being stolen in the Metropolis Museum and goes to investigate the following day.

While admiring a painting by Kyle Rayner on display at the museum, the Manhunter meets with the museum director. They inform J’onn that the events are strange, as the thief of these artifacts is only stealing individual pieces of the “Idol Head of Diabolu” (an ancient Babylonian statue commanded by the wizard Diabolu, a reoccurring nemesis of the Manhunter back when the character headlined House of Mystery back in the 1950s). When J’onn mentions he is familiar with the relic to the museum curator, they are all of a sudden stopped by his old nemesis: the Human Flame.

Back when the backup feature was announced, Shawn Aldridge promised that the story will be “f***ing weird”. By bringing back the obscure Idol Head of Diabolu and giving J’onn a companion named after his favorite snack, it looks like the writer is keeping true to his word. Despite how strange it may seem, “Double Stuff” is actually the perfect name for J’onn’s cat, as the fan-favorite character has an often joked about relationship with Oreos, which has become a central facet of his identity over the last 30 years. 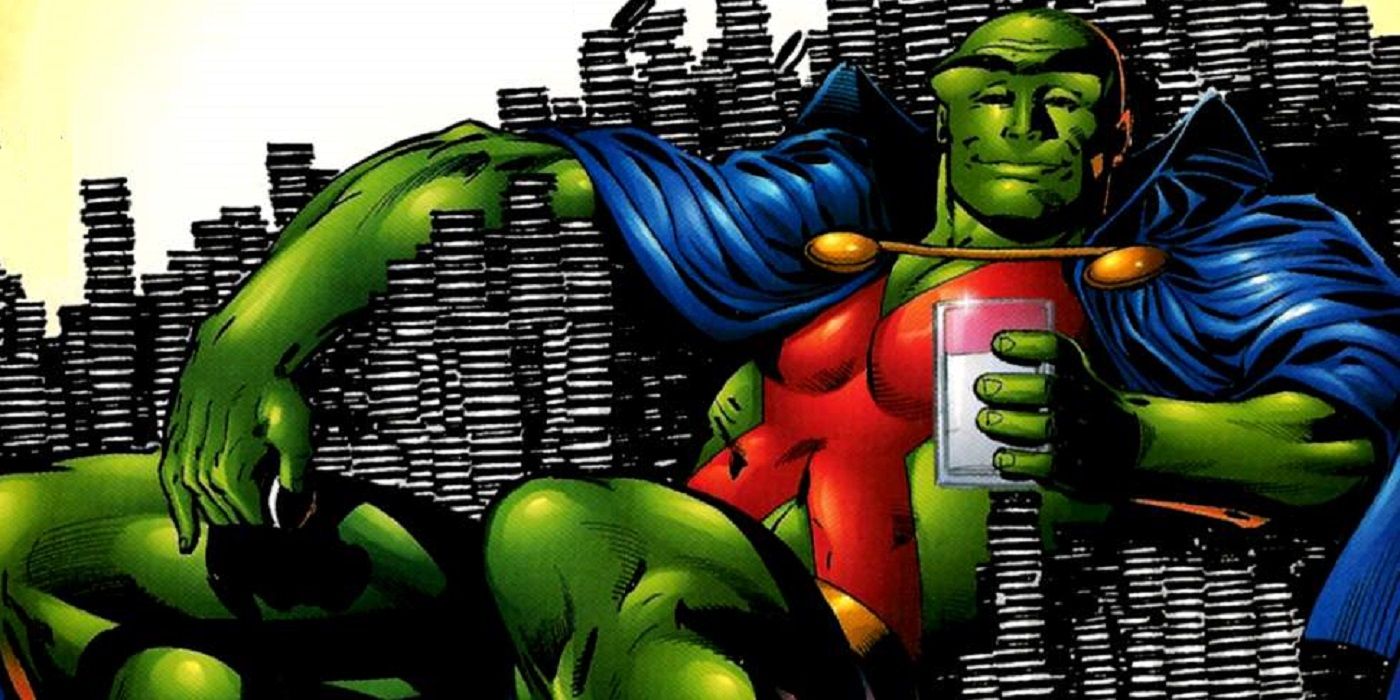 The Choco obsession would have an entire issue dedicated to it in Martian Manhunter #24 by John Ostrander, Doug Mahnke, and Patrick Gleason. The story revolves around J’onn going berserk after Booster Gold and Blue Beetle stole every Choco J’onn had in the JLI Embassy. During an intervention, Batman and J’onn revealed to the other Leaguers that the ingredients in the cookies do something to Martian physiology, explaining why J’onn becomes so addicted to the sugary treat. The fascination is further emphasized after J’onn was killed in Final Crisis and Bruce Wayne left a Choco on J’onn’s tombstone as a parting gift to his old friend.

With such an extensive history to the point that he is frequently associated with the cookie, it is no wonder that J’onn would name his cat after his favorite type of Oreo. While the name may seem cute to the point of barfing rainbows for some, Double Stuff’s name highlights a key part of J’onn’s character, and his strange connection to humanity and tender moments like this highlight why the character is such a fan-favorite among the DC pantheon.

ReedPop takes on the challenge of E3 – but can they make it work?