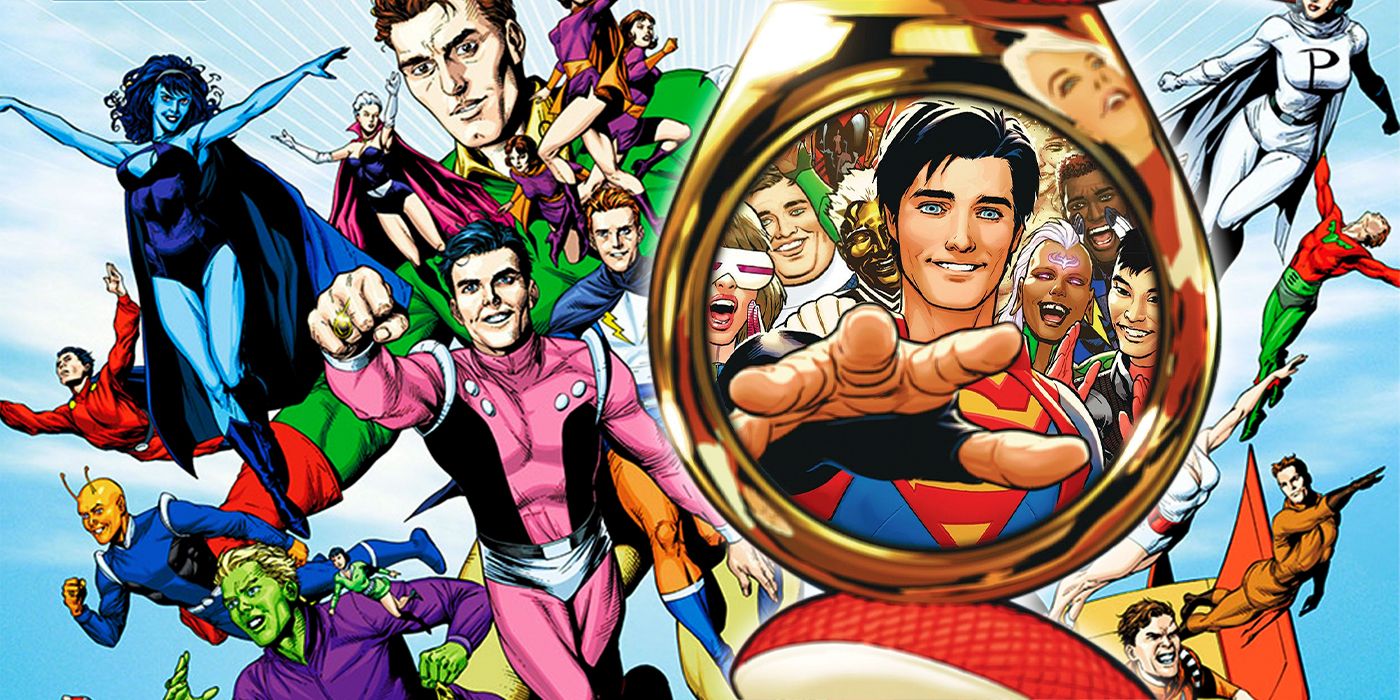 Today, learn the bizarre and short-lived explanation for why the Legion of Super-Heroes kept calling themselves “Boy” and “Girls” even after they had all seemingly grown-up a lot.

In every installment of “If I Pass This Way Again,” we look at comic book plot points that were rarely (sometimes NEVER!) mentioned again after they were first introduced.

I have another feature called “Always Kind of Wondered,” which is about instances from comics where a comic book writer has clearly said, “Hey, why doesn’t Character X ever do Action Y?” The sort of things that typically occur when comic book fans grow up to become comic book writers. And had this Legion revelation stuck, I probably would have used that category, but since it didn’t, I think it belong here. And also, honestly, I really don’t think anyone seriously WAS questioning this particular thing in the comics, to be frank.

Anyhow, to set the scene, Paul Levitz was in his early 20s when he wrote Superboy and the Legion of Super-Heroes #235 (with art by Mike Grell and Vince Colletta. Levitz was on the young side of the so-called “second generation” of comic book writers that I write about a lot, the people who came in having grown up reading comic books and thus they had perspectives based on having had comic books in their lives, unlike the first generation, who grew up on pulp fiction and comic strips. Levitz, for instance, was a decade younger than Marv Wolfman and 15 years younger than Roy Thomas. Levitz, though, was and still is an extremely astute observer and a student of comic book history and so it was totally natural that he had a thought that he wanted to see addressed in the comics, even if that thought was…

The answer was provided in this issue, but nearly every other later writer tended to steer clear of it after Levitz revealed it here. Levitz opened up the issue with a typical Legion-style opening, with a Legionnaire in seeming agony, only this time, the scene was played straight, as Superboy actually WAS being sent through a brainwashing machine at the start of the story! 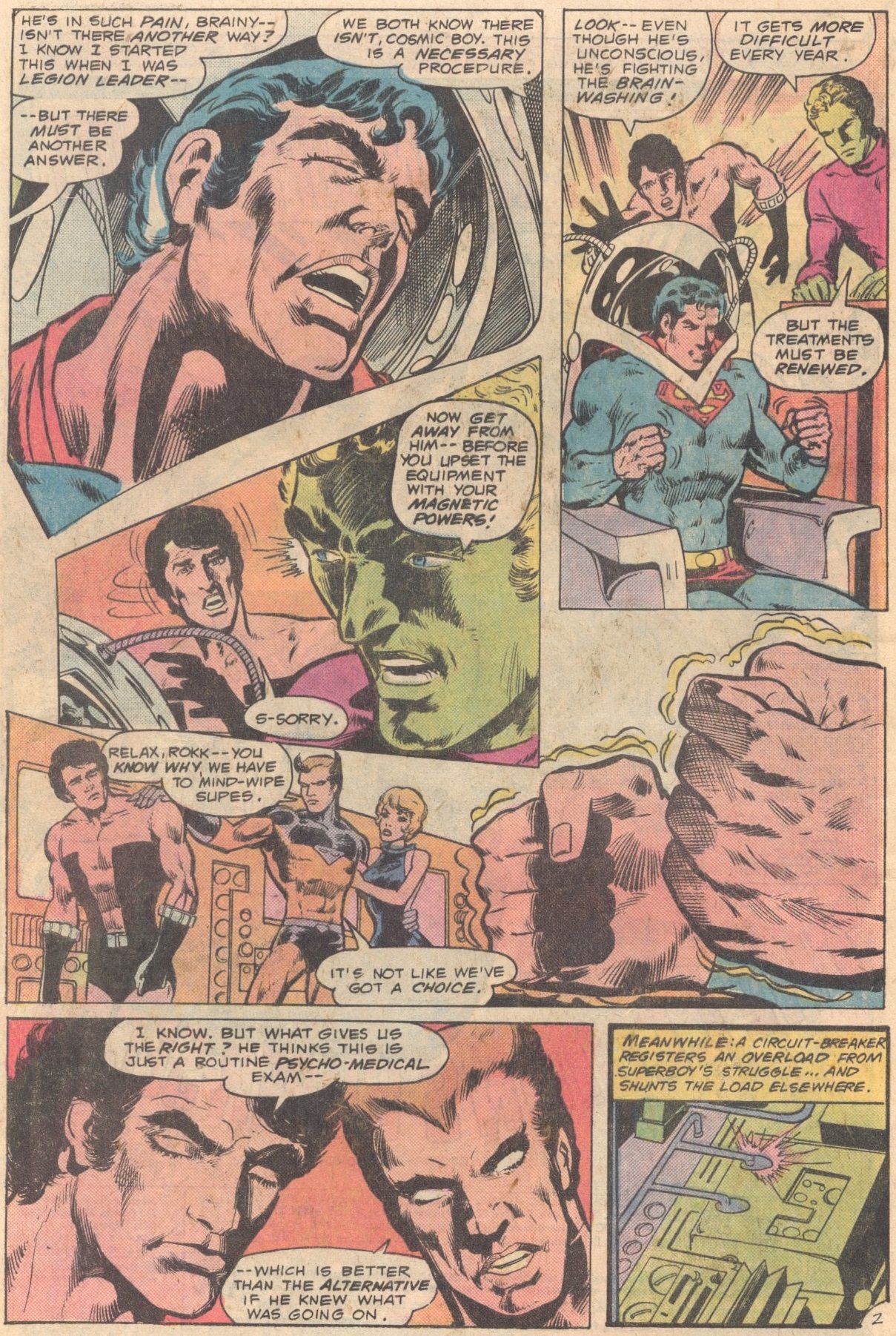 A lot of these stories had those classic Superman-style deceptive covers. You know, like Superman’s disconnecting Lois Lane’s oxygen supply while she’s in outer space…but it’s because it was damaged and he replaced it with a better one! Stuff like that. Levitz, though, plays against type and goes with an accurate cover.

However, the Legion is called to alert during the middle of the operation, so Superboy’s brainwashing didn’t hold, which, of course, freaks Brainiac 5 out… 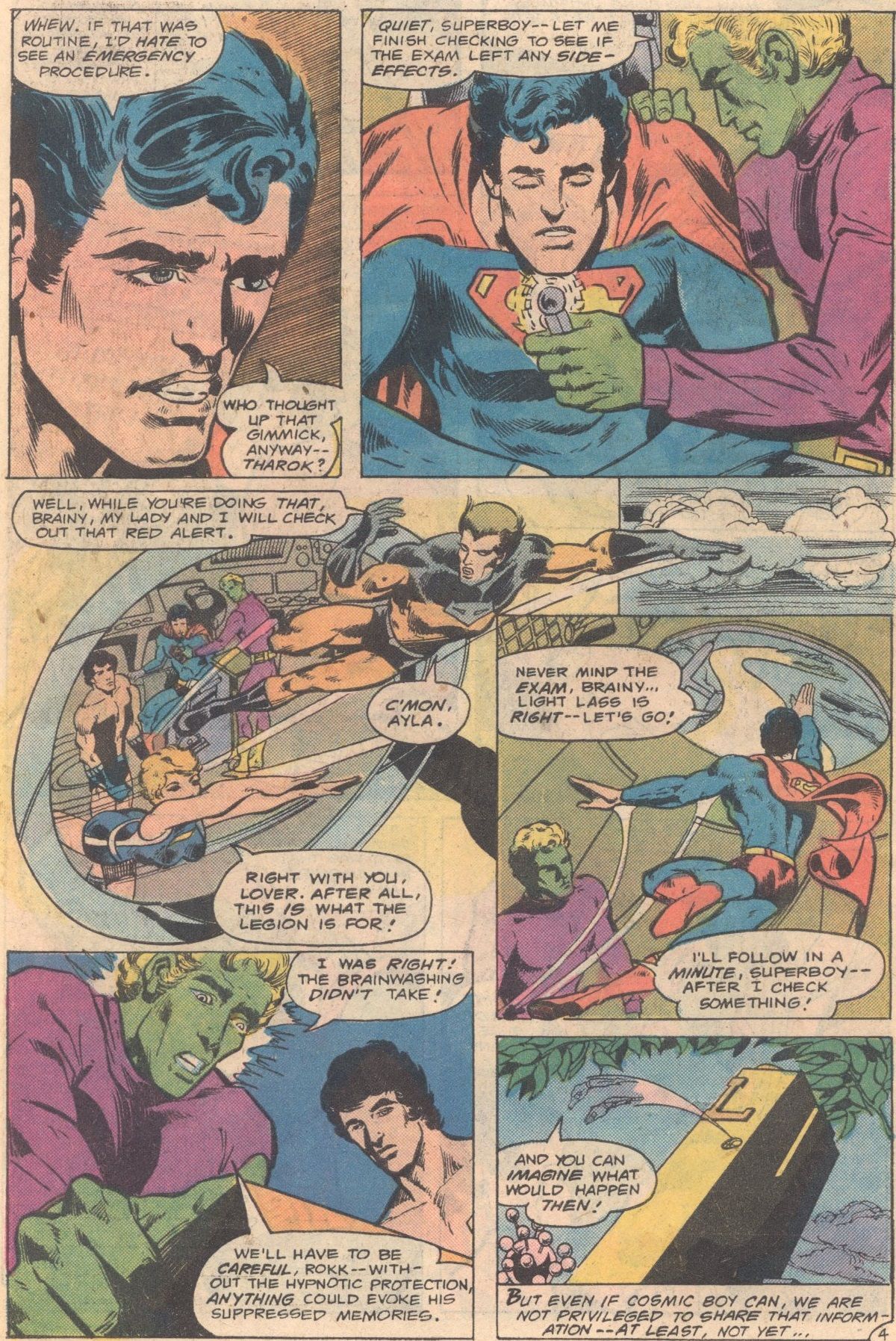 Here, Levitz is playing towards an actual Legion tradition, which is one Legionnaire doing something shady and another Legionnaire thinking the worst of them, but even here, Levitz plays against type a bit by having Superboy get that Brainiac 5 MEANS well, but he is still unsure whether he wants to trust that Brainiac 5 is correct in his estimation. In other words, while he will concede that Brainiac 5’s motives are pure, it doesn’t mean that he is thinking clearly and Superman might not be willing to go along with the Legion’s decision to, you know, BRAINWASH HIM CONSTANTLY!

RELATED: Eternals’ Sersi Almost Had a Romantic Fling With Another MCU Avenger

Superman slowly discovers that the secret involves an organization called the Life Institute, which people are surprised that Superboy has never heard of, as apparently it is a bit of a big deal in the future. There is also a fascinating subplot where it turns out that the bad guys that the Legion have been fighting throughout the issue are from a planet that wants access to the technology of the United Planets, including that from the Life Institute and Brainiac 5 informs them that they cannot access it yet as they’re not developed enough. It would be like giving monkeys laser rifles (he uses a slightly less offensive analogy). It’s an interesting question, really, of whether they’re being fair or not, especially when you learn what kind of really cool stuff that they’re hiding from the “lesser” planets.

Once that’s finished, Superboy discovers the secret they’ve been hiding from him. The future has mastered artificial life! That is what the Life Institute has developed. 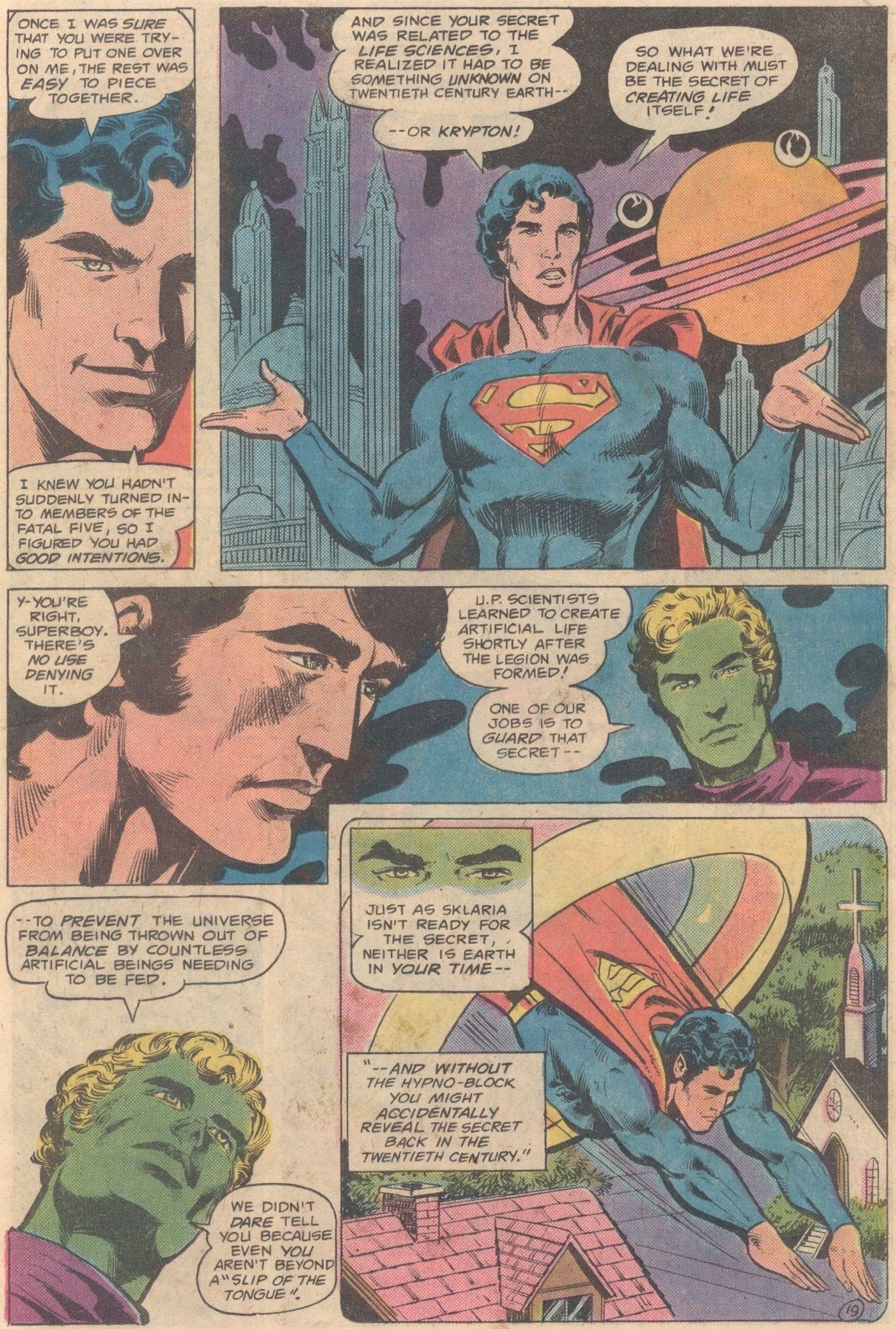 Superboy promises to keep the secret hidden and says they can brainwash him when he returns again to make sure he doesn’t get tempted to mess with his time period with this new knowledge. But as he leaves, we learn the REAL truth, they actually have conquered AGING! 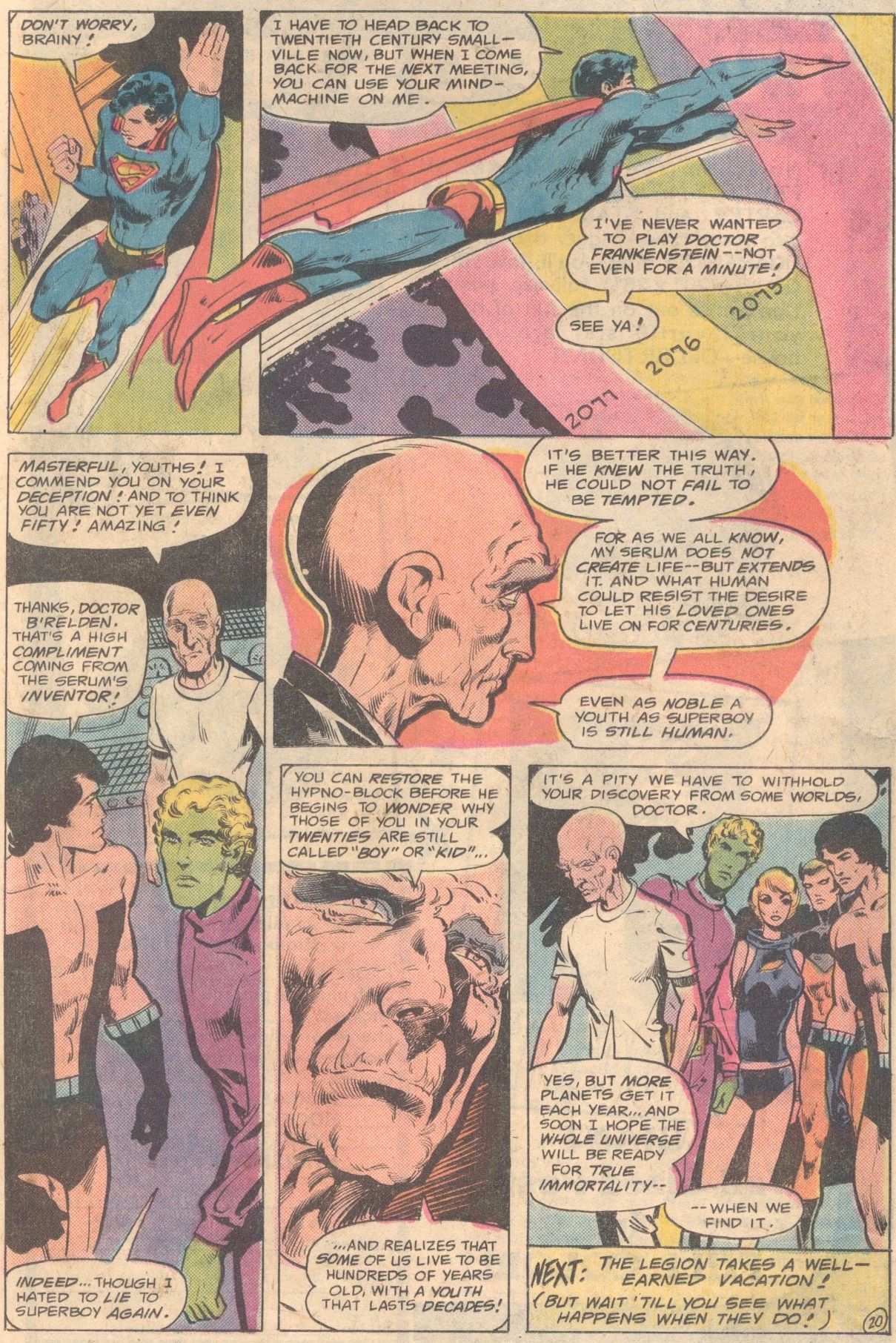 Yes, due to the Life Institute, human life is now so long-lived that they now consider anyone under the age of 50 to be a “child,” or a boy or a girl, etc. which is why all of the Legionnaires still use those names despite being at least in their 20s by now. The odd aspect of this is that it is reliant upon the Legion not trusting that Superboy would be willing to avoid using the long-life elixir on his family back home. They sure don’t think much of Superboy’s integrity, huh? Also, “Sorry, lesser planets, you can’t be immortal like us, because you’re not developed enough to be worth immortality!”

As you might imagine, this new explanation for why the Legion was called “Boy” and “Girl” were not picked up as a regular idea in the comics, despite Levitz going on a long run as the writer of the series a couple of yeas after this, so you would think that he would the ability to make it a confirmed aspect of the series if he really wanted to.

If anyone else has a suggestion for a future If I Pass This Way Again, drop me a line at brianc@cbr.com

KEEP READING: An X-Men Villain Forced the Eternals Into a Team That’s Too Strange for the MCU