The Joker has undergone significant change over the course of his history, but one thing that a lot of modern fans might not know is that he was genuinely terrifying dating all the way back to day one. His first appearance in Batman #1 makes no qualms when it comes to portraying him as a remorseless killer, taking the haunting visual imagery from director Paul Leni’s silent masterpiece The Man Who Laughs (1928) and twisting the once-heroic jester portrayed by Conrad Veidt into a murderer with a penchant for elaborate showmanship.

In the comics of the mid-’50s, the Batline had been steered away from the occasionally grisly content of the early days towards more family-friendly fare in response to the birth of the Comics Code. Likewise, the campy fun of Batman ‘66 had become the definitive take on the character in popular culture. Regardless, the Joker has more or less remained a horror across the decades, and when writers began once more to embrace mature themes, he was one of the first to step up the brutality. The Joker: Clown Prince of Crime

(1975) shows us a criminal mastermind with a callous disregard for life, regardless of whether or not Batman happens to be around to see it or not. 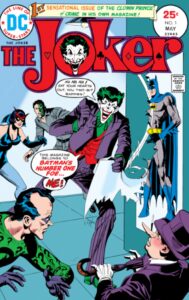 The Joker #1, written by Denny O’Neil, cover art by Dick GiordanoWHAT EVEN IS THIS COMIC?

This series is a bit of an anomaly. Running for nine issues (with a recently-printed tenth issue that spent decades unread in a drawer somewhere), the series removes Batman and sets our jester loose on the rest of the DC Universe. The result is a bizarre, silly, and occasionally terrifying read.

Many of the things that the mid-’70s version of the Joker represented have been more or less phased out of the character by now, but that isn’t entirely the case. This era gave us an exceptionally violent and incredibly petty man at war with the entire world, fighting villains and heroes alike. This reflected the intentional move away from Batman ‘66 hijinks and towards the grimmer tales of the ‘80s. In some ways, this is a kinder, gentler Joker, committing relatively benign art heists and showing up in bizarre disguises to prank hero and villain alike. In others, this is a return to the most disturbing parts of his character as he creeps on women and manipulates everyone around him for reasons that are at best murky.

Far from the “working class criminal” takes, this era of the Joker often leaned into a sense of haughtiness that would imply a college-educated or even aristocratic background. He quotes Cyrano de Bergerac in the first few pages and repeatedly insults the intelligence of the people around him, whether they be fellow inmates or random passersby on the street. The Royal Flush Gang can’t hope to keep up with him on an intellectual level, which is a major part of why he keeps them around. 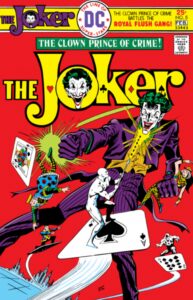 The Joker #5, written by Martin Pasko, cover art by Ernie ChanTHE JOKER VERSUS

The series pits Joker against a number of surprise villains, with the first issue opening on a prison break in which the villainous Senor Alvarez chooses to free Two-Face while leaving Joker behind. He needs Gotham’s real greatest villain, leaving the Joker to stew in his cell. Readers know that this one-off villain more or less just signed his own death warrant, but this leaves the Joker to escape for himself via blowing up an escape balloon.

This issue sets the tone for the series as quirky guest-stars and zany hijinks intersect with jarring physical violence. Joker fills a pie with acid and throws it in Alvarez’s face as a penalty for underestimating him. Much of the issue shows the Joker attempting to get one up on Dent, who he considers to be predictable and dull, but the villains are more or less equally matched. At one point, Two-Face attempts to literally saw the Joker in half, making it clear that despite the time period this was released in, there is little hesitation to leap into full-blown violence.

The second issue is a mostly forgettable story about a one-off villain called Willie the Weeper, who the Joker appears to as a friend and then double-crosses. (ED: Curiously, this issue was the only one to be adapted into a story for Batman: The Brave and the Bold

, fittingly renamed “Joker: The Vile and the Villainous.”) The third features a genuinely great crossover with the Creeper, who is being accused of a crime that the Joker committed. This leads to some incredible fight scenes between those two, a relatively unnecessary case of amnesia and mistaken identity, and a strange parody of Charles Schultz and his Peanuts, appearing here as Sandy Saturn and Cashews. 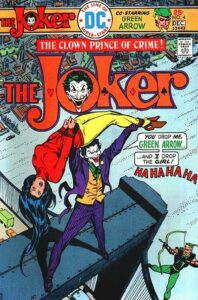 Appearances from Green Arrow and Black Canary are the theme of issue four, though this leans into Joker as a creep towards women and so isn’t all that fun to read. Likewise, Dinah appears on the cover under threat of being hurled to her death while Green Arrow threatens to shoot Joker and is more or less a sexy lamp throughout the story, so not a good one for Women’s Lib all around, folks. The fifth issue is a relatively straightforward art heist story featuring the unfortunate Royal Flush Gang, who are easily tricked into taking the fall for the Joker yet again.

The creative team changes throughout its nine (ten, technically) issues, so it might go without saying that this is more a disjointed collection of random stories that may or may not have happened in continuity than it is a cohesive story with an overarching vision. Still, that’s not to say that there isn’t fun to be had, it’s just an inconsistent read. Yet, anyone who misses the days of the Joker just hauling off and doing random crimes with no concern for who gets caught in the crossfire will love this bonkers series, and there are moments of true brilliance. For instance, the fight with Sherlock Holmes. 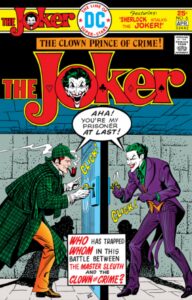 This issue is written by Denny O’Neil and is dedicated to “the master of mystery, Sir Arthur Conan Doyle!” by the creative team, and so, as one might expect, the nods to Holmes’ mythos are everywhere. Still, even if you’ve never read a Sherlock Holmes story in your life, this issue is just weird and fun. The actor Clive Sigerson plays Holmes in a play, but after the Joker hits him over the head with his stage prop pipe, an amnesiac Sigerson comes to believe that he truly is Holmes. Naturally, his next assumption is that the Joker is Moriarty, and the two engage in a battle of wits. As a big fan of Doyle’s work, Joker bends over backwards to recreate some of the more infamous crimes of the Holmes series, though, of course, he ultimately trips himself up and is taken out by Sigerson and his friend “Dock” Watson. Easily the highlight of the series, this is the moment when the seemingly disparate themes all lock in and become a camp masterpiece, showing us a Joker who is a bit of a fanboy at heart and shedding new light on his obsession with Batman.

The last issues delve further into the psychological terrors of the DC Universe, first with a story that will today read as fairly ableist in which Lex Luthor becomes “infected” with the Joker’s “madness” when they swap personalities via a ray. Obviously, this concept is absolutely absurd, and it is mostly an exercise in establishing the major personality differences between two of DC’s greatest pre-Crisis threats. Issue eight is a surprising delve straight into the realm of horror as the Scarecrow makes an appearance, marking the first time that Joker and Scarecrow ever appeared in a comic together. 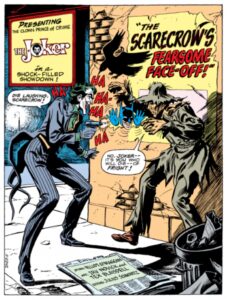 Issue nine features a chaotic but fairly entertaining fight against Catwoman when Joker and a one-off character named Benny Springer find themselves in a conflict over a “priceless cat” questionably named Hiawatha. Cases of mistaken identity continue to be a theme as “Batman” shows up on the scene only to be quickly discredited by Catwoman, who knows that he is an imposter.

In trade collections, #9 is the final issue of the series, but in 2019, a secret tenth issue saw the light of day. This story, intriguingly titled 99 and 99/100% Dead, shows the Joker making short work of the Justice League. Trapped in Arkham under threat of a lobotomy, the Joker makes a deal that trades his soul to the suspiciously Elton John-esque Lou Cipher. After beating the League and killing his doctor, the issue cliffhangs on a story about the Joker’s father that will likely never be explored. The series ends with the Justice League tied to a table, but from all we know, that seems to have worked out okay for them, making this story read like a bit of a fever dream. 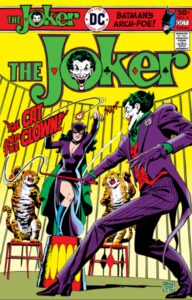 This series is a strange little artifact that will be worth checking out for any Joker fan curious about the character’s changing personality over the years. As with many comics of the era, there are parts that absolutely do not hold up. Yet, it does walk the tightrope of being both amusing and unsettling throughout.

Clown Prince of Crime doesn’t give us much of a deeper backstory for the character, but it does show him in action, ruthlessly exploiting the people around him and engaging in inventive criminal activities laced with enough malice to give even the most jaded reader pause. Though it lacks cohesivity, this is a must-read for any comics fans that are looking to bridge the gap between the campier side of the character and pending stories like A Death In The Family

, in which the Joker appears completely out of control. This Joker is funny but murderous, sympathizing but callous, and his ability to change personalities to fit the situation is the scariest thing about him. In the end, this is a key part of the Joker’s evolution.

The post The Joker’s “Last” Laugh In The Clown Prince Of Crime appeared first on Comic Book Herald.