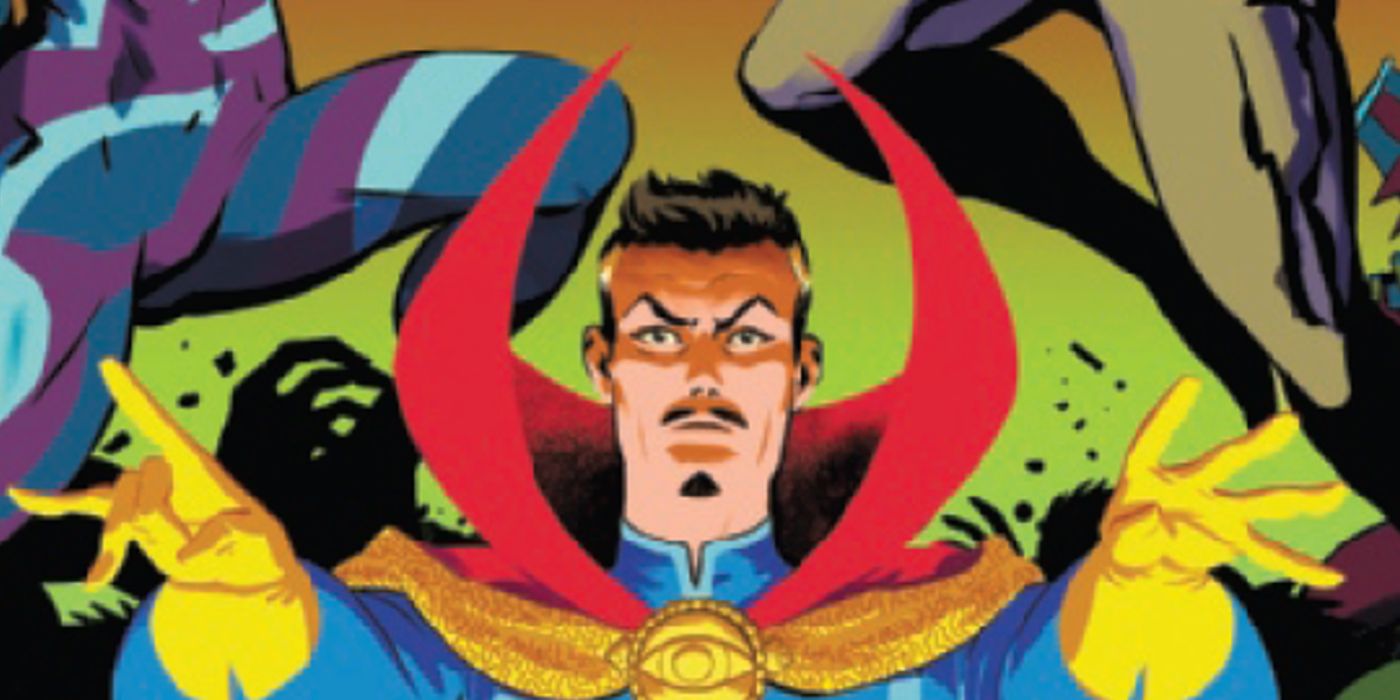 Doctor Strange‘s latest lineup of Defenders have traversed time and space in their hunt for the mad scientist Carlo Zota, coming face-to-face with some of the most awe inspiring and fear inducing figures of the Marvel Universe. Now, in the midst of the Fourth Cosmos, these heroes have been given a new understanding of their own places in the universe thanks to an enigmatic entity. As it turns out, the embodiment of the Fourth Cosmos is more important than anyone could have guessed, though not nearly as mysterious.

The team’s exploits have seen them overcome the scientific and mystic horrors of the Sixth and Fifth Cosmos before being greeted by the mind boggling landscape of the Fourth. This world is one filled with endless landscapes that have become battlefields filled with unyielding armies that are simultaneously alien and all too familiar. Cartoonish figures that resemble vague iterations of Marvel’s most iconic figures do battle with one another before having their attention drawn to the threat posed by Carlo Zota in their own realm. Together the heroes don’t just defeat Zota, they unleash the manifestation of the Fourth Cosmos itself, bringing the Pilgrim into full view for the very first time in Defenders #4 by Al Ewing, Javier Rodriguez, Jay Bowen, VC’s Cory Petit, and VC’s Joe Caramagna. 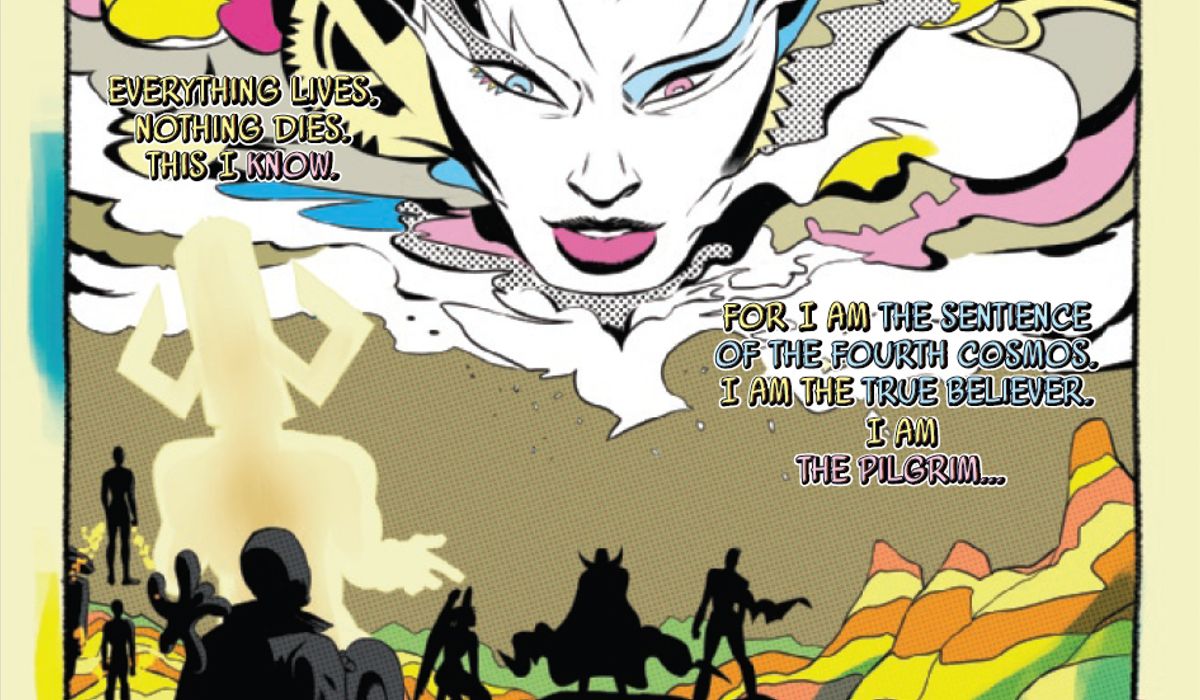 Though the Pilgrim has never been seen before, their role in the history of the cosmos has been known since 2017’s Ultimates 2 #100 by Al Ewing, Travel Foreman, Filipe Andrade, and Marco Lorenzana. Like each iteration of the Multiverse, the Pilgrim was born from the death of the Third Cosmos as part of the cyclical nature of existence itself. Also known as the True Believer, the Fourth Cosmos has been described by its ethereal brethren as one who “journeyed into mystery,” and it seems that every tongue-in-cheek reference to the medium in which it exists has come full circle in the most blatant ways possible.

Apart from the artistic changes that take place in this issue, shifting from a more typical comic book format to one that is overtly antiquated, the Fourth Cosmos even beckons the Defenders through the panels of a comic book page before helping them to continue in their hunt for Carlo Zota. All of this is in a bid to ensure the survival of the Pilgrim’s archetypes, the prototypical versions of the heroes all Marvel fans know best, which would now appear to be the Fourth Cosmos’ contribution to existence as science and magic were of the Fifth and Sixth respectively. The concepts of legacy and archetypes are ones that have become increasingly important in the Marvel Universe as of late, especially throughout Jason Aaron’s run on Avengers by way of the Stone Age Avengers up through their modern day counterparts, so to see where all of that began is truly remarkable. 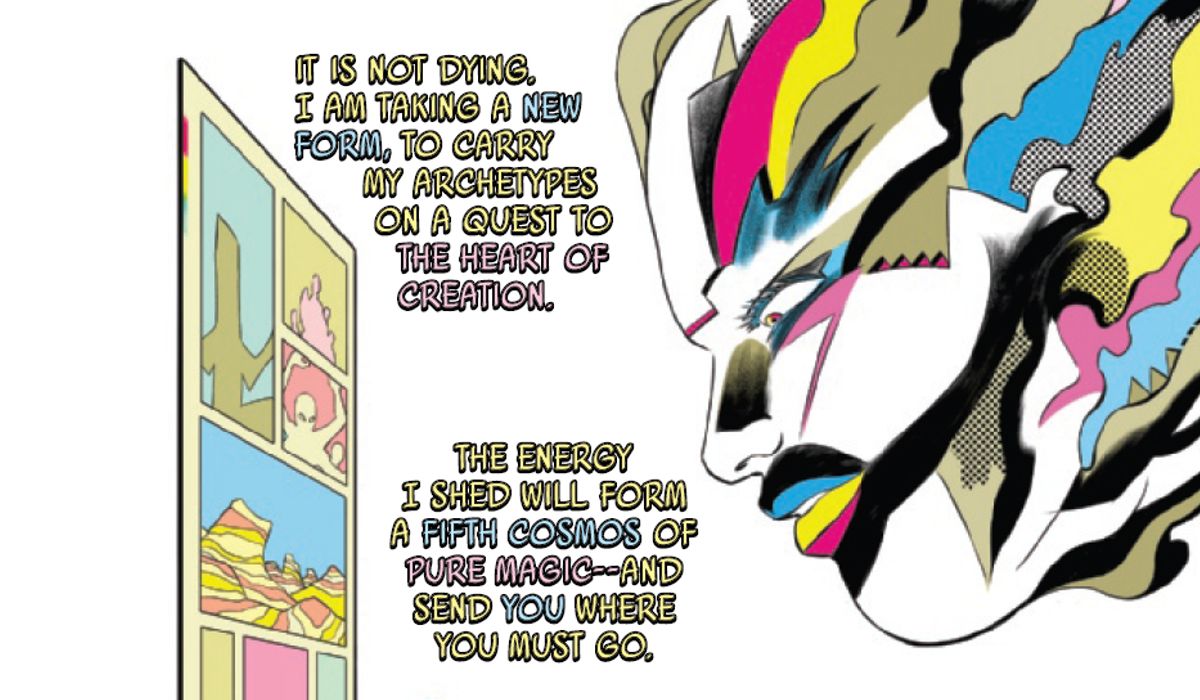 These revelations surrounding the Fourth Cosmos are certainly exciting, all while still managing to serve up the kind of fan service that doesn’t detract from the story at hand. The Defenders have had more than their fair share of strange encounters, and although this absolutely stands out as one of the strangest, it is still a fitting adventure for the ragtag team of interdimensional heroes. Even if the Pilgrim doesn’t have any role to play in the Marvel Universe’s presence, that doesn’t keep them from now being one of the most important parts of its history.

How to Watch the Cyberpunk 2077 Stream