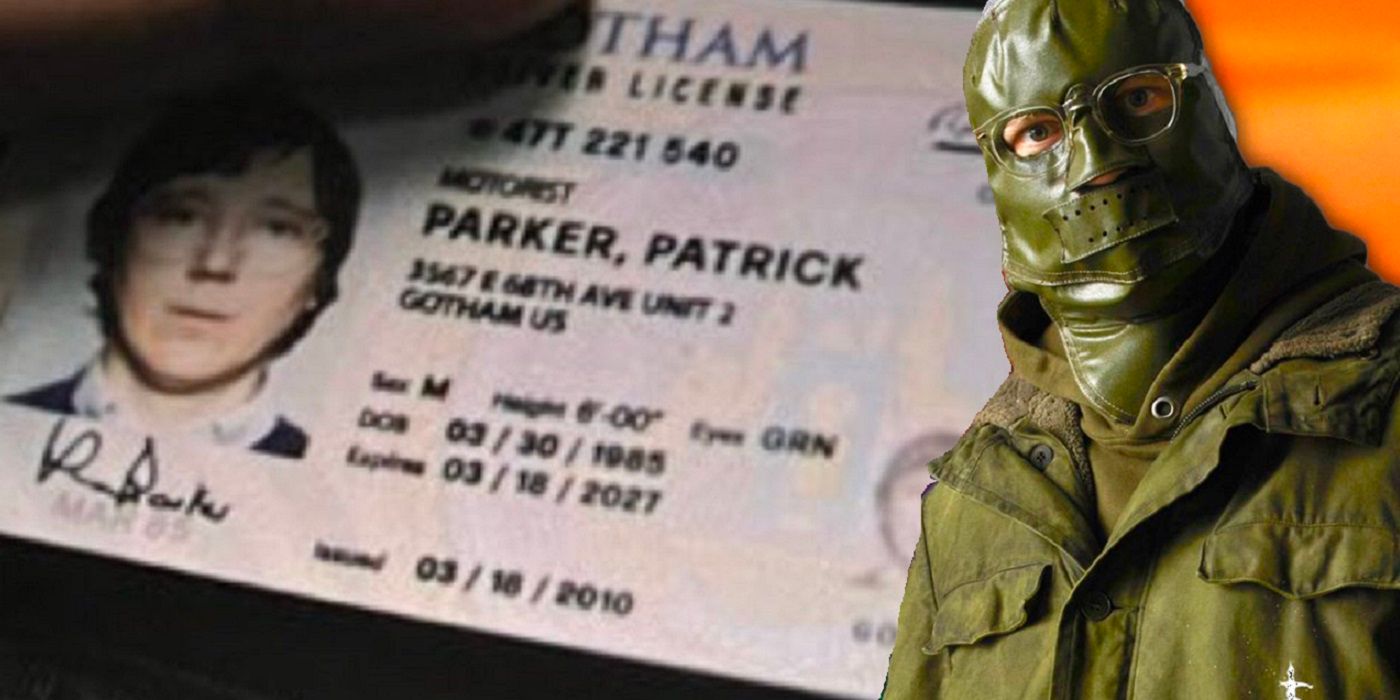 In the latest Comic Book Legends Revealed, discover the surprising origins of the aliases that Riddler used in the recent hit film, The Batman.

Welcome to Comic Book Legends Revealed! This is the eight hundred and thirty-third installment where we examine three comic book legends and determine whether they are true or false. As usual, there will be three posts, one for each of the three legends. Click here for the first part of this installment’s legends.

The aliases that Riddler used in The Batman came from the comics.

In the new hit film, The Batman (SPOILER WARNING!), Batman and the Gotham City Police Department believe that they’ve captured and stopped the serial killer going by the name the Riddler, but you could tell by the look on his face when he was captured at a diner that he had a lot more up his sleeve… 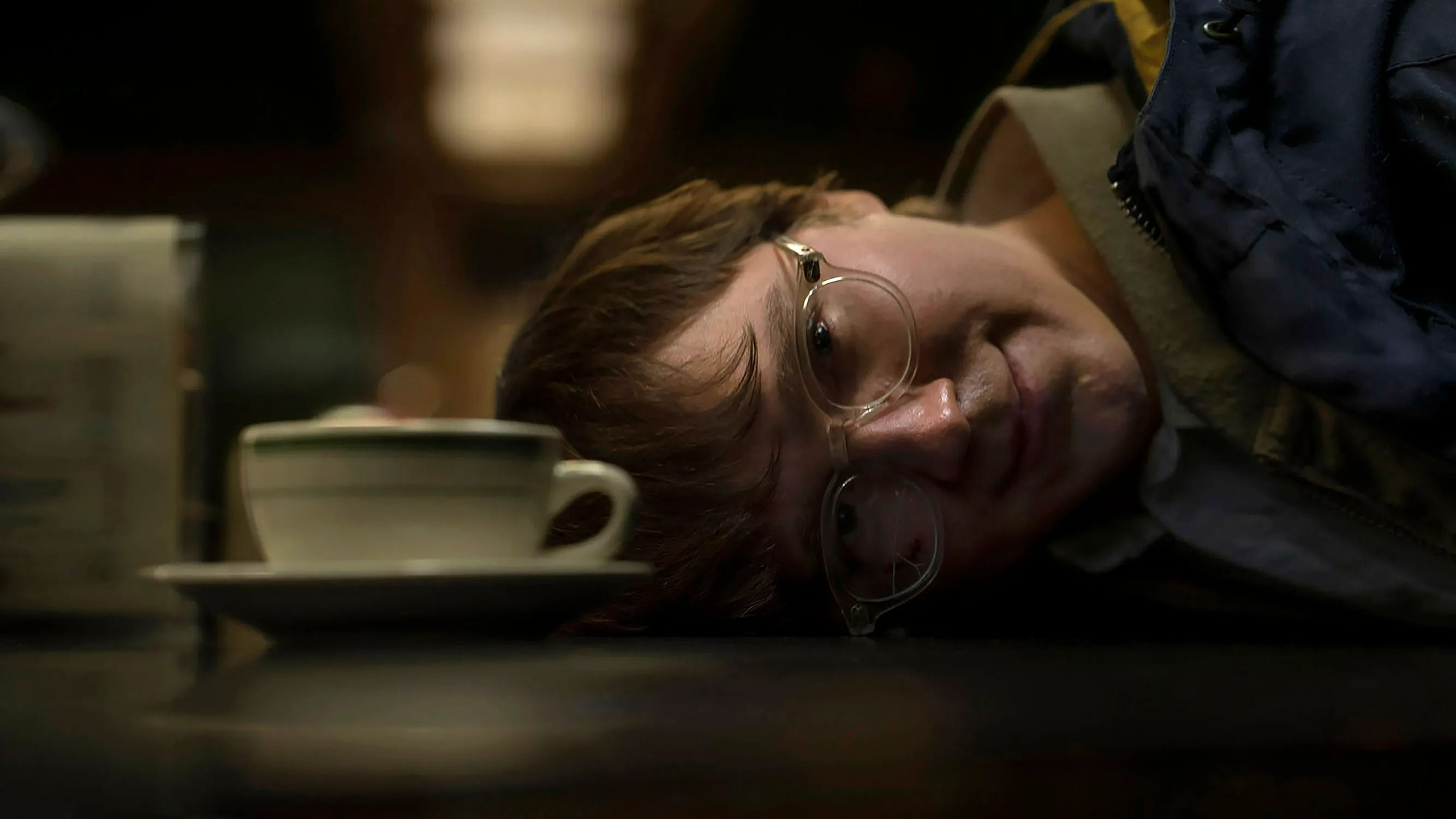 And sure enough, his capture was just part of his overall master plan that still had a lot of dark twists and turns coming. In any event, when the police were looking through the Riddler’s stuff in his apartment, they came across two driver’s licenses with different identities on them. One of them said Edward Nashton and the other one said Patrick Parker.

When the Riddler was introduced all the way back in 1948’s Detective Comics #140 (by Bill Finger, Dick Sprang and Charles Paris), his name was Edward Nigma, which actually helped to develop his love of puzzles, as he figured, “Heck, my name IS basically enigma, so I guess I should be good at puzzles and riddles!” 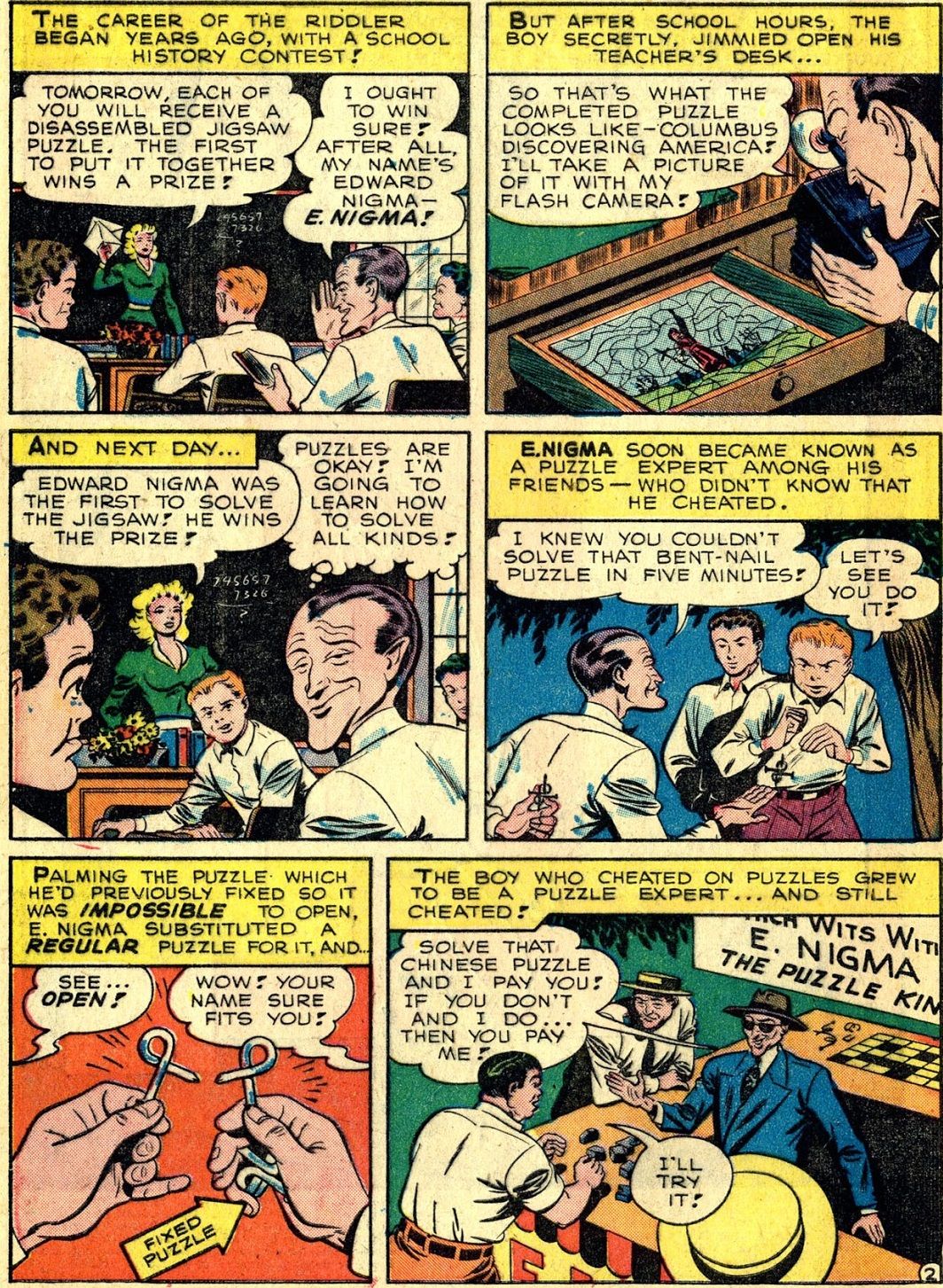 In any event, in The Question #26 (by Denny O’Neil, Bill Wray and Malcolm Jones III), O’Neil decided to deconstruct the Riddler a bit, and I’ll be frank, I don’t know if I like the idea of the editor of the Batman line of comic books sort of taking the piss of the Riddler in an unrelated comic book, but whatever, O’Neil WAS a comic book genius, so I guess I should let it slide. In any event, in that issue, he has Commissioner Gordon come to release the Riddler from custody… 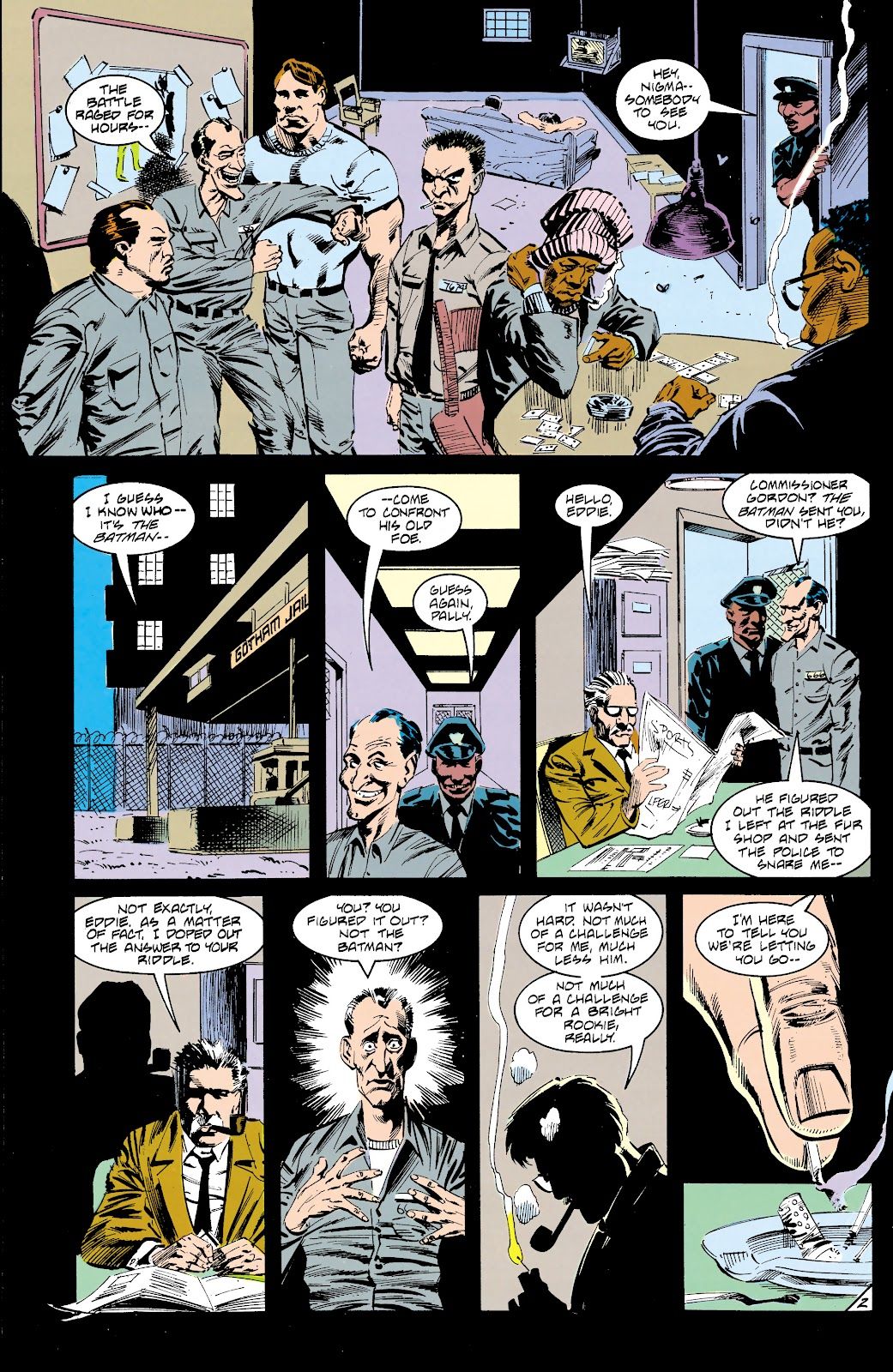 At the same time, he also reveals that he knows that the Riddler changed his name from Edward Nashton to Edward Nygma, and thus even his serendipitous name was full of nonsense… 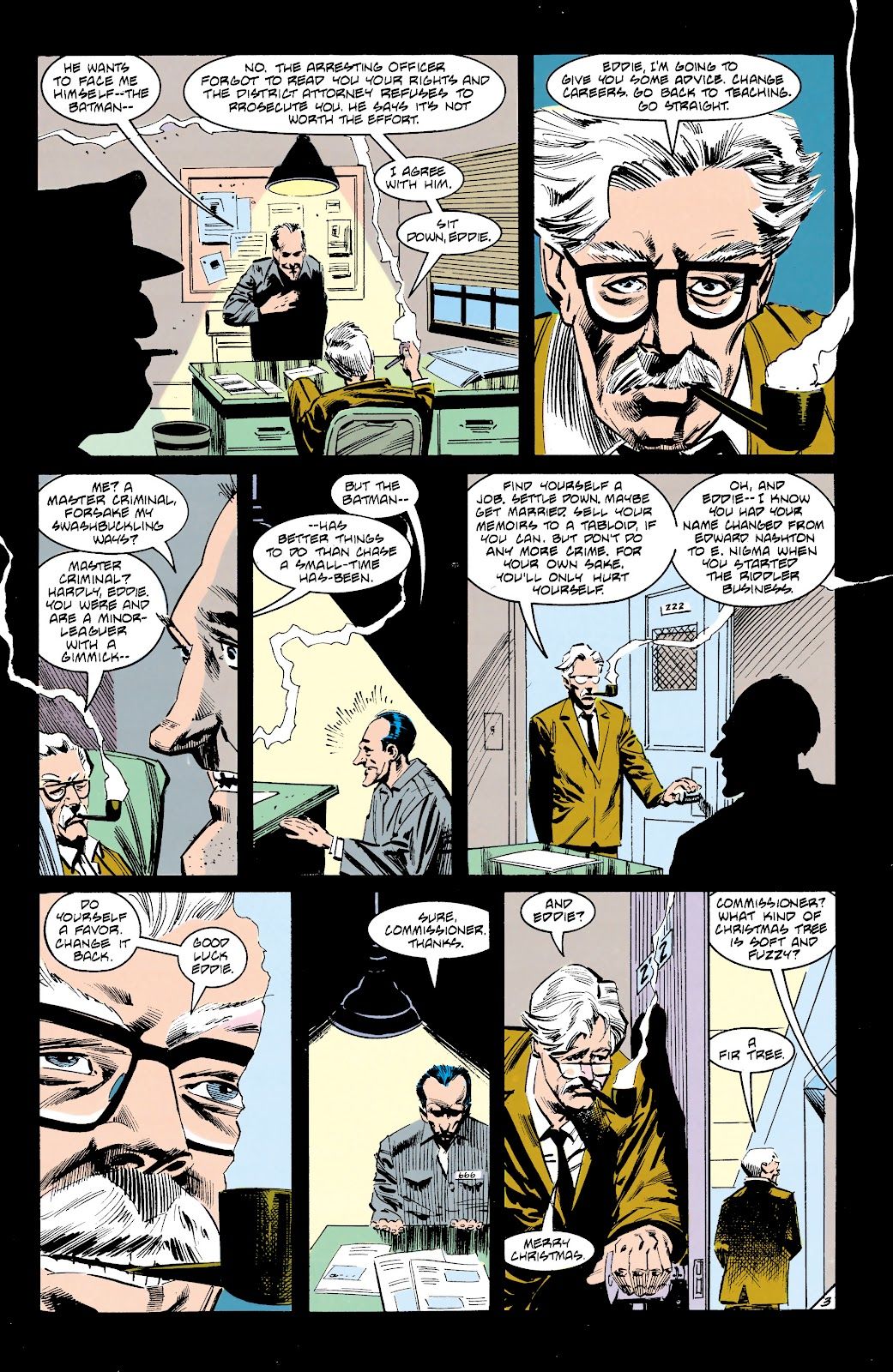 Years later, writer Shane McCarthy would reveal that while his real name WAS Edward Nashton, the Riddler was always actually VERY gifted at puzzles and it was his abusive father that beat him so much that made him misremember his past and THINK that he cheated, when he was really legitimately excellent at riddles ever since he was a boy.

Okay, so what’s the deal with Patrick Parker?

RELATED: How The Three Stooges’ Love of Pie Fights Nearly Got a Marvel Staffer Fired

Well, I had recognized the name as a list of aliases for the Riddler that I had seen over the years, but my buddy Alex Jaffe, an expert at DC trivia who has a question and answer column on DC’s website (among many other cool articles he writes for them), wrote to me and asked if I had ever actually seen the alias used in a comic book before. I had not, but I told him I’d try to find it.

He then explained to me his theory that the alias was never actually used in a comic and after reading through a veritable ton of Riddler stories, I think that he is correct. You see, if you went back to, say, 2010 and looked at the Riddler’s page on Wikipedia, this is what you would find.

And that’s all well established in the comics to that point.

Yes, in November of 2013, someone edited the Riddler’s Wikipedia page to add the Patrick Parker alias and it has been there ever since (although now it contains a “citation needed” notice on it).

There obviously have been many cases over the years of people maliciously editing Wikipedia pages as a form of trolling, and this COULD be what happened here, as well, but I tend to think that this is such an odd little edit that I lean more towards this being an innocent screw-up and some person out there legitimately believes that Patrick Parker was established as an alias for the Riddler at some point in time.

In any event, obviously, Matt Reeves or someone in the production of the film decided to do a little Easter Egg and use some of the Riddler’s aliases from the comics and just as obviously (and quite reasonably, mind you), they went to Wikipedia to find them. This has happened before, when a fan edit of a Halo logo into a Ra’s al-Ghul logo made its way into Deathstroke’s sword in Justice League.

The ironic thing, though, is that now that it has appeared in The Batman, the Patrick Parker alias is now officially an alias for the Riddler and therefore, the Wikipedia is retroactively correct now! Hilarious! That sounds like some sort of convoluted Riddler plot, right?

Thanks so much to Alex Jaffe for turning me on to this interesting little mystery. Be sure to check out more of his work. And thanks to my pal, David B., who pointed out to me a while ago that the Edward Nashton reveal was in that Question story and not a later story where I thought it had debuted.

In the latest TV Legends Revealed – Discover the line of dialogue that one Three’s Company star said they wouldn’t even say with a gun to their head!

KEEP READING: Why Did George Perez Have to Drop the Original Ending of His Wonder Woman Run?

If Shang-Chi Isn’t Marvel’s New Iron Fist, He Should Be – Here’s Why

Peridot Looks and Plays like a Charming, AR-Only Tamagotchi