Okay, obviously Marvel is publishing too many minis to keep track of nowadays. But a sizable portion are tied to events big and small, and to what’s happening on Krakoa, so here, we’re instead* going to focus on five self-contained stories that are doing their own thing**, spotlighting lesser-known characters and/or acting as a canvas for creators gone wild, whether that means creating an alternate reality or eschewing verisimilitude altogether in favor of glorious cartoonish mayhem.

(*In the “also worthy” section, listing another five honorable mentions, we will look at one peripheral and perfectly self-contained Krakoan story arc available only in Infinity Comic format on Marvel Unlimited.)

(**I suppose it would be a waste to argue that any story Marvel puts out now is truly self-contained, but these minis are as close as they get these days 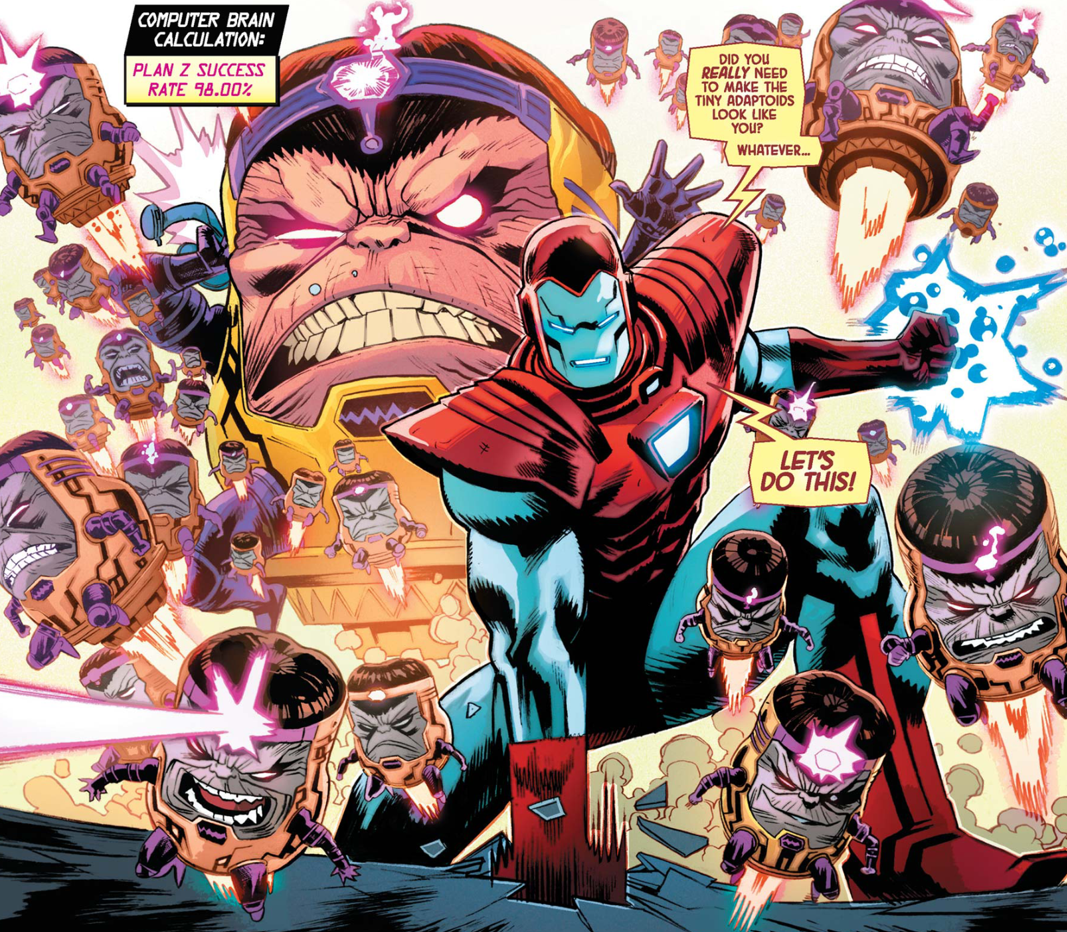 Ah, madness, murder, and mayhem; that’s our M.O.D.O.K. née George Tarleton! This mini starts with beautifully sequenced action and comedy, with writers Blum & Oswalt really letting Hepburn do his thing, going all out with the wild cartoon energy of the titular monster going haywire, lazily outsmarting his rival (Monica Rappacini, whose reactive expressions are priceless), and creatively murdering erstwhile minions with his sundry cyborg appendages. An unlikely but glorious team-up with Iron Man follows, and the story quickly develops this fan-favorite goofball villain in a surprisingly humane and sympathetic direction, unheard of for this resolutely Silver Age character—while never losing sight of what makes him such a figure of fun. With the full kinetic range of Hepburn’s artistic genius on display, all the laugh-out-loud moments of absurdity and surprise camaraderie, and the gradual reveal of the surprisingly touching tragedy of the thing that was once George Tarleton, this short series will go down as a classic of the 2020s, a wild blast of creative energy from all involved, working together seamlessly. 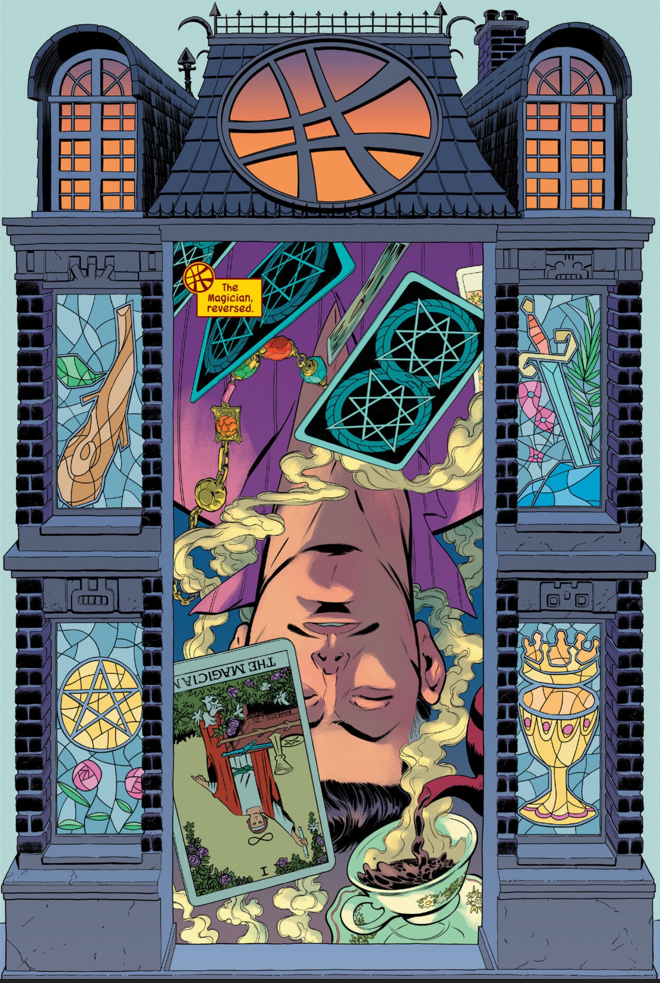 I’m betting it all on this one, baby! Well, almost; I did refrain from having this only mostly-finished mini in the top spot. The fourth issue will be out Dec 15; the last on Jan 19. But from jump it was clear this story would have cosmic ramifications well beyond even the characters involved. The roster on its own here is exciting enough: It’s a thrill seeing Ewing delve into the deep past of Galactus (Galan as a baby!) for anyone who enjoyed his Ultimates

take on the character (he’s the only one to have really humanized the Devourer); he gets to focus on Betty Ross without a Bruce or Thunderbolt in sight (an archetypal version version of Hulk may be a different matter); we can assume there’s a recognizable face behind the Eternity Mask (a mystery continuing in a very Silver Age vein from Marvel Comics #1000); and we get a figure of ambiguous gender by the name of Cloud, really a “sentient nebula,” but their human avatars number two, male and female (the question, for anyone who recalls the 1980s’ New Defenders, is whether Ewing’s portrayal will successfully overhaul the awkward missteps of Cloud’s original depiction).

Unlike the concurrent Dark Ages

stale mini(event?), Ewing & Rodriguez’s Defenders gives us something new while lovingly utilizing elements unique to the continuity and characterization of Marvel’s more offbeat corners, the cosmic and the mystic. With the classic style of Javier Rodriguez, recently coming off the gorgeous History of the Marvel Universe

with Mark Waid, this transuniversal romp feels like a love letter to the Silver Age—to both Kirby and Ditko. This is fertile territory Ewing has been mining since he started with Marvel, and now it feels like his mythopoeic project is culminating toward something, or at least weaving together toward some grand vision, threading his personal vision in with, dare I say it, Kirby’s, while also opening out toward so much future potential for Marvel’s shared universe at large. Plus, does Galactus’s mom have the hots for Strange—or is she just an enthusiastic adventurer? And one wonders about the identity of the mystery donor for her baby boy experiment gestated in vitro (the terminal future of the Sixth Cosmos seems pretty neat; alas). 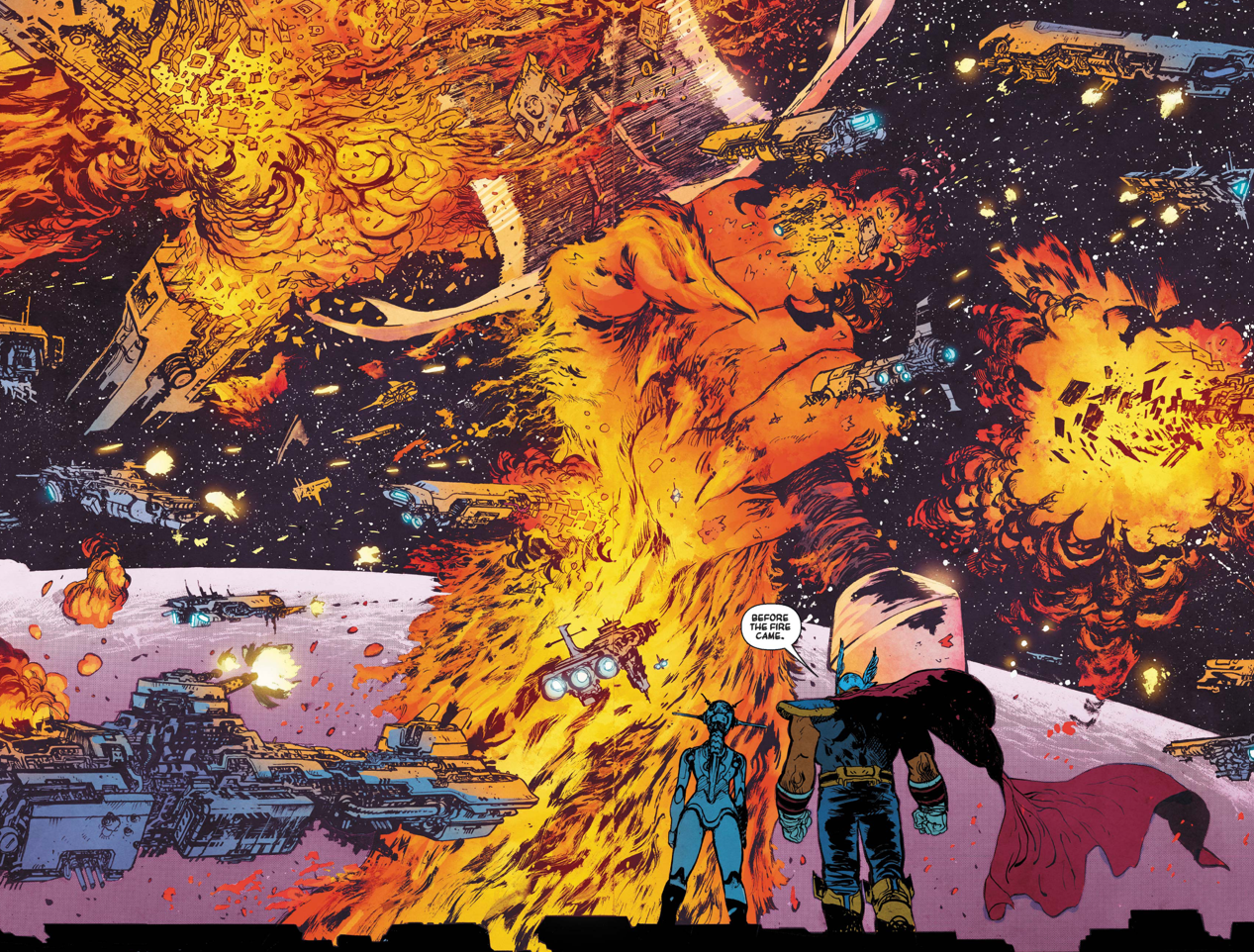 Delivering some of the most beautiful art of the year anywhere, this artist also gives us a fun but moody space romp to match, in company with Skuttlebutt,  Skurge the Executioner, and Pip the Troll; and Bill gets a new cosmic/mystic weapon. Note that although the story starts during the events of King of Black, it’s not a tie-in! A Knull-possessed Fin Fang Foom is just Johnson’s excuse to start out of the gate delivering some epic metal mayhem. But by the first issue’s end, mighty warrior Bill has been humbled, and he can’t change back to human form without Stormbreaker (destroyed early last year by Thor when Asgard’s king had briefly become Herald of Galactus), which only tears him down further after a painfully awkward moment of self-shaming in Sif’s bedroom. Thus, his sad adventure begins, but he rediscovers his friends along the way; not only is this the most endearing Bill has ever been, we also get Skurge and Pip at their most likable ever. Indeed, fans of this mini will want more adventures from this found-family quartet (including Skuttlebutt who now has a humanoid avatar): Flotsam of the Galaxy! 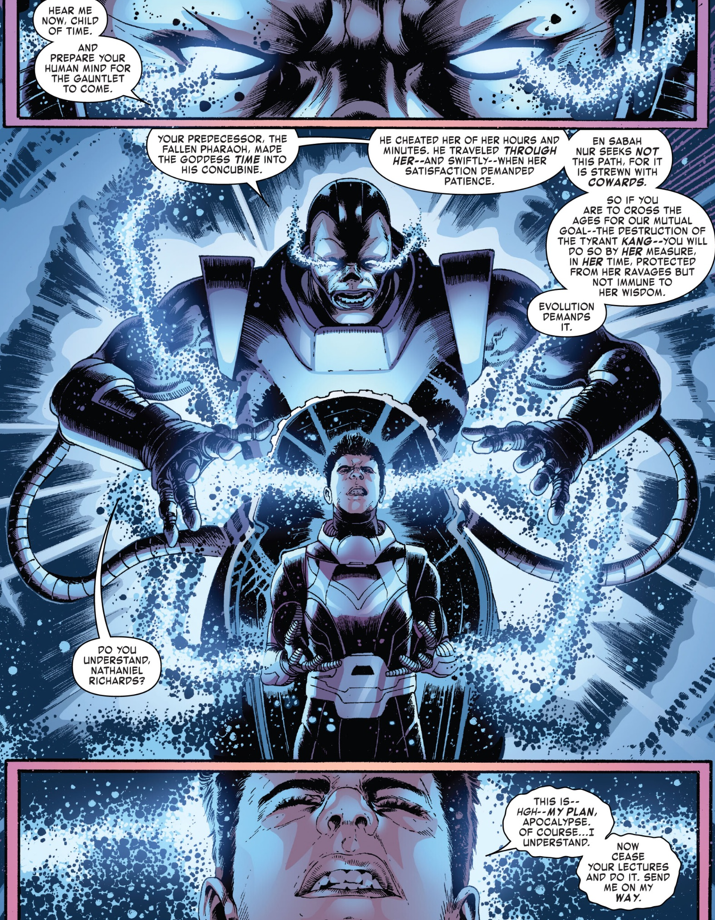 This is one of Marvel’s more successful origin stories retold, helped by the fact that timelord Kang hasn’t ever really had an origin story, at least not with any clarity or coherence, and this mini is well timed with the intro of his MCU version at the end of Disney’s Loki this summer. But which Kang are Kelly, Lanzing, and Magno focused on here? It’s the one we’ve known since 1963’s Fantastic Four #19 (or is it Avengers #8, or #10? Avengers Annual #2? Young Avengers #1? FF vol2 #8? Each is a starting point for Nathaniel Richards under a new guise, at different times in his wildly nonlinear life). But in his first-ever title there are added wrinkles, clever and surprising while never descending into the head-scratching obscurity most time-travel tales suffer from. Still, in the first issue, we see at least one Kang preceding the one we know, who starts out here as a teen—so who’s Kang Prime? Anyone who’s seen the Loki show will roll with this; after all, there’s not only the revelation that no prime reality exists any longer, but variants of the same character are bound to look wildly different (which is of course why it doesn’t matter that the Kang who’s troubled Earth-616 doesn’t look like Jonathan Majors as Kang!).

The story is partly set in Ancient Egypt, and delightfully, two big elements of Marvel prehistory collide here. It’d be wonderful if this streamlined history planted seeds for future stories that go beyond Kang, but more importantly, it’s just nice to see those outside threads woven into Kang’s early years. Above all, this miniseries is true to all of Kang’s major appearances while adding much more humanity and depth than we’ve seen before. Ultimately, this is a cleverly crafted narrative about a man who gradually but inevitably imprisons himself in his own ego—a fun, wild take on a universal theme. Magno’s art, expressive and dynamic, plays well to the story’s complex range and epic scale. The scripting of Kang’s narration is appropriately refined, lending the whole a tragic atmosphere in the classic tradition. Issue #5 comes out Dec 22. (Kelly and Lanzing are known for the recent Gotham City Garage (DC), Harbinger (Valiant), and Kings of Atlantis, a YouTube original cartoon series.) 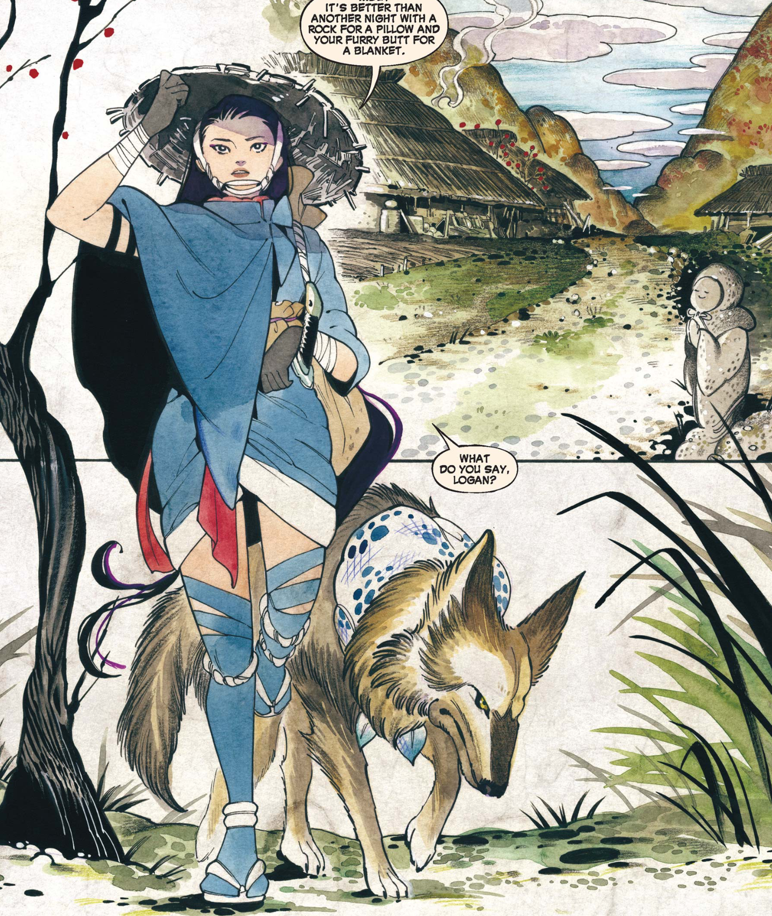 A real unicorn, this one, with some of the most distinctive and accomplished art Marvel has ever published, courtesy of Japanese phenom Peach Momoko, previously famous among Marvel-ites for well over 100 variant covers since spring 2019. Once collected, this series will go down as a classic objet d’art; although its aesthetic won’t be unfamiliar to any manga fan, Momoko’s high profile among Marvel readers in the anglophone world has brought the beauty of manga to fans who already love Japanese comics and those who are less familiar. The story itself is refreshingly simple and is no mere rendering of the X-Men franchise into a mythic/folkloric analogue. Favorite mutant characters and at least three famous nonmutants are instead used here, seemingly, as familiar markers for narrative archetypes perhaps unfamiliar to Western readers. The light and accessible “Yokai Files” at the end of each issue, written by Davisson, I believe, shed light on the Japanese myth/folklore at play. Will it all add up to something of a more coherent metanarrative on these hybrid influences? Maybe, maybe not—who cares! This painstakingly beautiful labor of love won’t see completion until next March, while issue #4 will now be released Jan 1. 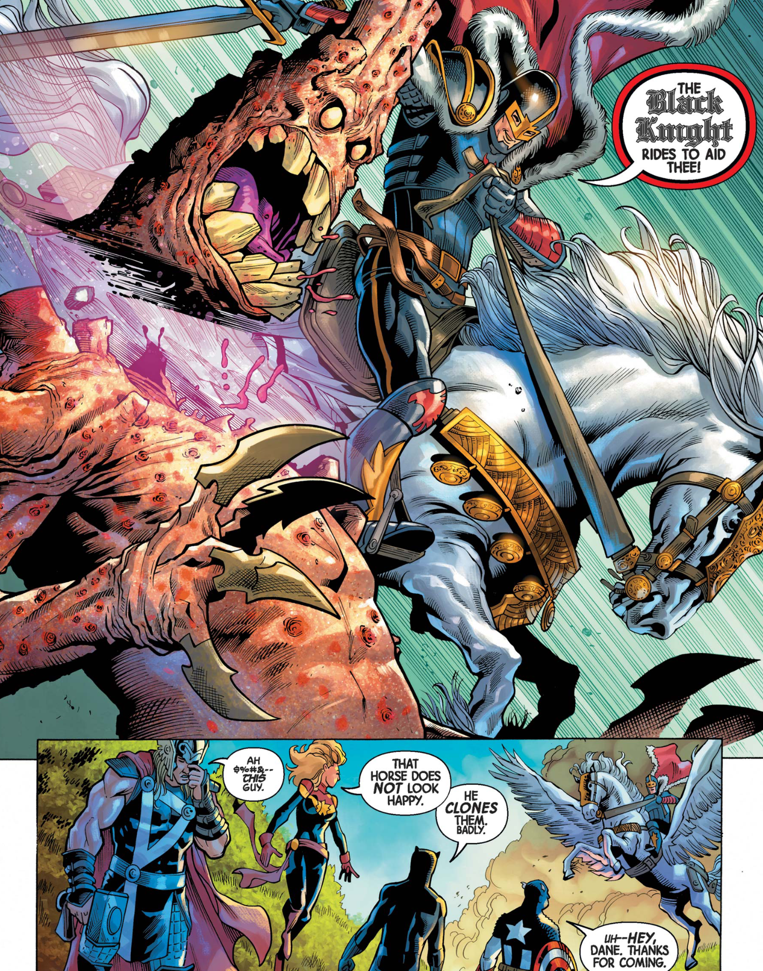 Finally, I can get behind the Black Knight as a compelling character! And we have two now, to boot. Overall, I still find Arthuriana very difficult to relate to; it just bounces off, even though I love high fantasy otherwise. Leave it to Spurrier to make it work, using a deeply but recognizably flawed protagonist and humanizing a C-lister who knows that persona has stunted his development. Unlike Taskmater (see below), Dane Whitman might evolve in the way that Eddie Brock has recently (not in terms of popularity, though!); the Arthurian schtick is still just a really hard sell nowadays, no matter how intriguingly deconstructed here or elsewhere (Tini Howard’s Excalibur). 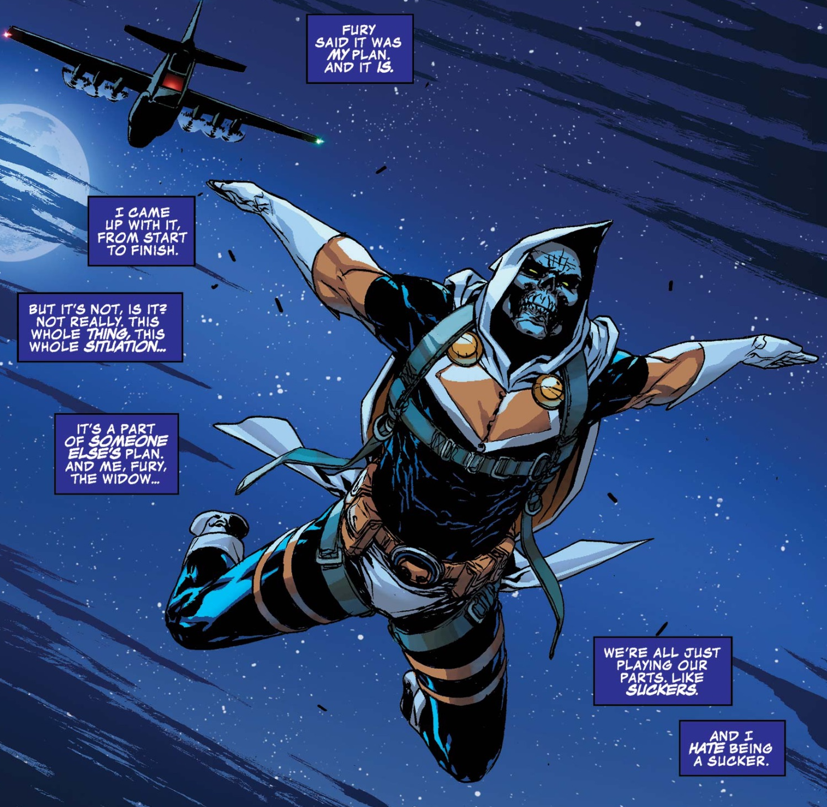 A fun, thoroughly inconsequential spy/merc romp through the post-SHIELD Marvel Universe (Coulson and his Squadron; the Wakandan Hatut Zeraze (“Dogs of War”); and the White Fox of South Korea), with a little meta reflection on the inevitable fate of characters who serve others’ narratives at the expense of their own growth and potential. Vitti’s art—gritty and kinetic—perfectly fits this cynical barnstormer where no one comes off looking noble or heroic; so Black Widow, Nick Fury, Jr., and Maria Hill make for apt costars. (The marketing on this mini was surely openly self-aware, making sure everyone knew of all the exciting guest-stars upfront.)

Winter Guard #1-4 by Ryan Cady & Jan Bazaldúa—An underrated series so far, this title just wrapped up Dec 1, but to me, the kind of grim espionage action and intrigue on offer here is catnip to me. In fact, I liked this much better than the ongoing it spun out of, Jason Aaron’s Avengers. We spend much more time here getting to know these characters, though it feels like we’ve barely scratched the surface. Also, Bazaldúa’s art here has really taken off; she’s fully come into her style with Winter Guard, and this feels like the perfect book for it, sleek and dark but surprisingly vulnerable and expressive. Undoubtedly, revelations and developments will feed back into the larger Avengers narrative, but this works as a self-contained story. 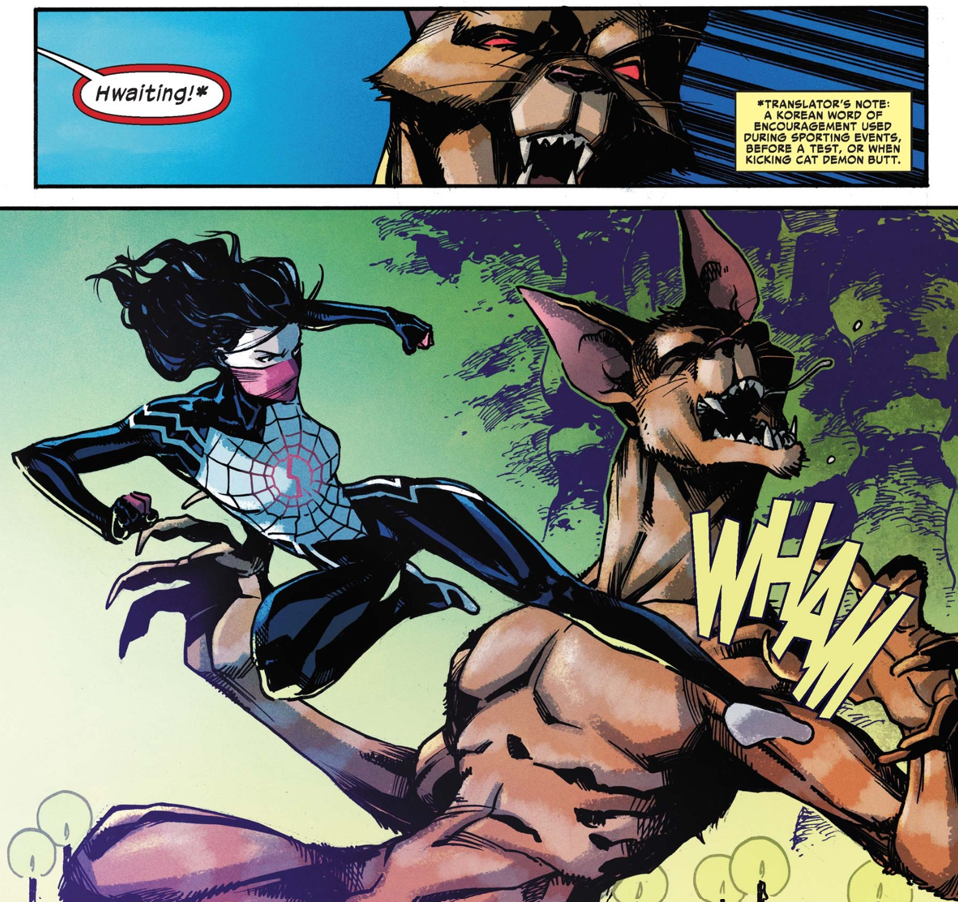 Fans of Miyazawa’s art on Ms. Marvel will find much to love here too, and though this Cindy Moon doesn’t have the takeoff potential of a Kamala Khan (a rarity), this more peripheral character gets much-needed further character development here, and a nemesis who has the potential to be her complex and enduring archnemesis (partly courtesy of Silvermane)… 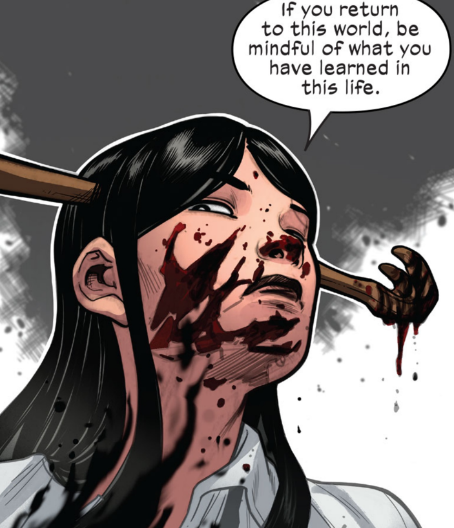 Through seven short chapters, this story seems to be endorsing lethal ecoterrorism from a couple of youths who seem very innocent at first, on the whimsical side of mutantdom. The fact that this is likely Marvel’s most popular Infinity comic and Marvel must be okay with the not-so ambiguous messaging—that’s sort of wild. It’s a swift, unhinged read that at first feels peripheral to the Krakoa era but ends up coming off as surprisingly relevant. Plus, this marks the return of the mad weredactyl Sauron, with his Silver Age silliness lending him mascot status to eco-vengeance-minded fans, thanks to Duggan’s punk-ish irreverence.

The post The 10 Best Marvel Miniseries of 2021! appeared first on Comic Book Herald.