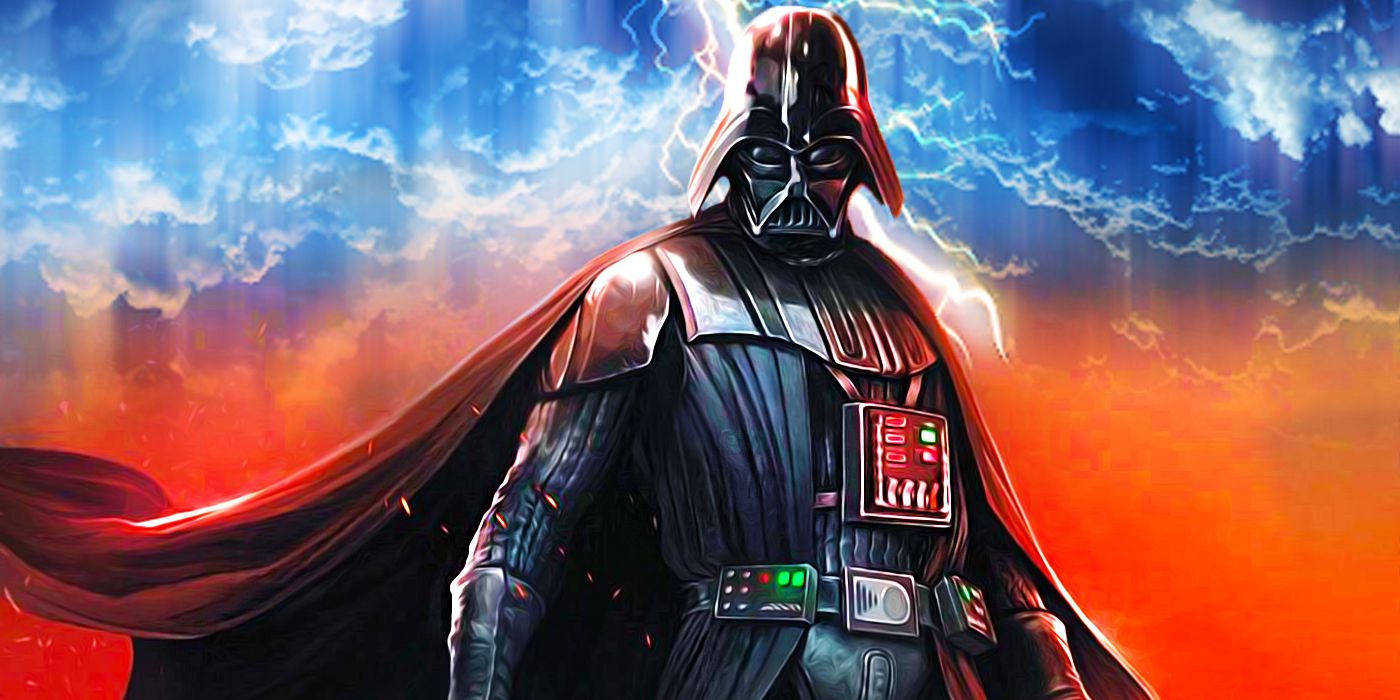 After Anakin sliced Master Windu’s hand off and pledged himself to the Dark Side of the Force, Palpatine’s preparation, that took the entirety of the Star Wars prequels, was complete. He was ready to initiate Order 66 and exterminate every last member of the Jedi Order. So, the evil Lord of the Sith sent a newly-christened Darth Vader to the Jedi Temple to wipe out the Jedi and younglings living there. Vader’s murderous actions had a profound affect on pushing him further into darkness. That notwithstanding, the canon comics Darth Vader (2017) #3 and #4 by Charles Soule might hint that Vader’s massacre might have also afforded him a Dark Side power-up.

During that comic series, Darth Vader hunted down survivors of Order 66. In the early issues, however, he had to address another problem. After losing to Obi-Wan in their fire-filled duel on Mustafar, Vader didn’t have a lightsaber. So, he went to the moon of Al’doleem to confront Jedi Master Kirak Infil’a in hopes of taking his lightsaber crystal. What Master Infil’a told Vader, though, could be of real significance. 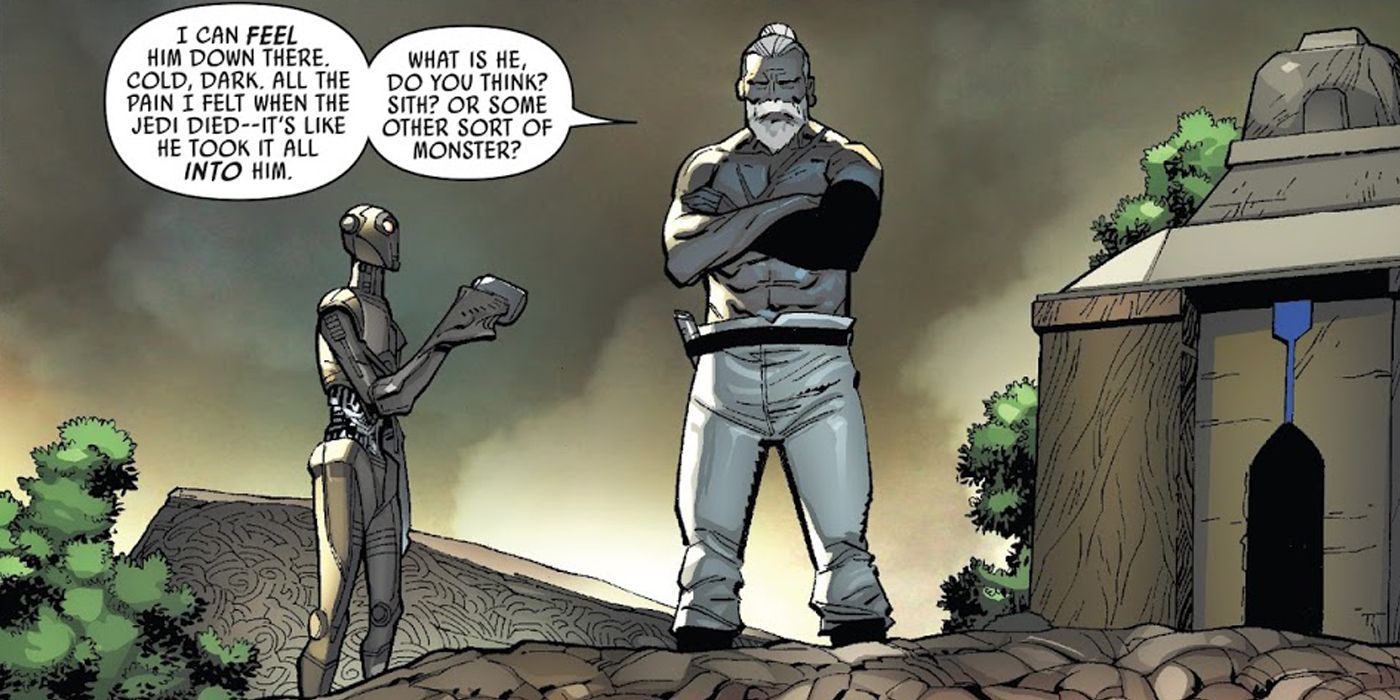 As Vader hypothesized during his research, Master Infil’a had been able to feel the Great Jedi Purge through the Force. Like Yoda, Ahsoka and Jaro Tapal, Infil’a felt the pain and suffering as most of the Jedi Order was slaughtered at the same time. Unfortunately, though, his Barash Vow, prohibited him from responding to the evil that he had felt. So, when he felt a darkness approaching the mountain, he was sure that the one responsible for destroying the Jedi Order was approaching.

After deflecting the Dark Lord’s Force choke, Master Infil’a told Vader, “Your use of the Dark Side confirms my suspicions – but let me ask you again. Not long ago, through the Force, I felt the death of almost every Jedi. That darkness resonates within you.” Vader confirmed Infil’a’s assessment, but as the Jedi Master watched Vader do battle with various traps he set, he continued his musings. In a pointed thought, he wonders aloud whether Vader actually “took the pain into him,” suggesting, if even metaphorically, that such a thing is possible. In the end, the two incredibly powerful Force wielders fought, with Vader achieving a conniving victory.

Afterward, Vader took the crystal for his lightsaber, but let’s not skip over Master Infil’a quotes. He noted that he could feel the same pain within Vader that he felt when all the Jedi had died. That seems to indicate that somehow Vader absorbed the suffering that he caused and, in doing so, made himself much more powerful.

RELATED: Yoda vs. Darth Vader: Why the Star Wars Icons Never Fought – and Who Would Win 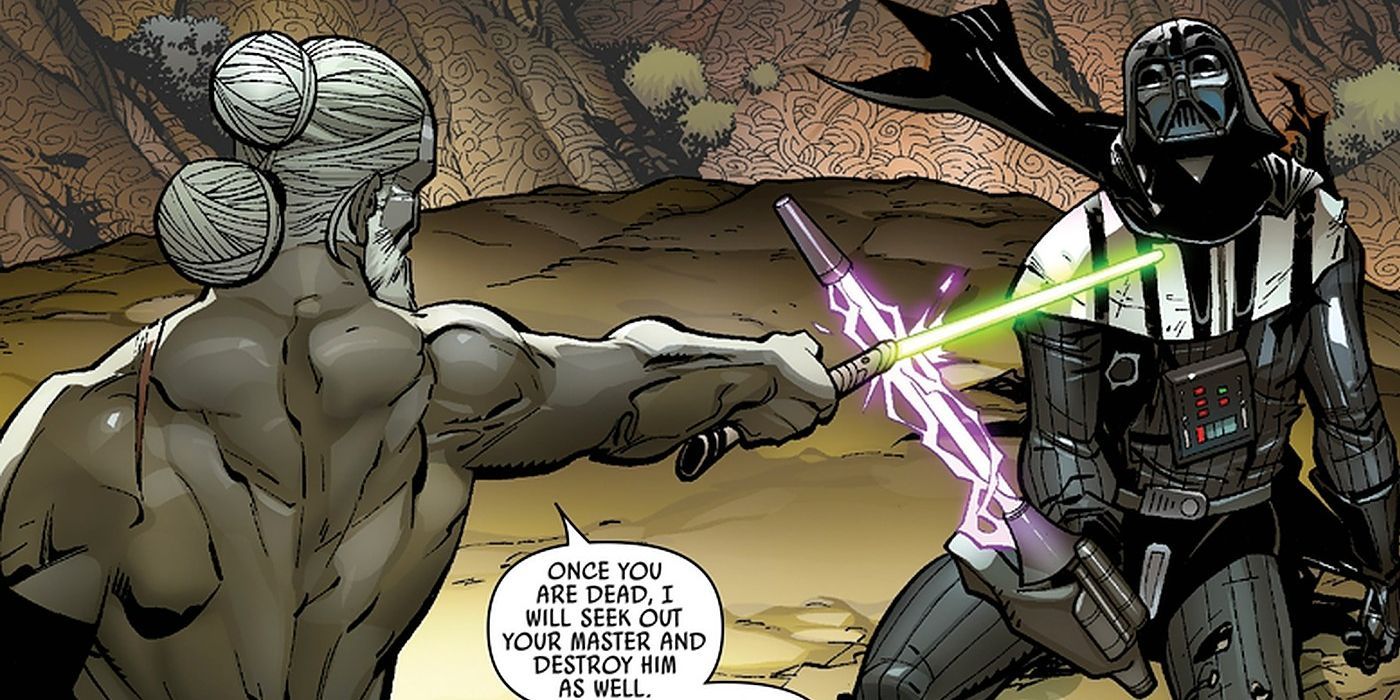 Now, the suffering that Infil’a felt could simply be the residual effects of Anakin’s personal suffering. For that matter, the psychological break that turned the young Jedi into Darth Vader and forged his connection to the Dark Side could probably be felt across the galaxy as well. With that said, transferring or absorbing of Force energy has been done before in canon. Force healing was one way that life can be transferred, and certain types of Force Lightning can drain the life force of others. Red Force Lightning, for example — which Vader himself used — can directly suck the life from its victims. So, the concept that Vader sapped power from Jedi as he killed them, if even indirectly, is a legitimate theory.

For that matter, Force drain was a Dark Side power in that some Sith were able to accomplish. Yupe Tashu explained the power in Chuck Wendig’s Aftermath novel by saying that “Sith Lords could sometimes drain the Force energy from their captives? Siphoning life from them and using it to strengthen their connection to the dark side.” That’s what Darth Sidious did to Rey and Ben Solo in The Rise of Skywalker, so there’s nothing saying that Vader couldn’t have done the same thing as he murdered his former comrades in the Jedi Temple. Maybe he didn’t even realize that he was using the power, but it seems very likely that part of Darth Vader’s strength came from Force draining the Jedi that he killed.

KEEP READING: Star Wars: What Rank Did Darth Vader Have In the Imperial Military?

DC’s Most Sinister Organization is Deadlier than Leviathan | CBR