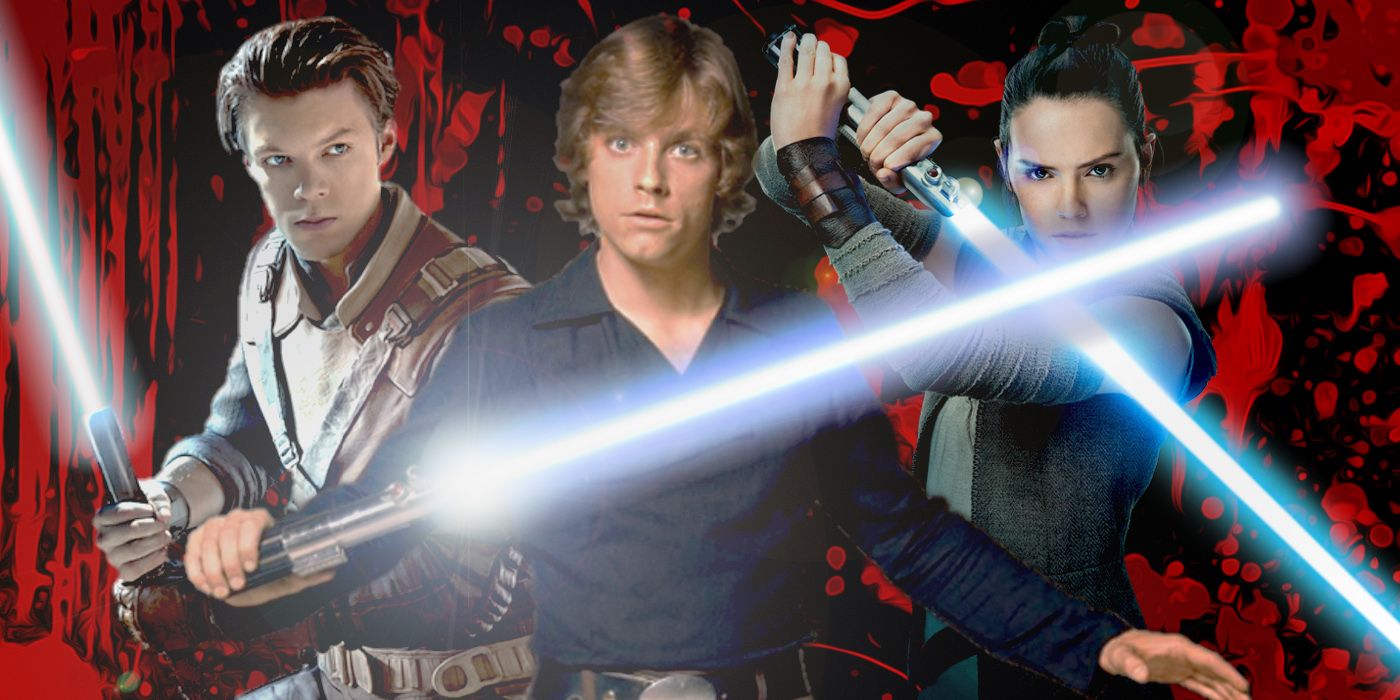 Jedi often are depicted as very serious, and focused on their role in the galaxy, but Star Wars: The High Republic Adventures #11 (by Daniel José Older, Harvey Tolibao, Jake M. Wood, and Rebecca Nalty) provides a more lighthearted look at the Jedi outside of battle or galactic politics. In the issue, the Padawans and Younglings of the Starlight Beacon take part in the Great Jedi Rumble Race throughout the station.

The only rule of the race is that “there are no rules.” It holds two important purposes within the context of the larger series. First, it acts as a distraction for the children of the Jedi Order as the Nihil continue their onslaught. Second, the race provides an opportunity for the Padawans and Younglings to stretch their abilities and reach their potential outside of fraught, high-stakes battles.

RELATED: Star Wars: Two Jedi Are Closer Than a Dyad – and That Could Be Their Last Hope 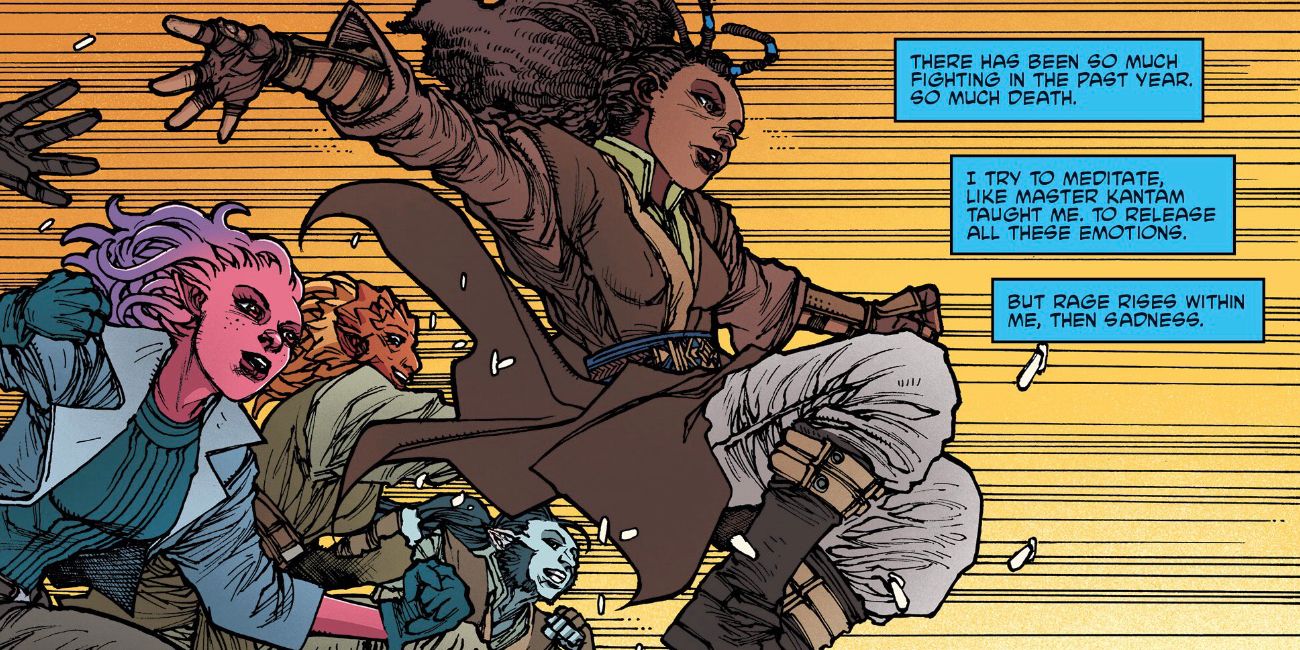 Padawan Lula Talisola is particularly worried over the continued Nihil invasion at the beginning of the Star Wars: The High Republic Adventures #11. Her fear for her friends is justified; the Nihil’s current strategy against the Jedi is to use the Great Leveler, a mysterious beast that feeds on fear and can calcify its victims. While the Padawans and Younglings might not know much about this particular growing horror, she may be able to sense through the Force what tragedy might be coming for the Starlight Beacon.

Jedi Masters Kantam Sy and Torben “Buckets of Blood” Buck decide to hold the Great Jedi Rumble Race precisely because of the growing fear within the younger Jedi. As Kantam explains, the race used to happen far more often, but “the tradition seems to have faded.” The race works as a distraction for the Padawans and Younglings of the Starlight Beacon, allowing them to focus on something other than the Nihil and war, at least for a little while. Kantam and Bucket’s role as the race’s arbiters also makes sense. Kantam is training both Lula and Zeen Mrala, and they have been a calm, supportive force for the Padawans throughout the entire series. Buckets of Blood’s nickname might seem intimidating, but it stems from his desire as a healer to keep his patients’ blood inside their bodies, not from any penchant for violence. Thus, Kantam and Buckets have been two of the Jedi Masters most focused on the Padawans and their physical and mental health throughout the series.

In the race, the younger Jedi also are given a safe space to play with their abilities in the Force, allowing them the freedom to try new techniques and abilities without fear of breaking any rules or codes. For example, Ram Jomaram uses his droid, V-18, to race ahead of the competition. Though using a droid might not seem like an example of a Jedi ability, Ram’s particular gifts with the Force involve an aptitude for mechanics, making V-18 a further example of his ingenuity with the Force. 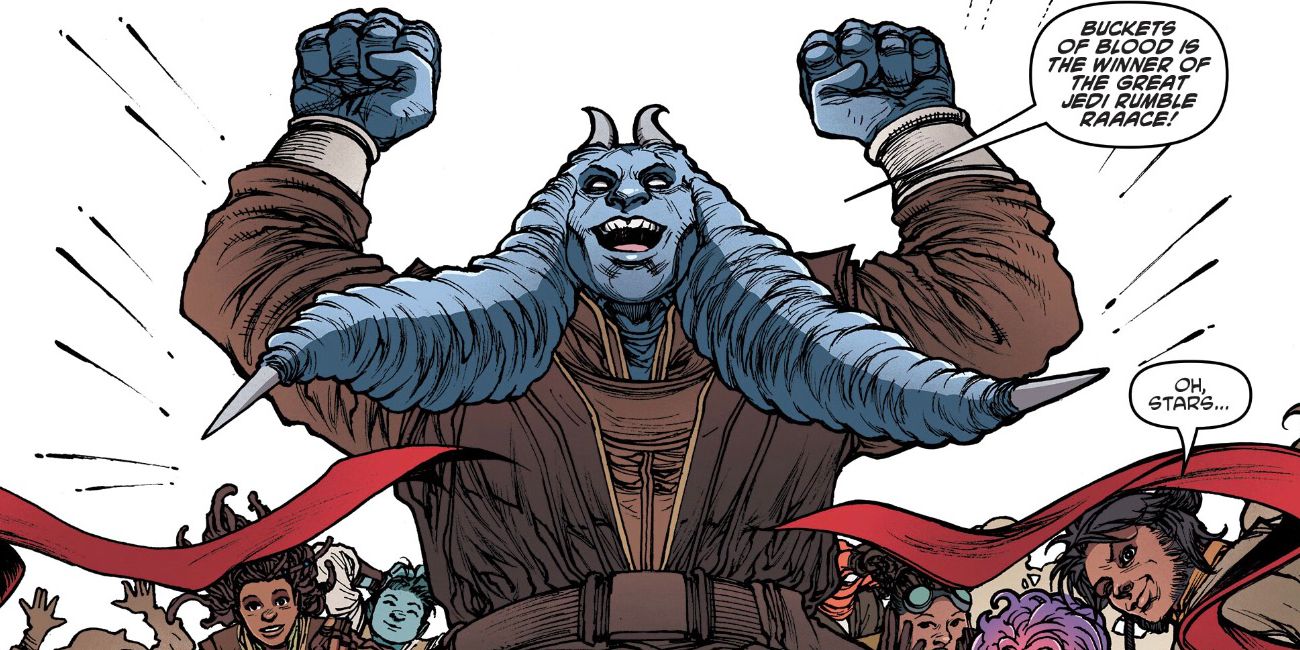 The race also shows that the rules are not really necessary for this particular group of young Jedi. As they race through the corridors, they are more focused on fun than using their abilities to potentially hurt their friends. The issue seems to be heading toward the most wholesome ending, with Lula and her friends deciding to cross the finish line together so that they all win, but their victory is stolen when Buckets of Blood cuts ahead of them. Since there are no rules, Buckets wins the race. This ending serves as a humorous counterpoint to the wholesomeness of the rest of the Jedi throughout the issue. But, it also helps the Padawans and Younglings see that they may have to think even more outside of the box, both in playful competitions and more serious missions in the future.

Throughout the issue, the Padawans and Younglings stretch their abilities in their attempts to win, pushing themselves to innovate through the Force. Thus, while more serious exercises often form the bulk of Jedi training, the Great Jedi Rumble Race shows that sometimes that play can be a more effective teacher. Overall, the race seems to achieve its goal as the Jedi of the Starlight Beacon struggle to find some levity as the Nihil spread throughout the galaxy.

EXCLUSIVE: Read an excerpt from Victoria Grace Elliott’s YUMMY: A HISTORY OF DESSERTS