Star Wars has no shortage of iconic pairings, from Anakin Skywalker and Obi-Wan Kenobi to R2-D2 and C-3PO to 4-LOM and Zuckuss. However, there’s arguably no duo in the galaxy far, far away more iconic than Han Solo and Chewbacca, who are slated to headline their own Marvel Comics series that kicks off this March from writer Marc Guggenheim and artist David Messina.

In an interview with CBR, Guggenheim peeled back the curtain on Han Solo & Chewbacca, which takes place between the events of Solo: A Star Wars Story and A New Hope and sees the fan-favorite smuggler and Wookiee embark on a dangerous heist for Jabba the Hutt, with none other than Greedo in tow. He also clued readers in on some of the larger implications the story will have in relation to the current Star Wars titles set after The Empire Strikes Back, including the ongoing Crimson Reign limited series.

CBR: You’ve worked on Star Wars comics in the past, including the Age of Republic and Age of Rebellion specials. What has Han Solo & Chewbacca allowed you to do with the franchise, that perhaps you haven’t had a chance to do yet?

Marc Guggenheim: The Age of Republic and Age of Rebellion stories were a blast, but they were short stories. Han & Chewie affords me a much bigger canvas, with the ability to tell a more long tail story. With that extra “screen time,” I can bring in other characters from around the galaxy and create some new ones. I can also let moments breathe a bit more because everything doesn’t have to be wrapped up in eight or 10 pages. 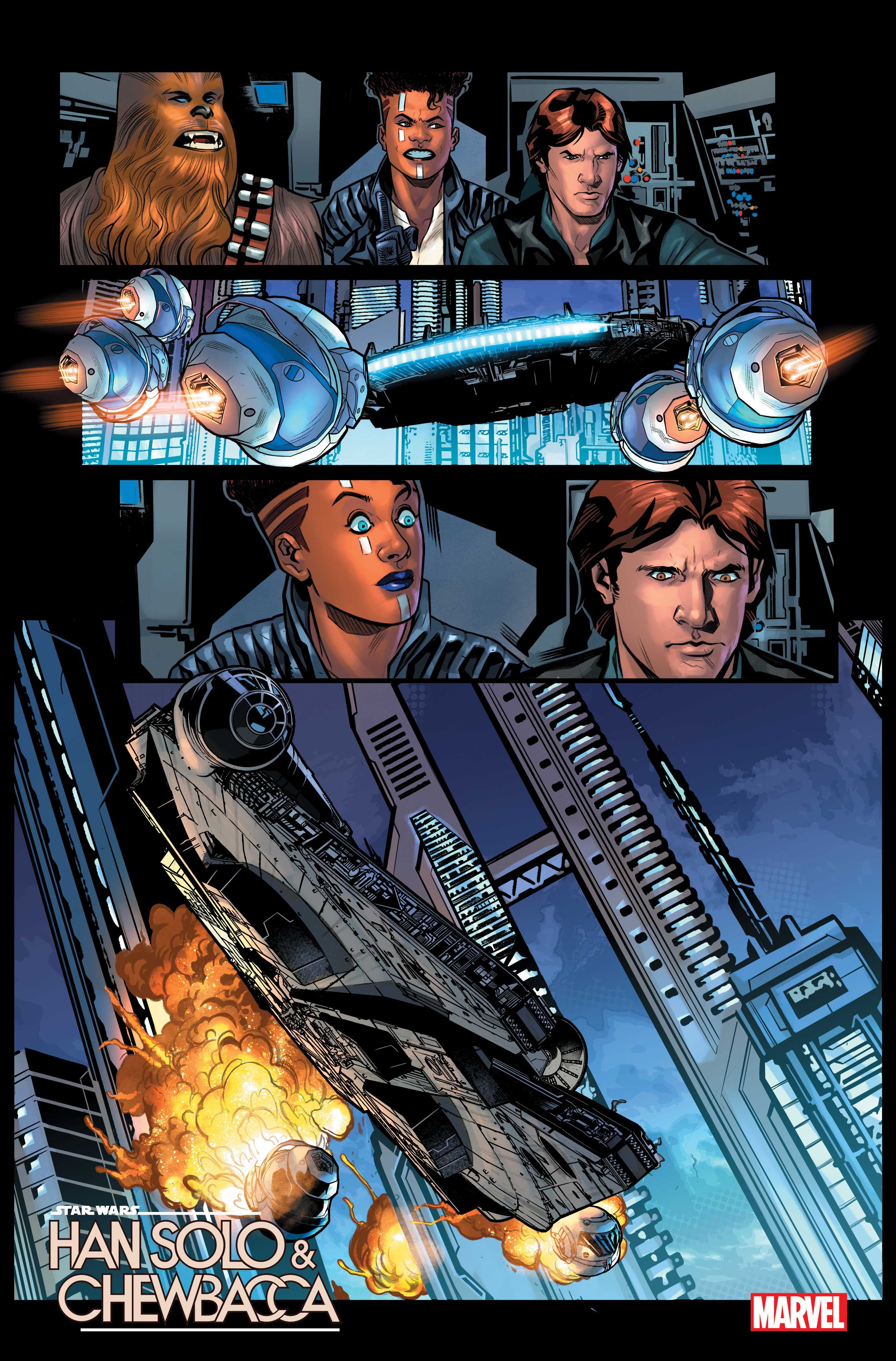 Thanks to War of the Bounty Hunters and Crimson Reign, both of which feature Qi’ra at the forefront, there’s been an increased focus on elements from Solo: A Star Wars Story lately. How did Solo impact your approach to Han Solo & Chewbacca?

First, I happen to be a huge fan of Solo: A Star Wars Story. I don’t feel that that film gets nearly the amount of love it should. I find it thoroughly entertaining and a great Star Wars movie. But also, it was co-written by Lawrence Kasdan, who for my money, is the single greatest writer of Han Solo ever and I’ve tried my best to emulate his brand of dialogue.

And what are the odds we may get an appearance from Qi’ra?

3,720 to 1. Just kidding. Qi’ra not only makes an appearance in Issue #3, there’s also incredibly tight integration with the events of Crimson Reign #2. 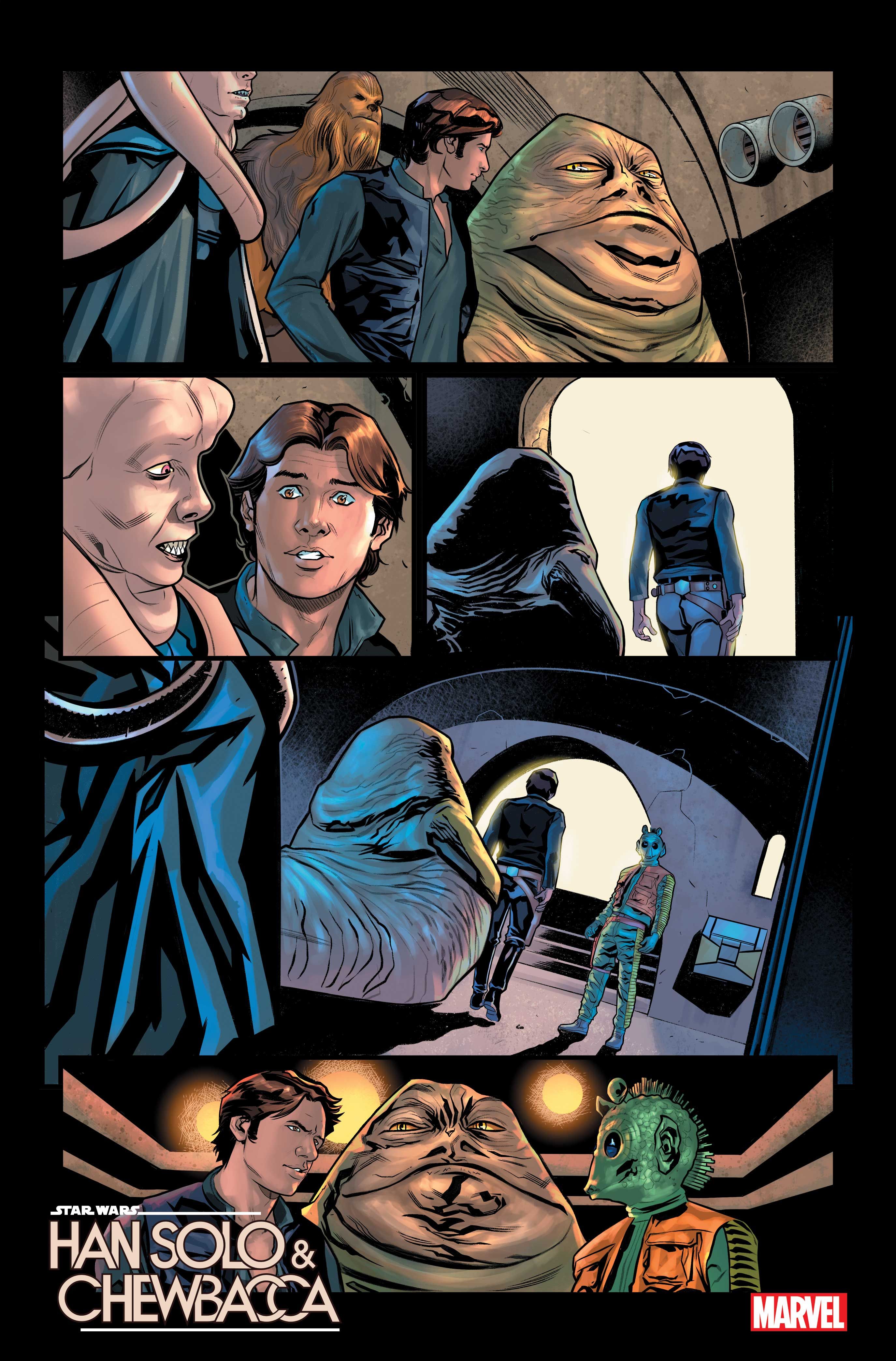 I think what people are responding to is something that’s always been inherent in Star Wars, namely, that it’s a big galaxy. There is enormous room for stories that don’t involve Rebels, Stormtroopers, Skywalkers, or Jedi. The Mandolorian and The Book of Boba Fett just serve to illustrate this point.

I grew up on Brian Daley’s Han Solo and L. Neil Smith’s Lando Calrissian book trilogies. So, from my (ahem) certain point of view, these corners of the franchise have always been fodder for wonderful stories.

With Chewbacca, you’ve got a character that speaks Shyriiwook instead of Basic, so there’s an increased focus on the visuals and lettering to do some of the heavy lifting in terms of how he emotes and expresses himself. Did this present a different sort of challenge?

It’s absolutely a challenge but it’s a fun one. In fact, I’m doubling down on it — literally and figuratively — in Issue #4, which is told exclusively from Chewie’s P.O.V. and features newly minted Disney+ star Krrsantan. So in that issue, we have two Shyriiwook-speaking characters. Should be a piece of cake. No problem, at all… 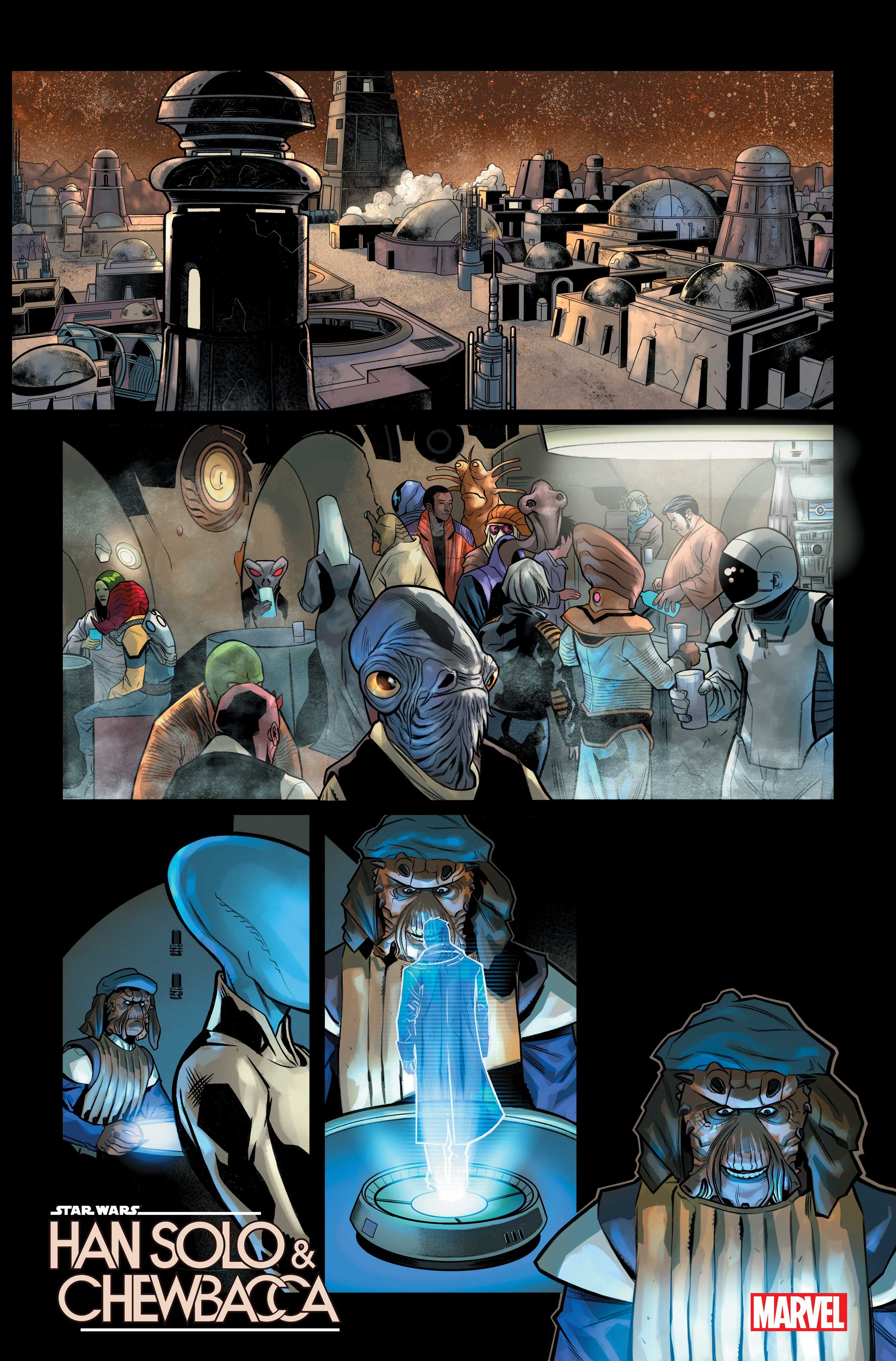 Speaking of visuals, you’re working with artist David Messina on this series. What’s something he brought to the table that surprised you or that you’re excited for readers to see?

David is an amazing artist and an amazing Star Wars artist, so I wasn’t surprised that his work on this series is stunning. But what’s truly remarkable is how perfectly he captures Han’s expressions and mannerisms. David’s artwork is the next best thing to taking photos of Harrison Ford as Han. He really gets all of Han’s colors — irony, annoyance, roguishness, and a hint of idealism.

You’re introducing a few new characters in this series, including someone called the “Marshal,” who you described as a corporate bounty hunter. What else can you tell us about them, or any of the other new faces readers will get to know?

Han Solo & Chewbacca was pitched as a Star Wars version of Butch Cassidy & The Sundance Kid. Well, if you’re gonna have Butch and Sundance, you need a lawman to go after them. As I thought about this, I got more and more interested in how justice is dispensed in the galaxy. We know about Imperial justice but the Empire isn’t out there policing the entire galaxy. There have to be officers of the law who aren’t affiliated with the Empire who are keeping the peace. For example — and I’m, of course, speaking hypothetically here — if a smuggler and a Wookiee robbed, say, your casino, who do you go to for justice? That led to the invention of a “lawman for hire,” someone more reputable than a bounty hunter, someone who acts a bit more under color of law. 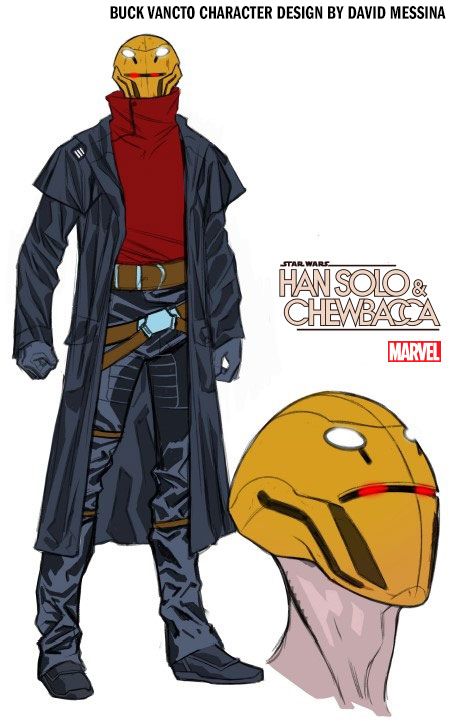 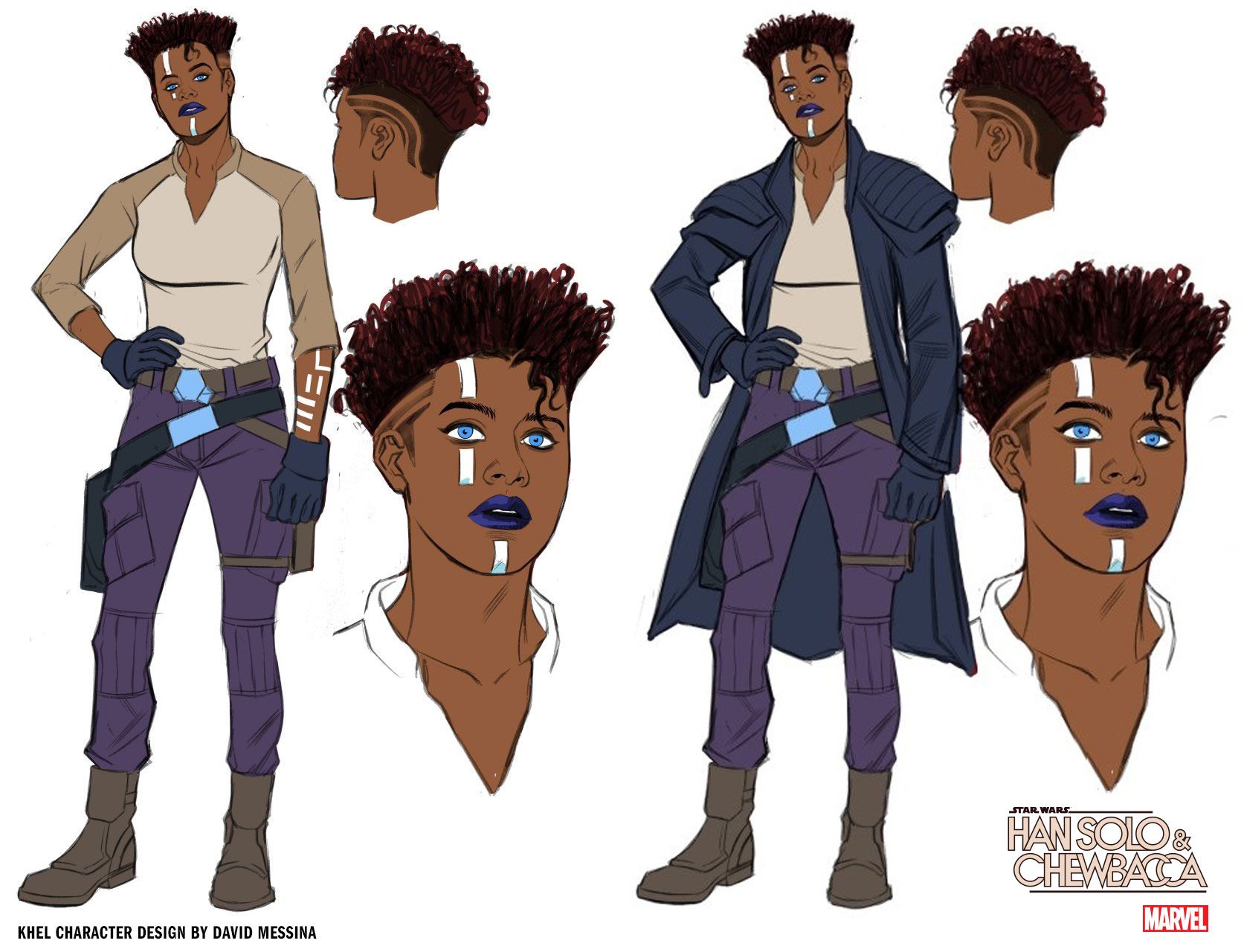 Another new character we meet in the first issue is a scoundrel named Khel Tanna. She also does jobs and pulls heists for Jabba the Hutt and she detests Han with a seething passion. She’s tough as iron and a helluva lot of fun to write.

A lot of Star Wars fans were interested to hear that Greedo would factor into Han Solo & Chewbacca, not as an antagonist but as an ally of sorts.

Of sorts. It’s a bit of an arranged marriage.

What makes him valuable as a companion to Han and Chewie?

Well, that’s the thing. As far as Han and Chewie are concerned, he’s not valuable at all. To the contrary, they view him as an albatross, a weight around their necks. And they’re not entirely wrong. But what interested me was exploring the origins of the animosity they clearly have in A New Hope. Not only that, but in A New Hope, Han doesn’t seem to respect Greedo much. He certainly doesn’t view Greedo as a bounty hunter. This story will shed some light on why Greedo detests Han so much and why Han holds Greedo in such low regard. 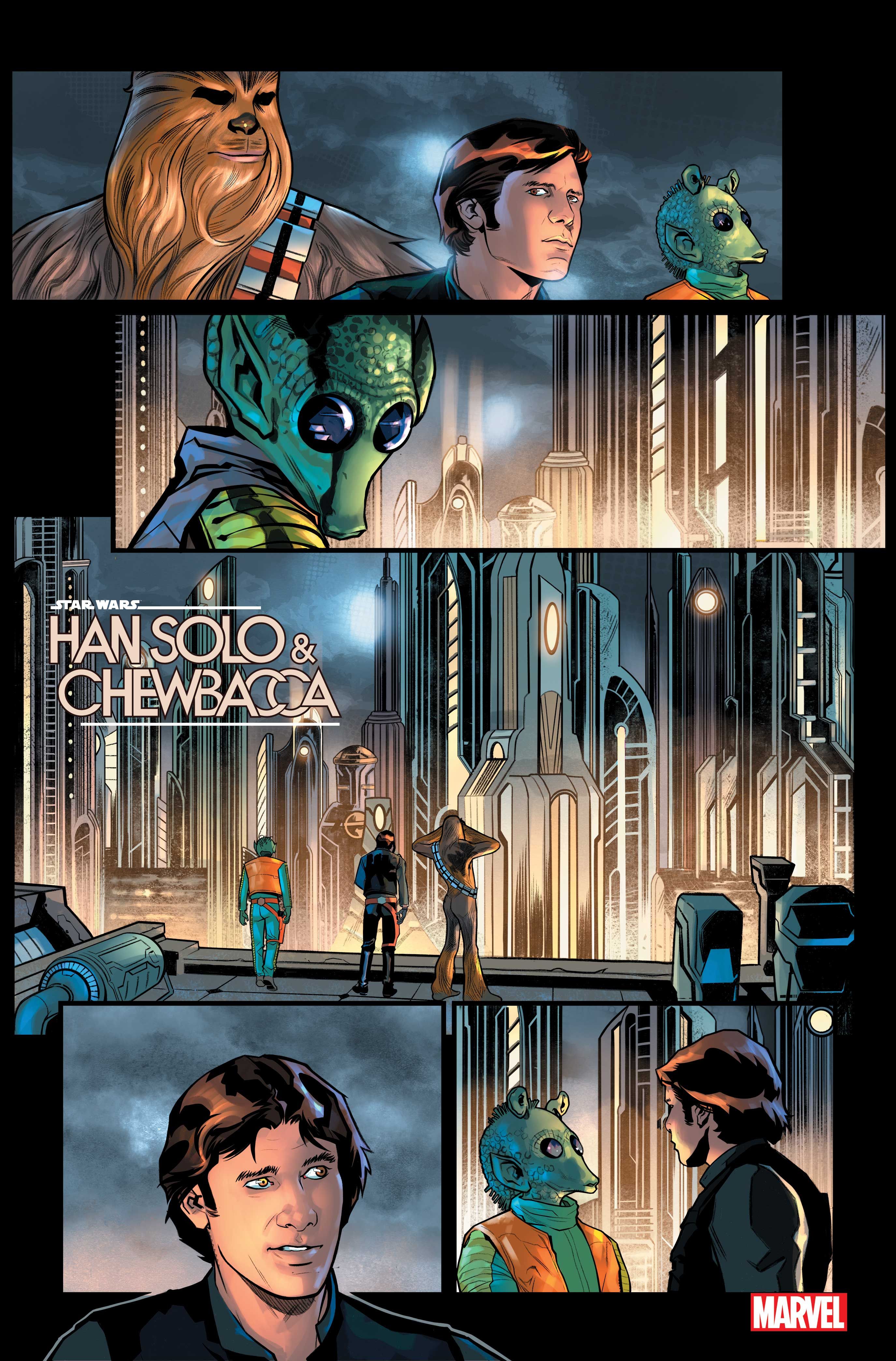 And will we get a “Maclunkey” drop?

I believe it’s spelled “ma klounkee” and, yes, I’d love to work that in as a fun Easter egg if I can.

Next Mainline Assassin’s Creed Game May Be in Trouble

DC’s Round Robin Competition Comes Down to Suicide Squad: Dark vs. Superboy