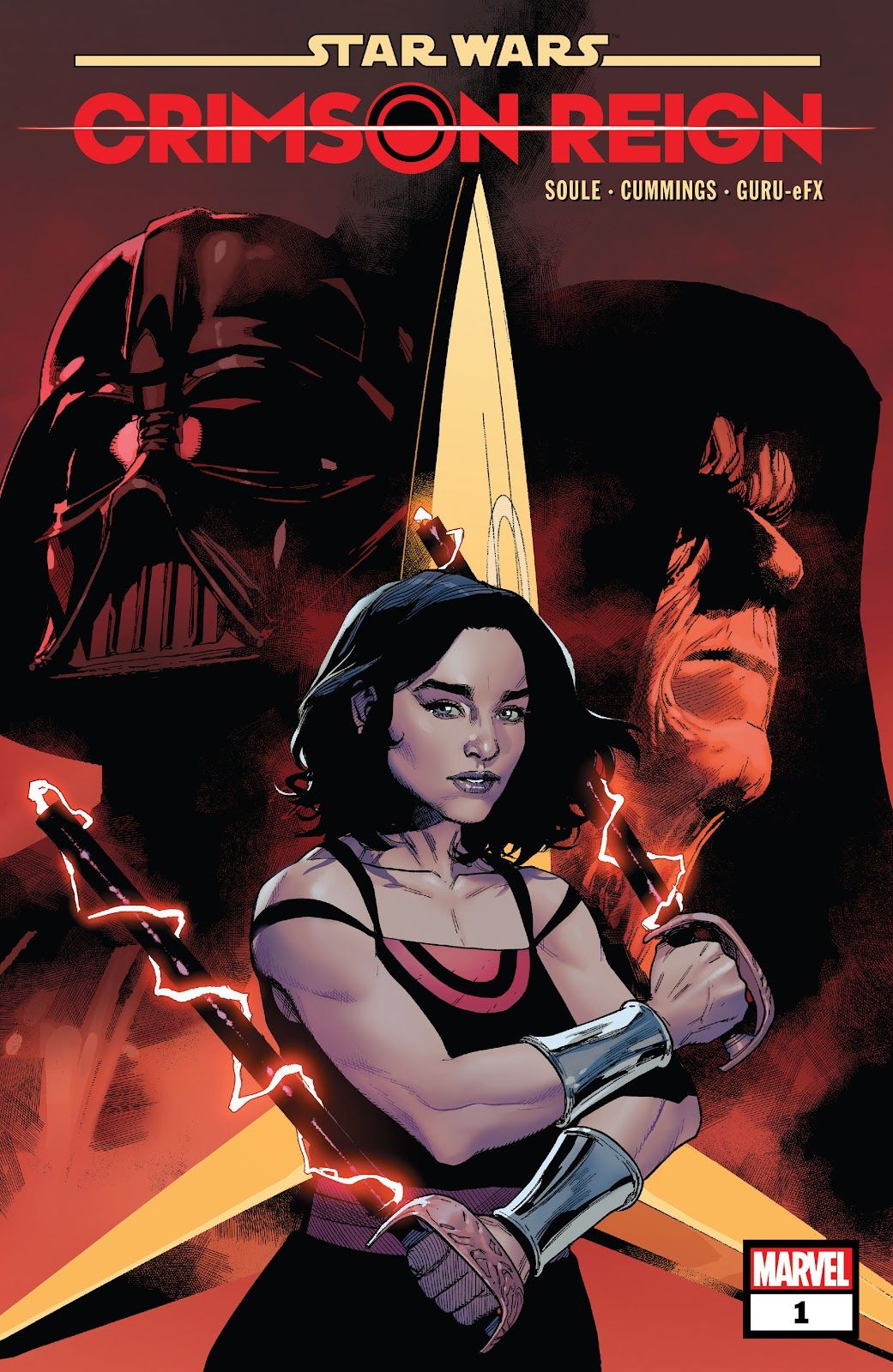 Back in 2018, Game of Thrones star Emilia Clarke brought Qi’ra to life in Solo: A Star Wars Story. Once a pirate and partner to Han Solo, Qi’ra went on to become an apprentice of Darth Maul, who taught her the deadly art of Teras Kasi. Then, in Star Wars: War of the Bounty Hunters, Qi’ra reemerged as the leader of Crimson Dawn. Now armed with the endless resources of the crime syndicate and with new allies beside her, Qi’ra has turned her attention to the greatest threat in the galactic universe: Darth Sidious and his apprentice Darth Vader.

Spearheaded by writer Charles Soule, artist Steve Cummings and colorist Guru-eFX, Marvel Comics‘ Star Wars: Crimson Reign #1 is the beginning of a new chapter in the Star Wars universe. Qi’ra has made grand plans for Crimson Dawn and, to that end, she has assembled a team of ruthless mercenaries, assassins and bounty hunters. She meets her fellow crime lords under the pretense of doing business, but instead sows seeds of mistrust amongst the syndicates using her agents. As havoc descends on the galaxy and trust wears thin, the Emperor cannot leave such matters unattended. 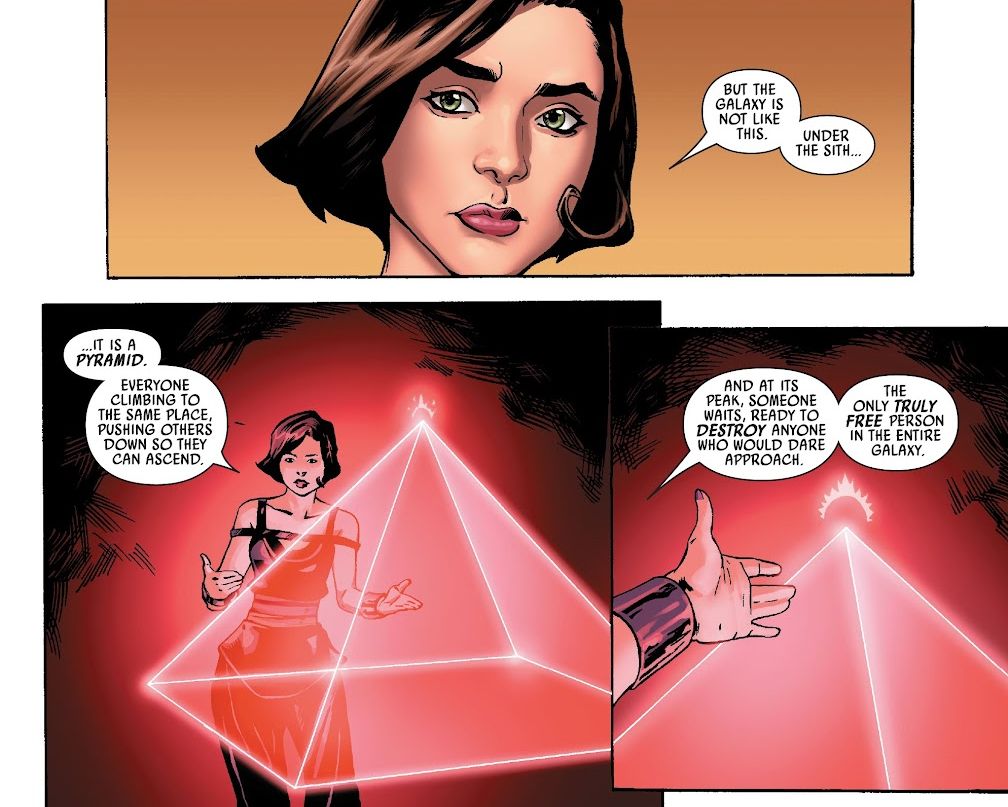 Soule puts Qi’ra in the spotlight, highlighting not just her strength as a fighter and commander, but also her desire to eliminate the root of the galaxy’s sorrow and suffering: the Sith. Star Wars: Crimson Reign #1 is heavy on exposition, with a good portion of the story explaining the complex political web of the criminal underworld. Despite that, the issue is eventful, as Crimson Dawn executes their plans tirelessly. Soule stitches several narratives together and builds up a tense atmosphere as the story goes on.

Cummings’ clean lines accentuate the characters against some plain backgrounds, duly capturing the likenesses of the actors who portrayed the characters on screen. Cummings’ use of wide panels and close-up shots gives the issue a cinematic feel. On top of that, colorist Guru-eFX’s style compliments the pencil work in the book with a colorful array of shades, ranging from ember-colored explosions to bluish gloom. Even though the art style does not always match the gritty nature of the book, the energy of the art team brings Qi’ra and her companions to life as they go on about their adventures. 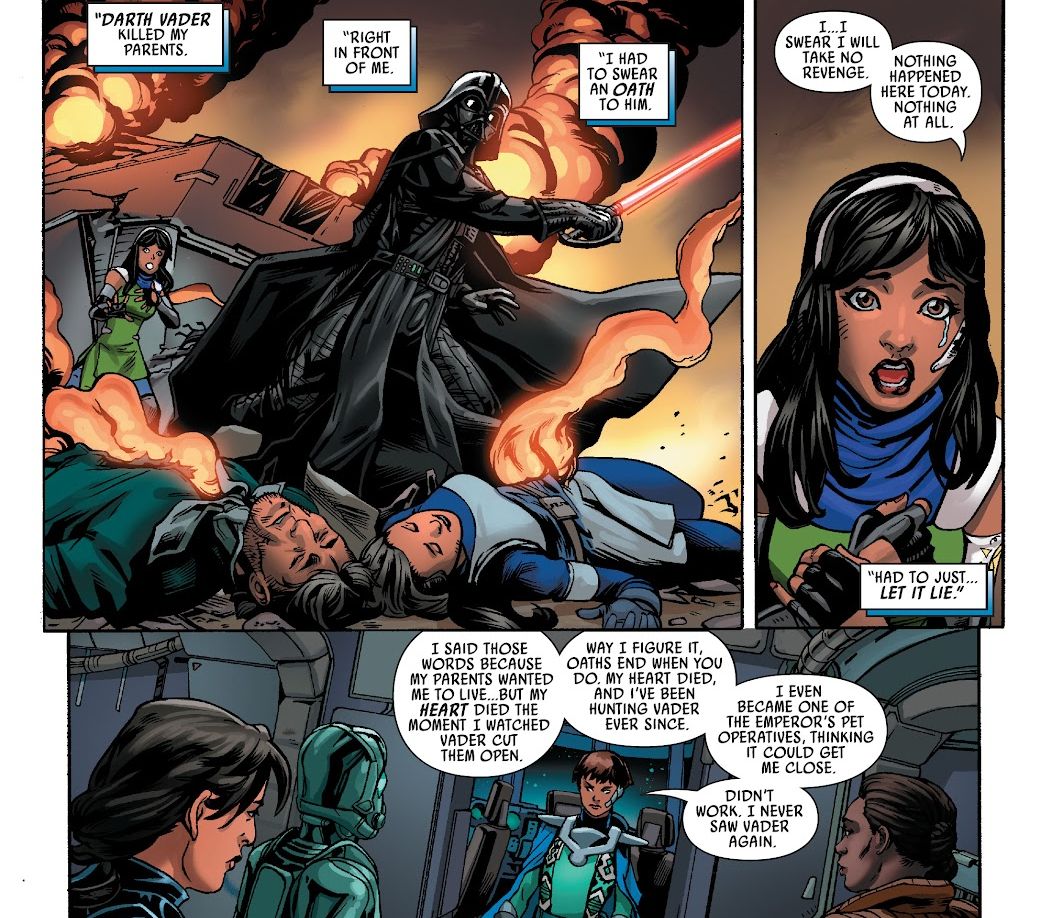 Star Wars: Crimson Reign #1 ends on an ominous note as Qi’ra and the Crimson Dawn reign supreme throughout the galaxy, ruffling some dangerous feathers along the way. The debut issue of this limited series focuses solely on world-building and does a good job of giving each character some space, recapping backstories of some, while leaving others ambiguous. However, plot-wise, the issue leaves much of the heavy lifting on character interactions. Qi’ra remains as charming as ever, as she leads the newly resurrected Crimson Dawn to war. Star Wars: Crimson Reign #1 plunges a galaxy far, far away into chaos, while promising to bring a new age of rebellion.