Hello! I’m back. So since the end of Non-Stop (I’ll never get over that oxymoron) and the delay of Symbiote I have been MIA. Now I’m back finally to bring you fine people the conclusion to Crossroads. The latest David/Land collaboration that explores Peter’s symbiote days. This arc quickly turned into an MCU road trip with Spider-Man and Hulk along for the ride, can the creative team recover and give us a satisfactory ending? Let’s find out. 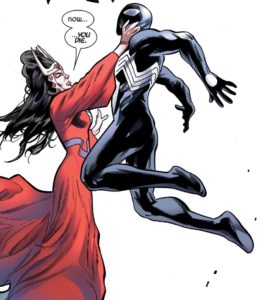 Spider-Man, Hulk and Icarus team up to stop Karnilla from using the Norm stone to obtain Odin like powers.

Being the polite gentlemen that they are Spider-Man, Icarus and the Hulk decide to attack Karnilla in single file. Hulk’s strength and Icarus’ Superman eyes are no match against Karnilla’s godlike powers. Leaving Spider-Man to trip her up using a web snare. That made me smile that a simple attack could be so effective in these other worldly circumstances – though it doesn’t last and Spidey joins the others in defeat.

In a rematch Icarus and Hulk team-up and attack together. Spider-Man comes to and finds the Black Cat offering to help (more on her arrival later). Spider-man’s Spider Sense warn him that there’s danger around and he and Black Cat venture into a cave to explore. They find the Norms, Karnilla’s subjects, and they convince them to help defeat the mad Queen.

Outside the fight continues. It’s well choreographed by Land, and there is a funny series of events where Hulk is referred to by other Marvel character names such as “thing” or a “beast”. Hulk correctly points out “Hulk is Hulk”. The fight ultimately ends with a whimper as Odin himself arrives and quickly removes the Norm stone from Karnilla leaving her in  tears. Odin was summoned by the Norms.

Before the consequences of the story can really be explored Spider-Man and Black Cat are transported back to New York and the Hulk is returned to the Crossroads. It’s as if the whole thing didn’t happen. 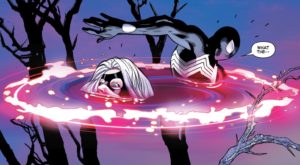 Well there’s been no announcement of a Black Cat/Doctor Strange team-up book, so I have to wonder why we even bothered.

There interactions in this issue were not as fun as they had been as they seem to have arrived at the same page. As Strange works to bring Spidey home he agrees to help Black Cat join him in the Norm world to help the fight.

While not on show this issue, the interaction between these two we’re definitely the highlight of the arc.

Following the fight Hulk and Icarus stand shoulder to shoulder. Brothers in arms, before the Hulk without a thought punches him off panel. I don’t think you need to spend too long researching the images Land traced for that gag. I laughed, I admit it. 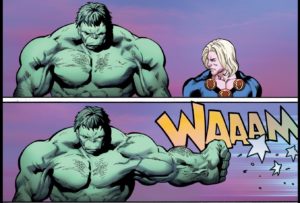 This series has hit the point of diminishing returns. I like the first arc and thought the second was a clever way of developing the series. Though King in Black and Crossroads have potentially pushed the premises to its limit. How many  secret adventures can Peter have between the six issues of Amazing he actually wore the symbiote? Each arc takes him out of New York (whether that’s an alternate reality, space or a mystical realm), but as Peter moves away from his surroundings the stories lose their potency. I wouldn’t mind a final arc to wrap up the series, but I’d want to return to the smaller scale stories from the original mini series.

What did you think of Symbiote Spider-Man? Let me know in the comments!