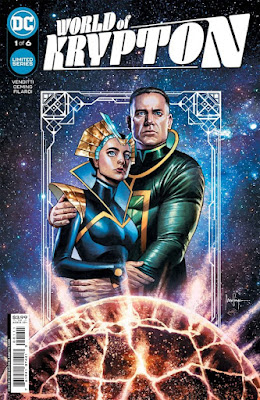 World of Krypton #1 came out last week and was a wonderfully unexpected holiday present. I didn’t know I wanted this. I wasn’t sure I’d like it. But let me tell you, this first issue was a winner.

I am a middle-aged man who has been reading comics for more than 40 years. I have read many versions of Krypton’s history. I have even read prior mini-series called World of Krypton. Was I ready to hear another take? And remember, Brian Michael Bendis even rewrote some of this just a couple of years ago, shoving Rogol Zaar into the mix.

I shouldn’t be surprised that writer Robert Venditti just nails it. I have liked all the stuff I have read of his. The Superman ’78 book is a joy. His take on Krypton’s history feels classic and fresh at the same time. How wonderful to see Jor and Zor friendly with each other again. I have one of those nagging ‘Anj mystery’ feelings about something happening here. And I get the sense this might be the best recent interpretation of Kara in a long time.
Michael Avon Oeming is on art. He has a style which works for me even if I know he is an acquired taste. I like how his Krypton feels like Byrne’s aesthetic albeit with a bit more flair. His take on the Kryptonian landscape is slick. And the action plays out very well.
No complaints here. None.
On to the book. 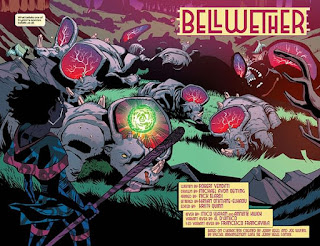 We start with a Kryptonian naturalist/scientist Nira-Ur in the Jewel Mountain range!
She is surprised to find a brood of Thought Beasts in the area. But when she stumbles on to them, they have all died, the destruction of Krypton visible on their head screens.
I am glad we are back to classic Thought Beast anatomy with the crazy triceratops like head shield showing what they are thinking.  But how interesting that somehow these animals are so in touch with the world and what is happening that they predict the destruction.
Remember, we are probably 15 years away from the destruction.
Already, with a Jewel Mountain and a thought beast reference makes this immediately feel classic. But also, seeing Nira Ur in a sort of jungle fatigues with a walking staff feels fresh. Krypton has often seemed cold and cerebral. To see a scientist sort of going native and living with the animals like Jane Goodall feels very new. 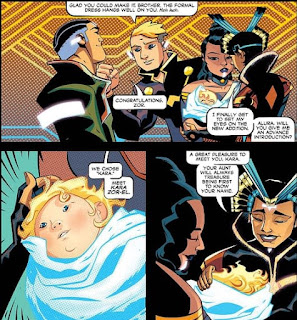 Flash forward three weeks and we are at a naming ceremony for our Supergirl.
There is a ton to unpack here but I’ll start with the art and aesthetics. No doubt this is sort of based on Byrne looking at Lara’s head gear. The pages play out with panel borders that look sometimes like computer windows. I love seeing blond Zor-El again.
And then the interplay with the El family. Perfect. Jor and Zor are friends and scientists. They seem like they love each other’s company. None of the angsty Zor we have been fed since the New 52. And Jor-El seems to say that he and Lara are partners in work. So maybe we are back to the astronaut scientist Lara again.
So all this seems classic.

But there is a new feel now. The Els almost feel like nobility. This feels more classic in politics with houses and grudges than the ‘there are five guilds’ sterile stuff that has been around in the last few years.
Lastly, look at that cute Kara and her half smile! 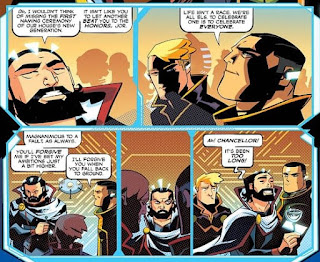 All isn’t completely well with the Els. Kru-El the ‘black sheep cousin’ shows up to the affair. It is clear that Kru is arrogant and wants to be a social climber. He even sort of tries to bash his cousins for their complacency. Jor’s retort is biting and on target. I love it.
Now I know that Kru classically ends up in the Phantom Zone after creating a cache of illegal weapons. So my spider-sense is tingling. Adding Kru again gives this that classic feel.

Then Dru-Zod shows up, the General.
It was fascinating to see him being embraced as a friend by Jor and Zor. I will have to look back to see if they have been bosom colleagues before.

But this Zod seems different than the one I am used to. He seems scarred by what he has seen and weary of battle. He is going to retire. Now that is a very innovative take … if you believe it.
More on this later. 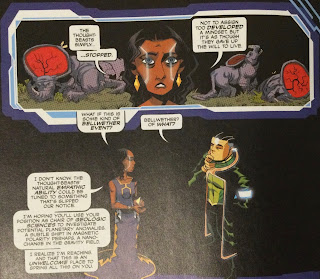 Nira-Ur arrives at the party and tells Jor about her thought beast findings and how it worries her.
Assuming we are not shaking things up too much, Kara is a teenager when she is rocketed off with Kal.  I always put her at about 15 or so. So this is about as early a warning as you can get. Imagine the thought beasts being so in tune with the planet they died 15 years before!
I also like that Jor is head of the Geologic Sciences, something I think was true in the Bronze Age. It would explain his studying the planet. 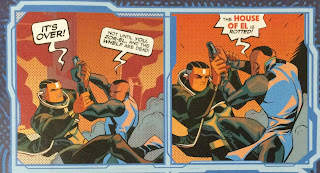 At the ceremony, some of the waiters turn out to be assassins. The House of El is rotten. Jor, Zor, and Kara must all die.
Oeming brings a nice dynamism to the proceedings to. It feels real and threatening.
One thing that I noticed is that Jor-El has the feel of an action scientist here, jumping into the fray and doing a decent job brawling with these killers. I don’t want to say it reminded me of Zach Snyder’s Jor-El (I don’t want to be reminded about that movie) but he seems pretty capable here.
Again, the discussion of a ‘rotten’ house sounds like landed barons and internal feuds. Almost Dune-like.
The killers are dispatched. One by suicide. The other shot by Zod.
Hmmm … 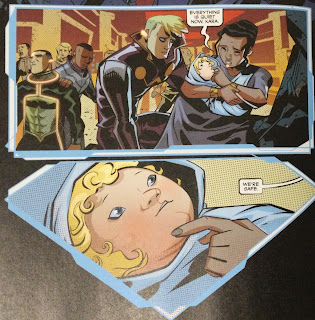 I have felt that Krypton for the most part has been presented very patriarchal. So I did like that Kara was considered a significant target for the killers. She is currently the ‘next in line’ should Jor and Zor be killed. She is basically a princess. The El line would die if she died.
And that ‘we’re safe’ line is rather foreboding given what we know happens.
I truly hope Venditti will give us a bright, smart Kara in this book. I deserve one. 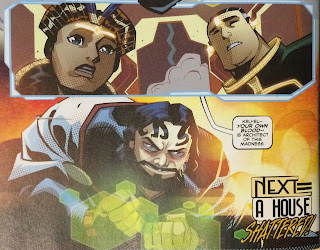 Everyone wonders what could have spurred such dissidents, something unheard of on Krypton.
But Zod throws his lead candidate down in the middle of the party. With all those Els gone, Kru-El would become the head of the house.
If you believe that …
I suppose I am channeling decades of Zod stories. Wouldn’t it be classic of Zod to make a play for power by not only eliminating actual competition (Jor and Zor) but also tarnishing the entire house by saying it was a familial inside job?
I am guessing Zod is behind the whole thing, Kru-El the perfect fall guy. Perhaps that is why Zod killed the last assassin, eliminating the chance that the dissident would talk. I suppose we shall see.
Anyways, I just loved this to bits. A great opening chapter to a story we sort of already know the ending too.
Overall grade: A

FASTER THAN A FART FROM THE FLASH – COVER GALLERY…