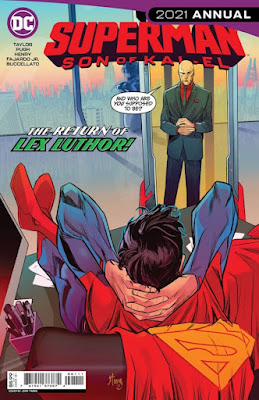 Superman Son of Kal-El Annual 2021 came out this week and was a very entertaining read. We know that Jon has picked up the mantle of Superman. That means he probably is going to have to deal with his father’s rogues. And no one is higher on the totem pole than Lex Luthor.

One of the things that I have been struggling with regarding this comic is the injection of real life social issues into the stories and the rather easy way that writer Tom Taylor has been dealing with them. There has only been superficial looks at complex issues. This issue also tangentially touches on a world crisis and the story-telling approach is different. More on that later.

But the bulk of the issue is looking at Lex. We see Luthor’s relationship and interactions with Clark. And then we get the first interaction with Jon. Moreover, we see just how different Jon’s dealings with Lex are from his father’s. This would be something I would love to read every month. One thing I loved about the old Super Sons book was the contrast between Jon and Damian. Why not explore how Jon is different from his father when dealing with other heroes, villains, and the world.
The art is split by Clayton Henry and Steve Pugh. Henry covers a flashback that shows Kal dealing with Lex. The art is bold and vibrant and bigger than life. It works for the story. Pugh’s work is more fine-lined and refined. I do like his take on Jon who looks young here.
Overall a fun read. On to the specifics. 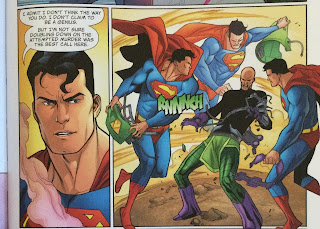 Remember, Lex at one point was a hero in the DCU. Then he became Apex Lex and joined to Legion of Doom and was involved in all that Perpetua nonsense.
I don’t know where this particular flashback takes place But Superman treats Lex like a hero person but it is all a frame-up to prove that Luthor is still a villain.
I love this super-speed scene of Superman removing the Lex-O suit.
And this opening dialogue of Superman not considering himself a genius is an important plot point. Lex feels superior to Superman intellectually. 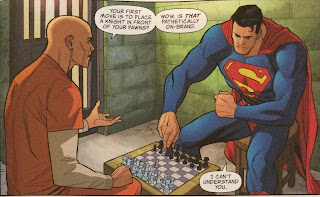 With that, Lex is tossed in jail.

While Superman waits to hear word on a potential witness against Lex disappearing, Luthor challenges him to a chess match. Luthor even belittles Superman’s opening move.
This is a brief but loaded scene.
You get the sense that this game means something to Lex, proof he is better than our hero.
And you get the same sense that Superman could care less about this chess match. But he does wonder why Lex and him never just teamed up and accomplished more together.
I love that Superman is doing whatever the hell he wants with the chess game. It just isn’t important. 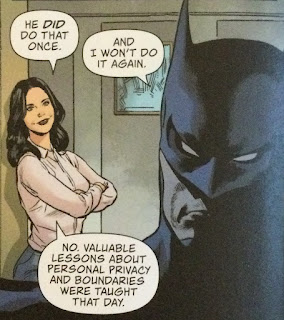 Cut to the present and transition to Steve Pugh’s art.
Batman shows up at the Kent’s door, knocking no less!
When Jon wonders why Batman didn’t just enter via a window, Bats has to admit he walked in on something. I know where my mind went. How funny if Batman walked in on some Clark/Lois amour! 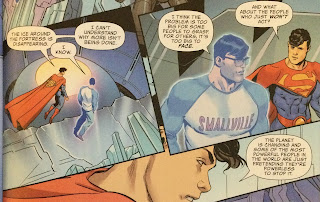 Bruce is there to deliver a Kryptonian crystal to Jon.

Our new Superman heads up to the Fortress. En route, he sees just how much of the polar cap is melting.
The crystal turns out to be an AI Clark designed to chat with Jon. When Jon mentions Climate Change, the AI Clark, says something we all know. It is a huge problem. People don’t know what they can do if anything and the problem is huge.

Jon knows there are people out there who could help who aren’t.
Ahhh … but this is where the conversation ends. Where is the ‘laws be damned, I am doing what’s right’ Jon who dropped the boat of refugees into Metropolis? The Jon that said ‘I am going to Gamorra and yell at the President; who cares about the law!’ Wouldn’t that Jon head to corporations with a huge carbon footprint and confront them? Use his powers to cool the Earth?
Because this IS a huge problem that doesn’t have a photo moment like dropping off the boat. There isn’t an easy answer here. So instead Jon asks other to do something (as we will see).
I will say it again, injecting very real world problems into a super-hero comic is a tight rope act. 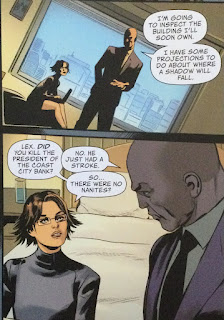 Meanwhile, Lex has been released from prison and blackmails some crime bosses to give him an influx in cash or he will induce a stroke in them with a nanite bomb he has implanted in their bodies. To prove it, he points to a bank manager who didn’t send him funds and who is now in a vegetative state.

I like that Mercy wonders if Lex was just bluffing.
I prefer a calculating and sly Lex much more than the armored guy swinging punches. 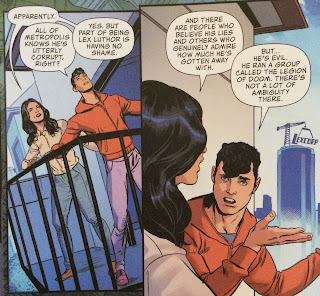 Re-established in Metropolis, Lex sets up his LexCorp tower with a giant logo sign. The sign casts a shadow of his name on the Daily Planet building. That is a nice metaphor for Lex’s control over the news, or his obscuring it.

Lois’ dialogue is also. She says people believe Lex’s lies. Others admire him for getting away with things. That sounds alike people who blindly follow politicians and their rhetoric.
Lex has been a Trump analogue before. Why not again.

While Jon mulls over what to do, Lex is attacked by killer robots. Jon jumps in to help save Lex from the threat.
Taylor does a very good job of adding humor to issue throughout. This ‘not a team-up’ line might be my favorite gag in the book. 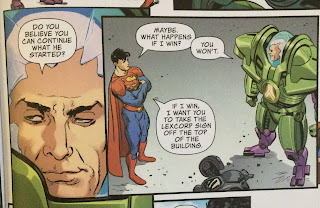 With the robots defeated (and it figured out that they were sent by one of the crime bosses Lex extorted earlier), there is a moment for Jon and Lex to interact.
That first panel, Lex asking if Jon is going to continue his father’s work, is just loaded. Here he is asking if Jon will pick up the chess match Clark started before. But look at that sly look. It also must mean is Jon really ready to defy Lex like his father did. Subtle powerful art by Pugh.
Jon doesn’t back down. There has to be some skin in the game. If Jon wins, he wants the Lexcorp sign down. 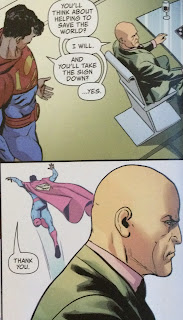 It is great to compare the two chess match scenes.

Remember Clark said he didn’t understand Lex’s world view.
Jon says he understands it completely. Lex wants to control. So why not save the world from Climate Change? Isn’t saving the world and making people owe Lex their lives a sort of control?
That is a very different approach from Jon, trying to nudge Lex’s thoughts towards the light.
It gets even better when Jon beats Lex.
The sign comes down.
But also, maybe instead of teaming up, Lex can just do good. Basically, Jon asked Lex to solve the climate control issue. Hmmm …
That contrast between Clark and Jon in facing off against Lex was really the juice for me. I’d like to see more of this sort of ‘how is this Superman different from the old one’ story.
Overall grade: B+