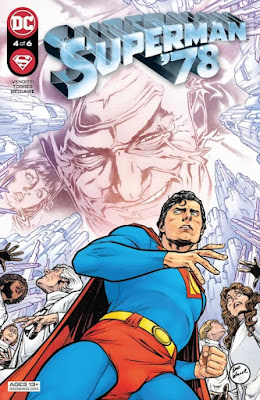 Superman ’78 #4 came out last week. We are on the back half of this mini-series and I already miss it. Robert Venditti and Wilfredo Torres just get it. They seem to understand Superman the way I understand him. I cannot tell you how much I love this book.

Venditti captures the voices of these characters in the Donner universe perfectly. From Lois’ brashness to Luthor’s bombast to Clark’s ‘aw shucks’ Midwest attitude, the book’s dialogue sings. In particular, Luthor’s narcissism is just spot on. I hear Gene Hackman’s voice in my head.
But even beyond those main characters, Venditti has expanded the universe giving us a Brainiac which fits in seamlessly, He gives us an El family which matches the early scenes of the movie.

Most importantly, he gives us Superman.

Meanwhile, Torres captures the universe just as well visually. His lines are clean. The characters look enough like the actors to make this feel like a continuation of the film universe. Even his new additions, like Brainiac ships and drones all look like something that could have been in the movie.
Enough gushing. On to the book.

We open with a flashback.
Millenia ago, Brainiac witnessed the death of Colu.
He vowed he wouldn’t allow other cultures to die as his did. And to maintain that quest, he has gone from organic life form to robot.
That’s a nice wrinkle. I definitely like the idea that it is tragedy that led Brainiac to this more villainous endeavor. He probably thinks its all for the greater good. 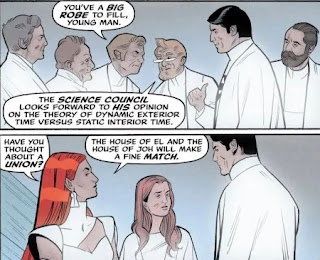 Meanwhile in Kandor, the mantle of leadership is handed over from Jor-El to Kal.
But he is clearly uncomfortable with role. He doesn’t know the culture. He can’t even drink right from their glasses.
Still, the citizens are ready to anoint him. I don’t know if this Kal knows anything about scientific time theories. And I know he isn’t one to jump into romances. I love how this redhead immediately makes her move. Maybe it stirred some Lana memories.

Just like last issue, Superman stresses how he is the Kent’s son, a citizen of Earth, and a product of his upbringing.
He has to get back to Earth and his home.
I hope we get more scenes between Jor-El and him. I can only imagine how much this stings Jor. To find out his son is alive but is rejecting his beginnings could be good grist for the mill.
My Superman is always the man first, the kid Pa taught.

Last month we saw Luthor clearly place something on Superman’s back before he left.
Here we learn the device was an alpha wave detector/transmitter. With that he can track and communicate with Superman.
His reason for helping Superman? He wants to be the one to defeat him. It is that ego that is pure Luthor. And I love how Venditti has him self-proclaim himself all sorts of nicknames … like here when he calls himself the most frightening criminal terror.
Even better is how Lois just stand right up to him. That moxie screams this Lois. 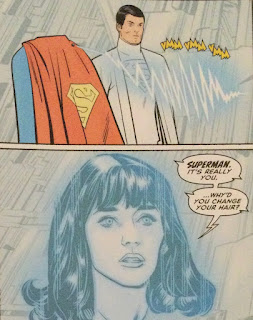 Luthor does get through to Superman. Lois takes over the communication.
I didn’t even notice that Torres has given Kal Clark’s hairstyle in Kandor. This looks like Clark without his glasses. That is brilliant, a subtle touch that Superman is more Clark than Kal, more Clark than Superman even.
Even better is Lois not saying ‘you look like Clark’.

Superman wants Lois to end the transmission. Brainiac will be able to pick up the signal. Suddenly Earth won’t be so primitive to leave alone.
Again, Luthor’s braggadocio is a problem. He wants Brainiac to come back. He wants Brainiac to recognize his brilliance. How short-sighted. With Superman out of the way, Luthor could probably take over unimpeded.
But that hubris is going to bring the threat of Brainiac back. 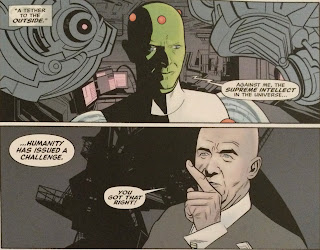 And he just keeps doubling down.
Brainiac isn’t too happy about this ‘challenge’.  And Luthor is proud.
It just reads like Gene Hackman!

When Jor-El examines the alpha wave detector, he thinks he can use it reverse the shrinking effect on Superman alone. It is risky though.
So much of this discussion is great. Lara demanding that her son stay with them. Jor-El talking up the science.
But most importantly is Superman’s response. He takes off the Kryptonian robes and puts his uniform back on. Such a key visual into his thoughts and feelings. He says he has to take the risk to help both Earth and Kandor. But mostly he has to take the chance because that is what Pa told him to do!
Just wonderful. Impeccable.
And that chance couldn’t come at a better time. Brainiac is shrinking Metropolis.
What more can I say, This was an absolute joy to read. Come on DC. Make this an ongoing!
Overall grade: A

A Year of Free Comics: Laugh at both the mundane and supernatural in THANKS. BUT NO THANKS