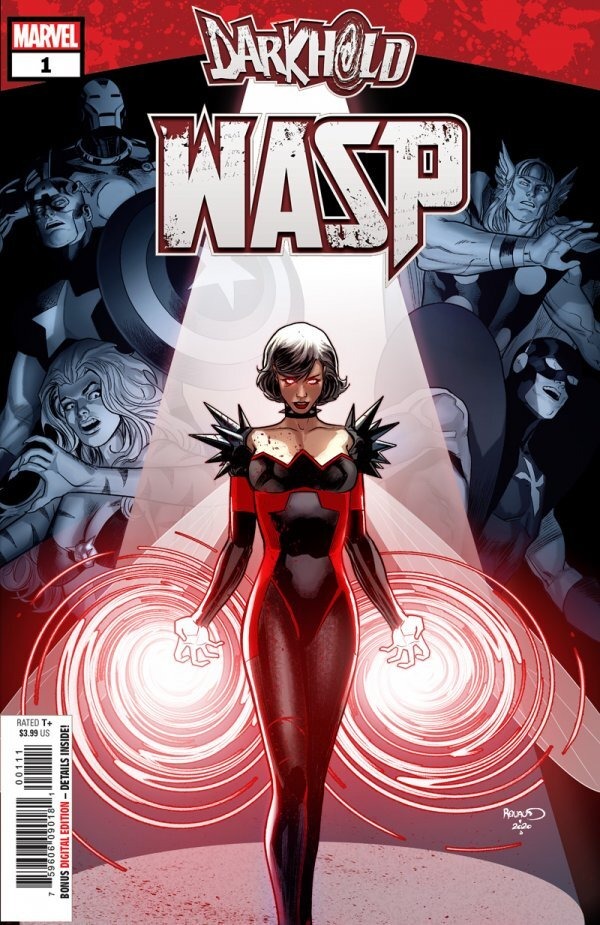 In the latest edition of Darkhold, Bellaire and Roe have taken the opportunity to rewrite the Wasp’s abusive marriage to Ant Man with a feminist murder fantasy perspective. The Darkhold is more than game for a story of this caliber here in “King Maker”. With years of “refrigerator girl” stories, it was only eventual for this story to occur in a way that could even be considered canon, given Roe’s art that gives the panels a pulp that could mostly have been found in the sixties when Van Dyne and Pym were still on amiable terms.

The story describes a woman who ultimately feels shut out of her own life by deciding to join sides with a man who is successful in the realms of the sciences. Van Dyne is a model & socialite, so her career choice has a limited amount of time, while the husband she chose is busy making inventions that can survive longer than her corroding body.
Constantly asking him about his marital ring, guarding secrets about his volatile outbursts and having to cheer on his successes while hiding an innate jealousy – these are the points Bellaire choses to zero-in on to have the reader sympathize this fashion model – socialite who can have any man she chooses due to her status. So that by the time the climax reaches it’s crescendo, oddly, the Darkhold perspective makes it harder to empathize with The Wasp than back when there was a Comics Code since Wonder Woman was only created as a BDSM fantasy for it’s polygamist author who happened to be a psychiatrist who was not ashamed of his kinks.

Victims are not always to be pitied, especially when they put themselves in the situation where they are doomed to be victimized. Yes, The Wasp was married to Ant Man, but she didn’t have to kill him just to be “free”. She could have left him and had the exact same amount of catharsis. Reflecting on a marriage I had once upon a time in my life, I see this woman making the same mistakes my previous mate did : jealousy over the fact that she chose a book smart man, but could never be bothered to open a book unless it was a website owned by Zuckerburg.

For anyone familiar with the Marvel mythology outside of Darkhold, Wasp goes on to date and mate with many of her ex-husband’s friends in front of his face just to further exacerbate the tensions within their relationship instead of exploring psychological counseling or dating outside of her co-workers. For this book to be titled “King Maker” absolutely shows just how delusional the socialite is, leading to further disappointment in an era where a female fresh out of high school can be considered as such by prostituting for $100 a naked picture (on the low-end) while pretending that they actually are a legitimate fashion model. An egg salad sandwich with a cucumber on the side is not what got Hank Pym where he was. The feminist perspective completetly backfires even in the light of Hank’s obvious disrespect towards Janet’s attempts at fawning over him. He shows her in so many ways in public and private that he does not want to be with her. The problem with Van Dyne, as with the only woman I will ever mistakenly my call wife, is an issue with communication.

For a person to see a relationship as a prison, that can only end in death or by leaving that person in a less corporeal sense as freedom, is something that doesn’t take the brains of a physicist to understand that union will not last the long haul. Let alone any other after since the person only knows how to be free outside of themselves. I find it funny that Marvel’s mythology prior to “King Maker” made it easier to demonize Hank, though the perspective was from the lens of male dominance. Now thanks to this paradigm shift, Pym is nearly absolved, while Van Dyne is left looking like the predator who sought out Hank, (an idiot savant who possibly suffers from Asperger’s) as prey. It’s a rule in life one from the streets must learn early : “SHE chose”, and Bellaire & Roe put it in the panels today, the way that a Pimp C verse from the Jive era, or a Shakespeare play off the cusp of the dark ages could only warn a player about.

Out of all the installments of Darkhold so far, “King Maker”‘s merit is one not as fantastical as the others, grounded in a base of reality that all reader’s come face to face with given that relationships (romantic or otherwise) can have a “Darkhold” indeed.