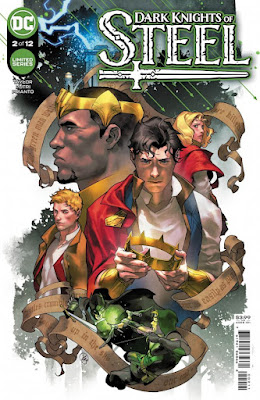 Dark Knights of Steel #2 came out this week and was another wild issue pushing the plot forward at breakneck speed and adding a mystery for me to contemplate. This is a 12 issue mini-series but last issue we had the death of Jor-El and this issue we have another assassination. Can this pace be kept up for the whole story? I can only hope.

Writer Tom Taylor really shines here as I have a solid feeling for this world and these characters already. It is hard to bring that sort of depth so quickly. Yes, we ‘know’ who these characters are but they are also very new. I also appreciate that Taylor is able to bring some echoes of classic DC history into these new proceedings. I won’t bury the lede … there is a sort of Supergirl analogue here. But once again Kara (or here Zala) isn’t shown in the kindest light.
Yasmine Putri brings a lushness to the art here. From medieval action to the drama of the court to dungeons, the work really shines. Things are moody and have the feeling of being torchlit with the colors of Asif Priento. The whole book has the feel of tapestries and oils.
Two issues in and I am pretty engaged. On to the details.

We pick up right where we left off in the last issue. Jor-El is dead on his castle rooftop, an arrow through the eye.
While Lara and Kal grieve over the body, Bruce springs into action with Alfred, catching up to Green Arrow in the forest.

As we learned last issue, Bruce is the bastard son of Jor-El and Martha. So he has the powers to pluck Oliver’s arrows out of the sky. Wonderful action shots here, the rain falling as the skirmish unfolds.
But with his added abilities, Bruce bests Green Arrow.
Solid action here. You feel the speed of Batman as he grabs and breaks the arrows. 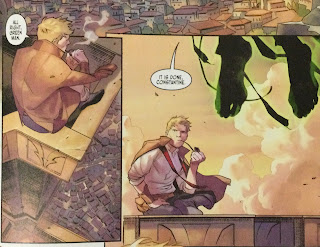 Back in the Kingdom of the Storms, the ‘Green Man’ tells the seer Constantine of Jor-El’s assassination.
Here is the mystery …
We don’t see the Green Man. The assumption is this is a Green Lantern given the energy we have seen him use. But who is it?
Hal?
J’onn?
I have a theory (don’t I always?). More later. 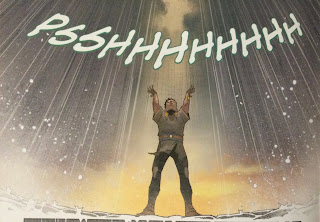 John lets Jefferson know about the killing of Jor-EL.
We also get to see that the Black Lightning family is intact here. Anissa and Jennifer are here as Thunder and Lightning.

But we also meet a new character. Jacob is Jefferson’s son and he has the power to bring on the rain.
This is a nice new wrinkle to the universe. 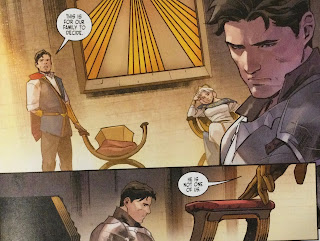 Back in the House of El, the royal family is reeling from this. They know that Pierce is behind the killing. While Kal fumes, Lara slumps in her throne. What should be there next step?
When Bruce is asked his thoughts, Kal shoots him down. Bruce is not royalty. He isn’t one of them. He has no say.
I am telling you again. We will learn that Jor-El arranged the Wayne’s killing. I am sure if it.
And yes, maybe Kal’s sorrow and anger can make this outburst a forgivable offense. But I think Taylor is sowing dissension in the ranks. 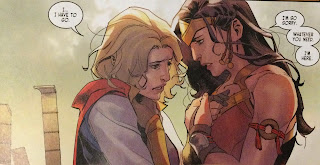 Everyone knows that a war between the Els and the Pierce family will spill into the entire world. And we see some of it when we are brought to Amazon Island. Lois Lane shows up, tells Hippolyta of Jor-El’s death, and asks to tell the Princess.
Now I took the bait and assumed the Princess was Diana. Perhaps Kal and Diana are a couple on this world?
But nope .. it is a solid feint.
The Princess is Zala Jor-El, training with the Amazons. I mean if Jor-El and Lara survived I should have thought of the possibility of them having more children.
Now there can be no denying that this is a Supergirl stand-in. Squint your eyes and Zala could be Kara. The names are close enough.
But what is interesting is the suggested relationship between her and Diana.

Back in the House of El, Kal goes to interrogate Oliver.
Nearby, Bruce and Harley have a tete-a-tete in the pen where the other metas are being held in the dungeon. We see a Flash running around and a King Shark. We even get a Detective Chimp.
Harley seems rather level headed here, maybe the smartest one in the room even if she is the fool.
She knows that Bruce needs to step up and figure out what to do in this situation so the world doesn’t devolve into war. After all, the Els are already locking up innocents.
I’ll say it again. We are going to get a Kal vs. Jon war during this book.
And I love … LOVE … this take on Harley. 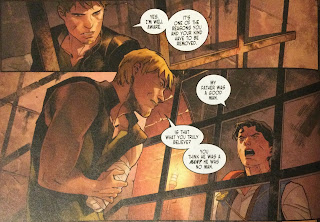 In the dungeon, we see that the threat of Oliver has been removed. One of his arms has been removed.  Can’t shoot a bow that way.
It is a very solid echo to the classic take on Oliver in Frank Miller’s Dark Knight Returns. But in a very nice twist, it is hinted at that Bruce is the one who did this to Green Arrow, not Superman. That is an amazing new rather nuanced warping of the classic DC lore.
But here is the interesting thing. Oliver really rails against the Els and the fact they are aliens. It is the primary reason the Pierce’s are mobilizing against the Els. Because the Els have so much alien power, they can’t be trusted.
That sounds almost like Luthor.
So maybe the Green Man, the one working behind the scenes and manipulating the families, is Lex. That’s my theory and I’m sticking to it. 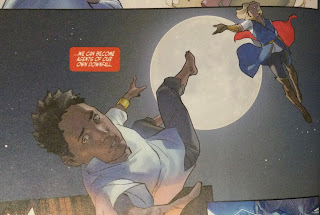 But then something happens that proves that maybe the Pierce’s worries are warranted.
Zala shows up and grabs Jacob.
And then she kills him, dropping him from the sky.
Is it me or does this Zala’s outfit look a bit like the one worn by Kara in the Super-Woman Future State book?
This has been a tough year for me as a Supergirl fan. This semi-version of her doesn’t make things any better. She kills a kid. 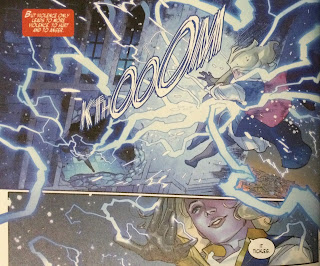 As much as I don’t like her, this was another great moment where Taylor brings in some DC history.
Jefferson blasts Zala with all he has. But she is unharmed. In fact, echoing the classic cover of Superman #32, she says it tickles.
That half smile she is sporting right after killing a child is chilling. Putri lays out this scene wonderfully, from the casual toss of Jacob to the ground to this moment, it is goegeous.
But that is a great cliffhanger.
So kudos to Taylor. He has stoked the flames of this house war very quickly. Two issues in and we have major deaths on both sides. The art is sumptuous. And I have some theories to mull over and see if I am right.
I am in.
If only ‘Supergirl’ was a better person.
Overall grade: B+

The Podcast of Oa Episode 205

LEGO Announces the Back to The Future DeLorean Time Machine Set