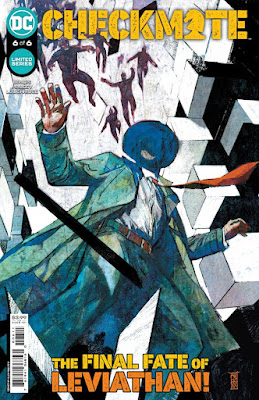 Checkmate #6 came out this week and once again I was wrong in my guess about the big mystery. I also was a bit blindsided by the overall ending here. It came out of nowhere as all beautiful surprises do. I don’t think I have processed the ending here.

This mini-series was troubled from the beginning, the original plot altered when the direction of the DC universe changed. Was this the ending writer Brian Michael Bendis was aiming for? Was this what he wanted to happen to Leviathan? Was this his original choice for ‘Mr. King’?
For me, the most difficult thing about this ending is that a lot of stuff sort of happens that I don’t know if I necessarily follow. Things happen. I don’t know if I know why. And there are still unanswered questions, questions that I fear will remain forever unanswered. What I’d do for the original manuscripts!
Alex Maleev’s art is crisp and bright. But some of the action isn’t necessarily clear by the pictures on the page.
I am still mulling this finale and all of the questions I still have. But my hope is that the wide open ending means more will be someday on the way.
As for who Mr. King is … well spoilers ahead. As well as a brief breakdown.
On to the book.

Last issue ended with Leviathan making their big move.
One of those moves was Talia revealing she has betrayed Checkmate. In the basement of the blacked out Hall Of Justice, she pulls out a working weapon and makes her move. It seems to effect everyone but Kate Spencer Manhunter. Maybe that is because Manhunter tech protects you from Manhunter tech? Not sure.
One thing that is interesting about this series is that the heroes have very little respect for Mark Shaw. Even Manhunter can’t believe Talia would throw in with Shaw. This is especially true given Shaw stole Leviathan from Talia.
It does seem like a bit of an overstep for Talia to reveal herself here when the rest of Checkmate recovers pretty quickly from her blast. They all wade in. I’ll admit, Talia does hold her own. But it is one on many.  She loses and teleports away.
This is also one of those times where the art is gorgeous but tough to unravel. What exactly does Talia’s gun do? 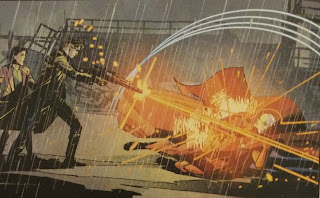 Another part of Leviathan’s end plan is for Mark Shaw himself to take out Lois and Louis Lane.
There is a lot of wild energy being thrown around.
But what is clear is that Shaw’s Leviathan tech seems to malfunction.
Once more, the action is hard to follow. Lane gets some shots in but I’m not sure if Shaw’s malfunction is because of Lane or from something else.
Failing Leviathan tech seems to not be a great protection against a machine gun.
I love the look Maleev gives all this. That is a gorgeous panel with some panels ricocheting all around. Great colors. 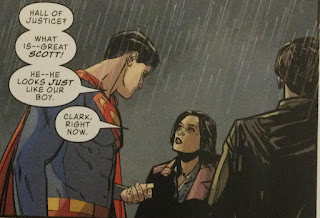 Shaw teleports out. But he is leaking blood. It doesn’t look good.
Lois calls on Superman who shows up and initially thinks Louis Lane is attacking Lois.
Lois gives a quick explanation.
As I have said, between this book and the Justice League, I have lost track of the Daemon Rose timeline. I guess this is the first time Superman has seen him?
And what about this ‘looks just like our boy’ line? Is there more there than a family resemblance? They bold and italicize JUST.
We still don’t know much about Louis. I thought there would be more backstory for him here. Who is his mother? And why ‘snowman’s ticket’? 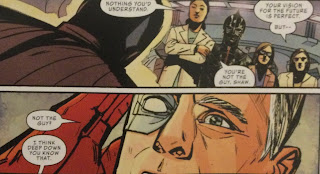 Shaw teleports back to Markovia hoping he can get patched up.
But it is clear there is derision in the ranks of Leviathan.
His higher ups, including Agent Nakamura, disable his Leviathan tech completely. (I suppose it was them interfering with Shaw during his fight. Although maybe they gave Louis an advantage?)
Either way, they bluntly say that Shaw ‘isn’t the guy’.
Talk about a meteoric rise and fall. I mean Shaw was the biggest deal just a couple of years ago, singlehandedly talking down all the espionage agencies in one swoop. He took over a country. He was about to rule the world.

There was one more leg to the Leviathan major attack.
The embedded agent Whitney is inside the depowered Hall of Justice and ready to steal the Heroes Network. But Checkmate is ready for her.
They seem puzzled that she is working for Mark Shaw.
Here is one of those questions that I fear will never be answered. How did Shaw convert all those people? And why are the heroes so dismissive of Shaw as a leader after all he has done? Was it nanites? Hypnosis? Drugs? Or just sheer charisma?
Regardless, the threat is over.

Like dead.
I was shocked.
And the bulk of Leviathan unravels like that. Markovia is Markovia again.
It seems like such a waste. I thought Leviathan was going to be a big deal for years to come! I thought Mark Shaw was going to be a major power player. Instead, he dies from gunfire.
How the mighty have fallen.

It seems like there is nothing left but the wrapup.
Checkmate asks to remain together as a team with funding. They want to be able to function independently. So they ask … Amanda Waller??
And then the reveal. Mr. King is Kamandi.
That seems a bit out of the blue. There weren’t many clues to point me to Kamandi. In fact he never even made it to my odds list. More on this below.
Who would want to be under Waller’s thumb?

I don’t know why they need clearance from Waller but she gives it to them. She says that Checkmate can exist and should exist. But they will answer to the Justice League.
And their first target? Talia Al Ghul. Because she has taken control of Leviathan again. And that group is an even bigger threat. After all, they did just kill Mark Shaw because he was too soft.
So I am glad that Checkmate isn’t done. But I have to ask … did they do anything of importance in their own book? 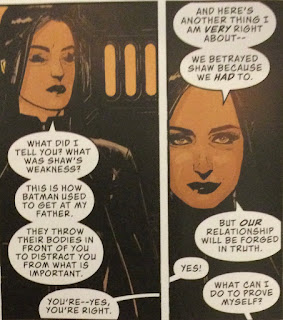 As for Talia, she has control of Leviathan again. But it seems almost like a oligarchy. She won’t get burned by Nakamura and the like. She’ll work with them. And they’ll all work behind the scenes to accomplish their goals.

Is there a Leviathan Army anymore? Or just this little cabal? What about all the infantry? The armada? The credo?

Will there be any lasting consequences from Event Leviathan and Mark Shaw? Will this new Leviathan rear it’s ugly head any time soon?

I guess we’ll have to wait.

And what about the King reveal? 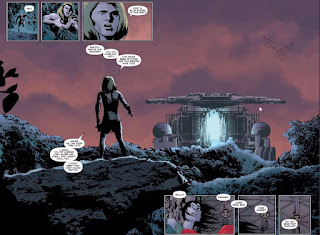 Waller says Kamandi came from the future in one last attempt to stop a bad guy. We know that Kamandi saw Leviathan in the farflung future back in  Millennium: Legion of Super-Heroes #1  . I mean this is how powerful Shaw was … he had a base in the Great Disaster time.

So perhaps I should have remembered this. Maybe this was a hint way back then.
And then there is the name itself. Now this is a metatextual clue. Kingsley Jacobs. King Jack. Kirby.
I suppose his age would be tough for him to answer. I suppose he would have a weird accent giving he’d be talking to animals.
But is Kamandi a master spy? A fighter so accomplished that he could threaten Steve Trevor?
I guess the main question to ask is am I happy with the reveal? I thought Shaw as Leviathan made perfect sense.
Kamandi as King? It’s a solid choice. (Even though I think Paul Kirk or a nameless agent pumped full of Mark Shaw nanites were also solid choices … albeit them as mine).
So what did you all think?
Overall grade: B

Will Black Clover’s New Movie Have an Original Story?