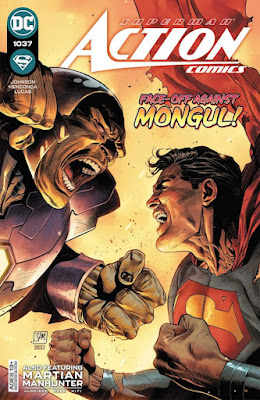 Action Comics #1037 came out this week and was the epitome of the title’s name. This was all action. And I ate it up with a spoon. There are few comics which leave me in a pulse-pounding, ‘what the heck’, giddy mood. This was one of them.

So first off, I have to give kudos to writer Phillip Kennedy Johnson. There is the old chestnut about how creators shouldn’t give the audience what they want, they should give the audience what they need. When this whole storyline was just being hinted at, I lamented the idea of Superman being off world for a long period of time. That isn’t what I wanted. Now, as this whole Warworld saga unfolds, I realize that this is one of the strongest arcs I have read in a while. I didn’t want it but I definitely need it.
Superman and his new Authority arrive on Warworld to find that the new Mongul and his squad are prepared and ready. That leads to some moments that left me gobsmacked. On top of that, there is a new subplot involving the new United Planets that is a wonderful side angle that intrigues me. How can Superman even survive this issue?
Miguel Mendonca is on art for the issue and brings high energy to the whole proceeding. There are some brutal, gory images in this, perfect for an issue which takes place on something called Warworld and visually shows us what the stakes are. Add to that the hazy, bloody tones of  Adriano Lucas and the whole book sings.
Hope you all aren’t missing out on this. On to the details. 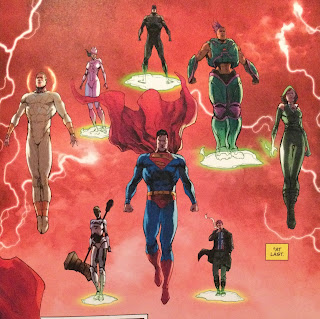 We start out with a scene from the United Planets headquarters. They are bearing witness to the action on Warworld, debating if they should get involved.
But the first panel we see is Superman descending to Warworld with his team behind him. Beautiful image, the heroes floating like angels before a blood red sky. But there can be no denying the homage this is to Kingdom Come.
Which made me dwell more.

First off, whenever Superman looked like this in Kingdom Come, it was almost a savior image. He descended from Heaven with his team and took care of evil. So that feeling works well with our Superman trying to free Warworld.
But then I thought that Kingdom Come is sort of a Ragnarok of the DCU. So maybe this doesn’t bode well. Last issue we learned that the UP President had some sort of grudge against the Phaelosians. He won’t help Superman free Warworld. In fact, he won’t even let it be known that Superman asked for help.

Here we see it play out. The rest of the UP thinks that with Superman leading the way they should join the fray and finally rid the universe of Mongul and Warworld. It seems pretty cut and dry.
But the President uses some fancy words to dissuade them. Better the devil you know. Also, when Warworld is freed, where will the refugees go? Do the UP worlds want to open their borders to ‘cannibals and child-killers’. His words work. The UP will sit back and watch.
A couple of things here. We know very little of the Phaelosians. So what is their connection to Durla? And why this grudge so big that this president would rather have Mongul stick around than free them.
Secondly, the implication of closing borders because you fear the other side of the fence certainly feels ‘real world’. But how much better do these topics work as metaphors and allegories than simply having a superhero dump a boat full of refugees onto a dock and flying away leaving the ordinary folks to work out the details.

With the UP scene behind us, we jump right into the brawl.
Superman flies up to battle Mongul.
The Enchantress squares off against Mother. Initially it looks like Enchantress will just eliminate Mother quickly. But this being, whatever she is, has power. She grows immense, changes into some lamprey looking wraith and devours June. While the imagery is powerful, the tension is built by Mother’s dialogue saying she recognizes Enchantress as two beings in on and she will ‘drink for an age’ on June.
Brrr … 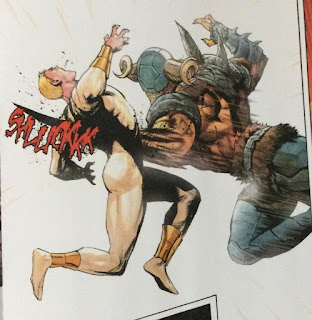 Apollo tries to help Superman but is blocked by the Unmade, bruiser of Mongul’s revenge squad.
In a scene perhaps reminiscent of Batman V Superman’s end fight with Doomsday, Apollo gets skewered.
Just like that, two of the Authority, two of their most powerful are eliminated.
We’ll get back to this in a second.
But clearly, things are real here. Mongul is ready. And the stakes are high. 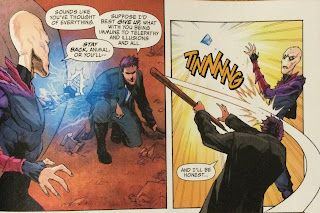 Meanwhile, Manchester Black finds The Teacher skulking on the sidelines of the battle.
It turns out that Teacher is pulling the strings of The Unmade. Black can’t sense any thoughts in the Unmade. It is a puppet.
And Teacher is rather smug as he says he has all sorts of enhancements to block telepathic attacks and a shield to fight off energy attacks.
Of course, Black is wielding a baseball bat. You draw your own conclusions.
I have to say that I am not a fan of Manchester Black at all. But seeing his smug, condescending tone and his gray ethics fighting on Superman’s team is a joy. It is the best of Morrison’s Kipling and Delano’s Constantine rolled into one. He might be my favorite part of this whole story. 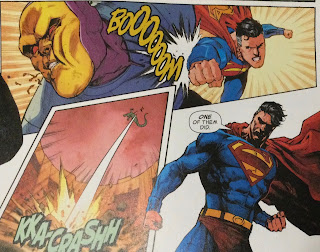 As for Superman, despite his aging/dying/weakening, he is still able to hold his own against Mongul.
Mendonca really flares up the action with that jaw-shattering top panel. And Superman just looks ripped.
But this world is odd, the slaves chanting Mongul’s name. Even Mongul wonders why Superman came to free people who don’t want to be freed. That last panel, that even one person asking for freedom (in this case Thao-La) is enough. Seriously, that last panel is just gorgeous. 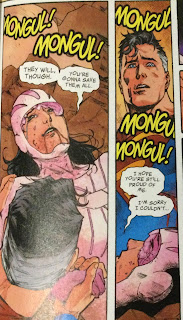 But the chants grow louder.
One of Mongul’s fighters is ‘Darling’, which looks to be a mecha piloted by the ‘baby in a bottle’ we have seen in Mongul’s court.
Lightray mistakes the baby as a hostage and tries to free it only to be pummeled, apparently to death, by Darling.
In her death throes, she tells Superman he is going to save everyone.
That second panel is perfect. As Lightray dies, Superman suddenly sees the stakes of this fight. Maybe he didn’t think it would be this hard. I doubt he thought there would be a body count on his team.
I think that brings the score to Mongul 3, Superman 1.
Now trust me, I doubt Grant Morrison created this Lightray and gave us an enigmatic last page to Superman and the Authority #4 only to allow Johnson to kill her off. She’ll resurrect somehow … right? 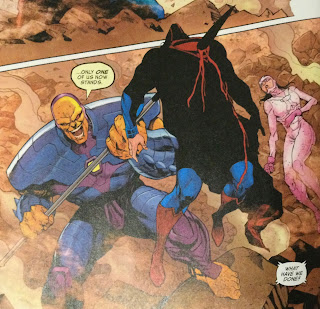 We have learned that the engines of Warworld emit red sun radiation. So the weakening/aging/dying Superman is getting even more depowered. And that allows Mongul to sneak up with his Kryptonite spear and impale Superman through the chest.
Our hero is dead. And the voyeuristic UP leaders wonder if they should have done something.
What a cliffhanger!!!
I want more … now!!!
There is something to unpack here. First off, after reading this, I wondered if Apollo (a Superman analogue) being skewered a few pages back was a bit of foreshadowing.
But more importantly, Superman can’t die. So what happens next? Well, my money is that this being on Mongul’s spear is actually Teacher and that Manchester Black has used his powers to make him look like Superman. This would allow the remaining heroes to slink away and regroup.
Regardless, this issue was a dizzying carnival ride of a brawl and was supremely entertaining. It also ramped up the threat level of this arc. You don’t just kill Apollo and eliminate Enchantress this easily. Incredible.
Can’t wait for next issue.
Overall grade: A+

Yellowjackets’ Cannibalism Could Be its Biggest Red Herring