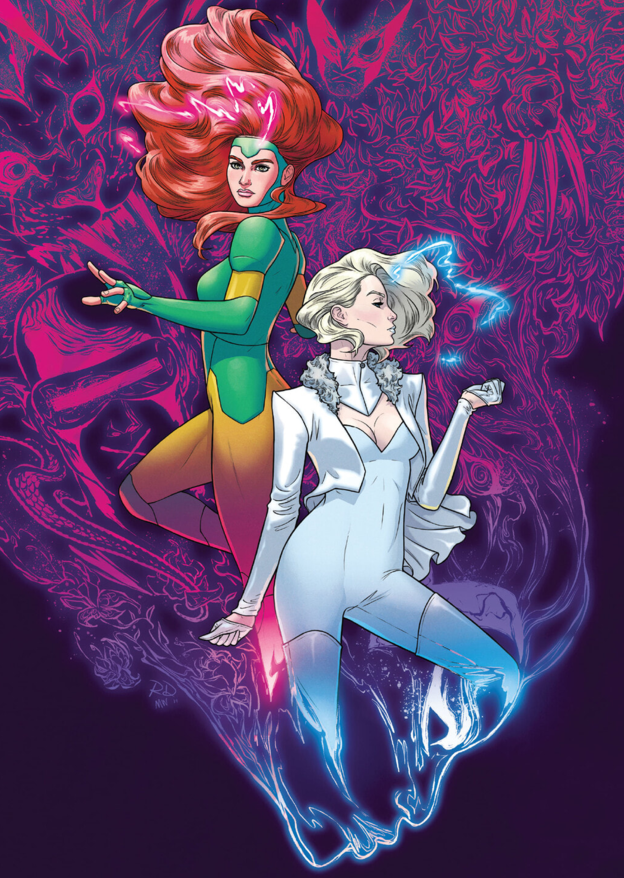 The titular questions mark my skepticism about the success of these three double-sized issues as a story arc. In hindsight, the story we get from these visually gorgeous comics feels like it did at the time of publication: Hickman really beginning to toss too many spinning plates into the air and seemingly letting them fade away into the stratosphere. I think we can assume that the question of the long-deflated mystery of Doug, mutantkind’s various techno-organic nightmares, and now, what was initially a camp joke from Morrison—Ultimaton, or Weapon XV—must await Hickman’s eventual return to the X Office. Oh well!

More in this series!

What is this story arc’s real focus? It’s certainly not really Storm, not as a fully realized character. And it’s not Fantomex either, even though all told most the interest seems to be with his mysterious background, which is here tied in a roundabout way into the core conflict Hickman set up with HOX/POX and X-Men #1: We’ve gone from his introduction of the future homo novissima, posthumans created by melding technology with human genetics in some way, to the return of the Children of the Vault, more powerful posthumans created in a time-accelerated pocket universe, and now we have the analogous environment, the World (inside the Dome), where the Weapon Plus program bred its later super-soldier creations utilizing Sentinel microtechnology. These posthumans aren’t cyborgs; machines are so deeply enmeshed into their makeup that they’re self-sustaining evolutionary offshoots of humanity. (This also means that they couldn’t breed with baseline humanity. For now, I’m going to leave John Sublime, Weapon Plus’s architect, out of the discussion, because there’s no indication that this ancient, sentient bacterium is important to understanding this story—or any other important narrative post-Morrison.) 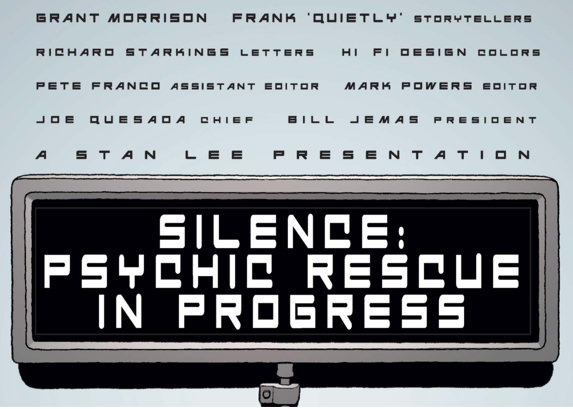 [Note the punning misspell of Quitely’s name! This was just one of many Marvel comics released in Feb 2002 with no dialogue, as a gimmick; this issue of Morrison’s New X-Men is the one fans still remember.] 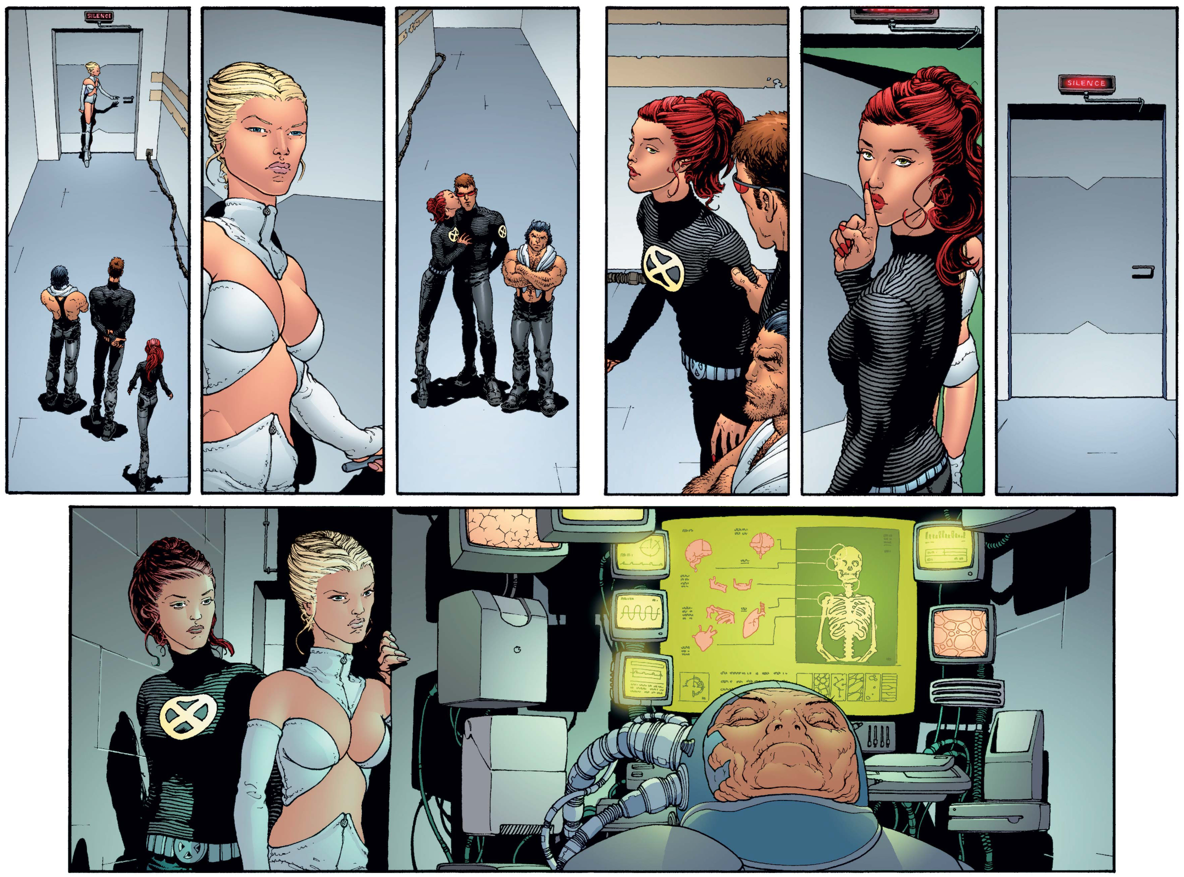 Of course, in contrast to the turn-of-the-century mainstreaming of the once-edgy cyberpunk style (which Quitely had certainly mastered), artists Dauterman and Wilson bring the lush 2010s aesthetic style that they’d pioneered on Jason Aaron’s Mighty Thor. This works much better with rescuing Storm as the goal; this isn’t a rehash of the story of psychic and body horror that Morrison aimed to put Xavier through. 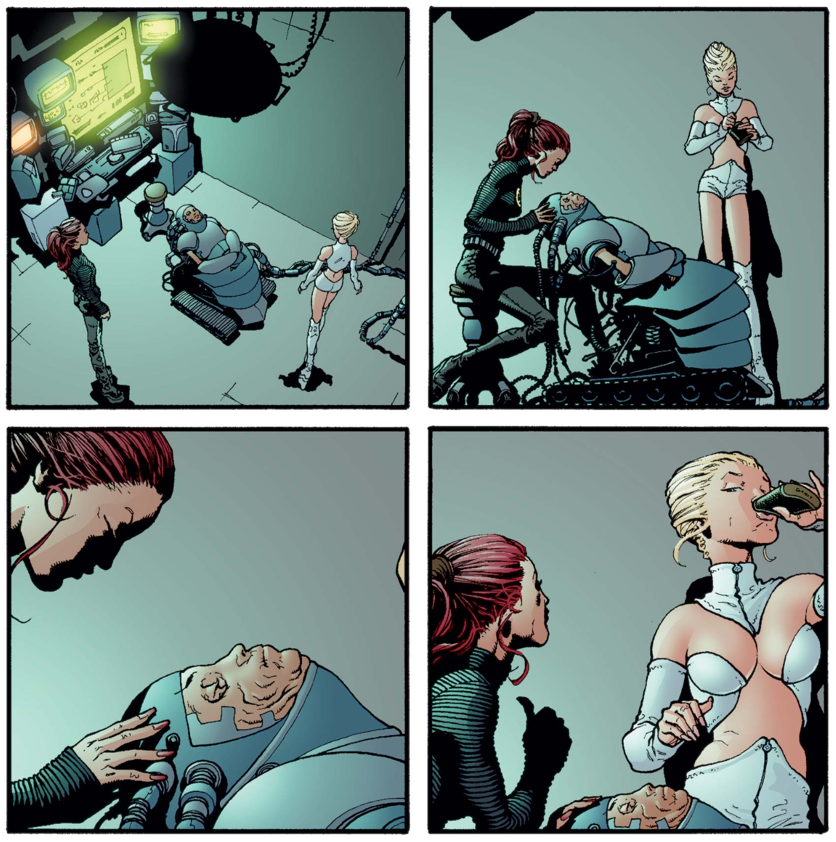 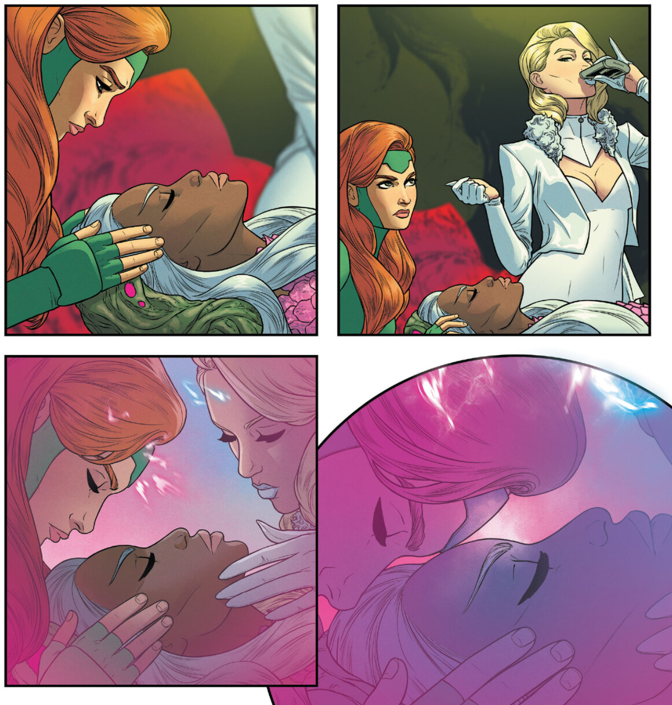 Still, some of the imagery here would make for great album art for an electro prog vaporwave outfit or similar. 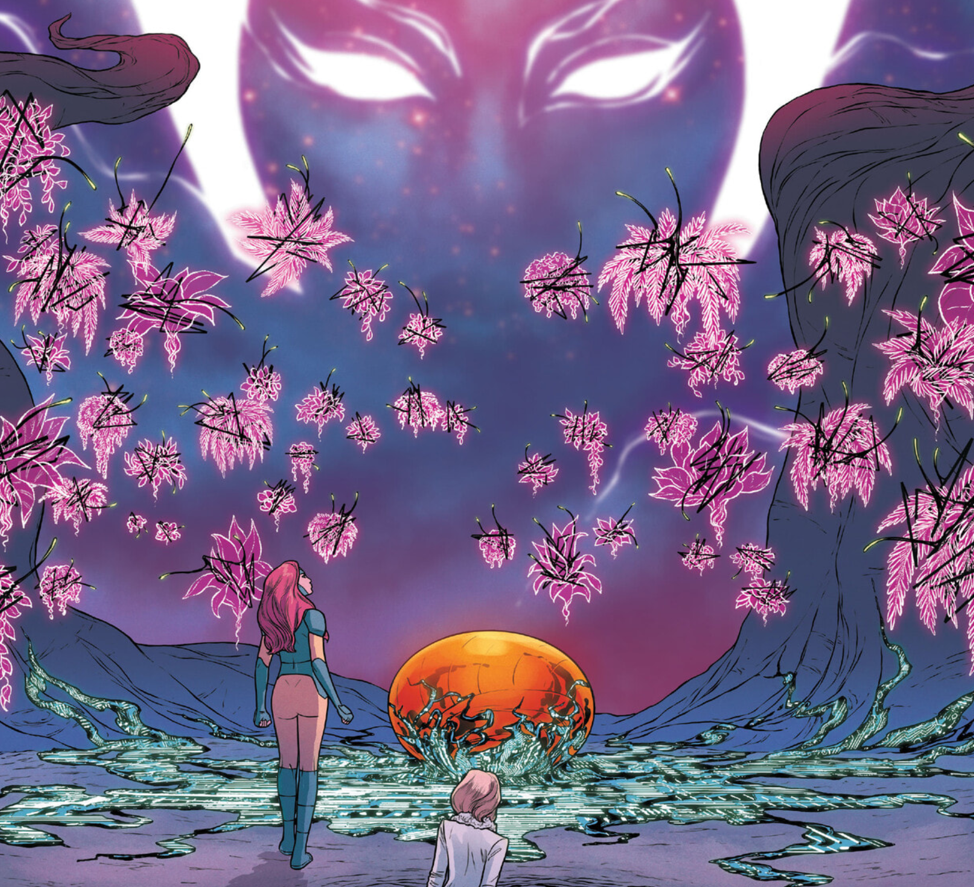 In the early aughts, Morrison and Quitely were going for something more goth industrial, Cabaret Voltaire; part of what was so fabulous about this era was that it was the old underground going big time: 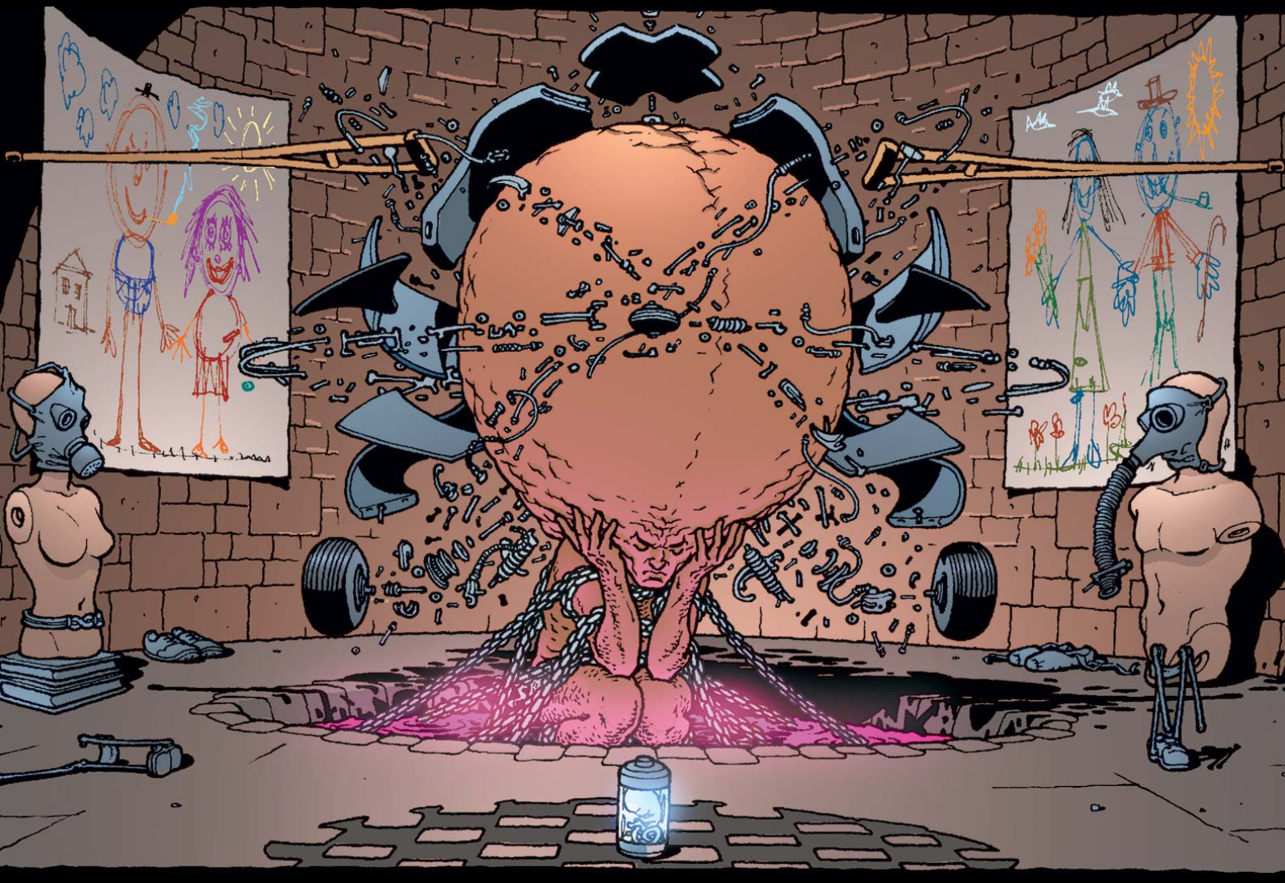 ((And oh dear, cyberpunk and leather went mainstream without a true revolution in the offing? No surprise there, which is why you couldn’t call it selling out—there was no real (social) movement to sell out!

To me, this is where the problem with this loving homage lies: Beyond the gorgeous and clever homage, what’s the point? To be clear, any Dauterman comic is worth the price of admission—but otherwise, there’s just not that much going on here, except that Storm’s first Krakoa-era showcase has her at death’s door. Sure, she gets better in her self-titled Giant-Size, but the context and venue have so little to do with anything characteristic to Storm that it feels like a waste of talent.

At least Al Ewing is doing something refreshingly new with the beloved character in his S.W.O.R.D. title—and hopefully anything else he does with Arakko-on-Mars. It is lame that Storm had to wait so long to even begin getting her due in the Krakoa era.

Still, the best part of this issue is where Jean and Emma work to persuade Storm’s mindscape guardians of their friendliness, with Emma providing the laughs at her own expense, just as she did in New X-Men #121. 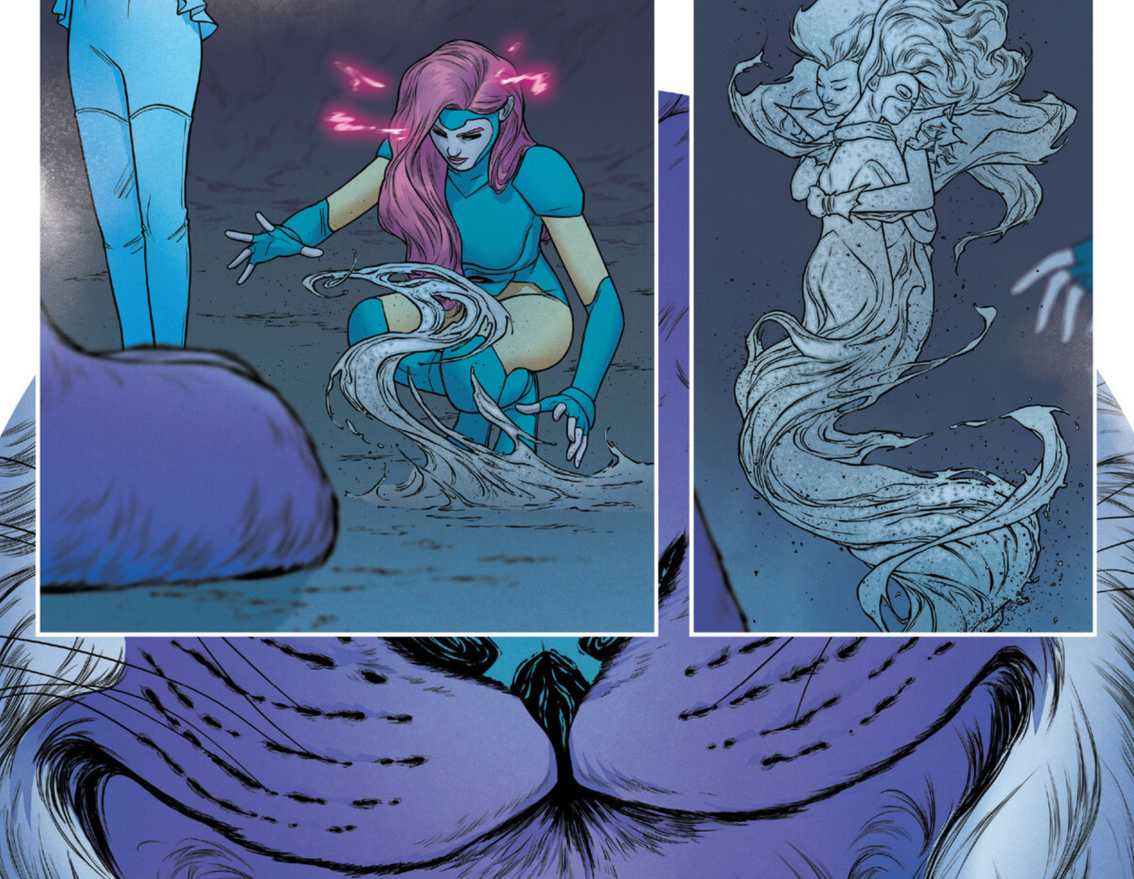 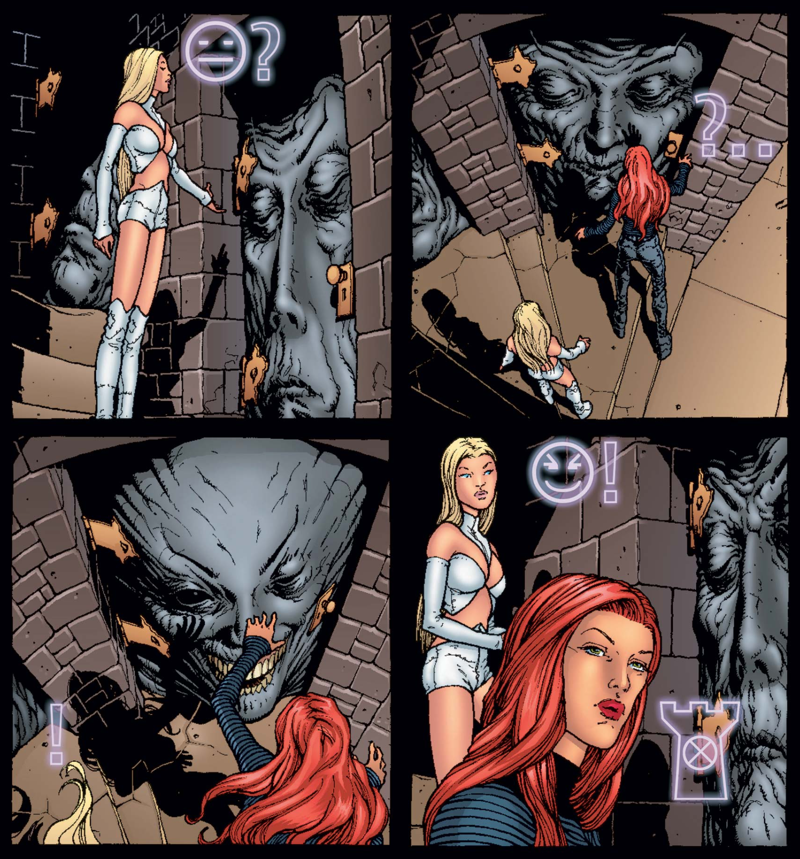 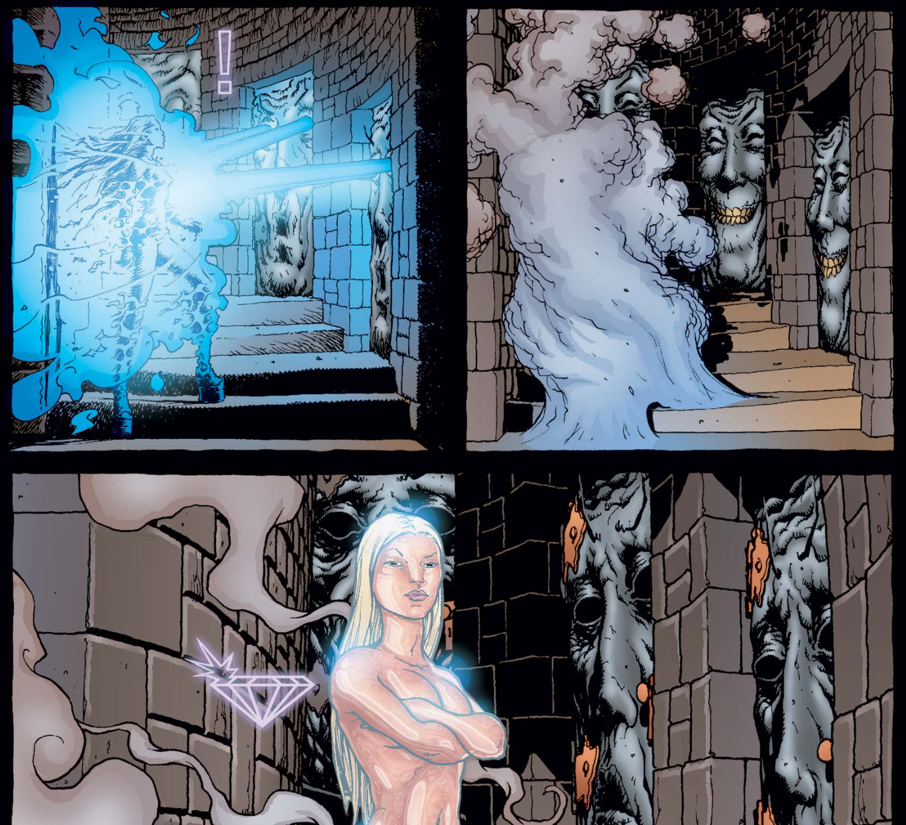 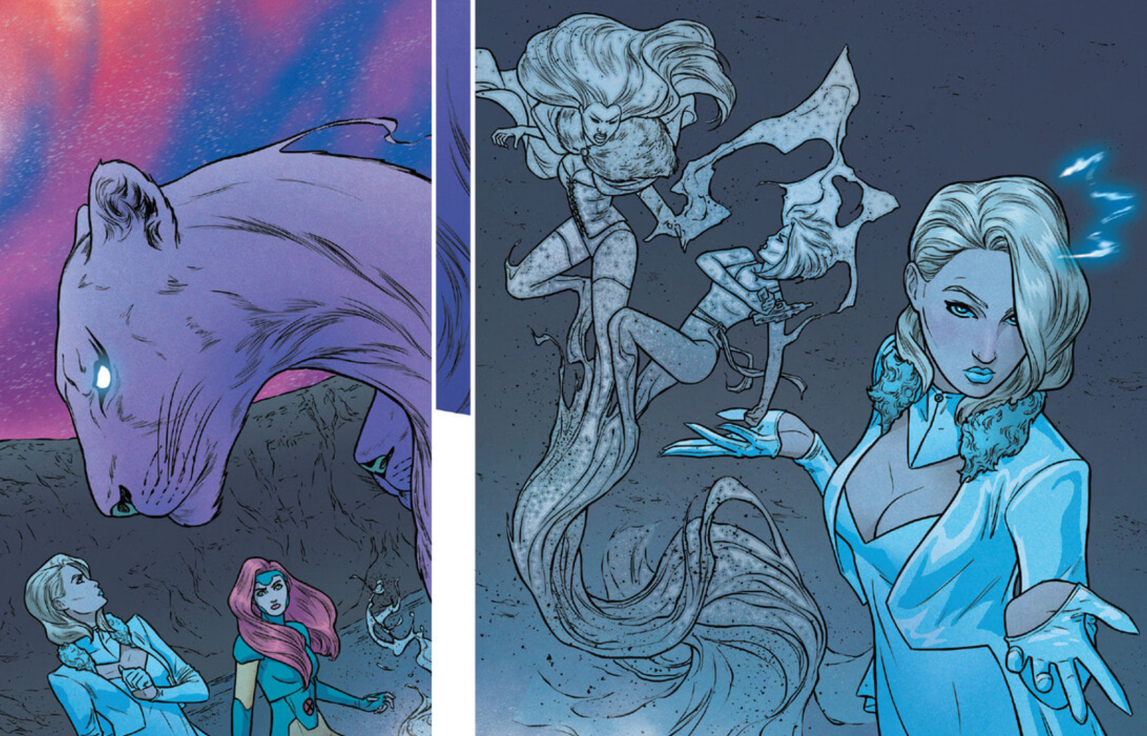 But at least Emma actually helped out this time—and she and Jean are on much better terms these days. 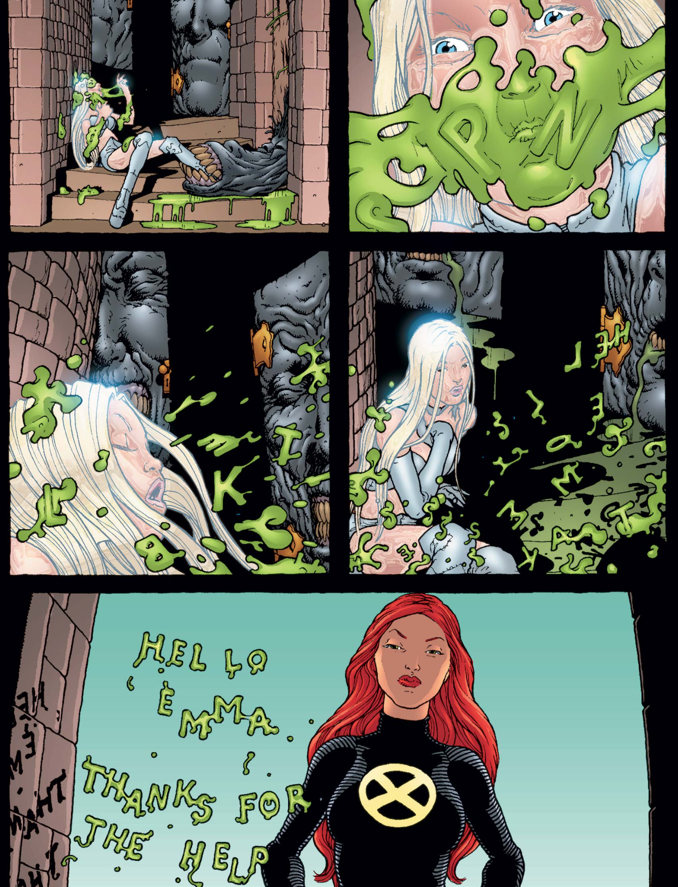 II. Next Stop: The World

What does Storm’s infection have to do with Storm? Nothing. Why is the cure for it only to be found where Fantomex is from? Because Hickman wants the World in play—and housing a transmode virus whose provenance is from an unusual source, the Children of the Vault. Hickman’s conceit here is that those classic Carey posthumans are now doubly linked to his dystopian futures experienced by Moira. Uncanny thematic resonance, as well as the safekeeping of a potential enemy, ally, or tool in the captured techno-organic entity, seems to be this story arc’s raison d’être.

But now what does Fantomex himself necessarily have to do with this safekeeping? Well, not much. Yet clearly he wants to be close to his twin—that’s a new twist here—and Ultimaton is thoroughly bound up with the World. Undoubtedly, then, these two will play a vital role when homo novissima’s chickens come home to roost—Ned, too, probably.

Which all sounds a lot more fun than the grim-dark endgame I imagined while reading HOX/POX. However, I’m sure when the denouement comes it will be played fully serious. It’s still funny to remember that Fantomex, when initially introduced in Morrison’s New X-Men #128 in 2002, was a high-camp joke, a parodic melding of ’90s gun-toting merc bad boy and psychedelic ’60s New Wave/crime noir aesthetics. It’s right there in the name—Fantomex, a Morrison homage to Fantômas, France’s pulp crime-fiction icon from the early to mid-20th century, authentically vintage and classy in a way Charlie-Cluster 7 could only ever dream of being. 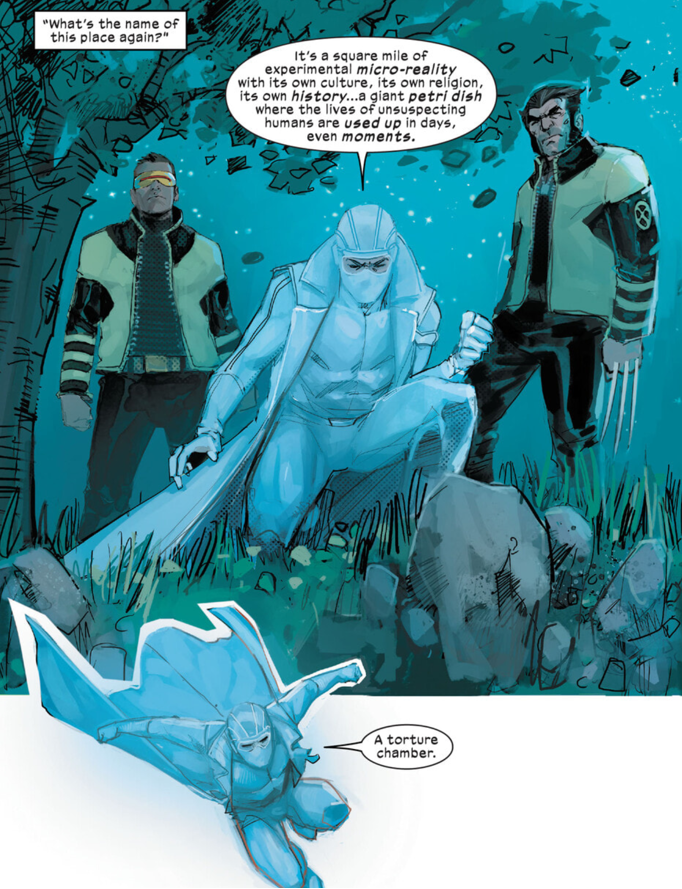 That’s the point though. He’s an amalgam of an entire century of antiheroic thieves and heisters. ’90s-style, he was born in a torture chamber—the World. All the unfamiliar reader needs to know here is that Fantomex, like Wolverine, is a creation of the Weapon Plus program; however, as their thirteenth success in creating a living weapon, Fantomex comes out of a more advanced version of the program than Logan, who was Weapon X (Ten). With Weapons XII-XVI, the program confined these subjects to the World, the time-accelerated pocket dimension that it’s immediately identifiable from its securely domed exterior, which Hickman riffed on in his Ultimate universe analogue called (wait for it…) the Dome (which is somewhere in England). This was where the Children of Tomorrow were bred, also echoing the Children of the Vault—and these alt environments are now triangulated through the lens of HOX/POX.

In the case of Weapon Plus and starting with Fantomex, they bred super-soldiers by melding human forms with Sentinel microtechnology, in a dimension where the future comes much, much faster. This backstory can be found in Grant Morrison’s classic Fantomex story arc, “Assault on Weapon Plus” [New X-Men #142-145], drawn by Chris Bachalo with quirky Kirbyesque steampunk designs for Ultimaton and the little we see of the World, which has since been depicted in whatever way suits an artist’s imagination. 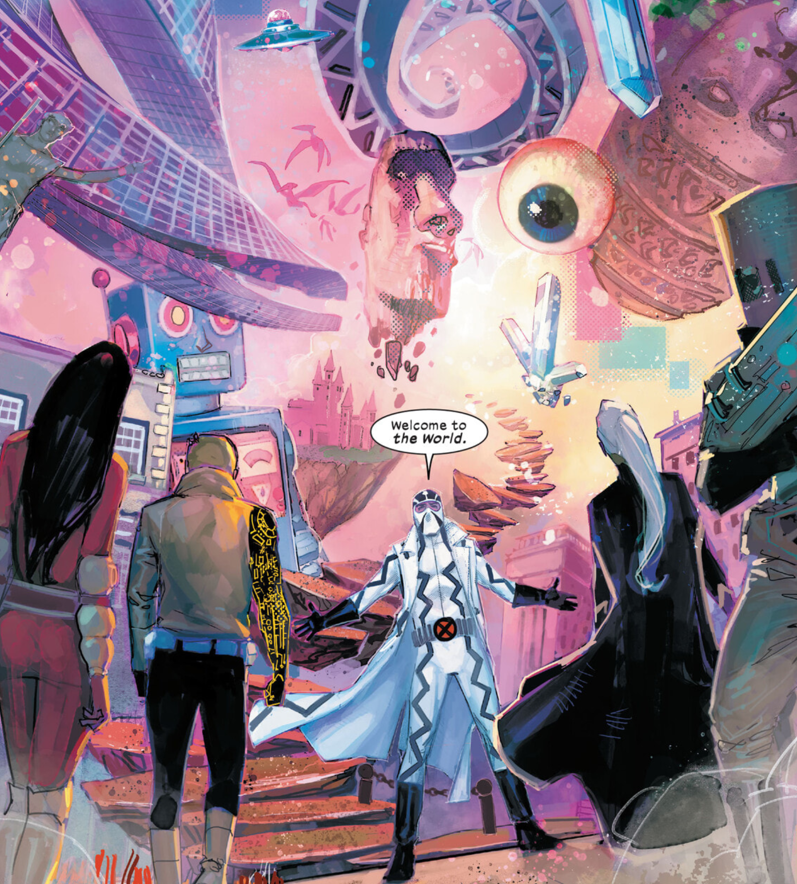 The big revelation here—if you can call it that—is that Fantomex is a wildly freak clone of Ultimaton. Presumably, it’s not the other way around because while Fantomex’s many masks vary only slightly, one sports a diamond shape, the one he’s wearing on the Giant-Size cover, in fact. Of course, many readers will immediately think of Sinister instead. Which—who knows, maybe Hickman’s suggesting a connection here, or it could reasonably be sly misdirection. Either way, we don’t have anything to go on there. We can guess, though, that Ultimaton’s birth or place on the assembly line came first, also because his Bachalo helmet bears a circular port-thing. 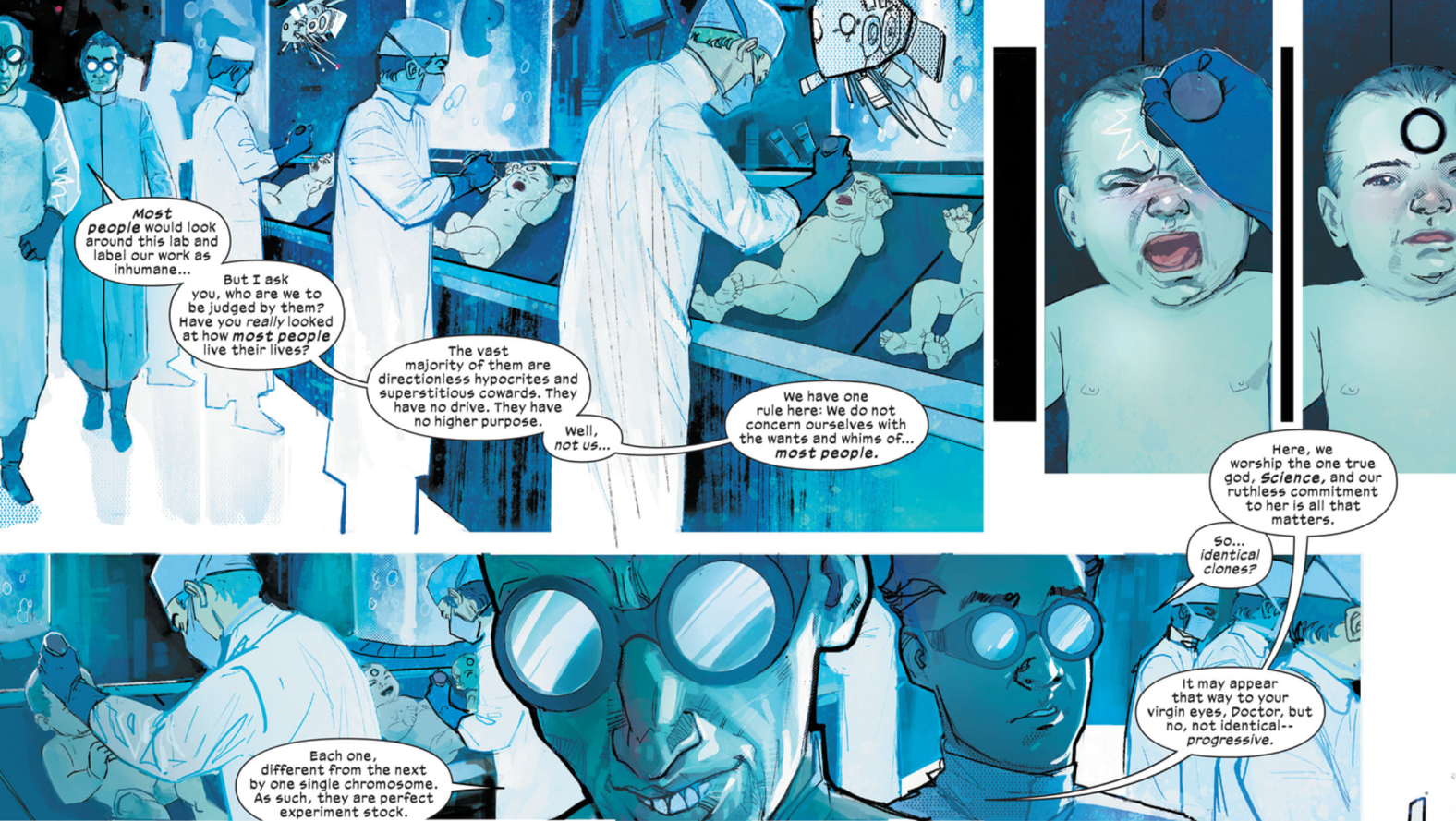 However, we don’t know at first that Fantomex’s double here is Ultimaton. Here for the first time, Ultimaton is depicted wearing his identifiable Bachalo costume without the fully concealing helmet, which always made him feel menacingly abstract and alien. (This little reveal comes at the end of the failed raid with the one-off, parodically ’90s-style Humonganauts as duped companions.)

We also find out that every decade, Fantomex has sought to break back into the World to see if his twin wants to bail too. Oddly, the boy who will become Ultimaton is far behind the adult Fantomex age-wise—even though the World experiences time at an accelerated rate, like the Children in their Vault.

Fantomex never gives up, but Ultimaton always has the same answer: He’s not going anywhere. Presumably, it’s the early ’60s when he tricks Captain Fury’s Howling Commandos into the World (it’s not WWII). Come the ’70s, Ultimaton has physically caught up with Fantomex. Note that Ultimaton talks about raising children here, echoing the Children of the Vault and Hickman’s own Ultimate U Children of Tomorrow. 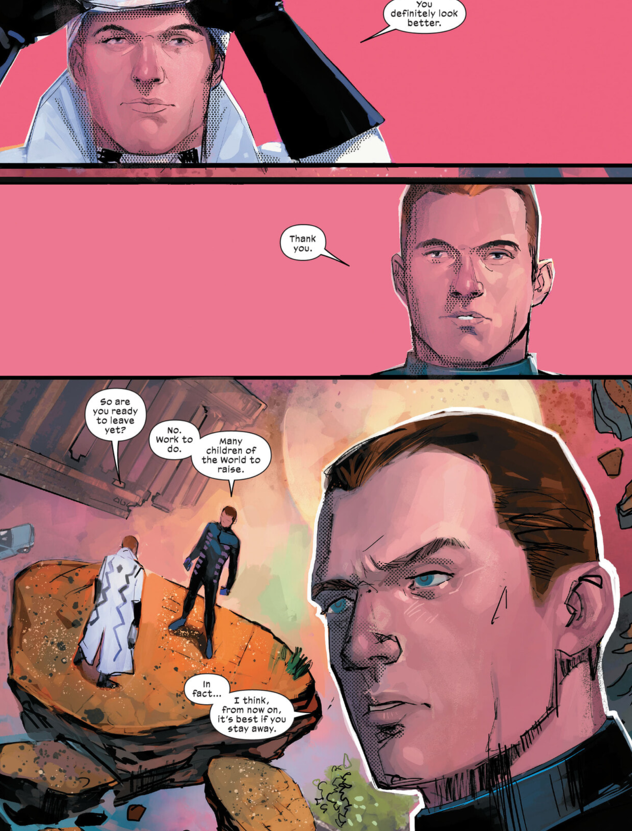 Skipping out on the ’80s to soak up some Mediterranean or tropic sun, Fantomex’s next doomed heist isn’t for another 20 years, and it goes even worse than before. Funny that his ultimate caper is aimed at convincing his “brother” to leave the World—though Fantomex, once out of the high-octane action, is barely trying here; he’s making no effort to win hearts and minds, except if it might involve self-flattery (as above). But now Ultimaton is completely beyond Charlie-Cluster 7; that shock for him must be doubled by the fact that he must be hiding from/evading his own true nature if he’s really Ultimaton’s double. 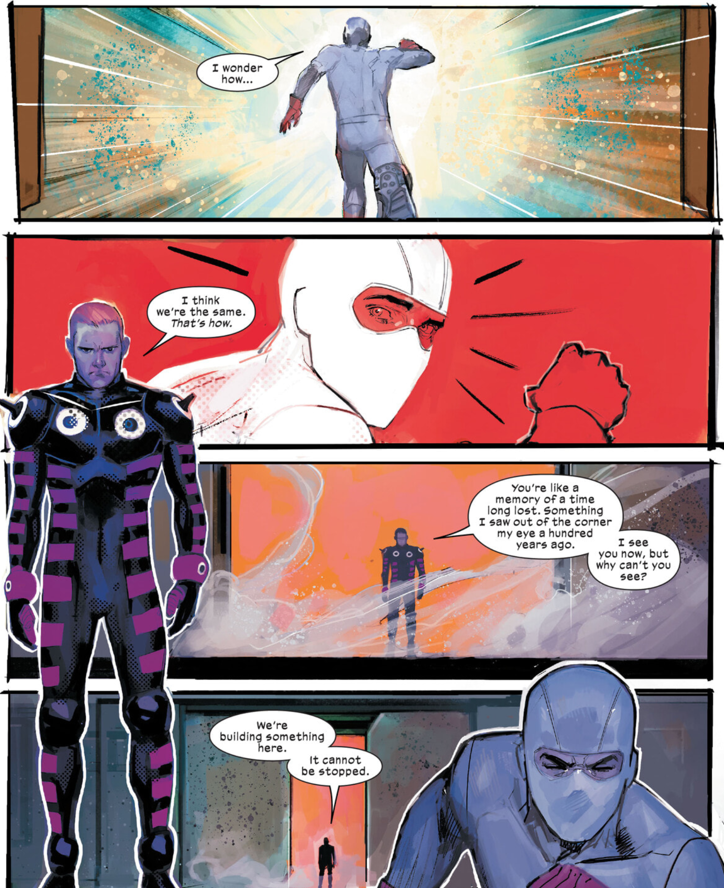 In Fantomex’s next raid on the Dome, we have a scene pulled verbatim from “Assault on Weapon Plus,” where Ultimaton stands revealed as the World’s architect and its ruin, cryptically meaning that though he isn’t the World’s actual inventor, he did take it over at some point, remaking it and briefly escaping to seek answers in an outside world he hadn’t known existed. 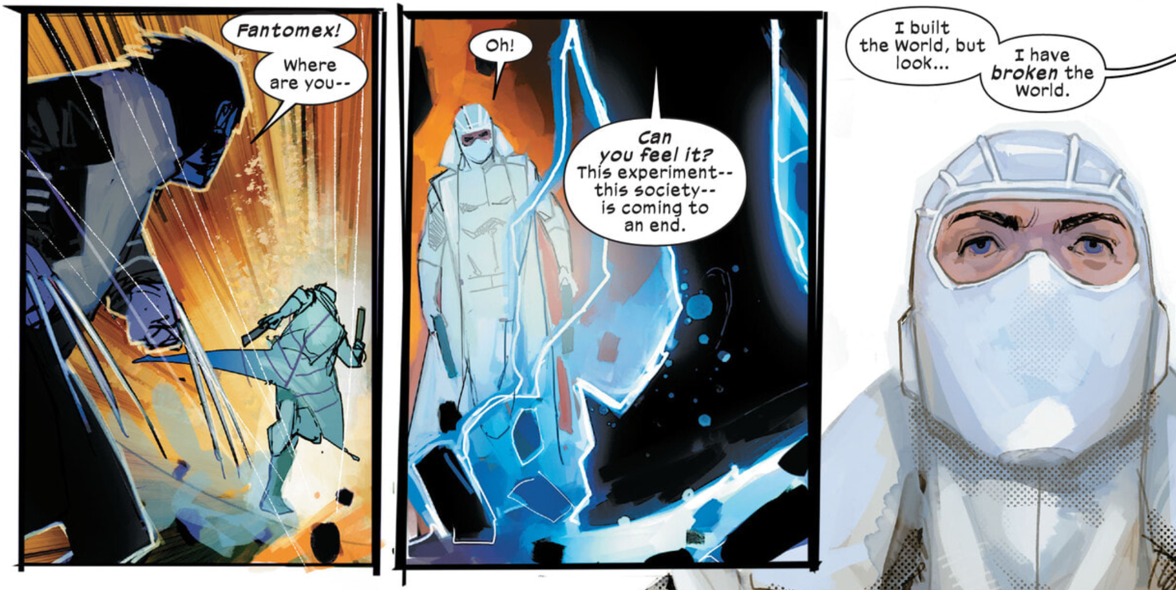 The Walking Dead’s Tom Payne Rejected Jesus Line: “I Refused to Do It”