Diary and memoir comics have become an extremely popular genre for cartoonists, especially in the form of webcomics or as Instagram posts. What’s odd to me about this is that their ideal form is as a temporary way of helping cartoonists get through writer’s block and helping them get over being too precious with their line. The classic four-panel, daily set-up forces cartoonists to crystalize the quotidian moments of their day into a narrative of some kind, complete with panel-to-panel transitions in order to create a kind of rhythm. While James Kochalka popularized the daily diary strip, Lynda Barry has spoken about how and why they’re useful. Specifically, she talked about them having a limited shelf life; ideally, they should last no more than a year. 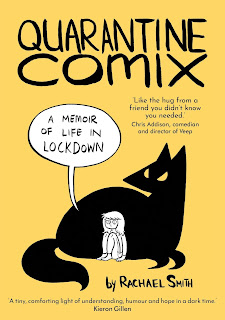 Anything more than that, and you start to find it to be an overwhelming grind. Your line starts to break down. In essence, you are hacking them out. There are other ways in which such strips can wear out their welcome, especially if they drop any sense of narrative, or even worse, settle into a kind of smugness. That can be smug self-deprecation (this is intolerable, especially when this devolves into humblebrags) or a total lack of awareness regarding privilege. No matter how good you are, no one wants to read about your dreams, your cool kids, or the love of your life for years. Make no mistake: though diary comics are drawn from one’s real life experiences, they are not the same thing as real life. They are a crafted narrative, and making those strips without regard for an audience is a guaranteed way to deliver something that becomes rote and twee. (Note: Kochalka.)

So when I started Rachael Smith’s Quarantine Comix, it was with a bit of trepidation that it might be more of the same. Fortunately, Smith has a lot of tricks in her bag. First and foremost, she had COVID and the pandemic to work off of, and reactions to the first few months of quarantine are interesting. Second, she had a built-in narrative of being separated from her boyfriend because of the pandemic and how she coped with that. When they reunited, she didn’t go much further; in part, I’m guessing, because there was no real story there. Third, Quarantine Comix is part of a continuum of autobiographical comics about her mental illness, along with Wired Up Wrong and Stand In Your Power. It’s funny to read Smith talk about her own self-doubts and occasional self-loathing, considering how bad-ass she writes some of her fictional characters (though they have flaws as well). That includes the trope of a black dog representing her negative self-talk and self-loathing, and a white dog representing a more rational way of looking at yourself. In the context of DBT, this is a Wise Mind approach, where you acknowledge the negative feelings but try to connect them to something more rational. It’s an approach woven into the strips here. 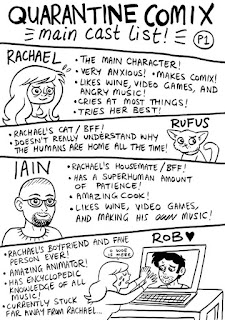 There’s more to recommend about this book, even if in terms of its observations and events, it is extremely mundane. That’s because of circumstance, of course, but the observations mostly stay simple and on a surface level. Smith is funny and tries to add a punchline to as many of her observations as she can. She also eschews the four-panel grid on every page, often adding or subtracting panels, based on what the story needs. There are also full-color pages that are just illustrations of overall themes. There’s one other key to the book’s success: Smith doesn’t date her strips, nor does she feel the need to include a strip from every day. That’s often the curse of a diary strip that’s gone on too long. Also, this technique spoke to the amorphous nature of time when typical structures like work and weekends started to become meaningless.

Smith’s drawing is charming and exaggerated, frequently adding to the humor of each piece. Like any good diary comic, there are subtle background elements that are more pronounced if one thinks about them. There’s an underlying sense of worry about Smith’s mental health from her family and friends, and it’s clear that some of her friends make it their mission to check in on her. Some of the humor (like talking to her cat and it talking back) is a little on the contrived side, forcing gags on situations where there aren’t really any. Worse, some of the anecdotes seemed to be used because a punchline seemed to be there, but the joke wasn’t really strong enough to justify it.

However, it’s Smith’s perseverance in the face of despair, ennui, and fear that’s the real star of the show. In many ways, it’s a class in how to seek out help with a mental illness, as Smith reaches out to friends and family, is gentle with herself as much as possible regarding productivity, and is even relatively sanguine about weight gain. The eventual reward, when she’s reunited with her boyfriend, feels entirely earned, especially as she’s respected the laws regarding the lockdown. While a large part of the book’s appeal is its status as a historical curiosity (something that will become of greater interest as time marches on, I suspect), Smith’s understanding of her own mental health issues and willingness to talk about them in public makes this a powerful work of graphic medicine in the guise of a very funny set of anecdotes.