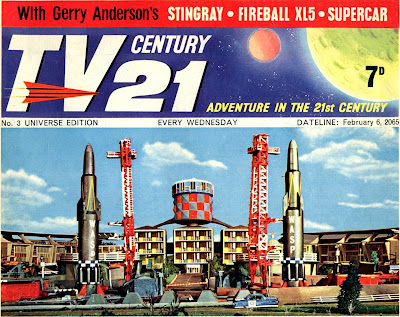 Long ago and far away, in a dimension which can be accessed only through the mystical portals of memory, I popped into the neighbourhood newsagents on my way to school one day and purchased a copy of TV CENTURY 21 #3.  Within this great comic, paradoxically dated a hundred years in the future, was a sheet of card from which could be pressed out a model of FIREBALL XL5. 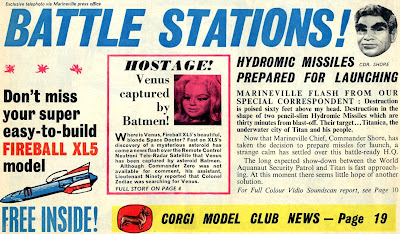 When I got to school, before lessons began I sat and assembled the folded pieces into their predetermined shape while my teacher and classmates looked on, fascinated.  I wasn’t one who particularly enjoyed being the object of of such rapt attention, but I was so engrossed in what I was doing that I paid them scant heed and just got on with it.  When I had finished and the teacher had expressed approbation for the fruits of my labour, lessons began, and although I couldn’t tell you anything else that happened that day, that particular moment is a fond recollection nigh-on forty-eight years after the fact.
I never saw that cardboard ‘model’ from childhood again until nearly twenty years later, when it was reproduced in black and white on the back cover of  S.I.G., a magazine devoted to the puppet programmes of GERRY ANDERSON.  I remember thinking that it was a shame it wasn’t in colour and hoping that someone would one day get around to producing a proper facsimile of this free gift which I greatly coveted.

Well, almost three decades on, someone has finally done it.  Printed on card (though not perforated for pressing out), it enables nostalgists like myself to relive a part of our cherished childhood and bridge the span between past, present and future. Future?  Sure – after all, the comic was dated February 6th, 2065, so technically it’s not due to be published for another fifty-six years.  Thanks to a rift in time and space, however, I managed to obtain a replacement for the actual comic a good while back.  It’s immensely satisfying to finally be able to reunite it with a copy of its original free gift after so long a period.
Suddenly I’m an eager five year-old child once more, sitting in a chalk-dusty classroom in a different century – when the one we now live in was  the stuff of dreams and seemed too far away to even contemplate.