Today we will be taking a look at The Scorpion Takes a Bride in AMAZING SPIDER-MAN vol. 1 Annual #18 by Stan Lee (that’s right), Tom DeFalco and Ron Frenz from 1984. 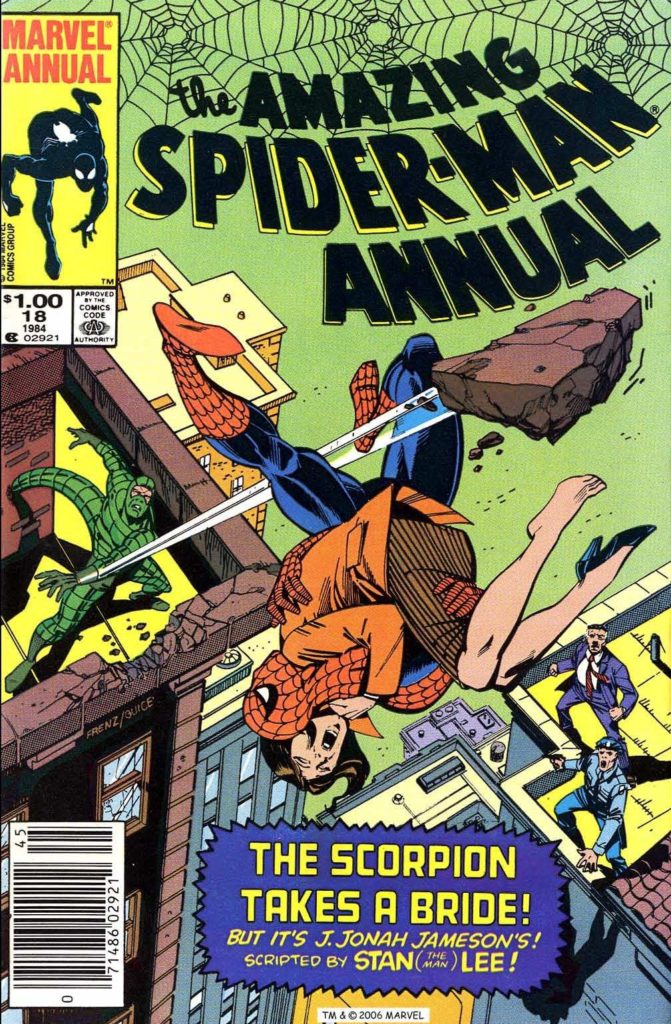 Out of Spider-Man’s many memorable signature rogues, I maintain that Mac Gargan/The Scorpion had one of the strongest debuts in AMAZING SPIDER-MAN vol. 1 #20. 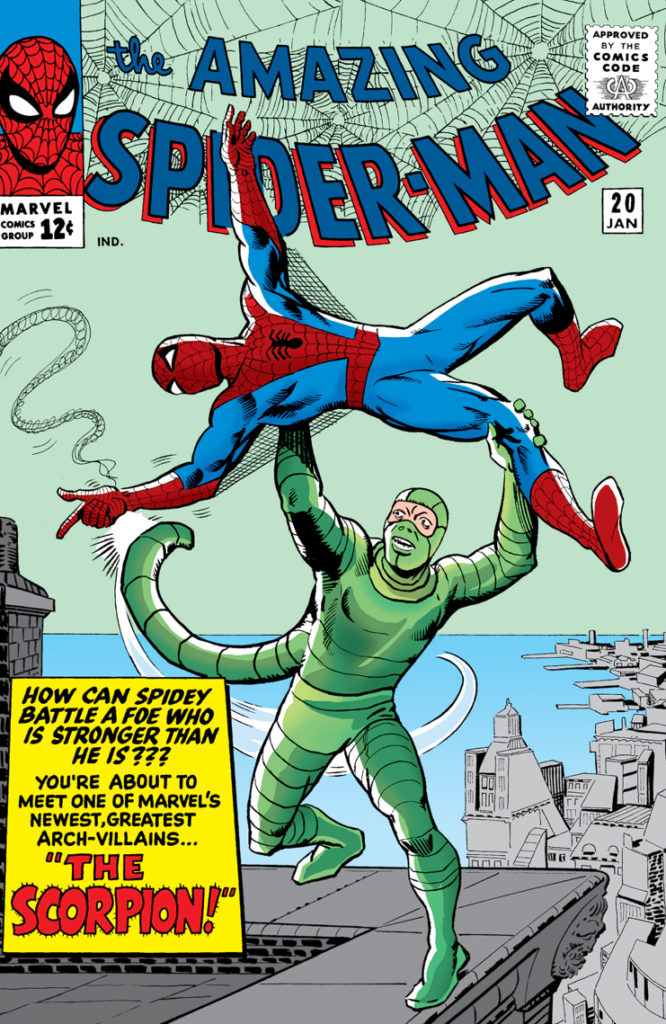 Hired by J. Jonah Jameson to undergo a procedure that would make him even stronger than Spider-Man, Gargan became The Scorpion and actually managed to best the web-head in a fight…twice in a row! 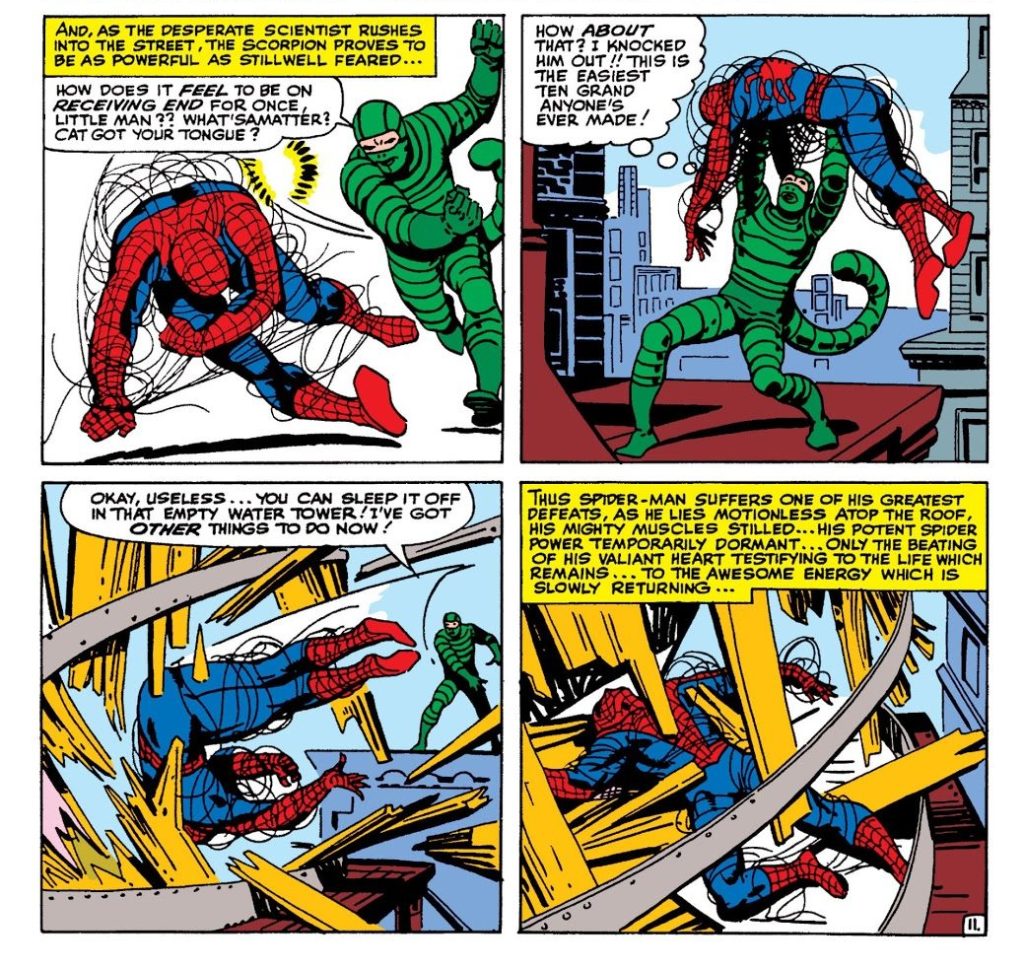 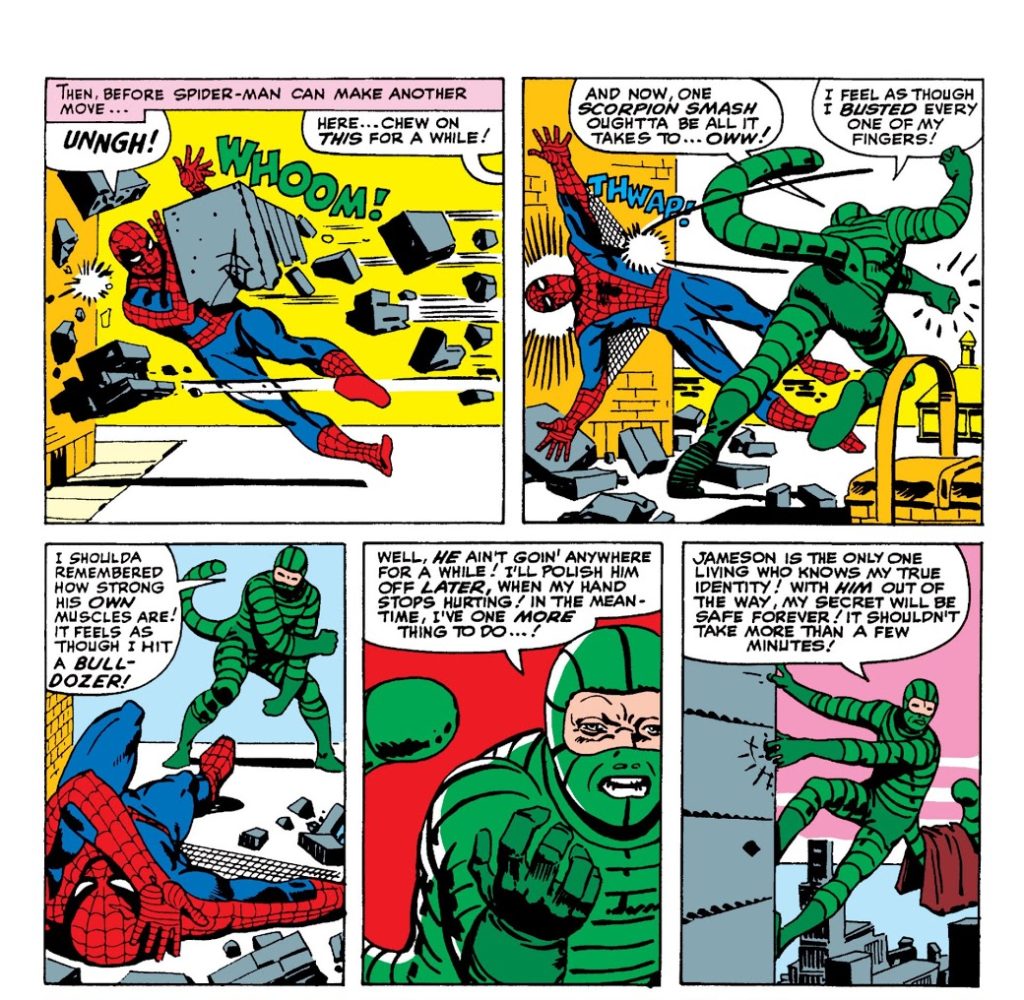 Impressive, is it not? While the wall-crawler manages to finally best Gargan by the story’s conclusion, The Scorpion was nonetheless established as one of the most physically powerful and dangerous opponents our hero had ever faced. So…what happened? After such a strong entrance, Scorpion was quickly reduced to “jobber villain” status, never coming close to the threat he posed in his initial appearance. The only story that I think has come close to matching the menace he emanated is our gem today: The Scorpion Takes a Bride. Not only does this annual remind readers that The Scorpion is stronger than the web-slinger, but it is also one of the best comics to showcase the character’s seething hatred for J. Jonah Jameson.

Our tale begins with a pretty awesome sequence of our webbed wonder bringing down a fleeing criminal helicopter. 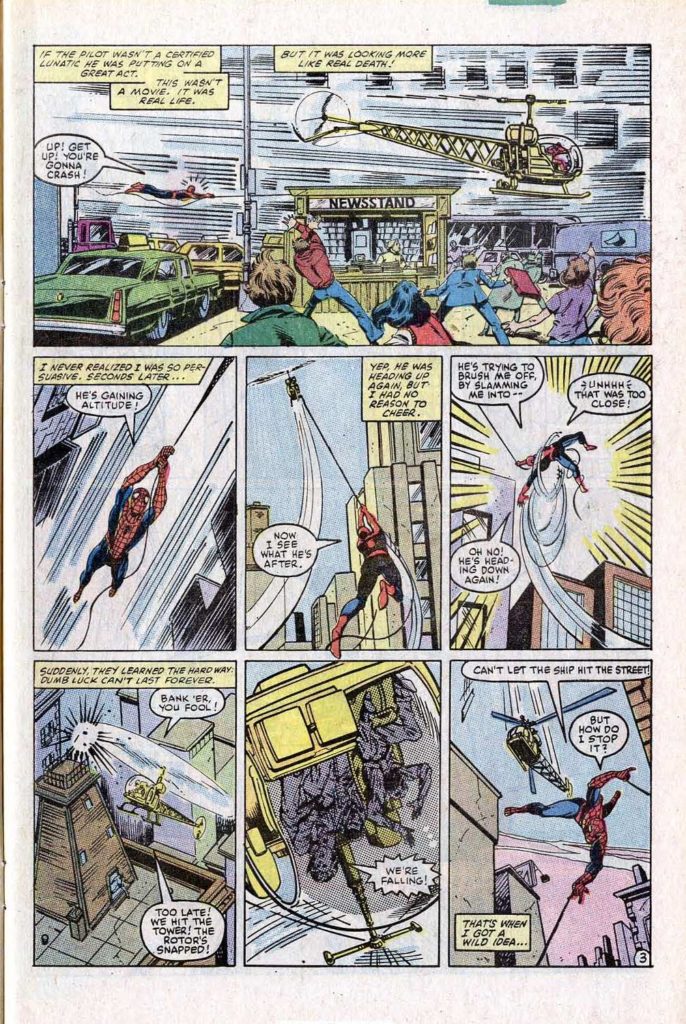 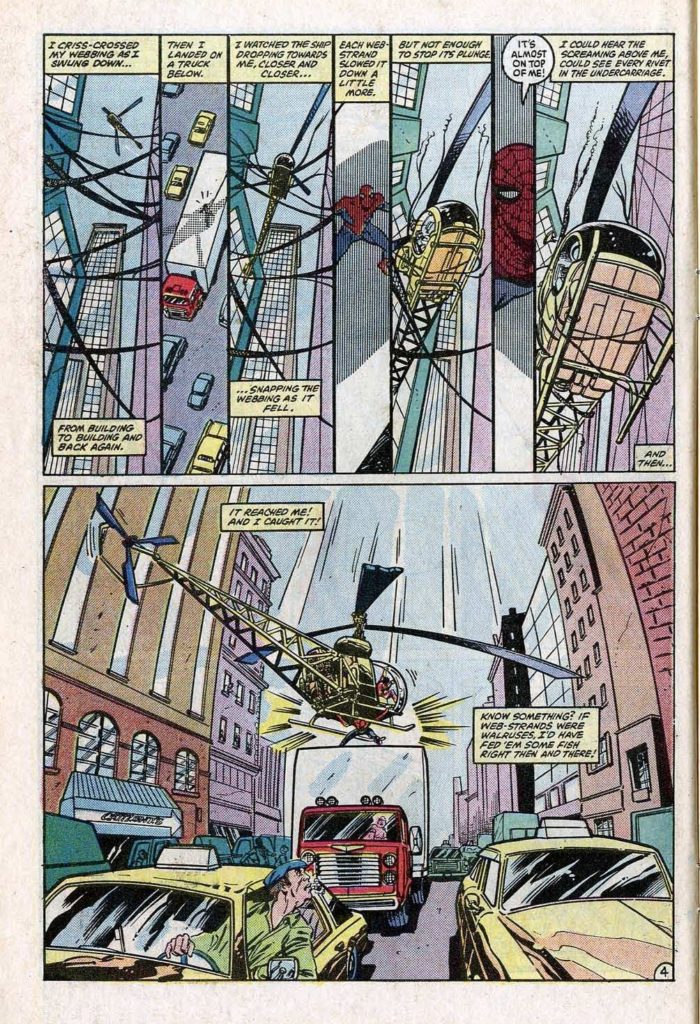 Now that is how you begin a Spider-Man comic. After this little spectacle, our hero returns to his civilian guise and heads to the Daily Bugle to (what else?) sell pictures of the event. But once there, he receives some rather surprising news. 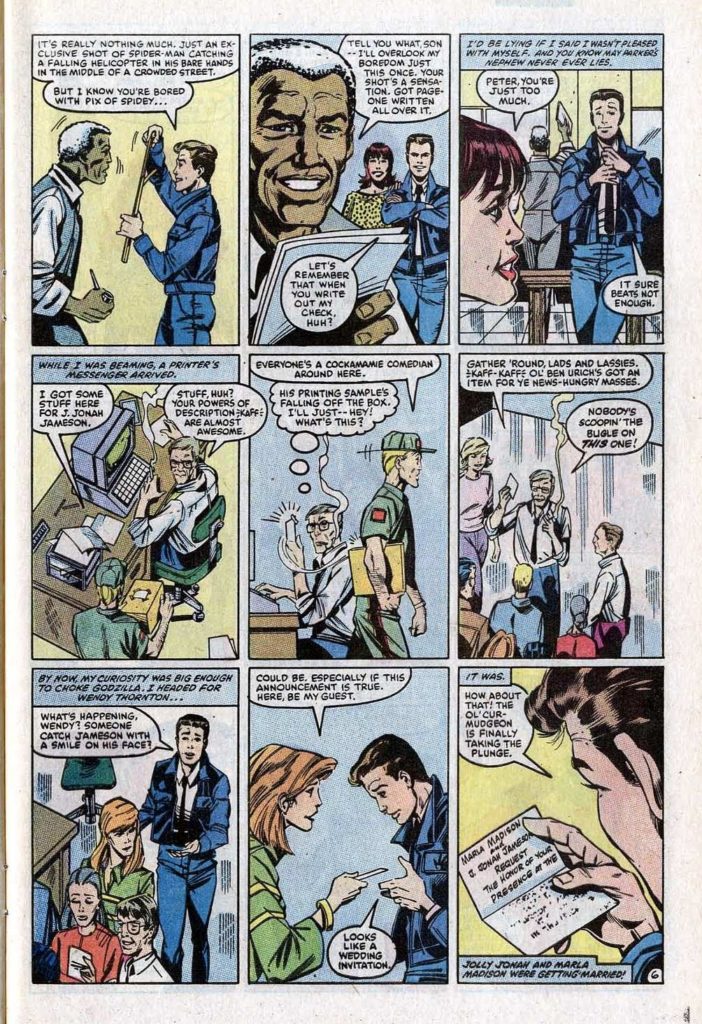 It would appear that Jolly Jonah is finally tying the knot with his longtime lover, Marla Madison. Unable to resist the opportunity, Peter once again adorns his spider-attire so he can personally “congratulate” Jonah. 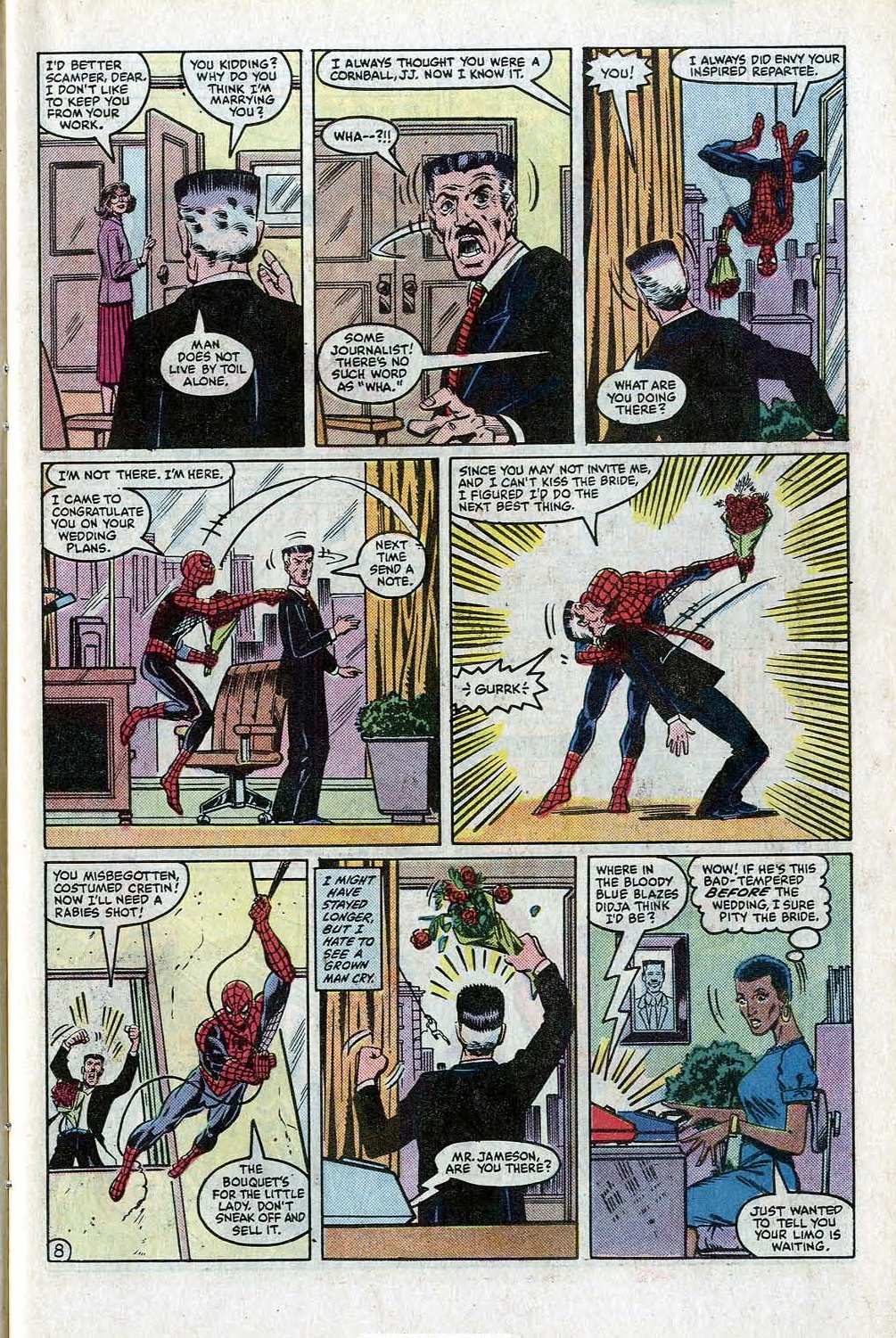 Be honest, you laughed.

After his little spider-smooch, Jonah heads to a suburban sanitarium where his son John is currently being housed (long story) to deliver the big news. But unfortunately, John reacts with everything except happiness to his father’s announcement. 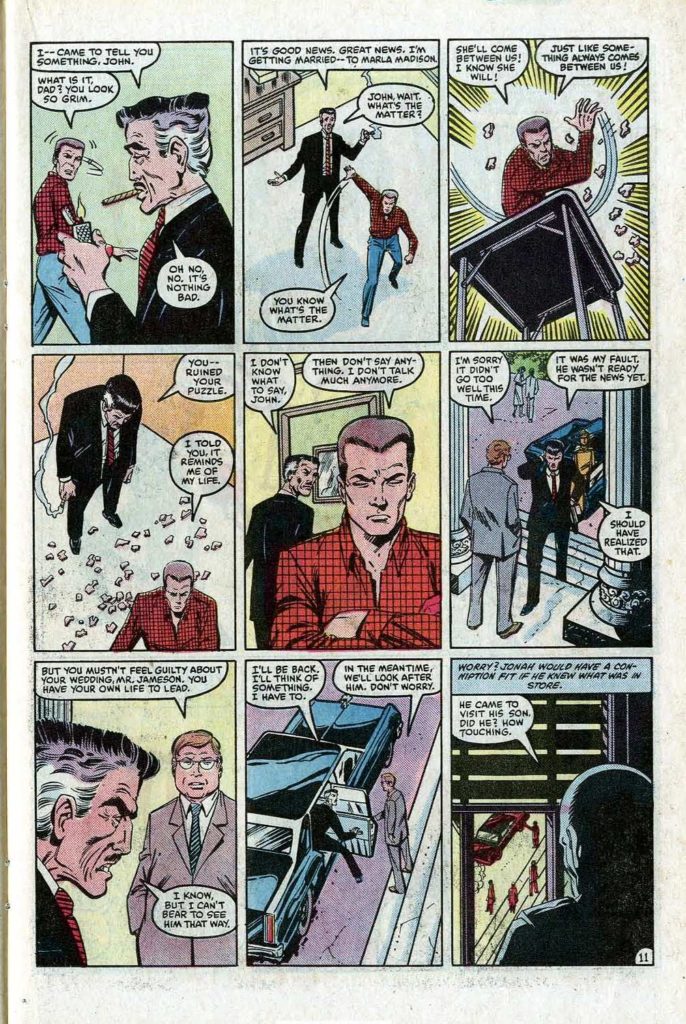 If that little outburst from his offspring wasn’t enough to put a damper on the esteemed publisher’s day, an eavesdropping Mr. Mac Gargan most certainly will. 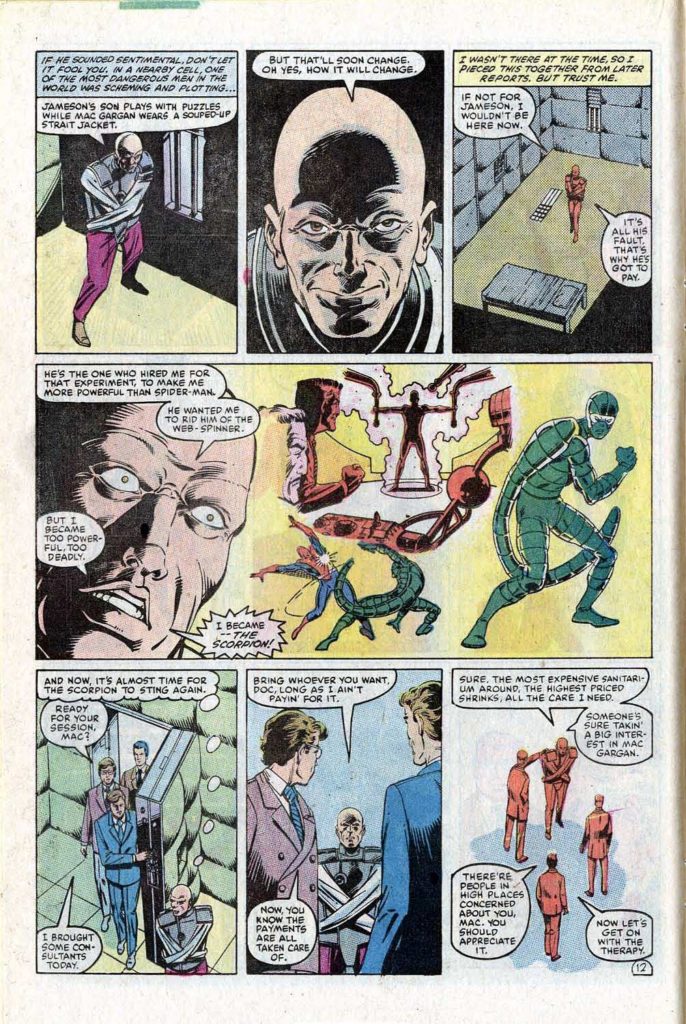 Mac is no more pleased about the news than John was, but for entirely different reasons. He cannot stand the thought of Jameson, the man he holds responsible for turning him into a monster, living happily ever after with his bride while he rots away in a sanitarium.

Awaiting an opportunity to escape, Gargan sits quietly in his padded cell as thoughts of violent vengeance fill his thoughts. And sure enough, that opportunity soon presents itself. 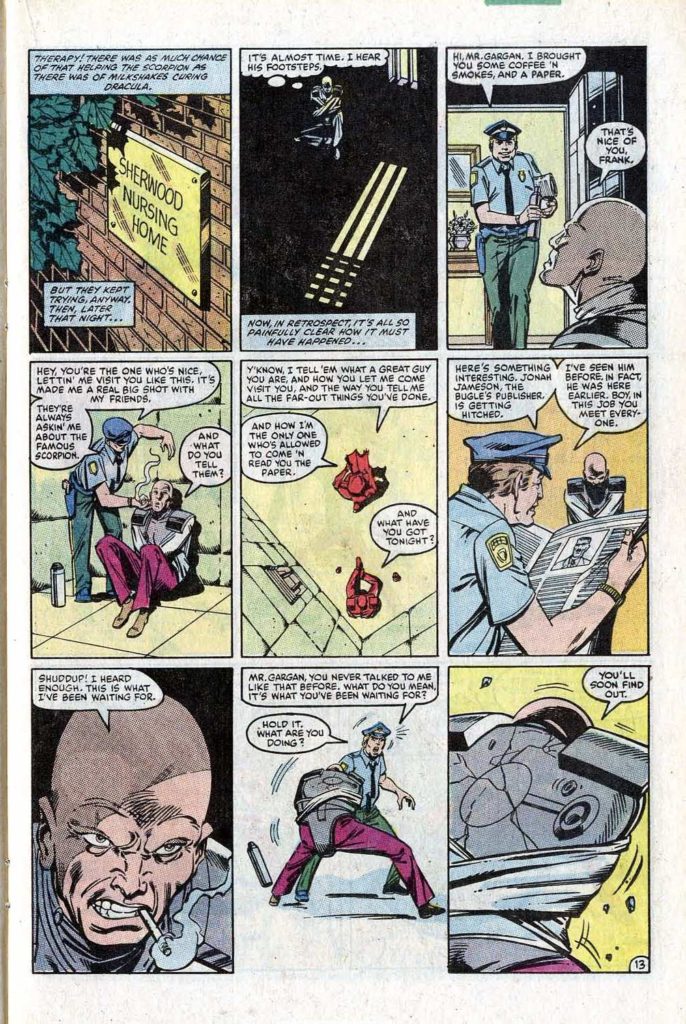 Underestimating the malevolence of his cruel captive, the hapless guard is quickly subdued by an increasingly unhinged Mr. Gargan. 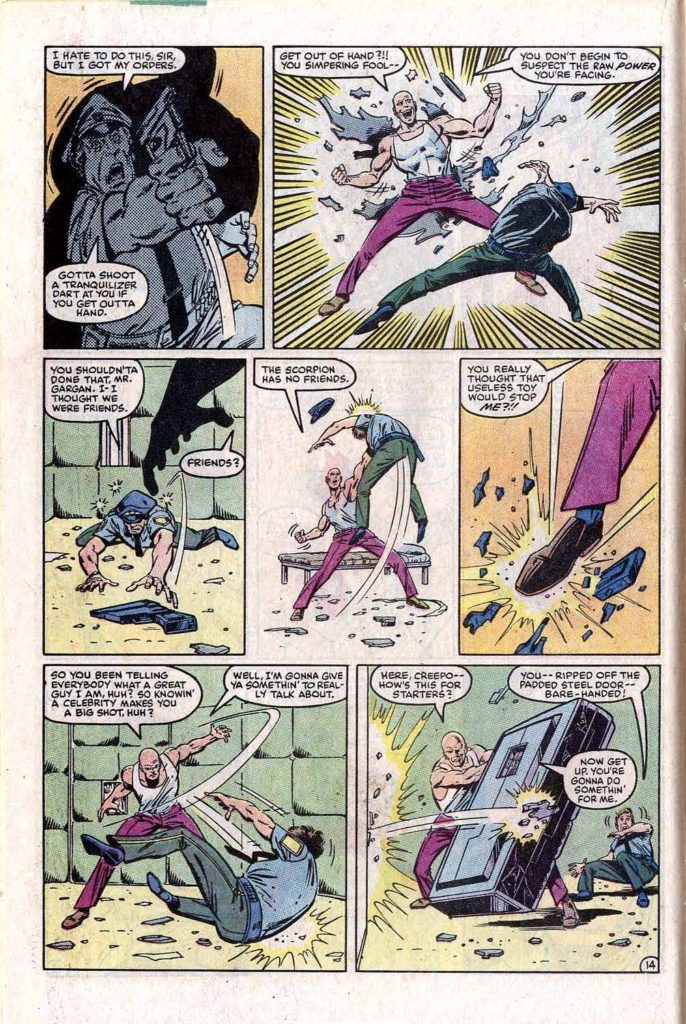 Mac forces the guard to take him to his Scorpion suit, where he makes short work of the vault door it is concealed in. While suiting up, the guard tried in vain to escape his former “friend”, but does not get very far. 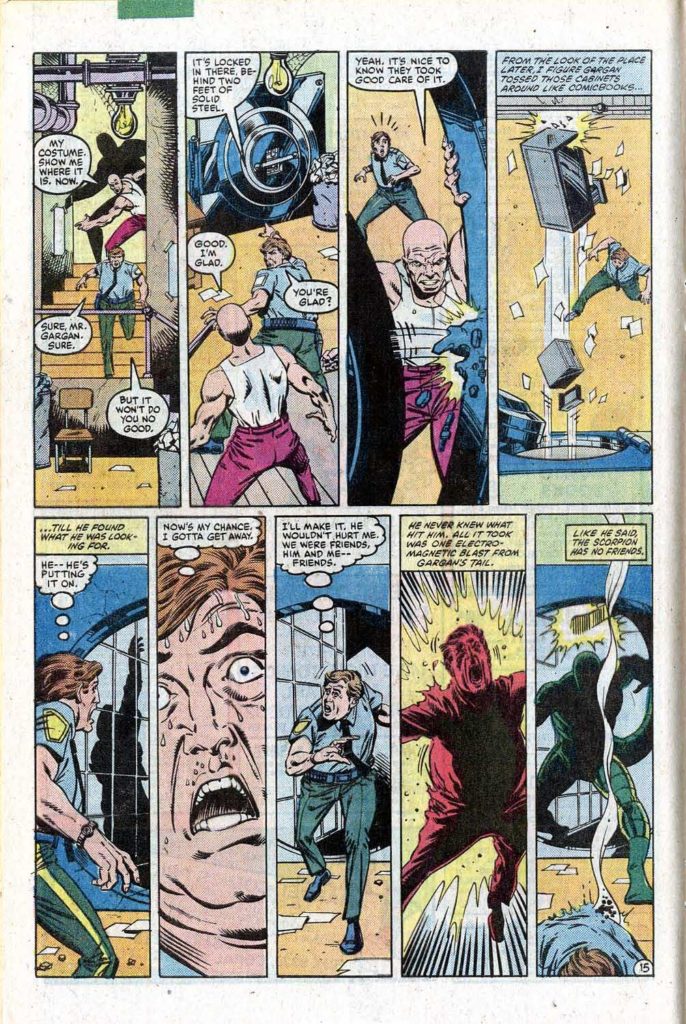 Not wasting any time after disposing of the one man who mistakenly believed there was still some humanity within him, The Scorpion heads directly for John’s room. 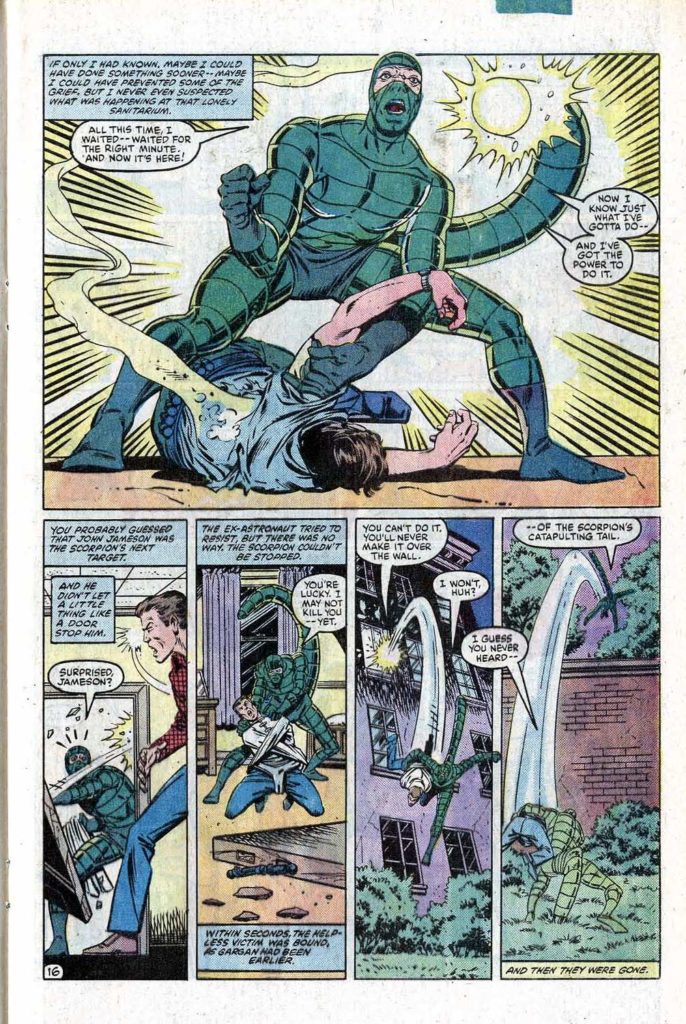 What nefarious plans does The Scorpion have in store for the Jameson family? Is Jonah’s happiest day slated to become his worst day? Am I going to spoil the rest of the story for you? The answers are maybe, perhaps and no. This comic really does cut to the heart of Mac Gargan’s character: a bitter, vicious, pitiless, petty thug who would rather devote his energies to destroying the lives of those he feels have wronged him instead of accepting help and improving himself. Gargan really is contemptible here and it makes for a great antagonist that you cannot wait to see get taken down. While I’m all for a sympathetic villain, sometimes it can be equally effective to have an irredeemable scumbag instead. Aside from The Scorpion’s characterization, this is yet another strong outing for everyone’s favorite flat-top. This is easily one of the most human portrayals of J. Jonah Jameson that readers have ever gotten, as he never once blames Spider-Man for his predicament in this story. Instead, Jonah is fully aware that the predicament he finds himself in is of his own doing, as he desperately does everything within his limited power to keep the two people he loves most in this world safe.

You can track down the individual issue, or pick up these two trades: Aside from being a great centerpiece of the Scorpion/Jameson rivalry, this comic also has historical significance as it features the wedding between J. Jonah Jameson and Marla Madison. So what’s your excuse for not having read this yet? Go!