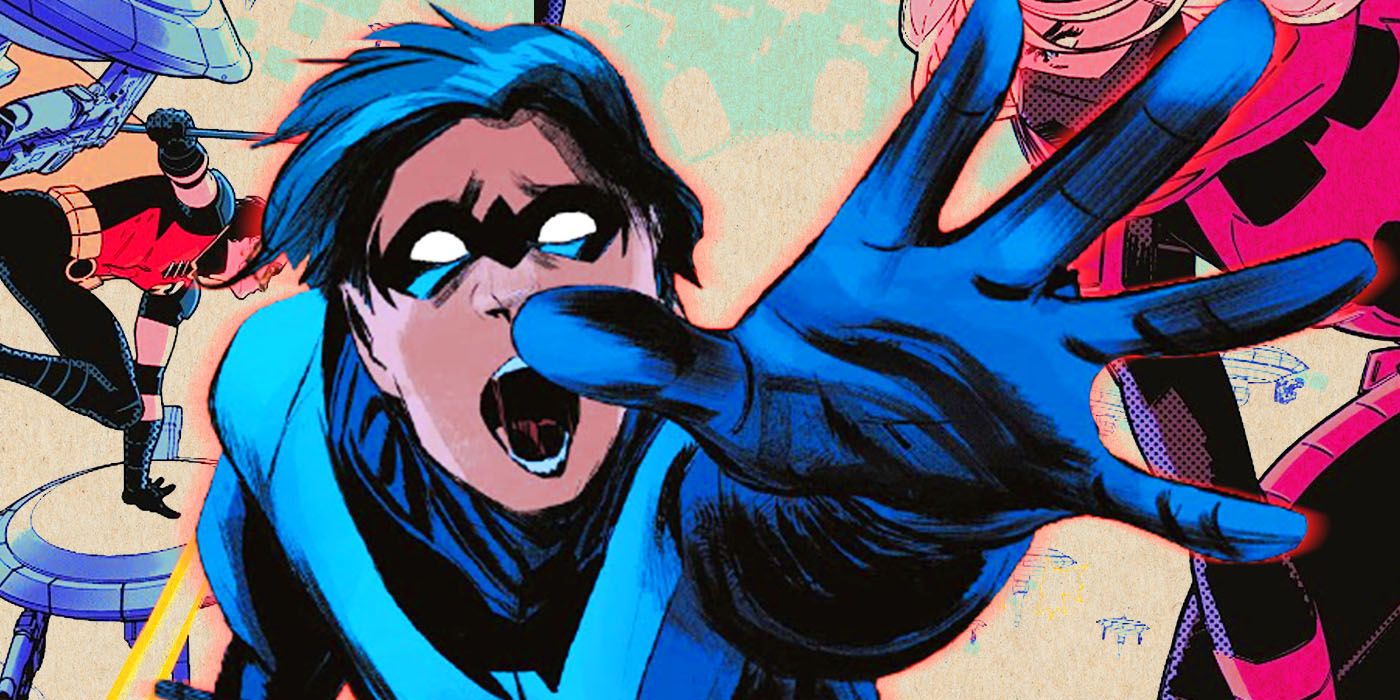 Most members of the Bat-Family share some kind of trauma. Dick Grayson seemed to kickstart the trend of Robins being orphaned when he first came into Batman’s life. In Nightwing #86 (by Tom Taylor, Robbi Rodgriguez, Adriano Lucas, Wes Abbott), it is revealed that even after so many years, the trauma from the night he lost his parents could still be triggered by circumstances.

When the Magistrate seemingly destroyed Oracle’s clocktower with Stephanie Brown and Cassandra Cain still in it, Dick felt as if he was reliving that moment of helplessness, unable to do anything but watch his loved ones die. Of course, Stephanie and Cassandra survived, but the moment reveals just how deeply Dick still feels the loss of that night and how that fear of being helpless still lingers within him.

RELATED: Batman’s Family Just Got Powerful New Upgrades – but Are They Ethical? 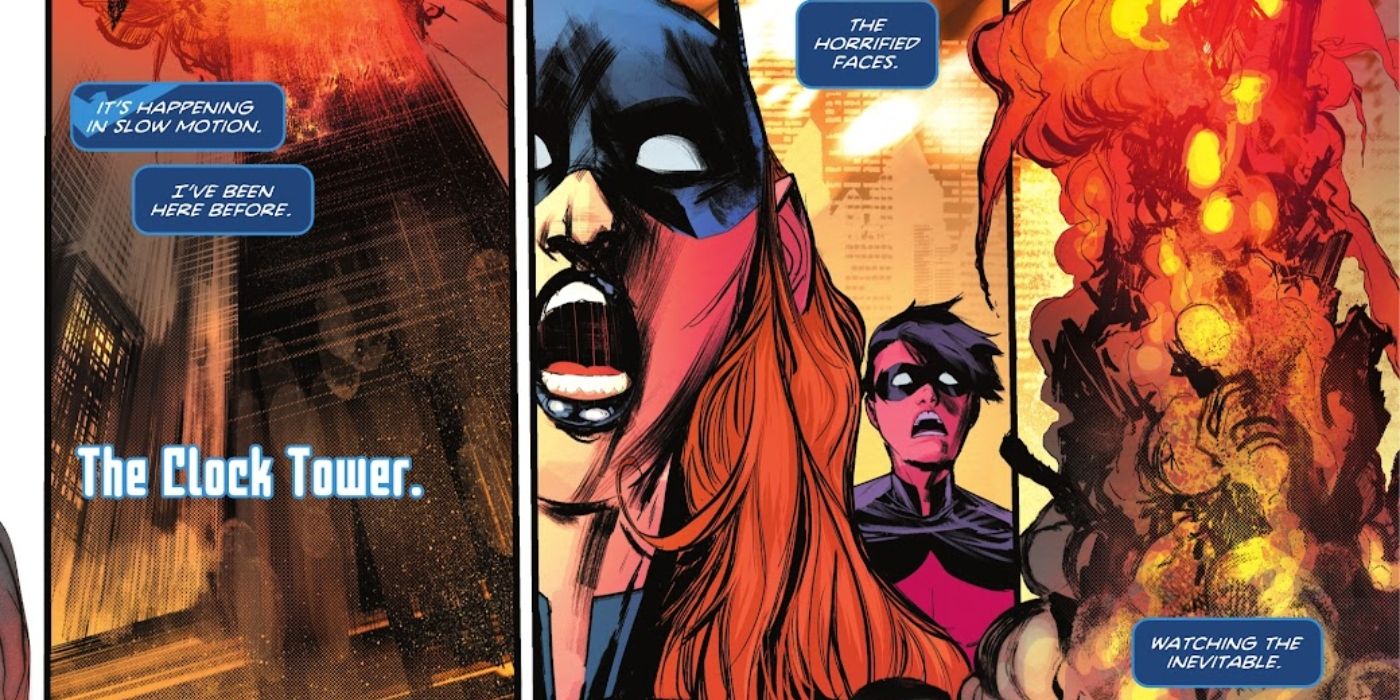 As most Nightwing fans know, Dick was part of Haly’s Circus growing up. He and his parents were the star attractions, the Flying Graysons, a family of professional acrobats. Unfortunately, when the circus arrived in Gotham City, they were approached by Tony Zucco, who tried to get them to join his protection racket. When the circus refused, Tony sabotaged the Flying Graysons’ trapeze, causing their lines to snap and sending both Dick’s mother and father plummeting to their deaths. All Dick could do was watch the look on his parents’ faces as they fell.

That complete sense of powerlessness has lingered with him to this very day. Dick has done everything in his power since then to be the kind of man who can catch those who are falling. Watching the clocktower explode and seemingly killing two young women who are essentially his sisters, Dick felt like he was a child again, unable to do anything to help save the people he loves most. 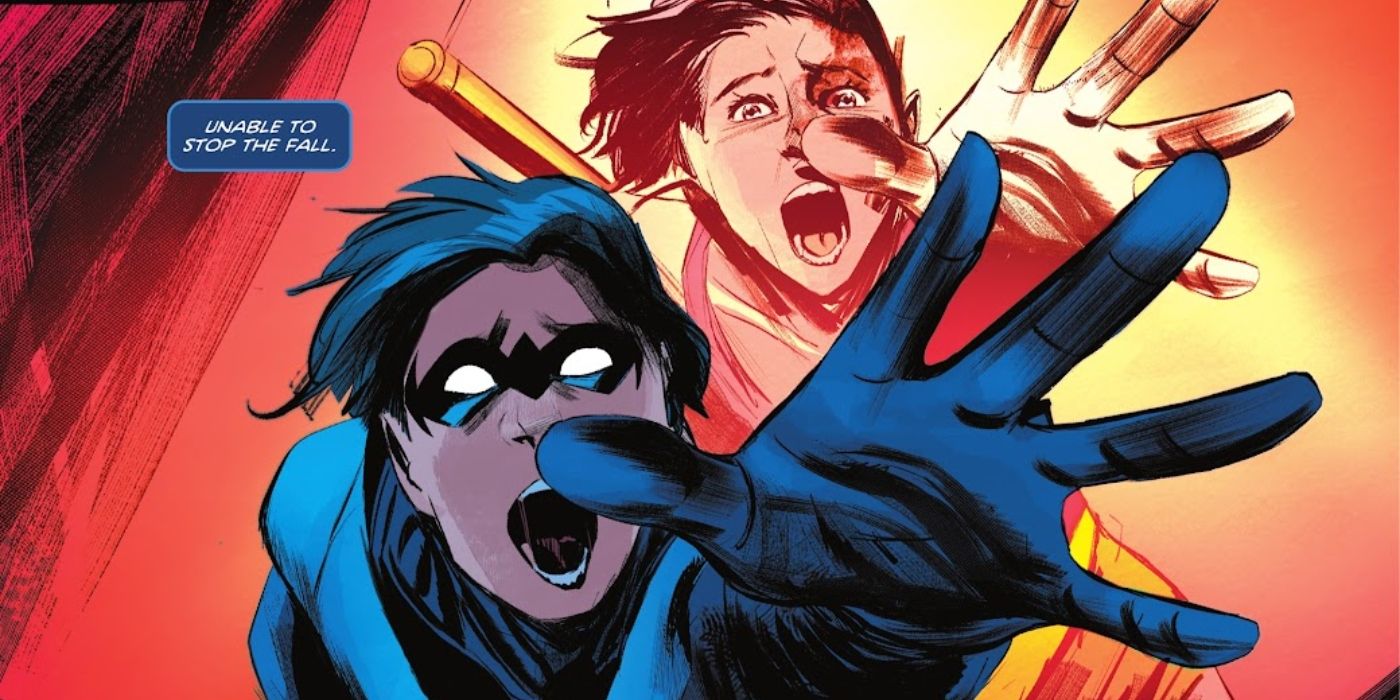 While certainly inconvenient for the hero, it’s an appropriate time for this fear to resurface during Fear State. The fear of helplessness could be even more of a motivator for Dick than anything else in his life. Not wanting to go through that feeling ever again, he honed himself into one of the finest acrobats on the planet. He does not need the trapeze his parents had, he can fly through the air on his own now, thanks to Batman’s gadgets. This reemerging fear might make him vulnerable, though. The Fear State is still in effect, with Gotham turning on itself as its heroes scramble to undo the damage that has been unleashed by Scarecrow and Simon Saint.

It’s possible that Nightwing’s fears might even be exploited against him. Scarecrow kept well ahead of the Bat-Family throughout the event. The only way he could accomplish this is by keeping tabs on them, and with his plans in full motion, he would have to keep watch over them even more obsessively. If he takes notice of Nightwing’s fear, an obvious “weakness” to exploit, he could divide the Bat-Family even further, perhaps throwing its various members into danger to force the others to respond, taking away precious time needed to save a city on the brink of total collapse.