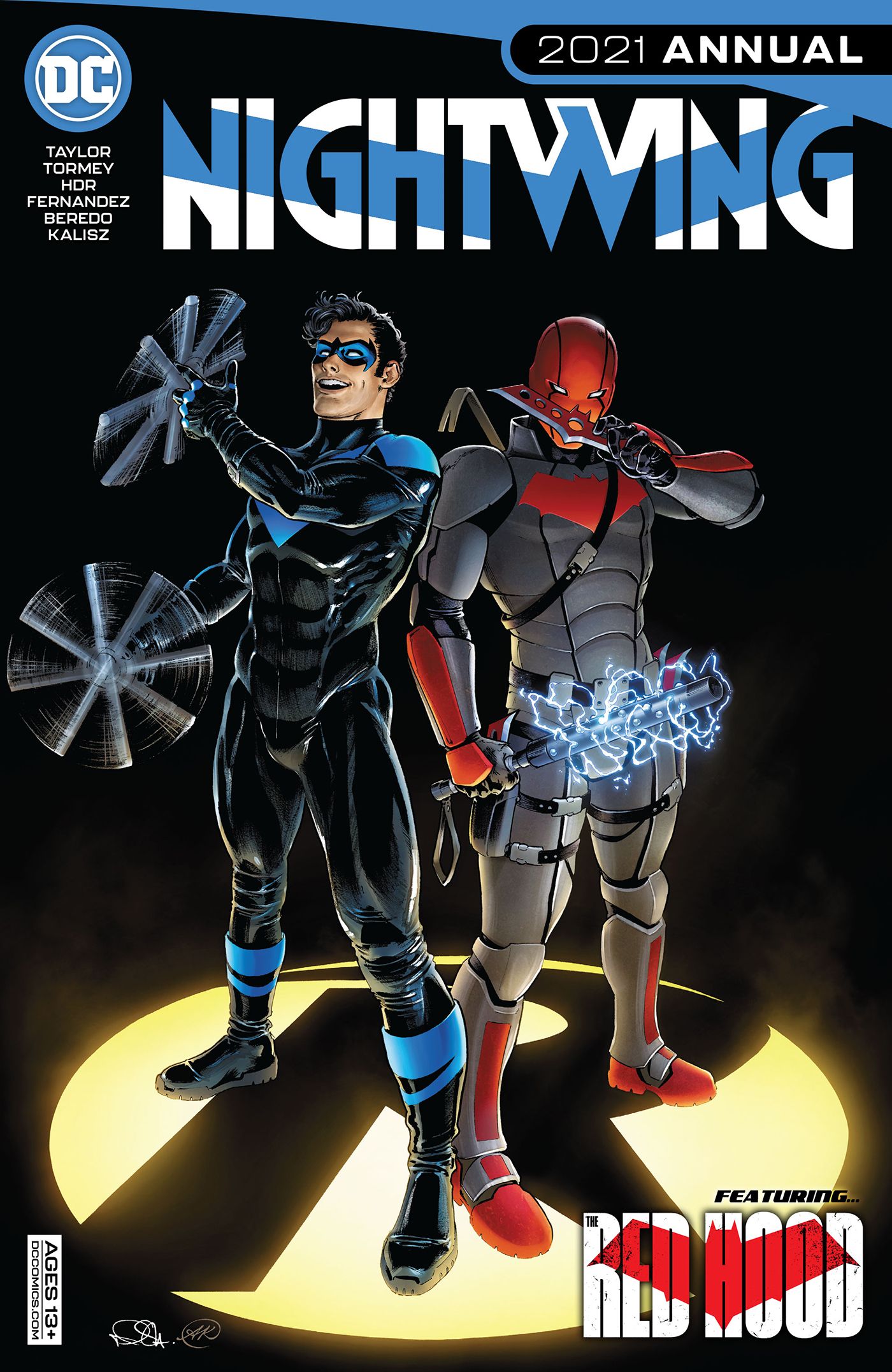 Since taking over as the writer for Nightwing in 2021, writer Tom Taylor delivered a vision of the former Robin that is very much his own man. In Nightwing Annual #1, Grayson teams up with the wayward Robin, Jason Todd. In doing so, Taylor illustrates what makes Nightwing unique among the Batman family. Drawn by Cian Tormey and Daniel HDR with inks by Tormey, HDR, and Raul Fernandez, and colors by John Kalisz and Rain Baredo, Nightwing Annual #1 is a fun adventure that further develops the relationship between Nightwing and Red Hood.

Nightwing Annual #1 begins with Dick Grayson watching a recording of seemingly Red Hood killing several criminals. Dick is skeptical, so he tracks down the Red Hood. They team up to clear Jason’s name and find the real culprit. Their quest is interspersed with a flashback to their first meeting. Throughout the issue, the two come to a new understanding of each other. 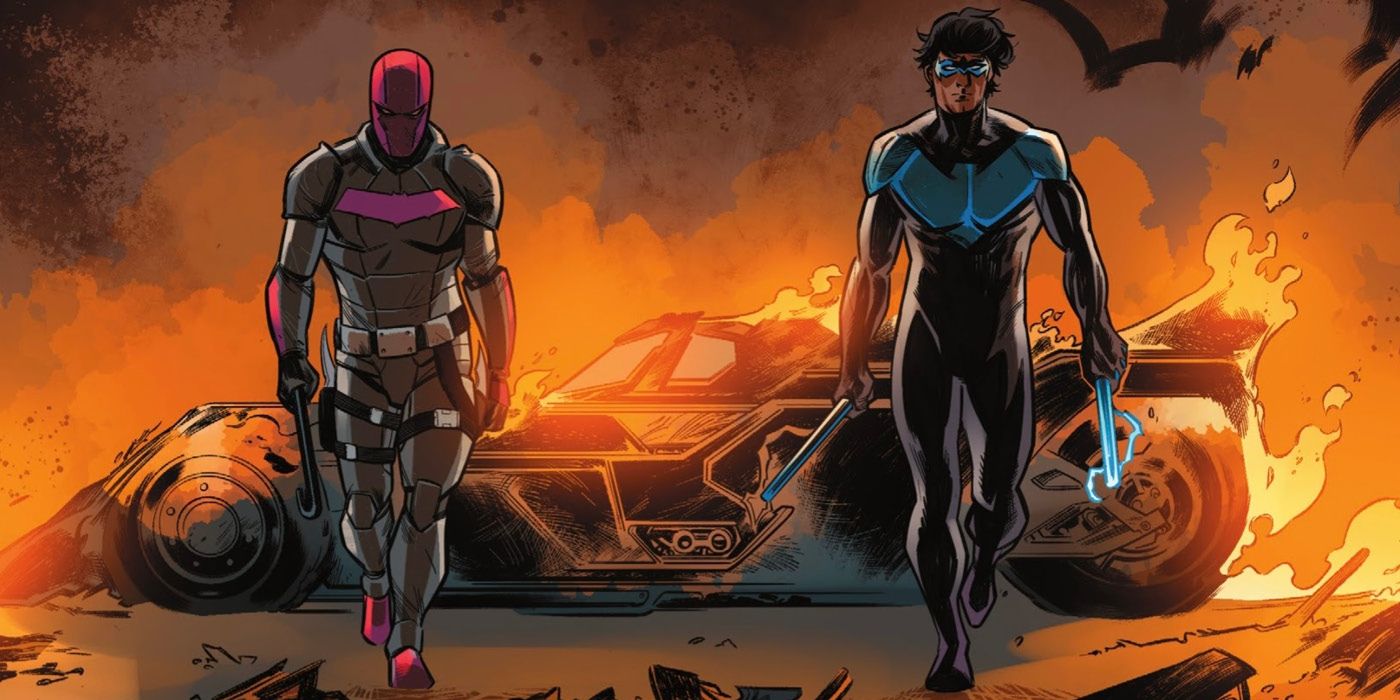 Considering Tom Taylor’s time writing Dick Grayson, Nightwing Annual feels less polished. Its mystery plot is mostly an excuse to bring Jason Todd and Dick Grayson together. Even though Batman is absent from the issue, his presence looms large. In this sense, it is a bit of a step backward for Taylor’s Nightwing. His Grayson is all about taking a more proactive role in defining himself. However, where the issue succeeds is Taylor’s avoidance of the tired tropes of conflict that precede a team-up. Nightwing confronts Red Hood, but there is no big scuffle. Grayson believes Red Hood is innocent; although it takes Jason by surprise, it’s a strong statement for Dick Grayson as a character and the ways he differs from Batman. He trusts that the Red Hood meant it when he said he put away guns for good.

By dipping into their past, Taylor juxtaposes the early days of Jason Todd’s descent into violent vigilantism with his current struggle to overcome that anger, represented by his ditching his firearms. Red Hood made his reputation — the Gotham vigilante willing to kill. Bringing him into Nightwing’s world allows Taylor to show the influence Nightwing has had on Jason’s capacity for heroism. It is effective storytelling, and it helps further Taylor’s mission to position Nightwing as a role model for the superhero community. The lackluster mystery of who is impersonating Red Hood is secondary to the characters.

The art team does a decent job, depicting clear action and a clever panel layout. Nightwing Annual’s strongest section is the flashback with Nightwing and Robin on patrol. On one vertigo-inducing page, they perch on a gargoyle that also acts as a panel border for the top quarter of the page. The visuals are inconsistent, though, with characters not always appearing the same between pages — even in sections drawn by the same penciler. Compared to Bruno Redondo’s spectacular work in the main title, this Annual feels bland. The colors by Rain Beredo and John Kalisz offer a measure of consistency between the artists with vibrant hues that make the issue pop and feel like a distinctly Nightwing perspective of Gotham City. 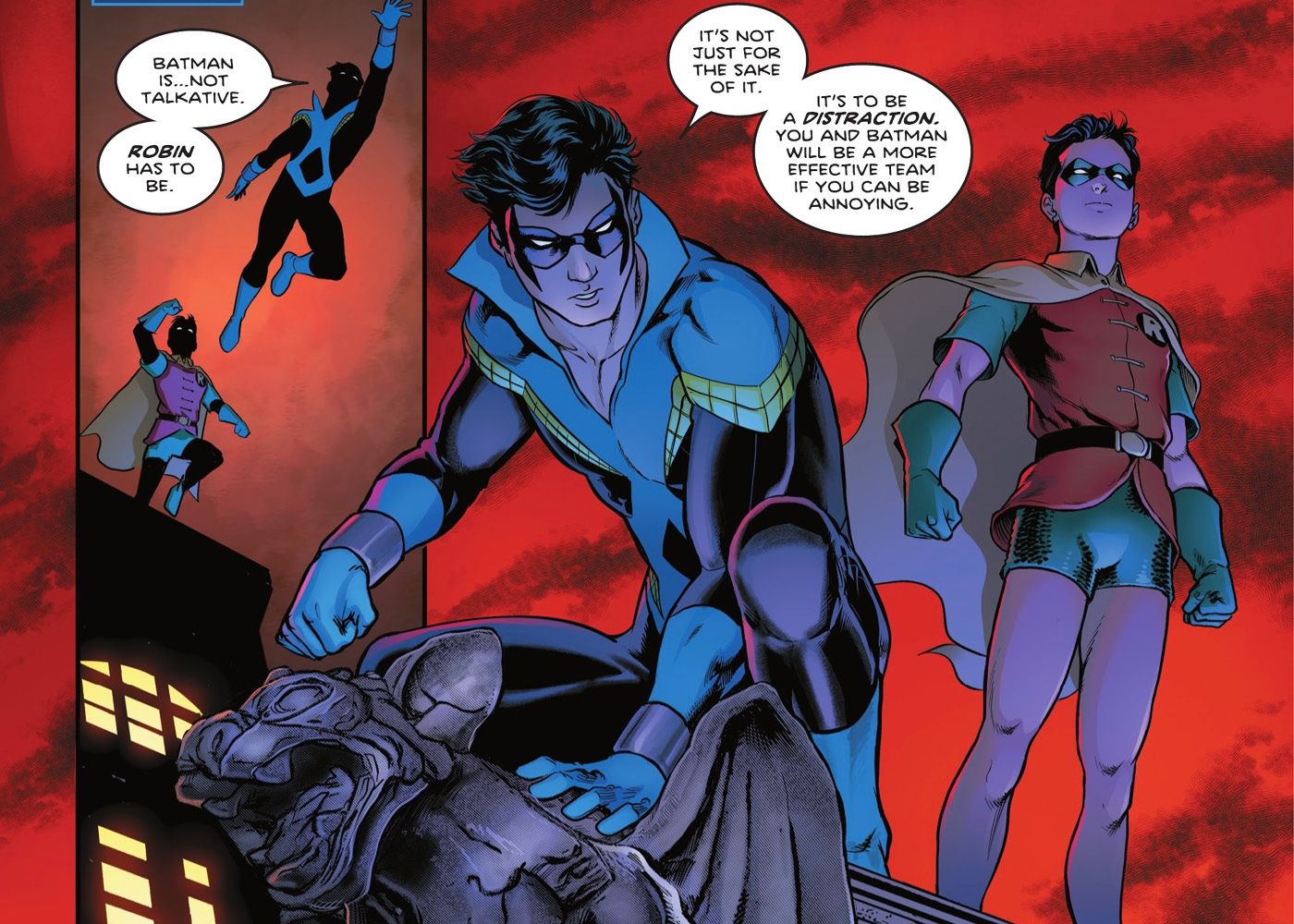 Nightwing Annual #1 makes for an entertaining issue, especially for those invested in the interpersonal relationships of the extended Batman family. It all feels a bit familiar, with an unremarkable art team and a well-trodded plot. For those following Taylor’s Nightwing run, this isn’t a must-read. However, it still offers a bit of a respite from the recent “Fear State” crossover and helps solidify Taylor’s vision for the character as a pillar of the DCU.

What Netflix’s Cowboy Bebop Needs to Fix for Season 2