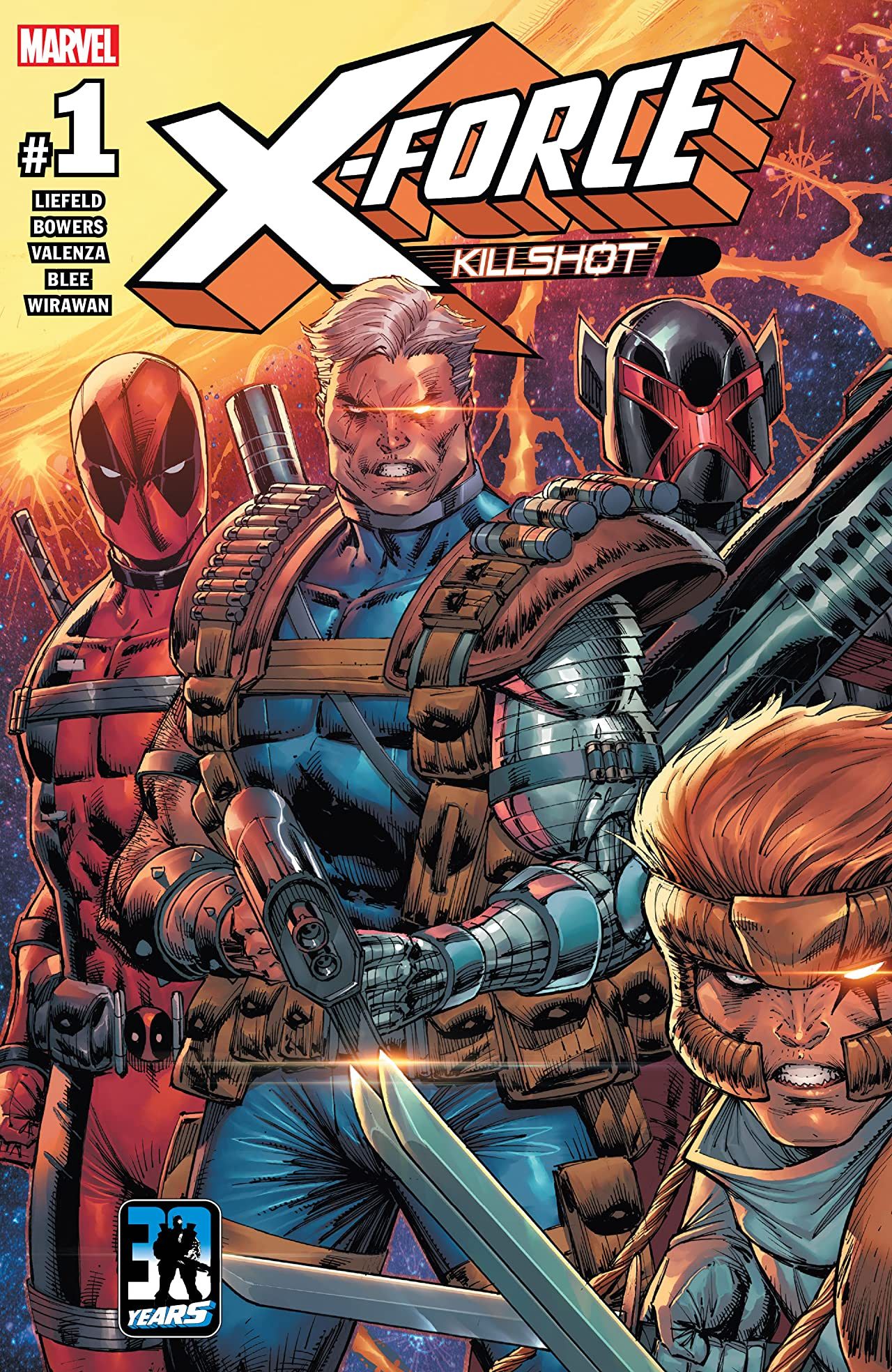 Rob Liefeld returns to the franchise he created in the pages of X-Force: Killshot Anniversary Special #1. Alongside writer Chad Bowers, Liefeld turns the clock back to 1991 with a throwback adventure that takes Cable, Deadpool and time-traveling versions of other fan-favorites on a mission to fight Stryfe. The issue captures many of the qualities that turned the ’90s’ X-Men titles into a cultural phenomenon, while progressing plot threads developed in the 30 years since X-Force first launched. It is an action-packed comic with lots of gritted teeth and pouches, just as Liefeld likes it.

X-Force: Killshot Anniversary Special #1 opens with the recently resurrected Cable rallying the troops on board the Graymalkin II. As Cable slowly details his plan to storm Asteroid S and fight against Stryfe, the book shows a host of X-Force members from across time and space, including variants on Domino, Deadpool, Shatterstar, Warpath, the Thing, Major X and even Cable himself. The giant-sized X-Force battles everything in their path, but when a variant of longtime foe Zero arrives from outside of time, will X-Force be able to confirm their kill?

X-Force: Killshot Anniversary Special #1 finds Liefeld and Bowers joining forces once again, following their collaboration on the 2017 Youngblood series, and it is clear from the first page that they intend for this to feel like a story ripped out of yesteryear. Liefeld’s streamlined plot allows for Bowers to step in and play with the book’s immense cast, offering up fun snippets of dialogue that keep things feeling breezy. Since this is an action-heavy spectacle, the decision to bounce around between voices instead of sticking with a guiding narrator allows the issue to fit in an astonishing amount of characters, giving everybody a moment to shine. Sure, it’s Cable and Deadpool’s show, but nobody feels genuinely neglected.

Additionally, X-Force: Killshot Anniversary Special #1 sees Liefeld provide art on an X-Force title for the first time in over 15 years. He offers up new incarnations of his original creations, like a Deadpool 2-inspired Domino and a color-swapped Major X. These inclusions make for a unique opening, which sees Liefeld slowly introduce many of these familiar-yet-foreign faces in methodical shots. However, once the story hits Asteroid S, Liefeld produces non-stop action, with all the explosions and guns that fans expect. In a lot of ways, it’s Liefeld at his most Liefeldiest, as Cable, Cable and Cable Jr. take on Cable’s clone. What’s not to love?

With that in mind, it is interesting to look at the unique position that X-Force: Killshot Anniversary Special #1 finds itself in amongst the current mutant landscape. As the X-Men head towards significant changes in larger events, the self-contained nature of this one-shot makes it a welcome read for fans that want something big, simple and silly. The time-traveling narrative allows Liefeld and Bowers to reach back and grab their favorite versions of X-Force, while also introducing some new faces. It’s easy to jump in and feel satisfied. Since this book will likely wind up in the hands of lapsed fans who enjoyed the 90s, this one-shot is a great invitation back into the franchise.

Overall, X-Force: Killshot Anniversary Special #1 is an appropriate tribute to the team’s excessive origins. The issue captures the essence of Liefeld’s original X-Force run and the addition of talents like Bowers, Bryan Valenza, Federico Blee and Mirza Wirawan help tailor the adventure for modern audiences. While it is unlikely that this issue will change the opinions of anybody who doesn’t like the era of X that this harkens back to, it is a perfect treat for everybody who loves it, pouches and all.

https://ift.tt/7beW3w9 ✖ At long last, Stranger Things is finally making its return to Netflix after nearly three years away. The