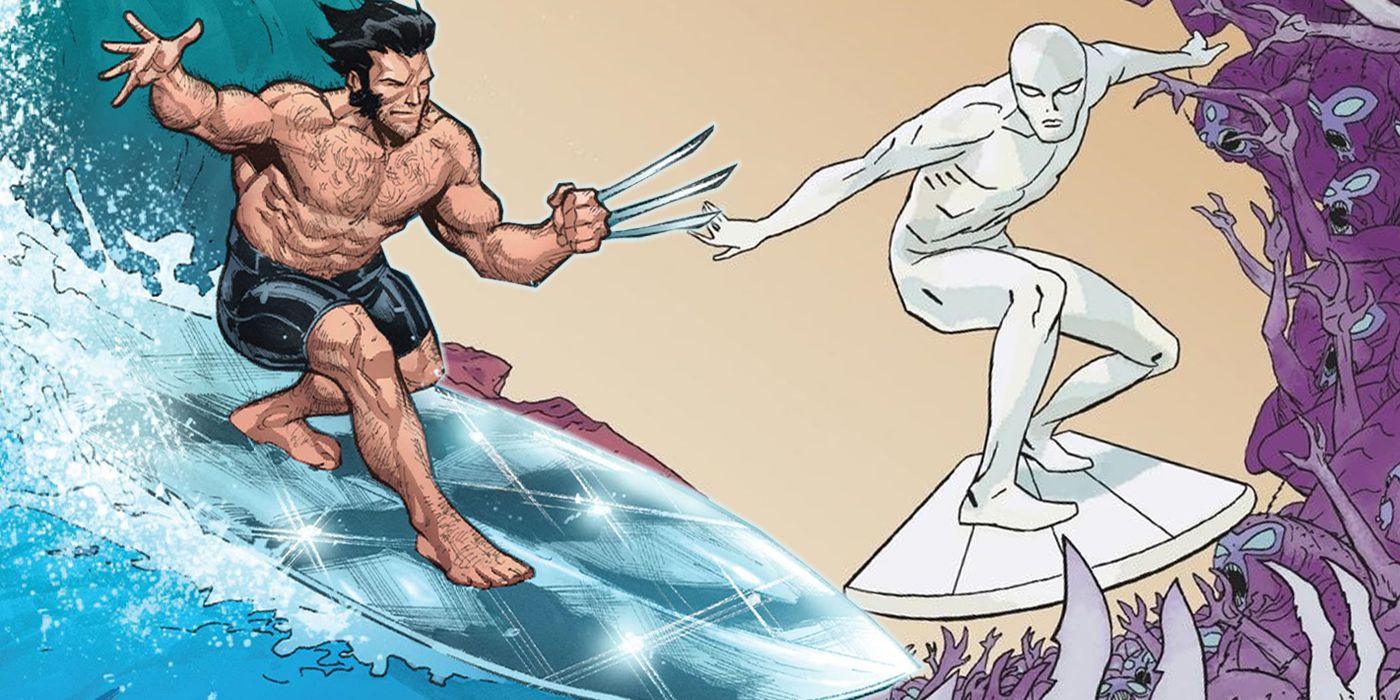 Wolverine (aka the mutant Logan) has held many titles over the course of his extraordinarily long life. He has been a soldier, a weapon, a statue and a member of the X-Men, but his newest piece of equipment has transformed him into Krakoa’s version of Marvel’s Silver Surfer.

X-Force #25 (by Benjamin Percy, Robert Gill, and Guru eFX) opens with Forge fulfilling a favor to Wolverine by creating for him an adamantium coated surfboard made from Krakoan balsa wood. Afterwards, Logan took his newly minted board to one of Krakoa’s beaches to ride the waves off the coast of the mutant utopia. Interestingly, this isn’t the first time that Forge has used adamantium coating to help Wolverine, as he keeps a “punch bowl of Adamantium” in his shop to coat Logan’s skeleton and claws whenever he is resurrected. Right after he first saw the bowl, Wolverine said that it gave him an idea and asked Forge if he could make him something. 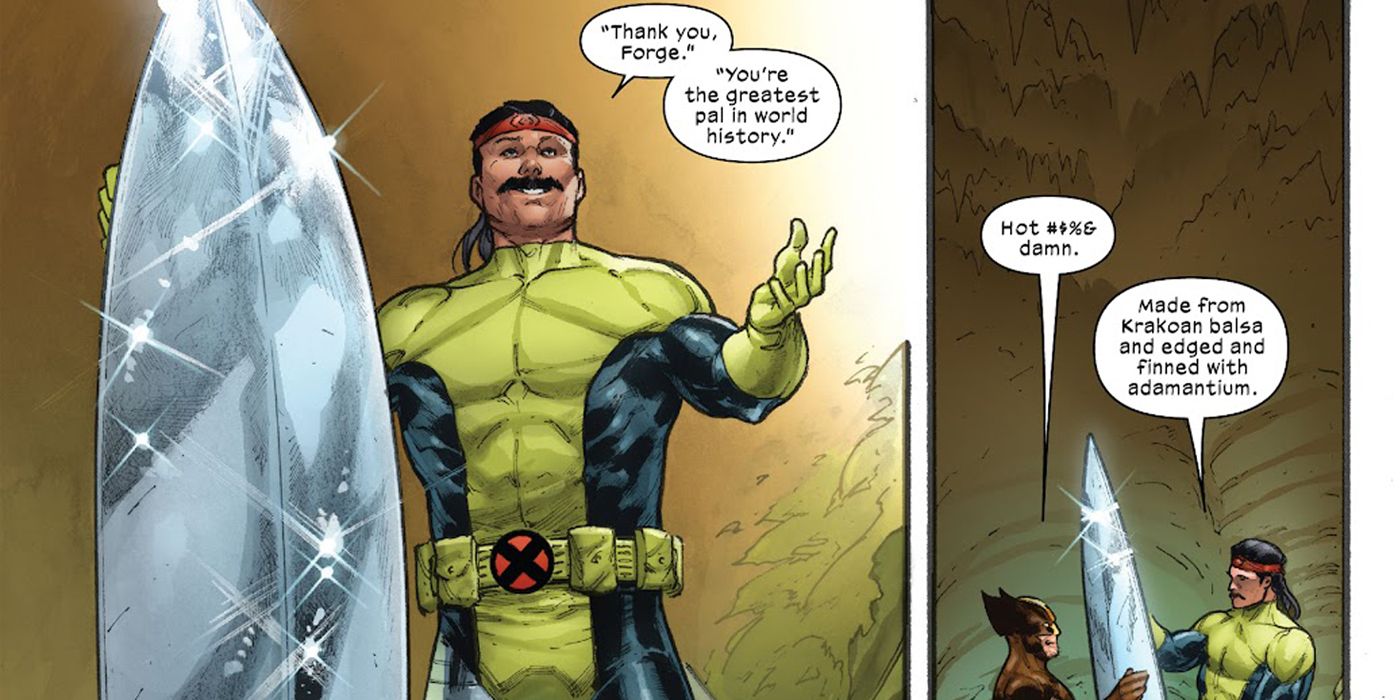 Forge has always been the X-Men’s go-to technology guy but his newest role as Krakoa’s weapons expert has him creating some of the most innovative technologies the world has ever seen. His technopath mutant abilities give him a genius level intellect that has allowed him to create thousands of incredible inventions, but Wolverine’s new adamantium surfboard might take the cake for his most ridiculous creation yet.

While the adamantium surfboard is certainly a cool new addition to Wolverine’s arsenal of cutting edge weaponry, it is a dangerous waste of Krakoa’s resources and Forge’s time. Time and time again, the X-Men have tried to enter the global market using their incredible technology, but they’ve always failed in some way or another. One of the most recent examples is Multiple Man’s energy machine that ended up malfunctioning and killed one of Multiple Man’s clones in the process, publicly embarrassing the X-Corp in front of their investors and industry personnel. While the X-Men have all earned well-deserved beach vacations, Krakoa’s deepest secret is on the cusp of being revealed to the rest of the world so they have little time to be wasting energy and resources on a bizarre one-off weapon/vehicle. 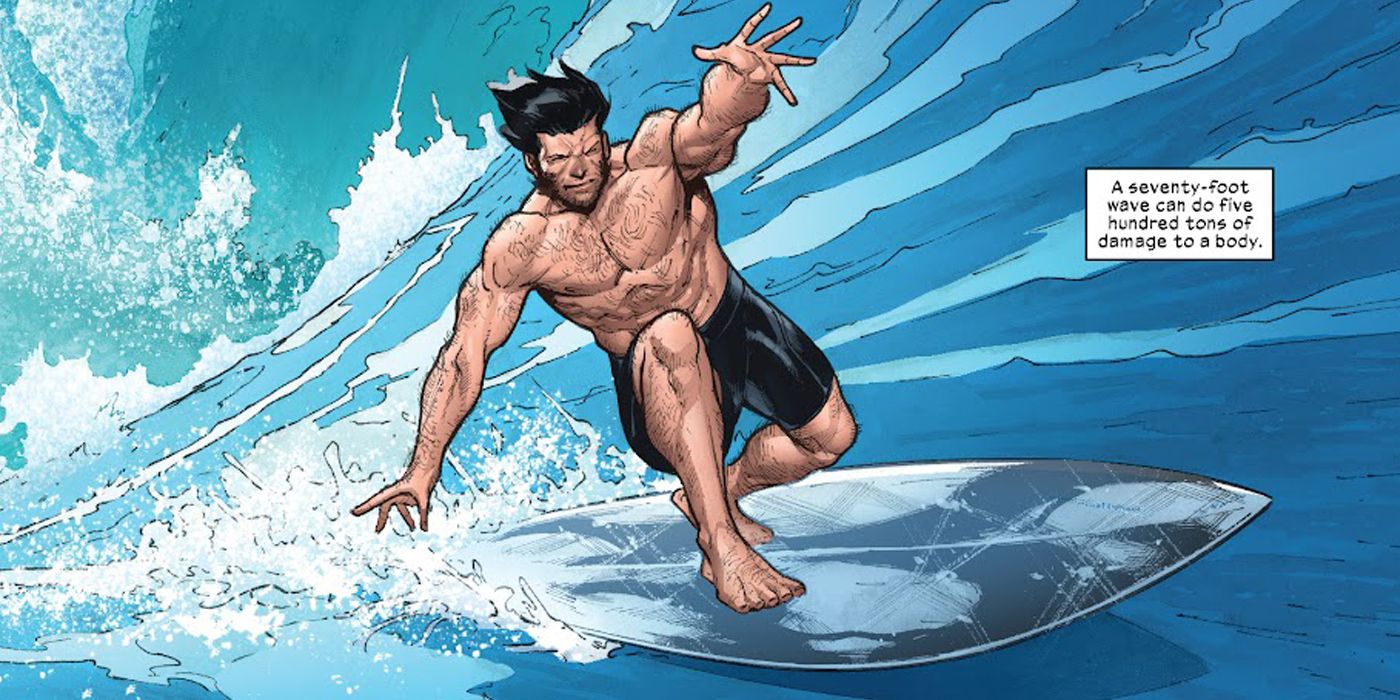 Nevertheless, it is still refreshing to see Wolverine enjoying himself while being free of the haunting nightmares and realities that he lives with constantly.

While testing out his new board, Logan met a couple of surfers who were later revealed to have infiltrated the island to steal some of the babies from the Bowery. Hopefully, Wolverine takes his new adamantium-coated surfboard on a mission to stop the thieves’ baby heist before its too late to thwart whatever their plans are for the next generation of mutants.

YOD WAVE by YOUR OLD DROOG