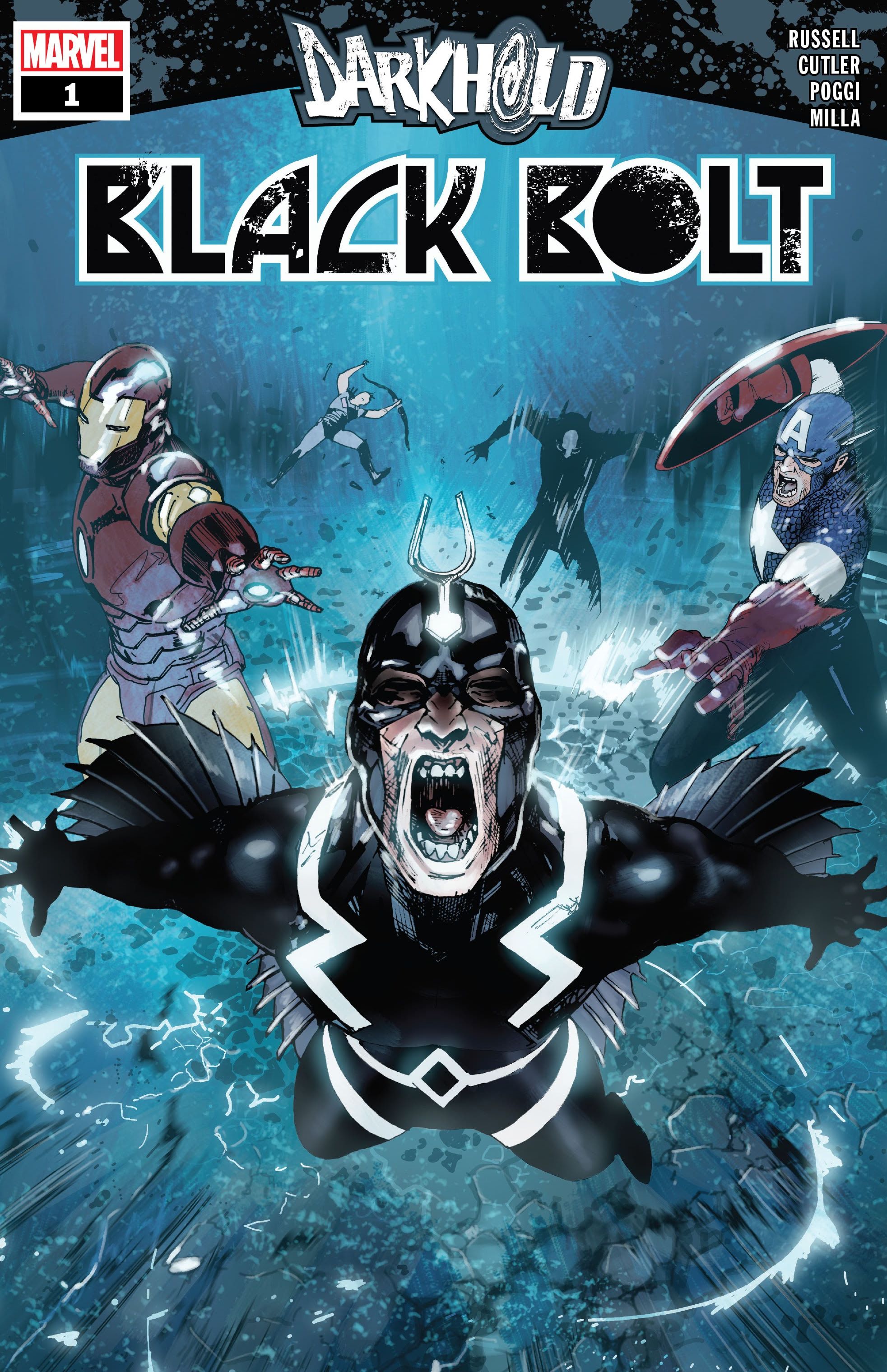 When Doctor Doom used his Doom-bots to read the secrets of the Darkhold, he sent some of Marvel’s greatest heroes hurtling towards disaster. As the Darkhold continues to show heroes their most terrifying iterations of themselves, Iron Man, Spider-Man, The Wasp, and their compatriots struggle to make sense of the situation. Now Mark Russell, David Cutler, and Roberto Poggi are subjecting the inhuman Black Bolt to the psychological horror of one of Marvel’s powerful magical artifacts in Darkhold: Black Bolt #1, an entertaining sci-fi mystery.

Darkhold: Black Bolt #1 begins with the hero stranded on Terros, a moon his Kingdom used to exile criminals. As he traverses the lunar environment, he fends off predatory creatures like the Desert Kraken and searches for food. Soon he discovers he’s unable to fly, so he climbs to high ground for supplies. Piece by piece, Black Bolt recalls his brother Maximus’s nefarious plans to overthrow the Kingdom and take power for himself. Right when Black Bolt thinks he knows what’s going on, new revelations recontextualize everything.

Related: The MCU’s Next Villain Just Turned an Avenger into a Superhero Killer 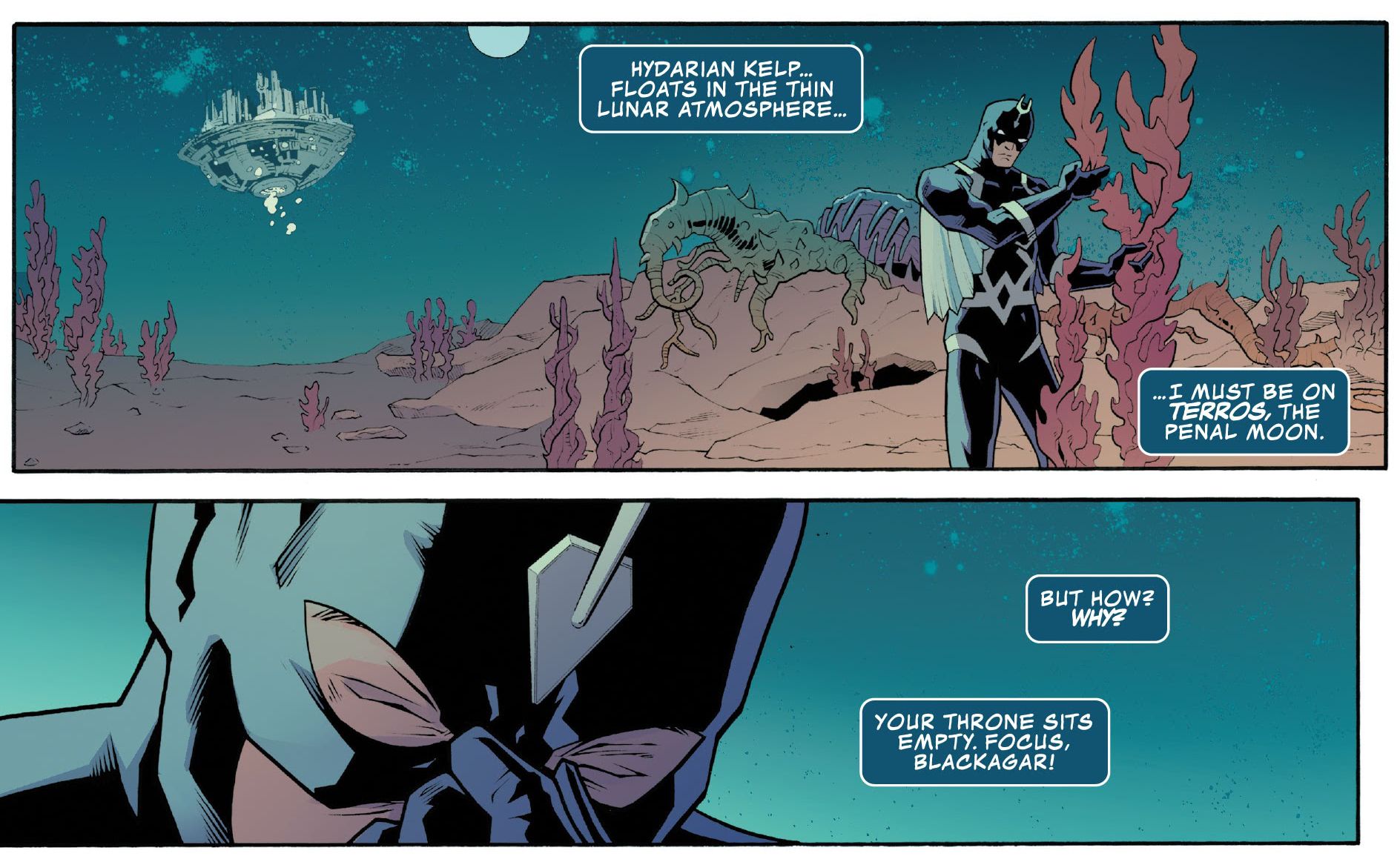 At first glance, a comic about a silent hero stranded alone on an alien moon doesn’t seem like the sort of story that would give a writer much opportunity to demonstrate their skills. Mark Russell uses the quiet, barren landscape to his advantage. He builds the story around Black Bolt’s interior monologue. By filtering the narrative through the hero’s fractured memory of events, Russell keeps the audience guessing about the story’s true reality. He takes advantage of this uncertainty with a surprise ending that will leave readers scratching their heads for a while.

Penciller David Cutler and inker Roberto Poggi work together to craft a beautiful and mysterious landscape on Terros. Black Bolt runs into various creatures, all of whom are reminiscent of golden-age sci-fi stories. It is easy to imagine Ray Harryhausen animating a giant Desert Kraken, but in spite of the almost campy designs, these creatures seem at home on the brutal moon. There is something inherently surreal about the image of a costumed Black Bolt wandering a deserted moon, and both artists revel in the odd imagery. There is a particularly brilliant sequence when Black Bolt climbs a mountain in the middle of the desert that best captures the dreamlike nature of Darkhold: Black Bolt #1. Colorist Matt Milla compliments the artists’ old-school sci-fi aesthetics perfectly. His muted colors make it difficult to determine the time of day, which adds to the story’s dreamy and mysterious atmosphere. 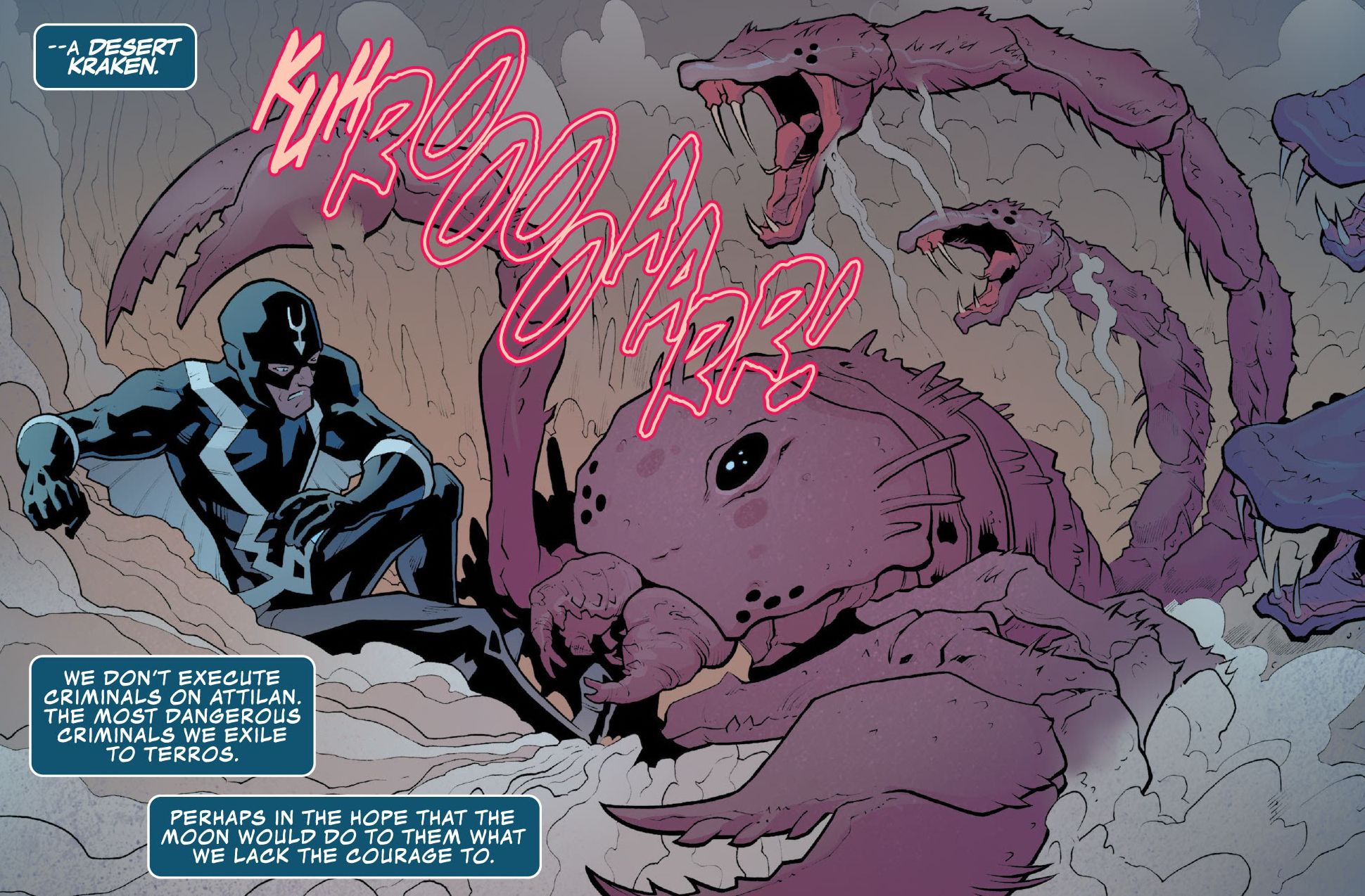 Darkhold: Black Bolt #1 stands out among the Darkhold books as the most visually and structurally distinct. Its ending calls all of the audience’s assumptions about Black Bolt’s role in the series into question, leaving fans anxious for the next installment of Darkhold. Mark Russell’s writing is entertaining and nuanced enough to reward multiple readings, but Cutler and Poggi’s art steals the show in this issue as they present the hero in a landscape that feels at once classic and brand new.