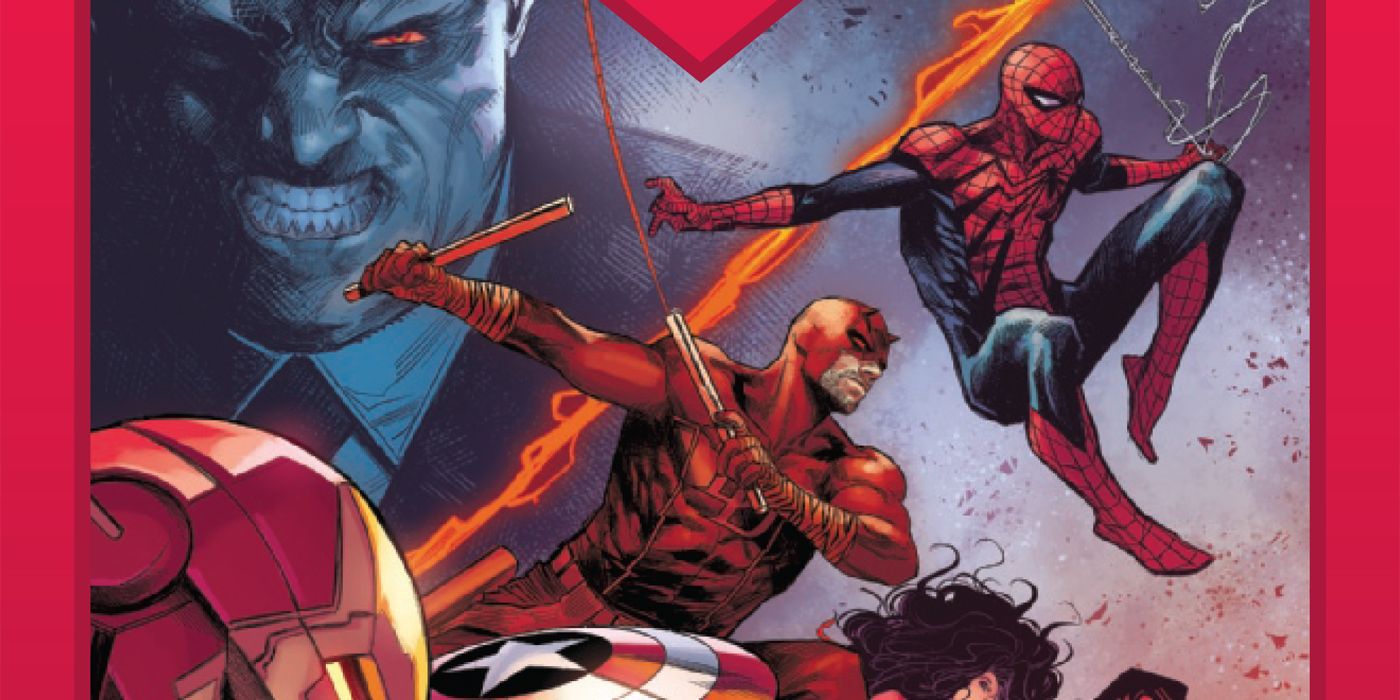 WARNING: The following contains spoilers for Daredevil #36, on sale now from Marvel Comics.

A new preview for the upcoming Marvel event Devil’s Reign shows an infuriated Kingpin who’s had it with Daredevil — along with all the other superheroes of New York City.

Devil’s Reign #1 from Chip Zdarsky, Marco Checchetto, Marcio Menyz and Clayton Cowles features Wilson Fisk ruminating on the many reasons he’s hated the Man Without Fear. Chief among these is what Fisk perceives as Daredevil’s “hypocrisy” — the tendency of Matt to put on “airs of a saint tasked with succumbing to violence” when he really isn’t as holy as he appears. As Fisk thinks on Daredevil’s tendencies, he confronts his nemesis in the streets of Hell’s Kitchen, accusing him of tampering with files that contained Matt’s secret identity. After Daredevil taunts Fisk, the Kingpin decides to use his power as mayor of New York City to targeted all masked individuals, effectively outlawing them throughout the metropolis. 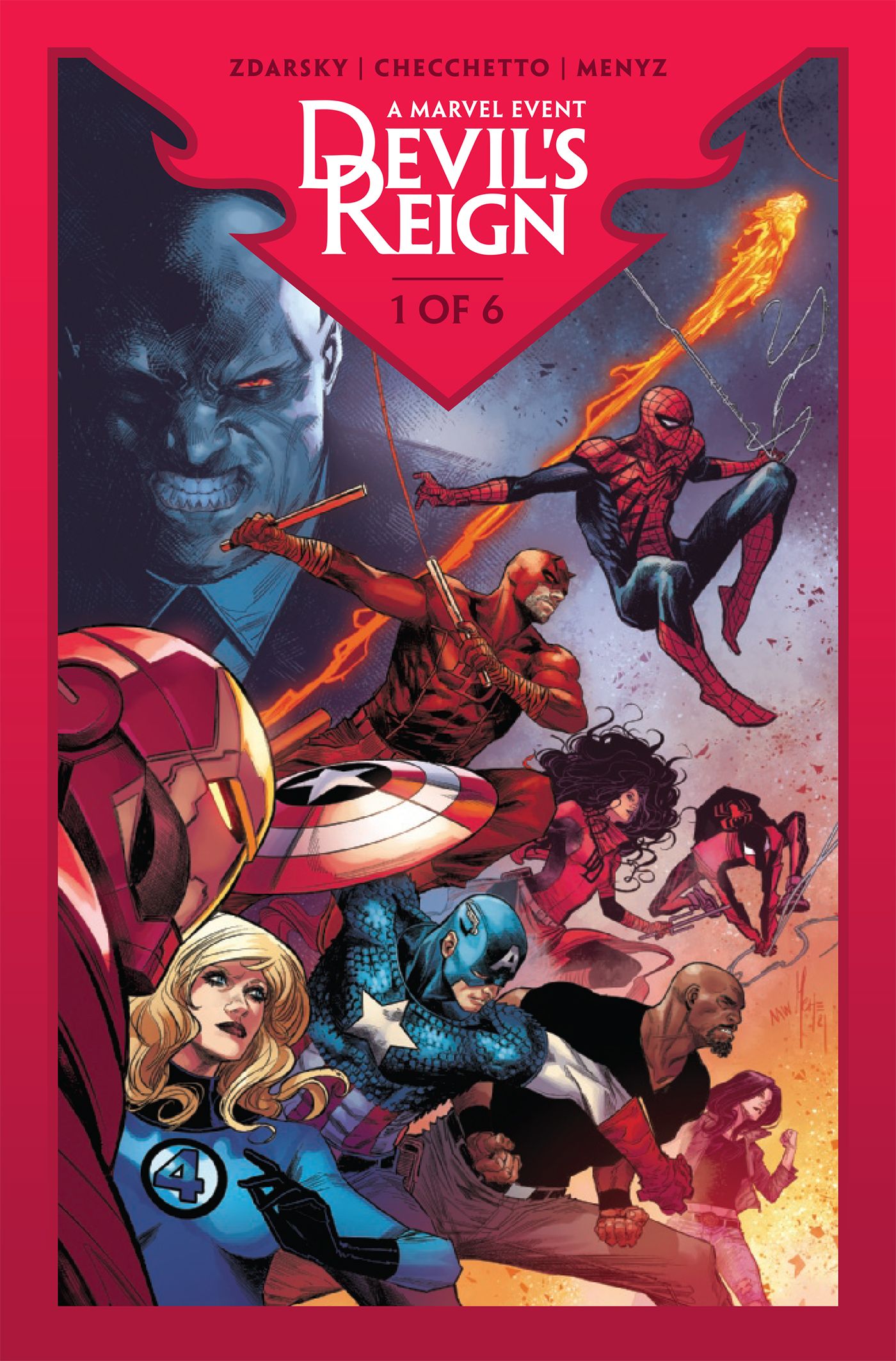 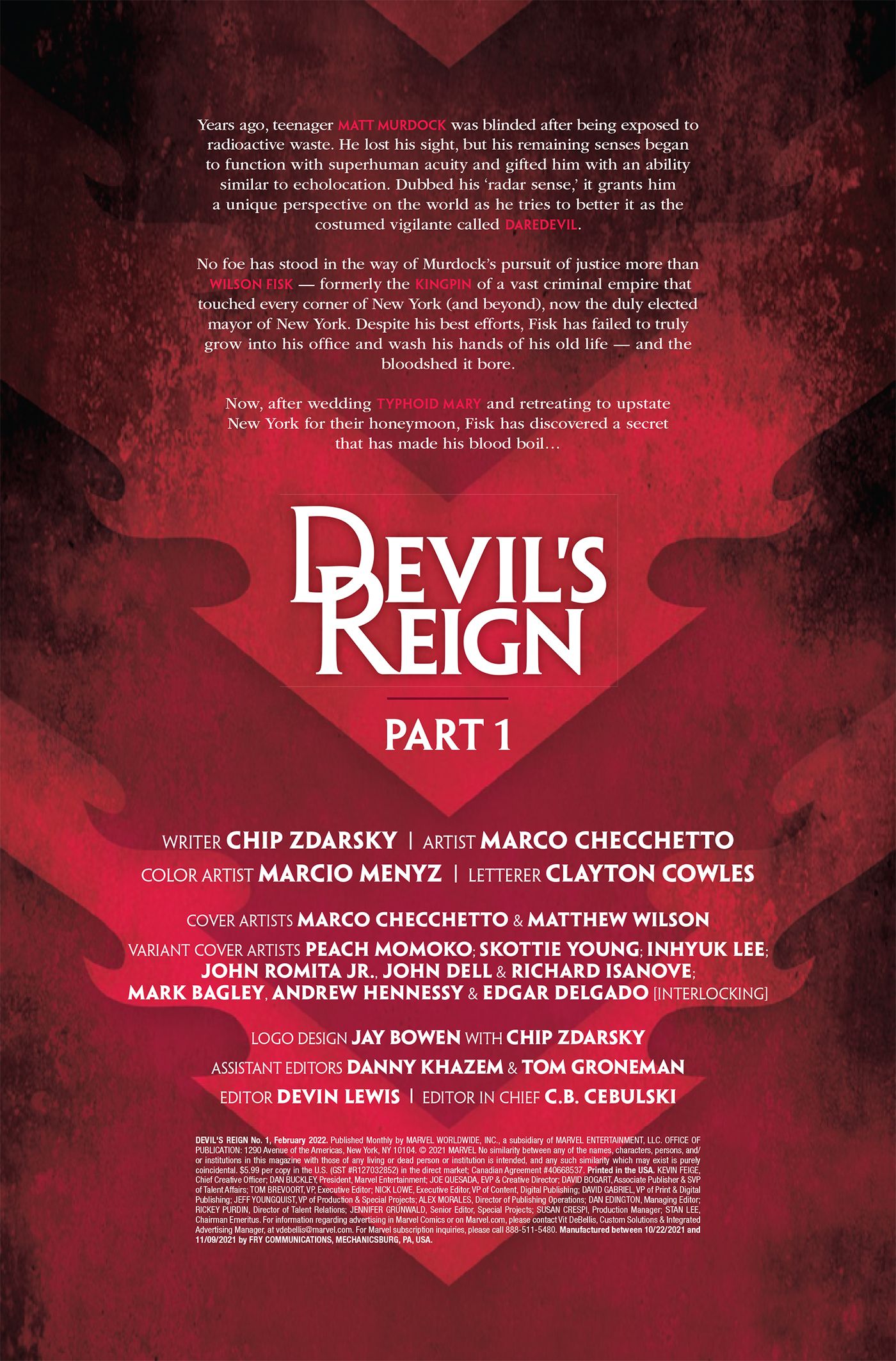 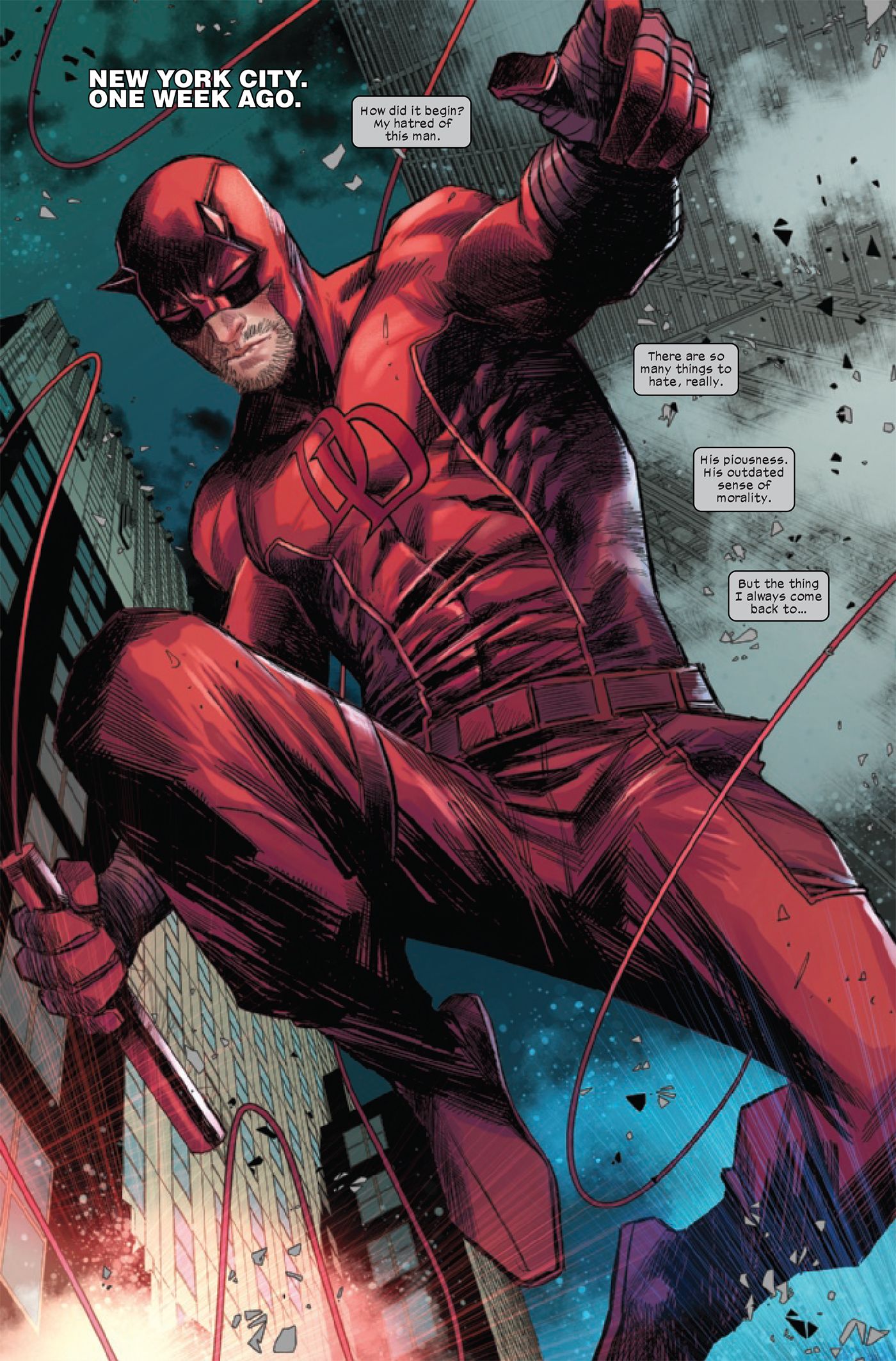 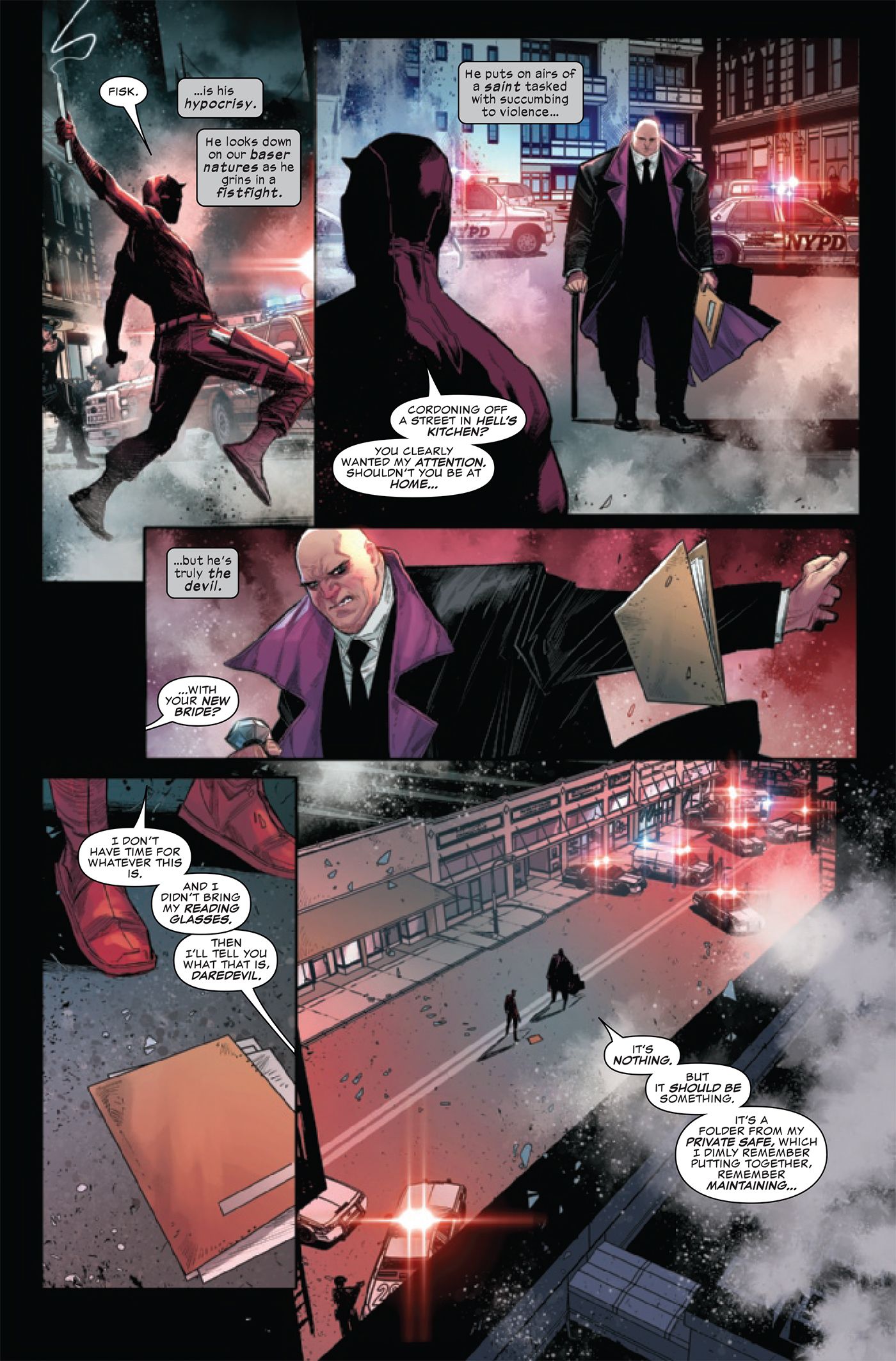 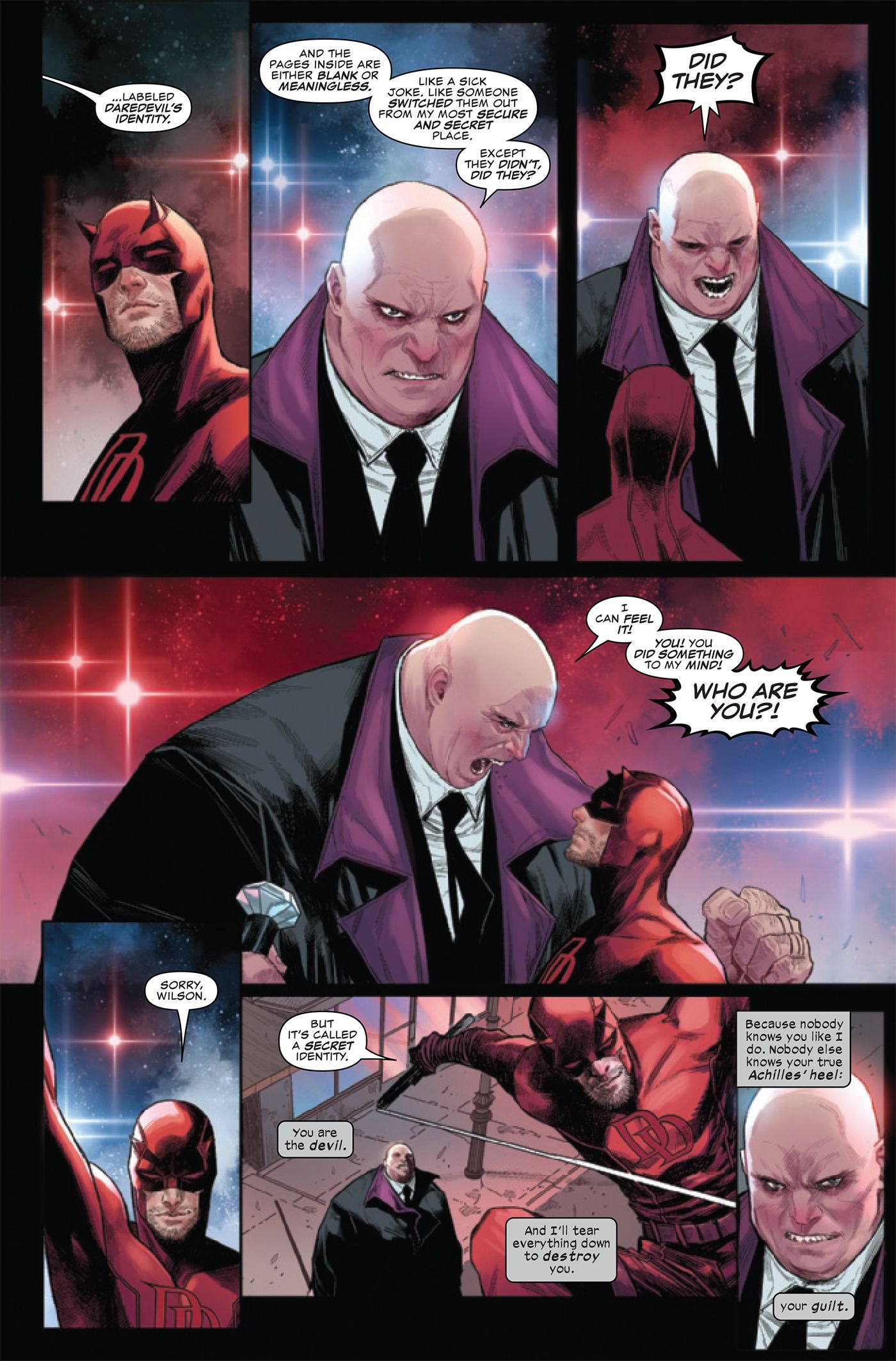 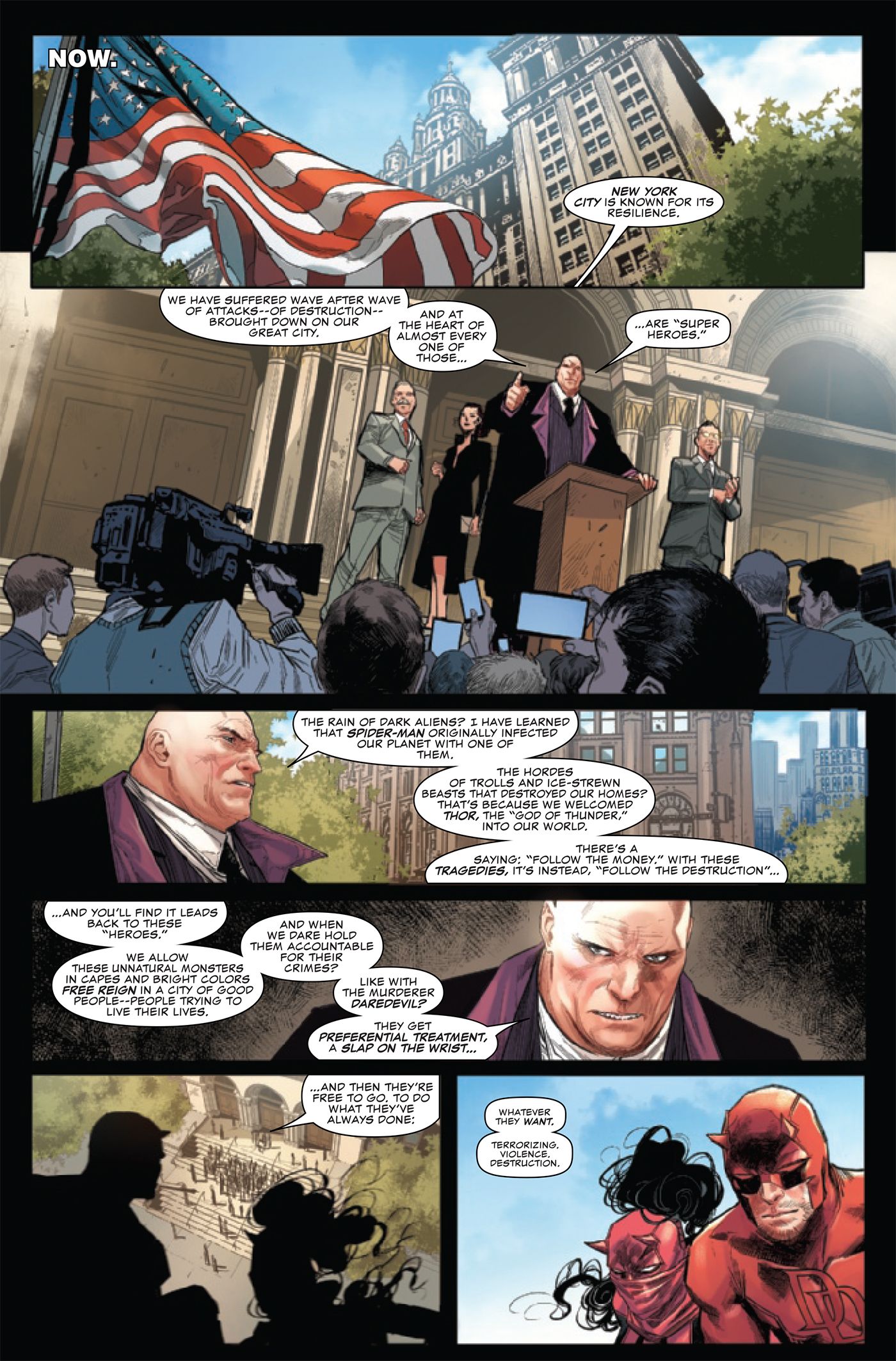 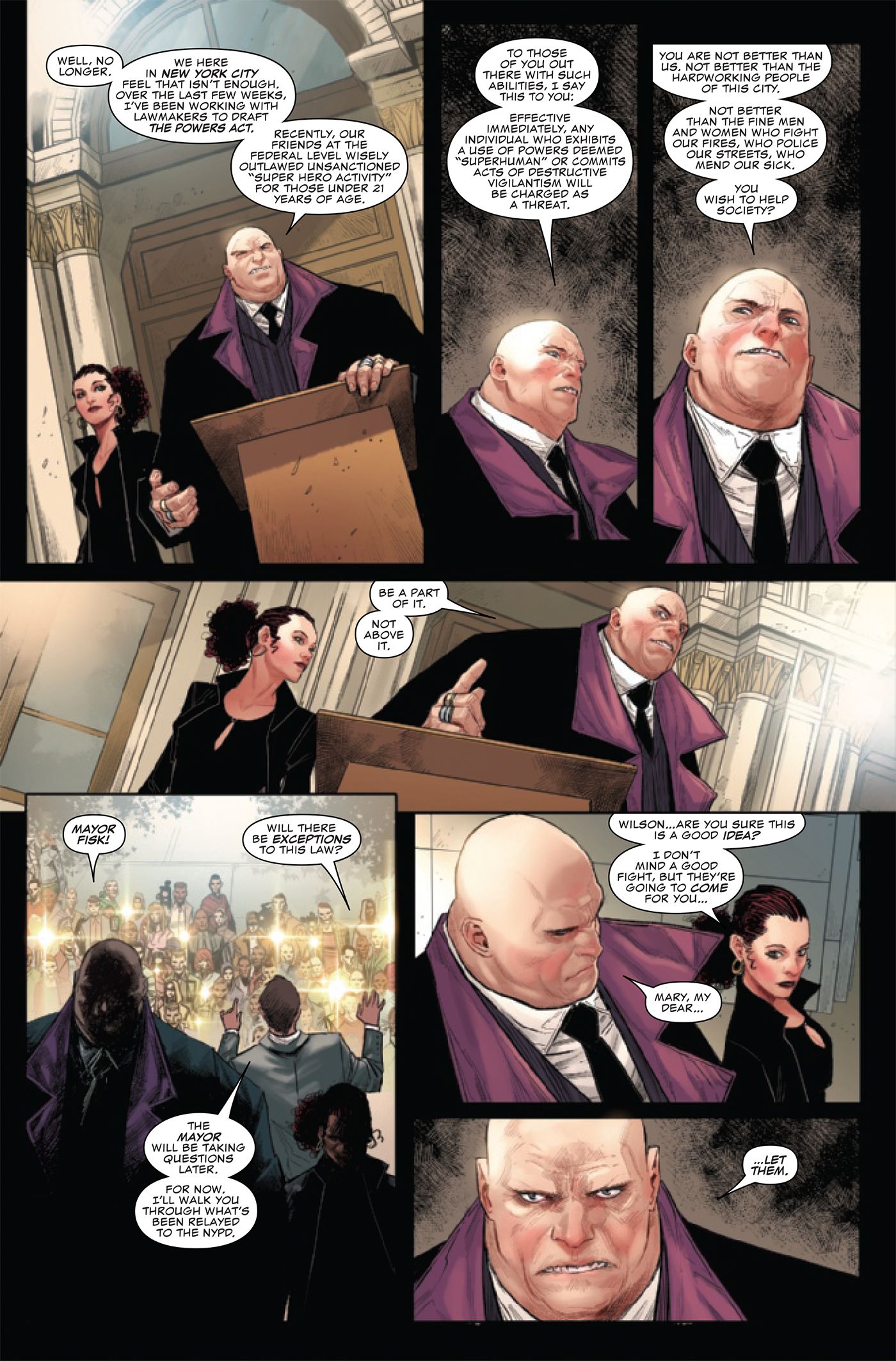 Devil’s Reign spins out of Zdarsky’s two-year run on Daredevil, which came to a finale with Issue #36. There, Kingpin married Typhoid Mary after a courtship that had slowly been building over the course of Zdarsky’s time on the book, and Matt Murdock wished Fisk well. Speaking with Elektra, Matt reasoned that if Mary could “make him content, make him want for less, close the book on his greed… maybe that’ll do the trick.”

The truce between Daredevil and Kingpin appears to be short-lived, however, as Daredevil #36 ends with Fisk rifling through his files on the Devil of Hell’s Kitchen’s secret identity. After discovering that these files are either blank or unreadable, a dark look appears on Fisk’s face, presumably leading to the events in Devil’s Reign #1. While the Kingpin previously knew Matt’s secret, he and the rest of the world forgot the details thanks to hypnosis instigated by the children of the Purple Man, as related in 2017’s Daredevil #20.

Kingpin’s anger toward superheroes has been bubbling for some time and was hinted at in a short story within August’s Free Comic Book Day: Spider-Man/Venom #1. In that issue, Fisk referred to himself as an animal who exercised extreme restraint to keep from falling into the throes of violence. Despite this bold monologue, Fisk also suffered a hallucination that showed his hands covered with blood and the corpses of various Marvel heroes — from Iron Man to Emma Frost — lying about him.

Devil’s Reign, which will run for six issues, is set to investigate what happens when Fisk finally lets loose and unleashes his full fury on the superhero community. Issue #1 goes on sale on Dec. 1 from Marvel.

KEEP READING: Why Did Daredevil Give Up His Most Potent Weapon in His War on Crime?

Andrew Garfield Jokes He Only Returned for Spider-Man: No Way Home Because of Tobey Maguire

My Hero Academia Creator Plans to End Series in One Year