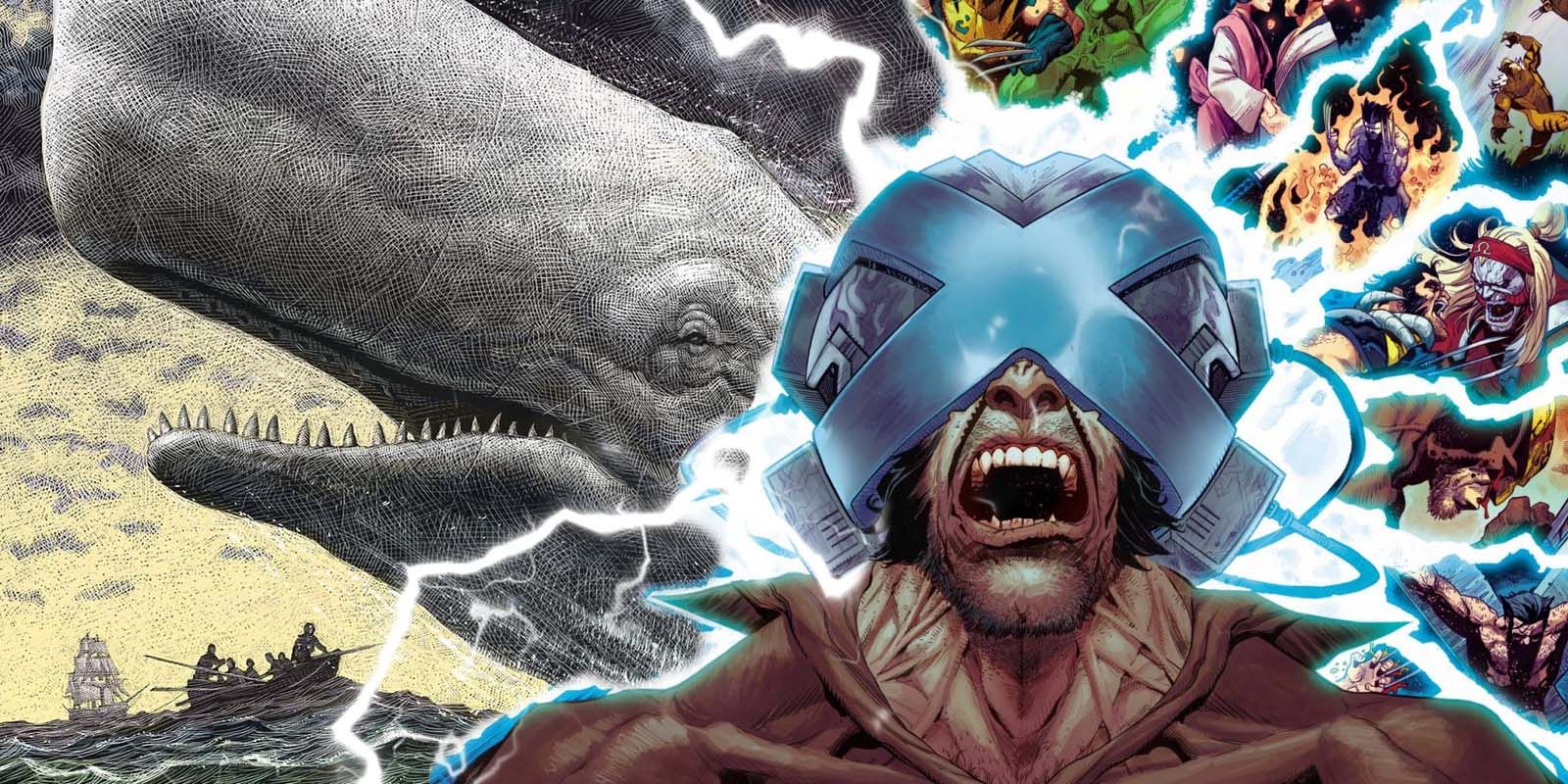 Warning: The following contains spoilers for X-Lives of Wolverine #3, on sale now from Marvel Comics.

X-Lives of Wolverine #3 (by Benjamin Percy, Joshua Cassara, Frank Martin, VC’s Cory Petit, and Tom Muller,) had Omega Red body-hopping through the past to hunt down Professor Xavier’s ancestor, Benedict Xavier, on a ship in the frozen seas—only to body-hop into a familiar great white whale itself. While the whale is not named Moby Dick, the aesthetic, timeframe, and look alluded to the great whale of the American literary canon. Emblazoned with Red’s Omega symbol, the image is haunting. Yet, this might be the clue to explain how the founder of the X-Men and its most famous members’ lives cross.

In 1900 Northern Canada, an ancestor of Professor Charles Xavier, Benedict Xavier, wars against his crew members as they are possessed by Omega Red. Seemingly vanquishing the creature inhabiting his men, Xavier and Wolverine (arriving from another direction) are surprised by a massive white whale breaking through the arctic ice sheet. Glowing red on the creature’s head is Omega Red’s distinctive crimson omega symbol, crackling as it erupts from the whale’s flesh. Omega Red has possessed the white whale.

Related: The Greatest Threat to Marvel’s X-Men is Their Past – Here’s Why 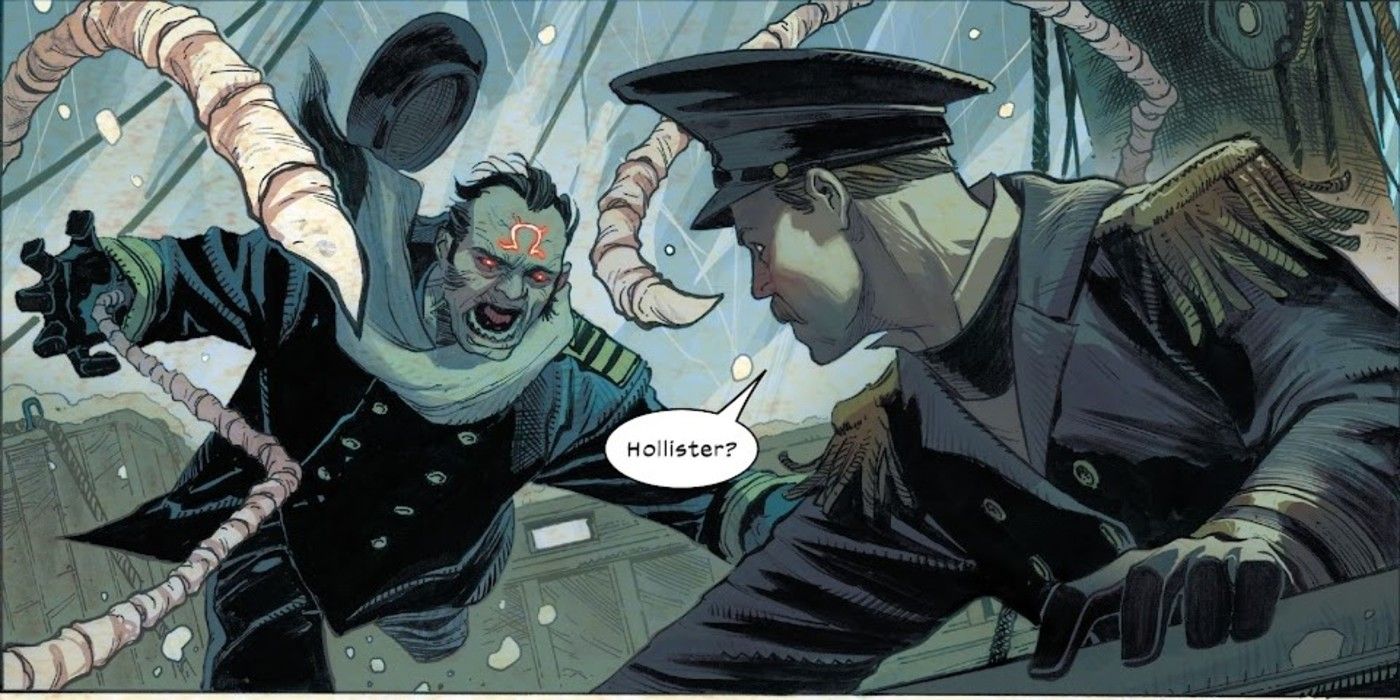 This white whale is not named, but this very moment is pulled directly from Herman Melville’s Moby-Dick: “Moby Dick moved on, still withholding from sight the full terrors of his submerged trunk, entirely hiding the wrenched hideousness of his jaw. But soon the fore part of him slowly rose from the water . . . the grand god revealed himself, sounded, and went out of sight.” That Omega Red has united his mind with this beast is in line with Melville’s intent. Moby Dick, rising from the waters, represents all that is evil and dark in the human soul.

The whale isn’t the only character that may have influence here though. The two primary characters of the novel are Ishmael, the narrator, and Captain Ahab whose passions drive the hunt from Moby-Dick. Within X Lives of Wolverine, the two characters are Wolverine through whose eyes we view the drama, and Professor Xavier, whose life and purpose are the focus of the hunt. Of the two, we are left to wonder who is Ishmael and who is Captain Ahab. The obvious answer is that Xavier is Ahab and if so, it might mean that all of Wolverine’s efforts are for nothing.

The connections seem to leap off the page: Xavier’s dreams, his ultimate pursuit for mutantkind safety and prosperity place him in the role of Captain Ahab. Yet, that placement brings with it a warning. Ahab ultimately found himself tied to the whale as it moved below the waves. He achieved his hunt and loses his life to do so.

Related: Of All of Wolverine’s Lives, He Hates One the Most 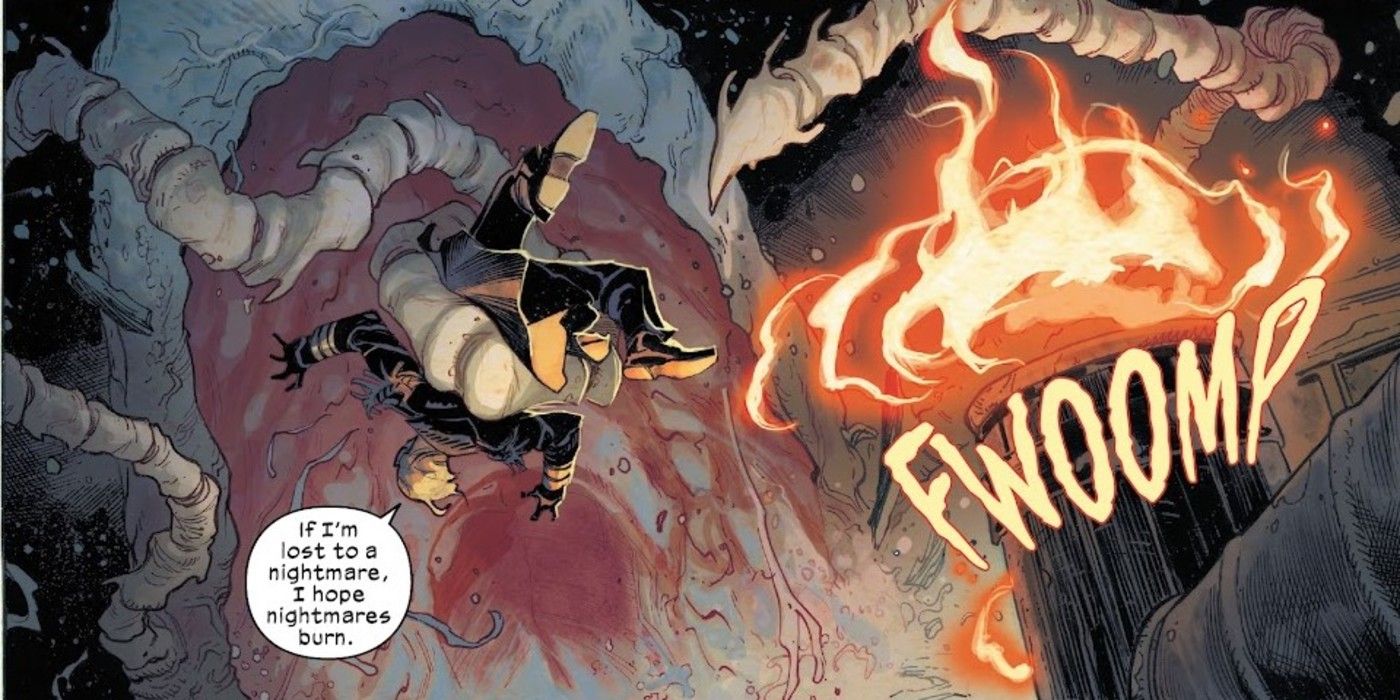 On the other hand, it is Ishmael who found himself redeemed. Ishmael entered the tale having closed the cover on one part of his life. Like Wolverine, he was a wanderer seeking redemption for an incalculable number of sins that weigh on his soul. Already, Wolverine’s actions in this series have moved him towards redemption as he explores his past in hopes of saving the future. He has repaired the wrongs of the massacre with Team X.

The final moment of the whale’s life has Wolverine and Benedict Xavier working in tandem to take down the beast. Benedict throws fire into the whale’s gullet and we see a haunting moment of the beast’s mouth opened like a hell-maw, belching fire as its red eyes glow, and Omega Red’s bone tendrils writhe. Strapped to the beast as it goes down is Wolverine whose claws are buried in it. We are left to wonder if Wolverine escaped. In this case, the interpretation leads us to wonder if Xavier’s dream will be the thing that redeems and ultimately dooms Wolverine. The foreshadowing echoes other portents throughout the X- line of titles: Krakoa is fated to be doomed and it appears more and more as if Xavier is at fault.

Keep Reading: The X-Men Start Their Own Secret War and the Fallout Could Impact Krakoa Forever

She-Hulk: Who Is Mallory Book?