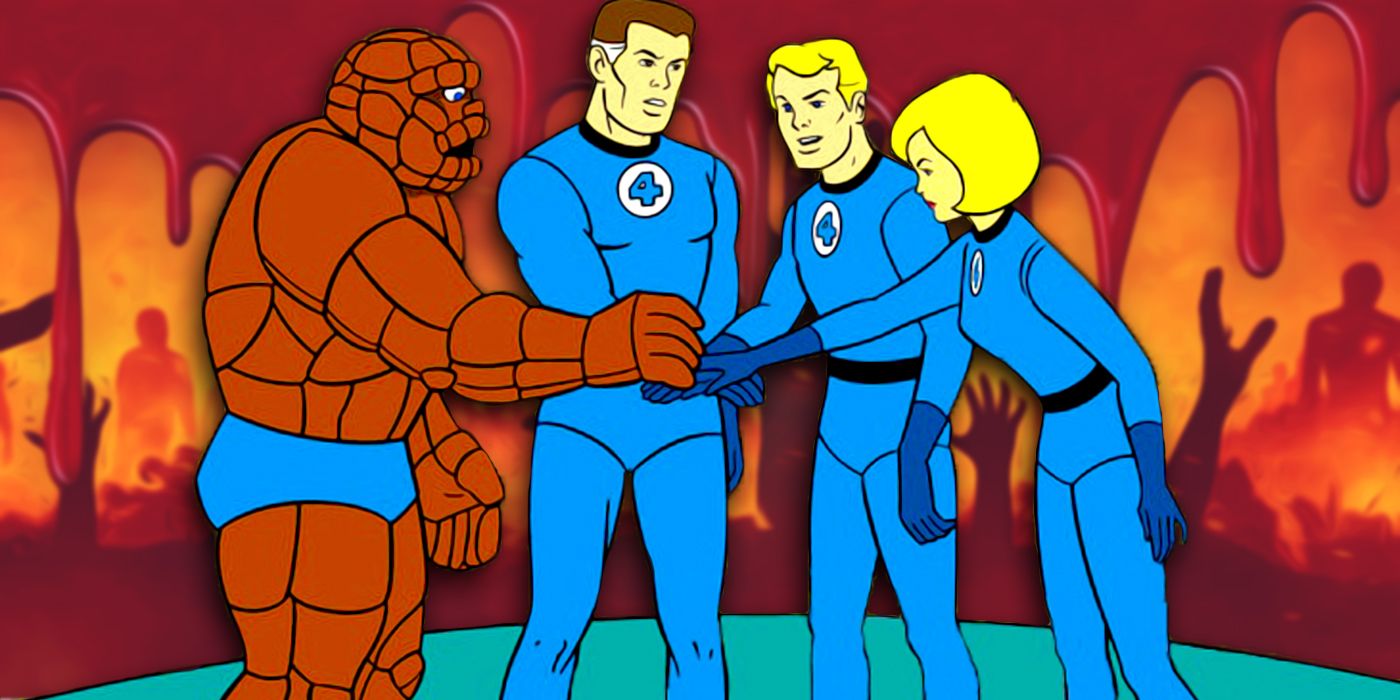 The world’s most dysfunctional superhero team-up continues their rip-roaring misadventure looking into who stole Iron Man and Mr. Fantastic’s secret patents. In the process, they’ve proven (once again) that Invisible Woman is the strongest and most dangerous member of the Fantastic Four when she defeats a Spider-man villain without lifting a single finger.

Deadpool: Invisible Touch #5 (by Gerry Duggan, Lucas Werneck, Geoffo, Rachelle Rosenberg, and Joe Sabino) shows that the normally reserved Sue Storm is the most dangerous member of the Fantastic Four as she defeats Spot with just a look.

RELATED: How a Marvel Icon’s Return Turned the FF Back Into the Fantastic Four 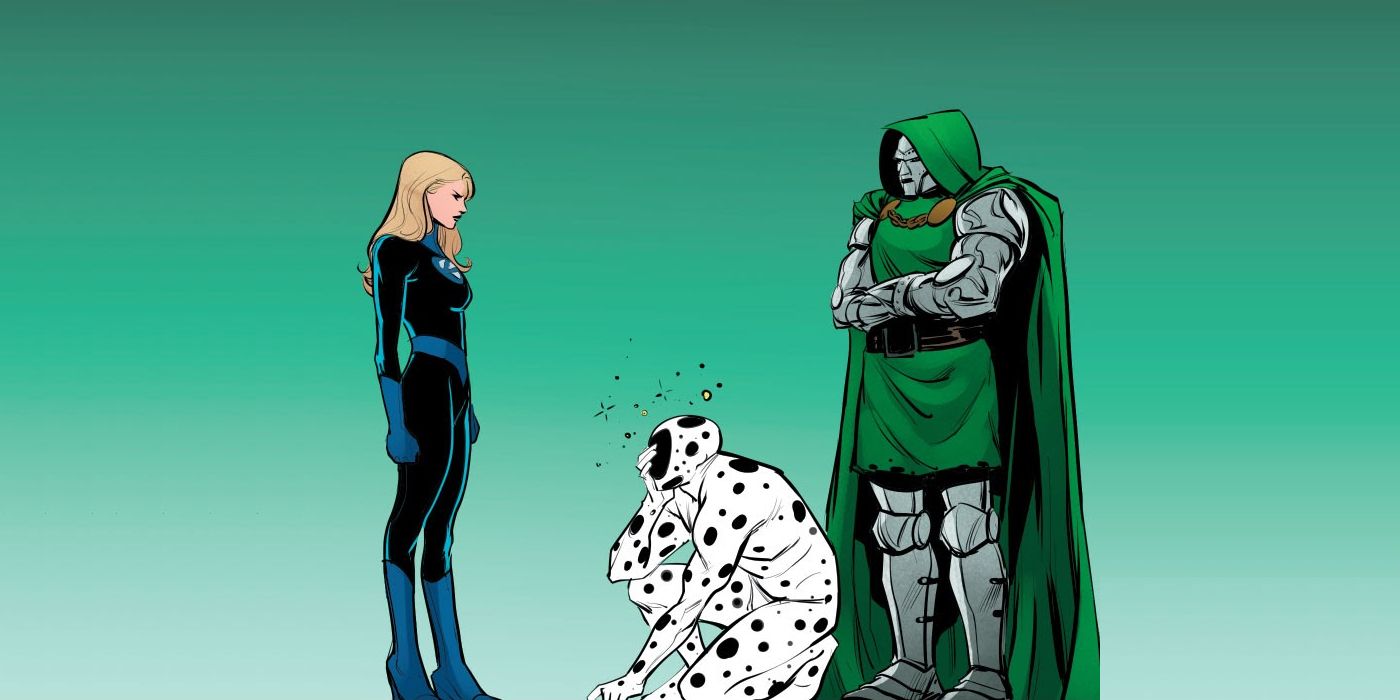 The issue opens with Spot meeting with Doctor Doom to hand him a stolen encrypted drive, only to be interrupted by Invisible Woman. Spot antagonized her and was immediately met with a startling headache. Undeterred, he continued, but the headache got worse and worse. In a now-classic move, the Invisible Woman calmly explained that she had created a tiny force-field bubble inside his nose that pushed on the most sensitive nerves in his nasal canal.

She threatened to expand it if he didn’t disappear immediately. He relented and left Doom and Invisible Alone in the warehouse. While this was only a brief preview of the full extent of her abilities, it shows that they’re far stronger than most people would think. Typically used defensively, Invisible Woman’s force fields are incredibly strong, able to survive direct physical attacks from the Hulk and telekinetic attacks from Jean Grey. But she can, and often does, use her force fields offensively. 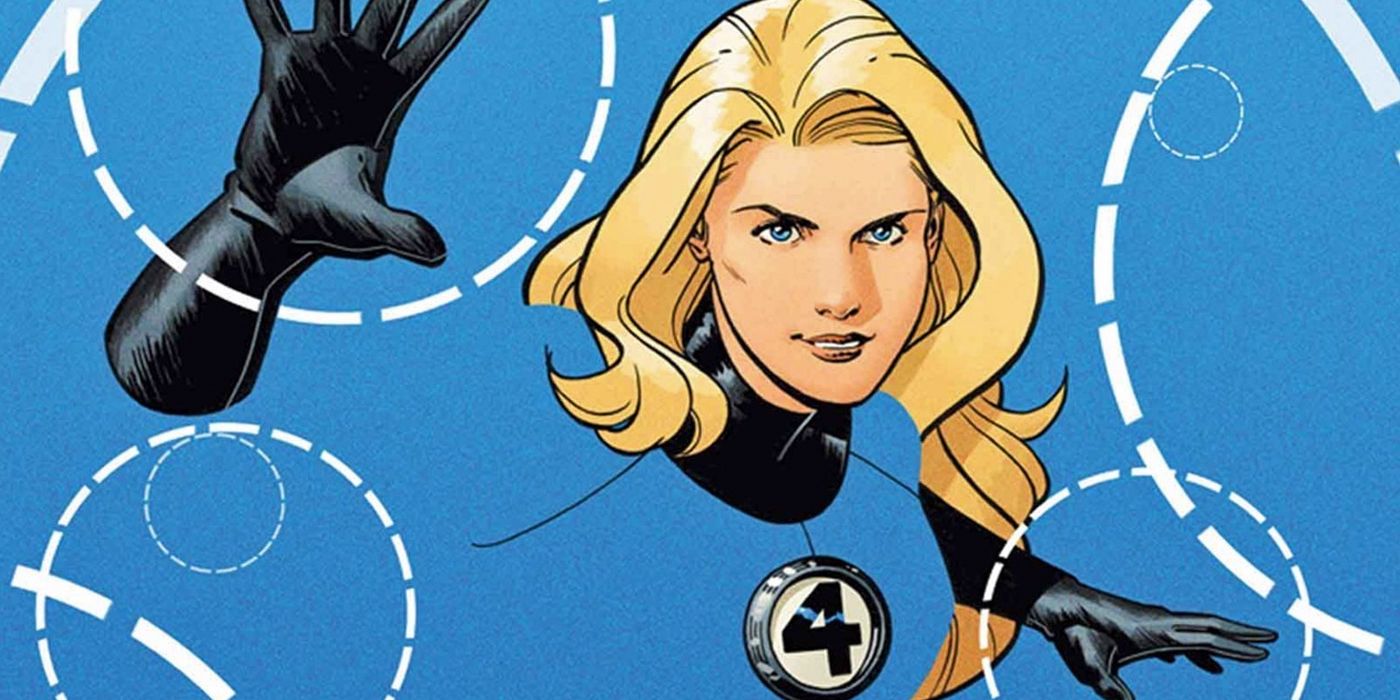 In addition to using her force fields to push on people’s nerves, she can also “shoot” them as if they were bullets and create massive shock waves capable of hurting Titania. Because of her force fields, she became one of the few living beings who have the ability to damage a Celestial’s armor. Doctor Doom himself has even claimed that she’s the strongest member of the Fantastic Four. The most dangerous use of her force fields, as she previewed in this issue, is that she can create force fields inside of people and objects, then expand them from the inside causing her target to explode. Clearly, the only thing keeping her from being one of the most dangerous heroes in the Marvel universe is her personal restraint.

Since the Fantastic Four’s debut, Invisible Woman has been somewhat sidelined in favor of other members, but recent years have seen her burst out of the sidelines as the Fantastic Four’s most dangerous and strongest member. While she’s typically calm and reserved, if she’s pushed to her limit, nothing can stop her from destroying everything in her path.

RELATED: Iron Man Unveils His Most Devious Armor – and He Didn’t Build It

When she was kidnapped by Titania, Hydro Man, and Wizard, for example, she decimated the trio and told Wizard that she could turn off his heart like a light switch if she really wanted to. The only thing that stopped her from doing so was Storm and the rest of the Fantastic Four, who were pleading that she stopped. In 2014’s Fantastic Four Annual #1 (by James Robinson, Tom Grummet, Tom Palmer, Jim Charalampidis, and Clayton Cowles), she demolished Castle Doom and tore apart Doom’s armor from the inside when she thought he had kidnapped her daughter. Sue Storm will show anybody how ruthless she can be if pushed far enough.

Invisible Woman’s diverse uses of her force fields shows that her powers are more than her name implies. In truth, her force fields offer give her an extreme amount of versatility in combat both defensively and offensively. The force fields’ aggressive capabilities represent the hidden ruthlessness that lies inside Sue Storm, which she only brings out when her patience has worn thin. Even though she’s the calmest member of the Fantastic Four, she’s also the most fearsome, capable of tearing down everything that stands in her way.

A Classic Batman Villain Desperately Wants a Second Chance- But Can He Be Trusted?