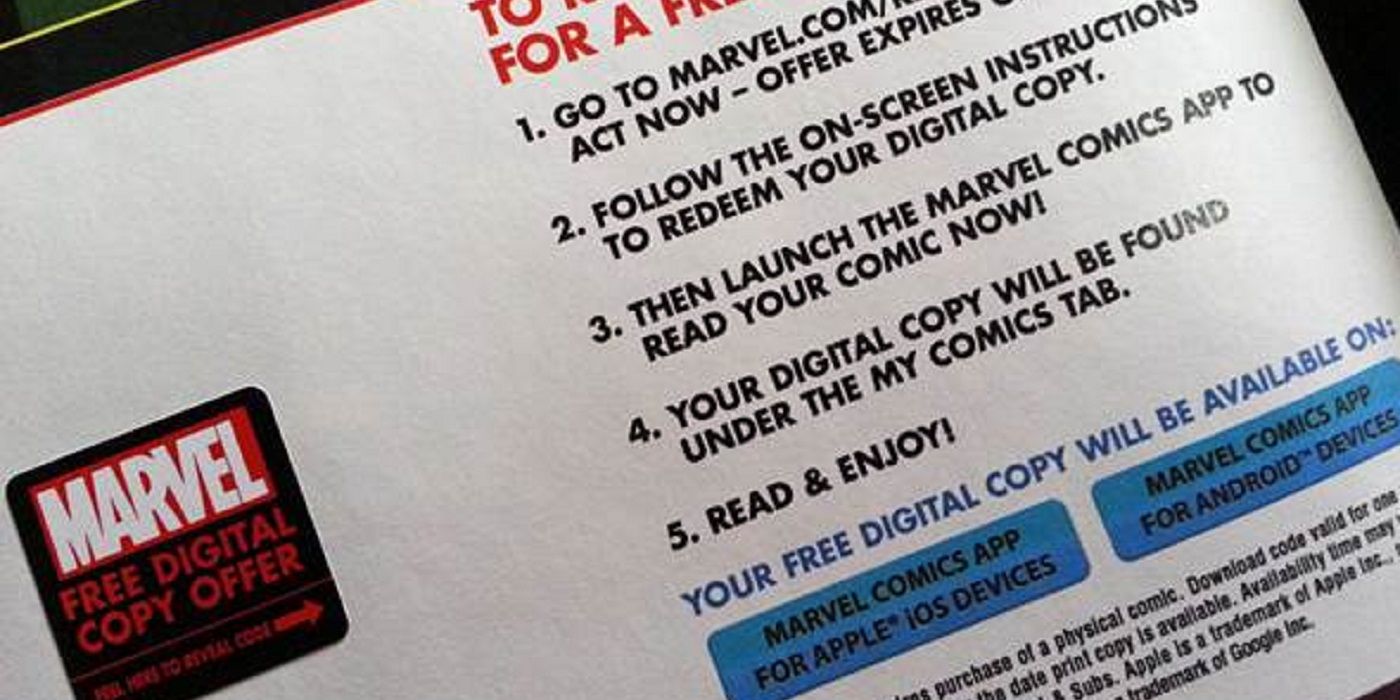 Readers were taken aback this week when Marvel’s new releases did not include the traditional stickers in them that can be removed to reveal a special code that can be used to redeem a digital copy of the issue online using the Marvel Comics app. When someone inquired with Marvel as to whether it was simply a printing error, a Marvel representative revealed that it was not.

The representative explained, “Hi, Chris. It’s not a misprint, but a process update. Please follow the instructions on that code page, they will tell you step-by-step how to get codes for your comics, and any other details you need to know. Thanks!”

This, of course, is a major change for Marvel, as the codes have been a regular part of Marvel’s new print releases since March 2012, when any $3.99 Marvel comic began to include a code that could be redeemed for a digital copy of the comic (the setup began in 2011 with Marvel’s Ultimate comics line. At the time, the comics were polybagged to protect the code but soon it came with a sticker that needed to be peeled off to reveal the code, as retailers were not fans of the polybag system).

Marvel had previously altered the system back in January 2017, when the codes were replaced with new codes for the first chapter of a prominent trade paperback. At the time, Marvel announced, “Marvel is continuing our commitment by offering our fans the best value in comics along with honoring our cornerstone of the comic book industry – the retailers. Our intent in evolving our digital code program is to offer our fans more value per dollar spent. Replacing the free digital copy, our bonus digital comics will offer fans free entry points for current on sale collected editions and, in turn, invite additional and repeat traffic into our trusted retailers.”

That did not go over well with fans, and the codes were back by March, with Marvel stating, “We heard the message loud and clear on Digital same issue codes. We heard how folks across the world were using them, relying on them, loving them. We are always looking to do what’s best for fans and the comics industry so we’re pleased to make this program even better. Now, print comics readers will receive a code for the issue they purchased, and also an additional bonus comic giving customers even more value for their purchase.”

If customers just have to go through a different system to get the same digital copies, this is not that significant, but fans are naturally wondering whether this is the first step towards once again stopping the digital redemption program.

KEEP READING: Scott Snyder Explains Why Print and Digital Shouldn’t Compete With One Another

Among Us Is Adding New Scream Skins Soon